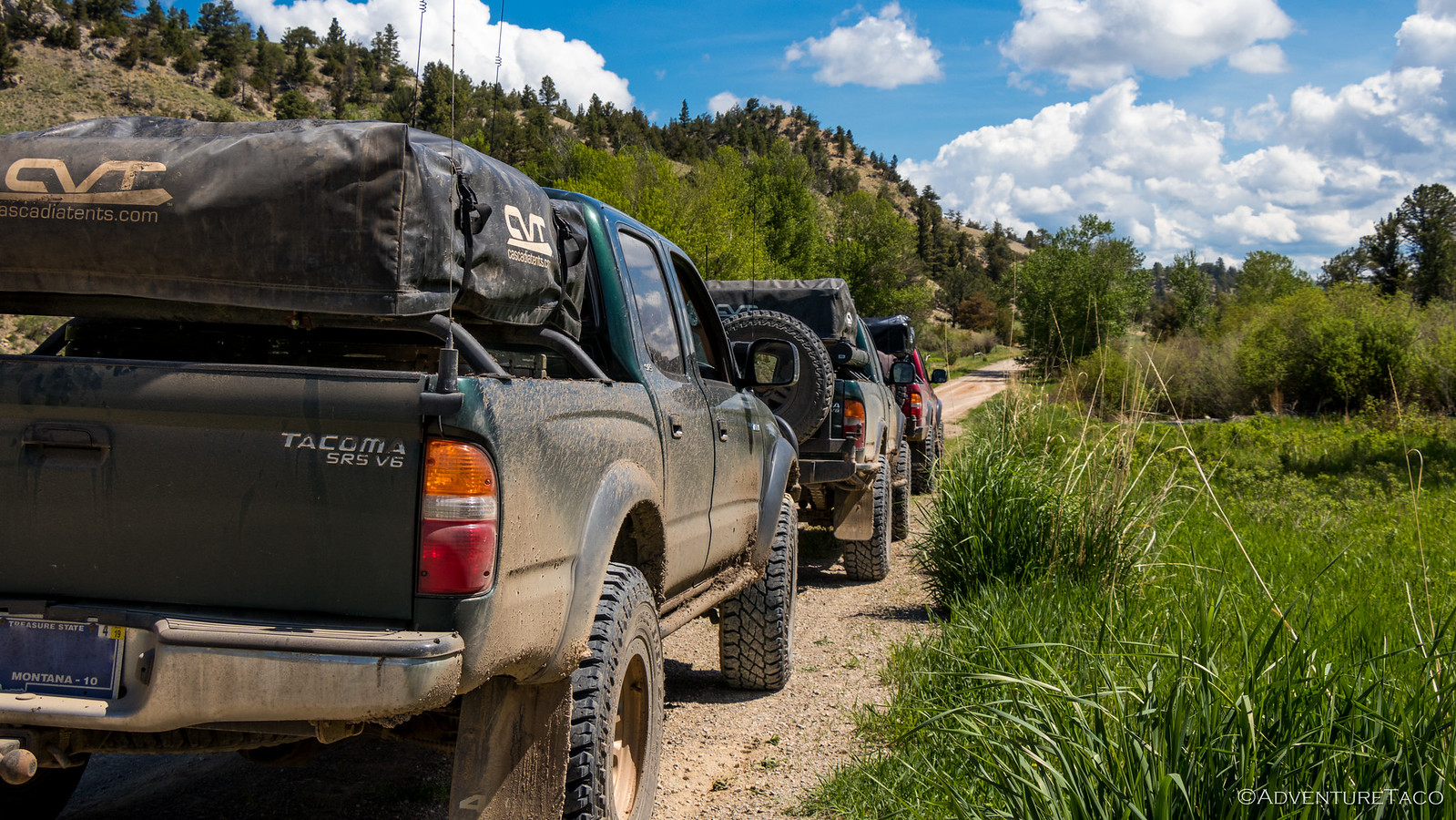 And Then There Were Three | Montana in May #3

By the next morning the storm had passed and the sun was trying to punch through the clouds on the horizon. That meant there was no beautiful sunrise, but that didn't keep me from rolling out of the tent to capture the first daylight shots of our three trucks in camp. 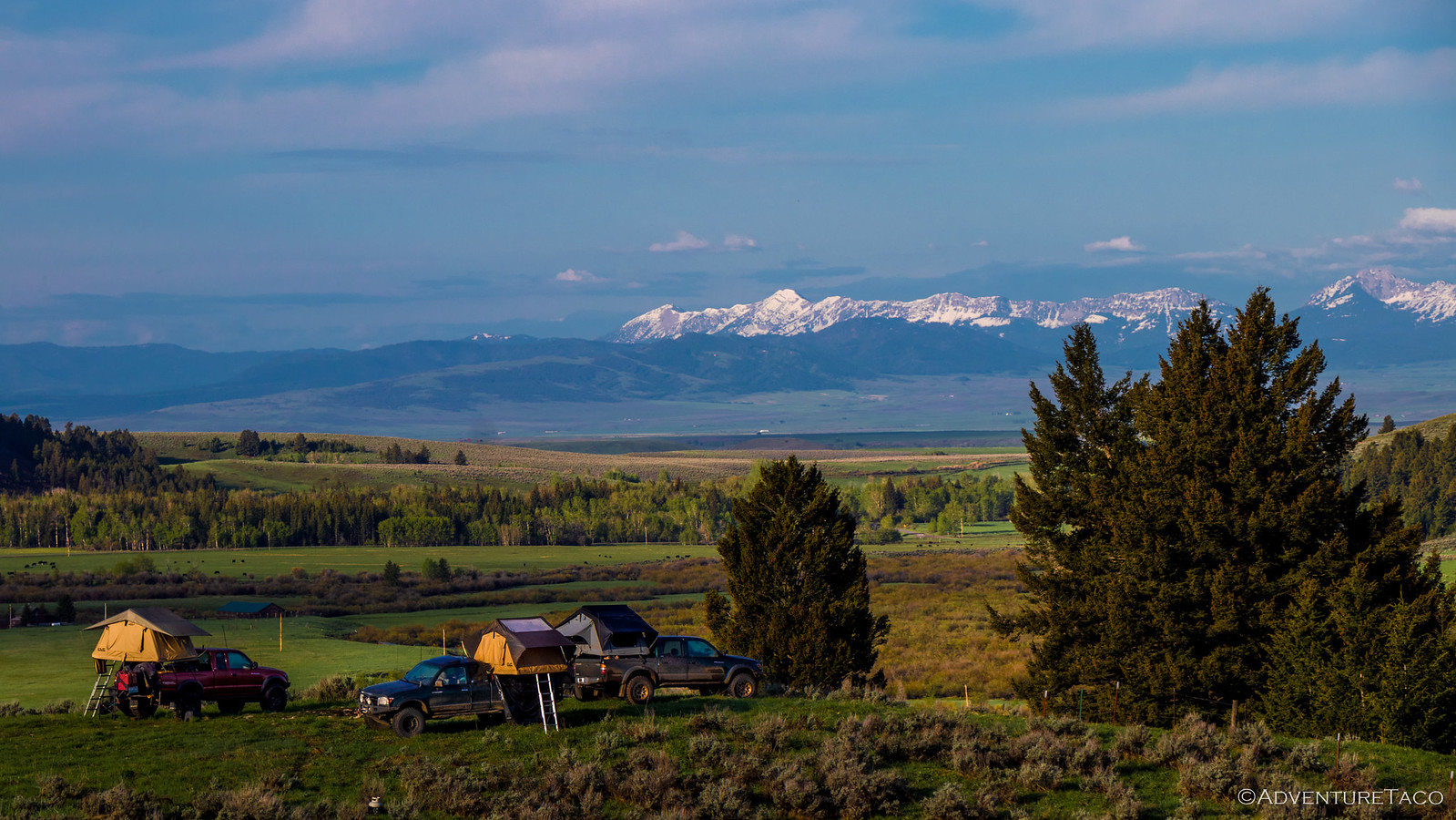 @mrs.turbodb and Mike (@Digiratus) were the next two out of bed and as Mike made his morning cup of coffee, he looked out at the mountains across the meadow and voiced his approval of the site - the Redhead obviously right at home. 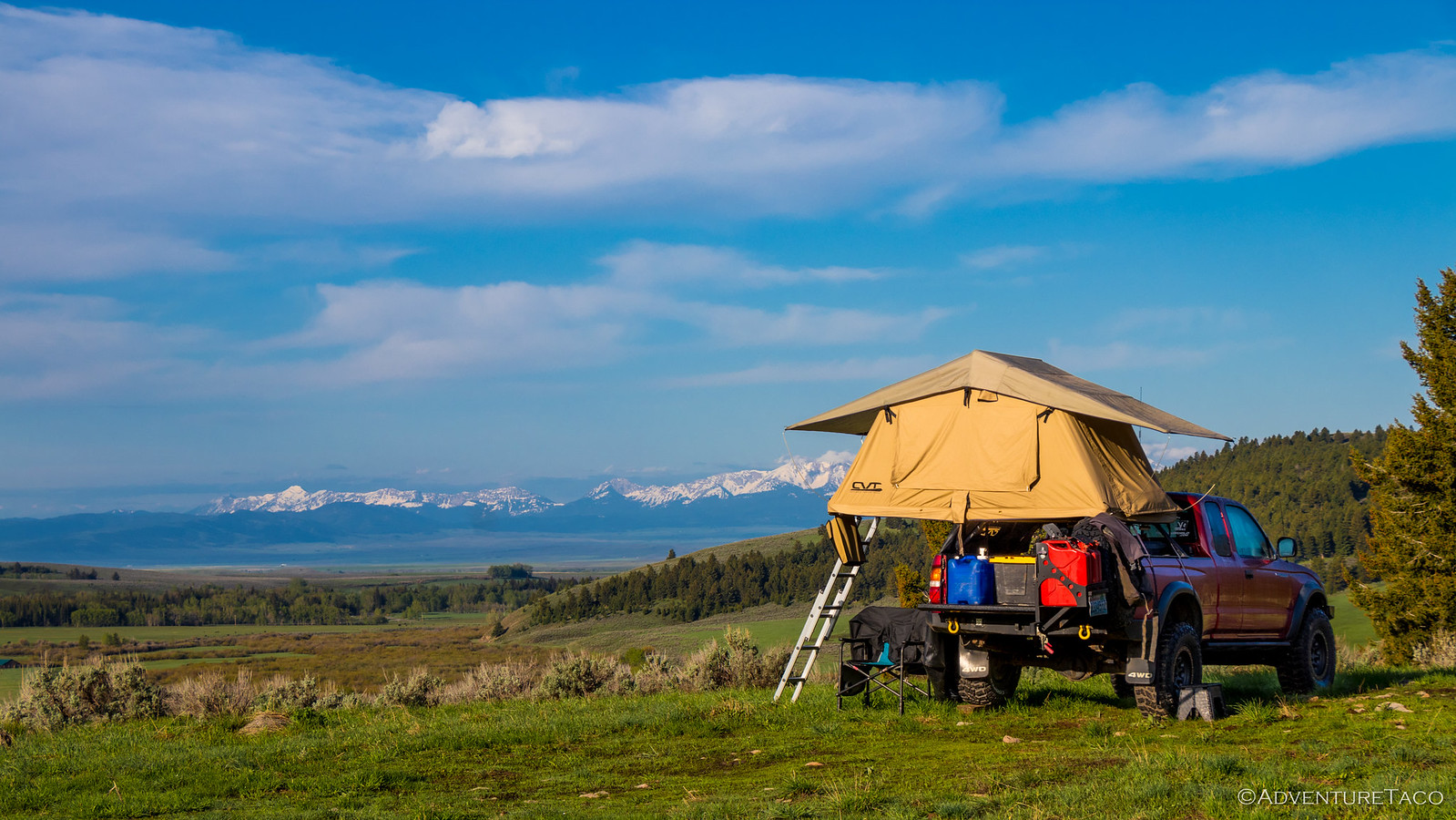 Not long after, Monte and Devin (@Blackdawg, @MissBlackdawg) were our of their tent as well, and we all enjoyed our respective breakfasts and discussed the plan for the day. Whereas previous trips had been filled to the max with driving and technical terrain, our plan for the next two days - our first two together of the season - was to take it easy exploring, and maximize campfire time. So we packed up the tents and headed north, along the Smith River Backcountry Route.

As we rolled along, chatting on the CB about everything and yet nothing in particular, we all got a good laugh when Monte said, "It sure is strange having the least built truck on the trip." 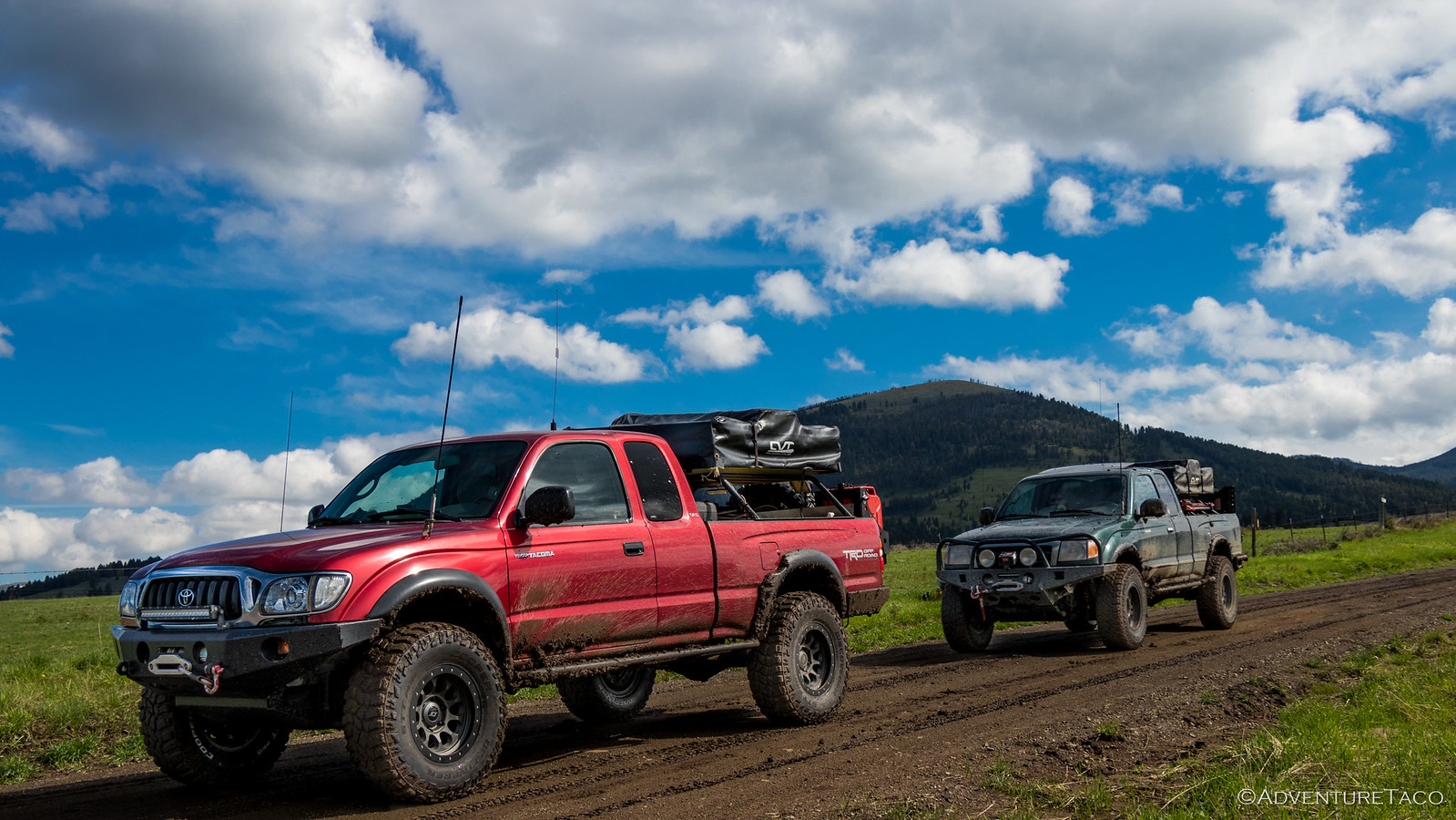 It wasn't long before our leisurely pace slowed down even more - at least for a short time - due to "dinner on the road." Of course, we'd all packed meals already so there was no need to take one of these home - which the cowboys on ATVs, herding their cows along the highway, probably appreciated. 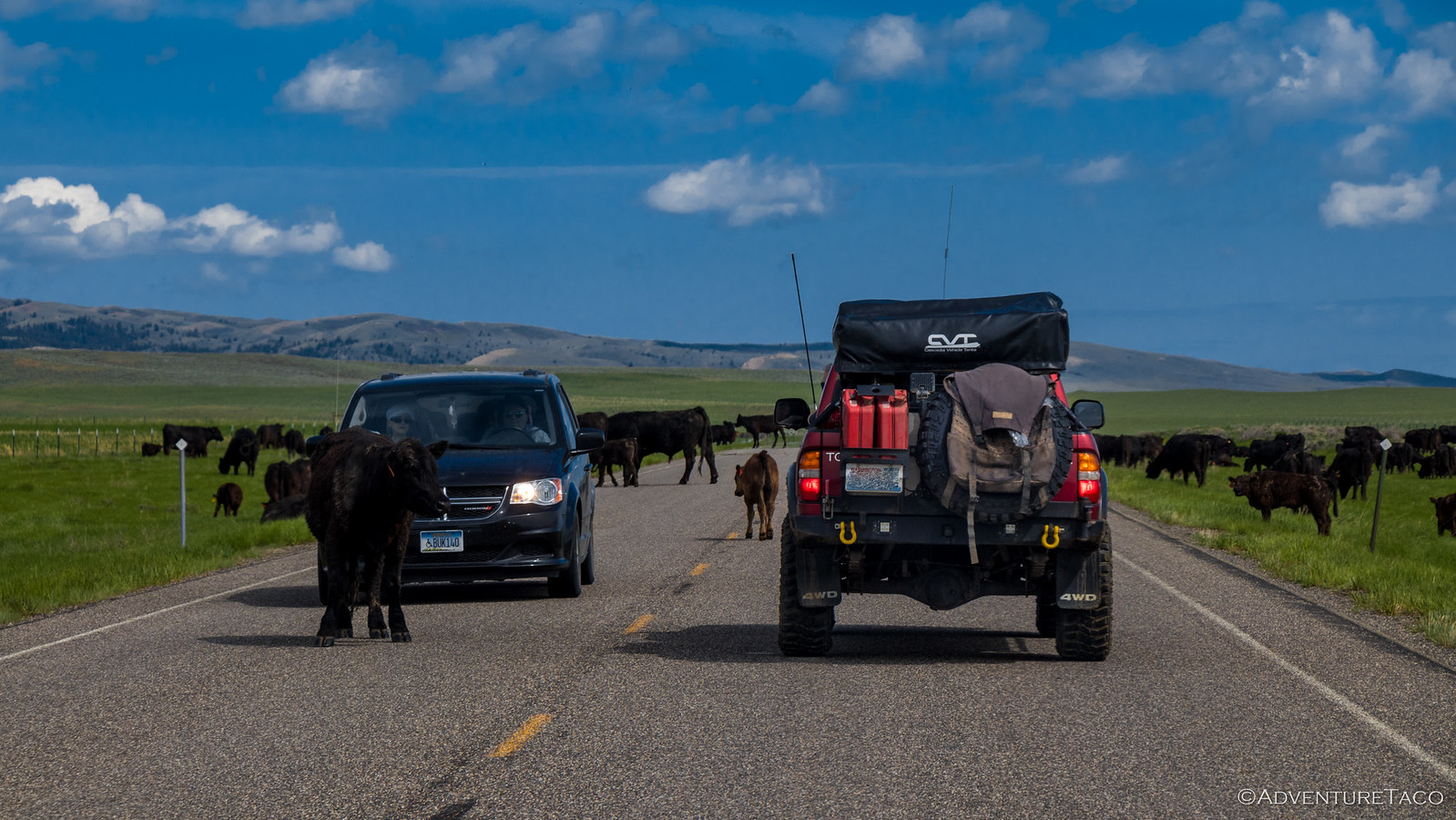 We hit dirt - or at least gravel - shortly thereafter and made a few stops to enjoy our surroundings and snap a few photos. Eventually we found ourselves next to a babbling brook and fortuitously turned off our engines. As we headed down to the creek for photos we got to talking about the fleeting beauty around us - hills that were golden or brown for most of the year were in full display; wildflowers blooming. And there was an amazing tree, chewed most of the way through by a beaver, but still standing tall. 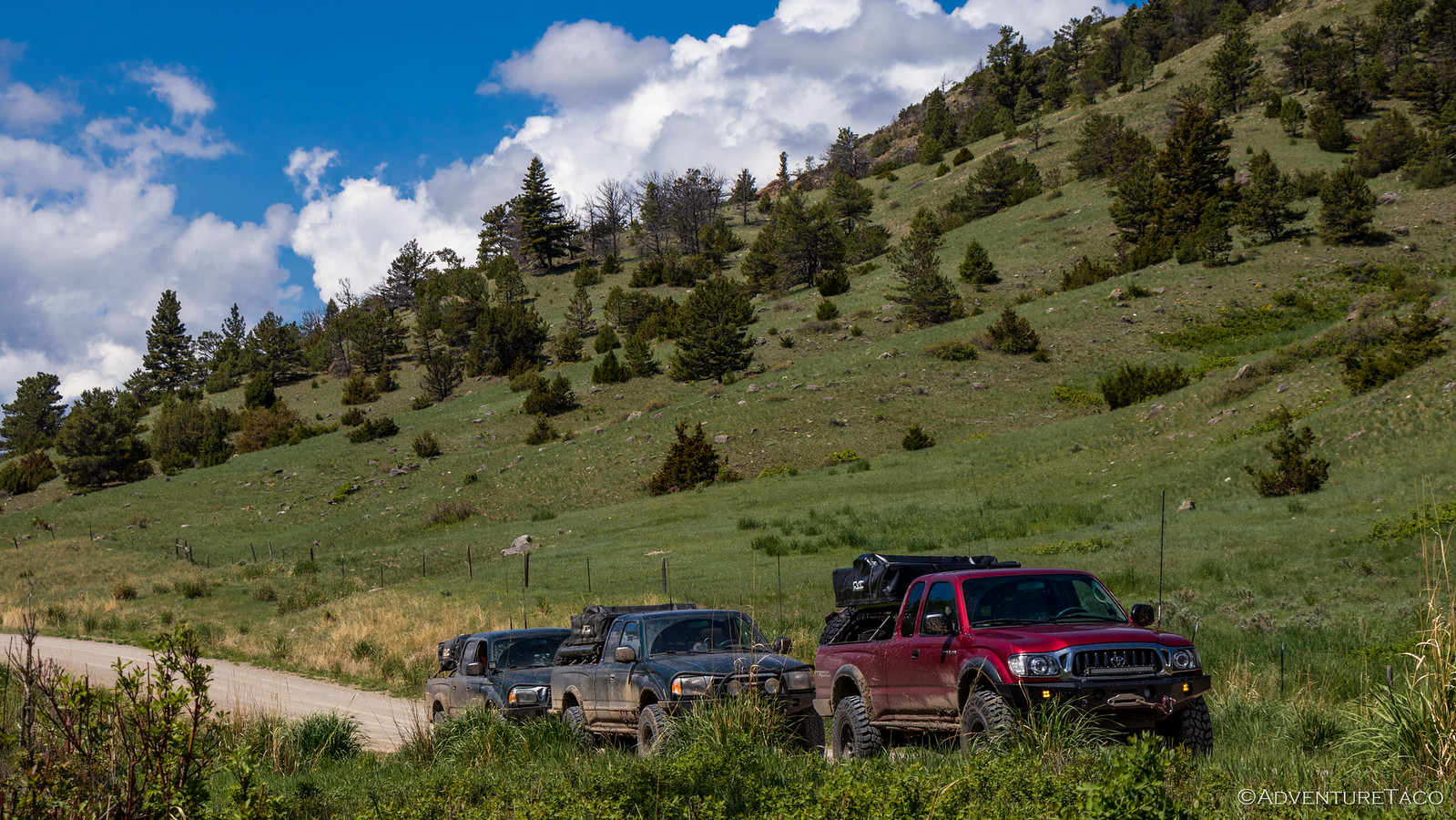 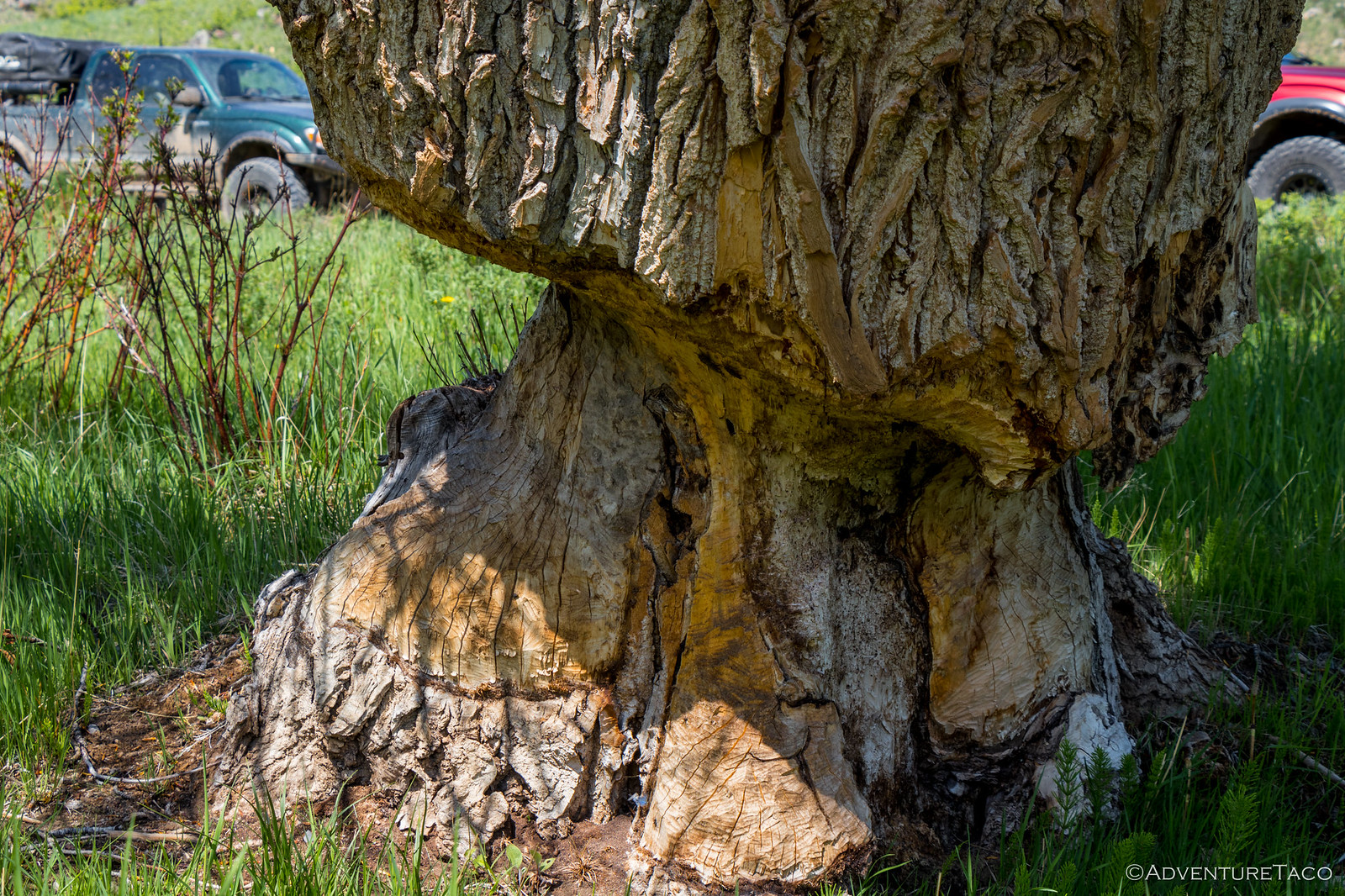 It was at this point that Mike started telling us how he and his sister had gone mushroom hunting for morels, and how he'd never see them until he was right on top of them, his sister better at sniffing them out as it were. As he told the story, Monte and Devin had wondered off - some 50 feet away and were busy ducking down into the tall grass, seemingly picking something off the ground. As the rest of us headed over, it became clear - they'd found a stash of morel mushrooms! 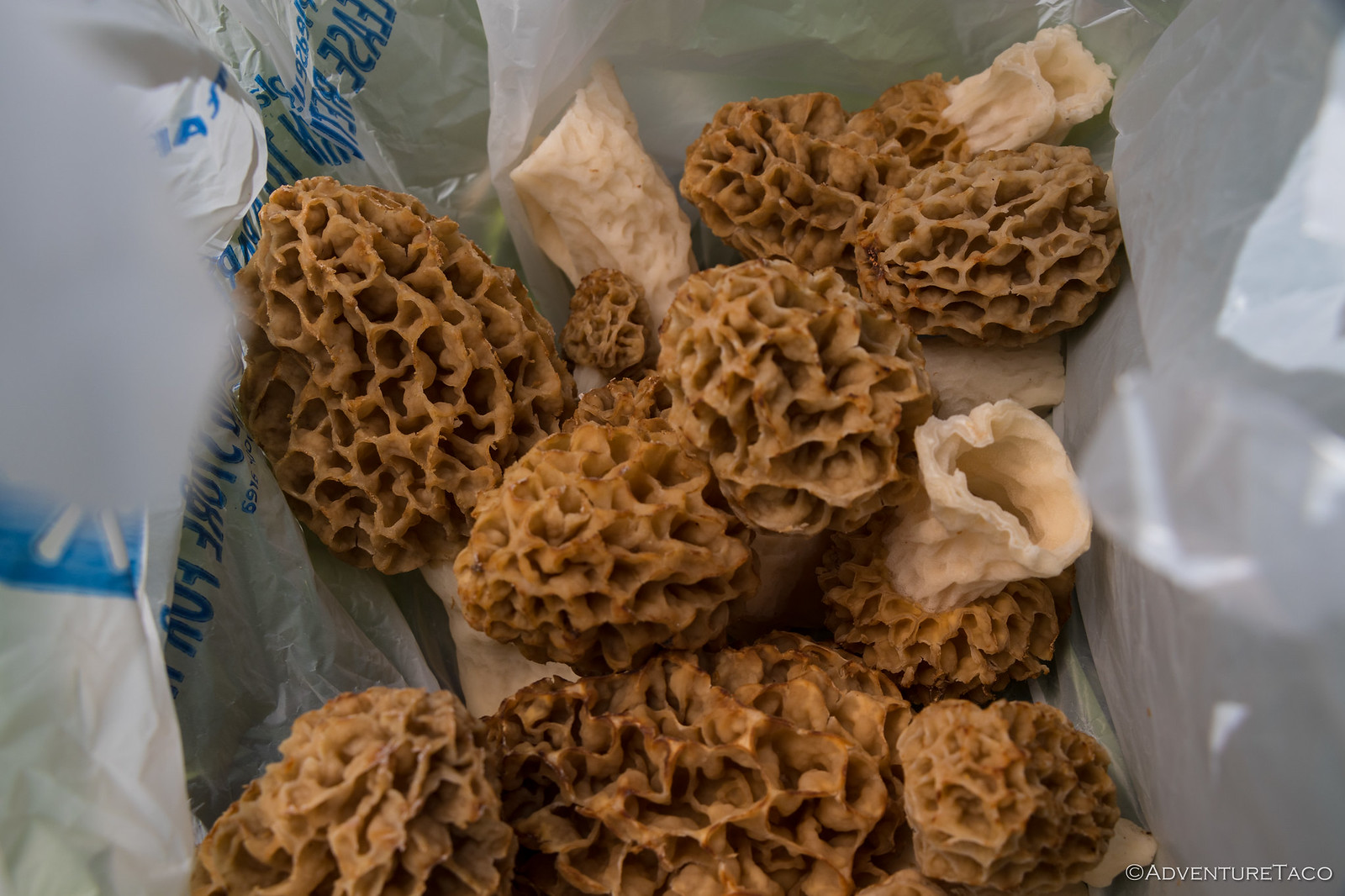 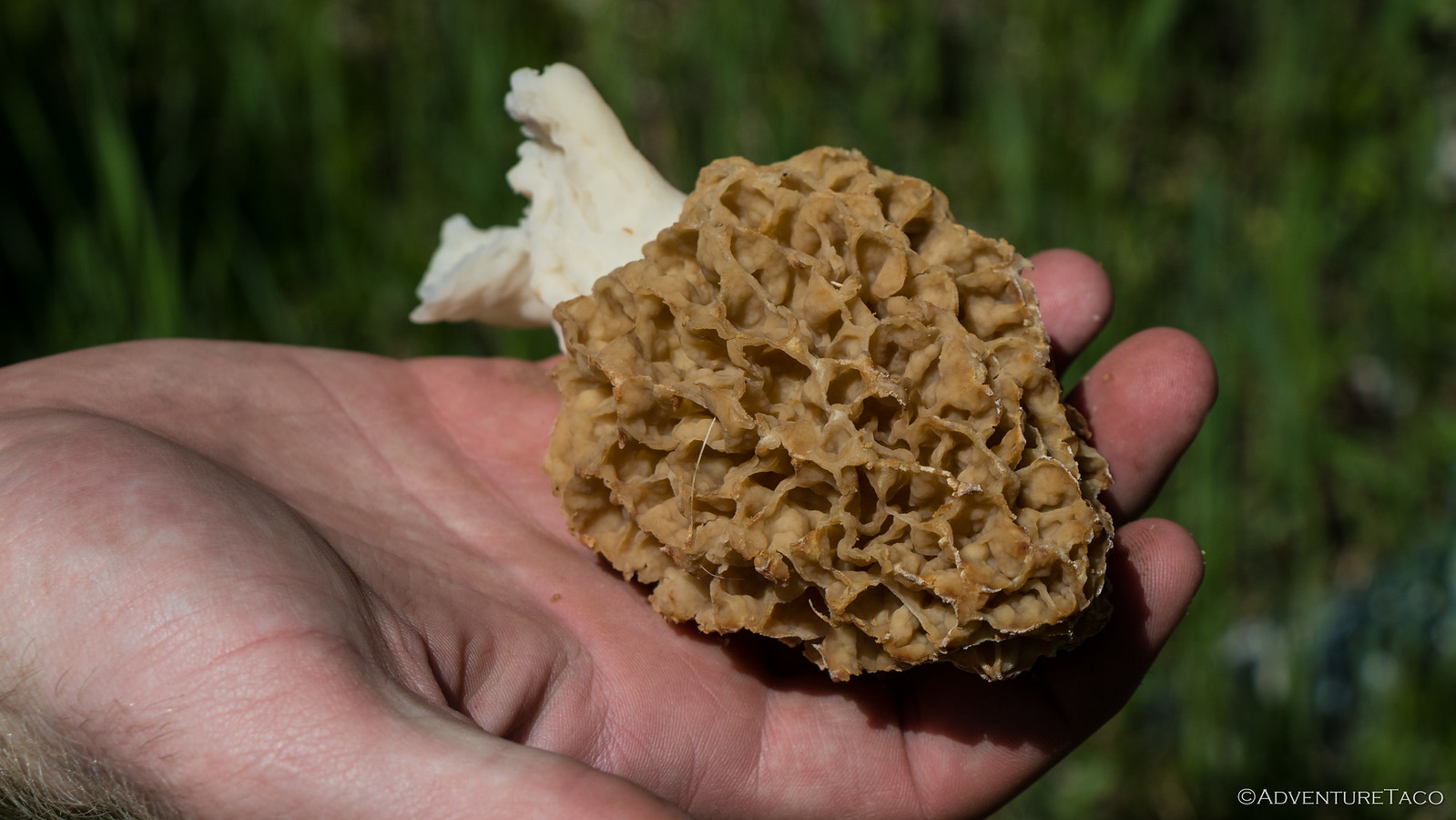 We spent the next half hour picking morels - filling a bag with nearly two pounds of the tasty buggers - unsure how we'd cook them, but happy to have that problem in the first place! 😀 And then we were back on the road, enjoying our way toward lunch. Up and over low hills, through valleys green with spring. 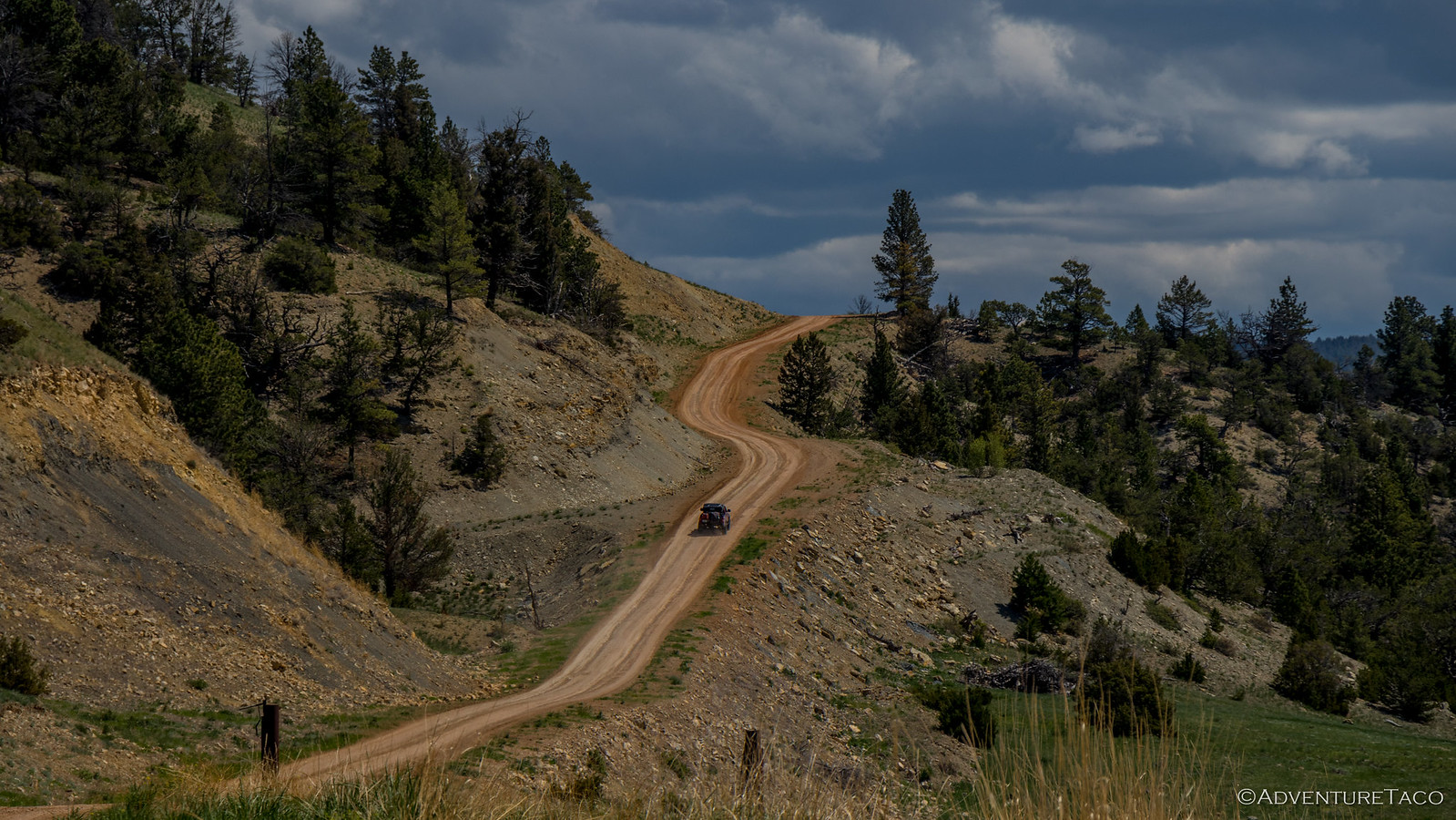 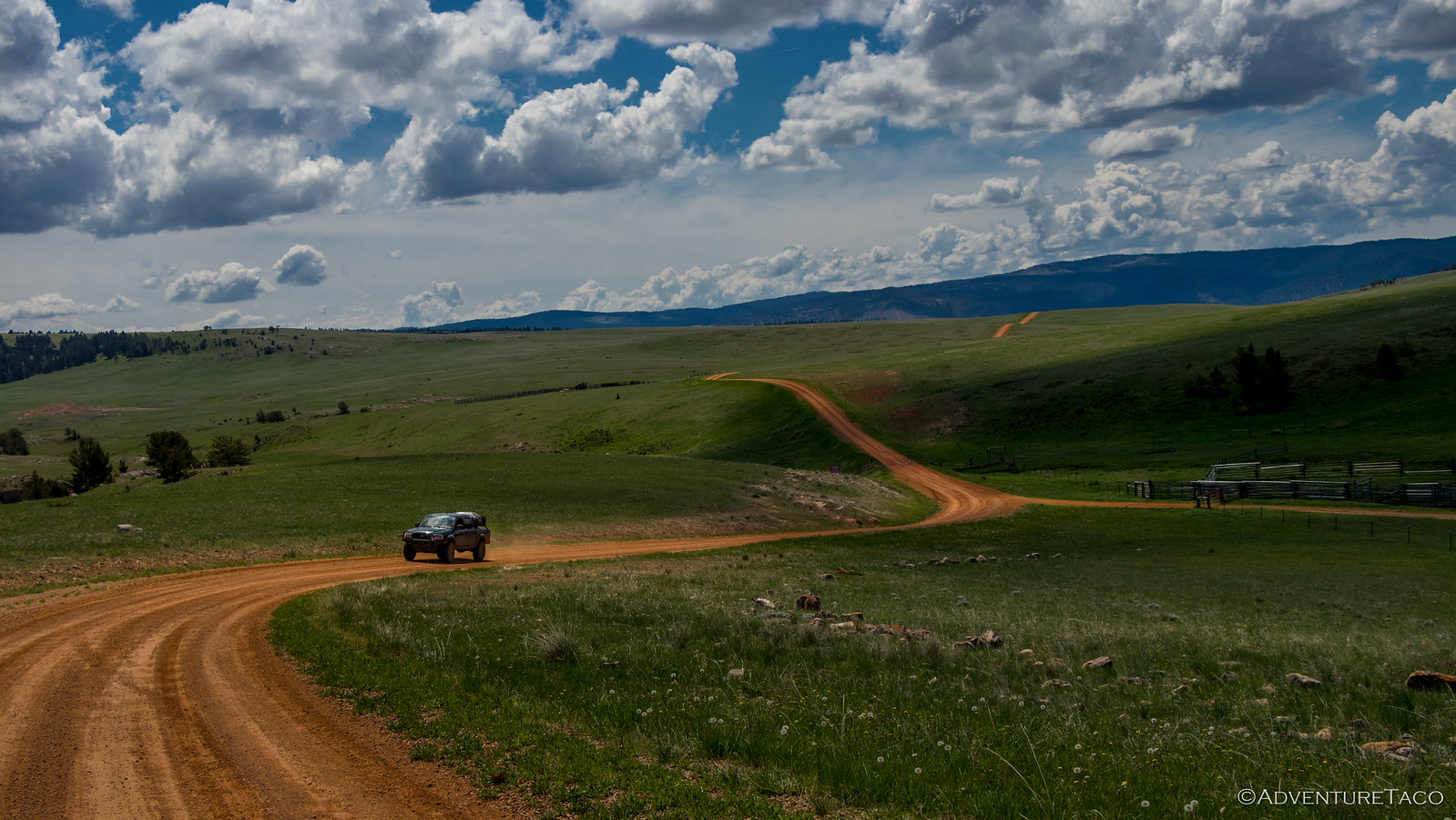 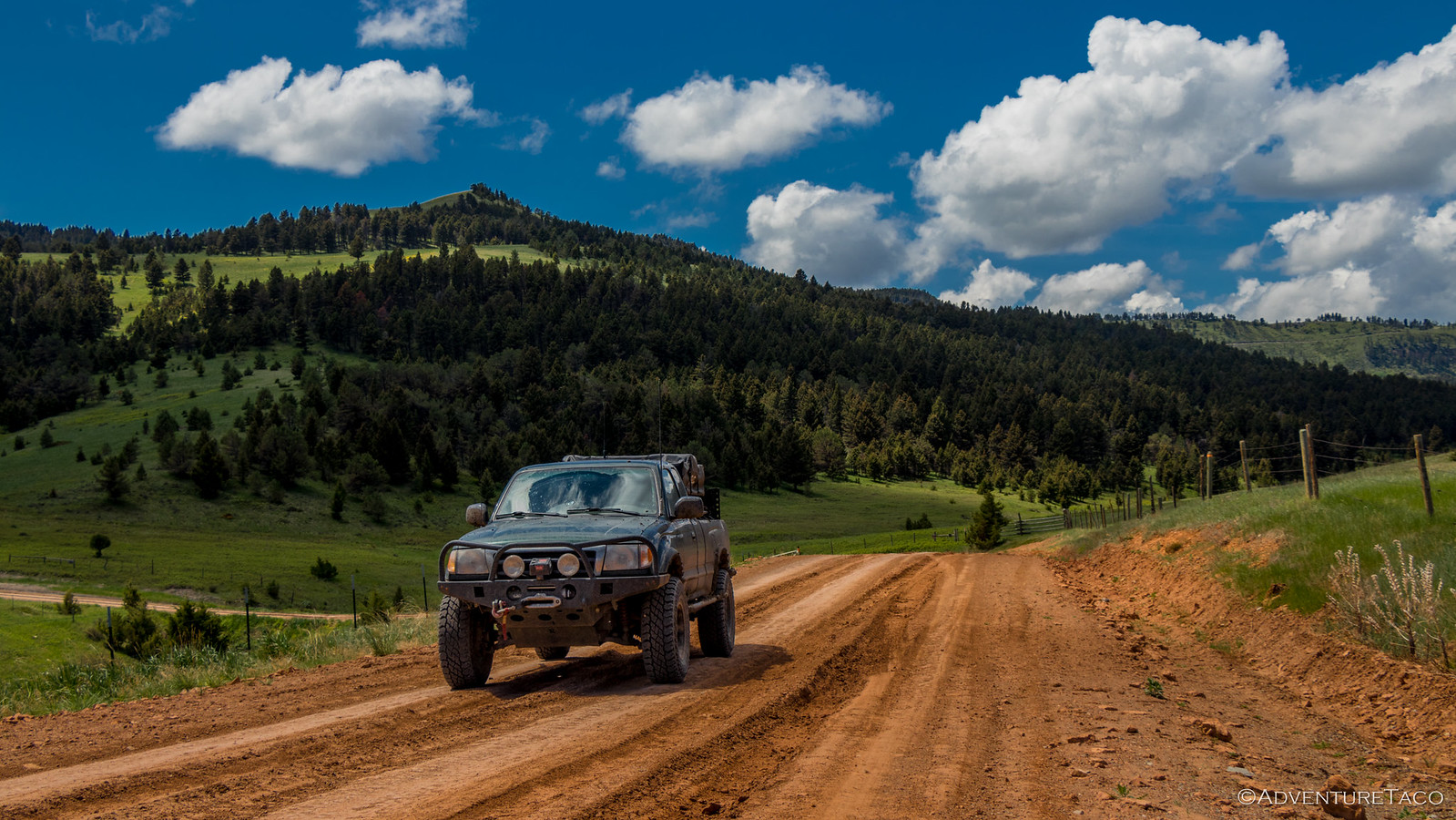 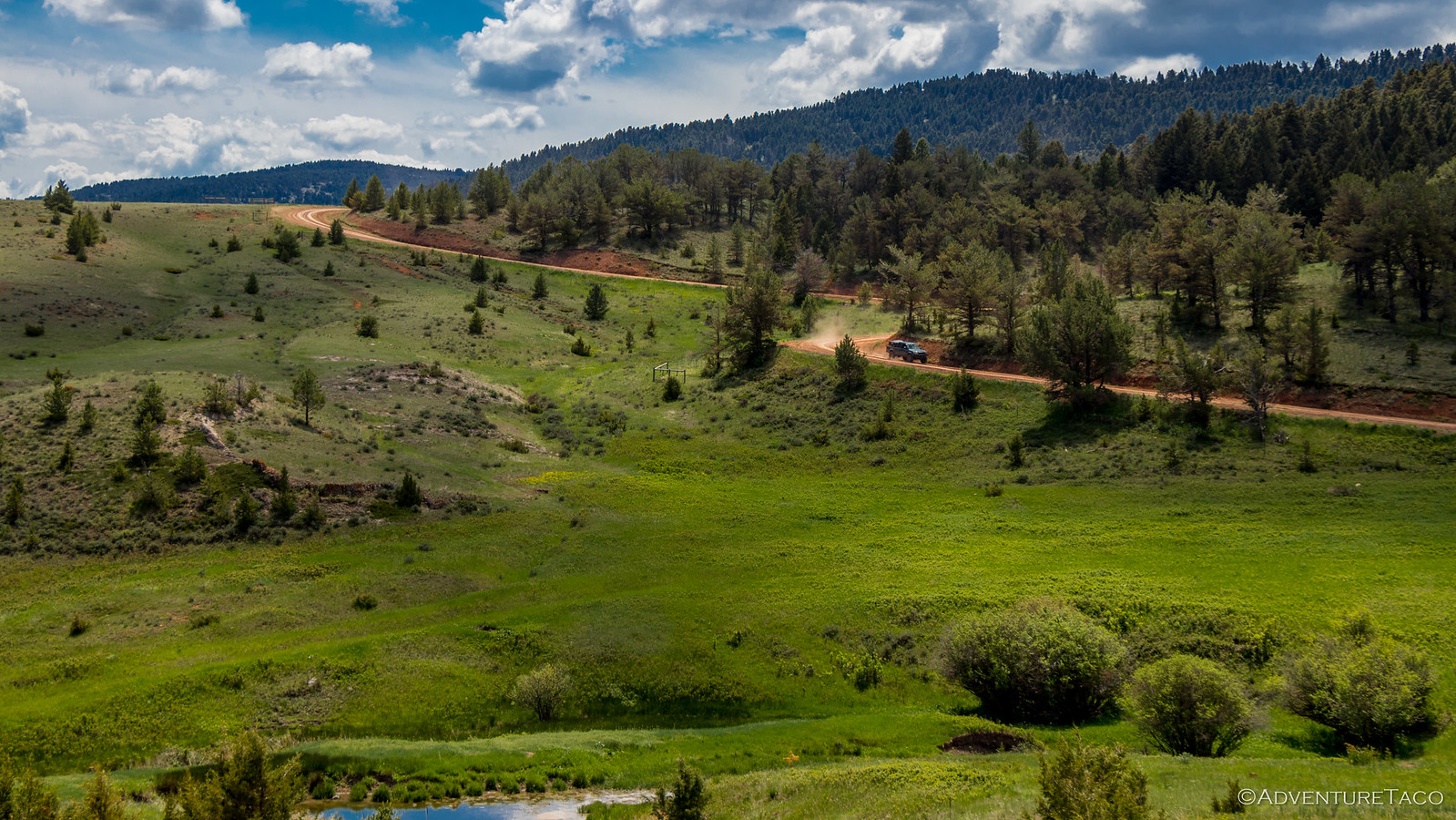 We'd stop here and there to marvel at the surroundings, but all-in-all we had a faster pace than normal - it was hard not to on such nicely graded roads! 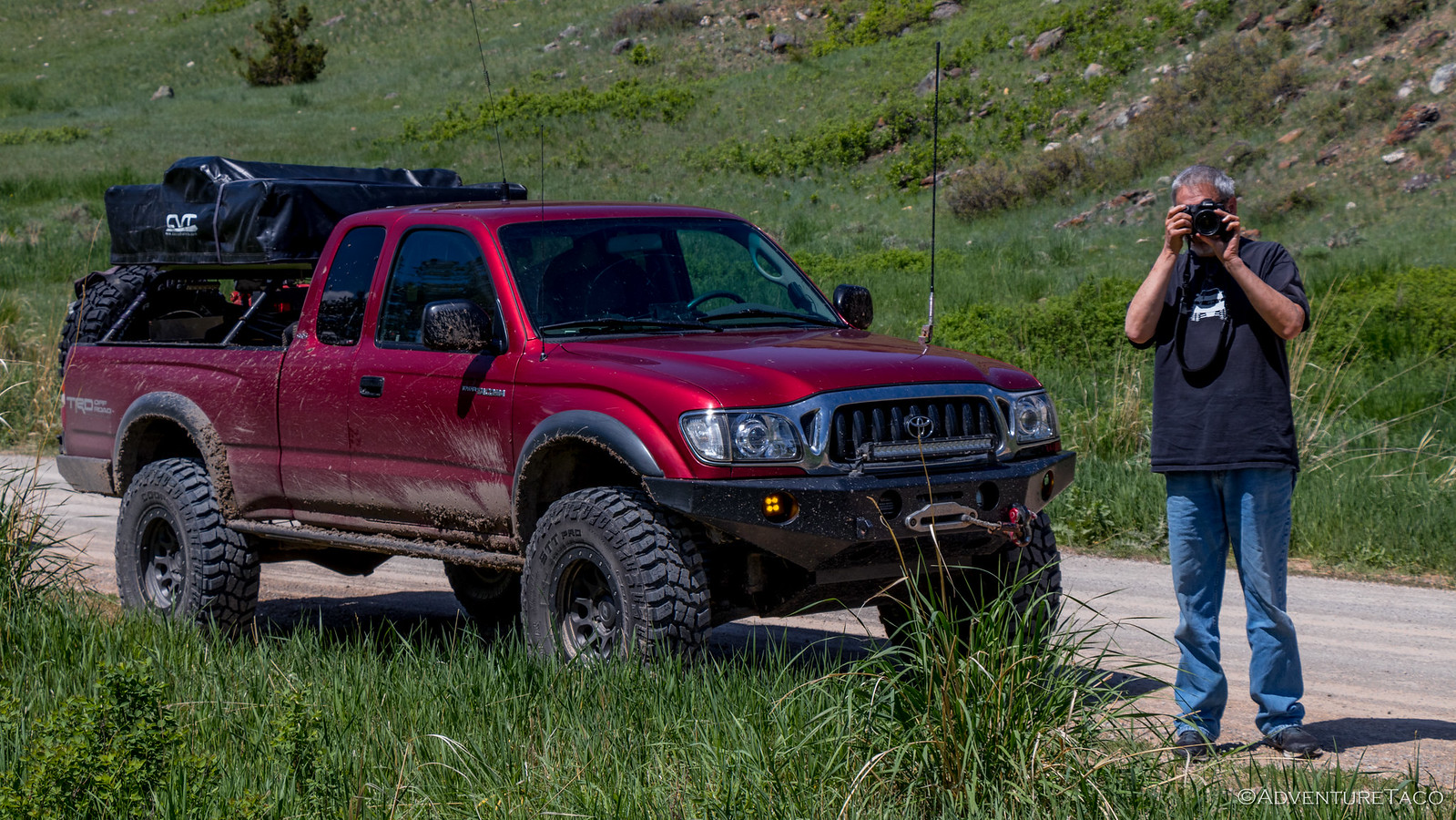 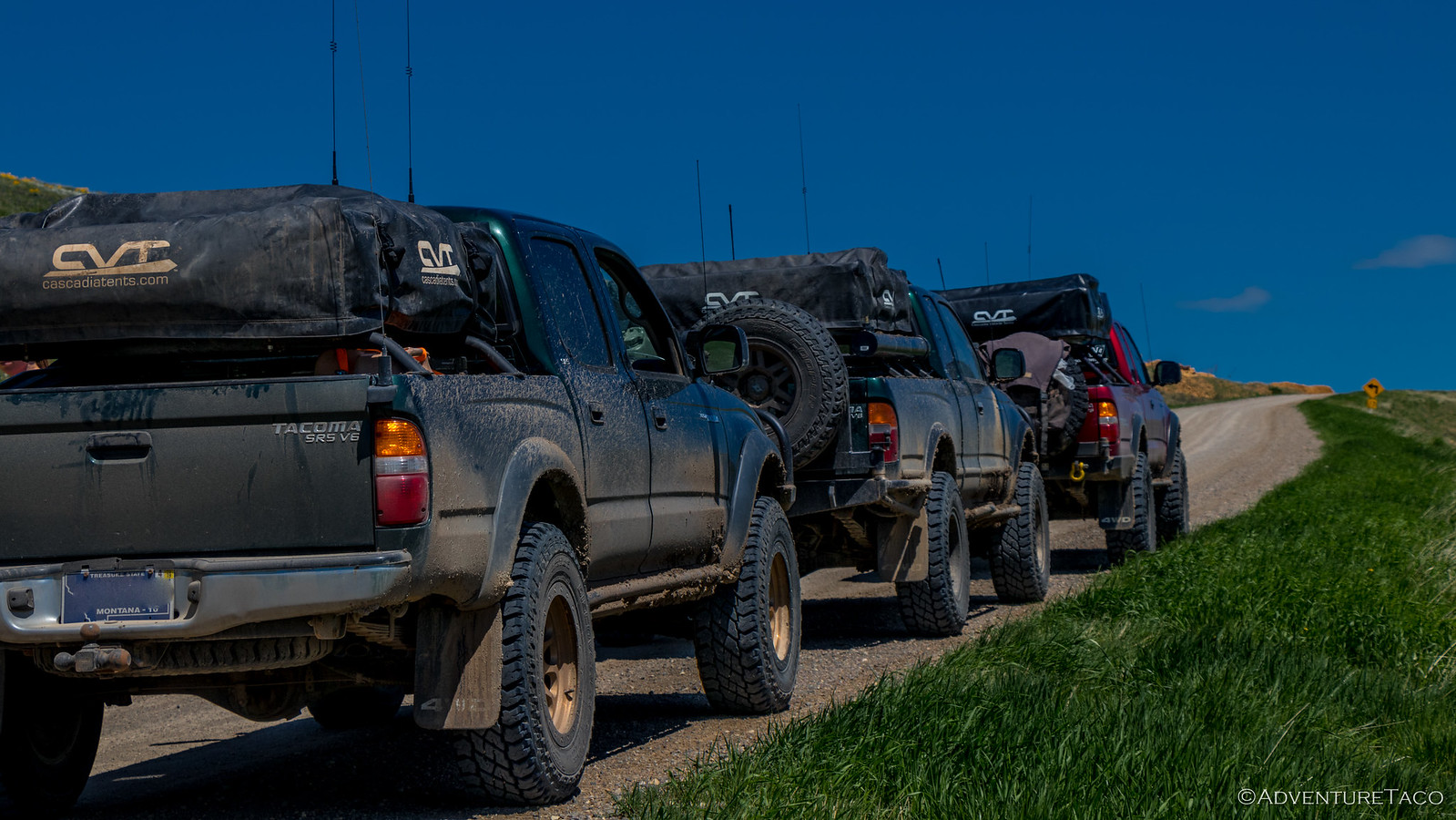 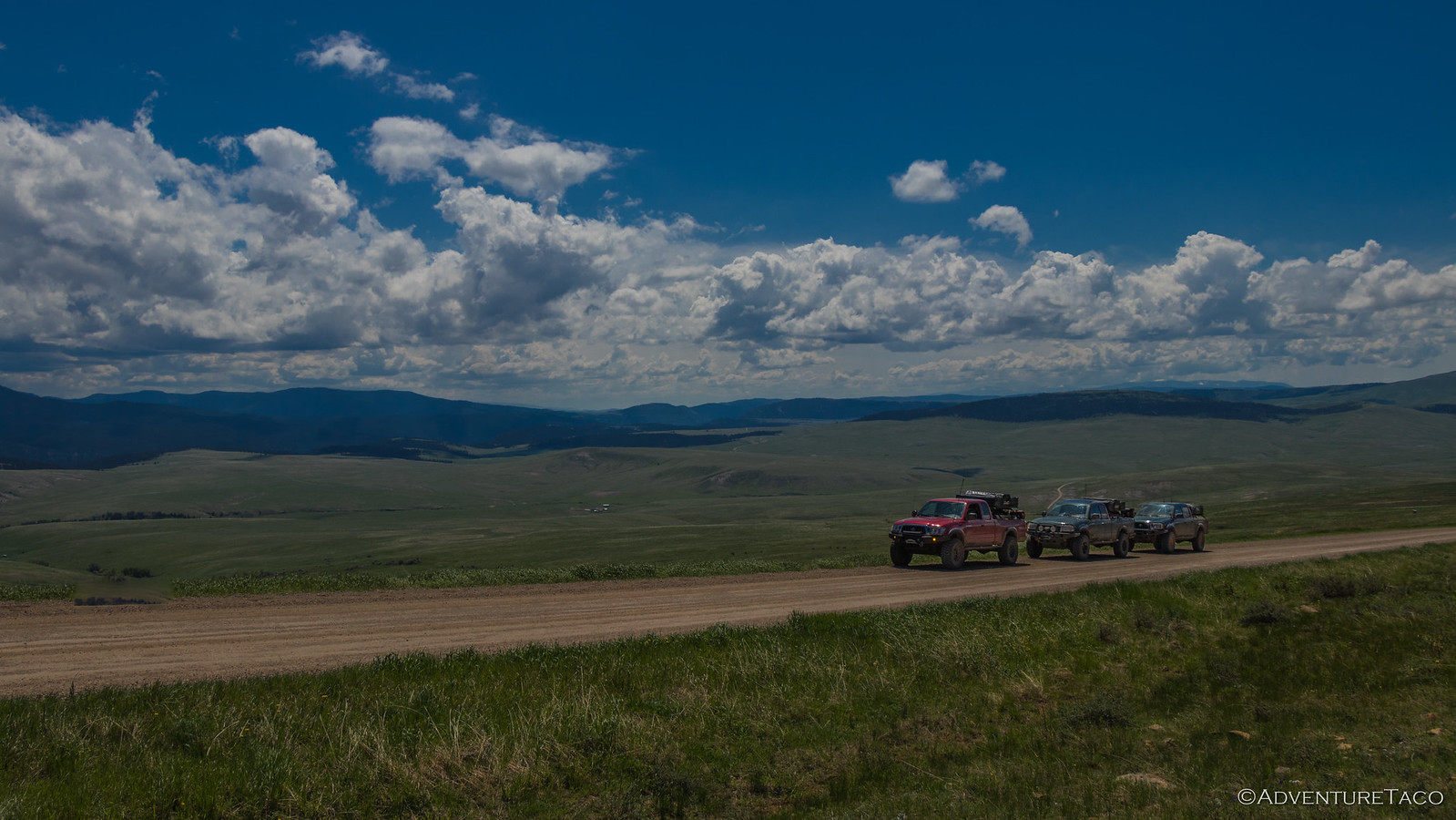 As lunch time neared, we settled on a shady area near the Smith River that locals used to put in their rafts and and float down the river. Of course, the vehicles used for this were generally large vans or other more "street appropriate" modes of transportation. So, as we pulled in and assembled our lunches on our tailgates, a small crowd of folks gathered around the rigs - curious where we'd been, where we were going, and what those "big black things" on the back were.

Eventually though, we got our lunches made and eaten - at a picnic table in the shade - and decided after an hour or so that we should probably head out. Our next destination was in Great Falls - actually it was one of the Great Falls! Mike had scoped it out before the trip and assured us that though it was in-town, it would be well worth our time!

And boy, was he right. As Devin and Monte (well, all of us really) took in the history of Ryan Dam and the Great Falls at one of the many info boards, we all marveled at the dam, the falls, and mostly the amazing quantity of water flowing through the entire apparatus. As it turns out, this one hydroelectric dam provides nearly all the power needed by the greater Great Falls area through four turbines housed in the dam. All the water you can see here is not processed by those turbines, it's all extra!!! 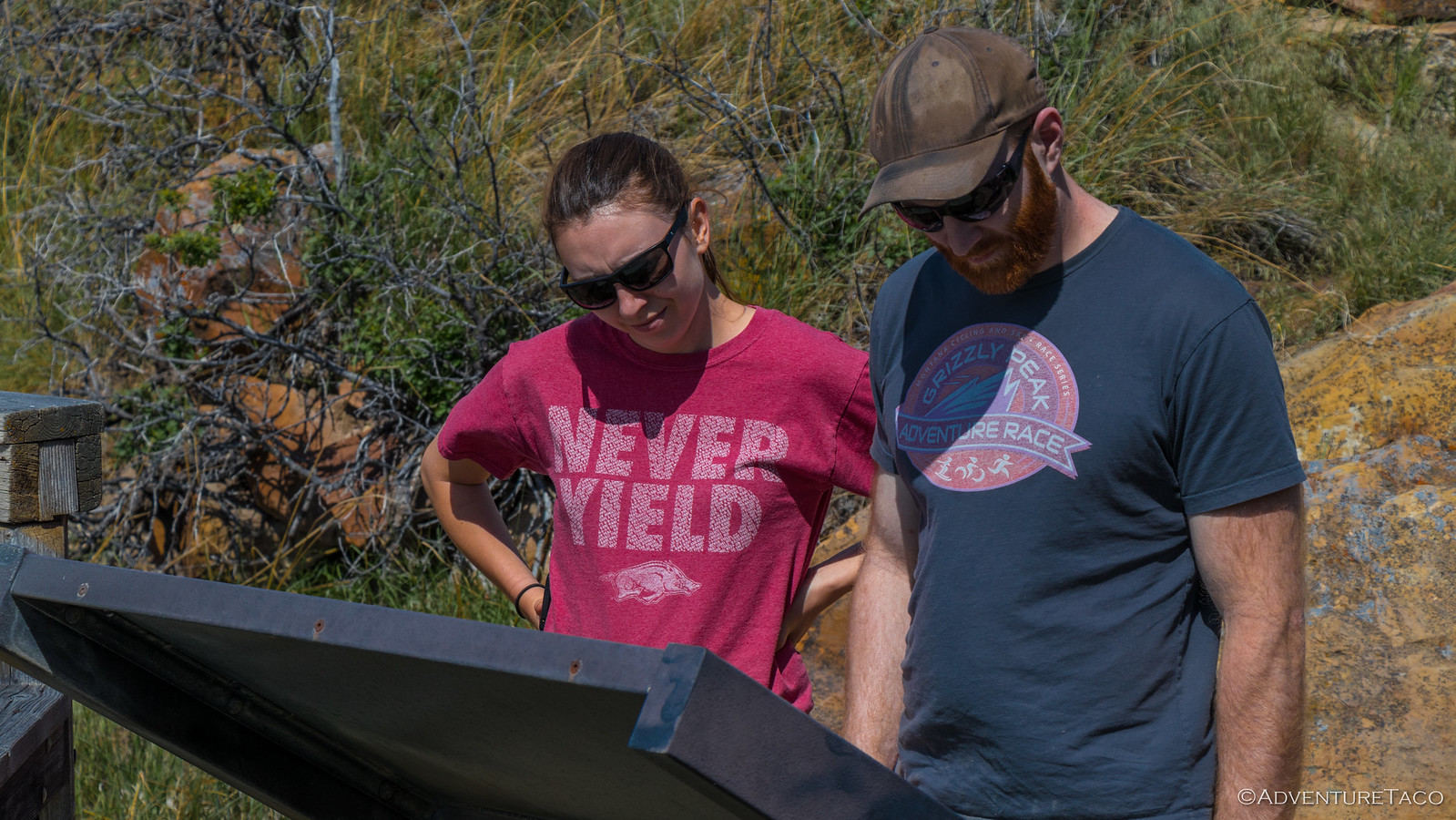 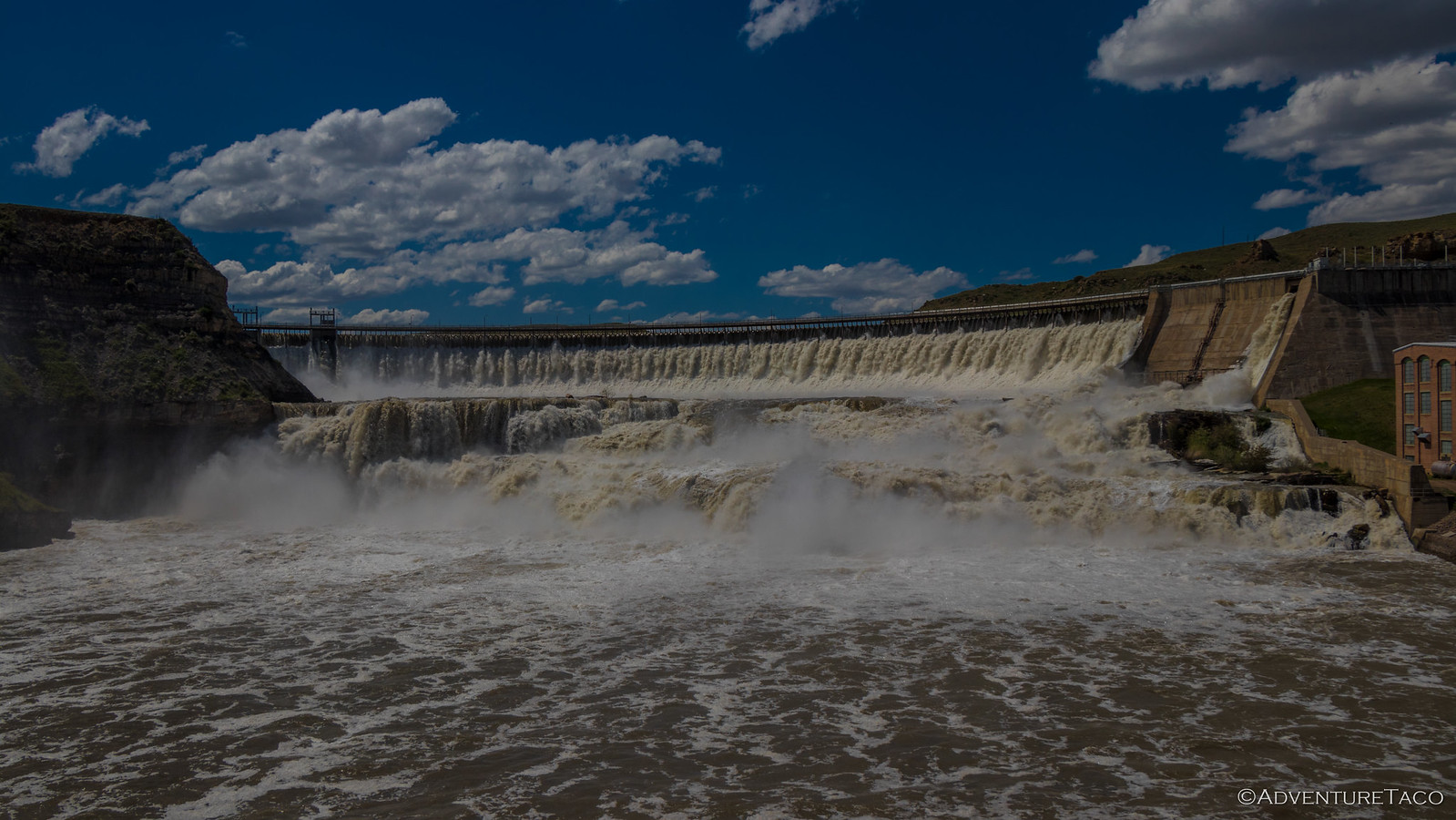 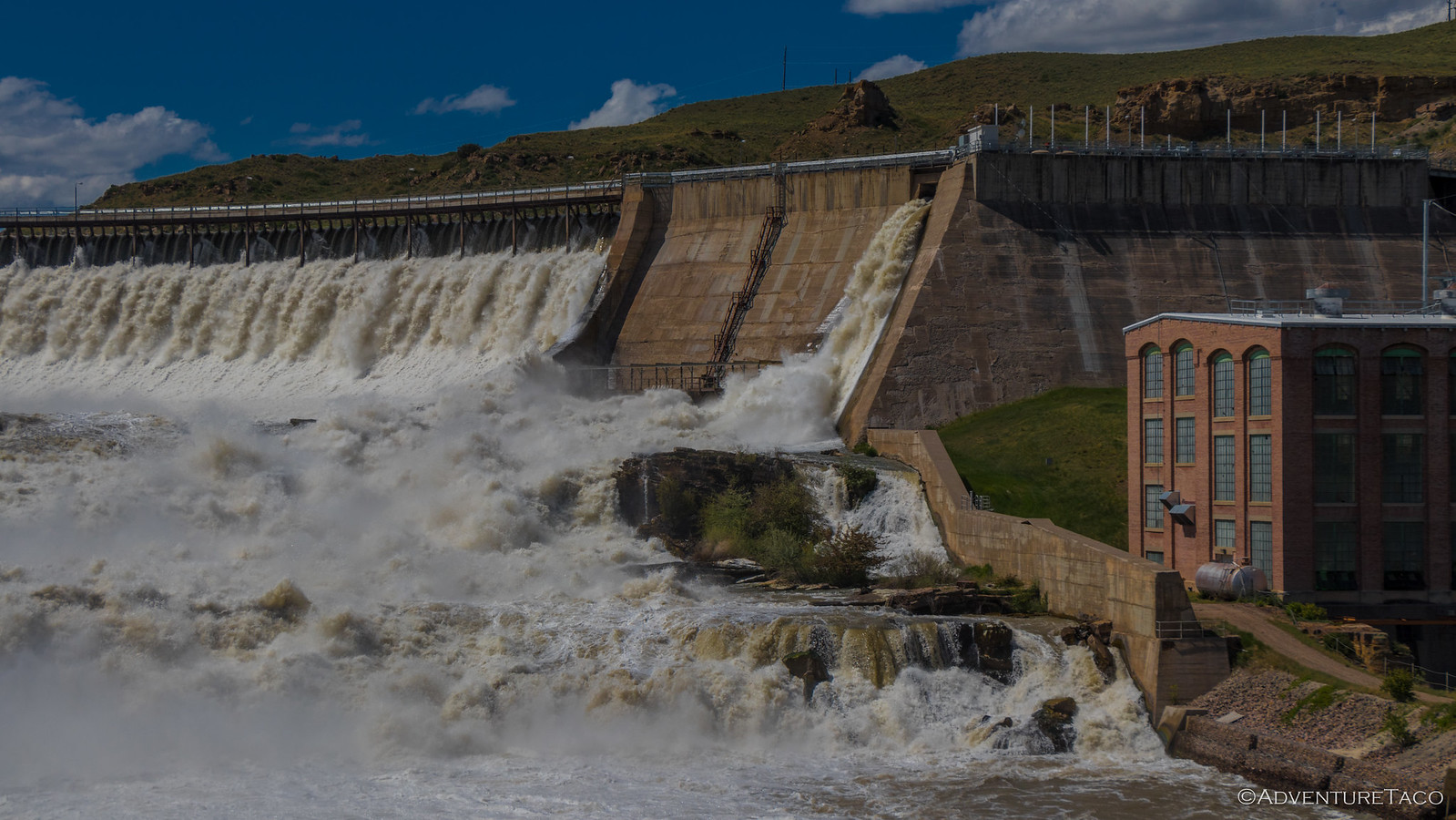 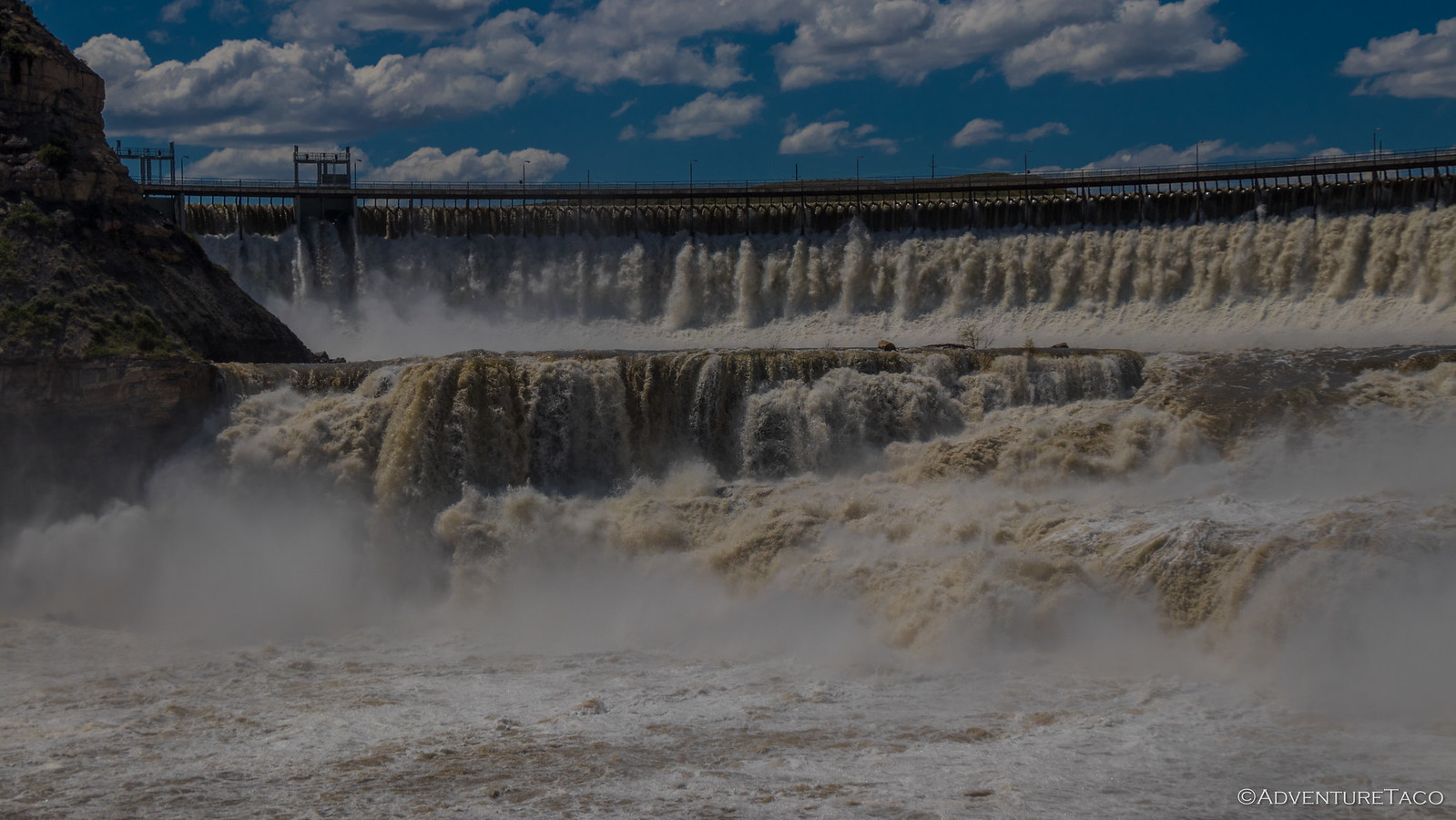 After taking in the sight of such vast quantities of water, we headed back to our trucks and turned southwest towards Helena. Though we traveled this stretch of the trip on the interstate, there was no shortage of spectacular spring views, even if we didn't capture it on film. "Winner of the prettiest stretch of interstate." was Monte's opinion. 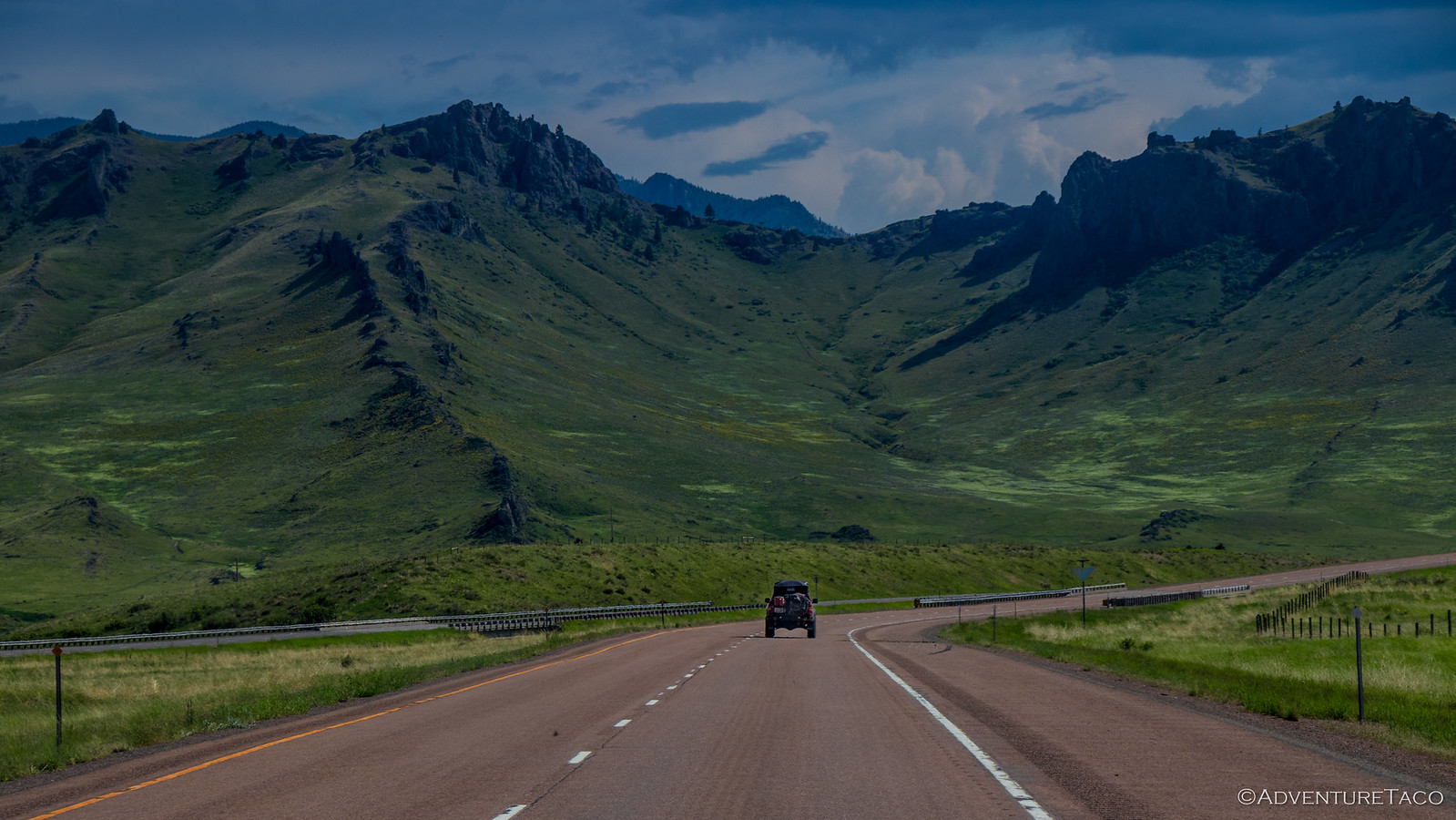 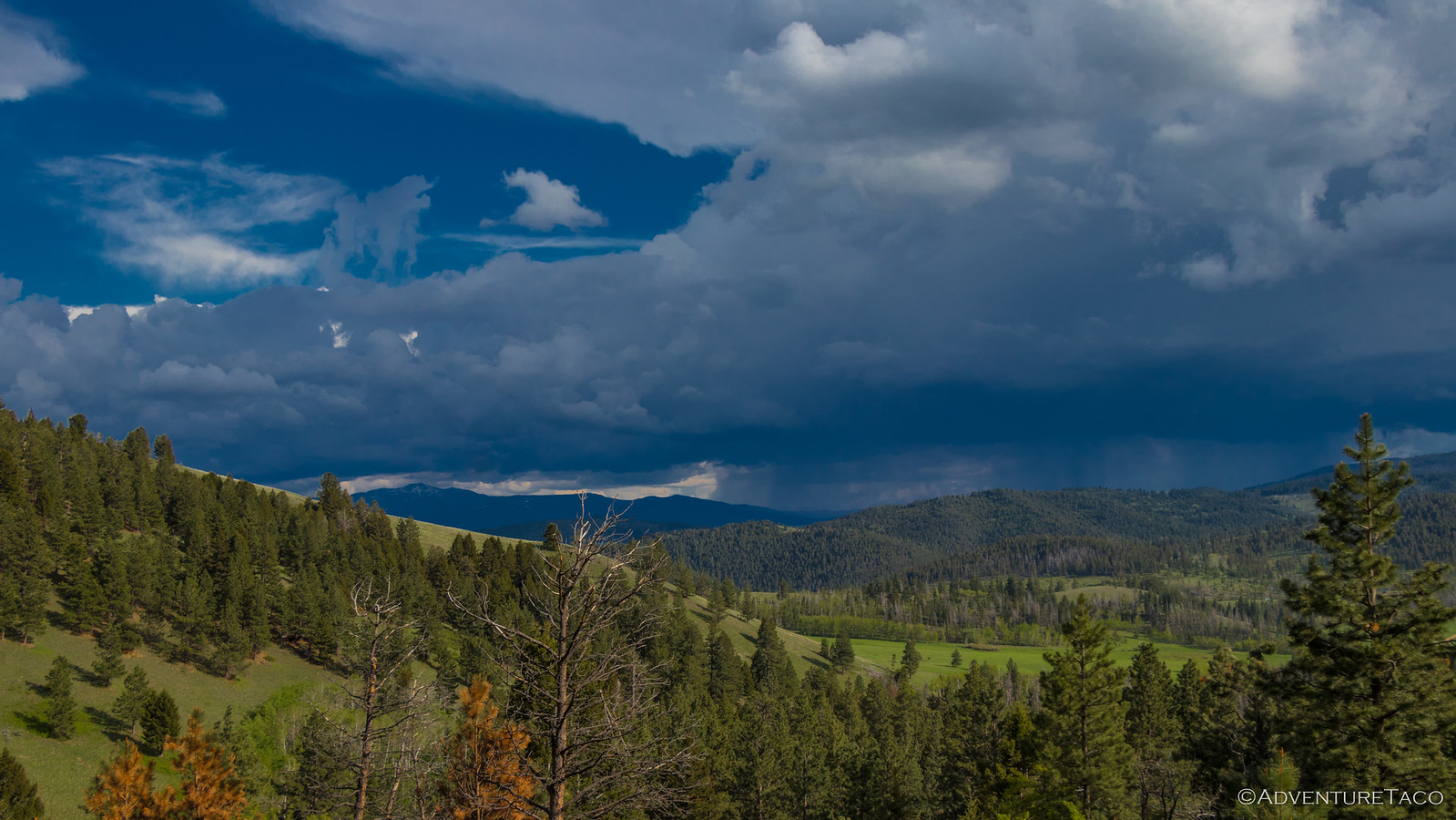 Eventually though, we made it to Helena where we refueled and continued west out of town on dirt - looking for a camp site, but not really in any rush - it was still only mid-afternoon! It was at this point that we decided we'd finally air down - the road still wasn't bad, but our plan was to be on dirt the rest of the day and most of the next, so we figured we should ride in comfort.

Of course, Mike was already running his load-E tires at low(er) pressures on the road for comfort, but that didn't stop him from dropping them even further. And all of us in the other trucks were ready to get our load-E's a little flexier as well. 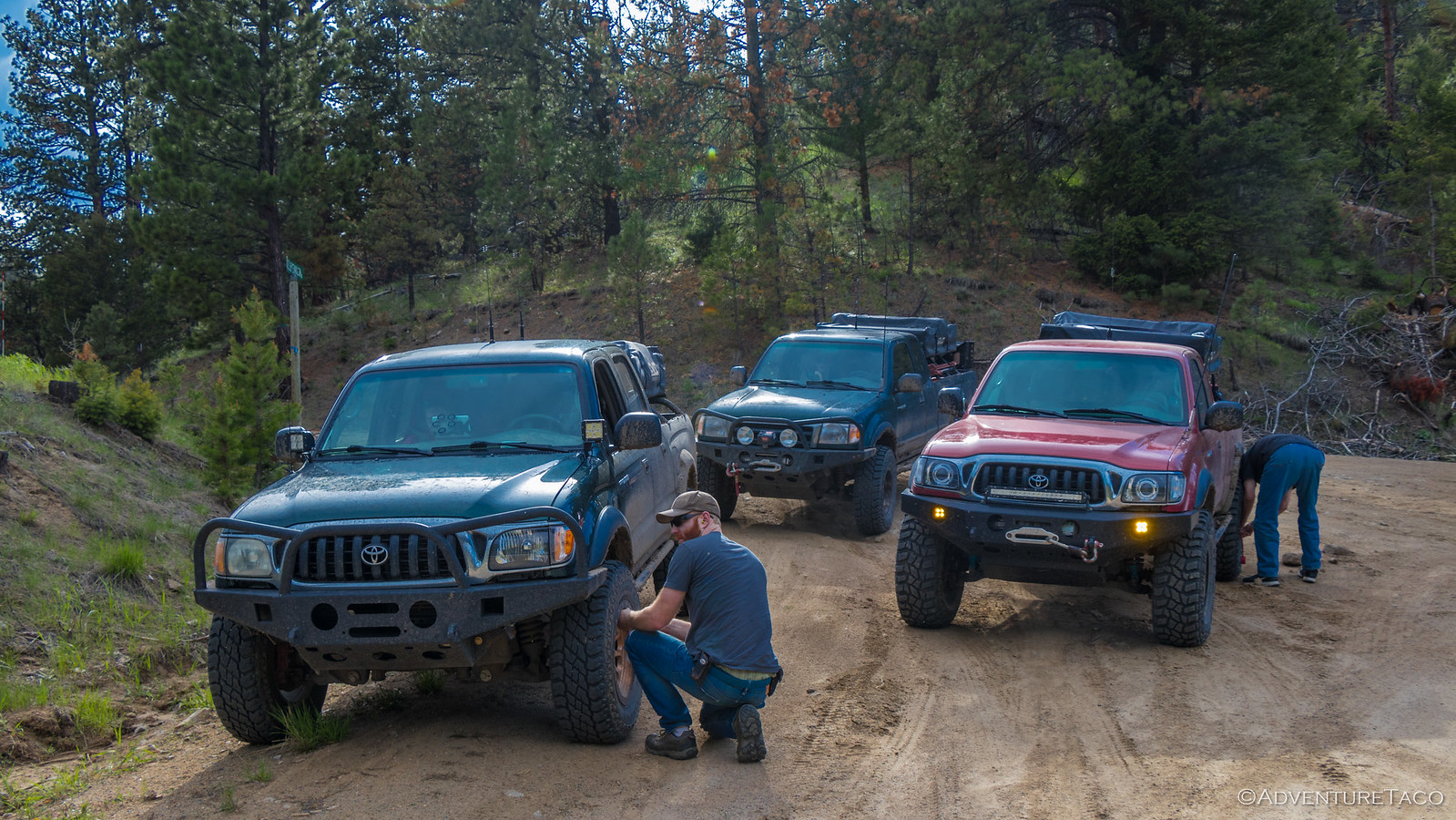 Once we did, the dirt miles passed quickly and comfortably. We followed a track Monte had put together and as we climbed, wondered how far we'd make it before we were blocked by snow. As it turned out, the snow level was around 7200 feet and we only got stopped once - though there was an obvious re-route that was clear and rejoined our track on the other side of the snow drift.

Around 7:00pm we started looking earnestly for a place to camp. We weren't at any risk of reaching camp before dark - after all, the sun didn't set until nearly 10:00pm, but we still found a site within about 15 minutes that was perfect - room for three trucks, a babbling stream nearby, and best of all - very few mosquitoes! 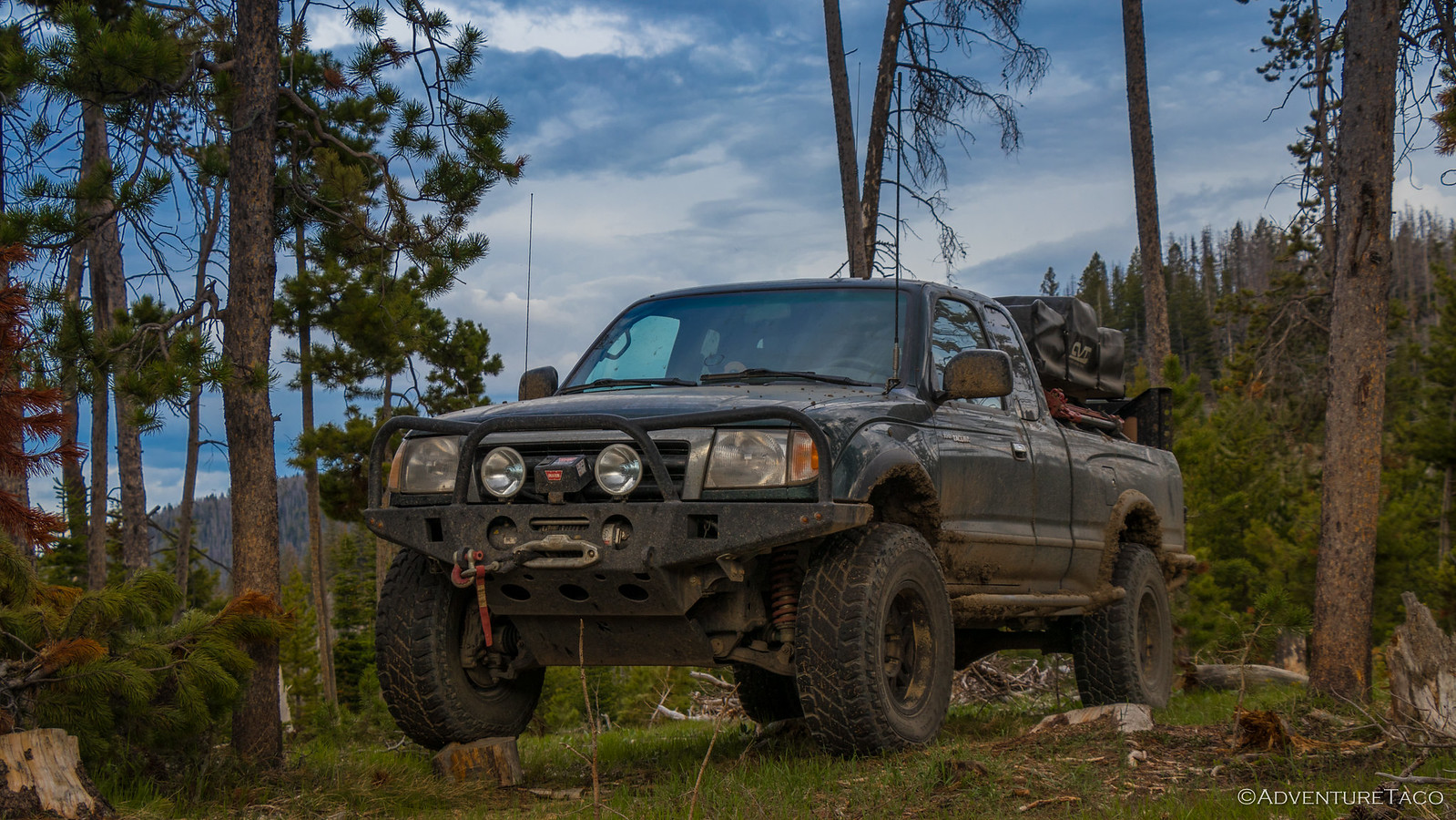 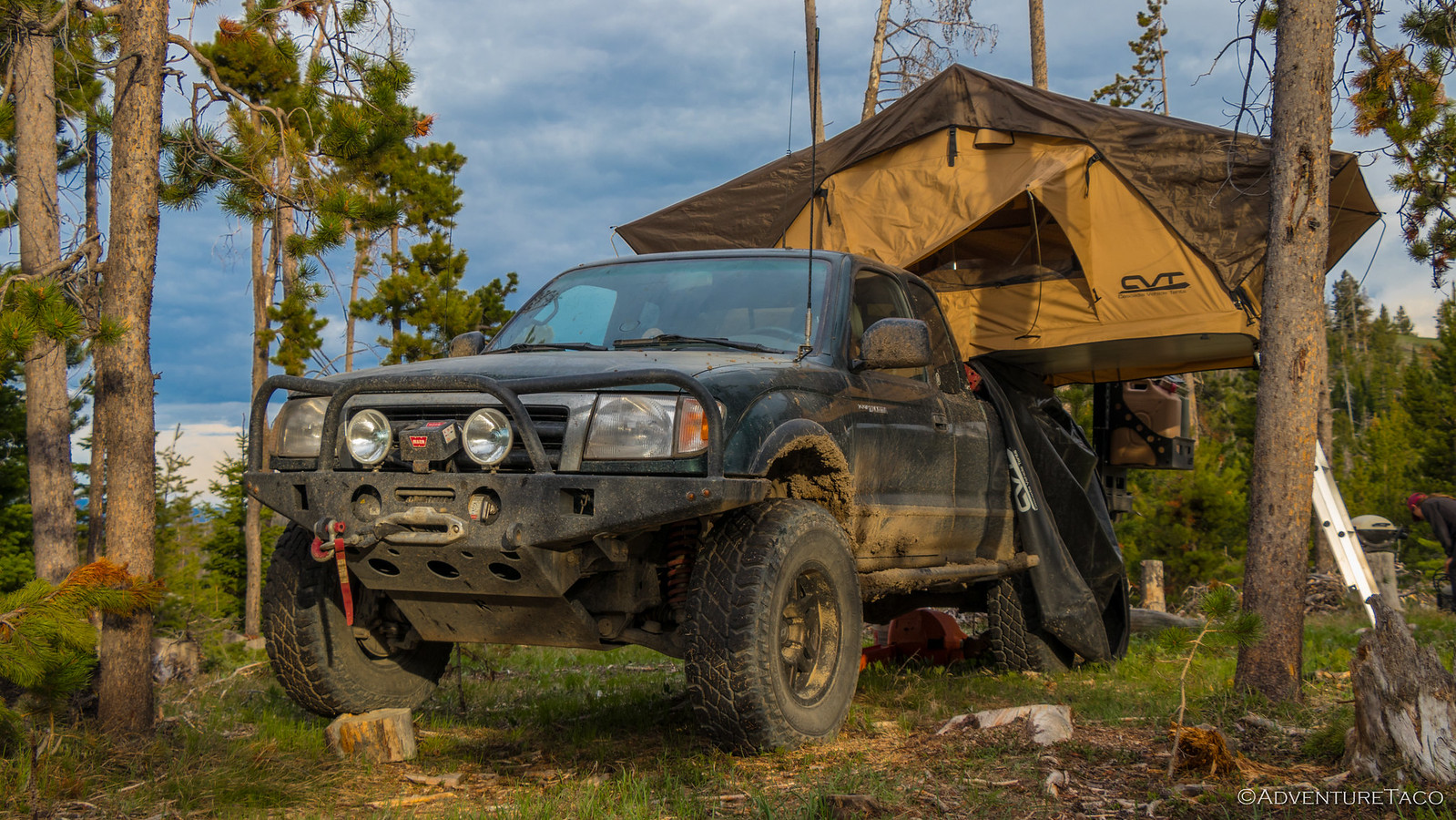 To say it was more our speed than the pay camping at the nearby Park Lake campground would be an understatement.

Soon, we were all setup and with a group effort had a fire going. @mrs.turbodb and I provided the wood, Monte made and stoked the fire, and Mike volunteered his truck (and deployed tent) as the wind screen.

We spent two hours around that fire before any of us realized a moment had passed. We chatted about what we'd seen that day, about what had happened since our last trip together, and many other topics - but trucks were not one, a rarity for us.

As the light started to fade, we all realized that it'd be easier to make dinner with a bit of that precious resource still around so we all got to cooking - @mrs.turbodb and I whipping up some tacos, Devin cooking some of the morels for everyone to enjoy, and Mike and Monte roasting hot dogs over the campfire. 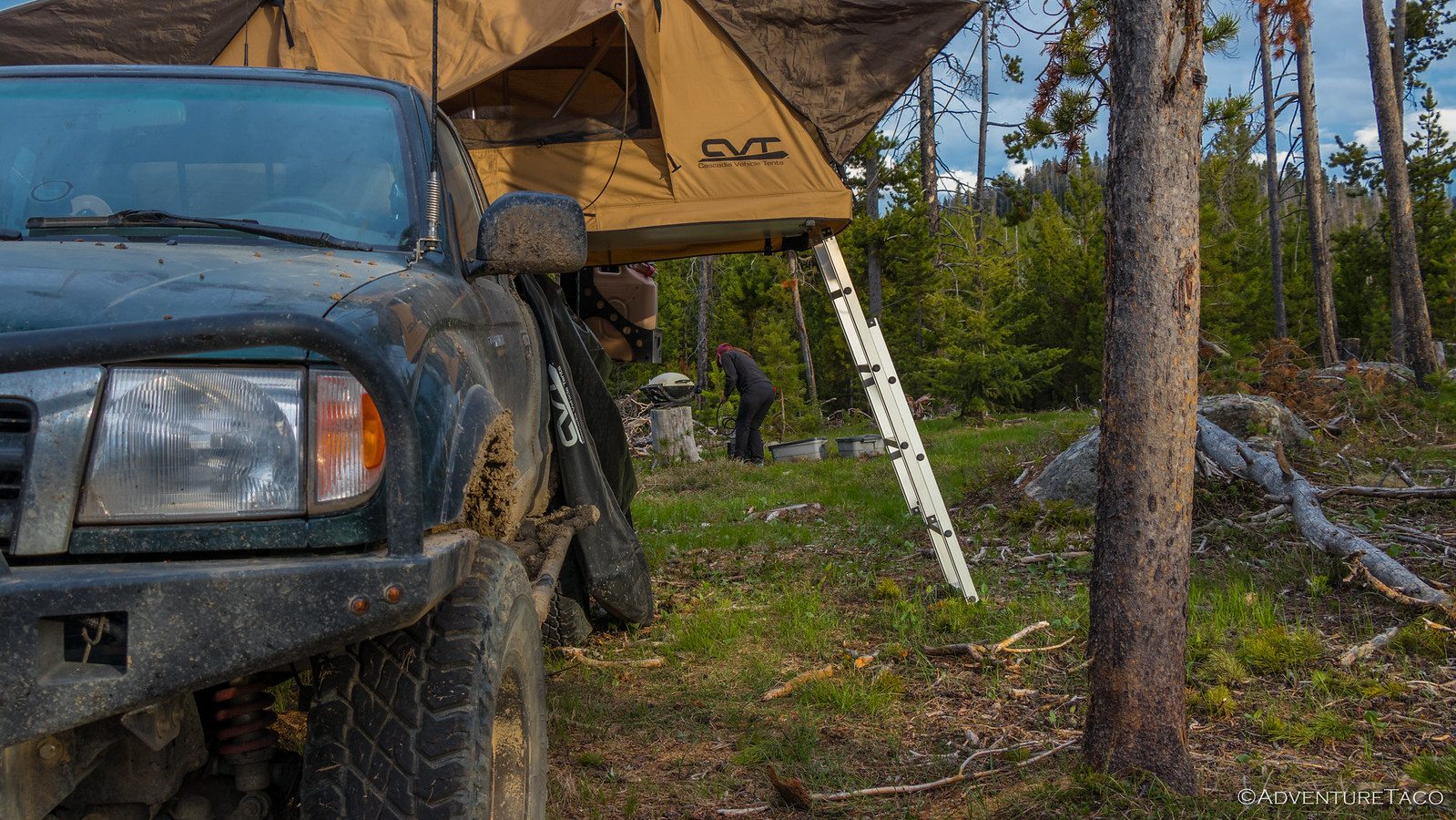 Of course, dinner wasn't the end of our evening and we chatted around the fire late into the night. The warm weather, great company, and the knowledge that we had another day of adventure making for a great time. But, we finally called it a night, heading to our respective tents for a great night's sleep - or so we hoped.

Big Sky and Green Hills | Montana in May #1

And Then There Were Three | Montana in May #3

Our Longest Campfire | Montana in May #4