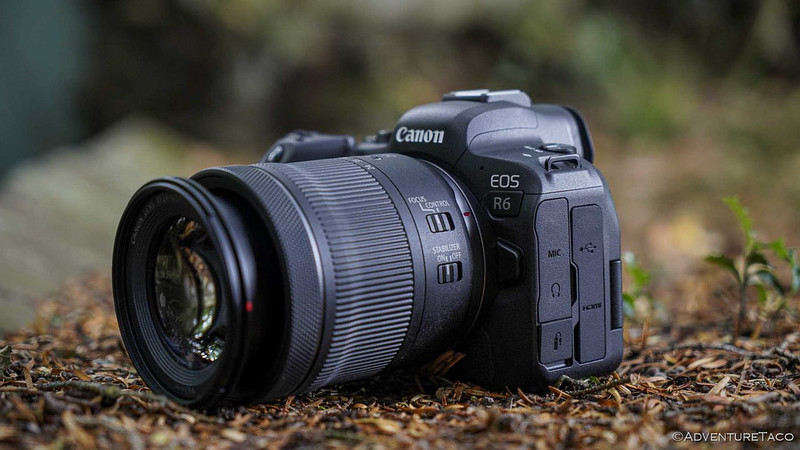 Involuntary Evolution to a New Camera and Glass (Canon R6)

Well, I ran over my 80D and favorite lens with the Tacoma. It wasn't pretty and I wasn't happy, but it happened, and you can read about it in Tragedy in the Tablelands. I'd already been pining after a new, full-frame mirrorless camera, but of course, with a perfectly working setup, I was unlikely to get one. 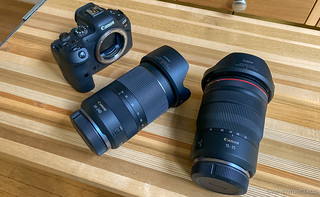 How I Decided on the R6

Before we get into how I like everything so far, it's worth looking at why I went with the gear I did. There were several aspects I was considering, including brand, full- vs. cropped-frame, and mirror vs. mirrorless. Oh, and cost, sort of.

Let me cover brand first. I knew I wanted to go with Canon again, for two reasons. First, I've owned Canon and Sony cameras in the past, and I never really liked the color profile on a Sony, where I've very much enjoyed the color profile on a Canon. I know that's completely tweakable in post processing, but it is what it is for me. Second, I found that I really liked the in-hand ergonomics of the Canon 80D (Note: I'd get a Canon 90D now if I were just going for "replacement"), and the Sony bodies are so different that I didn't really want to make that change. 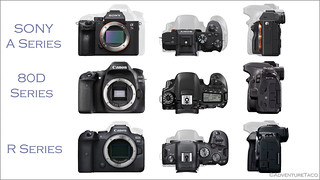 Sony A, and Canon R series, overlaid on my existing camera (80D) for reference. Understandably, the Canons are more similar; the Sony seems too small to me.

There were a couple other minor things with the Canon. First, I felt like in the traditional DSLR market, Canon and Nikon are the two big names (at a reasonable price point). In the mirrorless market, Sony has been the big name but the Canon R5 and R6 were suddenly giving Sony a run for its money. So, that puts Canon in a "leader" role across both markets; something I liked. And, I admit, is an opinion.

Next, cost. I knew this was going to be an expensive proposition, and while I wanted to keep cost down, that was mostly because I didn't want to have an accident and run over a new multi-thousand dollar camera setup, given my recent experience! Having decided on Canon, I'd basically limited myself to one of the following bodies: Canon 90D if I wanted cropped frame, Canon 5D Mark IV if I wanted full frame, and either the Canon R5 or R6 if I wanted mirrorless full frame. 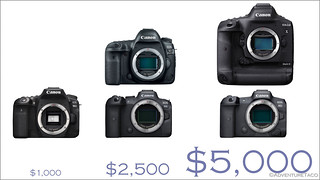 Three cost tiers I was considering. 1DX Mark III included for reference only.

Next was cropped- vs. full-frame sensor. This wasn't much of a decision for me - I figured that if I was buying a new camera, I might as well go full frame. It would give me better low light performance for things like star photos, sunrise and sunset, the interior of cabins, and the views out of mine shafts. The drawback as that it would mean going with all new lenses, since my existing EF-S lenses were crop-sensor. Given that I'd run over my most expensive lens at the same time as the camera body though, this was a no-brainer. So, now I was down to the 5D Mark IV or the new R-line.

The last decision point was whether I should go mirrorless or not. I think I knew at the time - but didn't realize the extent to which - this was biggest and most impactful decision. Not because of the varying cost of bodies, but because this decision would determine which line of lenses (EF or RF) I ended up investing in. Knowing that the lens decision will (hopefully) have a longer time horizon than whatever body I ended up with, I ultimately decided I should go with the newest Canon had to offer - the RF line.

My process then narrowed me down to the Canon R5 or R6, and I began weighing off those two cameras, or really, weighing off two aspects of the two cameras: sensors and cost. The sensors are the same physical size between the cameras, but the R5 squeezes 45MP onto the sensor while the R6 uses a 20MP sensor. For reference, my 80D used a 24MP sensor. 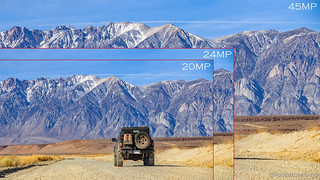 The newly designed 45MP sensor on the R5 would allow for more cropping in Adobe Lightroom, but could make for cumbersomely large file sizes. Additionally, cramming more megapixels onto a sensor has - historically - meant introducing more noise in low light situations. The 20MP sensor on the R6 wouldn't allow the same cropping capabilities, but would generate more manageable files and might have better low light performance, since each receptor on the sensor is larger and absorbs more light. Also, while not as new as the R5 sensor, it is the same sensor Canon uses in its highest end camera - the 1DX Mark III - so it had that going for it.

So in the end, I opted for the Canon R6 due to its cost and my hope that I'd be happy with its great sensor, and that I wouldn't miss the ability to crop quite as much in Lightroom.

I've been extremely happy with my Canon EF-S 18-135mm IS USM (with a 1.6x crop sensor, this is effectively a 27-216mm lens) as a walk-around lens, and I wanted something similar for the new setup. Being relatively new, the RF line of lenses doesn't have quite as much variety as the EF series, but I was happy to see that there was a Canon RF 24-240mm F4-F6.3 IS USM lens that I thought would work quite well. In fact, I wondered if I'd be able to use it for all my shooting - even wide angle - because it was slightly wider than my previous setup.

I'd find out after a single trip (Right Back to the Owens Valley) that I still needed a real wide-angle lens, and this is where the RF lens lineup showed its limitations. The only wide-angle zoom option was the Canon RF 15-35mm F2.8 L IS USM lens - part of Canon's trinity - which being an F2.8 L, cost nearly as much as the R6 body.

To say I was giddy with excitement when boxes started showing up would be an understatement. Everything was well packed from Canon, and it was like Christmas in January, which is sort of just like extended actual Christmas now that I think about it. First impressions:

One thing was for certain - I was going to need to use all this stuff for a while to see how I liked it for real.

I've used the new setup for about a month now. Over the course of three trips, I've been on the trail for 15 nights and taken about 6000 photos. And just to be clear, that's not necessarily quality photos - there have been far fewer of those.

Let me start by saying that the photos that come out of the whole setup are great. Anyone considering the R6 body and either of these two lenses doesn't need to worry about photo quality - it is tremendous. Here are some of the things I really like: 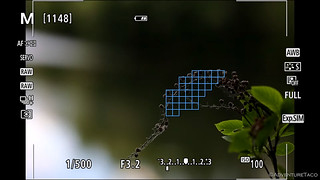 There are of course, things I don't love about the new setup, too. Let's start with my biggest complaint:

Then, there are other things that are less than ideal, but really just annoyances: 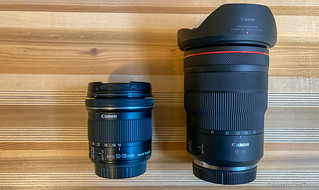 Old vs. new wide angles. The new lens is not pocketable.

And, a couple things I'm not sure about:

So, overall, I'd say that I'm optimistically happy for now. There would have been less friction moving to a Canon 90D or 5D Mark IV - since the battery life issue is my biggest complain - but I think in the long run, moving to the new R line is a smart choice. The RF mount is Canon's bet for the future, and I'm sure that over time I'll become accustomed to the differences in the setups.

Plus, it's hard to argue with the quality of the results.

Curious about my approach to photography? A bit tongue and cheek, but I always tell people If You Take Enough Photos, Some Are Bound to be Decent. Of course, I also find that the saying, the more I practice, the luckier I get also applies. 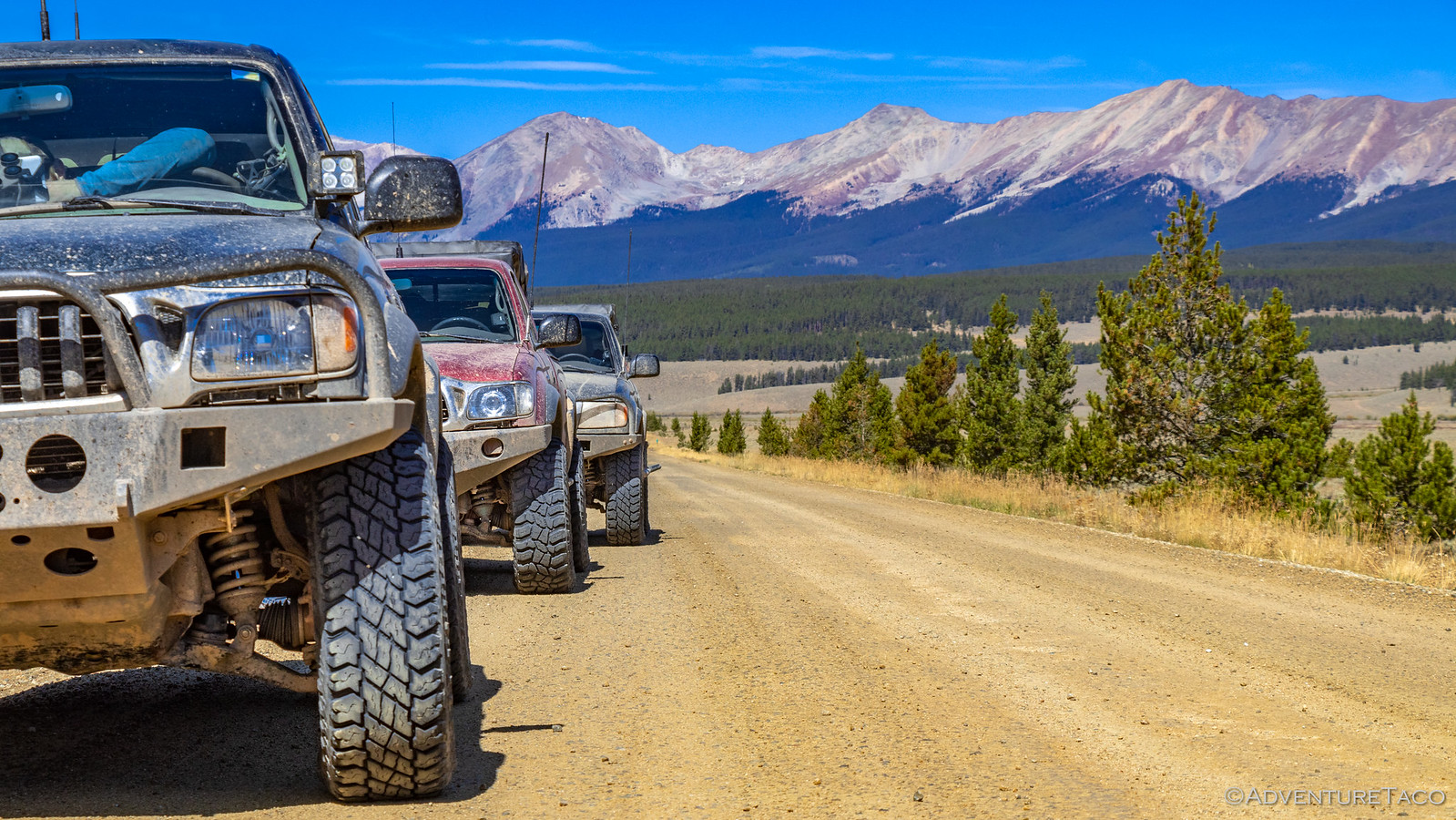 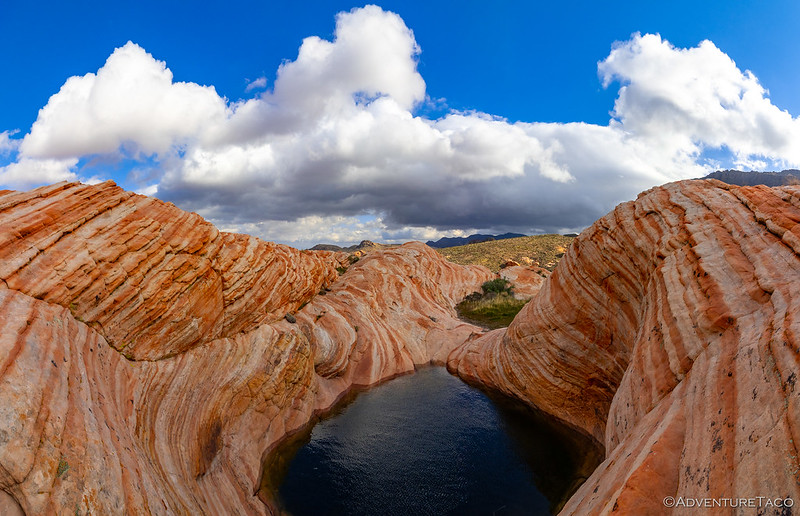