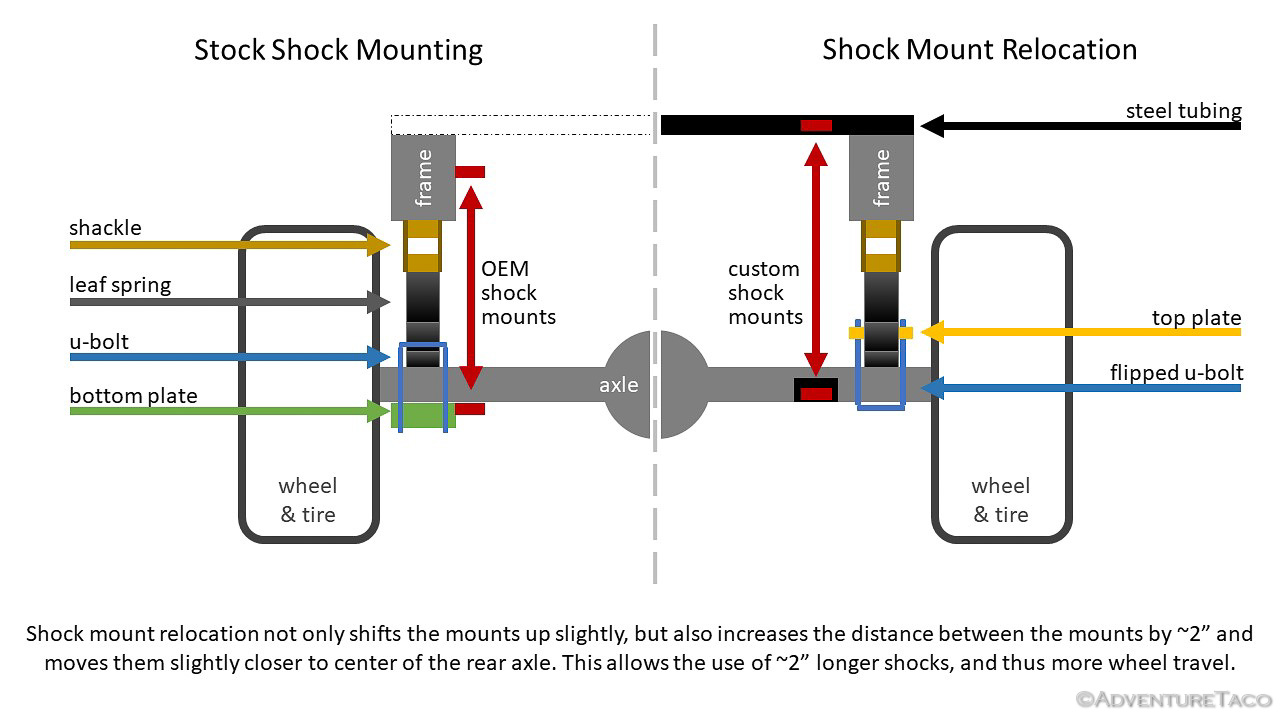 I recently relocated the rear shock mounts on my 2000 Toyota Tacoma, and it didn't go so well...at least the first time. I didn't get the mounts in quite the right position (you can read the whole story here) and that meant cutting them off and doing everything a second time, the right way.

Learn from my mistake. Here, I'll outline the proper steps (in a printable format - check out the story above for photos of the process) to relocating rear shock mounts on a 1st gen Toyota Tacoma - though, the steps are the same for any truck with rear leaf springs.

Gathering the Parts and Tools

There aren't a lot of parts you'll need for this job, and they are relatively cheap and easy to pick up (with the exception of whatever shocks you're planning to install).

As far as tools go, this is a job that doesn't require any special service tools (SSTs), though there are definitely some tools that are more common than others, and there are several necessary power tools. It seems like a long list, but you probably have most of this stuff already:

With all the parts and tools gathered, it's time to get to work. Perhaps obviously, the job is mostly a bunch of removal of parts, some fabrication of new parts, and then a bunch of installation of the parts you removed earlier. Once again, this list of steps is just that - a list of steps (which makes it a great resource to print off and reference when you're doing the job). If you're curious about what a step looks like, I suggest reading the story linked above.

Support the Back of the Truck

Mocking up the Leaf Pack Using Only the Top Leaf

RuffStuff R1988-8 lower shock mounts come with a 10º angle fabbed into the mount when it is mounted to the axle. We want to remove that angle for installation on a first gen Tacoma axle.

Cycling the Suspension (to Determine the Need for Limit Straps)

Completing Fabrication of the Shock Mounts

Cleaning up and Painting

Congratulations - you're done. I mean, there might be some clean-up to do and whatnot, but the next real order of business is to get out on the trail and enjoy your rear suspension!