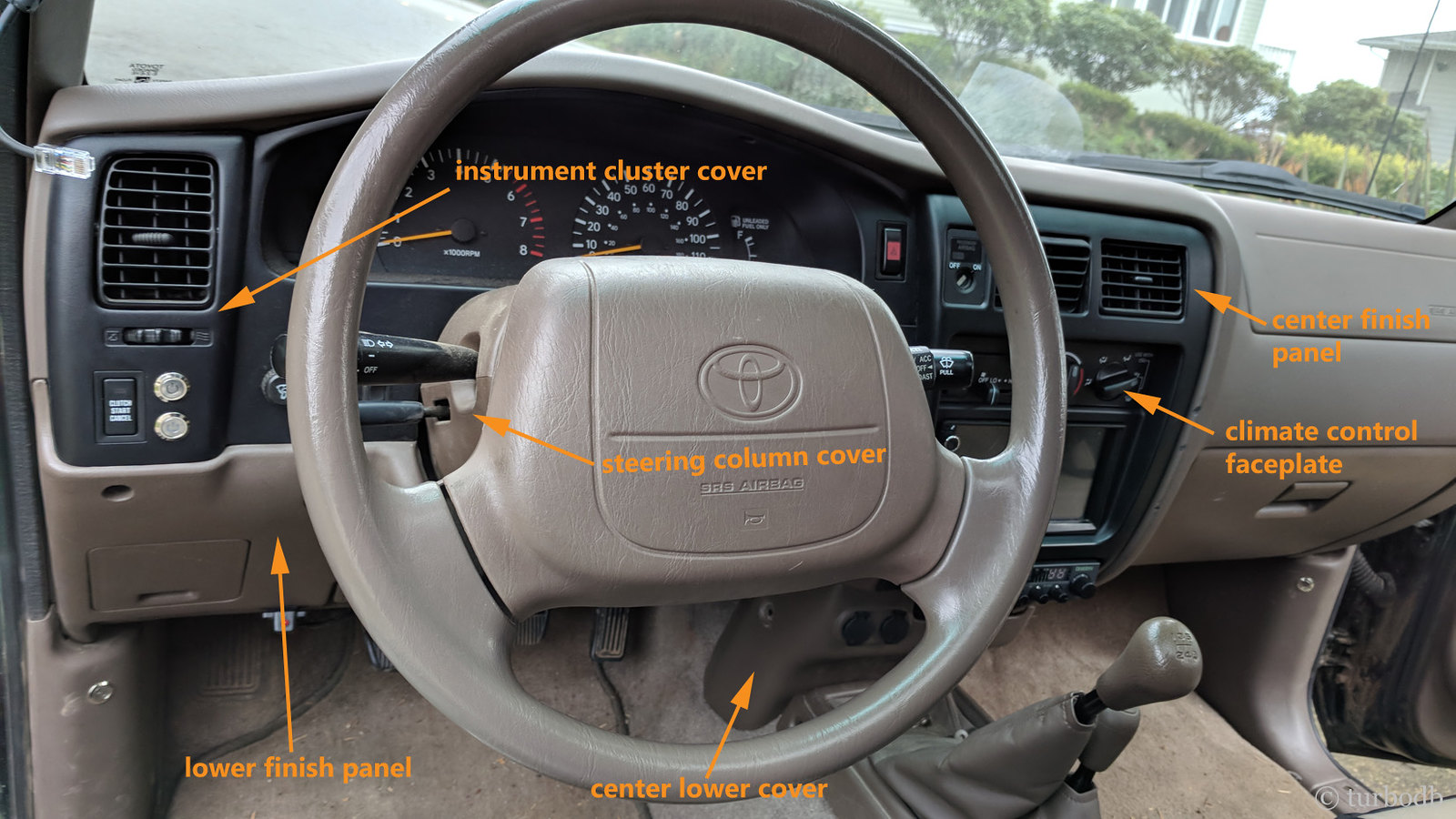 I've removed my dash trim (at least, the driver side) more times than I'd care to admit, and figured it was time to write up the procedure - because I remember how daunting it was the first time.

Removal starts at the bottom-front of the center console, in front the gear-shift, and works it's way up and counter-clockwise to the instrument panel:

Start by removing the plastic center lower cover (which contains the two 12v power receptacles. There are two small plastic clips holding this in place, and to remove them, use a screw driver to push in the center of the clip. 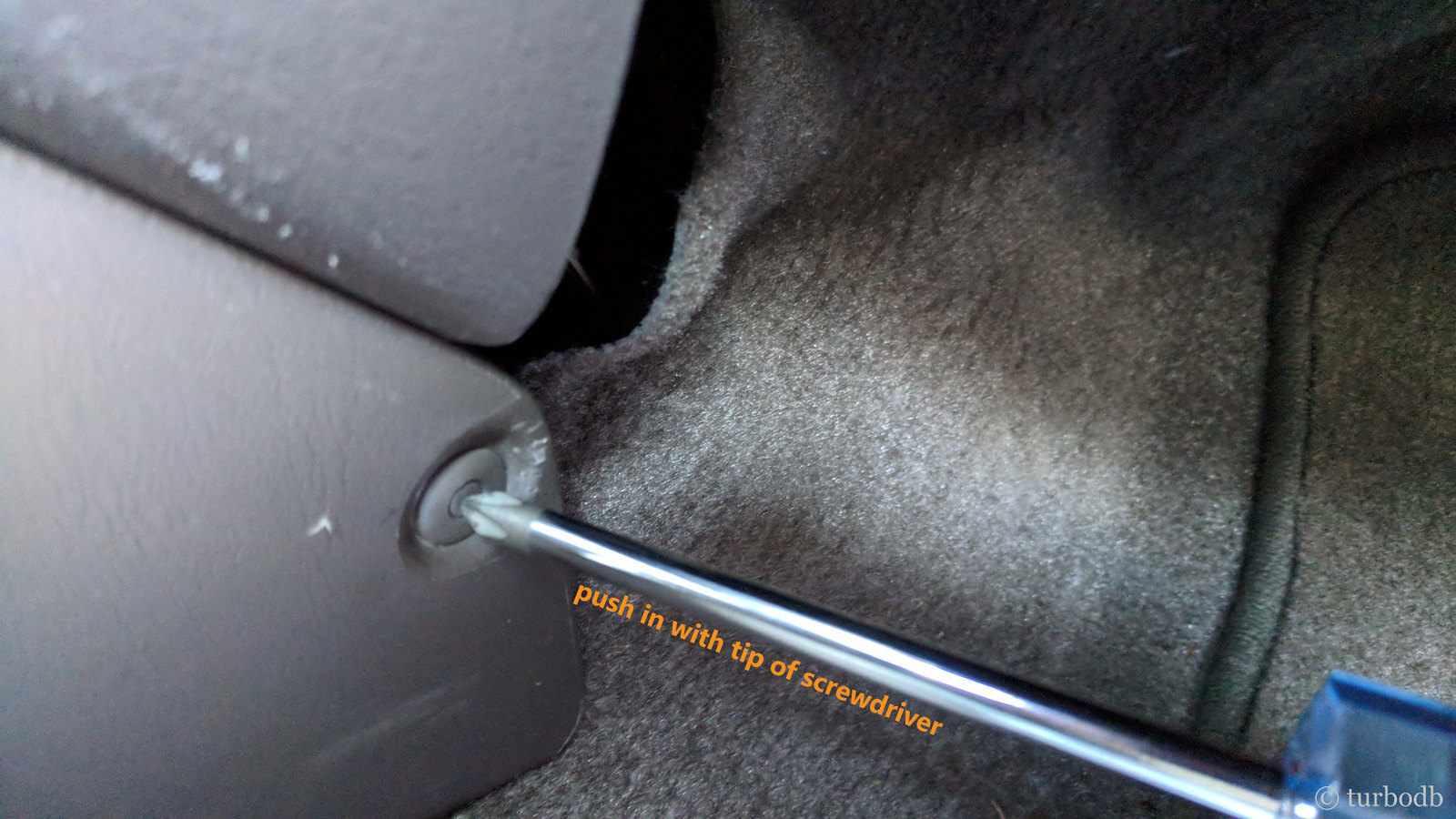 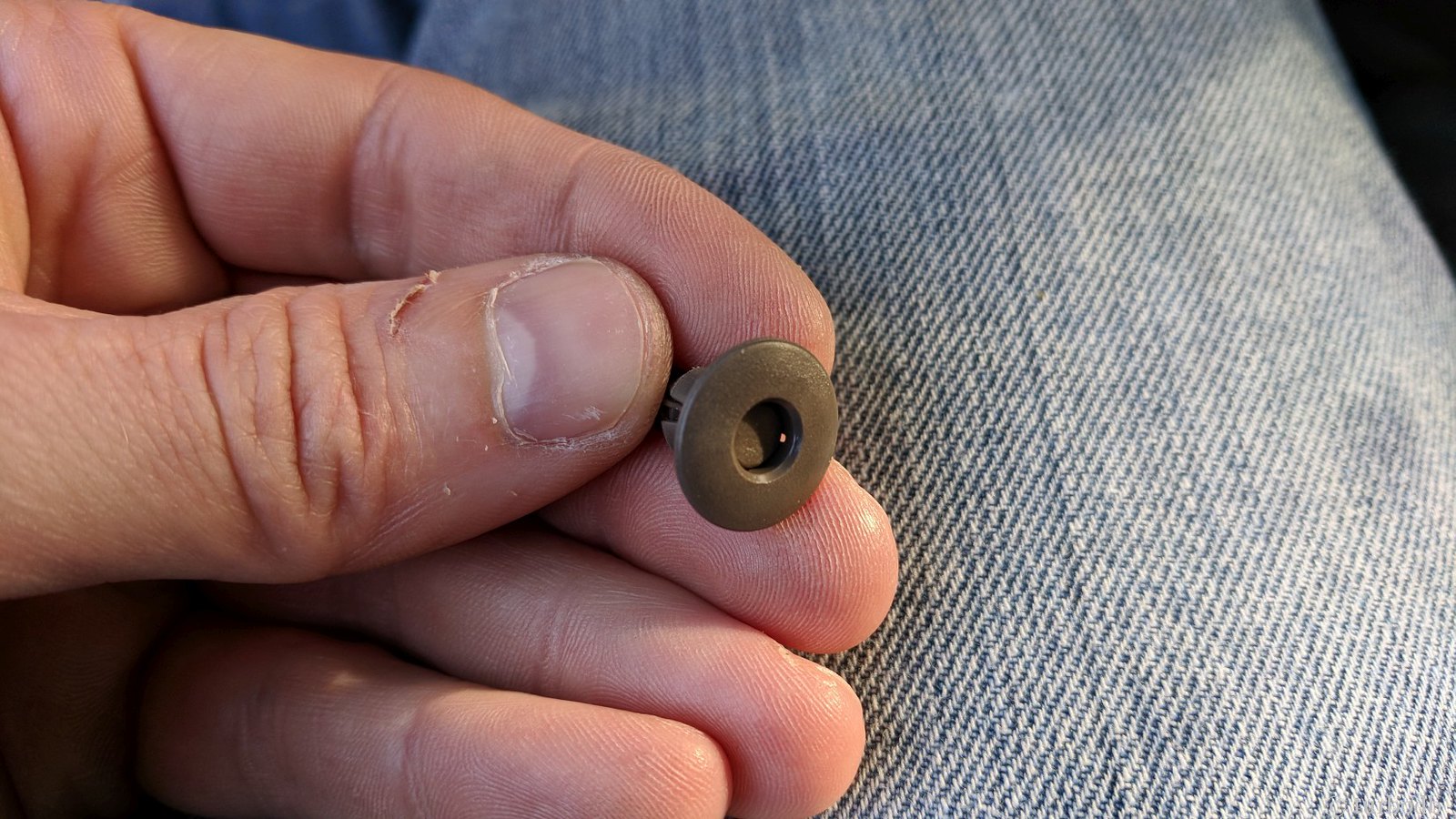 Then, pull straight out to release the two clips. Once these are released, pull the cover out just far enough to unplug the 12v outlets, and then remove and set aside the cover. 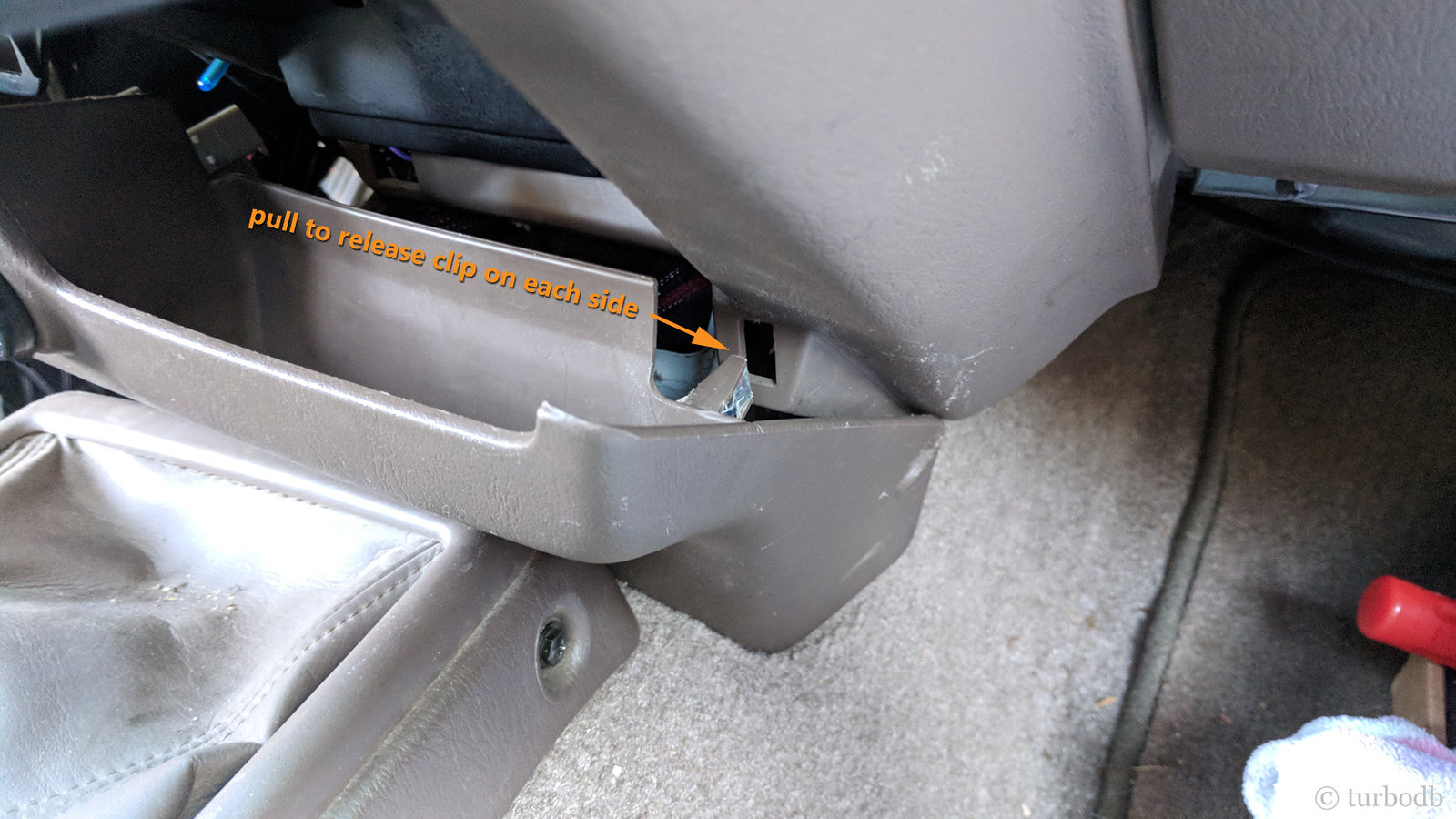 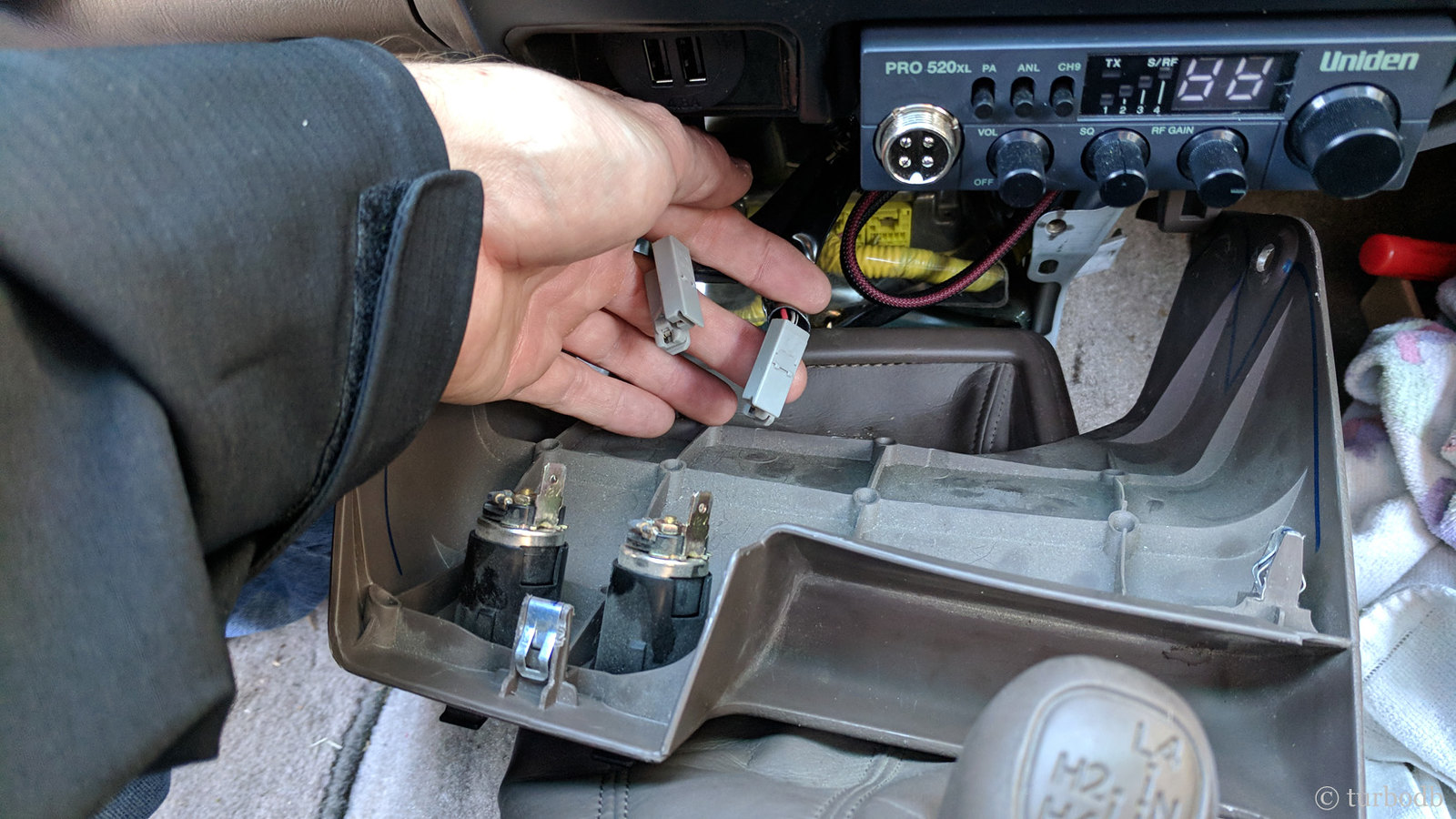 The next piece to remove is perhaps the hardest piece to remove without breaking - the climate control faceplate. Here, you first remove all of the plastic control knobs/levers (they simply pull off) as well as the AC button (which pulls straight out).

Then, slowly pry the face off - there are no screws, just several clips around the perimeter of the faceplate. GO SLOW. BE GENTLE. WIGGLE it various directions. Some clips will come out easier than others, and it's easy to get anxious and break the last clip or two - for me, the last clips are always on the right hand side, and the top-right is the worst. Be patient and it will release. 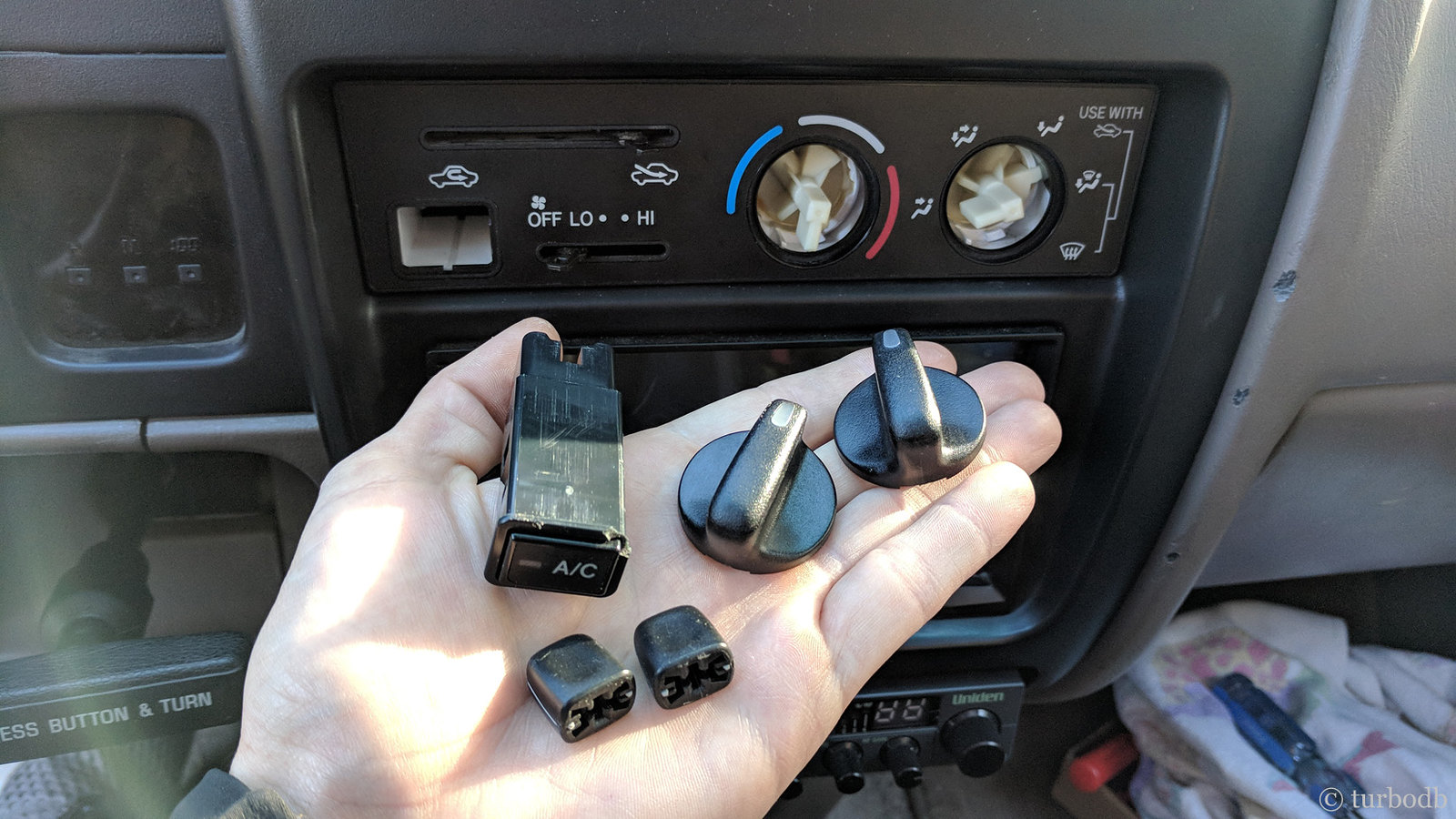 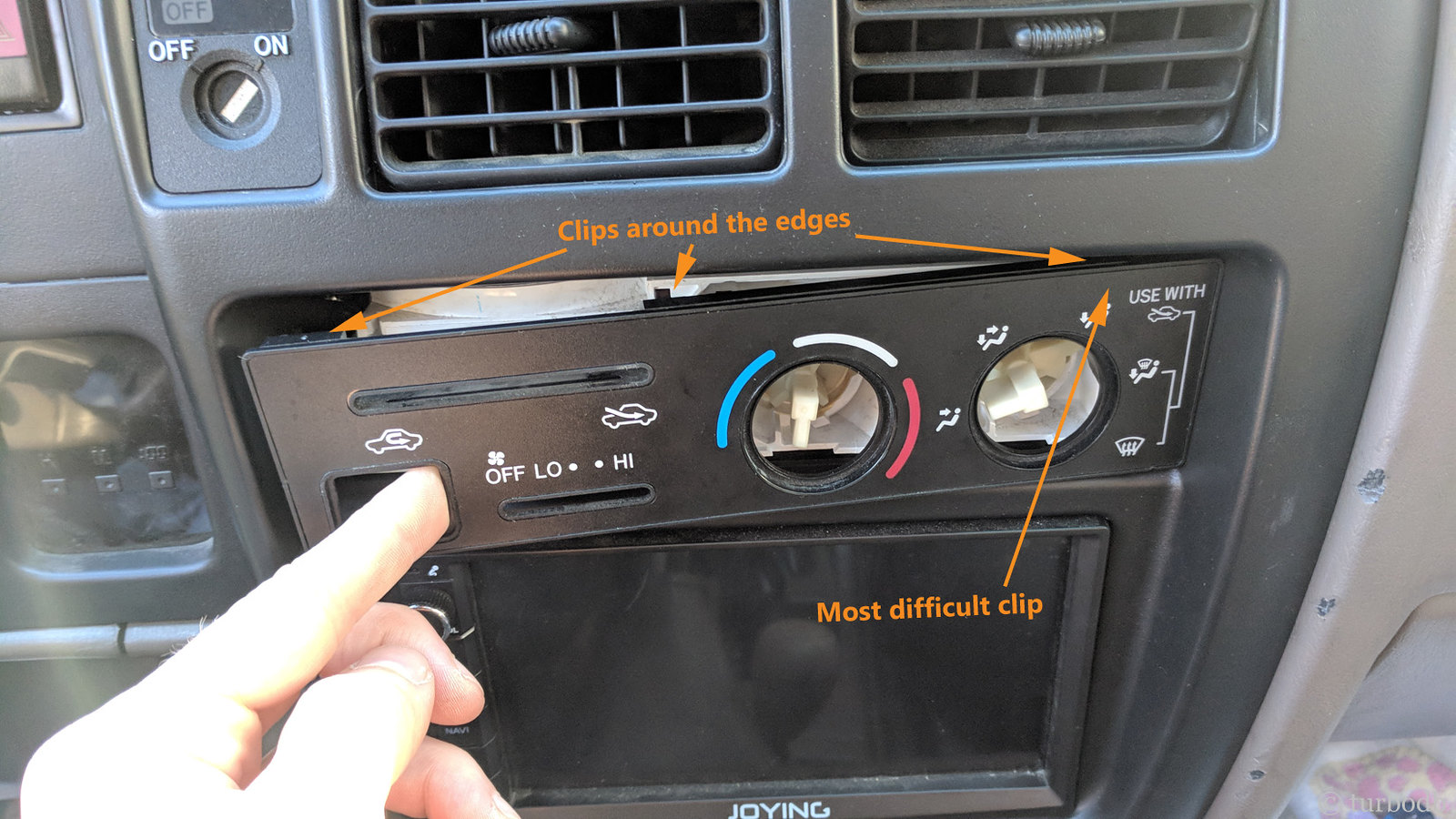 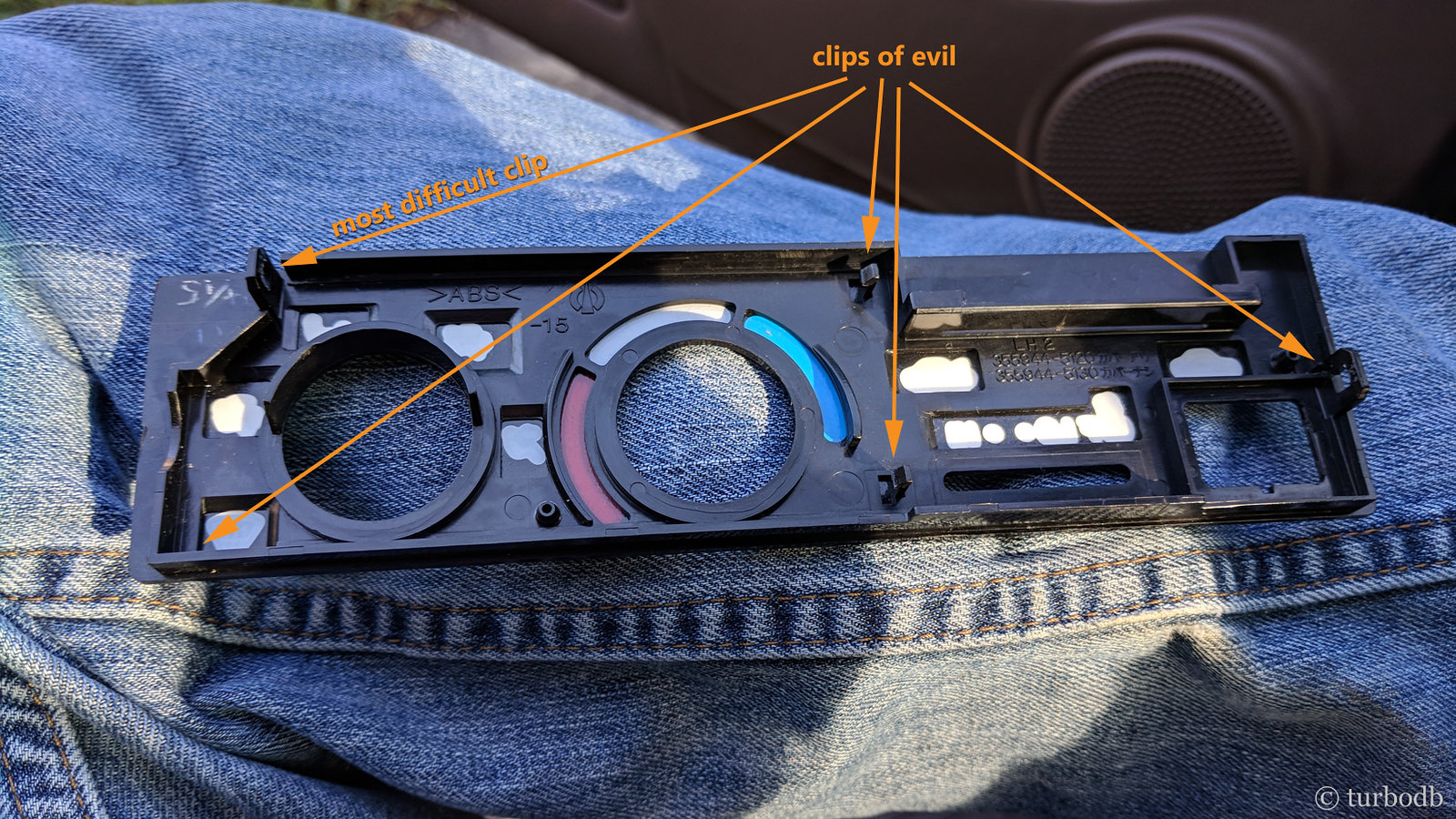 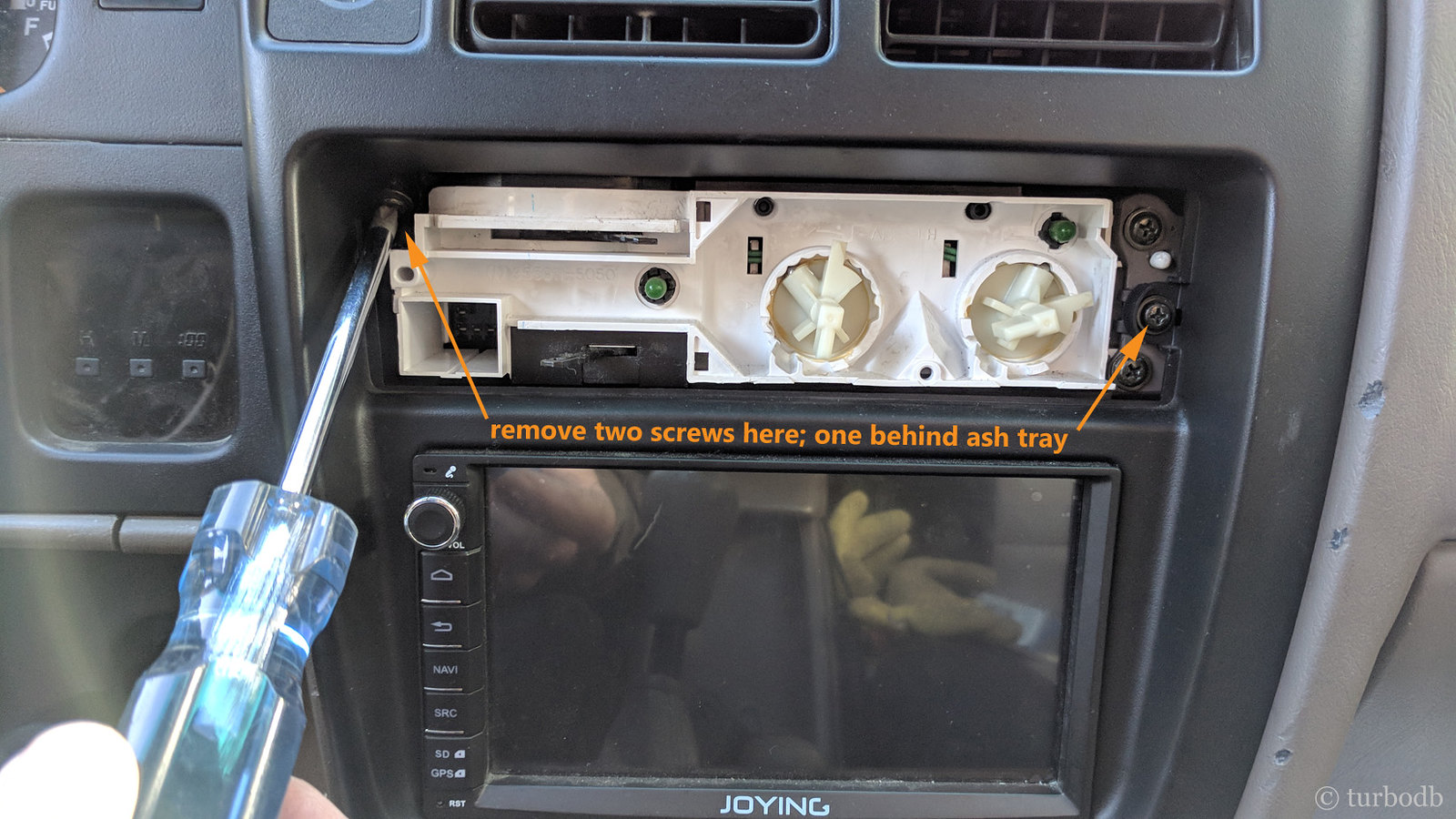 Then, slowly pry the center panel by pulling directly out. Start at the bottom and work your way up - the clips are unlikely to break, but do this gently as there are several wires attached. At the top, there are two clips and the A/C vents that hold the piece on, so you may need to apply a little extra force - but as long as you're pulling straight and don’t pull too far, you should be OK.

As the center panel comes out, disconnect the wires for the cigarette lighter and ashtray light at the bottom, if you have them, the ABS switch (two plugs) at the top. 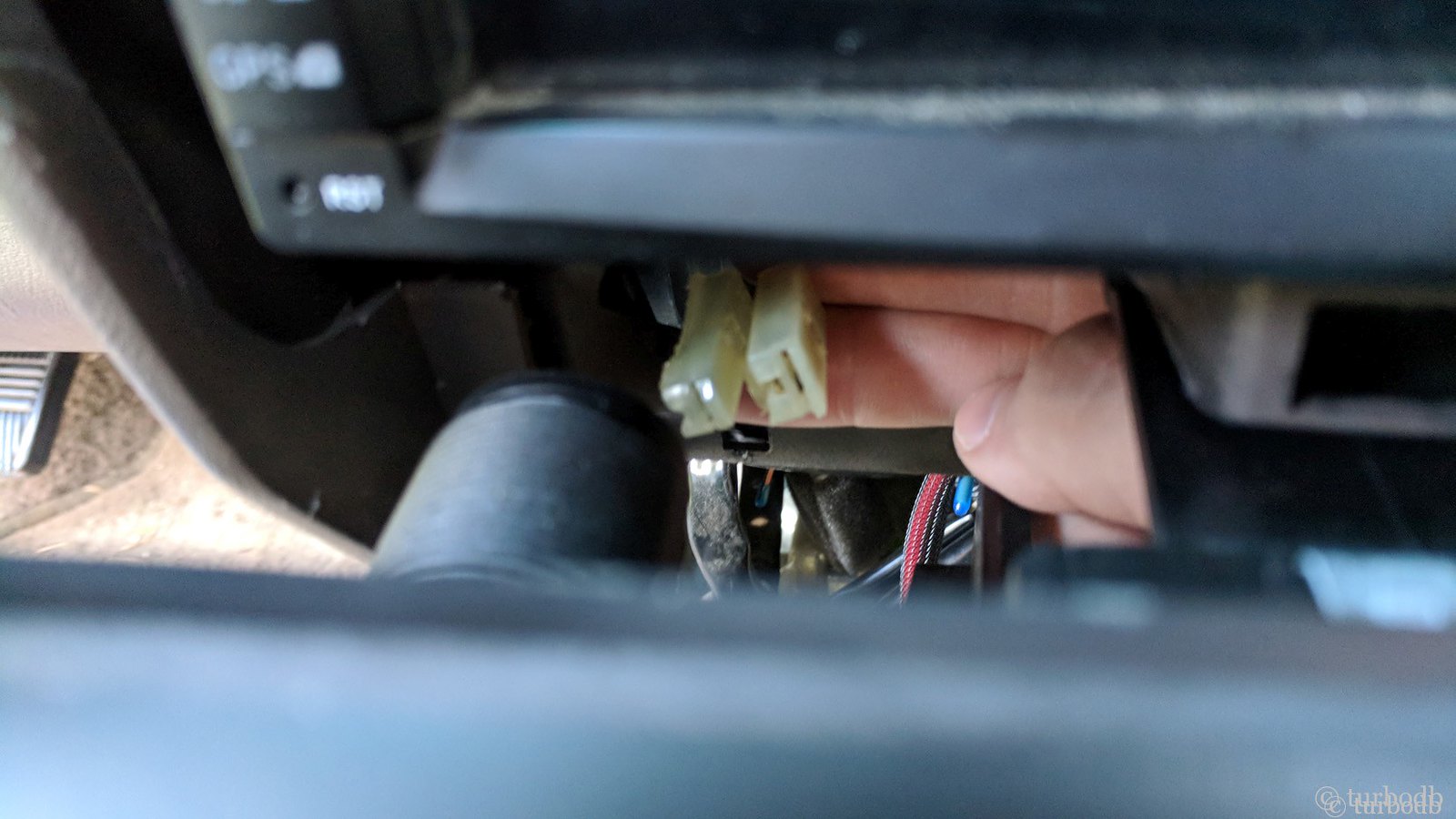 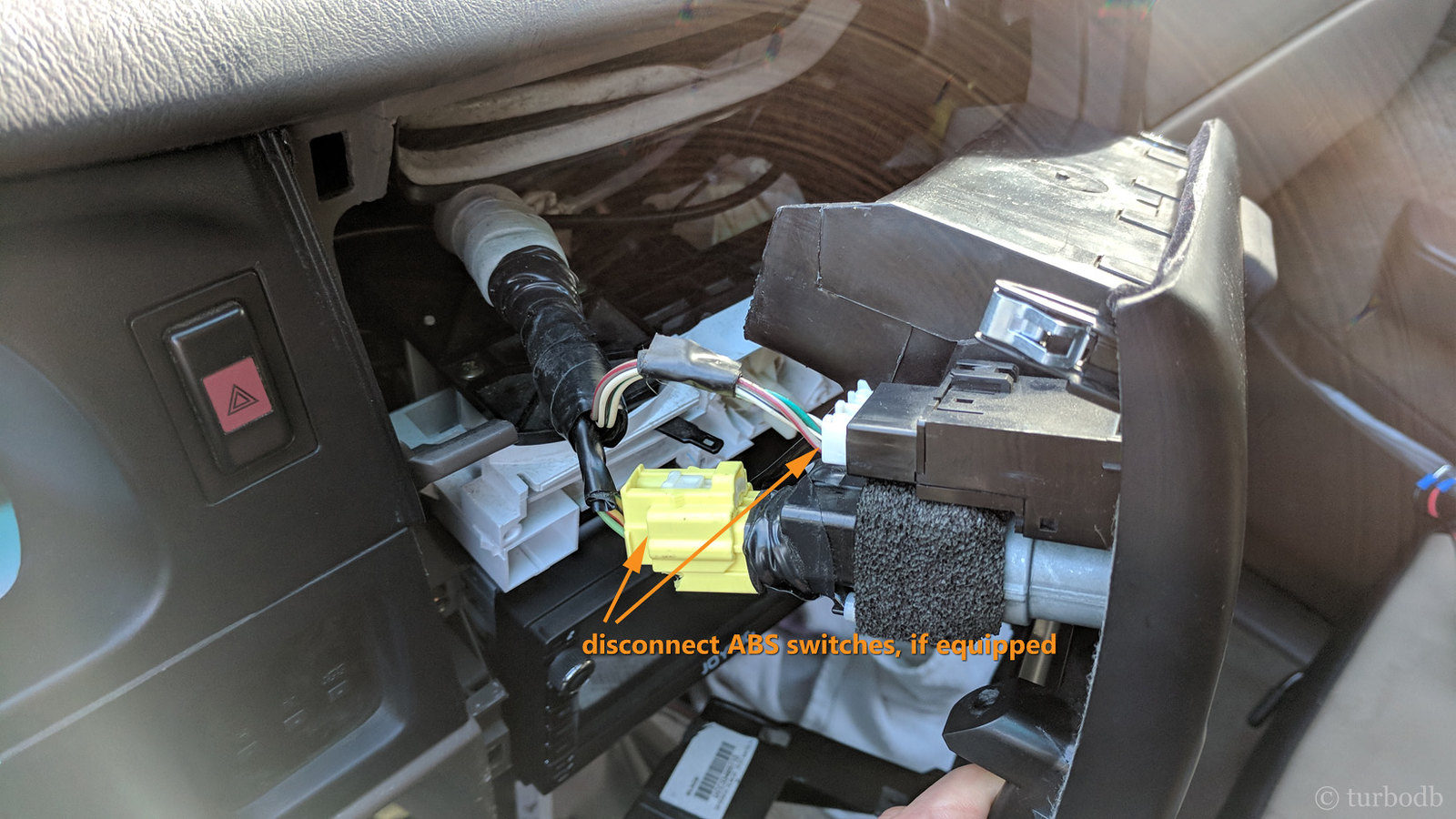 Next, it's time to remove the lower finish panel in the driver footwell. This one is easy - a single Philips screw and four 10mm bolts hold it in place. Remove them and pull the panel down. Be careful as the emergency brake cable is still connected - so just leave the panel in the foot well for now. 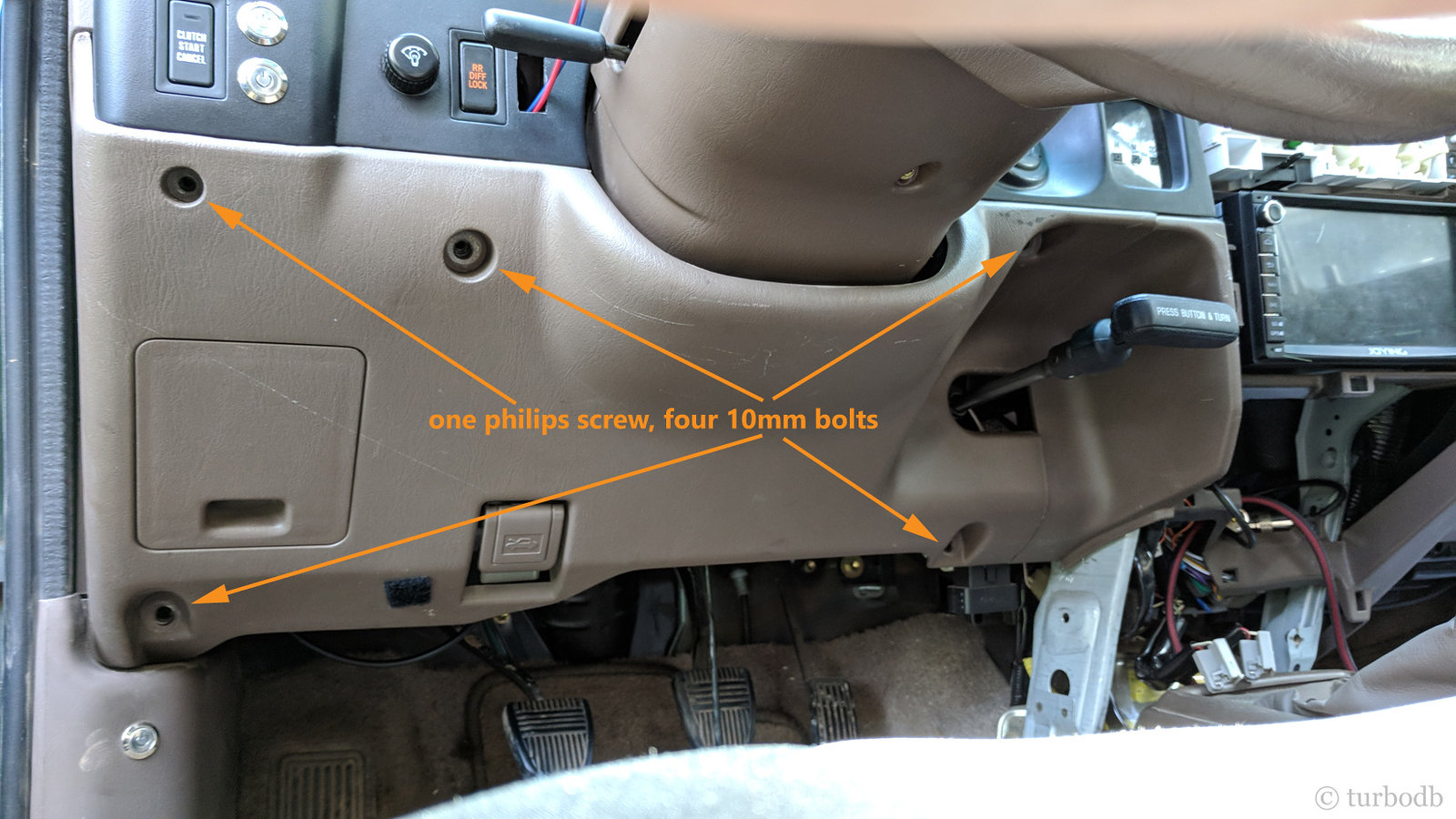 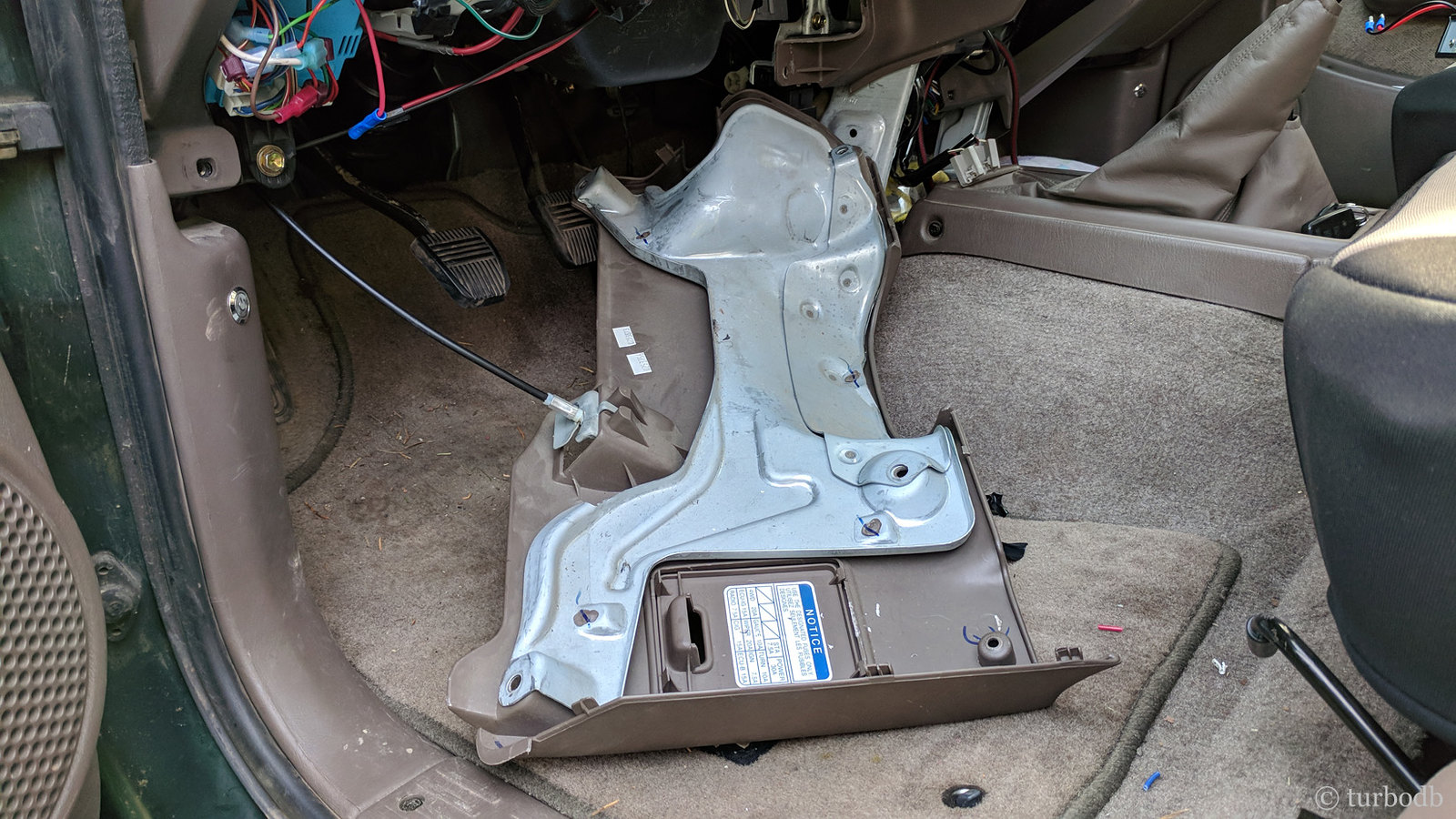 With the lower trim removed, the starter switch bezel and clock are the next piece to remove. This piece is held in place with clips only, and just pulls out. If you have the clock, don't pull too hard so that you can unplug the clock harness before setting the piece aside. 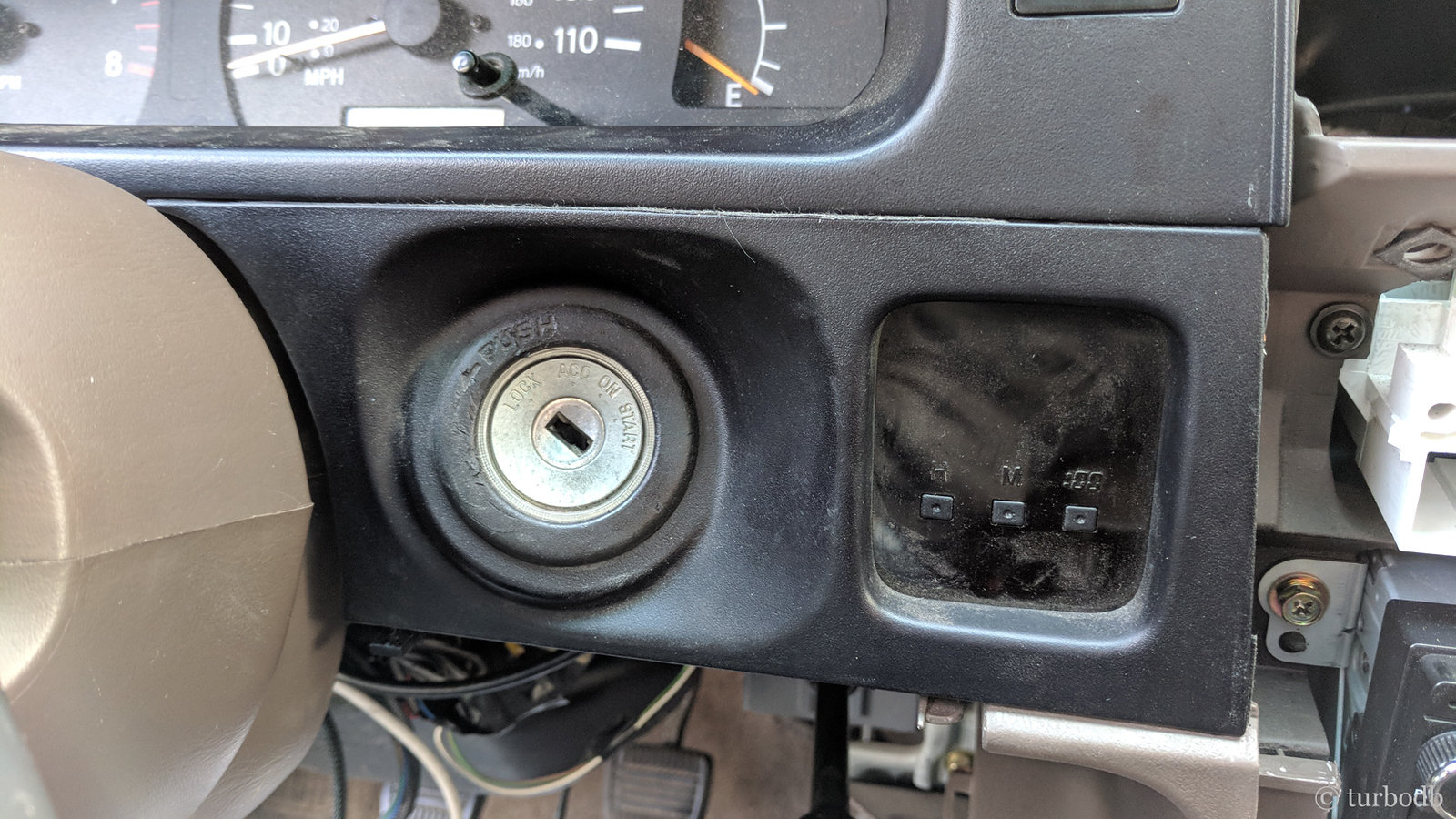 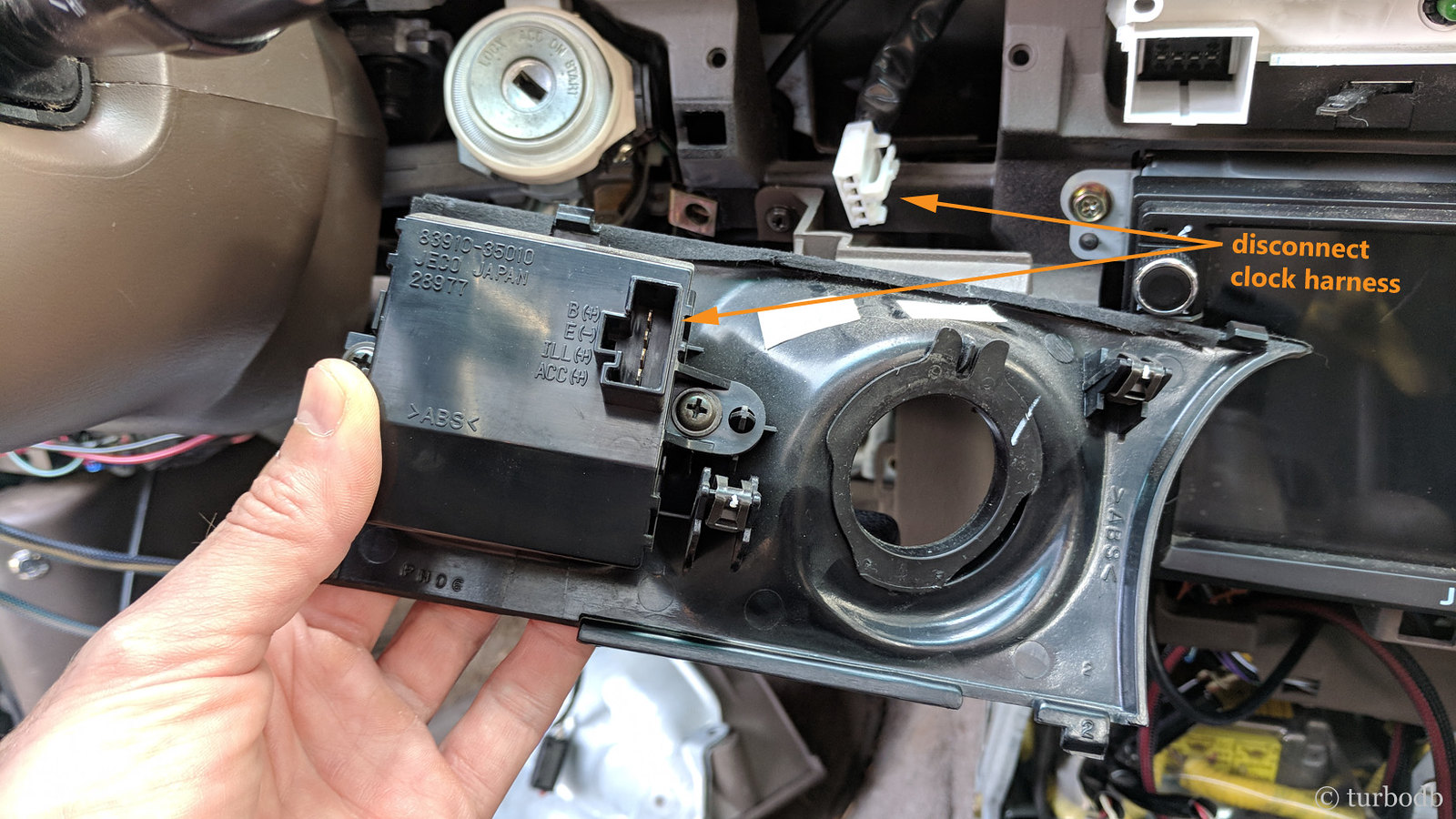 To remove the final piece of the dash - the cluster finish panel, around the instrument cluster - you first need to remove the steering column cover. Start by removing the single Philips screw on the bottom piece of the cover, and then turn the steering wheel 90 degrees left and right to access two screws behind the horn. Then, separate the upper and lower covers carefully (by pressing in slightly on the bottom piece to release the clips) and set them aside. 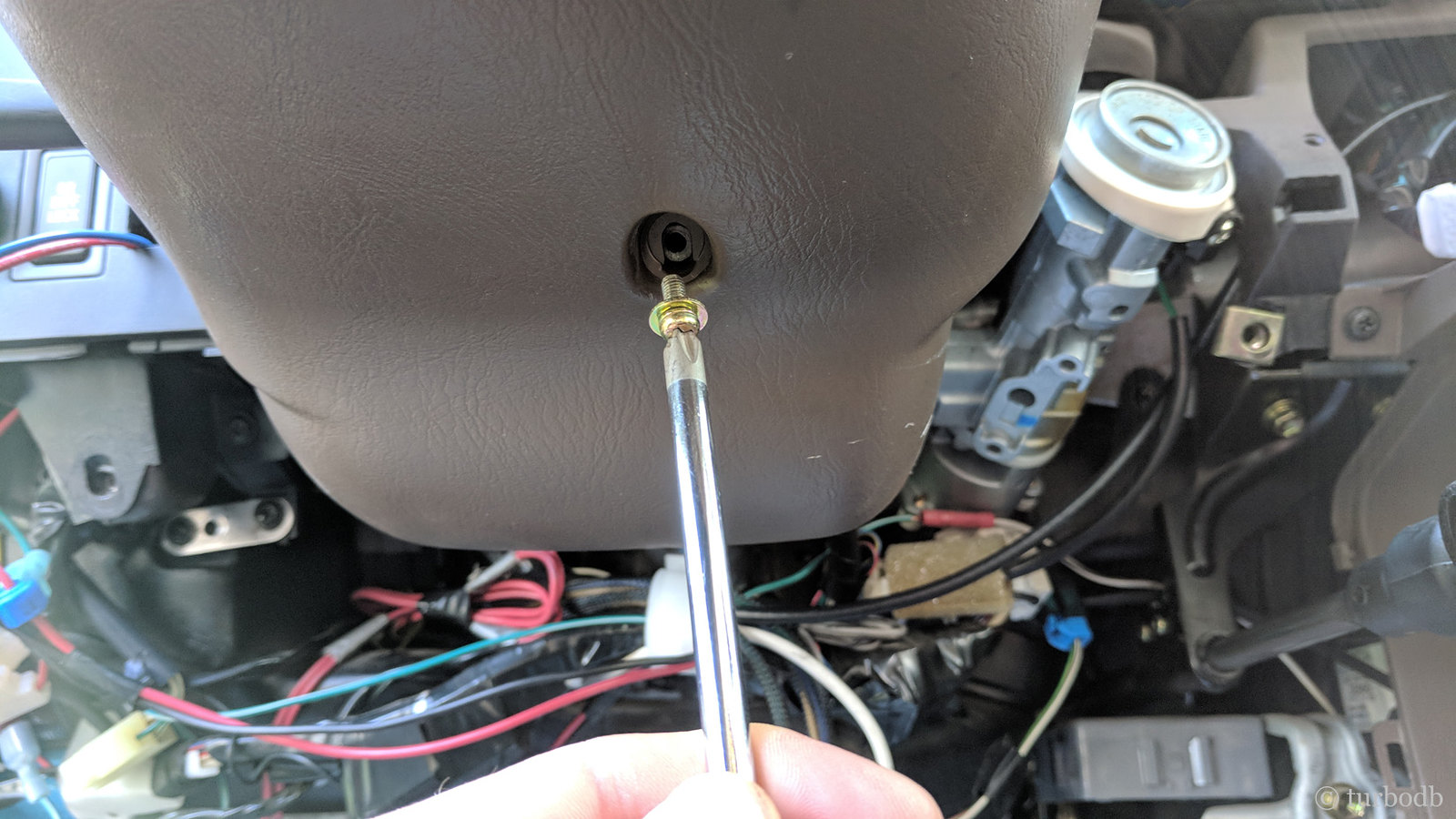 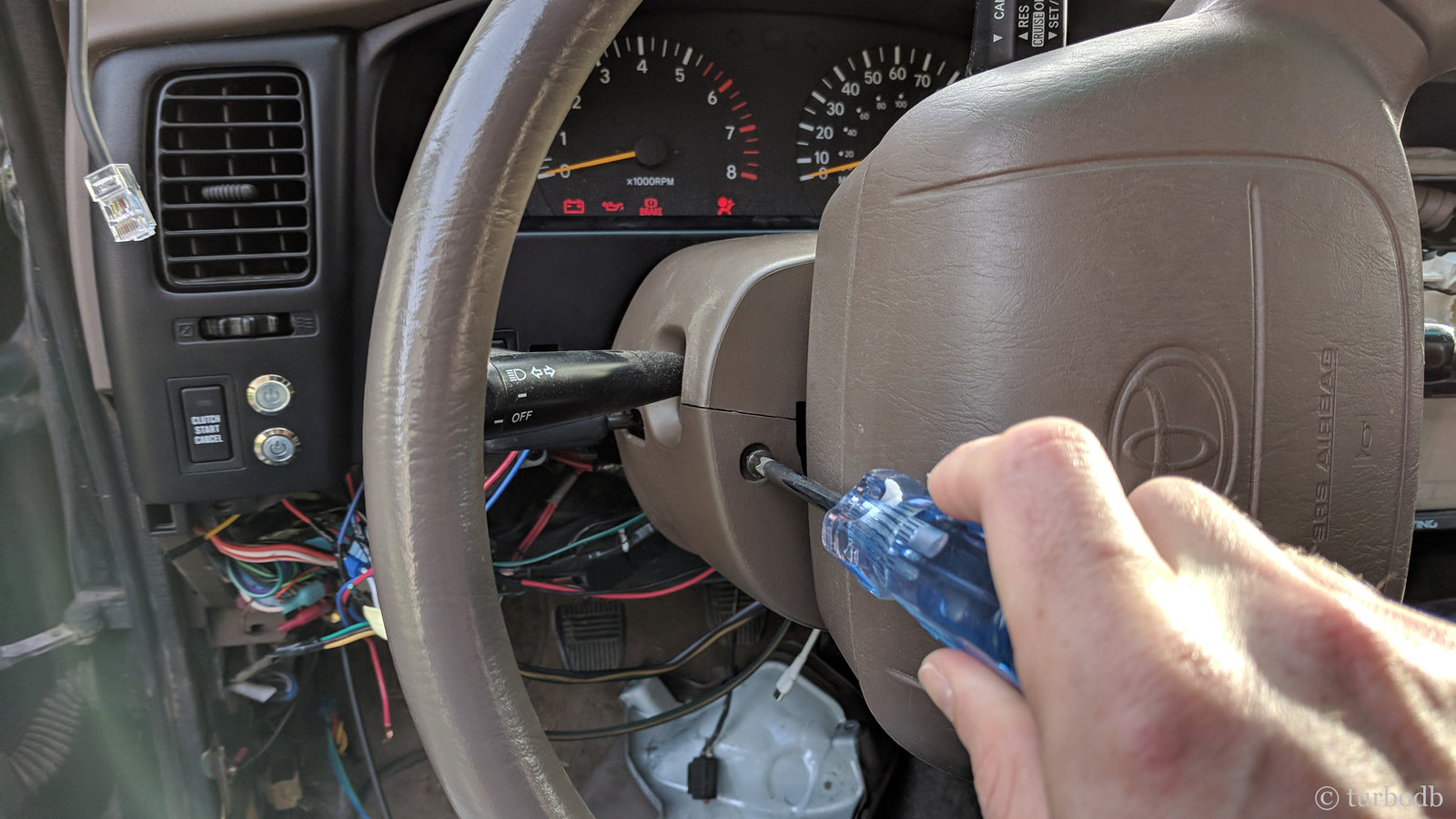 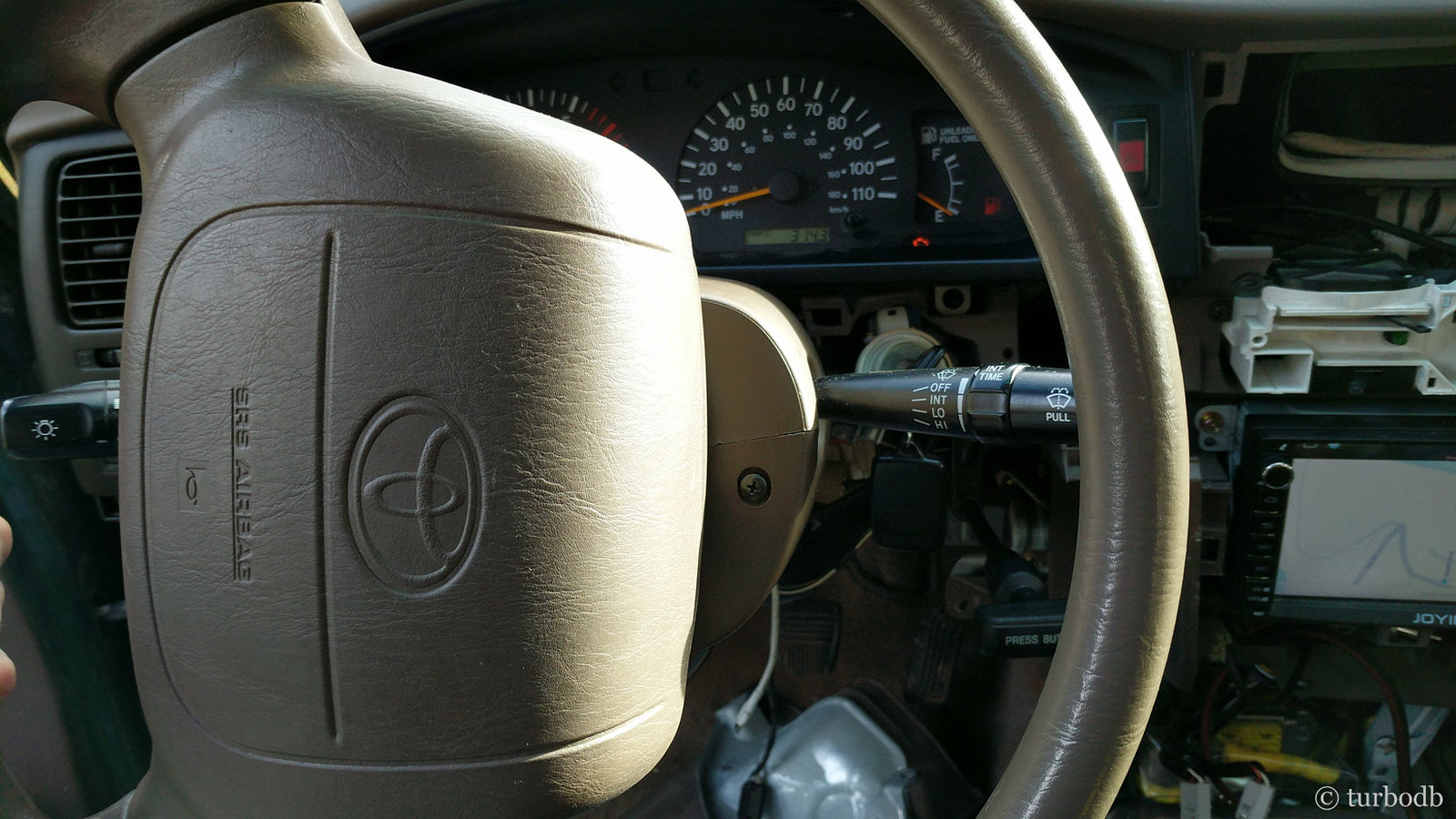 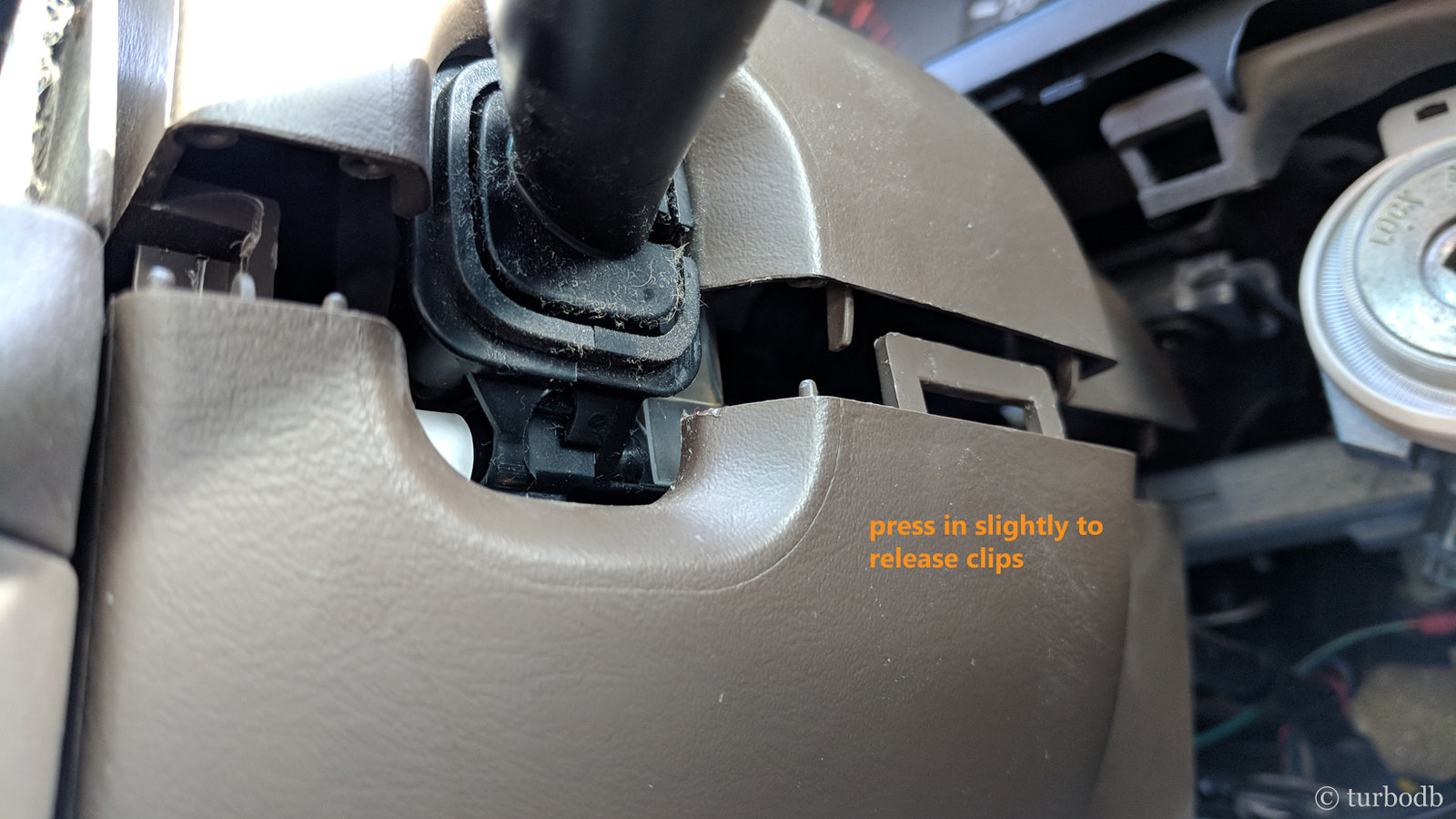 With the steering column cover removed, there is now room to slide out the cluster finish panel. Start by removing three Philips screws - two at the top of the panel and one on a tab just below and left of the steering wheel. 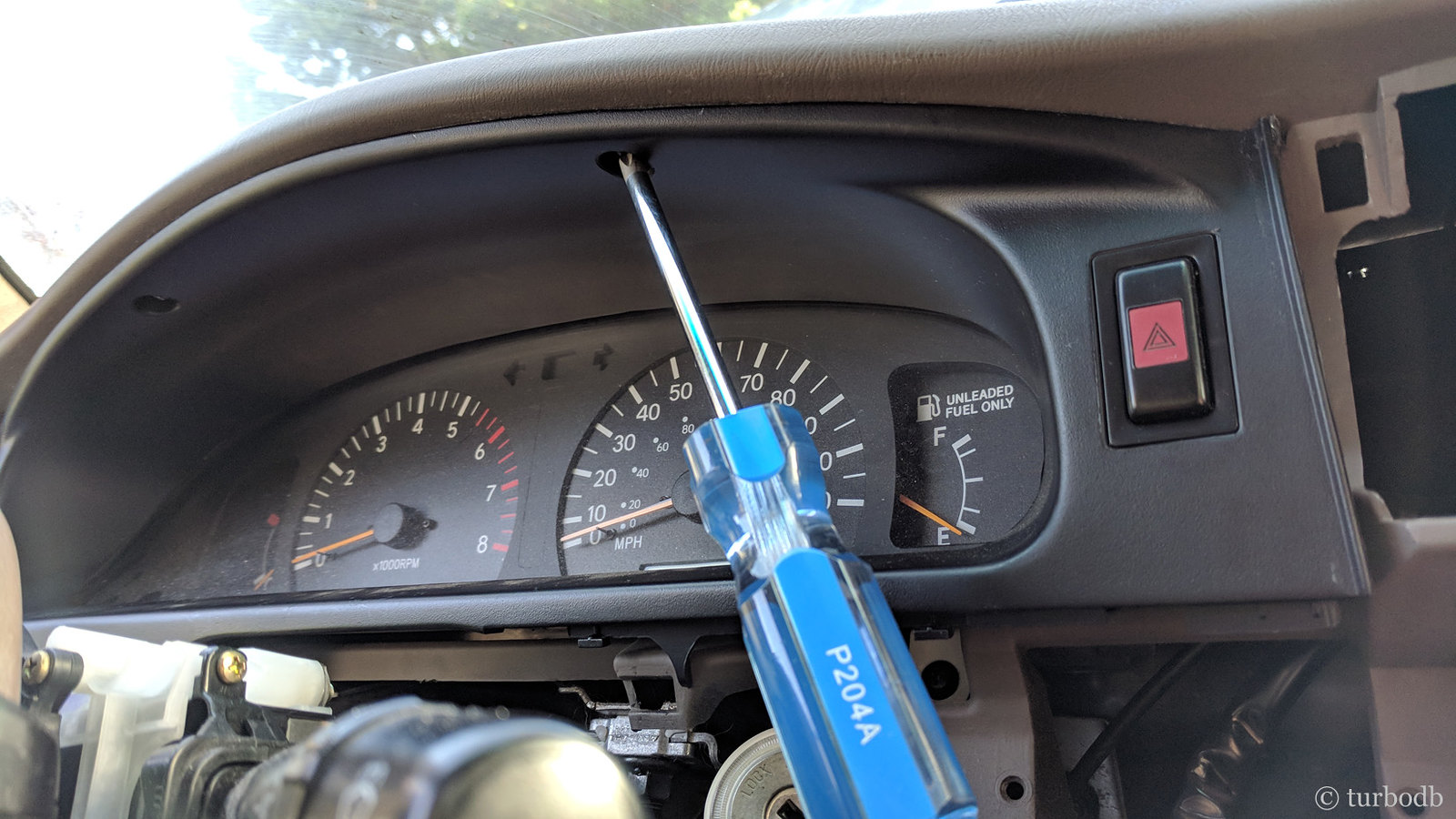 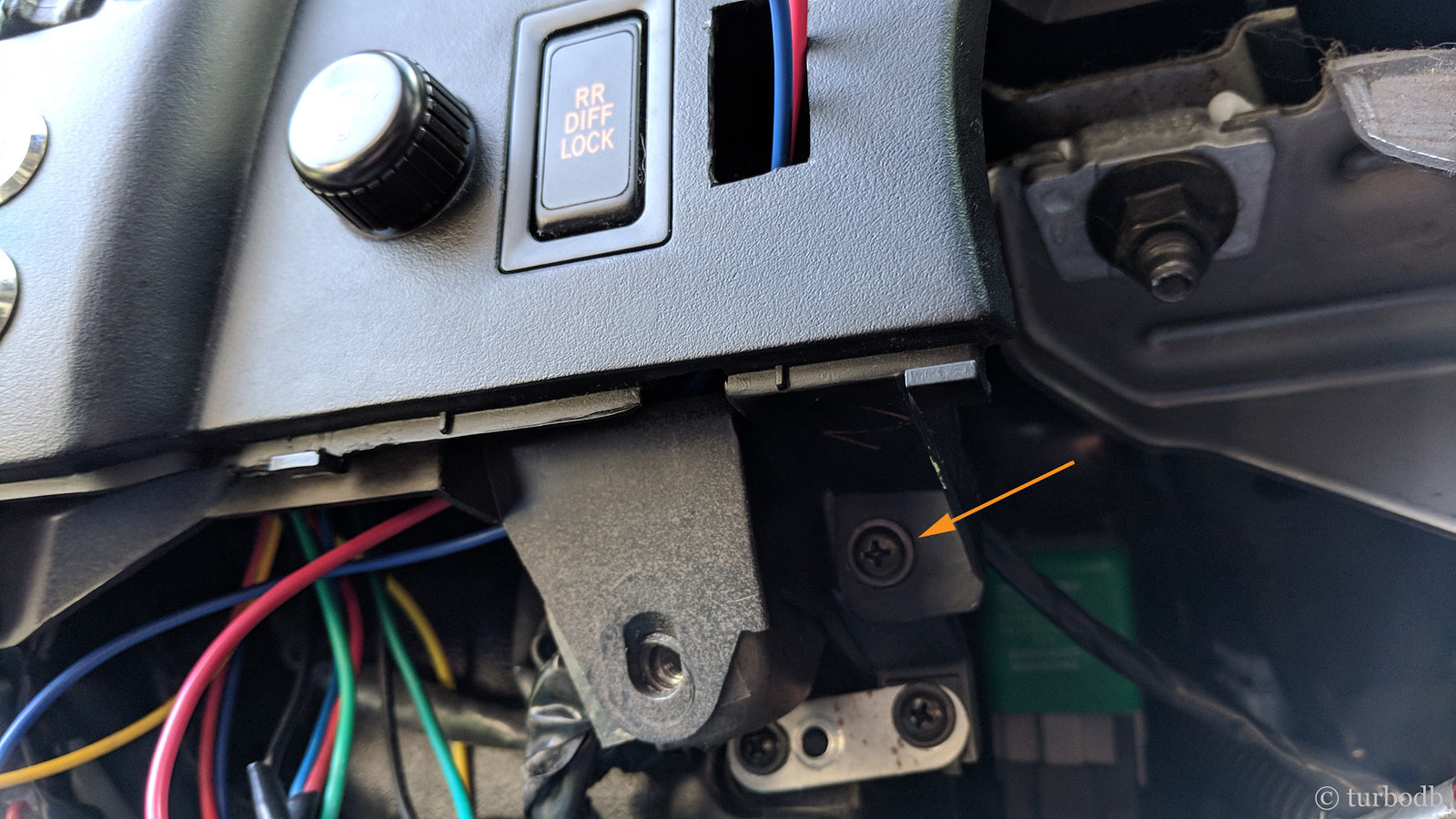 Next, pry the cluster finish panel away from the cluster, but just slightly, for two reasons:

Each one of these has a different connection mechanism, so take it slowly and curse Toyota engineers as you go. Eventually, you'll get each one disconnected (and in some cases, the switch may remove itself from the panel, which is fine (and can make disconnecting it easier). 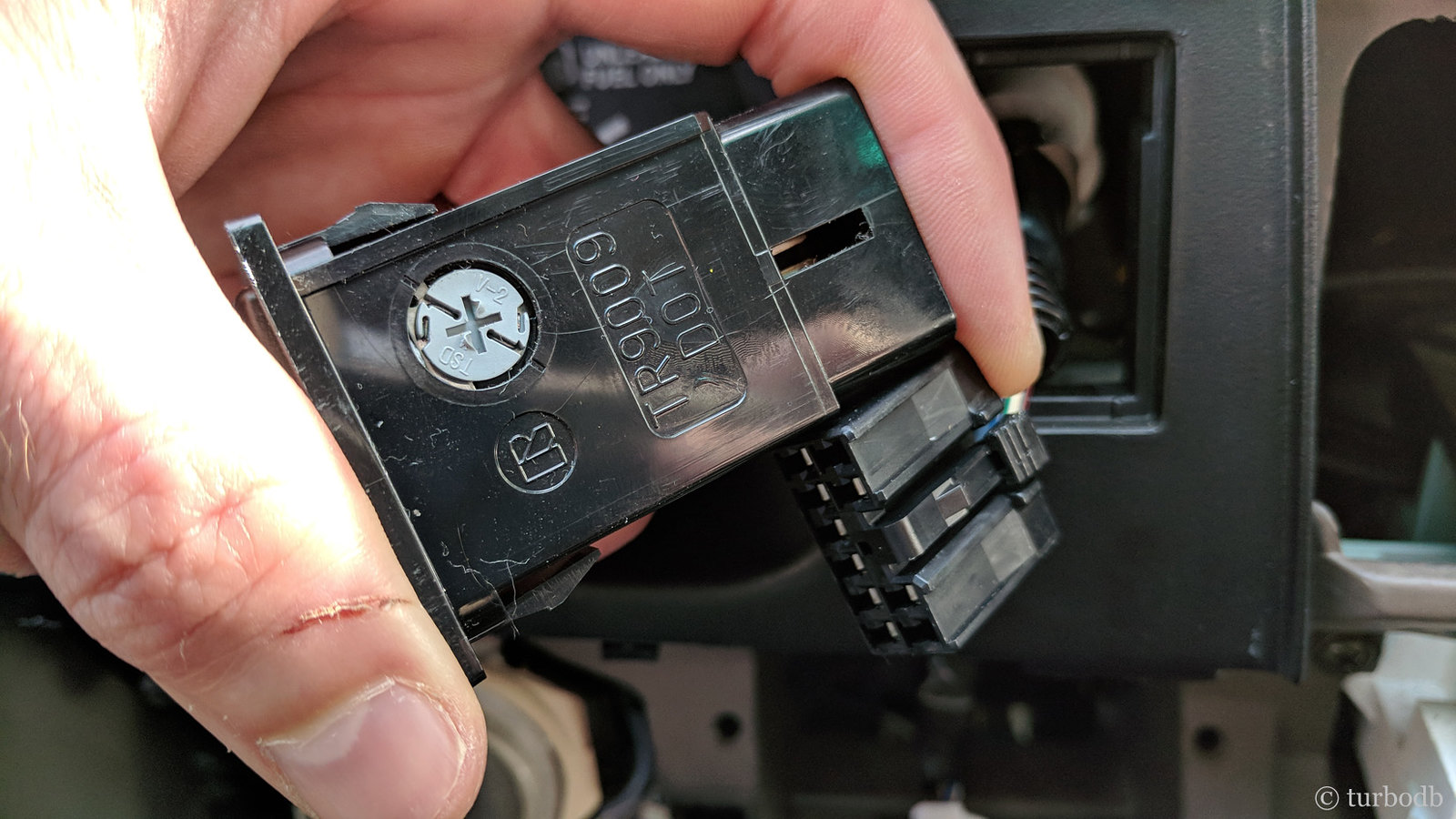 With all the switches removed, you can now remove the cluster finish panel. The dash trim is removed. 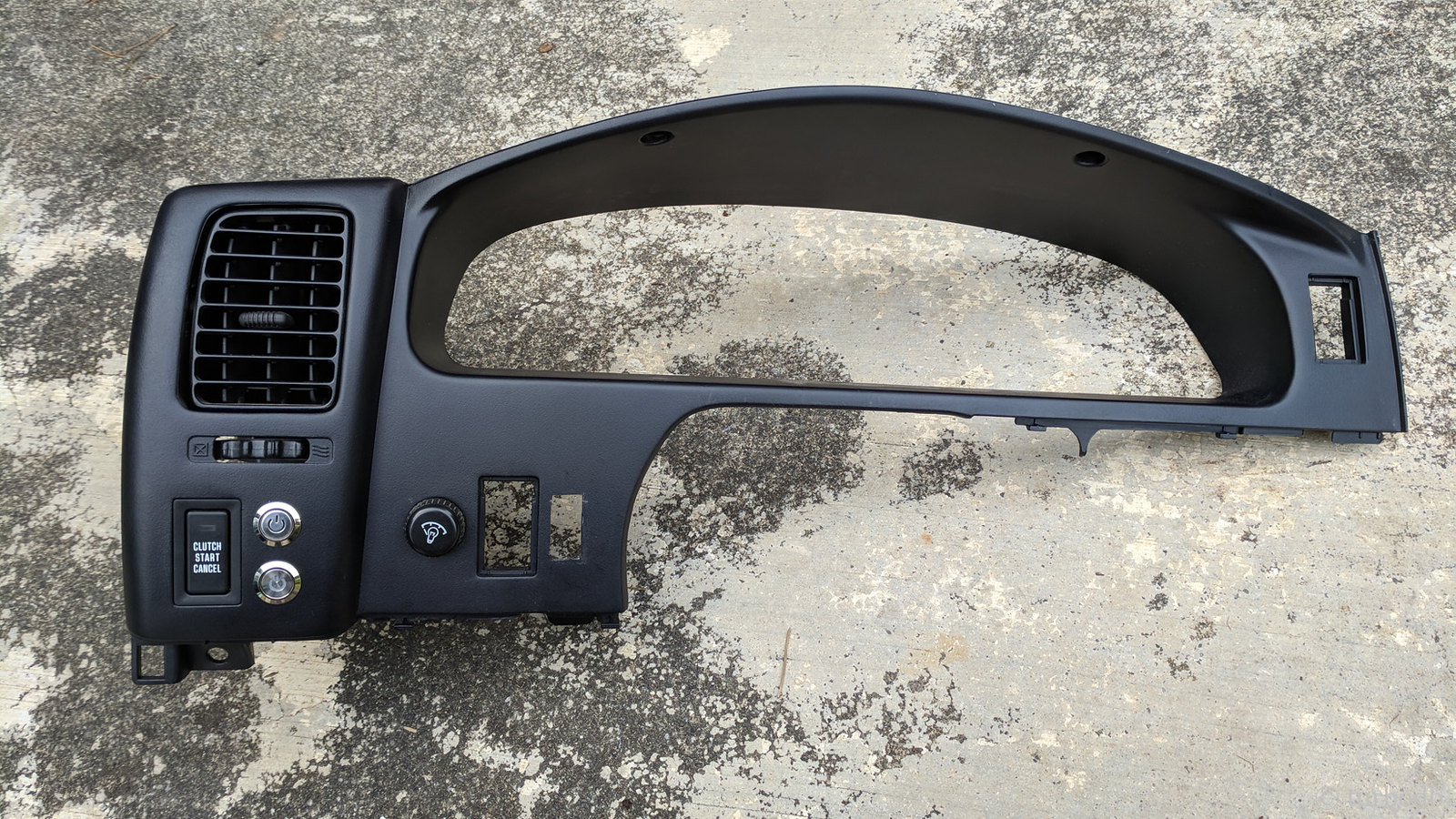 Removal of the instrument cluster is straight forward - there are 4 Philips screws, two per side. After removing those, pull out the cluster carefully and disconnect the wiring harnesses.

Installation is the reverse, and (I find) much easier than removal.