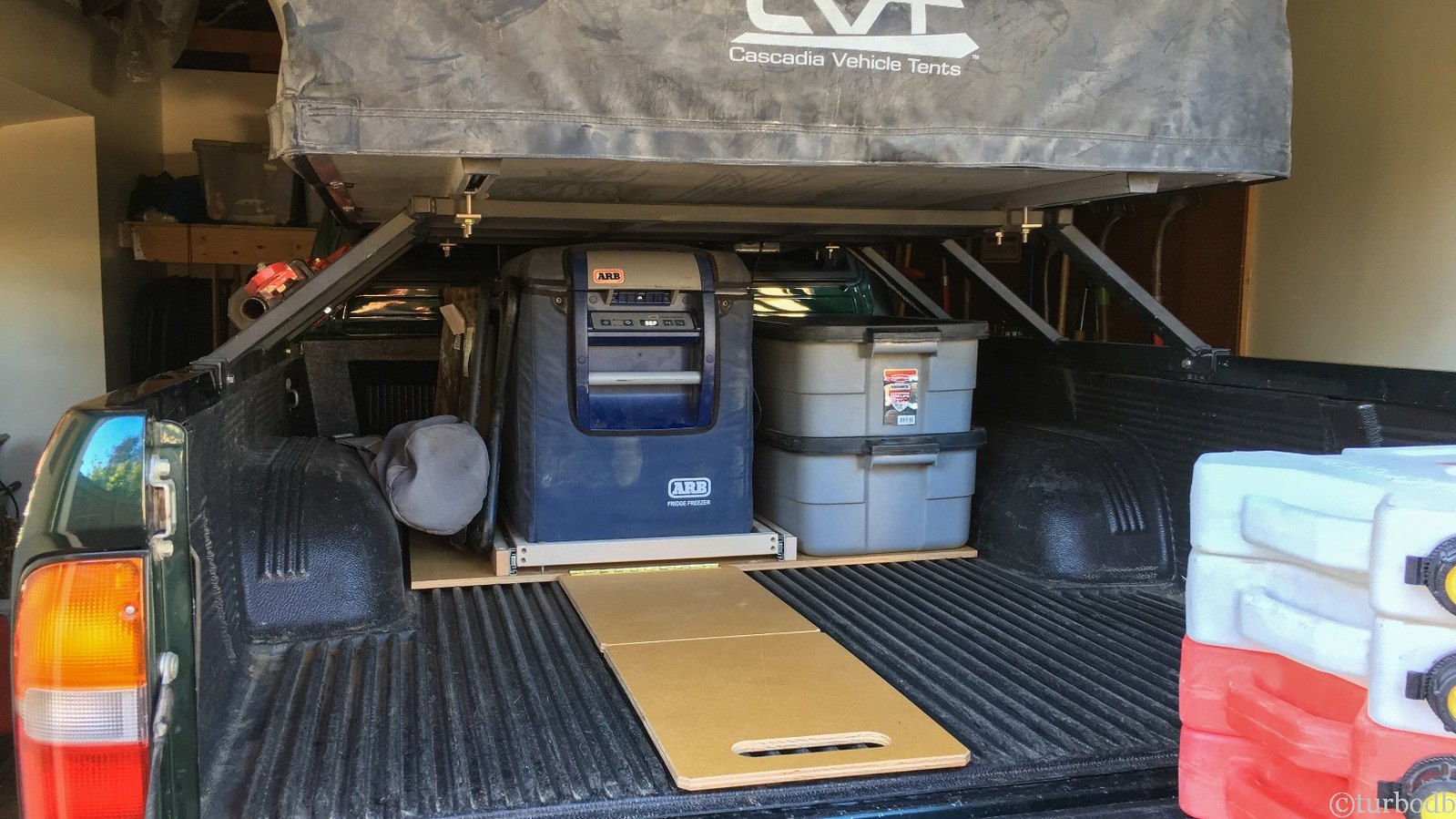 Bed Slides on the Cheap

As soon as I installed the bed rack, I knew that there were going to be trade-offs - on the one hand, it made for a much nicer sleeping experience with the CVT; on the other, it was a lot harder to get stuff that was in the bed of the truck. Like the cooler, and kitchen stuff.

Don’t get me wrong, it’s a trade-off that’s totally worth it. But what if it didn’t have to be a trade-off?

What if I could have my cake and eat it too? That’s what I thought when I heard about and then saw this - BedSlides. I mean, for a cool thousand bucks, I could easily get to everything in the bed. 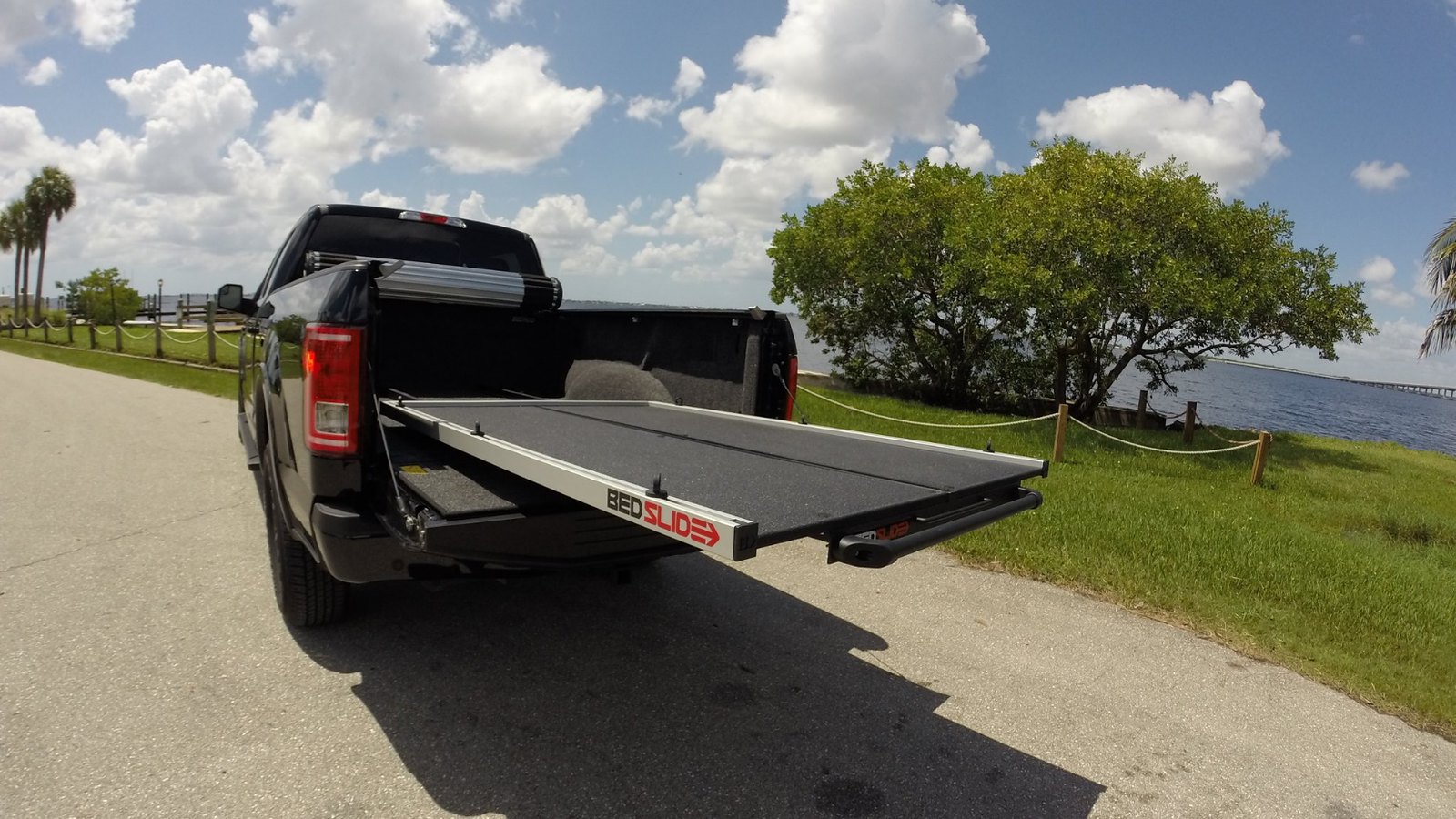 There were just two problems: First, it was a bunch of extra weight I’d be putting back there all the time. And boy, I’ve already got a lot of extra weight back there. Second, it would add 4 inches of height to the bed. Not a big deal for most things, but I only had 3 inches of clearance for the ARB fridge.

The fridge is a life-changer, so there were no BedSlides in my future… and then I got to thinking… which is dangerous: “what if I made my own?”

At first, I was thinking through a plan that would mimic the design of the commercial slide. There was no way I could do that for a reasonable amount of money (5-foot drawer slides cost hundreds of dollars). And the thing would weigh a ton - part of the reason I didn’t like the commercial one.

And then it came to me: as a strapping young lad, I just need some way to push/pull stuff in and out of the bed. What if I were to simply slide it on a piece of plywood? It’d be cheap. It’d be functional. It wouldn’t weigh much. It wouldn’t raise things up off the bed too much (so the fridge would fit).

It was worth a try.

Knowing that this would be outside, I opted for some ½” MDO plywood (the MDO would have good weather resistance) and I lucked out when I discovered that the local traffic guys were getting rid of some of their older signs.

I picked out a “RIGHT LANE CLOSED AHEAD” sign that was 48x48 inches and got to work. 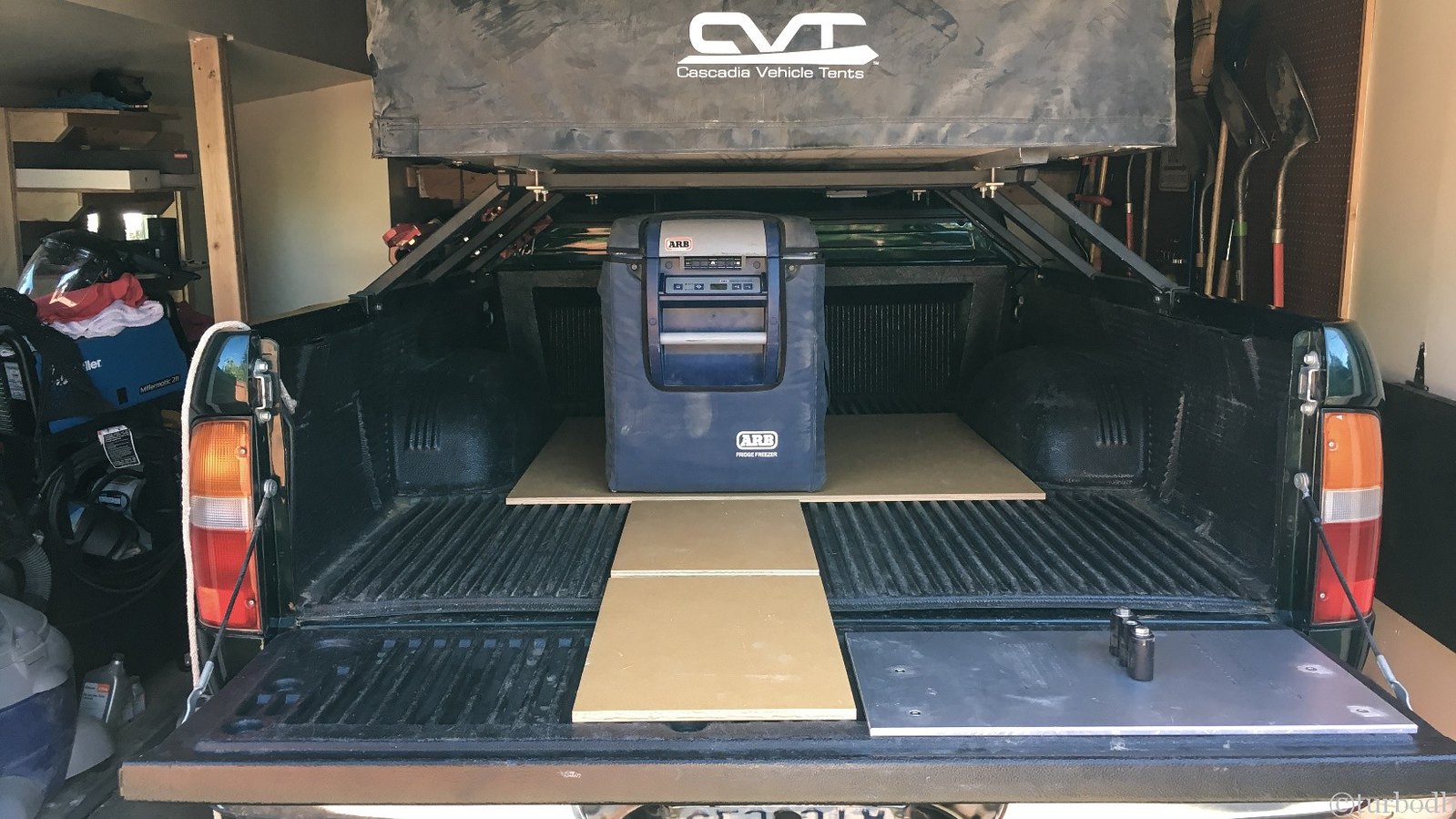 In the end, I used a 39" wide by 36" deep piece as the main "slide." That was big enough to fit the fridge, all of our kitchen stuff, and a bunch of other gear that's always harder to get out of the bed. Then, I used the remaining 12" that I'd cut off to build a handle that I could use to pull the slide in and out of the bed. I made the handle in sections, so it can fold up in the bed, or fold down over the tailgate for easy maneuverability.

I also added a maple runner on the bottom of the slide panel to keep it aligned in the bed (it runs in the grooves of the bed liner). 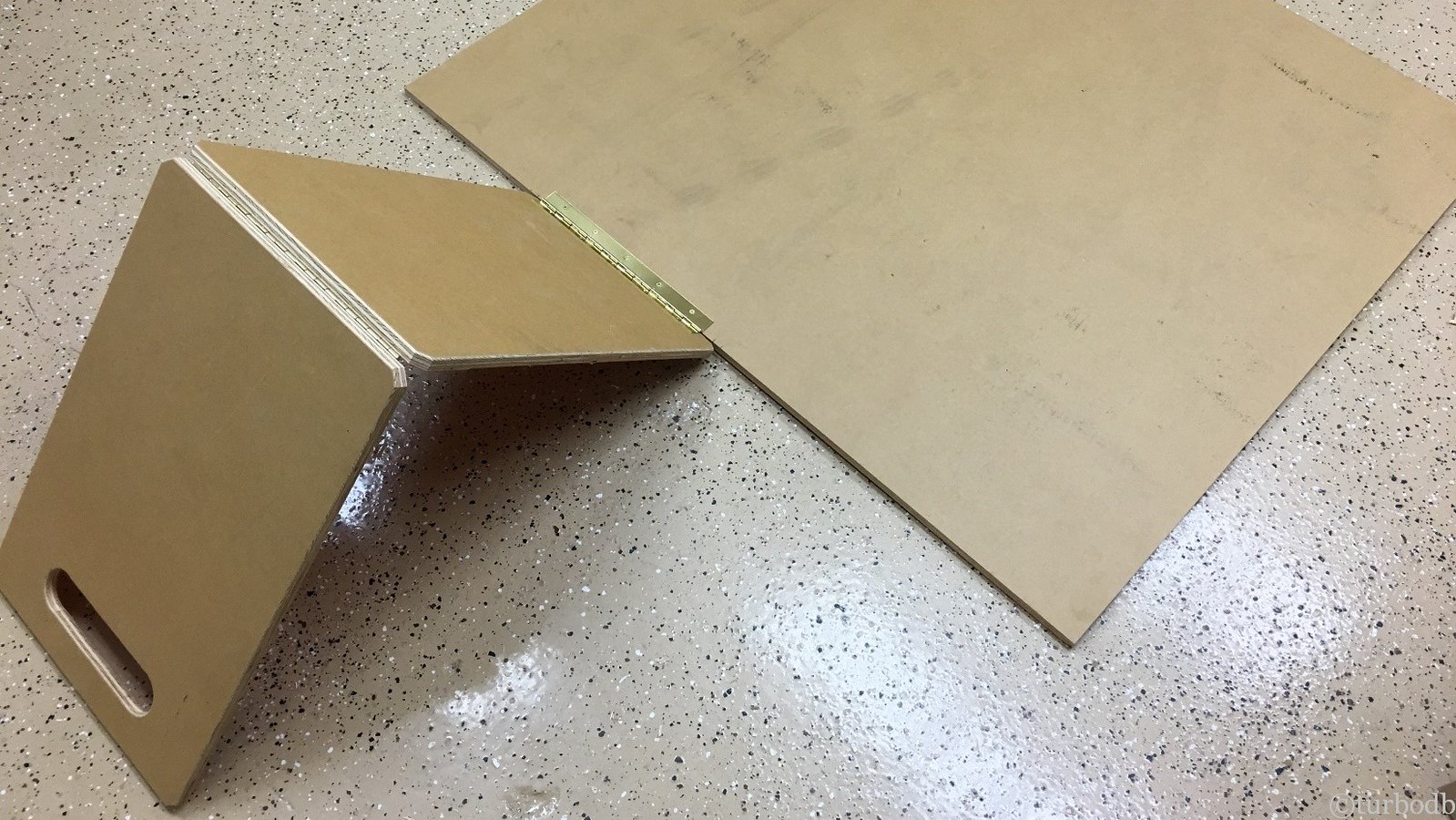 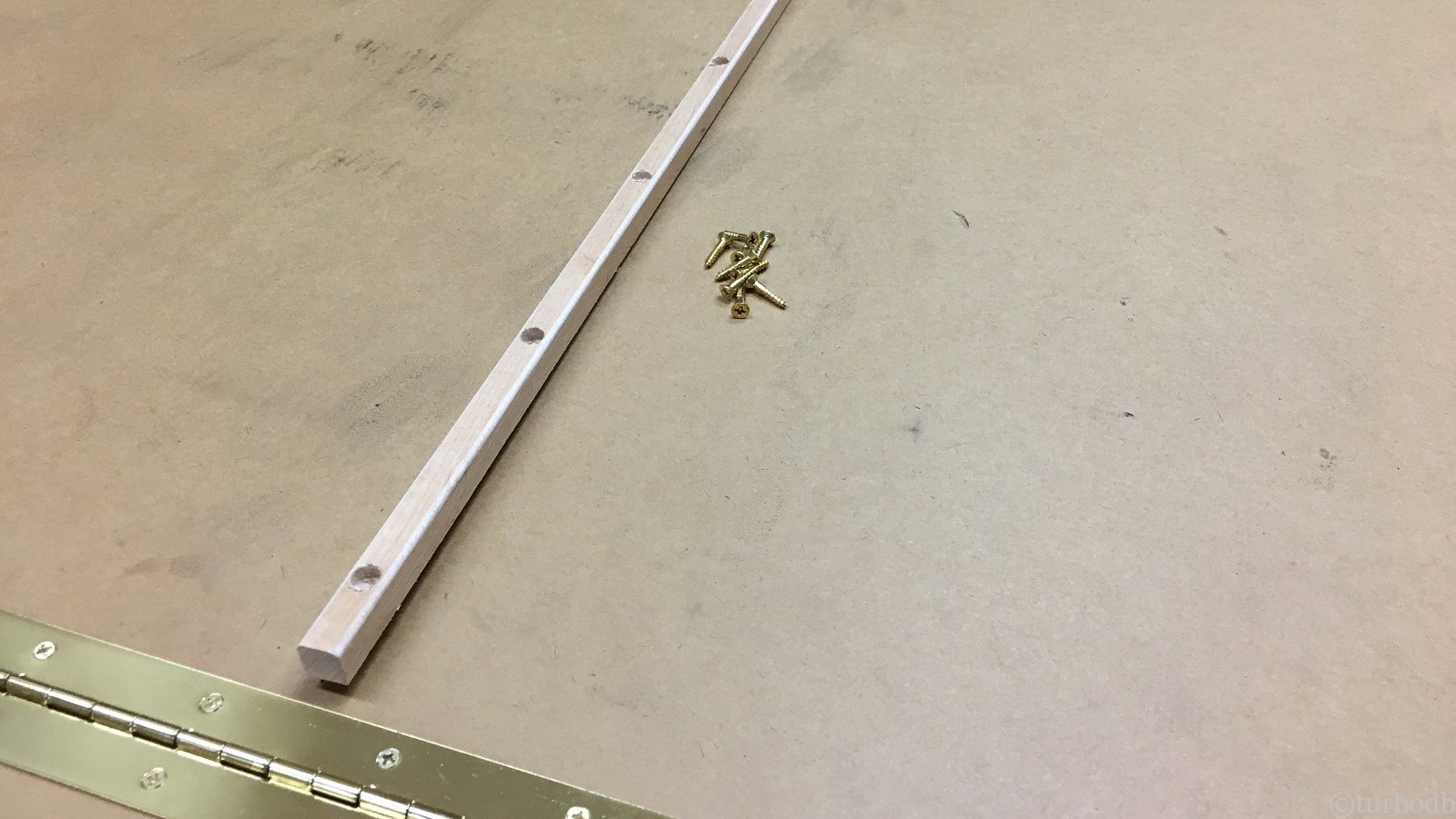 With the slide complete, getting to items in the back of the bed was easy. Pull out with the handle; push in with the handle. But there was one problem - even when pulled all the way out, the fridge was still a bit too far back in the bed; opening the lid would cause it to hit the CVT.

No problem I thought; I can create a small shelf on some drawer slides, and that'll get it to slide out another 24 inches. And it did. And it worked. 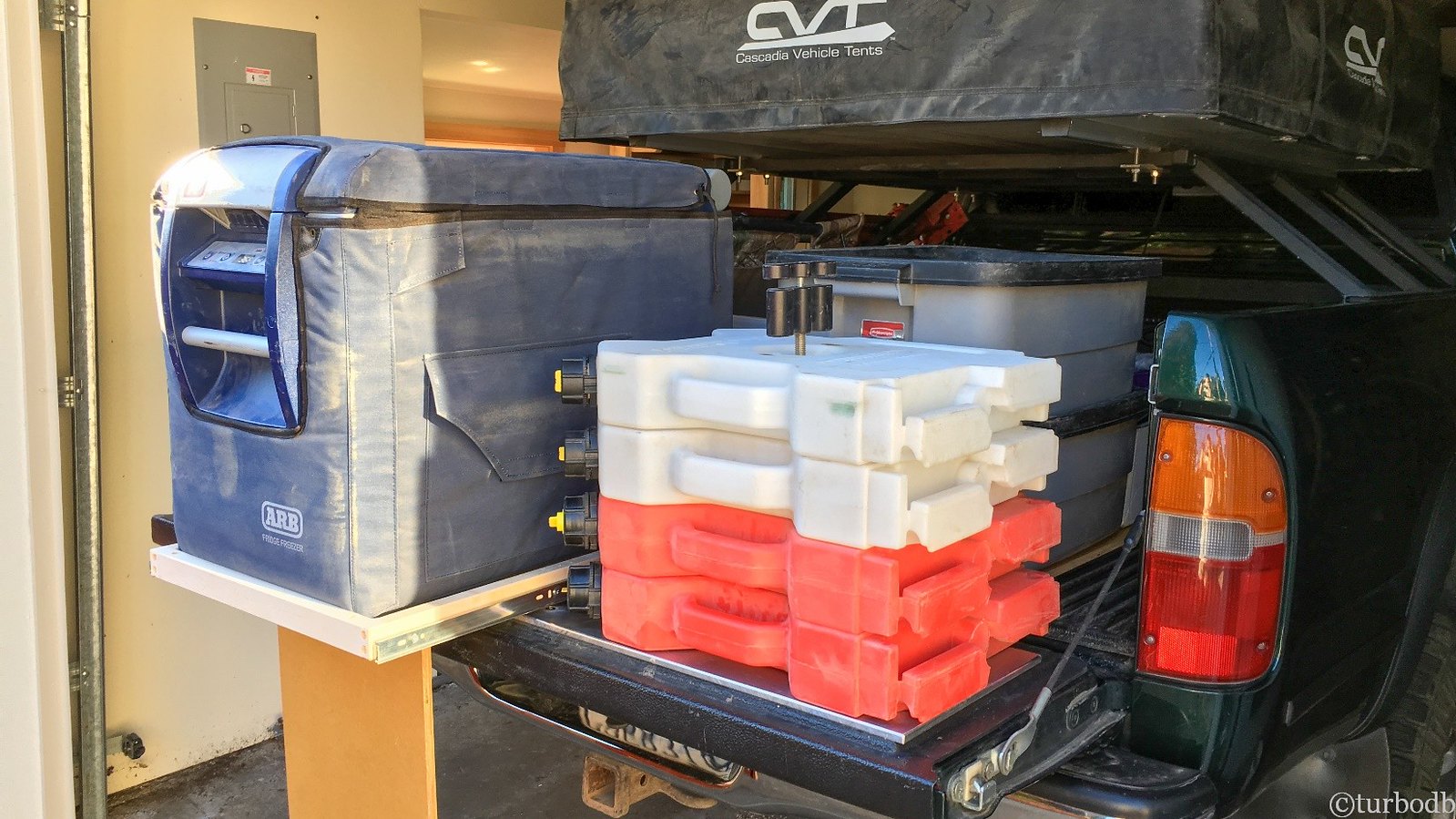 Overall, this turned out great. The only thing I had to buy was a pair of drawer slides, but even if you had to buy everything, it'd be under $100. And it's super functional, and easily removable; you know for the 95% of time you don't need it and just want to use your truck like a truck!