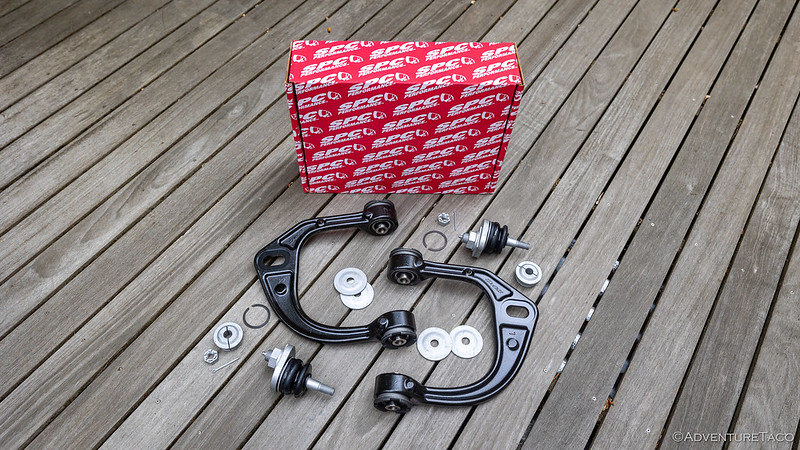 Note: There is an important update below.

It was more than three years and 120K miles ago that I installed SPC UCAs on the Tacoma. Shortly after installation, SPC came out with an improved design that was a single forged piece of material, with an entirely new type of joint. That joint - which they call the "X-Axis" joint - was essentially a sealed spherical bearing that replaces the polyurethane bushings where the UCA is mounted to the frame.

And so, when I took the truck in for an alignment and the alignment tech (a good one, which can be hard to find) mentioned that my UCA bushings were in need of replacement, I had some thinking to do.

My options - as I saw them - were really twofold:

To find out more about option 2, I emailed SPC at 10:11pm on a Thursday evening to enquire about purchasing the X-Axis joints:

I'm interested in replacing the specride bushings in my SPC UCAs with the x-axis joints. I've got a 2000 Tacoma, running 25460 UCAs from2018 and am wondering which x-axis joints I'd purchase for my application.

It took less than 13 hours for Esteban from SPC to get back to me, which I thought was pretty darn cool. He let me know that while they could sell me some X-Axis joints, the more cost-effective route would be to get into their UCA swap program. As you can imagine, that entails me forking over several hundred dollars - essentially purchasing a set of the new forged (stronger) UCAs with X-Axis joints already pressed in. Then, after I replaced the arms, I'd send back my original SPC UCAs and SPC would refund most - but not all - of the money I'd sent them for the new arms. In the end, this option would cost about $250, but would also refresh my upper ball joints at the same time.

Now, my upper ball joints were just fine - so I didn't really need a refresh on them - and spending 5x as much for X-Axis joints compared to poly bushings seemed like a lot, but after a few more back-and-forth emails with Esteban, I learned that the X-Axis joints were lifetime joint that required no maintenance, not even greasing! With all the maintenance I have to do to the truck, I felt like not having to worry about maintenance of this part forever was worth every penny.

I originally posted this "upgrade" to the Tacoma about 5 weeks after installing the new SPC UCAs on my truck. When I did, the feedback was swift - many people with the new X-Axis based UCAs were having lots of trouble with them, and the X-Axis joints were lasting shorter periods of time than the previous SpecRide Polyurethane bushings had lasted me.

Here is a bit of the feedback I received (note, each comment links to the original for more context/replies):

The overwhelming negativity of the feedback concerned me, so I started up an email thread with SPC.

So, I recently posted about my (great) experience installing the new SPC UCAs with the X-Axis joints (that you helped me with): Replacing my SPC Upper Control Arms …with SPC UCAs

As part of that, I shared the experience on my various channels, and I’ve gotten some “interesting” responses that worry me a bit. Lots of folks are saying that they’ve gone through the X-Axis joints much more quickly than the Poly bushings that I was previously running (where I got 120K miles on a lot of dirt). That surprised/worried me, because I was under the impression that these were no-maintenance, lifetime joints per our previous conversation.

The response I got was not ideal (Note: I've removed names of SPC employees, as I understand that they are just doing their job.)

Sorry for the misunderstanding about the warranty on bushings or ball joints. They are 3 years or 36k. Are you having issues with them already?

Shocked, I sent a follow-up email - what would be the first of many - and finally had a phone call with SPC, where I shared that:

Wow, I’m very disappointed to hear that the service life on these is 36K miles, given that I got 120K miles out of the poly bushings. Add to the fact that the poly bushings are replaceable for $50, and the X-Axis require an entirely new UCA purchase, and I feel like I’ve been swindled a bit here.

In fact, at 36K miles, these arms will last me only a single year - I put 40K miles/year on my Tacoma - which is ridiculous. I think I’d like to go back to the original arms (or, a poly version of the arms) and get my $250 for the X-axis arms refunded.

Can you help me make that happen?

The answer - perhaps to be expected - was that there was no way to "go back" since my original arms had been thrown away on receipt, and SPC only makes the new-style UCAs now. Not only that, but they are completely discontinuing the SpecRide bushings, so whatever is left in stock... is it.

Through all of this, they did say that they want to stand behind the new X-Axis joints, and that I should keep an eye on them over the next few years. If there's a problem, they (say they) will swap them out under warranty. That's a good thing (assuming it is true), but of course, part of the reason I made this switch in the first place was so that I'd have less maintenance over time. It appears that in reality, I'll have more.

I can't say that I'm happy with how this all worked out. Personally, I think I'd have preferred to buy a few of the (now discontinued) SpecRide bushing sets to keep on hand, replacing them as necessary over the next 5-10 years, rather than gambling on the longevity of the X-Axis joints. But, given that that is no longer an option, I'm going to be keeping a close eye on these, to ensure that if they fail, I'm able to catch it early and (hopefully) get them warrantied out. 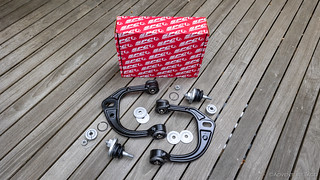 The new SPC UCAs arrived, and they were pretty. 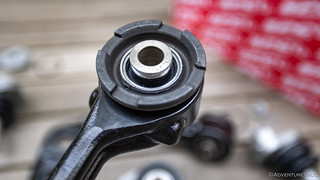 A close up of one side (outside) of the X-Axis joint. 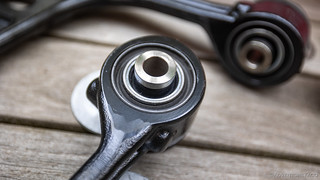 A close up of the other side (inside) of the X-Axis joint.

With the new arms in hand and a desire to recoup some of the cost after I sent my original UCAs back, I knew my usual modus operandi of waiting 6-9 months to install anything wasn't going to work. And, with nice weather, I got to work swapping out the parts.

I should note that I show several of the steps below, but that if you really want to do this yourself, it would be better to use the Step-by-Step Install of SPC Upper Control Arms on a Toyota Tacoma guide. 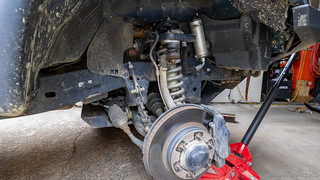 First, the wheel and tire have to come off.

Initially, I'd thought that I would first remove the coilover just to make things easier, but looking through the instructions that came with the new arms, and carefully inspecting the situation by eye, it looked like I could do the entire job without pulling the shock. So, rather than go to all that trouble, I got started by removing a few bits from the engine compartment so I could access - and remove - the long UCA bolts. 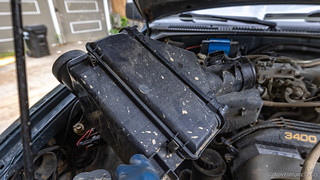 Out comes the air box on the passenger side. 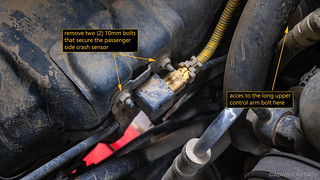 It's also necessary to remove these two 10mm nuts to get the ABS sensor out of the way so the bolt can pass through the space it occupies. 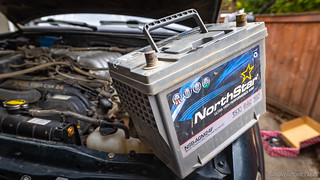 On the driver side, the battery has to come out. 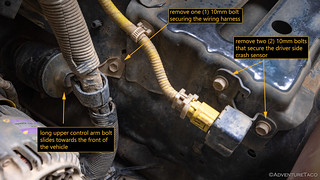 So does the driver side ABS sensor and a 10mm bolt that holds the wiring harness.

With the engine compartment cleared out, it was time to disconnect the control arms themselves by removing the long bolt securing them to the frame, and then separating the ball joint from the spindle. Both of these operations went much more smoothly than when I'd replaced my original UCAs, because the SPC parts are manufactured to be serviced without the use of presses and pullers. It was great! 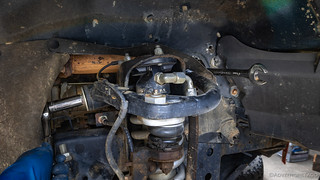 A couple of 19mm tools to loosen the long UCA bolt. 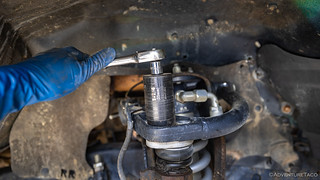 A big, 32mm socket is used to loosen the adjustment nut on the top of the SPC ball joint. 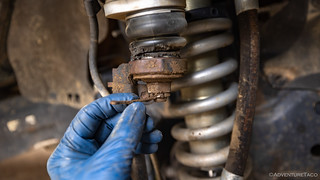 Removal of the cotter pin, and then a 22mm socket easily removes the castle nut from the upper ball joint, which can then be tapped out of the spindle. 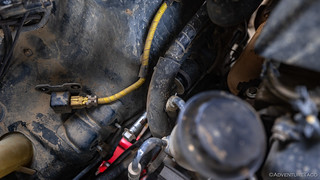 Finally, the long bolts can be pulled out, releasing the UCA.

With the old parts out, I definitely noticed a bit of wear in the original polyurethane UCA bushings - several of the metal sleeves slipped right out! They had lasted 120K miles though, which seems like a reasonable lifespan - in line with components like the timing belt and water pump. At any rate, before installation of the new arms, I figured it was time for a little comparison. 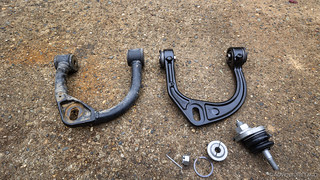 Old 25460 arm on the left; new on the right. Note the difference in construction, where the old arm was tubular and welded at the upper ball joint; the new arm is completely forged. 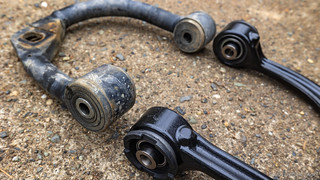 Installation of the new UCAs was essentially the reverse of removal, and a simple matter in all regards except for getting the long UCA bolt seated - that is an operation that requires the help of a friendly companion. Luckily, @mrs.turbodb was around for a few minutes of assistance. 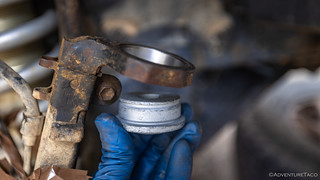 First, slide the new retainer into the spindle. Note: if you are simply moving from older-to-newer SPC UCAs, you don't need to replace this part, but I did anyway. 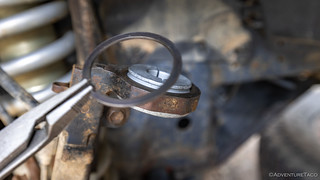 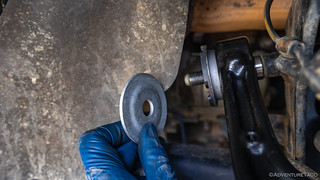 Ensure that as you get the long UCA bolt threaded entirely through the UCA - with the help of a companion - the offset washers hold the outside of the washer away from the new X-Axis joint. Torque to 85 ft-lbs. 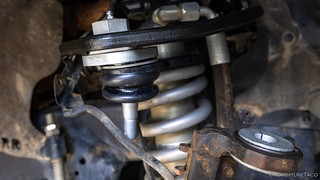 Secure the upper ball joint loosely into the UCA with the 32mm nut, using the supplied instructions to adjust the ball joint to the desired caster setting. 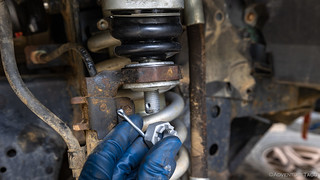 Insert the post of the upper ball joint into the spindle and secure it with the castle nut and cotter pin. Torque to 45 ft-lbs.

At this point, I only had a couple things to do before reassembling the engine compartment, putting the tire back on, and standing back to admire my work. Specifically, I needed to grease the upper ball joint with SPC-approved grease, and I needed to adjust the ball joint so that it was centered in the slot on the UCA before torquing the 32mm nut to 150 ft-lbs. Easy peasy.

In all, the entire process took about 2 hours - mostly because I spent a bunch of time photographing everything, and wondering if I was going to have to remove my coilover at the beginning.

With the whole thing done, and the original arms on their way back to SPC, I took the Tacoma in for an alignment and was somewhat disappointed with how things turned out. I'd hoped for a good 1.5° of caster on both sides, but given my caster adjustment on the SPC ball joints, I got significantly less than that on the driver side. The solution is obvious of course - I'll change the position of the ball joints to add more caster - but that will have to wait for my next alignment.

Not a great alignment, but a lot better than when I took it in.

For now, it's time to get back on the trail with my never-to-be-serviced-again control arms!

Published in Tacoma Maintenance; experienced on 2022-09-01