Belly protection on, it was time for some dirt roads. Back from India a Friday morning at 6:30am (again), we packed up the truck and headed to Crater Lake National Park in central Oregon. The idea was to get in some great sites, but also spend a day or so exploring the back roads, finding camp sites, and putting the truck through some paces.

The drive down was long but easy. Waze and a podcast running on the JOYING, and a mid-day stop for Jimmy John's, we arrived at Crater Lake at 5pm, an experience not unlike Owyhee Canyon - where you see almost nothing until you drive up to the edge of the lake, and BAM!

Of course, the truck had to get in on the action early, so we backed up to a viewpoint and snapped a pic.

With couple hours to dark, we decided we had to check out a short hike to Watchman Lookout, since we wouldn't be back this way for the rest of the trip. It was totally worth it, as this late in the day, we were the only ones at the top, so we got the view all to ourselves.

It also meant that the signs to stay off the lookout were deemed optional. By one of us. 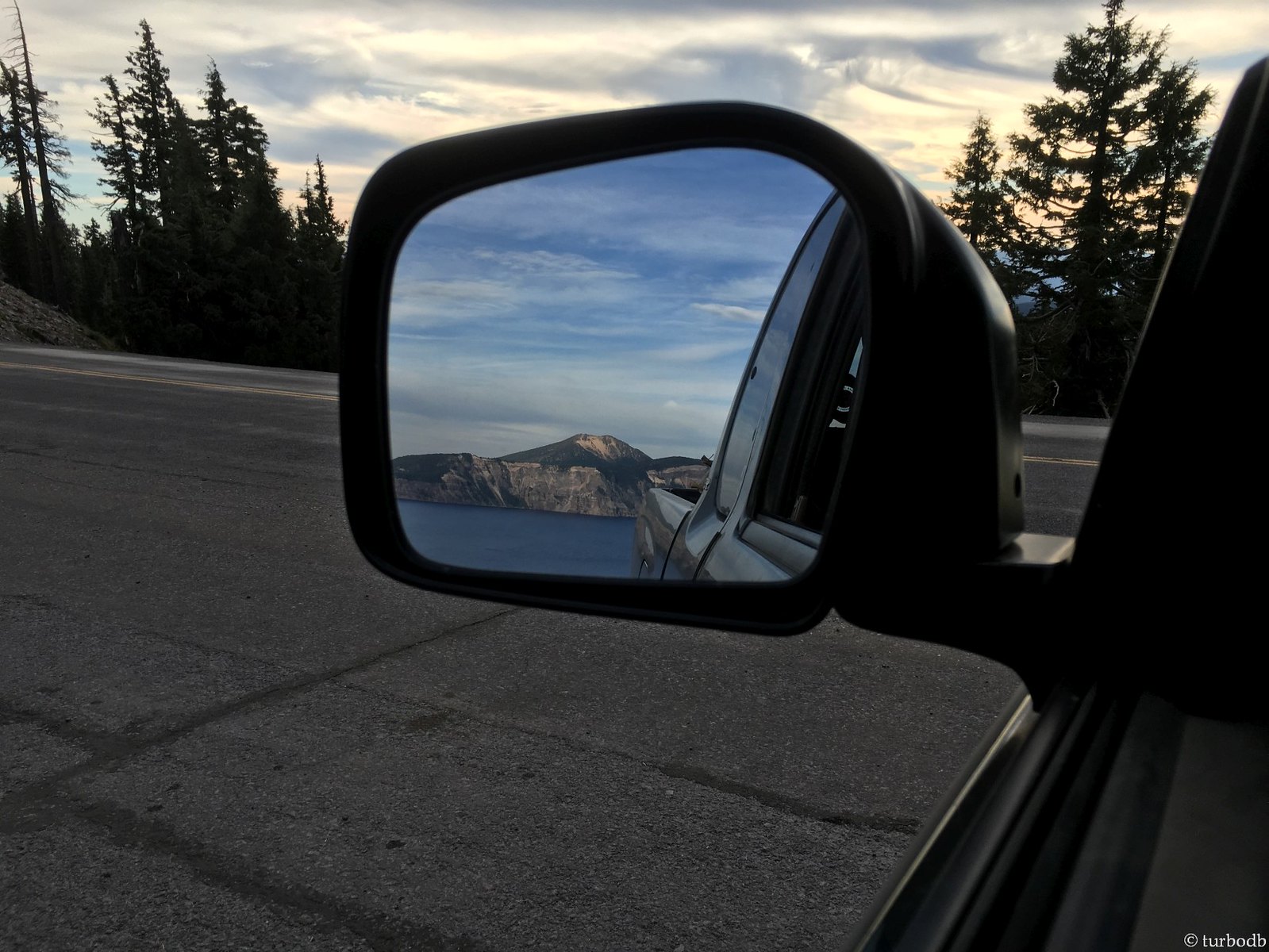 Up and back in just under an hour, we headed off again to find our camp spot. We'd scoped out a few roads west of the park, so we headed that direction and onto dirt as soon as we could. Exploring around for two hours, breaking trail as we went, we finally came to the end of a road that opened up on a flat clearing that was the perfect spot for us to spend the night. 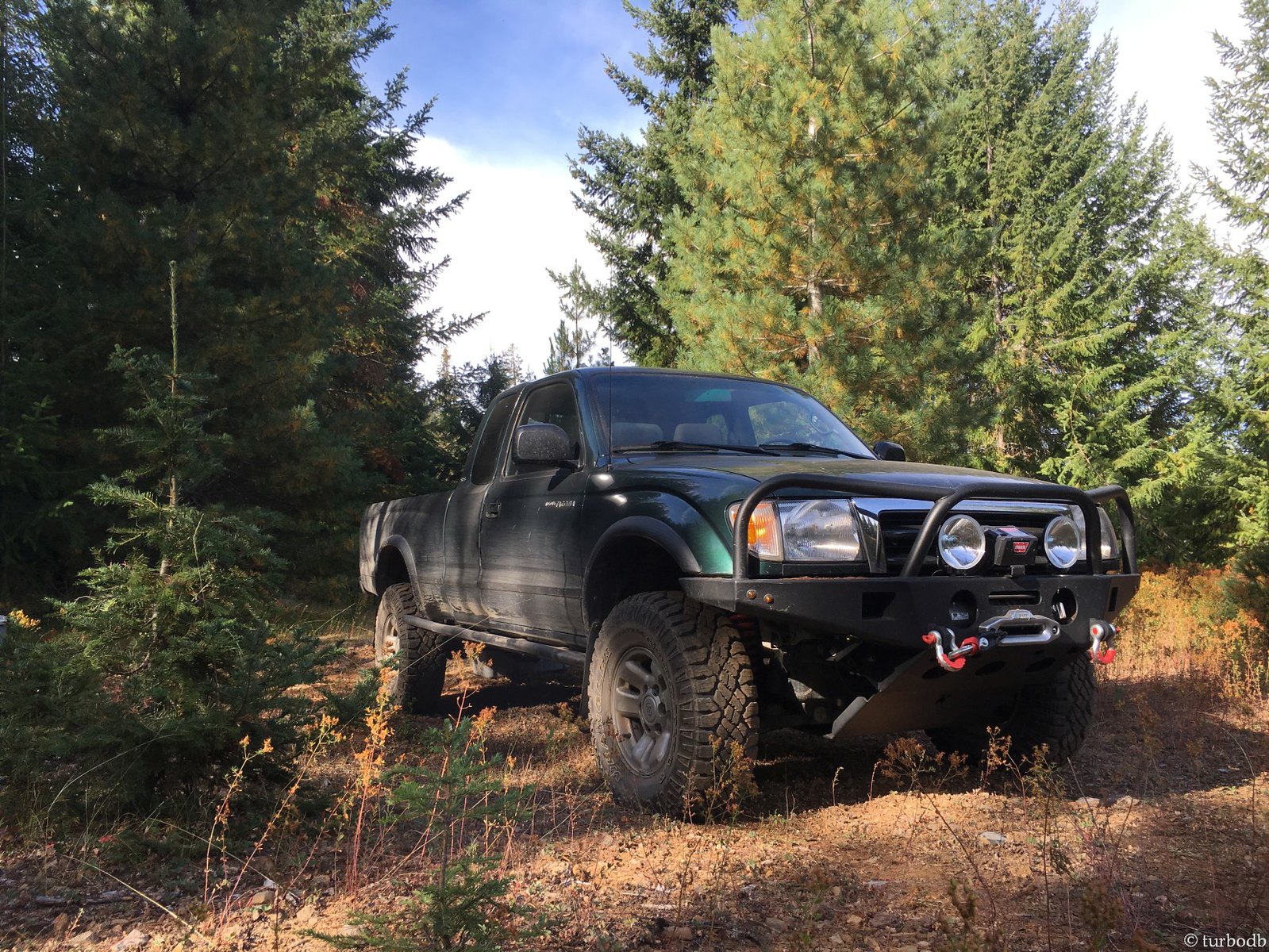 Out came the sleeping bags, air mattress, and pillows and comforter, and we setup in the back of the truck, tentless. Both tired, and not super hungry, we had some cereal for dinner and hit the sack.

Morning brought partly cloudy skies, more cereal, one of the best cantaloupes ever, and an awesome fire (to burn our trash). While we waited for the fire to die down (which is harder when someone keeps stoking it), we enjoyed the warmth, breeze, and our kindles. 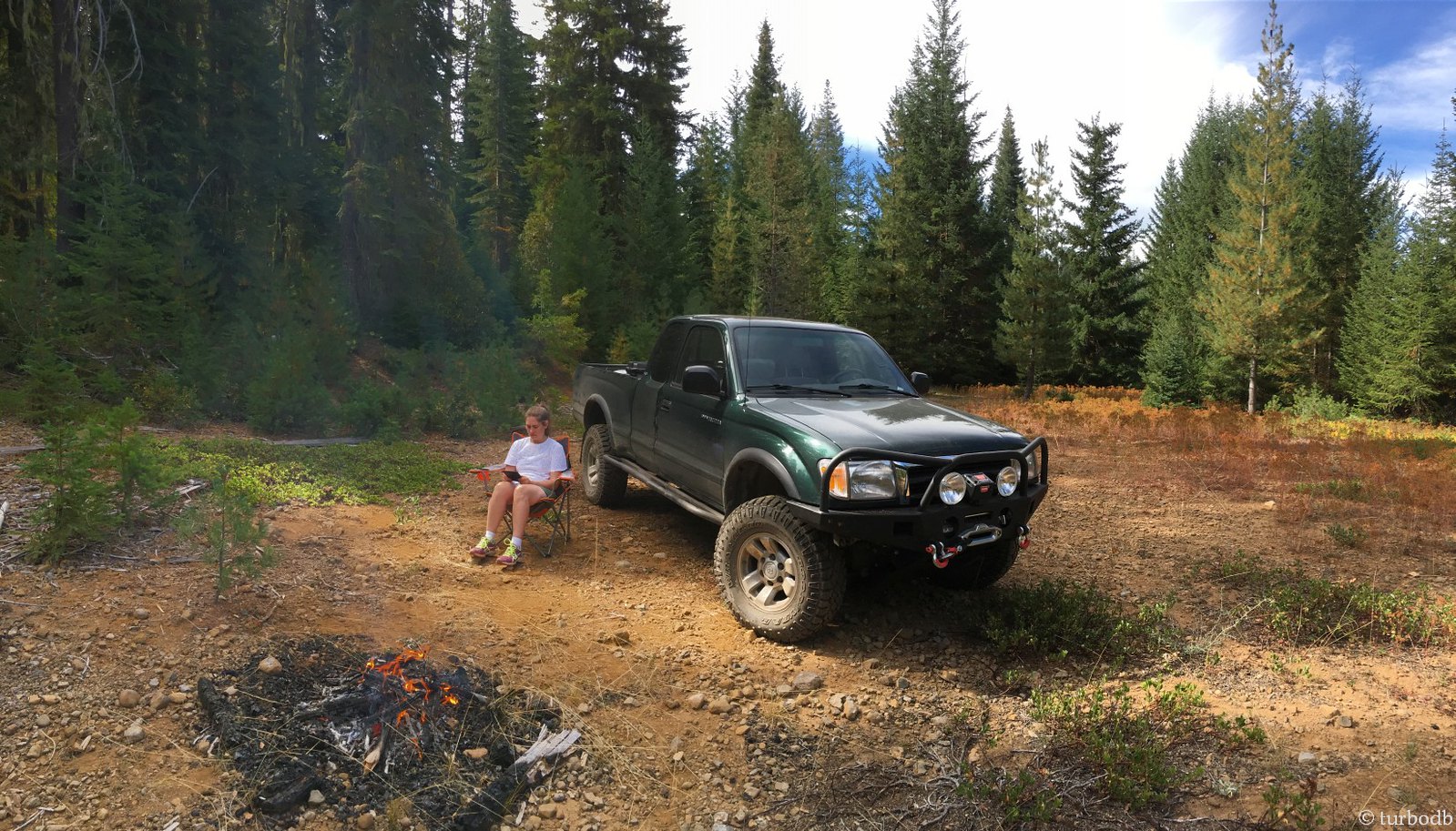 Around 10:30 we made our way out of camp and back down the logging/Forrest Service roads, which were a bit easier to traverse with some of the obstacles cleared from the previous evening. 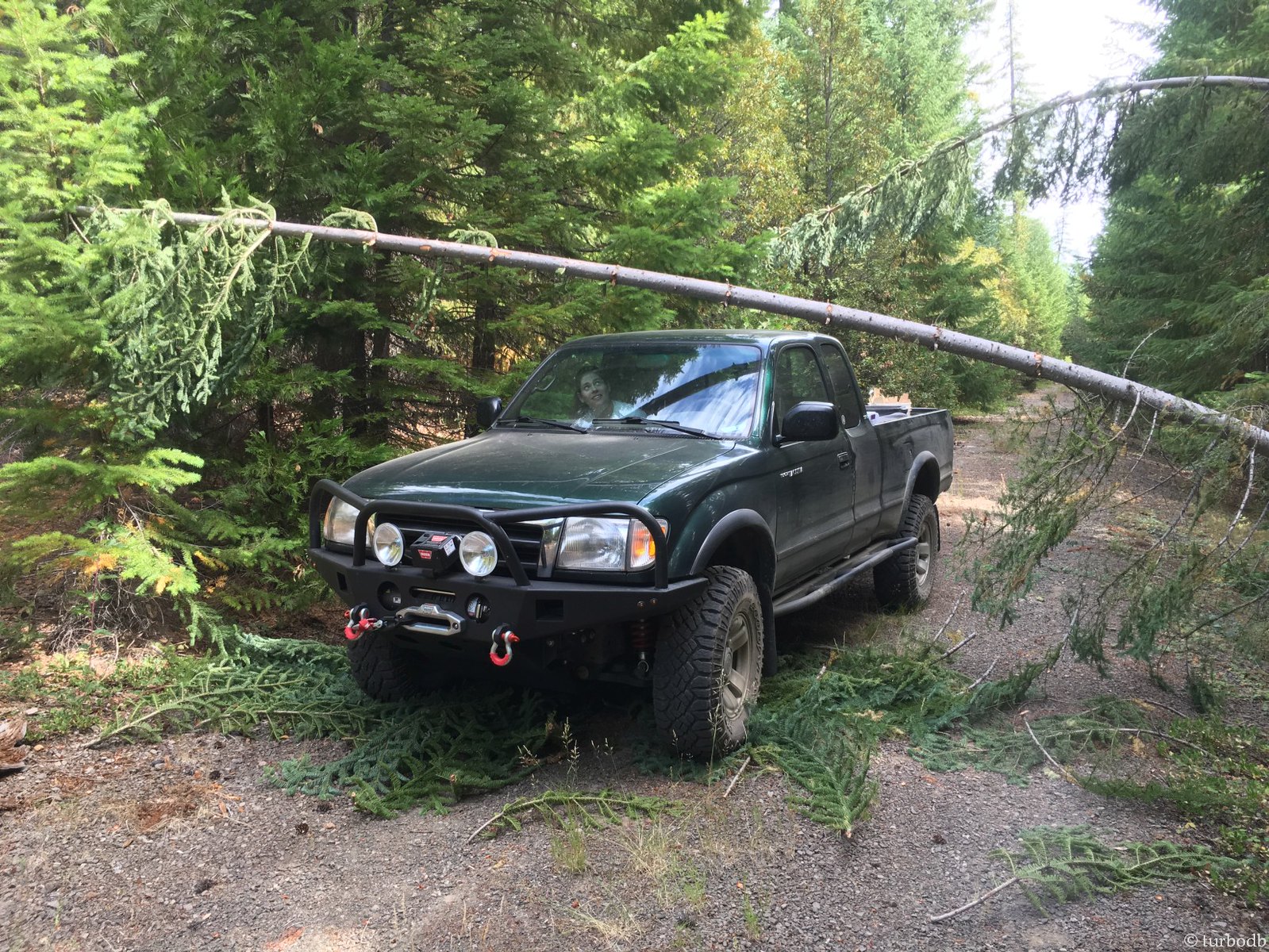 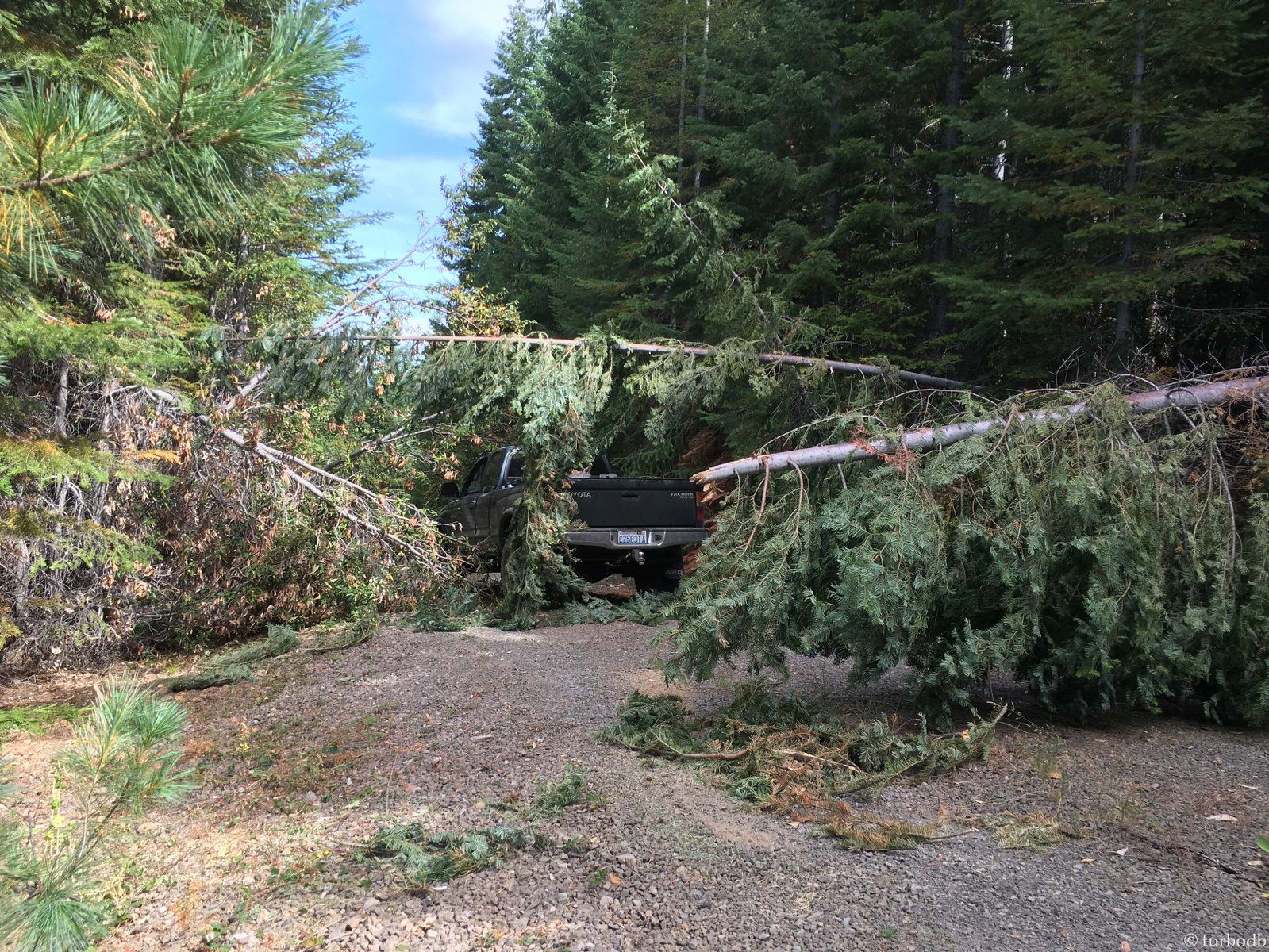 We'd planned the day to be one of exploring the back roads, since it was supposed to be the cloudiest day of the weekend, so we spent the rest of the morning looking for the perfect place to camp that night. Luckily, we'd packed up camp and taken our stuff with us, because several Forrest Service roads later, we found a beauty of a spot.

Private, westerly facing, and with a view! We were sure we'd be back, so we marked it on the map. 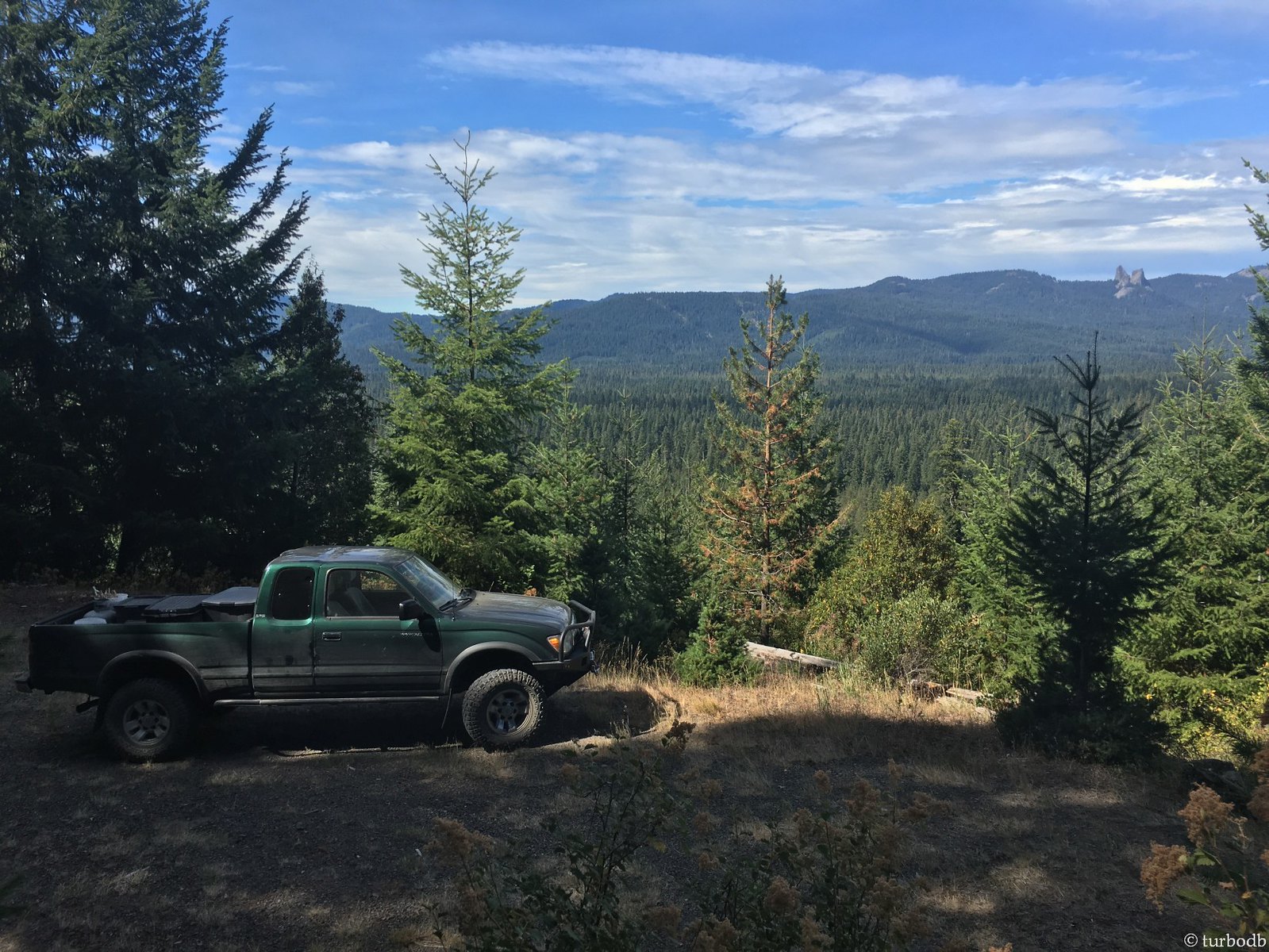 Done exploring to the west of the park, we headed East. The day was turning out to be beautiful - the cloud cover mostly burned off, and the sun was out - so we headed back up to the lake to get a picture or two of the amazingly blue water that is the cleanest large body of water in the world. We were not disappointed. 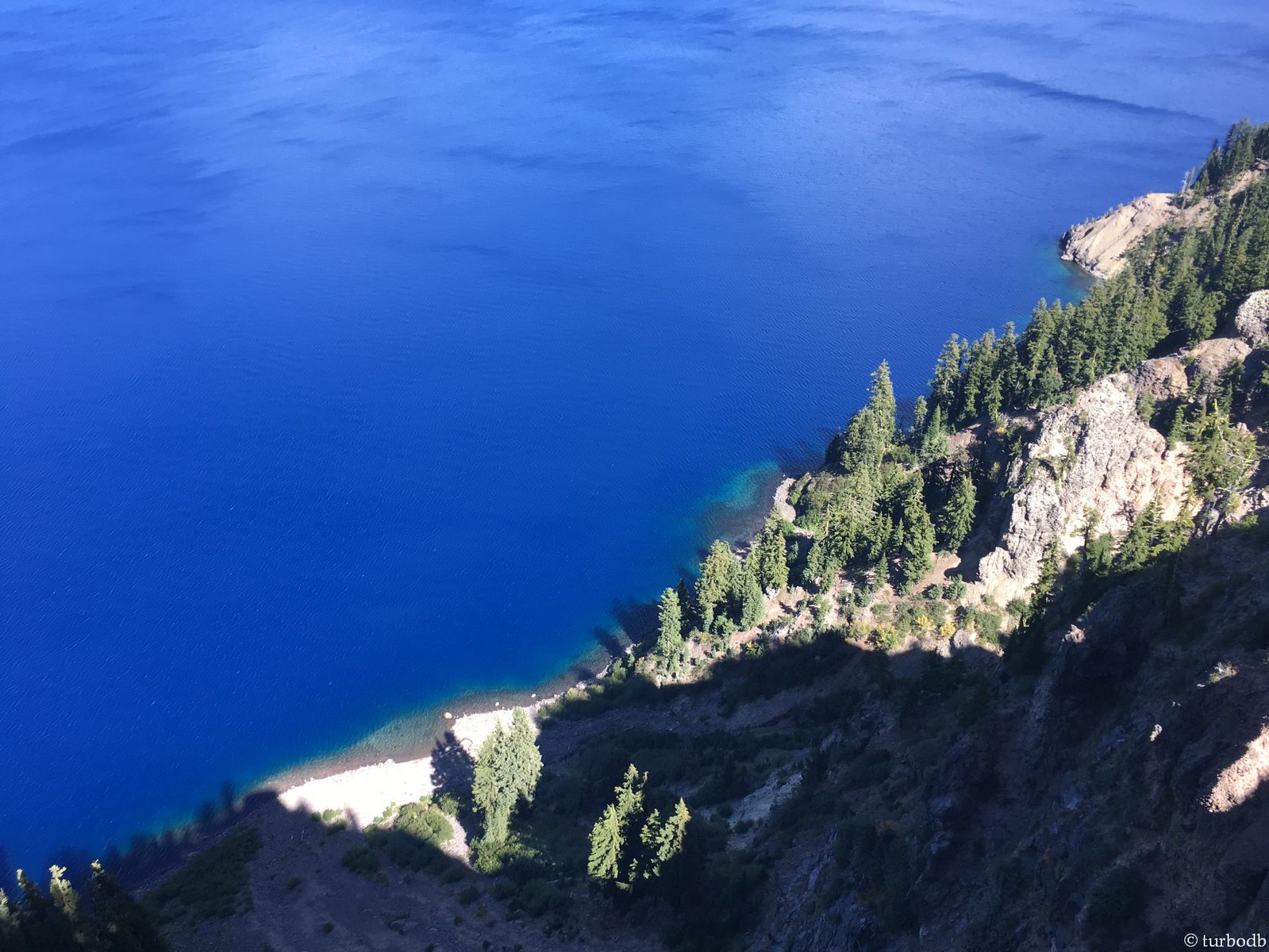 One thing we didn't plan on was the fact that the east rim drive (basically, the entire eastern side of the lake) was going to be closed to car traffic on Saturday (it was bike-around-National-Parks day). But, that worked out just fine for us, since we'd previously decided to do more off-roading along the east side of the park; exploring the plethora of trails, with a goal to reach the Pinnacles overlook (which it turns out, used to be the east entrance to the park).

Getting to the Pinnacles was pretty easy (and beautiful), and the old east entrance was...just too tempting. 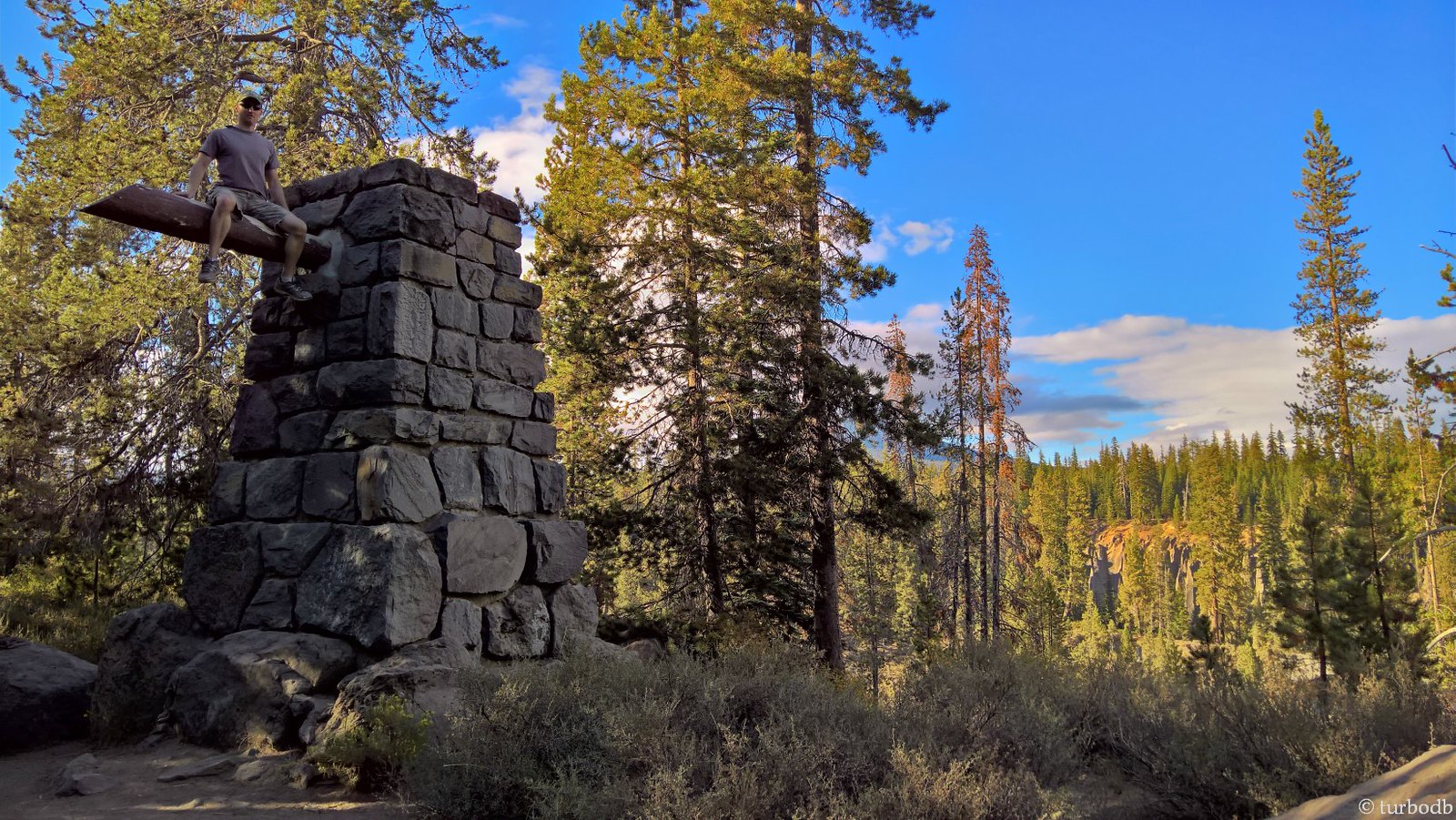 Another short hike took us to a splendid overlook, and a parking lot on the Crater Lake side of the trail that was empty - in the middle of the afternoon - for perhaps only this one day of the year. Wow, did we time that perfectly or what?

From there, it was back into the truck and off to find a great spot for the night. We'd passed a few possibilities on the way to Pinnacles, and we liked the idea of staying on the east side, just to save driving back and forth before our early morning hike planned for Sunday, and the drive back to Seattle. This spot was promising, but buggy. 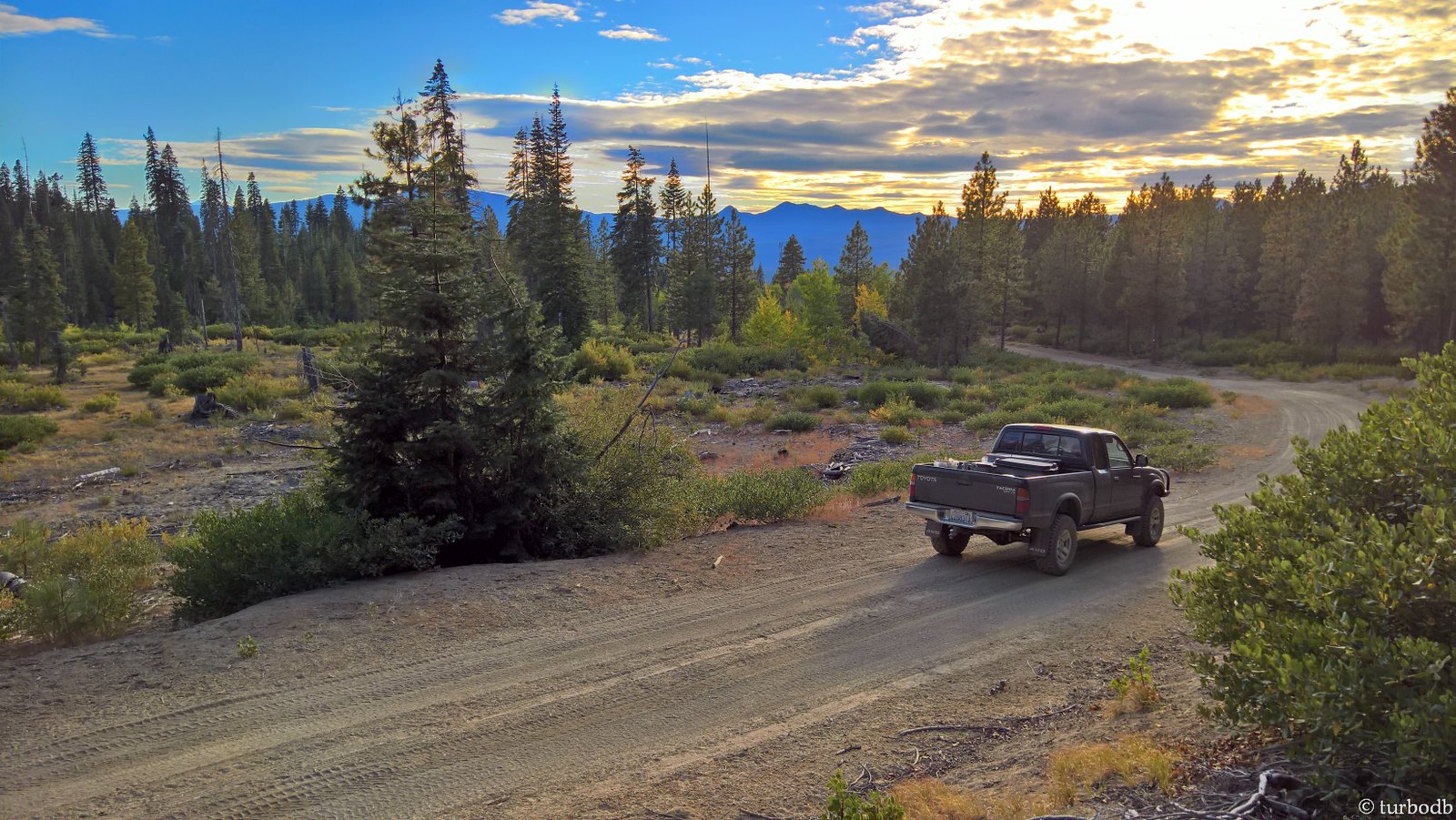 After a bit more exploring, we ended up here - a spot that wasn't too dusty, was relatively near to the park, and where we had open skies (which meant no tent!) and a pre-existing fire ring (which of course, we were going to use)! 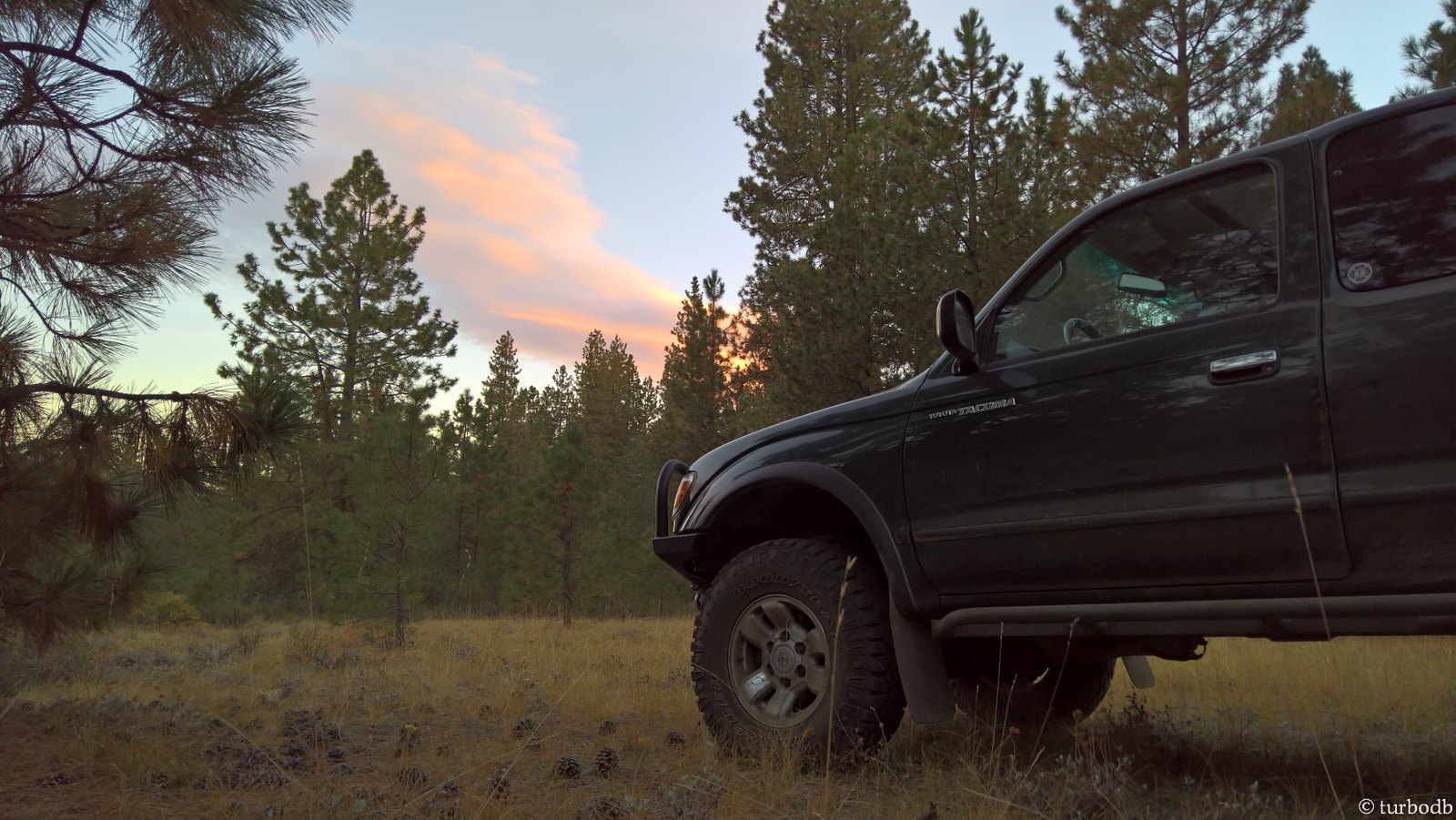 Dinner of skirt steak and roasted corn on the grill. A fire with dry pine needles and dead wood found around, and we found ourselves once again tired and ready for bed.

Which was under the stars (and a full moon) again.

As we were getting into the sleeping bag, a shooting star. Then, sleep. At least, for one of us. For the other, falling pinecones and some rustling in the forest made for a fitful sleep pattern.

The alarm went off at 5:00 - we were planning for an early start in order to get a hike in before heading back to Seattle. That turned out to be a good thing - because a light drizzle was just starting. We got packed quickly, slurped down our cereal, and headed out - hoping the rain would hold off - after all, today was supposed to be the nicest day of the weekend.

Turns out, the drizzle was just heavy fog. Whew.

We arrived at the Mt. Scott trailhead along the East Rim Road and set out on our hike to the highest point in the park by 6:45 am. As we gained elevation, the dew of the night before was pronounced in some areas and completely missing in others (because it was windy!) Sunrise and a quick dissipation/burn off of the fog made for a view of the lake that was once again amazing. And once again our timing was impeccable - we had the top pretty much to ourselves!

On the way back down, we passed a few early morning hikers - all surprised to see us coming down the mountain.

By 9:30, we were on our way back to Seattle - another successful trip in the bag. 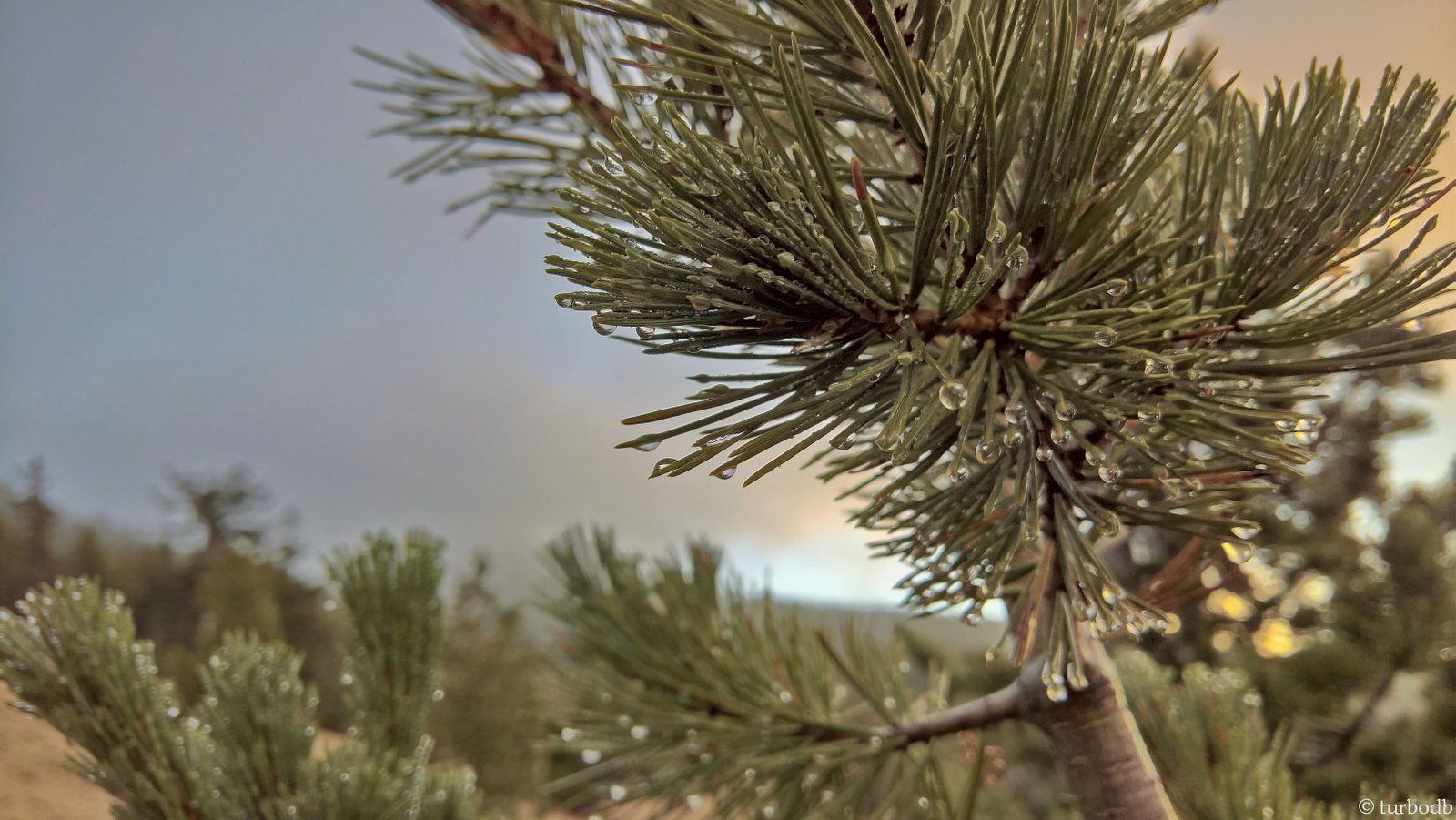 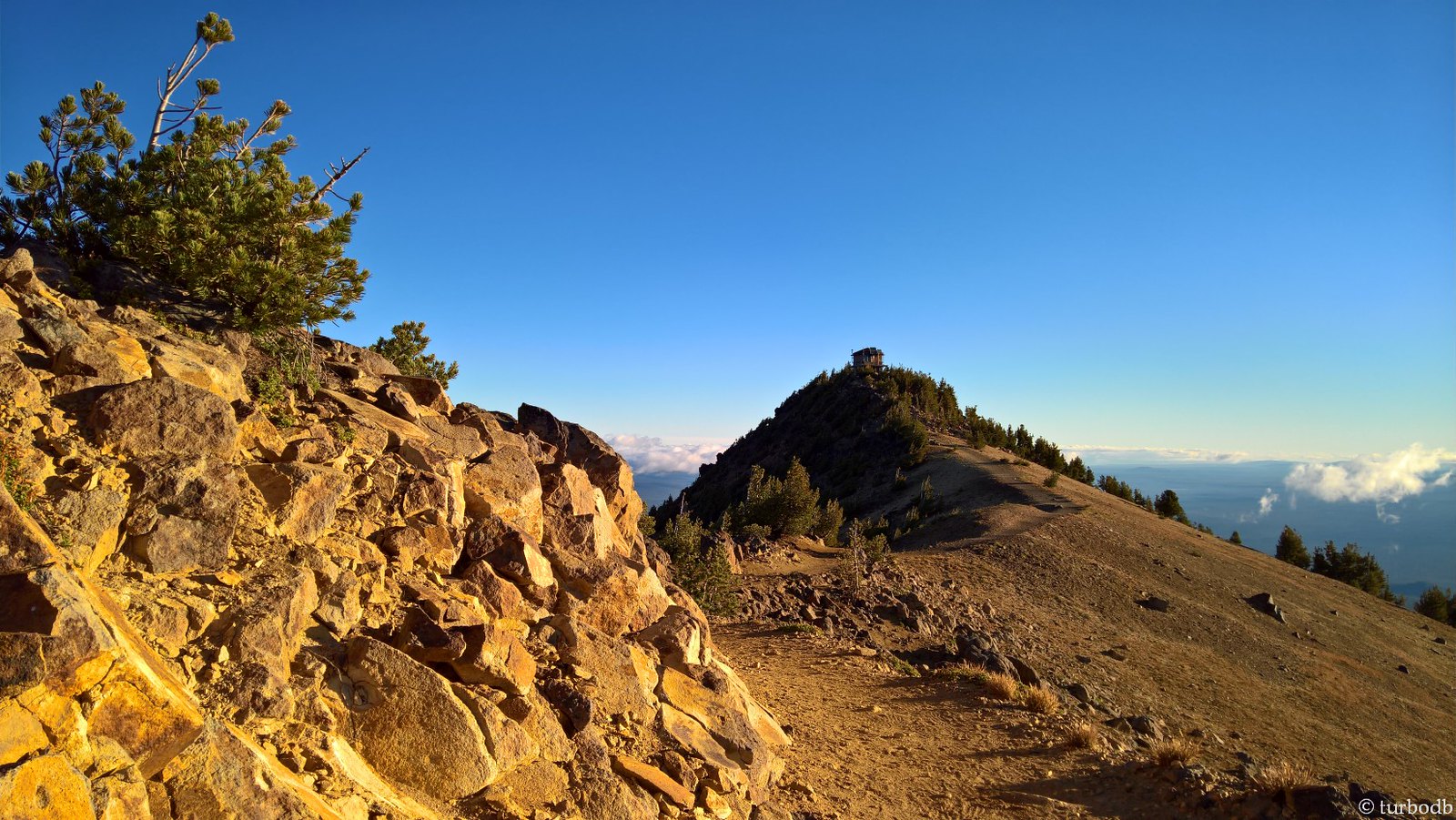