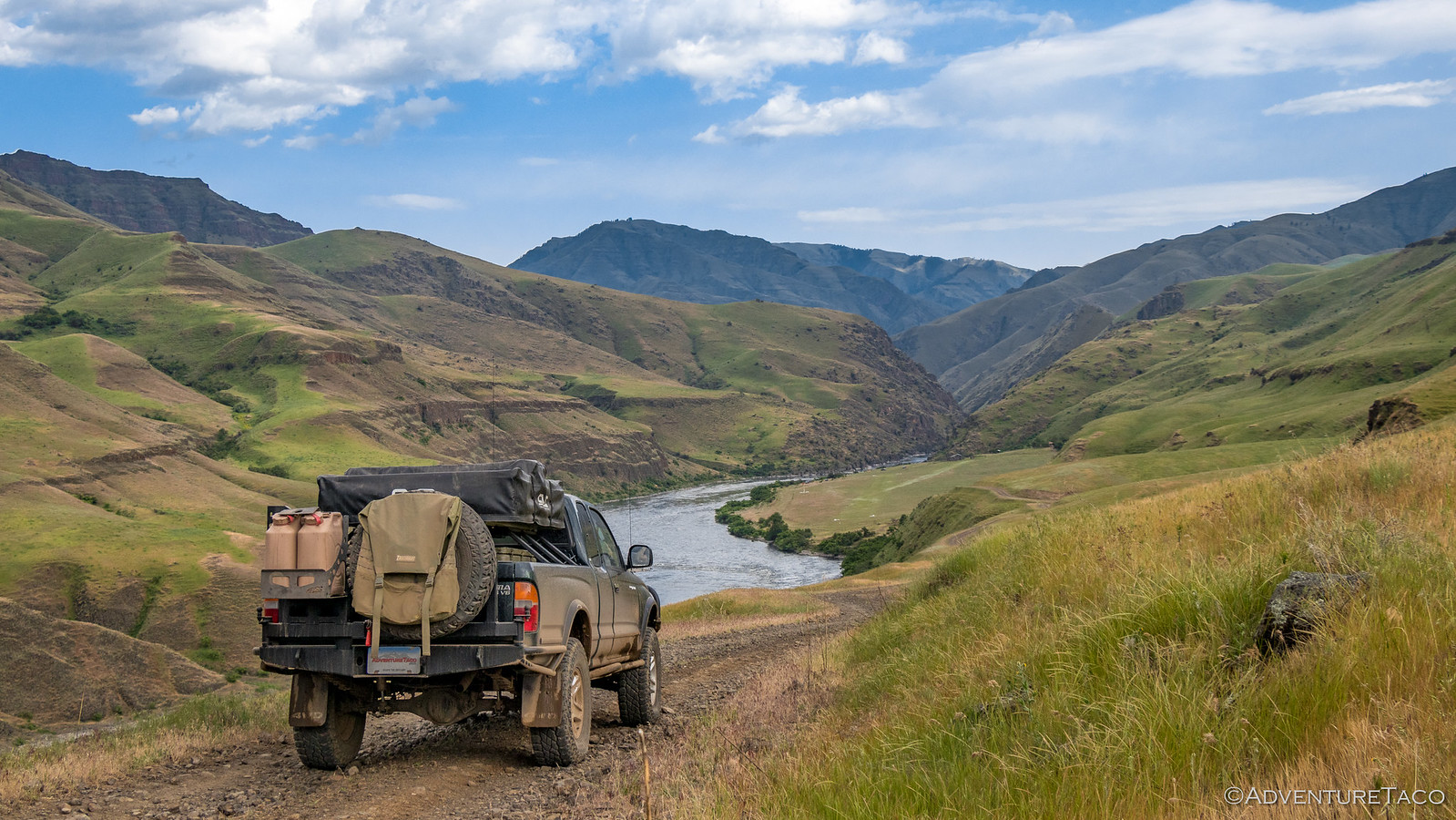 Had we blinked as we passed through Imnaha, we might have missed it as we set out down Lower Imnaha Road. The first six miles of this road are paved, but we'd been warned by 100 Hikes / Travel Guide: Eastern Oregon that beyond that point we were in for a whole different experience...

At this point the Lower Imnaha Road suddenly becomes a rutted, steep one-lane dirt road strewn with rocks. Turn back if you don’t like the first 100 yards, because this typifies the 25.4 miles ahead. Vehicles must be driven so slowly on this rugged track that the first 14 miles to the Cow Creek Bridge over the Imnaha River will take you a full hour. Beyond this bridge, the 11.4 miles to Dug Bar are slightly worse, requiring another full hour to drive.100 Hikes / Travel Guide: Eastern Oregon

Looking forward to finally airing down - we'd made it at a full 42psi so far - we pulled over on the first switchback to admire the view up the Imnaha Valley as the tire deflators - which I highly recommend for anyone who airs down regularly - did their job, taking the truck down to 18psi in no time. 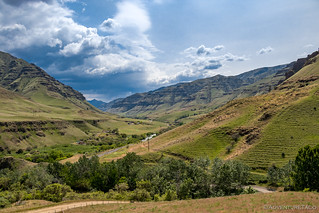 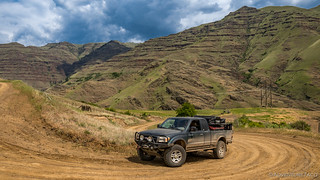 And then, we were off - the ride now more comfortable as we floated along on our little cushion-y tubes of air. 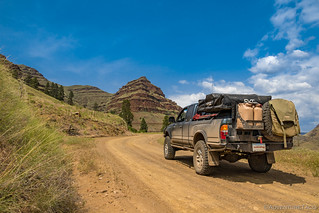 As we ticked away the miles, there were two things going through our minds: first - how beautiful it was down here at bottom of the canyon. A bit further north, the sun was now out again, the temperatures were in the 80°F's, and the many-greens-of-spring were all around us. Second - where was this horrible road that we'd been warned - and become so excited - about?! 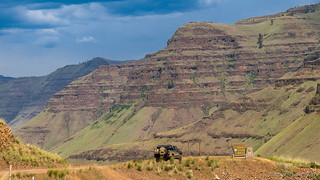 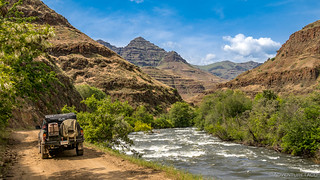 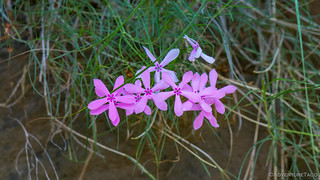 Really though, we didn't mind the calm trail, and given our fuel situation - no stations around us for many miles and our tank already down to ¼ full - it was probably better that we weren't crawling along in 4Lo. Instead - as the trail followed the bottom of the canyon - we spent our time enjoying the amazing geology of the Imnaha - towering columns of Grande Ronde basalt, alternating with chaotic Imnaha flows. To say that @mrs.turbodb was in her element would be an understatement. 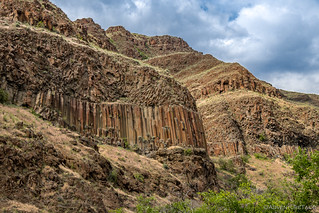 Before long - and in well under the hour we'd been led to believe it would take, we arrived at the poorly named Cow Creek Bridge, spanning the Imnaha River. There, we were surprised to see a reasonably permanent shelter setup next to the river, along with a crazy-floating-barge contraption churning away in the main flow of water. 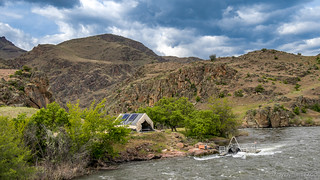 Neither of us sure what it was, I used my I'm-a-guy-so-I-make-things-up super power to authoritatively state that it was a power generator for what must be a mining operation - the tent obviously a gold room where the miners would clean up their concentrate. @mrs.turbodb wondered out loud if it had to do with fishing. This is worth remembering, for later in the story. 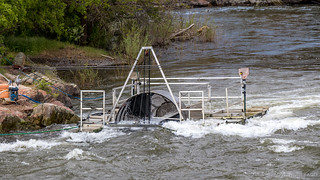 We also took the time to check out what was clearly the first version of the bridge - now just a couple of rock pilings on either side of the river - before continuing on our way north to Dug Bar, where we hoped to find a nice spot to camp for the night. 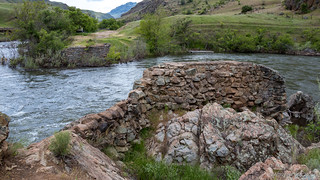 A few miles down the road, we crossed another bridge - this one unnamed - over Cow Creek (what?!), and I think it was at this point that I may have mentioned our fuel situation to @mrs.turbodb. It's not that we were in any trouble - after-all, we had 10 gallons of spare fuel in the jerry cans - but it did mean we were likely to have to transfer some of that to the tank once we reached camp, and it meant that we'd need to find fuel the next day in order to continue our adventure.

Perhaps halfway between the "mining operation" and Dug Bar - which is, notably, the only place where vehicles can drive to the Oregon shore of the Snake, we turned off the main road and onto a short power-line road spur that I hoped would take us to an overlook of the confluence of the Snake and Imnaha Rivers. 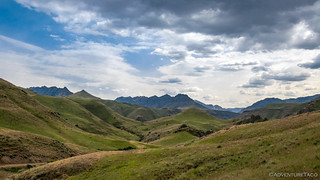 Weeving it's way along ridgelines, and ending at a pad @mrs.turbodb felt was "just large enough to turn around, but not with her in the truck," this was a fun mile or so of driving for me, and the views at the end were amazing, even if the confluence was - if we're being honest - not really all that visible. 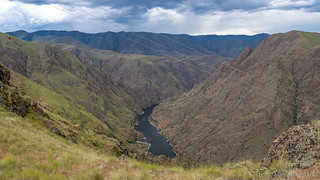 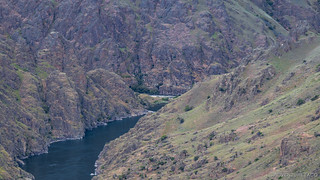 It was now right around 4:00pm - mid-afternoon - and as I got the truck turned around and headed back down from the overlook, we set our sights on Dug Bar - now just a few miles away. 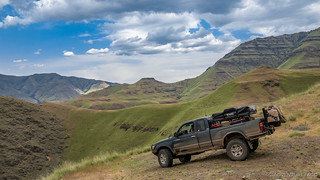 The story goes that when the U.S. Army forced Chief Joseph to leave Oregon in 1877, he led his Nez Perce band through Hells Canyon on a difficult trail that crossed the raging Snake River at Dug Bar. My understanding is that additional research now leads historians to believe that they crossed several miles downstream at the mouth of Big Canyon (Hells Canyon: the Deepest Gorge on Earth).

Today, as we rolled onto the bar, we were greeted by the sight of a grass airstrip and a herd of wild horses - a strange sight, here in the middle of nowhere! 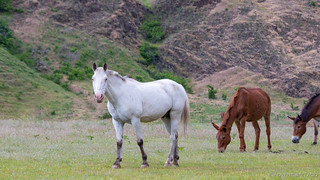 Keen to be out of the truck and do a bit of exploring, found ourselves an unassuming, low-profile, parking spot in the single-site, primitive campground on the edge of the Snake River. As one does. 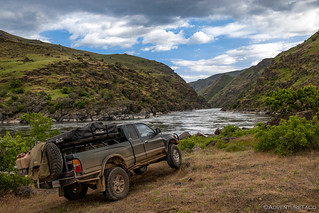 Hopping out our of the truck, we were greeted by literal swarms of gnats. I mean, there were thousands of the little buggers. Hundreds of thousands probably. The wet ground of spring, combined with the warm air of the valley floor must have been the perfect combination for these little terrors. Every step we took kicked up hundreds more, every bush we brushed through, thousands.

And then, as if that wasn't enough to convince us that this might not be the right place to start cooking dinner, it started to rain. It was clearly just an afternoon shower - again a combination of the moisture in the air and the warm temperatures, but it really started coming down, and we high-tailed it back to the truck to take shelter, read our Kindle Paperwhite's, and perhaps doze off for a couple minutes. Allegedly.

At any rate - just as I was allegedly resting my eyes - we soon started the conversation about where we wanted to set up camp, and we ultimately decided that a little camp spot that @mrs.turbodb had found back up the Imnaha river by the "mining site" would likely be a better spot than this one. Not only was it more sheltered should there be wind and rain overnight, but it had far fewer bugs and arguably a nicer spot on the river to boot. Plus, if it did rain overnight, we weren't sure what the condition of the road would be in the morning.

So - it turned out - we weren't quite done for the day. I started up the truck and as the fuel light came on, we started our 32 mile drive back towards Imnaha. We only got about 300 yards before we ran into our first issue. 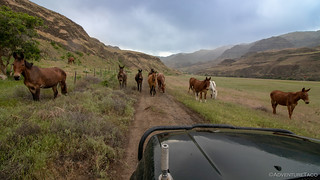 These horses stood in the road for a good 5 minutes - me honking and slowly moving forward, then backing up and accelerating towards them. It was only after several attempts and a bit of concern on our part that we'd actually hit one that we finally squeezed through - so close that I was worried an errant kick might leave a side panel on the truck a bit worse for wear.

Luckily not. I think they were just trying to scare us out of the Tacoma, so they could take it for a joy ride.

From there, we made good time back to our camp site where we got setup just before 7:00pm - a long but fun day, exploring much of what the Oregon side of Hells Canyon had to offer. 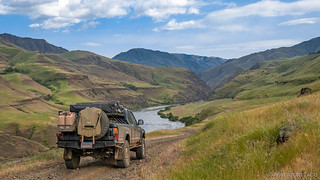 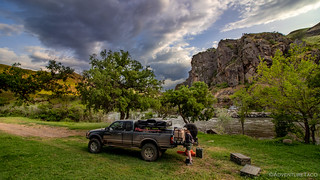 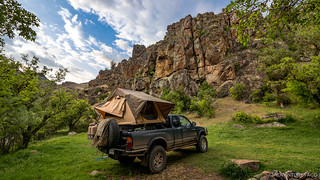 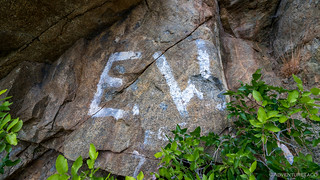 Our driving done, I explored around camp a bit until the burgers were made; then we plonked down at the side of the river to enjoy them with a few potato chips. Gotta love camping. 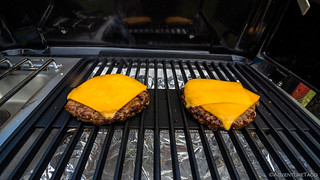 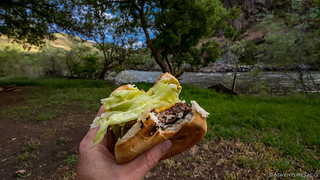 After dinner, we decided it'd be a reasonable idea to cross the river to check out the "gold mine" and its generator. I mean, we were curious - and whoever had been there earlier in the day was now gone - so what better time to do a little snooping?

As we got closer, I became less-and-less convinced that my proclamation of "gold mine" and "generator" was correct. I didn't see any wires running from the contraption in the river to the tent - and I was pretty sure that these guys weren't leaders in wireless power.

Inside the tent, it was pretty clear that my second thought (it was mine, right?

) - that this had to do with fishing - was probably more accurate - buckets, sorting trays, and fish counts scattered around the tables. 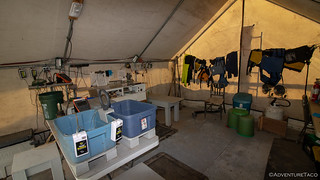 Oh well, you win some and you lose some.

As the sun began to set along the horizon - it was long gone from our view at the bottom of the canyon - we headed back to our camp. It'd been a long day and I for one was tired and ready to rest my eyes after another couple pages on my Kindle. Plus, the comfort of the Exped Megamat 10 Duo make me want to go to bed even earlier these days - I must really be getting old. 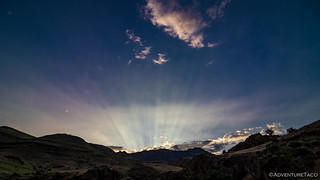 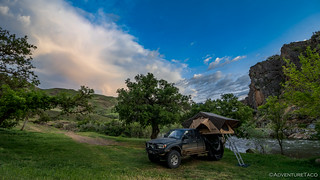 And so it was that even as there was still a bit of light in the sky - probably 9:00pm or so in my defense - that we climbed into bed. It'd only been two days, but we'd already completed everything I'd planned for the trip.

Luckily, @mrs.turbodb had found a couple things that would turn out to be awesome, and we'd get started on the first one without even leaving camp the next morning... 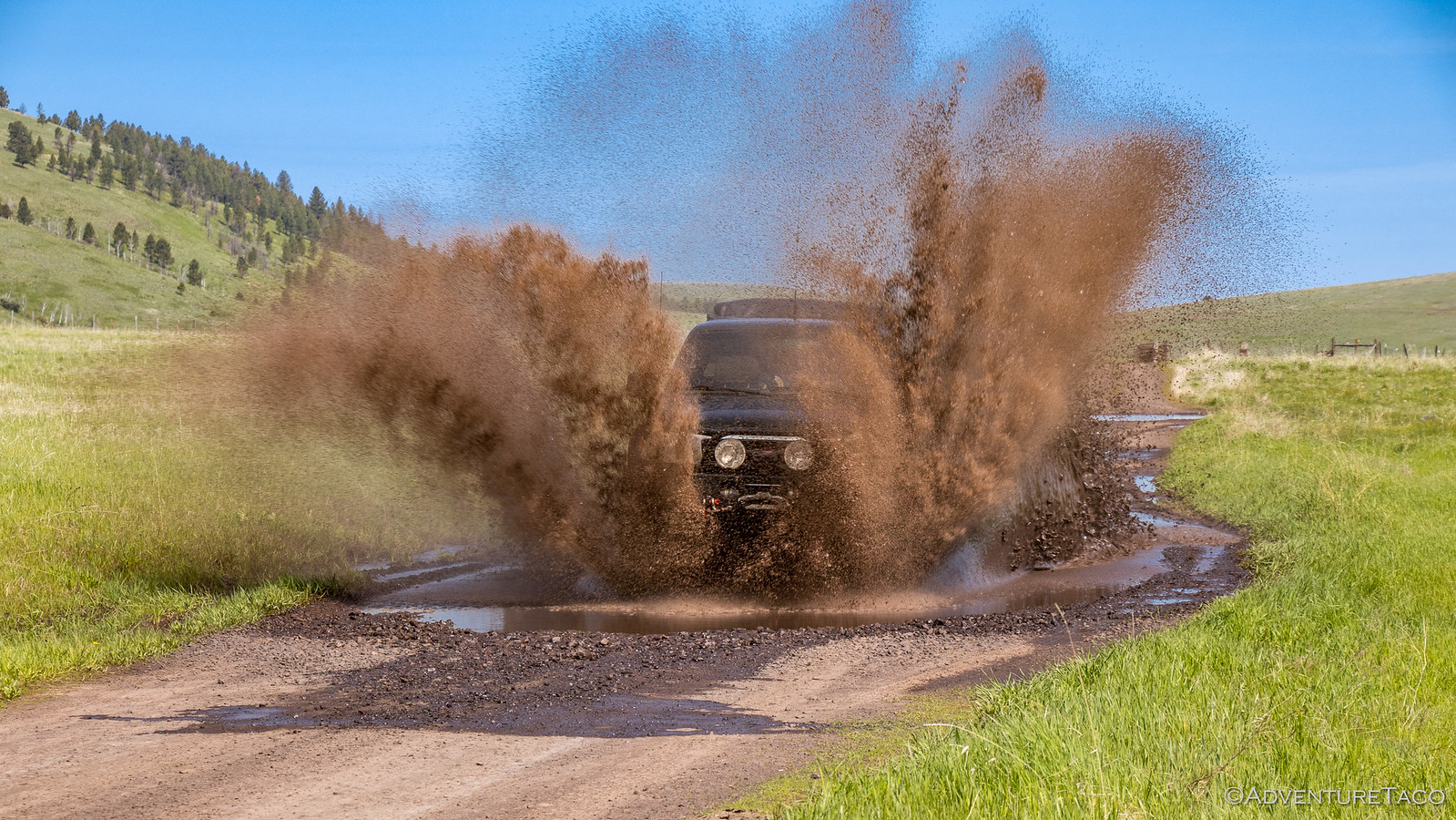 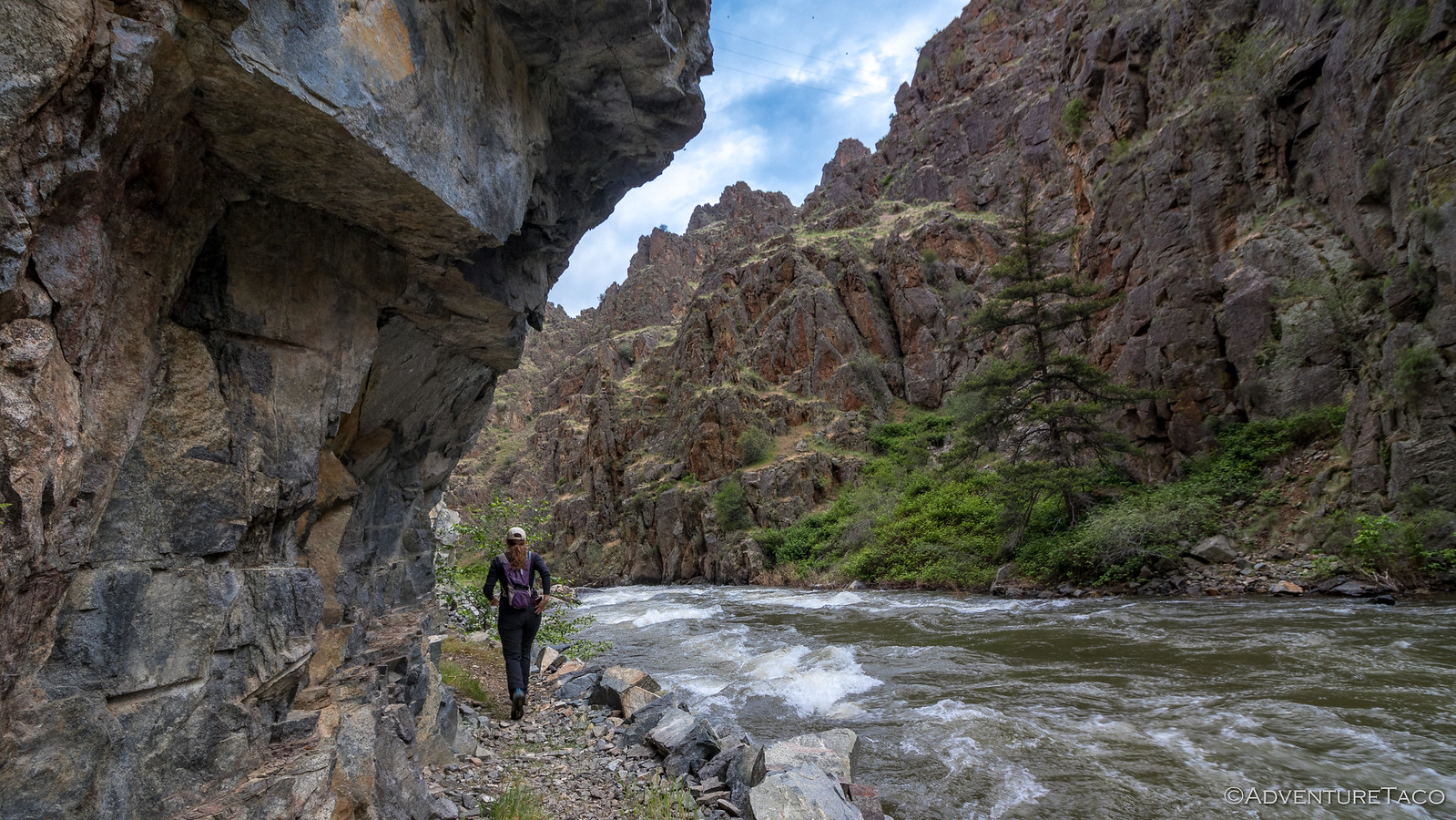