Let's see, how did this start last time. Ahh, right...

For two years now, my A/C hasn't really worked. At some point - 17 years after it was originally installed - it developed a slow leak. As spring turned to summer in 2018, I noticed that - as Nelly might say - "it's getting hot in herre," even as I cranked up the cold.from It's Too Damn Hot In Here - Fixing the A/C Evap Core

Well, I replaced the A/C evap core and things worked well for all of one week. While that sounds bad - and I guess ultimately it is - we counted our blessings that the end of the week was the same day we finished running the Nevada Backcountry Discovery Route (NVBDR) for the first time. With days over 100°F, we'd have suffered immensely had the A/C not held out as long as it did!

At any rate, with all the components in the cab of the truck replaced, I turned my sights on the next culprit - the A/C Compressor. Why the compressor? Well, when I'd charged the A/C system, the low pressure on the manifold acheived the correct pressures - around 32psi - according to the Factory Service Manual (FSM), but the high pressure side of the system never got quite as high as the FSM suggested it should - it got to ~125psi instead of 150-200psi. A bit of research indicated that this could be due to the compressor starting to go, and so that's where I was going to start.

Replacing the A/C compressor means I needed - obviously - need a new compressor. I had a couple reasonable options in this space - OEM or Denso:

I also picked up a few other things for this job. I already had a kit with all of the o-rings I was going to run into from the last time I worked on the A/C system, and as I mentioned then, it's good practice to replace your Receiver/Drier any time you replace a major component of your A/C system. So, then, the following parts: 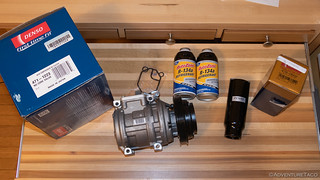 I also - of course - would need to charge the system again, but I already had everything for that, and I've covered how to do that over here, so I won't list it all again: Charging the A/C System on a 1st Gen Tacoma (or 3rd Gen 4Runner).

What follows here is the saga of my specific repair. If you're interested in the step-by-step, with lots of photos version of this job, check out

Replacing the A/C Compressor on a 5VZFE
(Tacoma, Tundra, 4Runner)

This time, instead of starting with the Receiver/Drier, I got started with something that's not a part of the A/C system at all. Two somethings, actually! First, I removed the air intake box, so I'd have a bit of room to work. This is just three bolts, a couple hose clamps, and unplugging the MAF, so it went reasonably quickly. 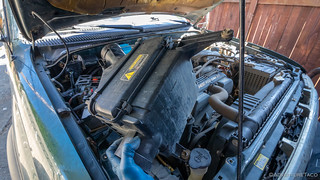 And with the air intake box removed, the next order of business was to remove the Power Steering Pump. See, on a 5VZFE engine, the A/C compressor has to come out the top of the engine compartment. And, the power steering pump is in the way of that being an easy process.

I loosened all the requisite nuts and tensioning bolts to remove the belt that drives the power steering pump, and then disconnected the hoses from the pump. As one does, I spilled power steering fluid - actually automatic transmission fluid (ATF) - everywhere during this process. 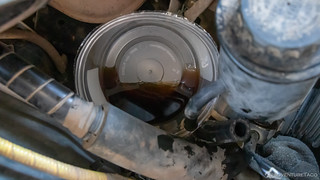 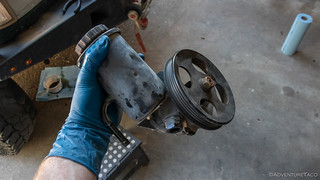 That of course meant that I spent nearly as long cleaning up my mess as I'd spent on the pump removal itself. Fun times. Good practice, I guess.

So, with the power steering pump removed, I repeated a similar process with the A/C compressor - except that it was a lot cleaner, since the A/C system was completely discharged at this point, with nothing to leak out of the lines as I removed them from the compressor. 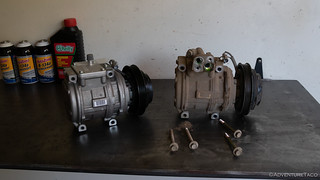 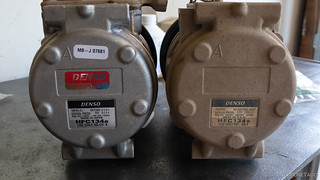 Looks similar, I probably muddled my way through getting the right part.

Transferring the top plate from the old compressor to the new, draining the oil that shipped in the compressor and refilling it with 125cc of PAG46 oil, and replacing all the gaskets and o-rings was the next order of business. All that went smoothly and before long I was ready to put everything back together. 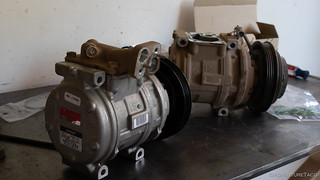 For anyone who's ever had a Toyota FSM, we all know that putting things together is significantly simpler - at least to write about - than removal. It's simply the reverse of removal.

This time though, everything was reasonably straight forward, and in an hour or so, all the belts were tightened, and I was pulling a vacuum on the system and hoping that everything checked out. 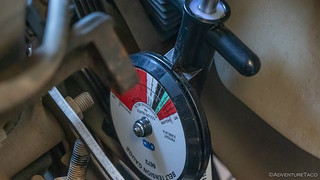 I couldn't believe it after the last saga I had with holding vacuum, but this time it held the very first time. Celebrate? Why yes, thank you!

So, with the help of @mrs.turbodb in the cab - keeping the revs at 1500RPM - I proceeded with Charging the A/C System. With previous experience this seemed to go well enough, and the pressures on the manifold climbed into their FSM specified ranges as I filled the system with the specified amount of R134a - more success!

And with that, as a "glass-half-full" kind of guy, I probably should have considered themselves done and happy. But, I'm not - because I'm not sure the saga is over. Here's why. Three reasons:

So, A/C experts - internet or otherwise - with those three concerns I still have - what do you think? Let me know because right now, I'm just in wait-and-see mode to see if this thing is fixed. And I don't love wait-and-see!

Published in Tacoma Maintenance; experienced on 2020-07-28