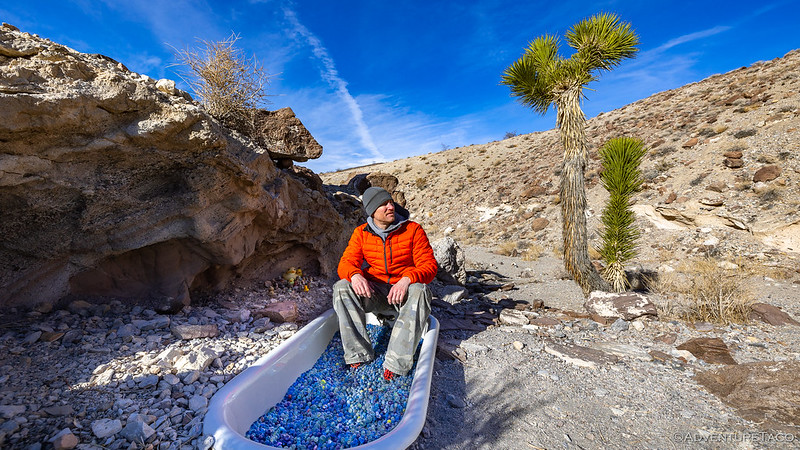 As I mentioned in the first post, I have organized this trip report a bit differently than most. Some of the hiking locations have little or no reporting on the internet and I feel they should remain that way; as such, locations will be redacted and/or not mentioned, and the order of the trip will be randomized.

The first and last posts will cover some of the driving, in order to separate it - and location information - from the hikes. Please, if you know the locations of the hikes, I encourage you to enjoy them as much as I did - and follow my lead to keep them a little less well-known.

As is my custom, I set my alarm for half-an-hour or so before sunrise. As with the time immediately after sunset, this shadowless hour of the day is often aglow with pastel tones and a fleeting stillness that enjoy every time. 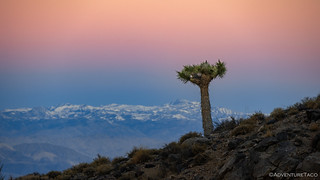 For 50 years or more, Joshua has had a really nice view. 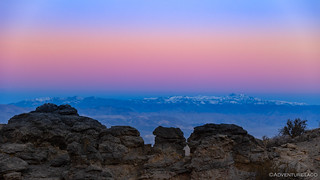 Enjoying the Belt of Venus over the ▮▮▮▮▮  Mountains. The pink band is actually the area between Earth's shadow and the blue sky. 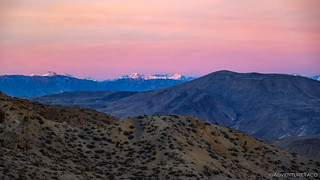 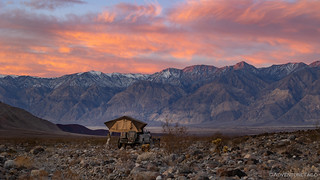 Here, away from the hustle and bustle of the main roads, one can feel all alone in a vast valley of splendor.

My plan for the day - like every one of this trip - was to hike. And - like every day of the trip - the route would begin at the foot of an alluvial fan, my hopes high that my research would pay off, and that within a few hours, I'd find myself immersed in a glorious canyon.

Only today, I was in search of something else, too.

From the look of my clothing in the first few photos, I'd gotten an earlier start than I had on my hike into ▮▮▮▮▮▮▮▮▮▮  Canyon the previous day - the morning chill hanging in the air. In fact, it was only as I neared the top of the alluvial fan that the sun made its first appearance above the mountains that I planned to explore. 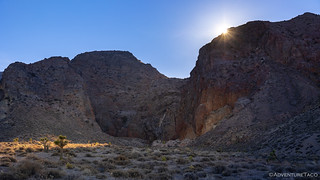 Infinite folds as light spreads across the land.

Before I knew it, success! There, as I rounded a corner in the wash, the morning sun having climbed just high enough in the sky to illuminate half of the contents a brilliant blue, was the Marble Tub. Or, more precisely, a tub of marbles. 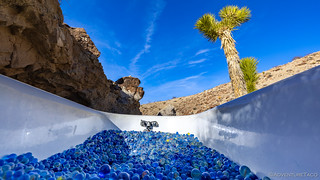 Even just a little bit of sun made the "water" sparkle. 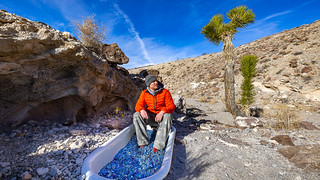 Still a bit chilly this early in the morning. 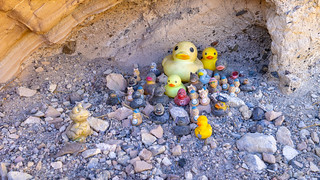 A little creepy, really... all of them just looking out at me, as I contemplated my soak.

After poking around for a bit - hoping that the sun would rise faster and illuminate the rest of the tub more quickly - I finally gave up on the idea of seeing the entire thing bathed in light, and pushed on. You see, not knowing exactly where the tub was, I'd planned an entire foray for the day, which I had no intention of cutting short now!

Entering the canyon, I knew I was in for a special treat. Even at its mouth, the colors of the walls - some in shadow and some in the brilliant sunshine - beckoned me in. 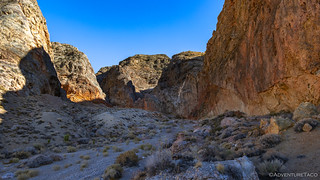 I had no idea what lay in wait as I got my first peek of the narrows beyond the mouth of the canyon.

Almost immediately, the narrows began. Squeezing inward and towering above, I had to consciously slow myself down - the urge to see what was around the next corner, strong. 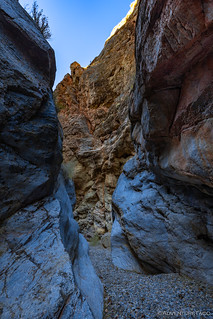 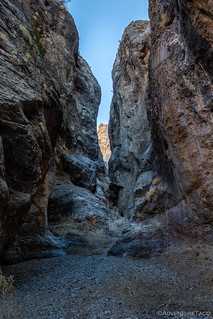 Deep blue polished walls contrasted so perfectly with the warm orange glow of the upper canyon. 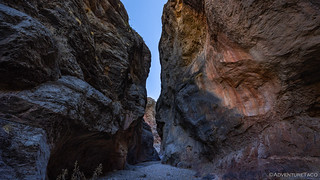 A tight squeeze through a dark passage.

As I wandered the narrows, I wondered whether my investigation would be cut short by impassable falls, my fingers crossed that anything I encountered would be easily navigated - or at the very least, scramblable. 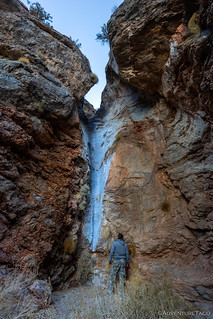 Scramblable? Not even in my dreams. 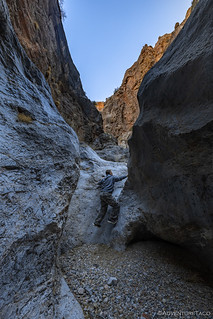 As I climbed this fall, I couldn't help but feel that some of the hand- and foot-holds seemed... suspiciously well placed. Even, perhaps, carved.

And then, as if what I'd already experienced wasn't enough, I the walls themselves morphed into a gallery of art. Gazing at the walls, I found myself transported back in time - to the days when earlier explorers must have done the same. It was, a very special place. 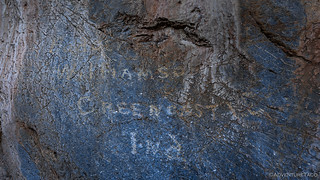 Badger (and) Williamson (from) Greencastle Ind, must have admired the gallery before me.

On a hike full of surprises, I pressed on - curious what I would find next. The answer - to my delight - was more narrows. I didn't know how long they would last, but I certainly wasn't going to complain. 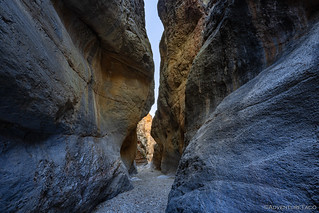 Undulating walls, the colors and textures varied across the entire surface. 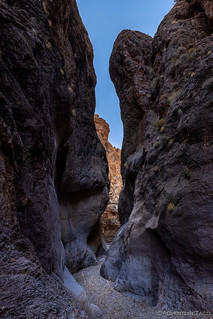 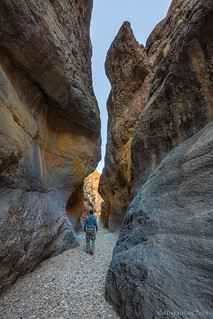 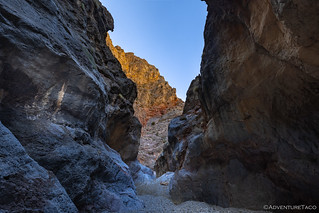 An opening - could this be the head of the canyon? 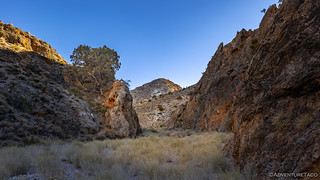 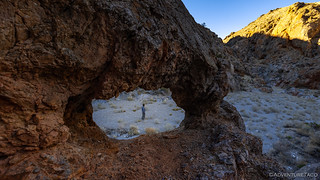 Could this be Death Valley's smallest arch?

At the top of the canyon, it was exciting to see the landscape open up once again. A mountain meadow, as it were, stretched out in front of me. Lush with plant growth and still with a dusting of snow, I enjoyed the spaciousness after the tight walls of the slot. And I imagined - that over the centuries, this meadow would funnel literal mountains of water down through the narrows, carving them into the splendor that they are, today! 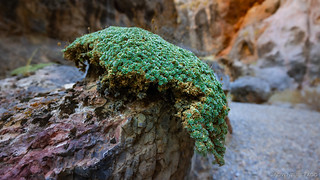 Nature's bonsai. Mat Rock Spiraea - not that uncommon in the broader southwest, they don't seem to be something very common to the Death Valley region specifically.

I must have stood in that meadow for the better part of half an hour. Part of me wanted to push on further, part of me wanted to head back for a relaxing afternoon in camp. In the end, the lure of the smooth walls of the slot canyon was enough to pull me back down the wash, perhaps to visit again to complete my exploration! 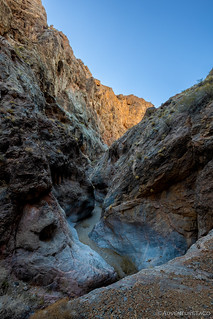 Looking back down as the narrows snake their way through the mountain.

Before long - and after a few dry fall descents - I popped out where I'd started. The mouth of the canyon still shady - though the sun was now spilling across the valley - I took a final moment to reflect on this special place, before heading out onto the alluvial fan, and back towards the Tacoma. 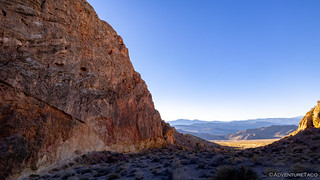 This wall glowed as it reflected light from the opposite side of the canyon. 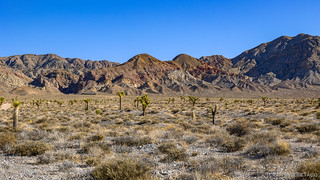 Down the alluvial fan, no trail to be seen. 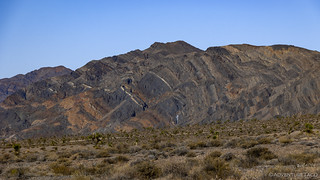 Colorful layers, once laid down horizontally, now standing in near vertical attention.

With two of my three hikes complete, I returned to the Tacoma with my spirits high. The trip so far had exceeded all of my expectations. Little did I know, that my hike the following day would end up being the most difficult - and still, perhaps my favorite - of the entire adventure!

In Search of Grand Views - Hiking #2