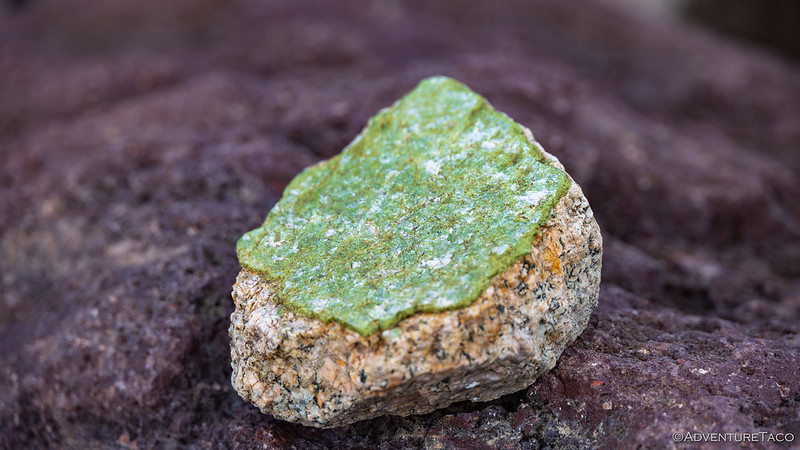 As I mentioned in the first post, I have organized this trip report a bit differently than most. Some of the hiking locations have little or no reporting on the internet and I feel they should remain that way; as such, locations will be redacted and/or not mentioned, and the order of the trip will be randomized.

The first and last posts will cover some of the driving, in order to separate it - and location information - from the hikes. Please, if you know the locations of the hikes, I encourage you to enjoy them as much as I did - and follow my lead to keep them a little less well-known.

The morning of my final hike - but not my final morning - I was once again up early. Having enjoyed previous early morning treks across the expanse of Saline Valley and up the alluvial fan of the ▮▮▮▮▮▮▮▮▮▮▮▮▮▮▮▮▮  on the opposite side, I figured I might as well do it again!

Plus, I was getting up early for sunrise, anyway. 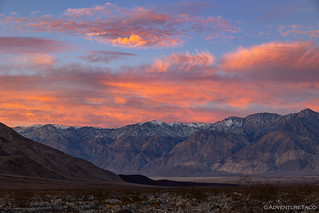 Sunrise over the ▮▮▮▮  Mountains never got old.

Even before the few requisite photos, I'd set about my morning, prepping for my hike. It all started with a heaping bowl of Honey Bunches of Oats with Almonds, more than a quarter pound of blueberries, and plenty of milk - nearly frozen after a cold night - to fill my belly with fuel for what was ahead. Then, a quick laying out of my gear - a similar kit as I'd taken to other canyons on this excursion - to ensure that I wasn't forgetting anything as I set off across the desert. And finally, deployment of my solar panel - not so much because it was necessary on this particular day, but - because I like the idea of getting power from the sun. 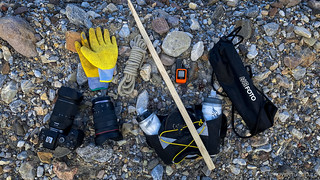 All the fixings for a fantastic day! 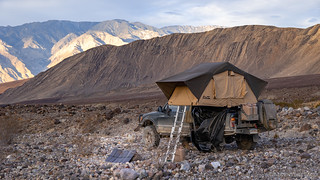 Figuring I might enjoy a nap on my return, I left camp setup and deployed the solar panel to take full advantage of the sun, once it eventually crested the horizon.

My destination on this morning was an impressive little gorge in the heart of the ▮▮▮▮▮▮▮▮▮▮▮▮▮▮▮▮▮ . With towering walls of massive limestone, numerous dry falls, enormous boulders, and massive chockstones, ▮▮▮▮▮▮▮▮▮▮  Canyon is truly a place for desert canyon lovers and geology nuts. Figuring that I certainly tick two of those boxes - a desert canyon lover and nuts - I reassured myself that I'd at least be able to admire the geology, even if I didn't understand it.

I didn't know it at the time, but this hike was far and away the most strenuous and technical of my trip. The constant danger, and endless increases in elevation will delight adrenaline junkies and fitness freaks, assuming that - like me - they also check the box for nuts. 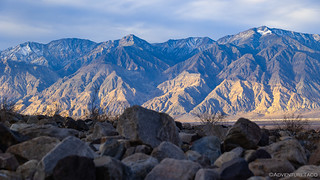 An early view from a wash that I hoped would deliver me to the mouth of ▮▮▮▮▮▮▮▮▮▮  Canyon. 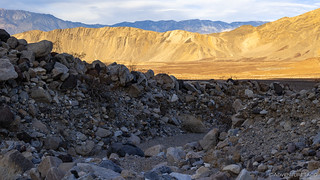 An hour later and still in shadow - with sun sneaking up behind me (!) - I continued up the same wash in the alluvial fan.

Even as I hiked the wash, it was clear that this was going to be a different kind of day than the others on my trip. Rather than a gentle slope to the foot of the mountains, even the alluvial fan was steep. Rocks here seemed bigger, rougher, and sharper. Even in the shade, I was breaking a sweat.

I wondered: would the single granola bar I'd brought along for a snack be enough?

The relentless elevation gain wouldn't stop all day, and while the granola bar was technically enough, it definitely wasn't. But frequent stops to take in the sights around me helped to keep my perspiration and burning quads under control. After all, the views are what I was here for, anyway. 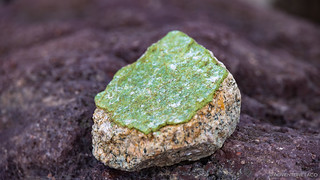 What is going on here, this granite so caringly covered with pistachio frosting? 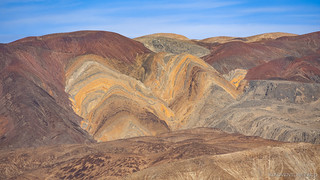 Mountain waves in a sea of red. 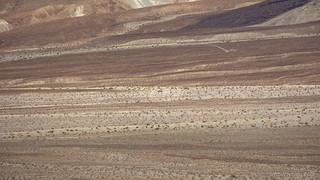 I could just make out the truck with my 240mm zoom, and - dare I say - it was making free power!

Eventually, I made it into the mouth of the canyon. Wider at first, the thing I noticed initially was that it seemed to get steeper with every step - a recurring theme throughout the day. Still, I hadn't come to anything I'd had to climb, yet, and so I continued to push on. 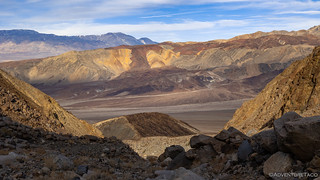 A look back toward the valley, the sun having nearly caught me by this point!

The issue - naturally - is that the ▮▮▮▮▮▮▮▮▮▮▮▮▮▮▮▮▮  has risen so fast that erosion hasn't been able to keep up, and soon I encountered the first to ten - or perhaps twelve - dry falls that I'd climb over the course of my journey. 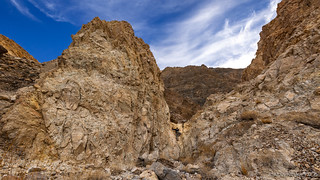 Up we go. Happy to have gloves! 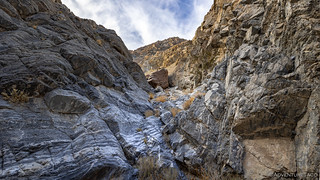 Dry fall number two. Or is this three? It's so hard to tell when the entire place seems to be straight up. 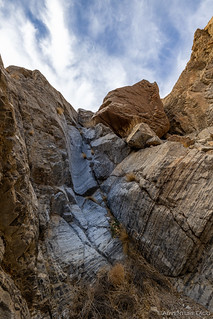 This - according to my notes - is the fourth dry fall. It is a location where most will (or should) turn around. Had I realized the difficulty of the descent, I may have as well.

It is as I show this fourth dry fall that I should note several important aspects of this route, since there will be those who may want to follow in my footsteps.

Every step I took, the ground tilted further up - as though I was walking up an exponential curve. What had once been fist-size river rocks had given way to boulders, and the boulders were getting bigger. I didn't know it yet, but by the end, the size of the rocks in the canyon would get completely out of hand and I'd encounter the inevitable: in one grand fanglomerate finale, the ground would turn vertical. But of course, I'm getting ahead of myself once again.

Between climbs, I found myself marveling at the ruggedness of the canyon. It was so different than the smooth, narrow slots I'd found myself enjoying so far on this trip - a welcome change of pace, even though I'd expected more of the same when I'd set out from camp. I took frequent breaks to take note of the details. 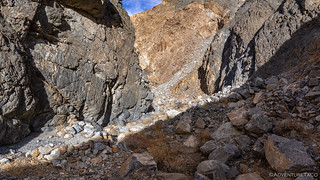 Below the third dry fall, a short rock wall clung to the side of the canyon wall (bottom left, along the shadow line). Why had it been constructed, and by whom? 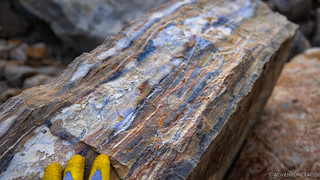 Geological lasagna, each layer carefully crafted for your viewing delight. 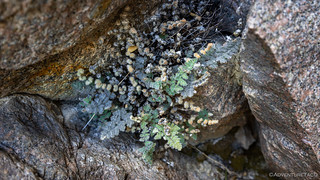 A small, fuzzy fern. These seemed to be growing throughout the canyon, but only in nooks and crannies, in places that never received direct sunlight. 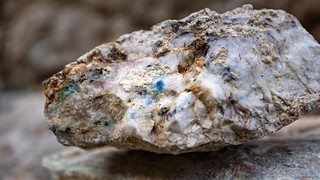 Fossilized birthday cake. I've never understood the draw of the little colored spots; maybe I was just a downer as a kid. 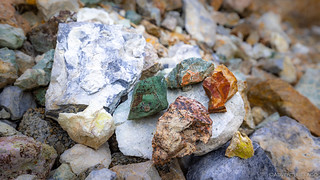 Ka-pow! I found all of these colorful rocks within a single arm's length of each other. Such a joy of color.

Higher and higher I climbed. After the fourth - or fifth - dry fall, the canyon split. Deciding to leave the main canyon as my finale, I took the side fork, sure - as I climbed fall after fall - that this must be the steeper of the two. And it was, until I returned to the convergence of canyons, and started up the main canyon. A stair climber - from beginning to end - is how I'd best describe the experience.

Usually, when hiking an out-and-back canyon, I find my first time through - in the out direction - to be my favorite. My first view of the walls, the surprises around each corner - these are the things that tend to get me excited. Here, in ▮▮▮▮▮▮▮▮▮▮  Canyon, the highlight - for me - were the descents back. With such a steep grade, the views from various positions of the canyon were breathtaking. Easily missed when huffing it up the rocky vee's, they were more than reward enough on my way back down. 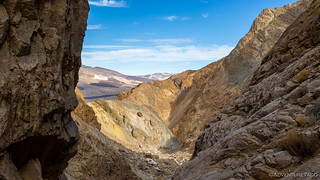 In some places, the view stretched all the way to Saline Valley. 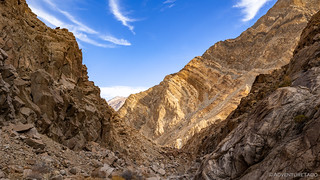 In others, the sun illuminated distant, layered ridges, a brilliant gold. 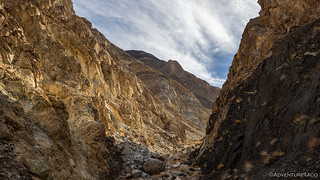 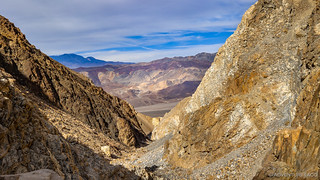 Framed by a steep vee, it's a long way down.

Ultimately, the climb culminated in an impassable fall. Technically the tenth dry fall of the canyon system, the boulder field that led to its base was short, but imposing. Each boulder the size of a car - or larger - required careful navigation as I hopped from top to top. 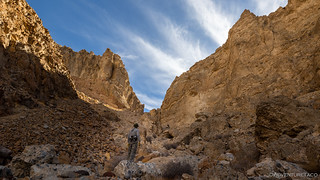 I found where all the small rocks in an alluvial fan come from - their lives began as part of these enormous conglomerates that stood in my way. 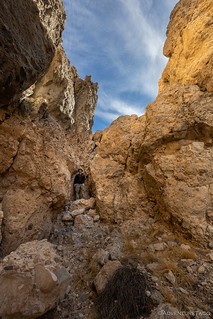 The final dry fall. Twelve feet tall, it looked climbable, until I reached up and realized that the walls easily crumbled in my hands.

My ascent complete, I carefully picked my way back down the canyon. The views - as I've mentioned - were fantastic, which helped to offset the painful pounding that my knees and quads took on the way down. This hike - as much as any I've done in the last year - reminded me how much I prefer hiking uphill, something I'd never have suspected when I was a kid!

Still, the canyon had exceeded all of my expectations - I couldn't have envisioned a better day. 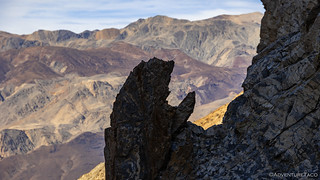 Petrified Orca, frozen in time just before taking a bite out of the mountain.

Heading back down the alluvial fan in the heat of the mid-day sun. 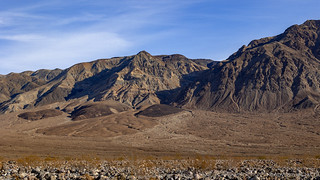 Looking back up the way I'd come.

Back at camp, it was mid-afternoon when I reached the Tacoma. The route - at nearly nine miles - was similar in length to the others I'd completed, but had taken significantly longer due to the unrelenting terrain. I was happy to be back, and I quickly made lunch and climbed into the tent for a well-deserved nap!

It was just before sunset when I awoke and exited my perch to bask in the glow of the late afternoon sun. 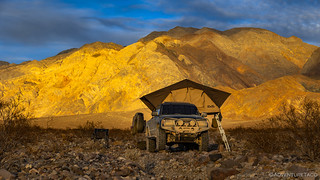 The hills were on fire. 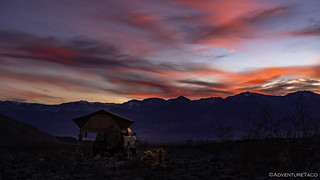 An already great day sported a sunset to savor.

After a bit of reading, and watching of lights elsewhere in the valley, I climbed into the tent with my APRS beaconing away. I didn't know for sure, but I hoped that one set of those lights belonged to Mike @mk5, who was going to try to find me in the vast wilderness, if he could pull himself away from work for a weekend in the desert.

If he could, I wondered if I'd wake up to a second Tacoma in camp. Only time would tell.

In Search of Grand Views - Hiking #2