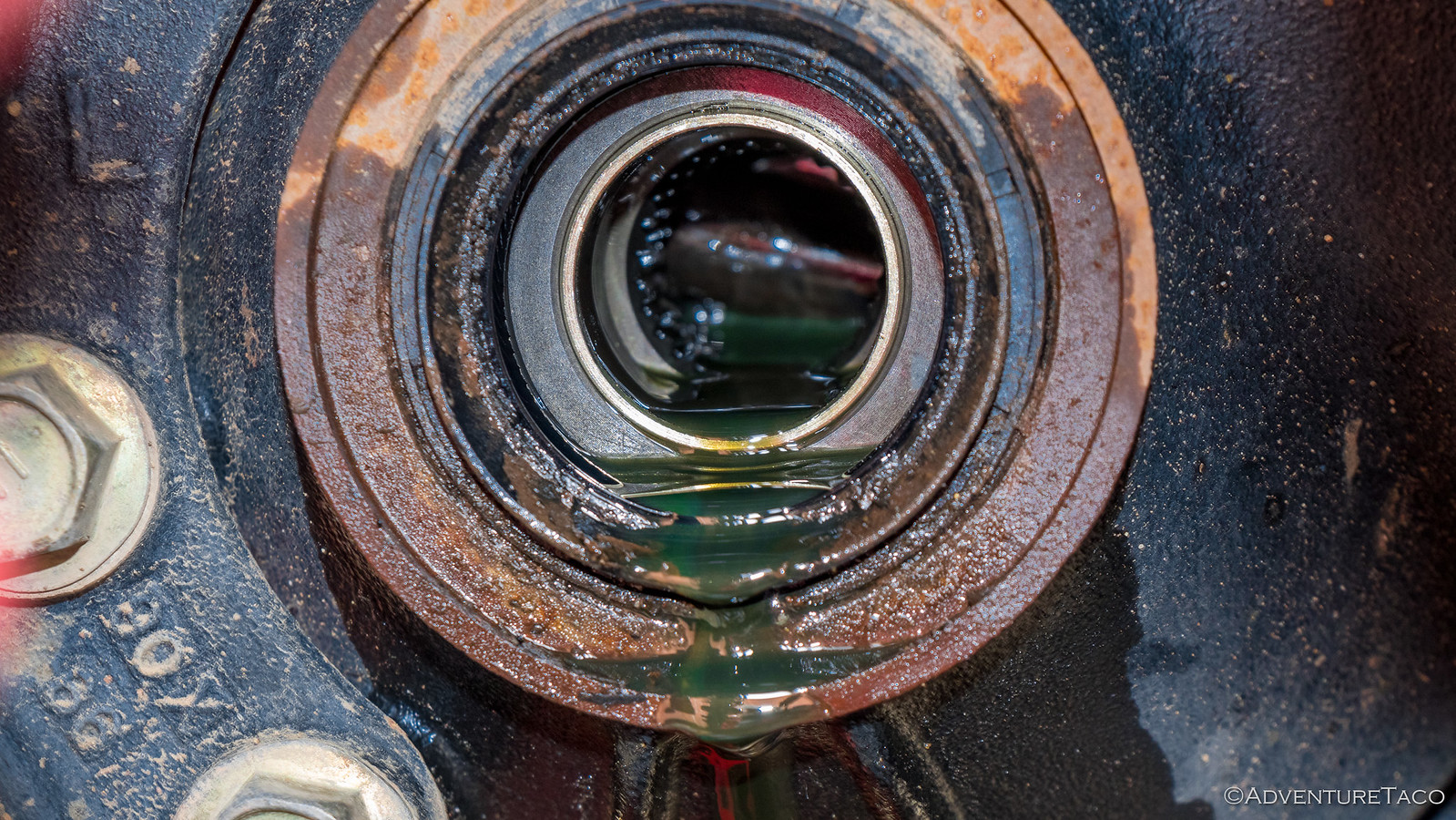 My Front Diff is Leaking (...and Fixing It)

It was just a couple days ago that I noticed my front diff was leaking.

Actually, I noticed it only because I was replacing my AC idler pulley for the second time in a month - having replaced it on The De-Tour last year and recently again with less than a week of the F.U. Rain trip remaining. I sure hope this time lasts longer than a week on the trail and a few muddy water crossings! 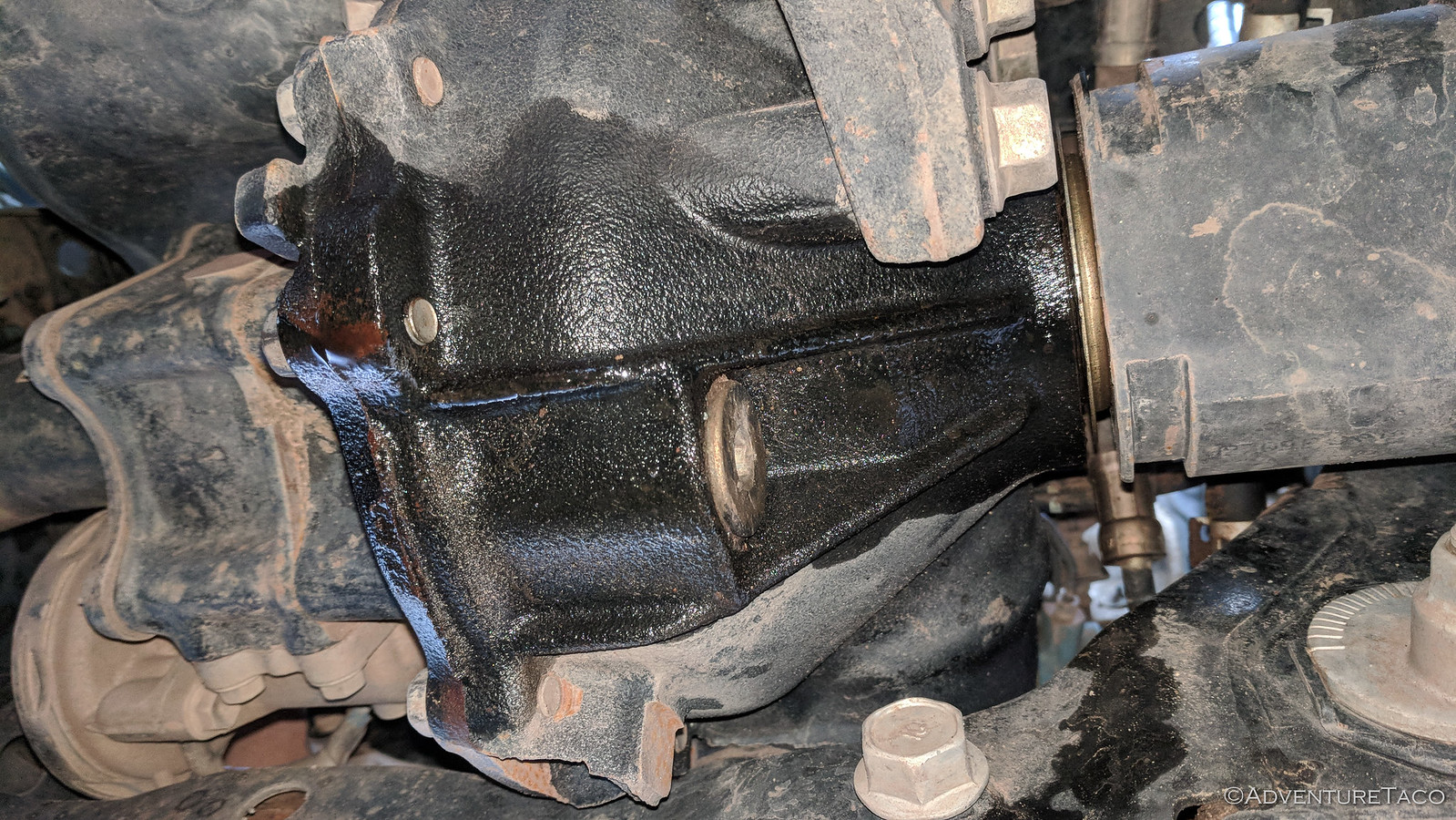 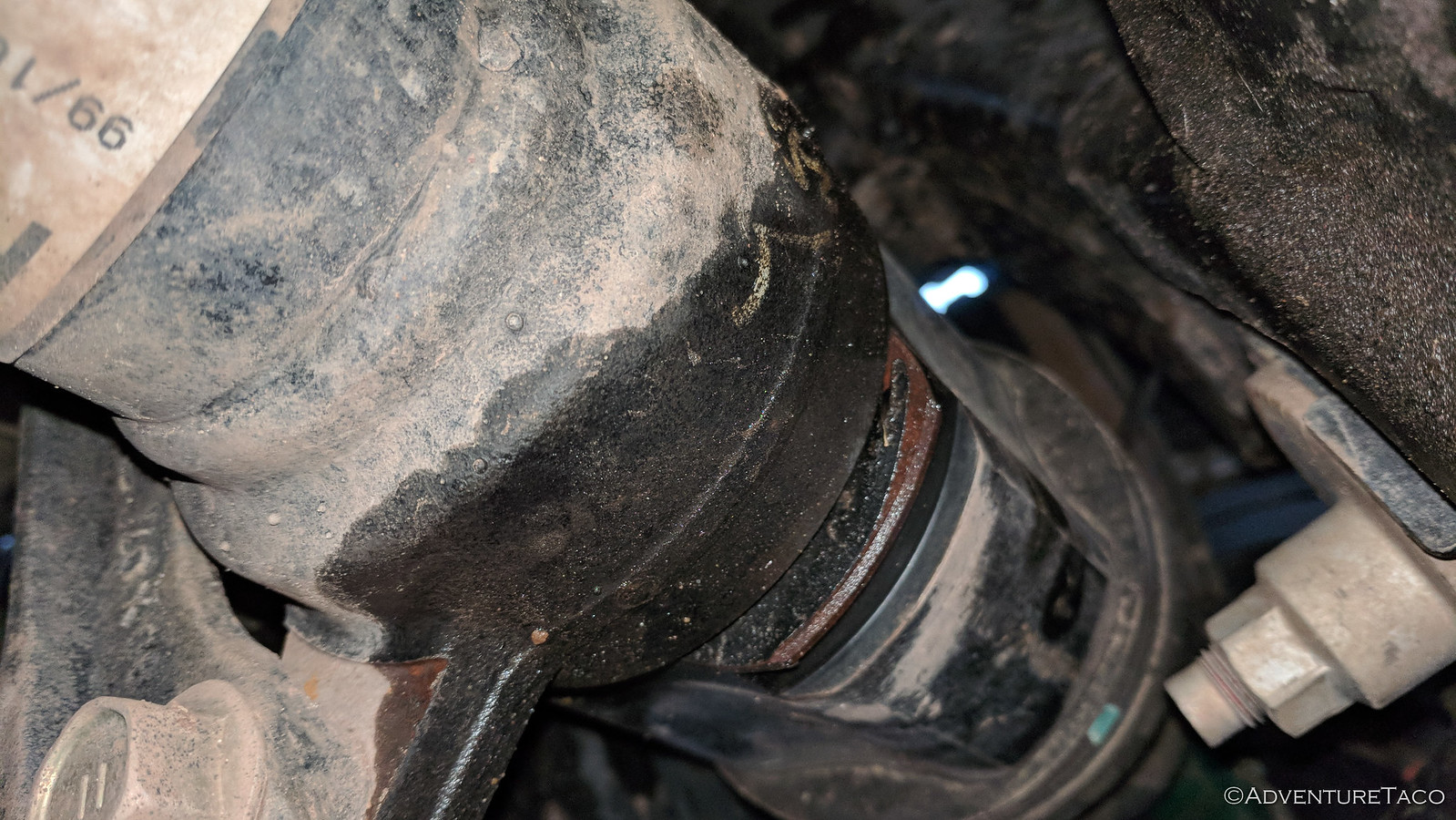 That's of course not expected and no good, so I wiped off the (little) excess gear oil and consulted my normal reference sources - Carl at JT's Parts and Accessories, and a few hours later - the good folks of TacomaWorld.

Carl - as always - was quick to get back to me. He wondered if my CVs were the originals (which I confirmed for him that they were) and suggested that as originals, they may be getting worn...thereby wearing on the seals that the seal against the machined CV surface that is inserted into the front diff.

His suggestion - take out the CVs to look at the machined surfaces and seals. Replace the seals and/or the CVs.

TacomaWorld too was quick to get back. Others had - and were currently - experiencing the same issue. And, while worn CVs seemed like an unlikely culprit to them, there was general agreement that the terrain over which the Tacoma had recently been through could have caused dirt to get into the seal - unsealing it as it were, and causing it to leak.

Their suggestion - a good cleaning of the area, and then if there was still oil, take out the CVs and look at the seals to see if they are dirty. Inspect the CVs at the same time since they are out. Clean and/or replace anything, as necessary.

Well, I felt like I'd already cleaned the area well when I'd washed the truck from the last trip, so I decided it was time to take out the CVs and check out the seals and shafts. I wasn't going to replace anything just yet - I didn't have any replacement parts - I just wanted to get at good look at the situation.

My plan of attack would mirror what I'd learned from Mike @Digiratus when I'd helped him remove his axles a couple times previously - first, take off the wheel. Then, remove the hub. This turned out to be the hardest part of the job, my hubs never having been removed previously. Probably took me a good 30 minutes to get the first hub off. And when I did, I didn't love how it was a bit chewed up. 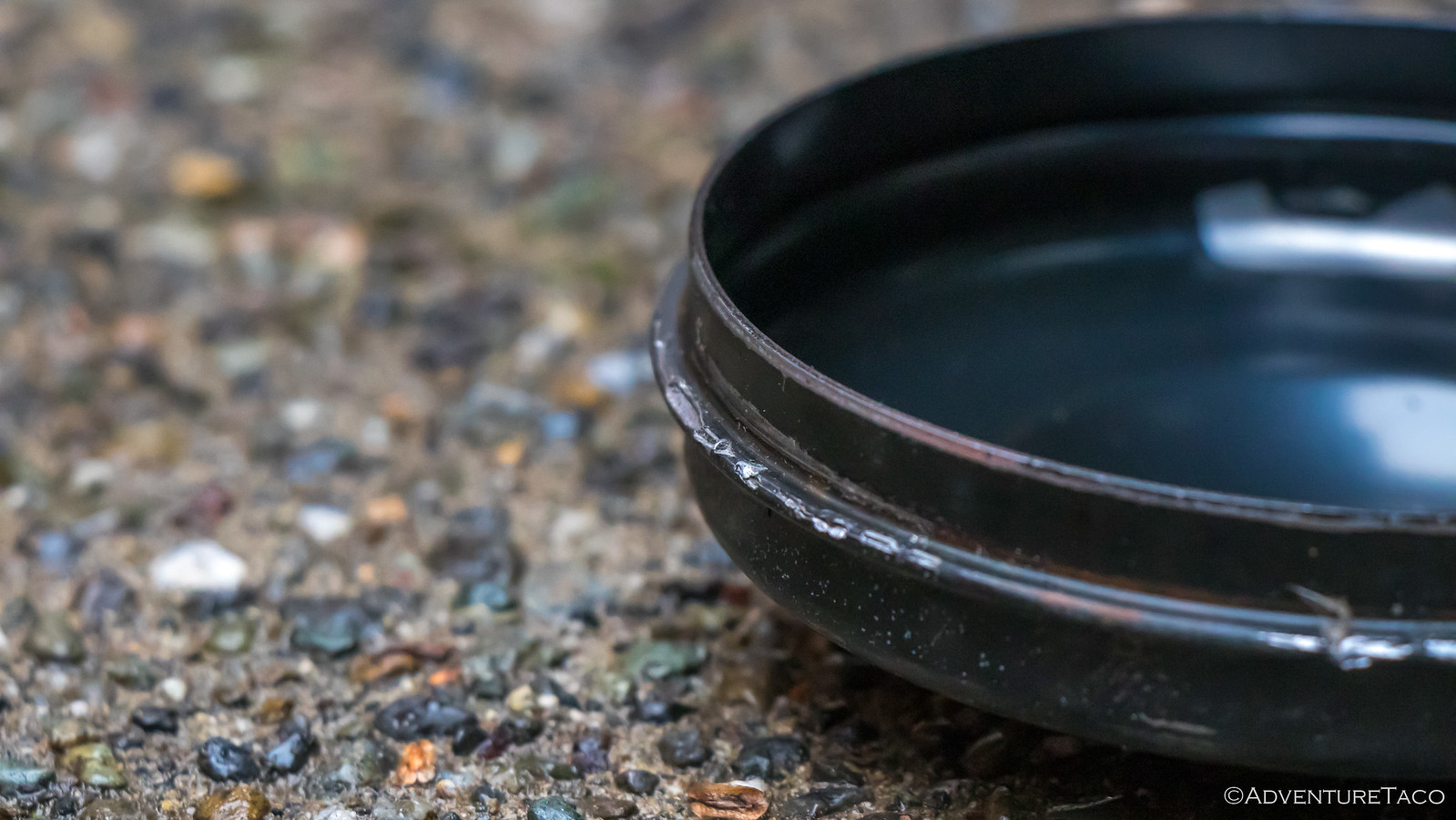 Next, it was time to remove the axle nut, and it came off easily enough with the impact wrench. 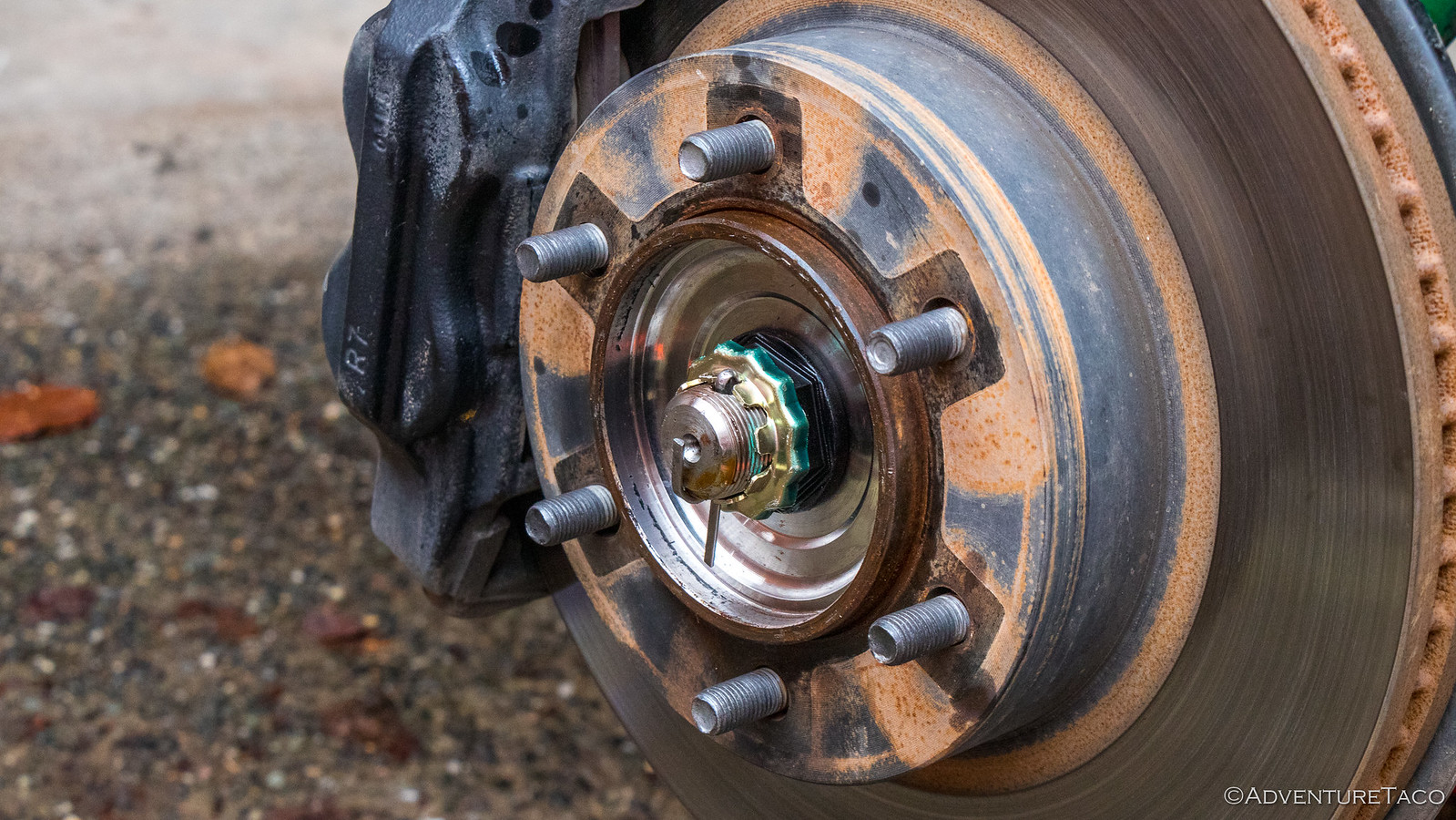 Then, it was just a matter of backing out the four, 14mm bolts that secure the lower ball joint to the lower control arm and I was able to slide the CV axle out of the wheel bearing and set the rotor, bearing, etc. aside so I could pry and then pull out the CV itself - of course, a bit of diff oil coming out as well.

CV extracted, I took the time to give both ends a good once over - there was definitely some grime - a combination of grease and dirt - on each end where they contacted their respective seals - so I cleaned both ends up well before applying a new layer of grease. Both ends of each CV seemed to be in great shape otherwise - they weren't rough or chewed up; hopefully an indication that the CVs don't need replacing. 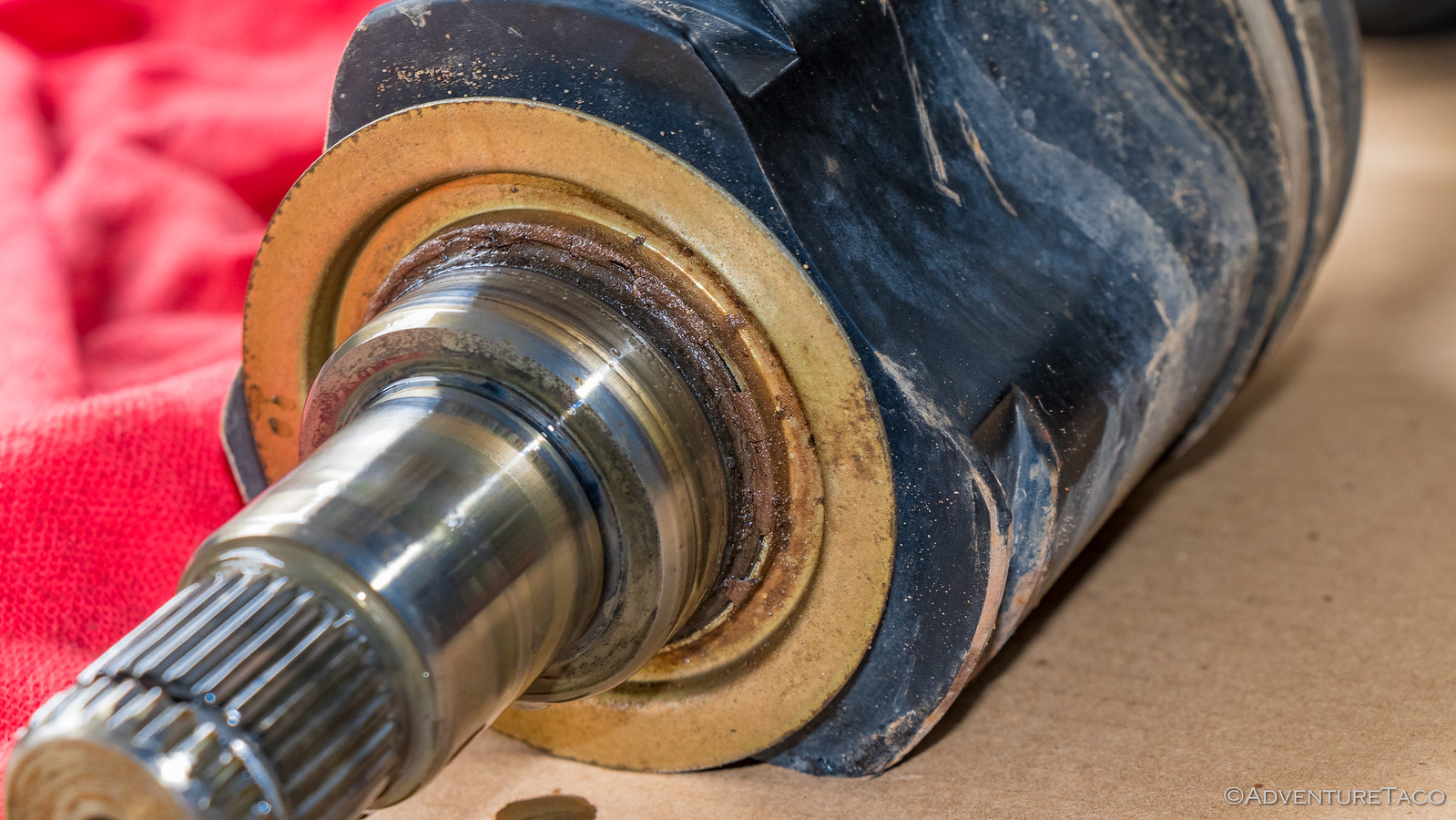 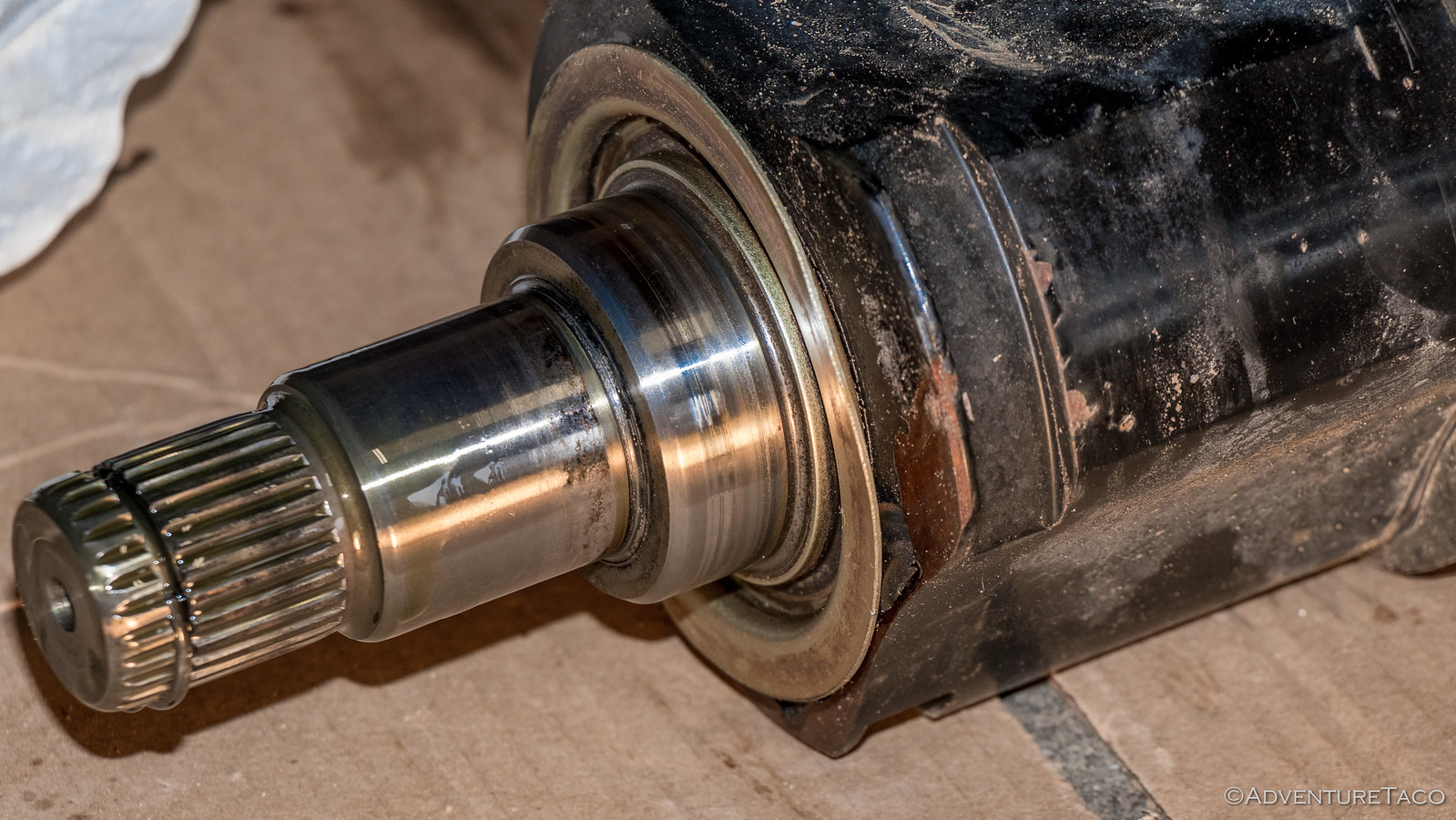 I inspected the output shaft seals in the diff as well - also grimy with perhaps a bit more dirt than the CV itself. I cleaned those up and got the CVs reinserted and everything buttoned back up with the correct torque specs (59 ft-lbs and a bit of blue Loctite for the LBJ bolts; 174 ft-lbs for the axle nut)

Time will tell if that was enough. For now, while the truck is stationary, I don't see any drips. I sure hope it stays that way!

Update: December 15, 2018 - still no leaks, even after several thousand more miles on the truck. Looks like it was the dirty seals; good to know for next time!

Published in Tacoma Maintenance; experienced on 2018-11-25