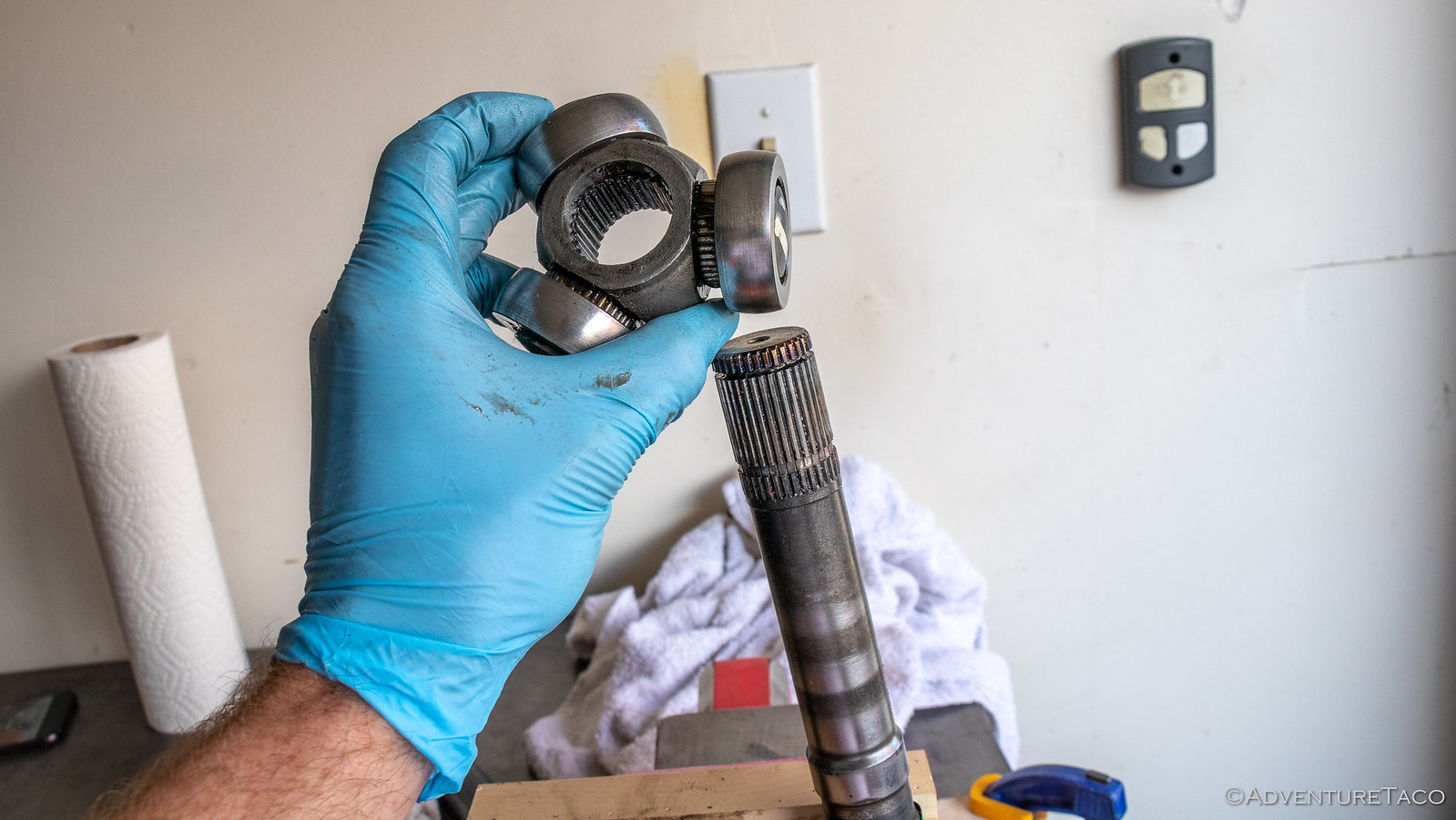 Just to set expectations - there are no amazing photos in this post. Actually, there are no photos at all - it's just a story. A story of how my day started off one way, and ended another.

Come laugh with me, and enjoy!

So, today I was going to work on the 4Runner. I've been getting it into shape so that it can become our family adventure vehicle and daily driver. As such, it's getting a lot of love in the "let's make sure that key parts are in known condition" department - today's work was going to be new lower ball joints (LBJs) and outer tie rod ends (OTREs) - the last of the front-end work I had left to do.

Oh, and if you don't know what those are - don't worry, they exit the story in a paragraph or two.

Having replaced the LBJs on the Tacoma, I figured this would be reasonably easy. I'd ordered the parts and - as seems to happen - they had been sitting in the living room for a week or so. The LBJs were of course Toyota OEM. I don't know if there's any real difference between OEM and high quality aftermarket LBJs, but with a part like that, I'm not going to risk it. The OTREs were not OEM. I'd heard from several folks that ordering ACDelco ORTEs would result in 555 (a brand) OTREs showing up at my door, and the product photo on Rock Auto seemed to back that up.

When they'd arrived, I'd opened one - you know, just to be sure it was the right thing - and it was; so I closed up the box and left both of them in the living room.

Fast forward to today. It's 10:00am and I'm ready to take a couple hours and change out the parts.

Now, anyone who knows me knows that I'm a creature of habit. So the first step is to get the new parts and take a photo - because after all, that's how a new post about AdventureTaco starts, right? Plus, this time I have an ulterior motive - I want to take a photo of the LBJs I ordered - with the part number visible - because there's always a question online about which LBJs come with new bolts, which these do!

So I guess I'm both a creature of habit, and a little cocky.

So I lay out the LBJs, and I start laying out the OTREs with them. With the first one positioned on its box, I open the second box and I'm like, "What is this - did they send the wrong part?!" The second OTRE not only looked completely different, but it functioned differently. It had a grease zerk and a weird blue dust boot, for goodness sake!

This wasn't going to do at all. I could not have different OTREs on the left and right of the 4Runner, my OCD just wouldn't stand for it.

There's a lesson here for me: ACDelco might usually send 555 parts that match their photos, but they don't always.

...so I ordered another one - also ACDelco, but from another vendor - and I've got my fingers crossed.  ...and I clearly haven't learned my lesson.

OK, so the plan for the day is shot... but that doesn't mean I can't get something done. After all, the Tacoma needs some work too - the passenger CV axle tore a boot on the last trip to Utah. And, I've got the reboot kit (

: in the living room) so I might as well take an hour and get that done.

After-all, it'll be quick since I just recently changed the driver side.

For the first half hour, it was quick. I got the wheel off, CV out of the hub and diff, and the CV itself broken down reasonably quickly. It's amazing what a little confidence (and no photos) will do for speeding up something that previously took all day.

Nearly ready to start putting everything back together - my last step is to use brake cleaner to clean off the roller heads that I've removed from inner splines of the CV. Easy peasy.

So here I am, out in the alley behind our house, the roller heads on an old amazon box, me manipulating the rollers in and out as I spray it with brake cleaner. Just like I'd done last time. But then, unlike last time one of the rollers comes off.

I was caught so off-guard that I didn't even really know how to react. I mean, that was not supposed to happen, says so right here:

Of course, the roller coming off wasn't really the Worst Part. The Worst Part™ was that under the roller are some huge number - I was too flustered to count - of little, tiny, 1mm x 1cm needles.

That's hard to picture, so picture this - lots of little soldiers (the needles) standing right next to each other around the base of a tree (the post). And wrapped around all the soldiers is a really big hula-hoop (the roller). Yeah, hula-hooping soldiers in the forest; just go with it.

Anyway - essentially - or at least as close as I (some guy who doesn't know much) can tell - each of the three rollers is the outer surface of a needle bearing, and the rollers and needles are held in place with a capture ring. And that capture ring is in turn held in place by a snap ring.

And for some reason, mine's not holding the roller in place anymore.

I cursed, as one does.

To my surprise, the problem was not resolved by my cursing.

I decide I should try something different, so I gather up the parts - luckily, I seemed to have not lost any of the little needles - and went back into the garage.

My only options, really, were to try to "fix" what I had here, or install an aftermarket CV axle in the truck (which I didn't want to do). And I had no idea how to "fix" this.

But I figured it started with trying to get the snap ring and retaining ring off. the problem was, the ends of the snap ring were way to close together for my snap ring pliers to work. My cunning plan was stumped before I got started.

So I moved to plan #2. Plan #2 was to do the impossible - namely, line up all the little needles around the shaft, and then try to slide the roller over the retaining ring and needles. I want to reiterate that this should be impossible, given that the retaining ring is supposed to keep that roller from moving off the rollers in the first place.

So I somehow get all the needles positioned around the post without having them fall to the ground, and I try to slide the roller on. You know what happened - and you can stop laughing now - all the little needles fell to the ground - the minor disturbance of the roller enough to send them in all directions.

I cursed. It still didn't fix anything.

Damn it. (There I go again, cursing.)

But then I had a medium-good idea. I'll spread a bit of grease around the post so that the needles stick to it when I try to put the roller on. And, to my surprise, they do. And to my super surprise, I'm able to slide the roller on.

IT'S A MIRACLE! I've done the impossible. My parents were right, I am special.

So now I'm thinking to myself - I need to get this all put back together so I can get it back in the truck (so I can just move it back into the garage). Then I order a remaned CV from CVJ, and get that thing installed before I go on any more trips - because who knows how long this thing's going to last?

And, as a snap ring does, it slips off the pliers. As snap ring pliers do, they jerked out a bit. And as luck does for me, they knocked the roller that can apparently jump it's retaining ring and knocked it off again.

Fudge knuckles. Are you serious?

But, I see that all my little soldier needles seem to all still be lined up around the post, so maybe I can just slide the roller back on - after all, I've proven I can do the impossible once already, right?

And low and behold - I did it again. The roller slid right on.

Saa-weet. I don't even care that this has taken 4 hours at this point, I've done the impossible twice. That's worth 4 hours any day.

So, I spin the roller just to make sure everything is working. --- Nope. It's not. The little needles are binding up. And yeah, I can see why - one little soldier needle has gone MIA.

Where are you little soldier needle? I start looking on the ground - nothing. Workbench - no needle. This. Isn't. Good. 30 minutes later, I find the needle. It's at the bottom of the boot, in one of the fins/folds - so I fish it out with some needle nose pliers and make a difficult decision - I need to pull the roller off the other needles so I can slide this one in.

So I do, and then - and I really shouldn't be all that surprised about this anymore - I'm able to get the roller back on again. I'm really starting to think I'm not that special anymore.

Anyhoo, I with the roller assembly back together (for now), I get the snap ring pliers and go to work again on the snap ring. They slip again. The roller almost comes off again - I mean, it was like 60% of the way off - it's like a comedy of errors - but I was able to stop it before it came all the way off.

Eventually, I get the snap ring in place and the inner boot on.

And from there on, it's smooth sailing - the CV axle into the diff, then into the hub, then the LBJ reattached and the wheel reinstalled. Oh, and I refilled the diff since a bunch of oil had leaked out in the 1 + 4.5 hours that this project had taken.

But hey, I'd learned two things: First, cursing doesn't solve all problems. And second, you should only do impossible things once - when you do them two or three times, it doesn't have the same wow factor.

Published in Tacoma Maintenance; experienced on 2019-04-15