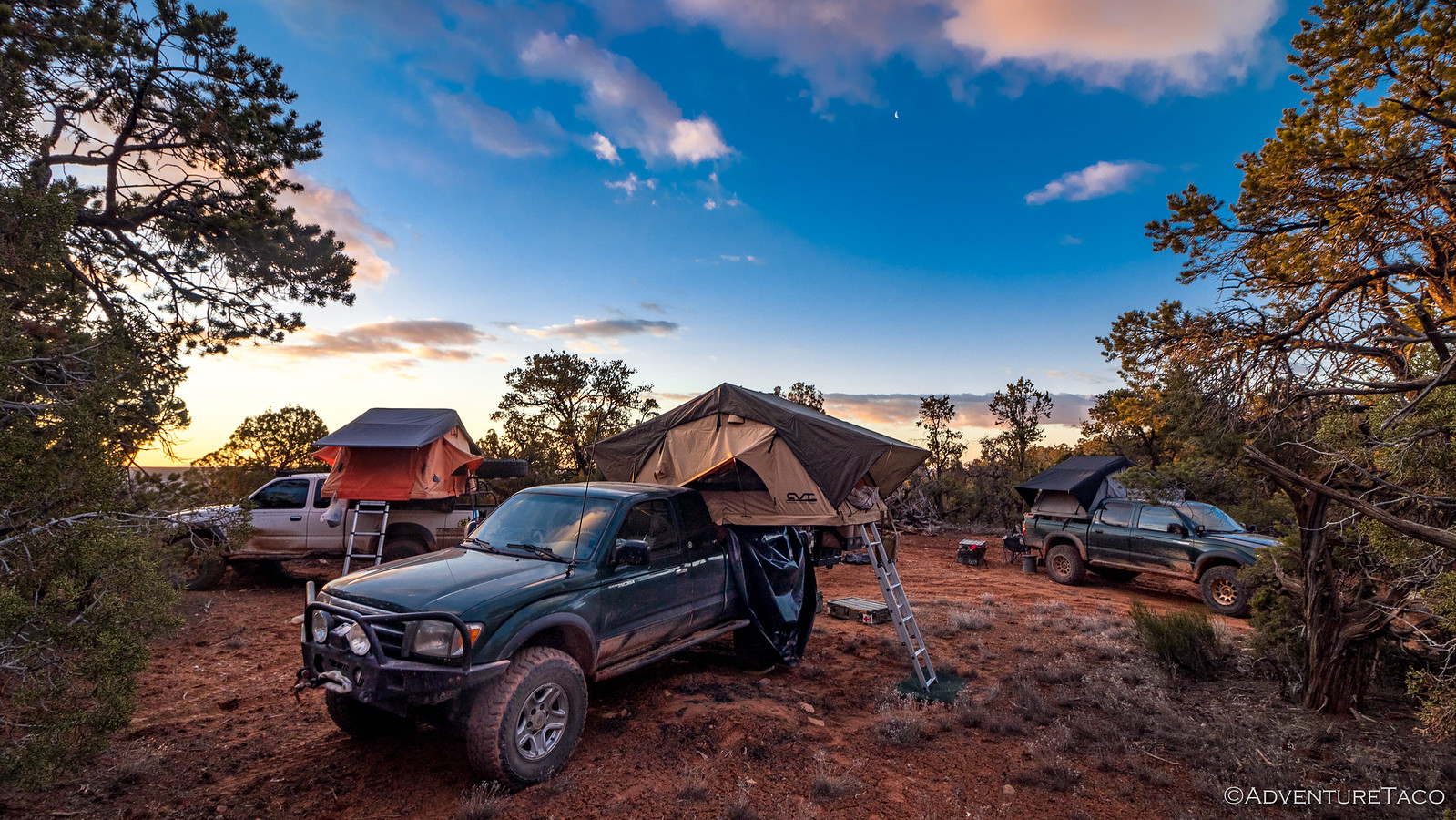 Ruining Around Utah 6 - Hite to Home

I was sure to get up early for our last morning in Utah - our location on the top of a plateau ideal for capturing the sunrise over Bears Ears. 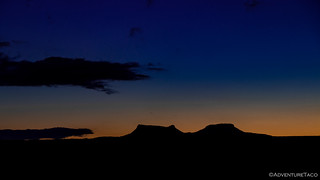 As it does, the light started subtly, working it's way to brilliant oranges and pinks above the horizon - one of the best sunrises we'd had all trip. 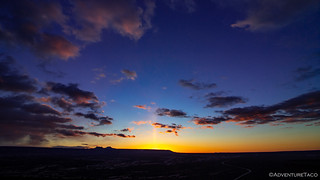 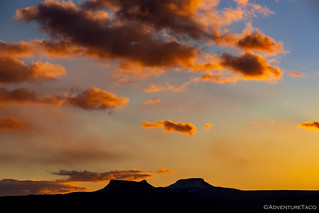 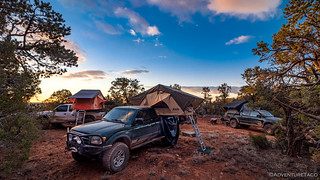 But, that was seriously misleading. Behind me to the south west, a south westerly breeze was pushing clouds on the horizon closer. They were far enough away that I didn't even take notice as I climbed back into my tent to enjoy a couple more hours of still-warm comforters, before getting up for our always-delicious shared breakfast.

Having dozed off to sleep, I was awoken by an unusual sound about an hour later. It sounded like small grains of sand landing on the tent and rolling down the rain fly. Rain? No - it definitely didn't sound like rain, which lands with a single drop. A squirrel in a tree above, dropping pieces of pine cone on the tent? I didn't think I'd parked under a tree...

I decided it was worth opening my eyes to check it out - and I couldn't believe it - snow! Rather, a sort of snow-hail hybrid, pinhead sized balls of snow falling on the rain fly and rolling down the fly onto the ground. That sure didn't bode well for breakfast!

These flurries lasted for an hour or so - a break allowing us to climb out of our tents and get everything mostly dried off and put away - the temperature and breeze helping to keep the snow mostly frozen until it sublimated back into the air.

A quick pow-wow, and we confirmed that breakfast was off - we had no idea how much snow was in the forecast, and we preferred to not find out. Instead, we headed out - our usual breakfasts consumed quickly so we could get down off the hill. 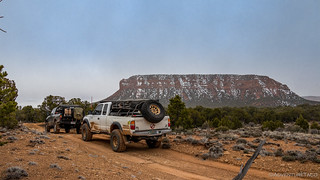 Back on the highway, we headed north towards Hite and back into sunny weather - the Henry Mountains that we'd seen all trip now much closer and warranting a bit of admiration at a road-side pullout. That also gave Monte (@Backdawg) the opportunity to mess around with his CB antenna a bit - it's incessant screeching when he keyed down, more than any of us could bear. 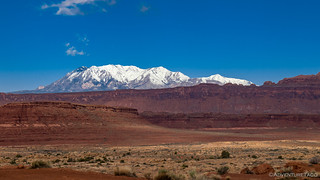 Having found the issue - a frayed coax cable to the antenna - and jiggled things a bit, he was good to go for the time being, and we got back on the highway, passing over the bridge between Hite and the Hite Overlook. The bridge - the only automobile passage over the Colorado River between Glen Canyon Bridge (185 miles downstream) and US 191 near Moab (110 miles upstream) and was built in 1962. It marks the upstream limit of Lake Powell and the end of the Cataract Canyon of the Colorado River.

Oh, and it looks pretty cool, especially with a couple Tacomas about to cross. 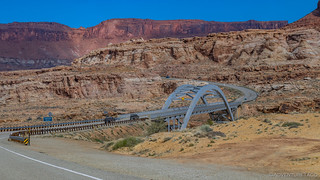 We made a quick stop at the Hite Overlook as we passed by. I was glad I'd seen it not too long before - the clouds covering the sky in front of us today, and the sun to the south making for a harsh view of the vast landscape. Of course, it was still a beautiful view - so here's what it looked like the last time we visited. 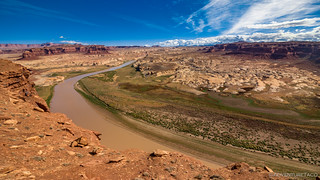 From there, we continued north - one more stop before we'd planned to part ways - to ▮▮▮▮▮▮▮▮▮▮ . There was one last set of pictographs we wanted to visit, a fitting end to an amazing trip. As we explored along the canyon walls, we finally spotted what we were looking for - so close to everything, and yet so obviously rarely visited!

And it was amazing. The largest drawing we'd seen, the level of detail was much more intricate than the other art we'd seen - different color pigments and carving all used together to create a clearly royal work. 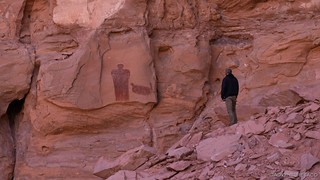 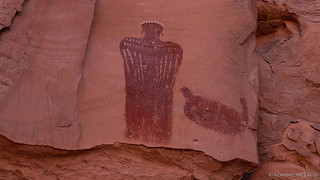 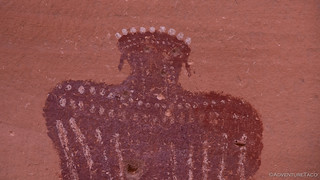 And with that, we were mostly done - there was gas to get in Hanksville, and we didn't actually part ways with Brett and Heather (the @BossFoss's) and Brent (@PcBuilder14) until Green River - but our off-pavement adventures were behind us. 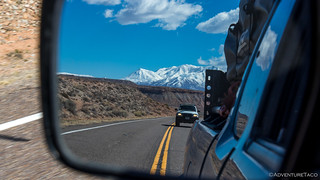 Smiles and see-you-laters all around, I, Monte, and Devin headed north towards Salt Lake City, where they'd head eastward toward home at that point as I continued north and west.

Having gotten a late start, it was dinner time when we parted ways - on the one hand, wishing we could camp one more night; on the other, knowing there'd be another trip to come. 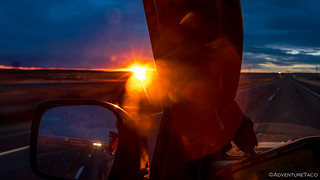 Through Idaho as the sun set, I had another 9 hours or so to go. It'd be 4:00am when I finally pulled into the garage, my third 20-hour drive in two weeks complete - and totally worth it!

Get out there and explore - it's more fun than you can imagine. 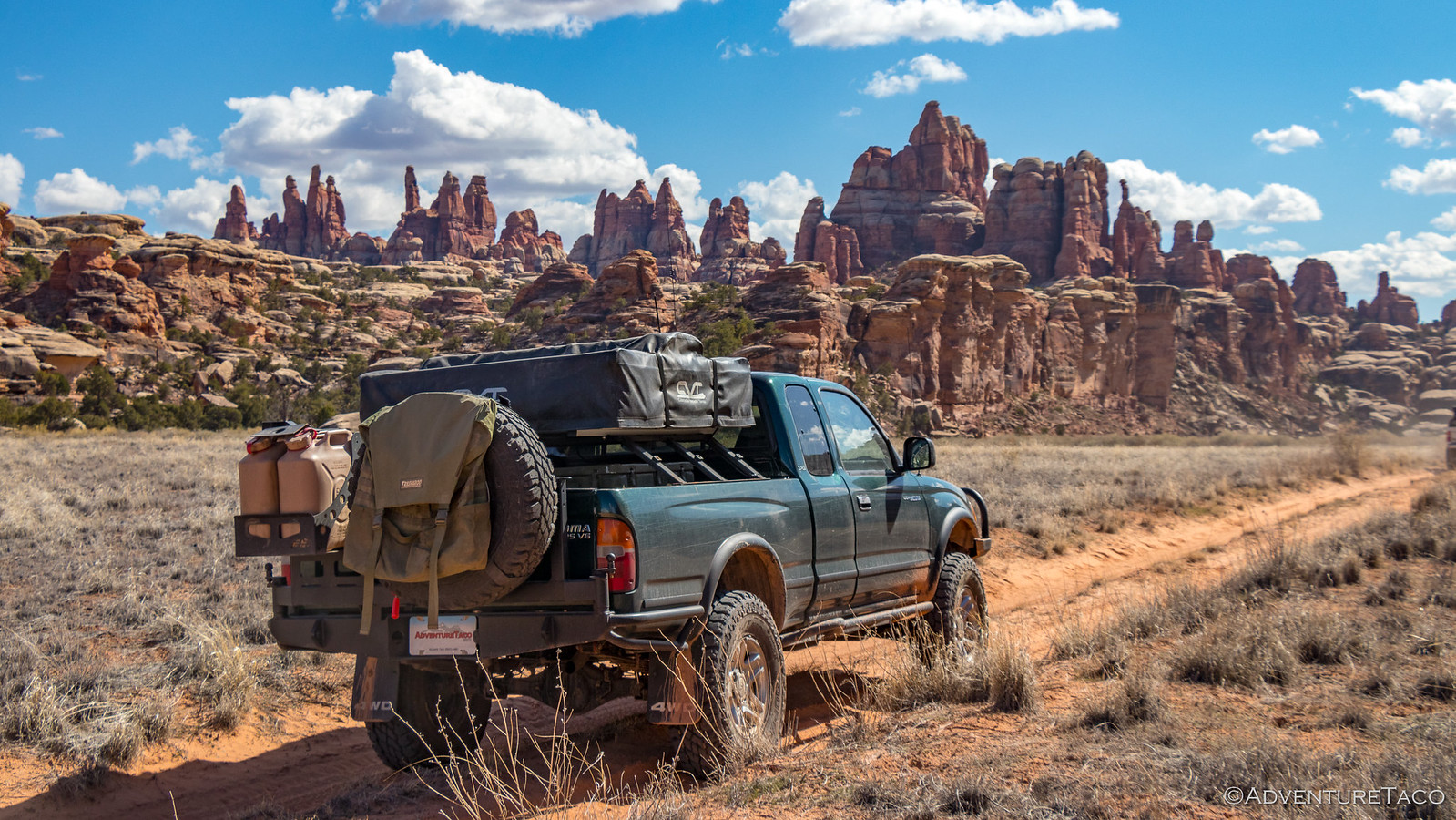 Ruining Around Utah 1 - Stopped in our Tracks at The Needles 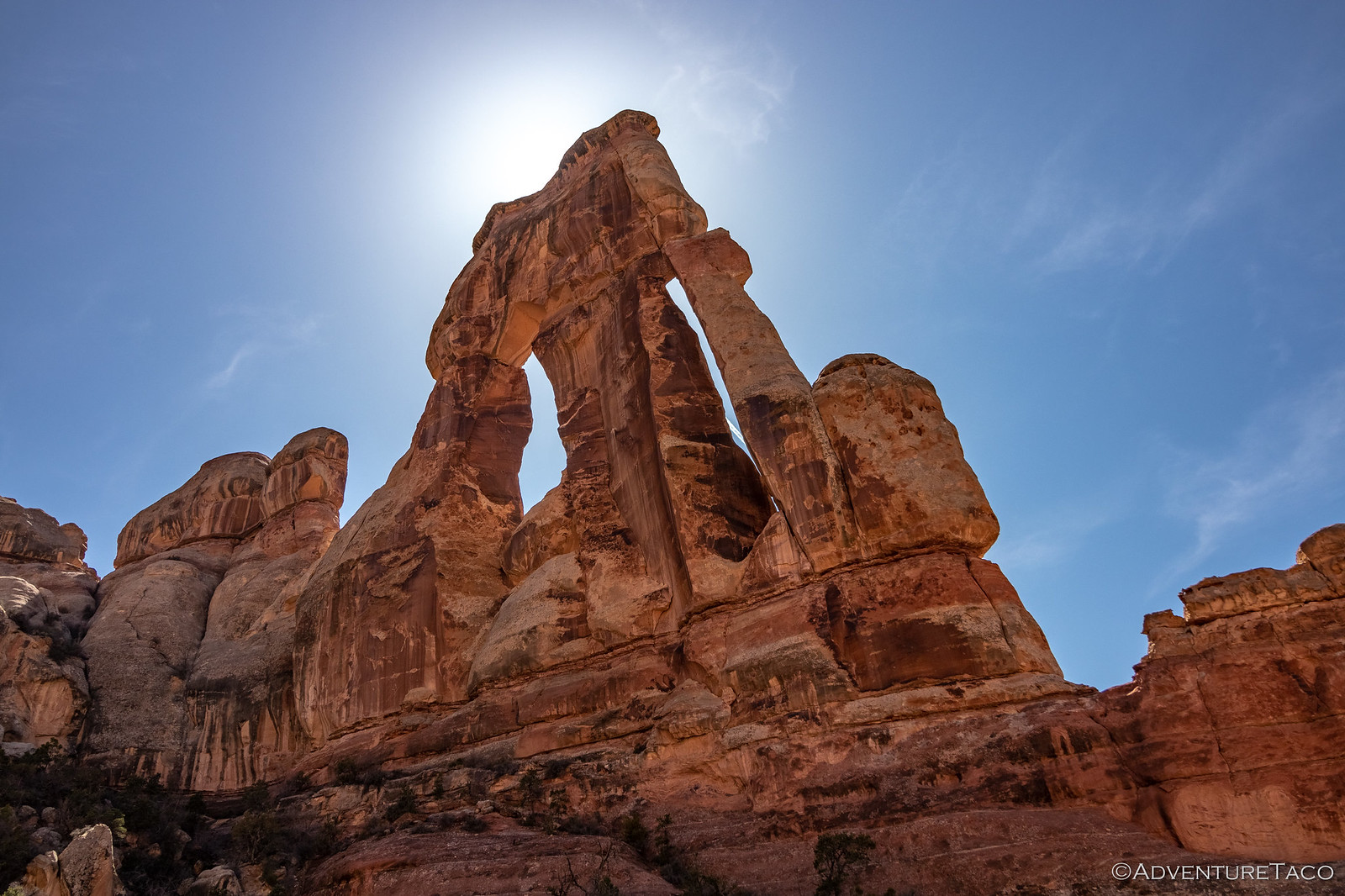 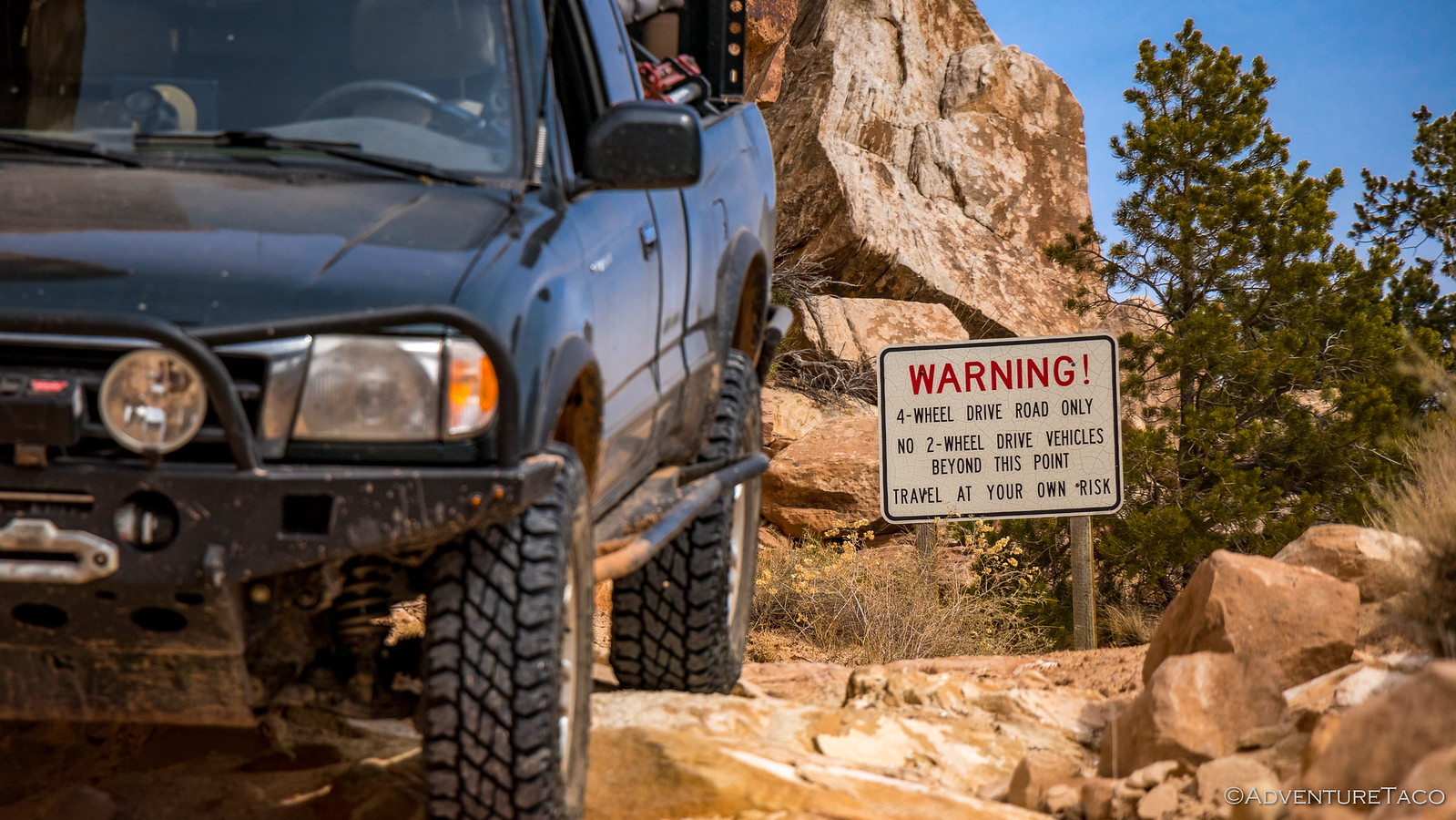 Ruining Around Utah 3 - Stymied by Snow in Beef Basin 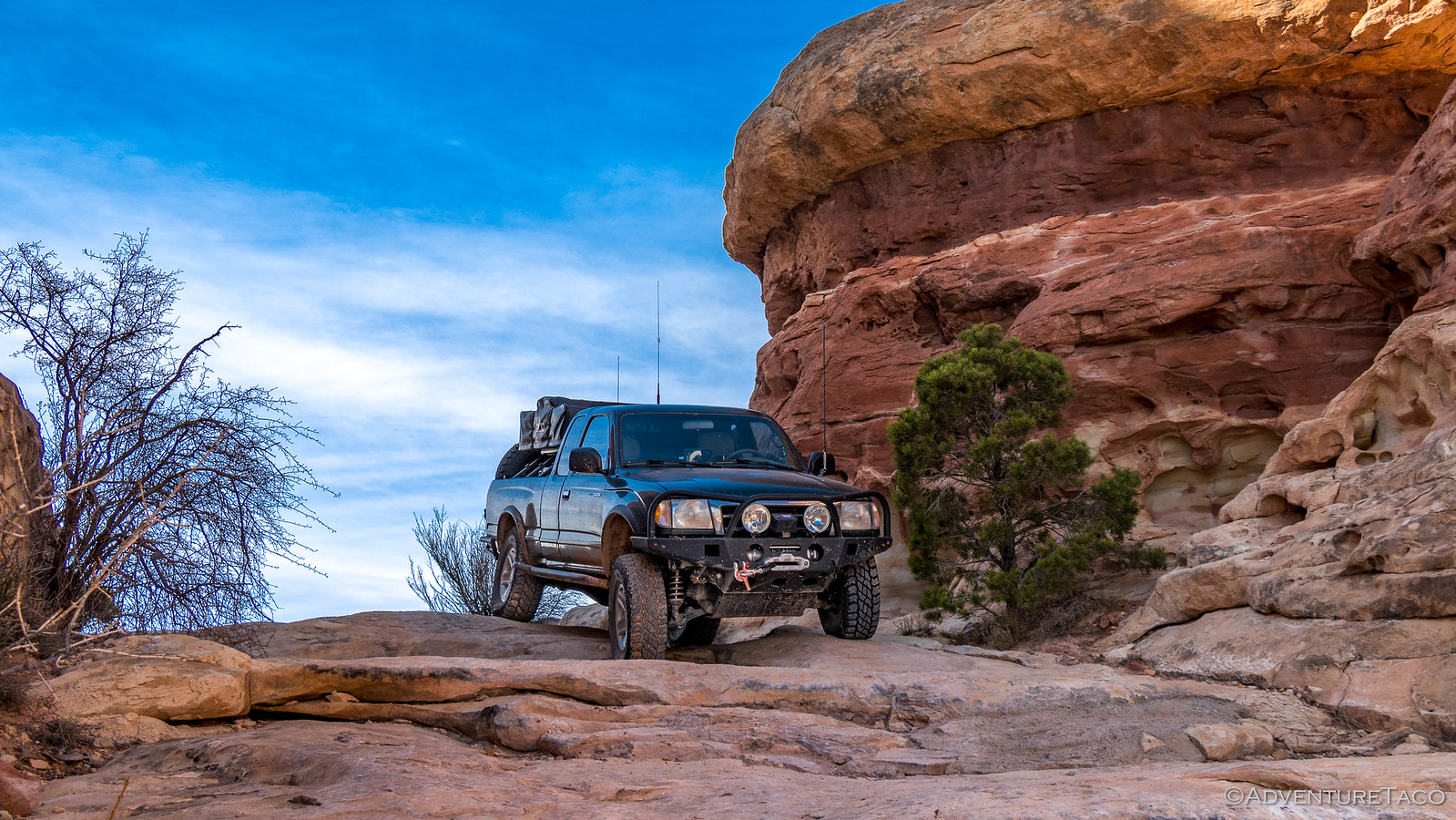 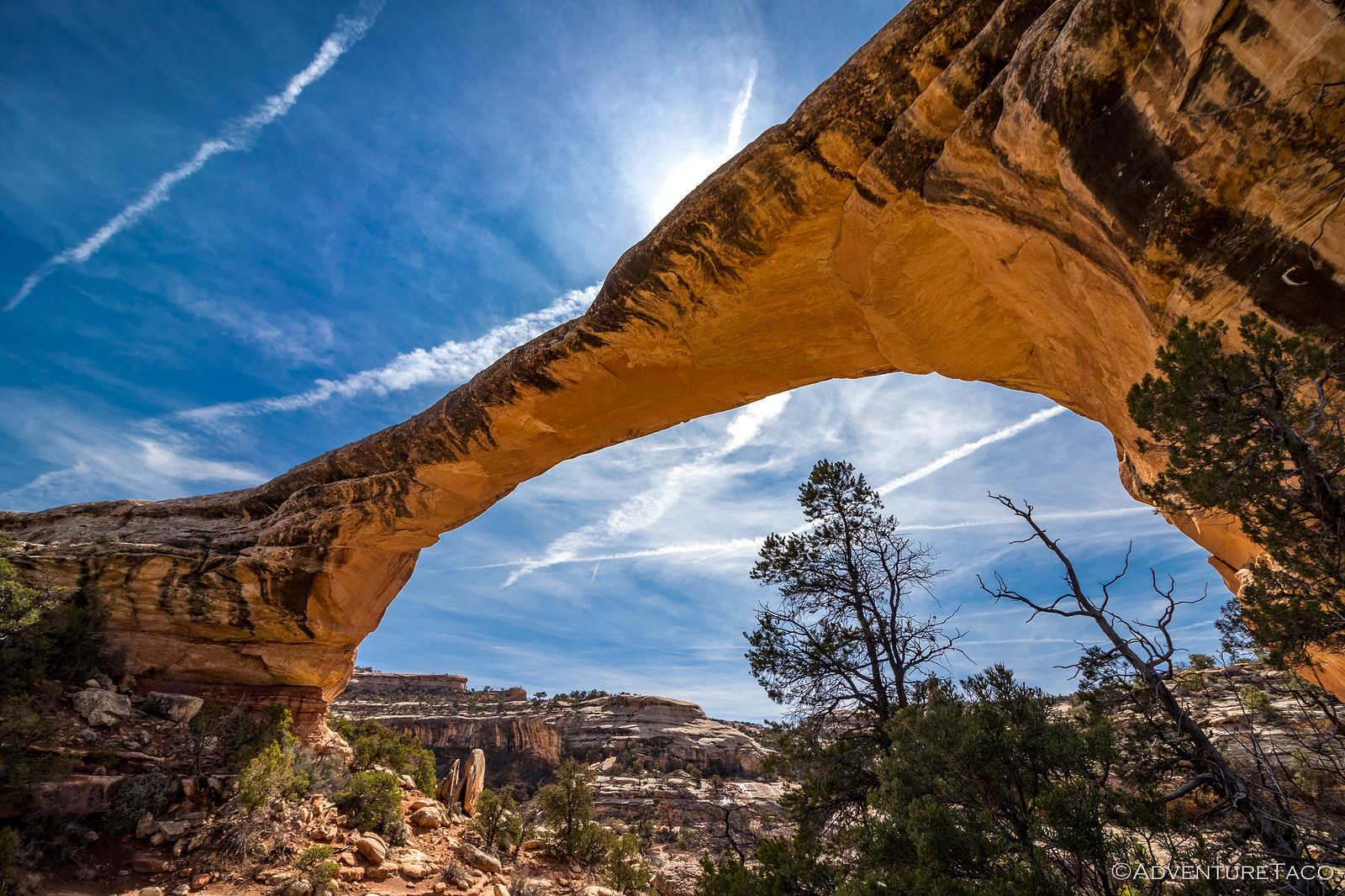 Ruining Around Utah 6 - Hite to Home