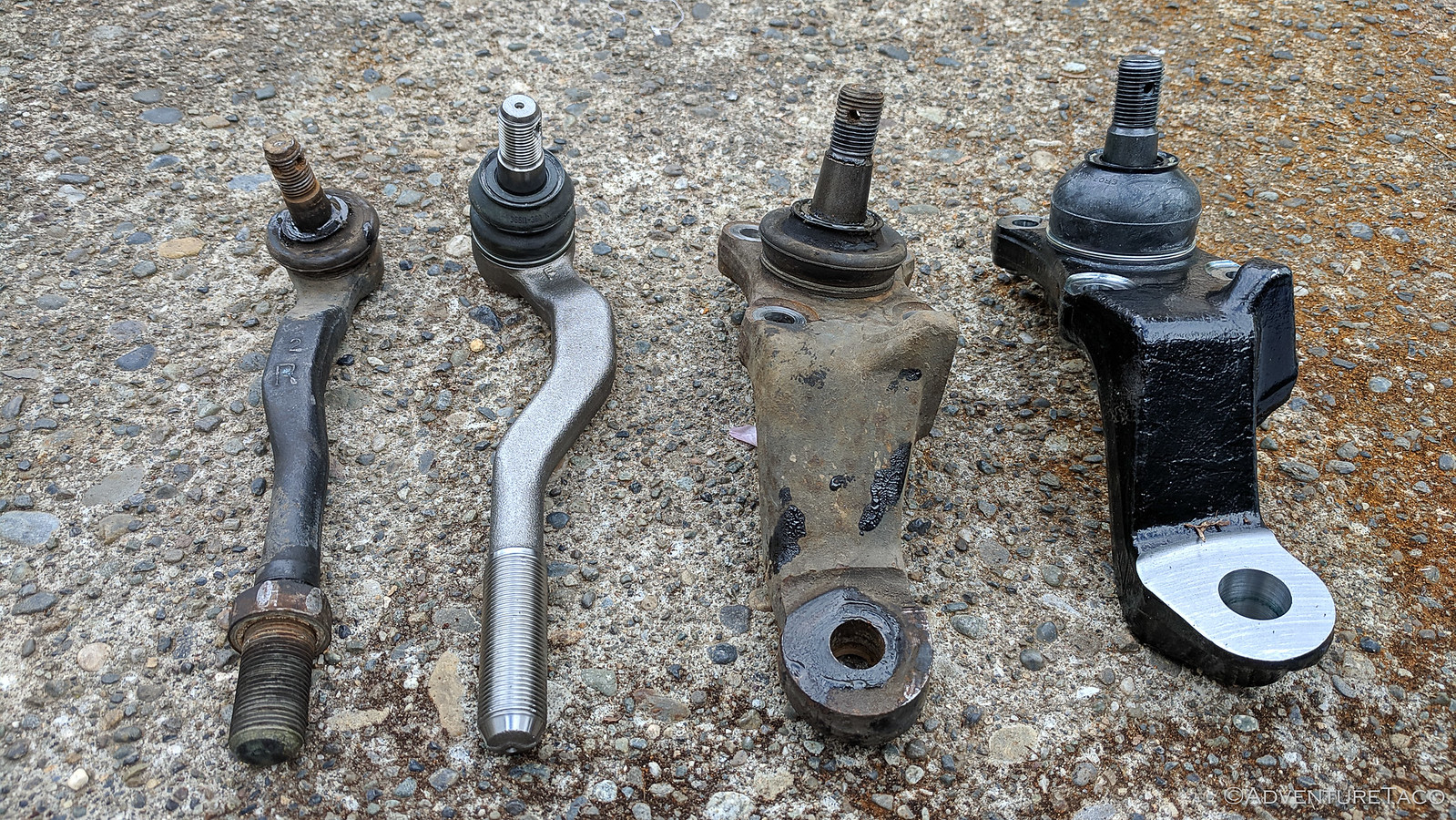 Slowly Turning the 4Runner into a Tacoma...New LBJs and OTREs

It's been a busy few weeks getting the 4Runner whipped into shape mechanically. As I've said before - I knew there were a few things to do when I bought it, and I felt like it was easily accounted for in the purchase price of the vehicle.

The last of those mechanical things was one that I wanted to do out of an abundance of caution - preemptively replace the lower ball joints (LBJs). These are a part that's known to fail - and catastrophically - on 3rd gen 4Runners, and since I had no idea when (or if) the previous owner last replaced them, I figured that it'd be good to get mine into a "known" state. 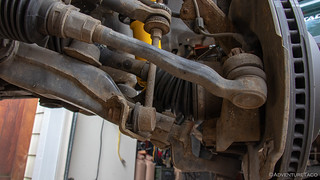 That, and I wanted to perform a little experiment - I wanted to install some 1st gen Tacoma LBJs on the 4Runner.

My answer would be twofold:

As one does - having already made the decision - I figured a bit of research was in order to try to understand if it would work. And - of course - I discovered that switching out to Tacoma LBJs wasn't a single-part swap, and that there could be a side effect.

Both seemed reasonable to me - after-all, new OTREs just meant a few more bucks into the bottomless black hole of truck costs, and the turning radius of the 4Runner is already so much better than the Tacoma that even if I lost a bit of radius, I'd still feel like it was amazing.

Everything arrived, and proceeded to gather dust for a month in the living room. Tough life when trips and adventures get in the way! 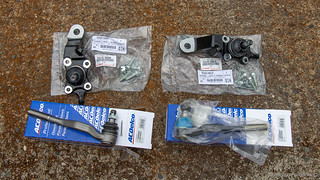 Now, an astute reader may notice a couple things in that photo. First, those specific LBJ part numbers do in fact come with new bolts. Second, that passenger (right) OTRE doesn't look like any 555 part I've ever seen. In fact, I'm told it's a Mevotech - which I've never heard of but is apparently reasonably high quality as well.

I contemplated and balanced my OCD of having two different OTREs on the 4Runner with the common sense knowledge that these parts would work just fine, and eventually decided to install everything and not go to the trouble of tracking down an actual 555 part to replace the Mevotech.

And with that, I gathered the necessary tools to do the job:

My first order of business after jacking up the truck and taking off the wheel, was to take a couple of measurements between stationary components on the truck and the dust shield - I knew I was going to need an alignment when this was all done, but I hoped I could get things "mostly" realigned by keeping the measurement consistent in the transition from old to new. 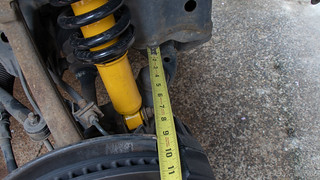 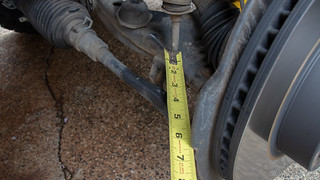 Then, it was time to get out my favorite tool in the shop - the Uga-Uga - a Milwaukee Mid-Torque Impact Wrench. This thing makes me feel young again it works so well, so I use it as much as I can. In this case, to remove the castle nut holding the OTRE and LBJ together. 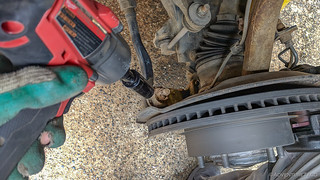 Next, the smaller Pittman Puller in the OTC 6295 Front End Service Set makes quick work of separating the OTRE and LBJ. A hint here for anyone who doesn't know - leave the castle nut loosely threaded onto the OTRE when you do this, and it will keep the joint from exploding when it's pressed out. 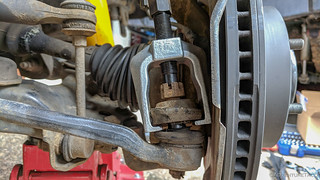 The final step in removing the OTRE is loosening the jam nut that secures it to the inner tie rod. This was by far the hardest part for me since I was unable to use the Uga-Uga - thereby making me feel each and every one of the years that constitute my age. I even had to resort to some penetrating fluid and a bit of heat; these were clearly on there too tight! 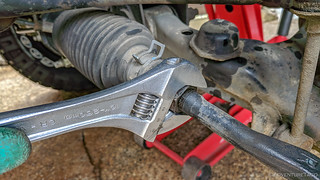 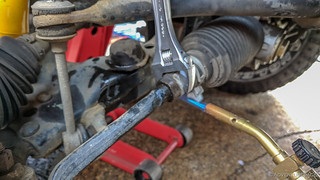 From there, the only thing left to do is remove the LBJ from the LCA. I started by removing the castle nut in the same was as I had the one on the OTRE - Uga-uga and then the larger Pittman Puller from the OTC kit. 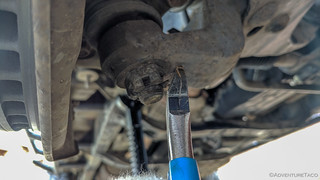 That leaves just the four, 14mm bolts to remove from the LBJ - assuming you still have all four, since they have been known to work their way out, a key component to failure! 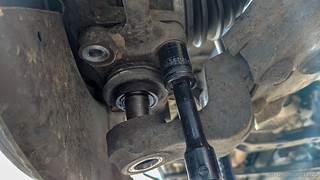 With everything apart, I was excited to take a look at the standard equipment from the 4Runner and compare it to that from the Tacoma. Would the Tacoma LBJs really be heftier than the 4Runner, or was it all just internet bunk? 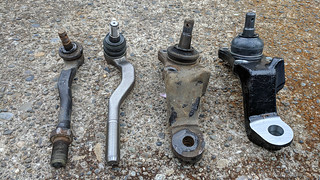 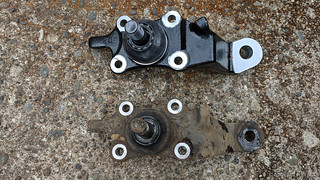 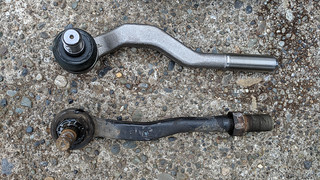 What you can see reasonably clearly - I believe - is that the ball joints in both 4Runner and Tacoma LBJs are the same! But, we can't bust the internet myth entirely - on close inspection, it's clear that the stud on the Tacoma OTRE that connects it to the LBJ is in fact bigger than it's 4Runner counterpart.

Assuming - as the internet tells us - that size does matter

, the Tacoma assembly may be slightly stronger, just not in a way that's likely to make much difference - since if the ball joint goes, I don't think any size OTRE connection is going to keep your wheel from eating your fender.

OK, from here, everything is reasonably straight-forward. And yes, I know it was up to this point as well - but there is one twist at this point - we'll get to that when installing the OTREs.

Start by installing the new Tacoma LBJs - they bolt right in using the new bolts. I also recommend just a bit of  blue Loctite (242), for good measure. Torque the four, 14mm bolts to 59 ft-lbs and the castle nut to 103 ft-lbs + any slight additional tightening necessary to insert the cotter pin (Note: these are Tacoma torque specs, since this is a Tacoma part). 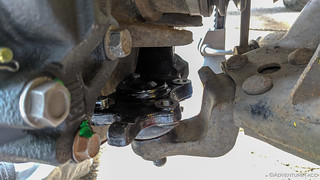 Now, it's time for the OTREs. The strange bit here is that in order to get them to fit without interfering - at all, as far as I can tell - with the sway bar links, is that you have to install them on the opposite side of the 4Runner than you do on the Tacoma. That is, what goes on the driver side of the Taco goes on the passenger side of the Runner.

It's weird, yes. But it works. And I've learned not to argue when it works. 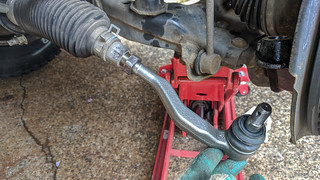 Get the OTRE threaded in until your measurements to the dust shield match those that you got before anything was disassembled. They'll never match exactly, but if you're close enough, it'll be fine to get to the alignment shop. Toque the castle nut to 67 ft-lbs and the jam nut "good and tight, but not so tight that the next guy will need a torch."

Trust me on that one, too tight makes a guy feel weak. I mean, that's what I've heard anyway.

With that - well, and re-installation of the wheel (89 ft-lbs on those lug nuts) - I was done! My 4Runner had new parts and I now had the comfort of knowing that even more of the two trucks were the same - one less thing for me to remember when I go to order parts in the future!