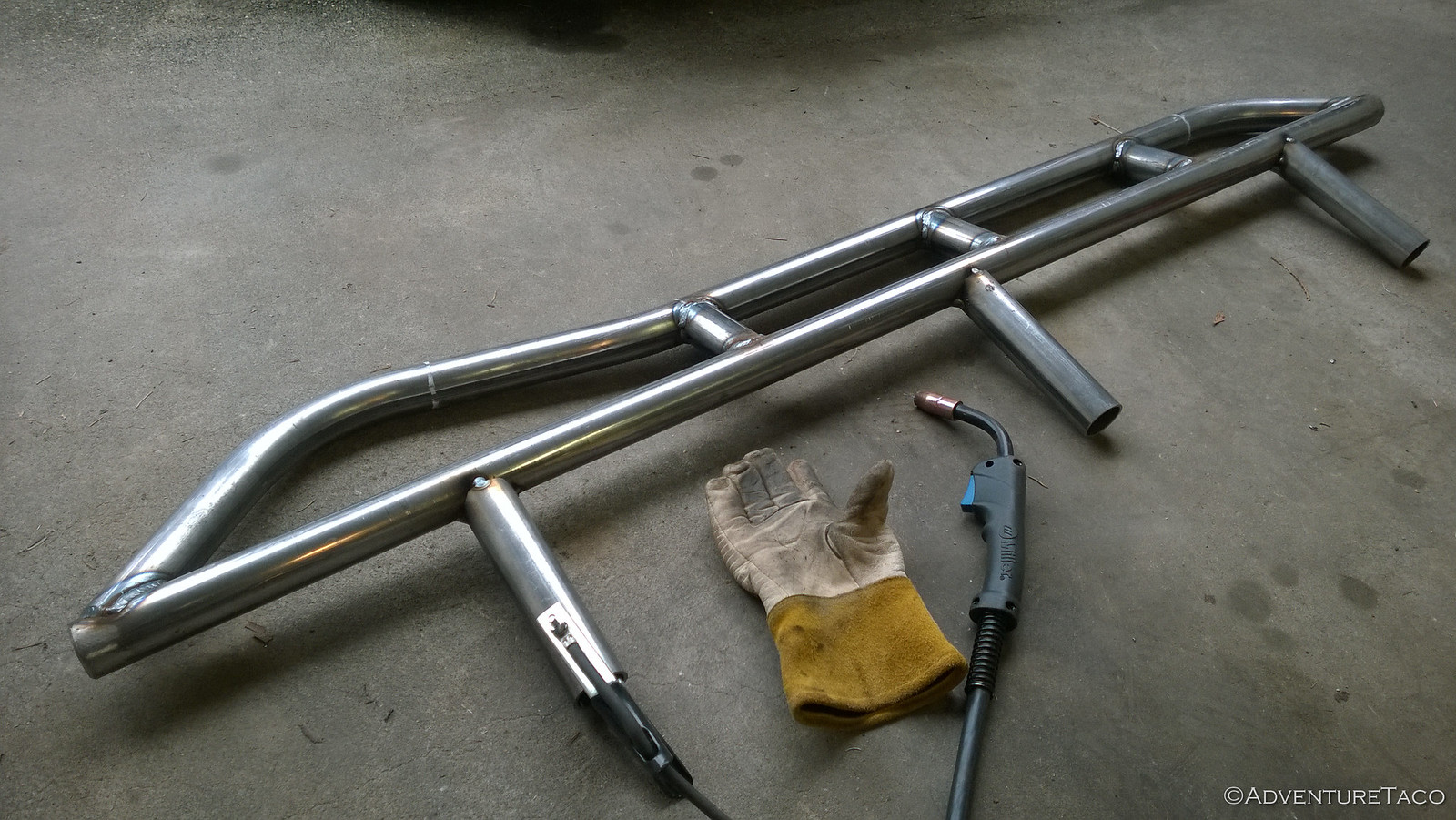 Fabricating Sliders for the 4Runner

With winter here and therefore the weather a bit crappier, it's a generally a good time to take stock of the truck and perform the maintenance and modifications that will keep it going strong for another year. This year however is a little different - there's not just one vehicle that needs attention - there are two!

In fact, the still relatively new-to-us 4Runner might even be the more important vehicle to get right, since it'll be the one we take when we venture out with @mini.turbodb.

There are only a few things on tap for the 4Runner since it won't be our extreme #instaexpedition mobile, and the first of those things is one I'm not sure we'll really ever use for their intended purpose: sliders. However, we (and especially the little one) will use them all the time for convenience of getting in-and-out of the truck, and if we're going to have "steps," they are going to be functional (damn it!)

At any rate, I'd picked up a weld-yourself kit of steel pipes and plates way back at the beginning of November 2018 (gasp, two months earlier) and I figured that a rainy day was as good as any to get them positioned, welded up, and installed.

Of course, I was getting ahead of myself and overestimating the amount of work I could do in a day - nothing new, for sure.

I got started by forgetting to take any photos of figuring out the position of the sliders on the side of the 4Runner - a big part of the reason you're reading all this text.  See - most of the pieces just weld together, but I had to figure out how far out from the frame I wanted the sliders to sit.

I knew I wanted them closer in (tighter) than on the Tacoma, but I still wanted them protruding enough to be used as steps, and platforms for accessing anything stored on the roof. At any rate, I eventually figured out the necessary length for the legs and got to cutting. 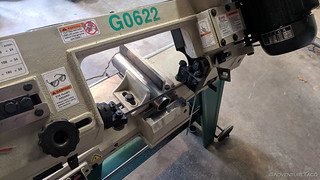 Patting myself on the back for remembering to take a single photo of perhaps the most boring part of the build, I promptly forgot to take photos again, and got to tacking and welding the various pieces of the sliders together. It was only when I got to the part of welding the legs onto the main slider that I realized - oh right, my camera is sitting over there for a reason.

Luckily, this was an interesting part of the build, so I proceeded to take a crappy photo showing how I used a couple of triangular blocks of wood to hold the slider in the right position to weld on the legs - the welding table serving as a plane to keep them all perfectly aligned. 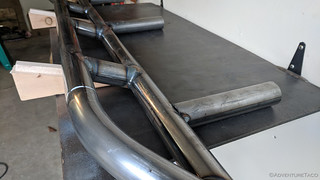 That worked well, and I proceeded to tack each leg in four places (at 90º's to each other) so that as I fully welded the leg, I wouldn't get any deformation in one direction or another. Then I moved the sliders to the ground and proceeded to continue welding. Once again, picture-less. 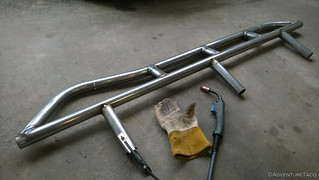 With the legs secured, the next order of business was positioning the frame plates - a task that required careful balancing and alignment - so I fetched @mrs.turbodb to hold the slider while I once again tacked everything in place. 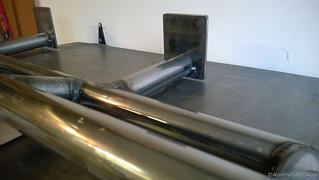 Further welding ensued and as is often the case, it wasn't until I had only 3" of weld remaining when my spool of welding wire ran out. Luckily I'd purchased an extra spool and so it was a quick change to get up and running again - much nicer than having to run to the store, or order something online!

In no time, the sliders were completely welded and to my surprise, they looked decent. I mean, there might still be a couple little blobs of pigeon poop on a couple joints, but many of them look like they were done by someone with eyesight. And, even better - all the bits that are supposed to line up, and be planar with each other, are!

It's a miracle really, I'd say. 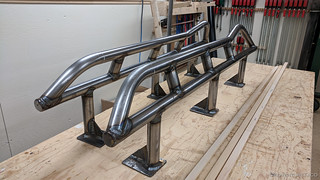 Of course, by now it was starting to get dark and it was clear that there was no possible way I was going to get these things primed, painted dried, and welded to the 4Runner in the 39ºF rainy weather (perhaps I was just a tad optimistic with what I could accomplish earlier in the day) so I decided this would be a good place to stop for the day.

Plus, it would let me stew on a decision I'd been avoiding: spray paint or powder coat?

I knew I wanted powder coat - not for the bottom of the sliders, those will get chewed up by rocks over time no matter what, but it'd be nice to have the tops powder coated so that as people step in-and-out of the truck, their feet don't wear off the paint - which would surely happen with spray paint. But powder coat here is expensive. The cheapest of the three quotes I'd gotten was $300 - significantly more than I'd paid for the kit in the first place, and of course nearly $300 more than spraying them myself.

But then, as I was resigning myself to a life of re-spraying the sliders where foot traffic wore off the paint, I got one more lead on a reasonably-priced, quality powder coater - Carl, of Carl's Powder Coating. He was awesome, coming in at less-than-half of the next highest bid and so I arranged to take the sliders his direction at a time convenient for both of us.

It wasn't for a couple months that I could get back out to Carl's - the tough life of trips and whatnot getting in the way. But when I finally did in early April, I couldn't have been happier with the result. He'd clearly done good prep and the result was fantastic. And now, I was finally ready to install the sliders on the 4Runner. 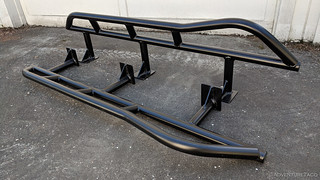 First, I positioned them. I knew that I'd have to do this a couple times, since I wanted them relatively tight to the body - this first positioning allowing me to mark the body pinch weld so I could notch it where the slider legs would connect the frame and slider rails. I found that fully bending the pinch weld where I'd notched it was easiest done with a 2x4 stood on-end, on my floor jack, essentially pressing the pinched steel up into the body of the 4Runner. 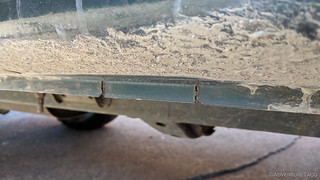 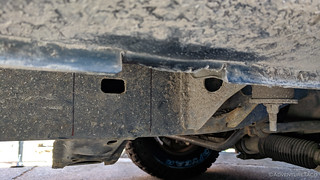 Pinch weld taken care of, the sliders went back into place and I prepped the frame and tacked them in several places. I wanted to make sure that they'd clear everything (doors opening and closing, etc.) before fully welding them on. To my amazement, I'd seemed to have measured correctly and they fit just fine - enough, but not too much room between the sliders and the body, and the bottom of the doors. We all get lucky sometimes. 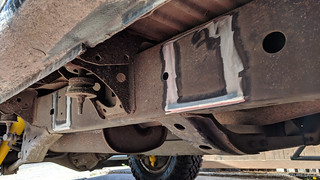 With everything seemingly right, I finished welding - which, by the way, I really don't enjoy downhill mig - I much prefer uphill and once again got everything cleaned up before spraying any remaining raw metal with a bit of paint. 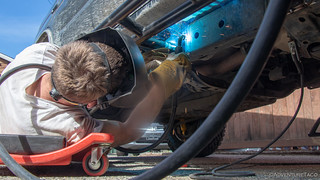 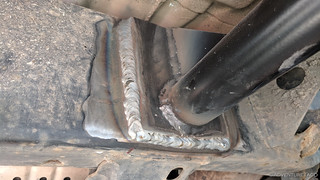 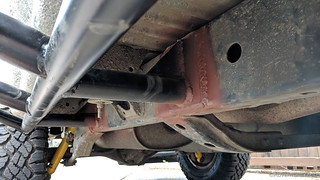 And with that, we had sliders. Or steps, if we're being honest with ourselves. 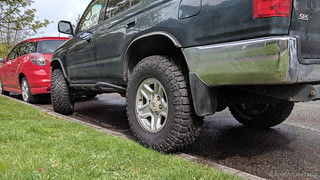