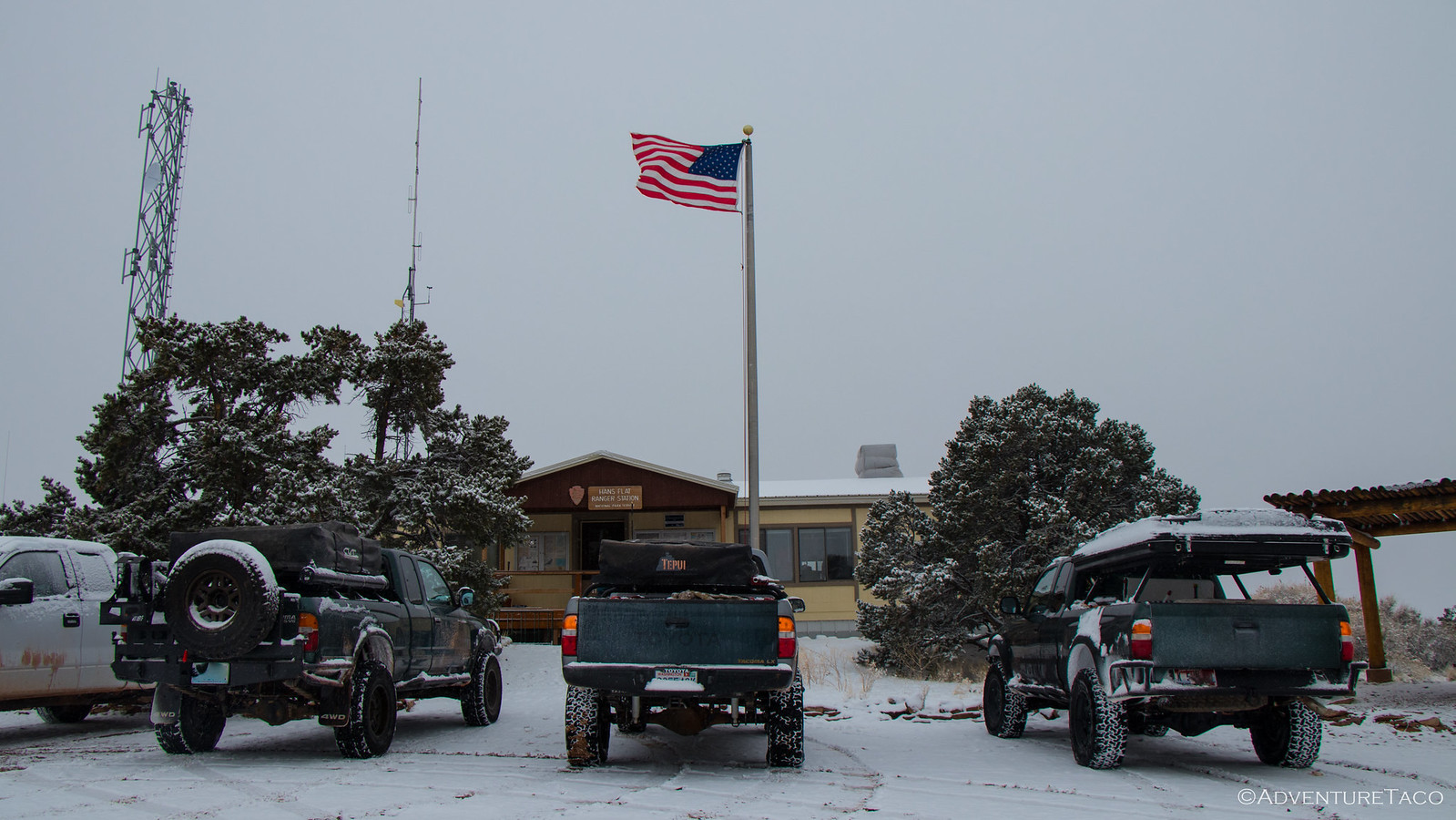 To say it was one of the more blustery nights we've spent in the tent would be an understatement. Perched on the edge of the canyon wall, the rain fly was getting whipped around, and the tent was acting like a sail in the bed of the truck - shaking the entire truck to and fro.

@mrs.turbodb asked if there was any chance we might roll backwards.

"Not really," I said. (and then I proceeded to put my clothes back on and get out to chock the tires - you know, "just in case."

We slept soundly until 4:00am or so - the wind picking up and dropping off through the night, but not a worry since the truck wasn't going anywhere. But, in those early morning hours, we started to feel moisture in the air - blown in through the screens covering tent doors and windows, which we always leave open for ventilation.

No problem - we just zipped everything up and went right back to sleep - unaware that a Winter Weather Advisory was being issued just as we were nodding off. 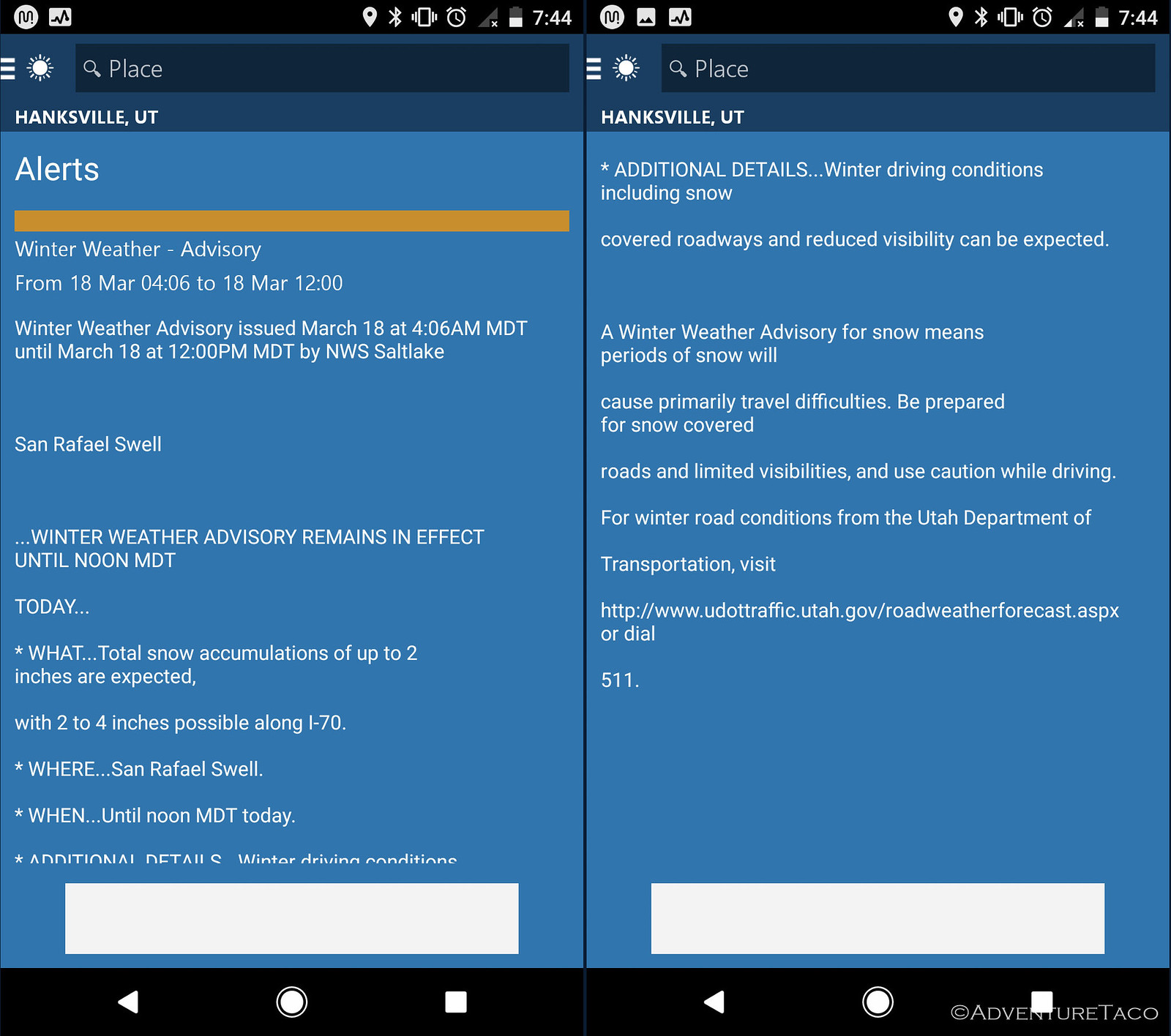 As usual, my alarm went off at 6:30am, so I could get up and enjoy the sunrise. It was still windy when I woke up to wind buffeting the tent - a good sign in my mind since that would dry off any moisture from the night before. Unfortunately, as I poked my head out the tent, I noticed that not only was it windy, but there was just a bit of snow falling - a sure sign that there'd be no sunrise to capture. "Oh well, I thought - I got a couple good ones already this trip, I'll get another hour or so of sleep and hopefully the snow will have stopped when we get up." 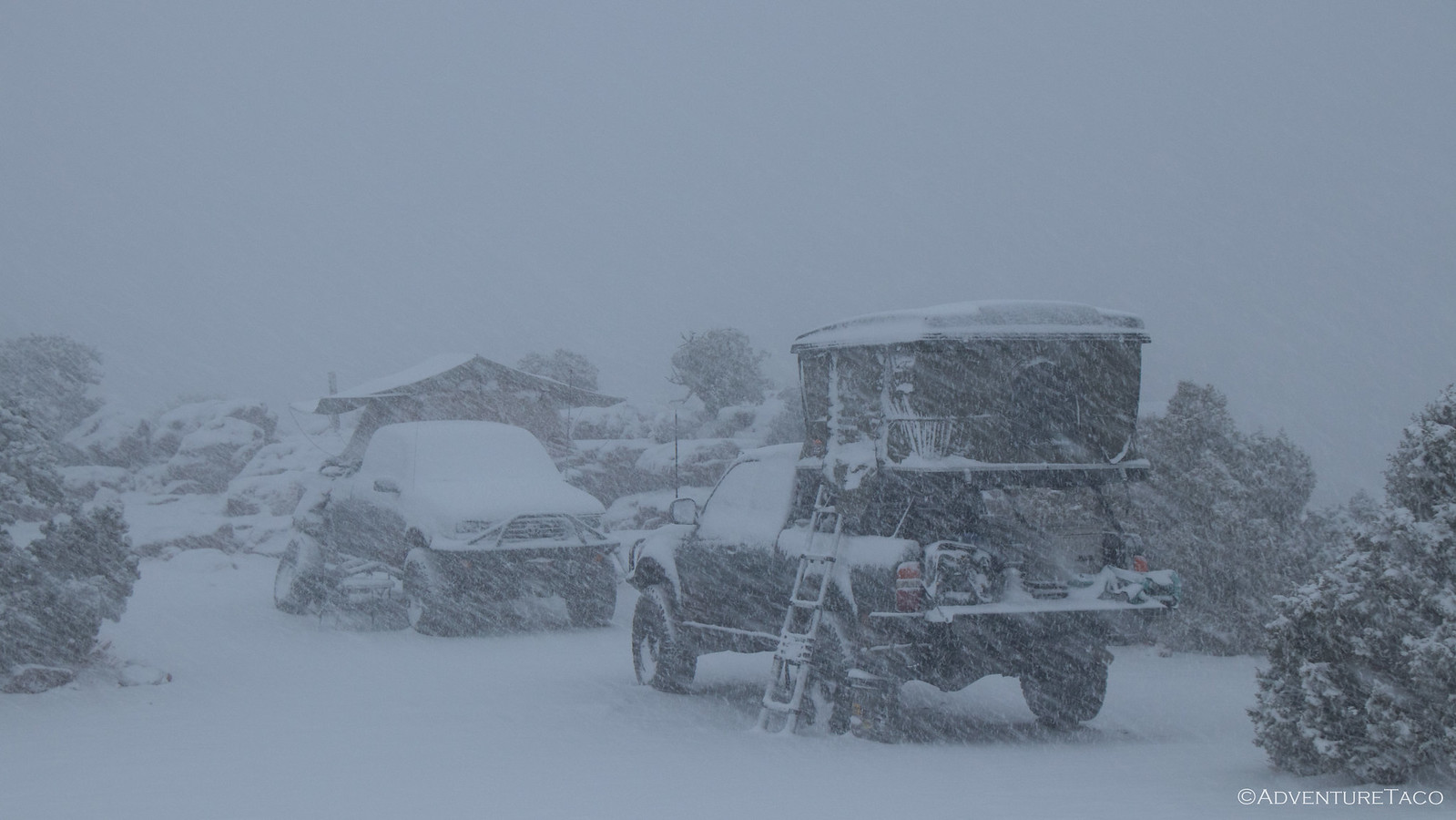 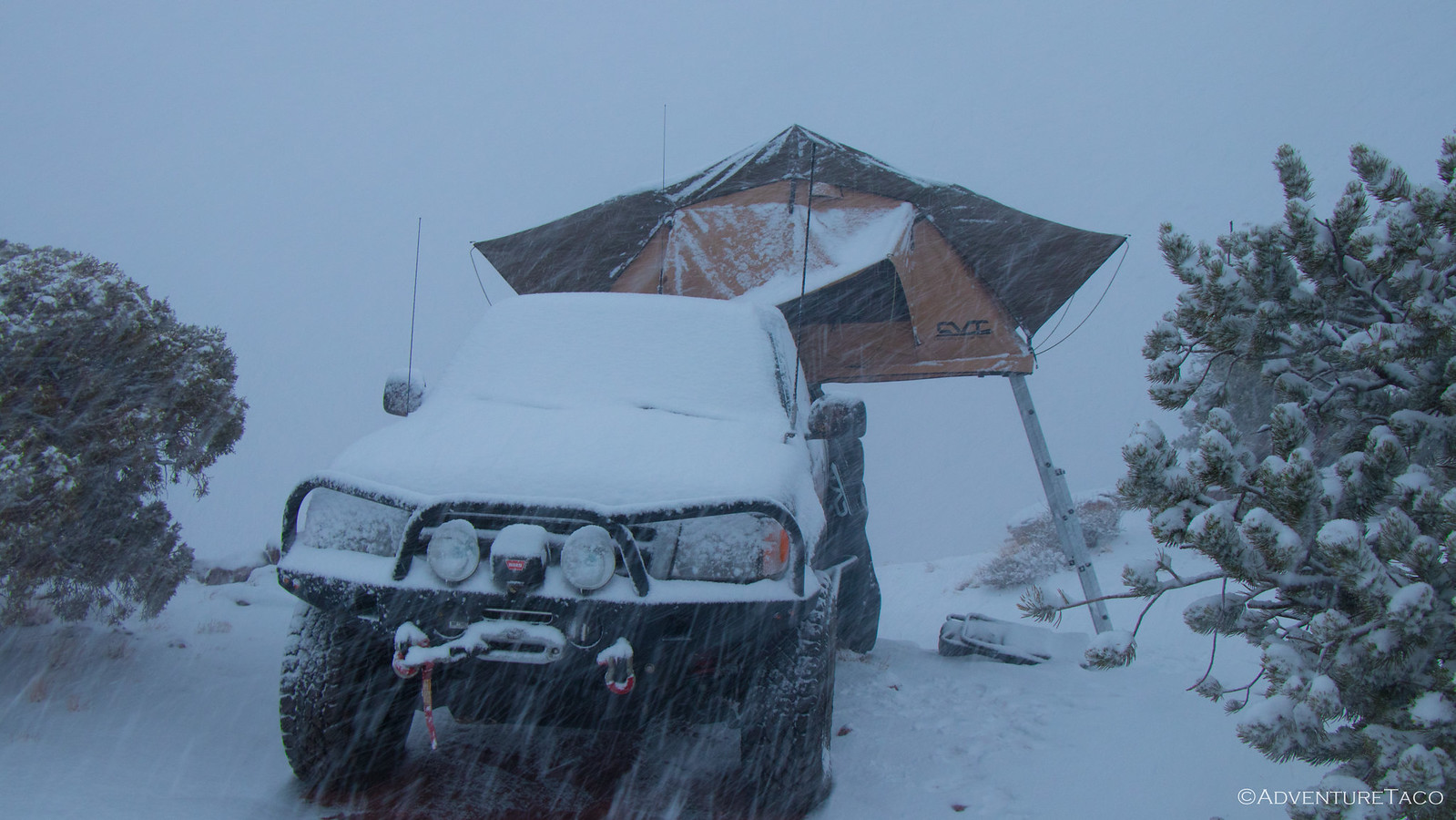 Not only had the snow not stopped when I woke up again at 7:30am, but conditions outside had become white-out-blizzardy conditions. We had a quick conversation about our plan of attack, and it went something like this:

Within minutes of my getting up, Ben was also up and out of his tent - having gone through a similar morning experience and realizing that it hadn't worked out the way he'd expected, either. We had a quick pow-wow and decided that our plan of attack would be "get out of there as quickly as possible." He roused Kirsten and Zane, and we all set about tearing down camp, and then tearing out of camp so we wouldn't be stuck in The Maze. 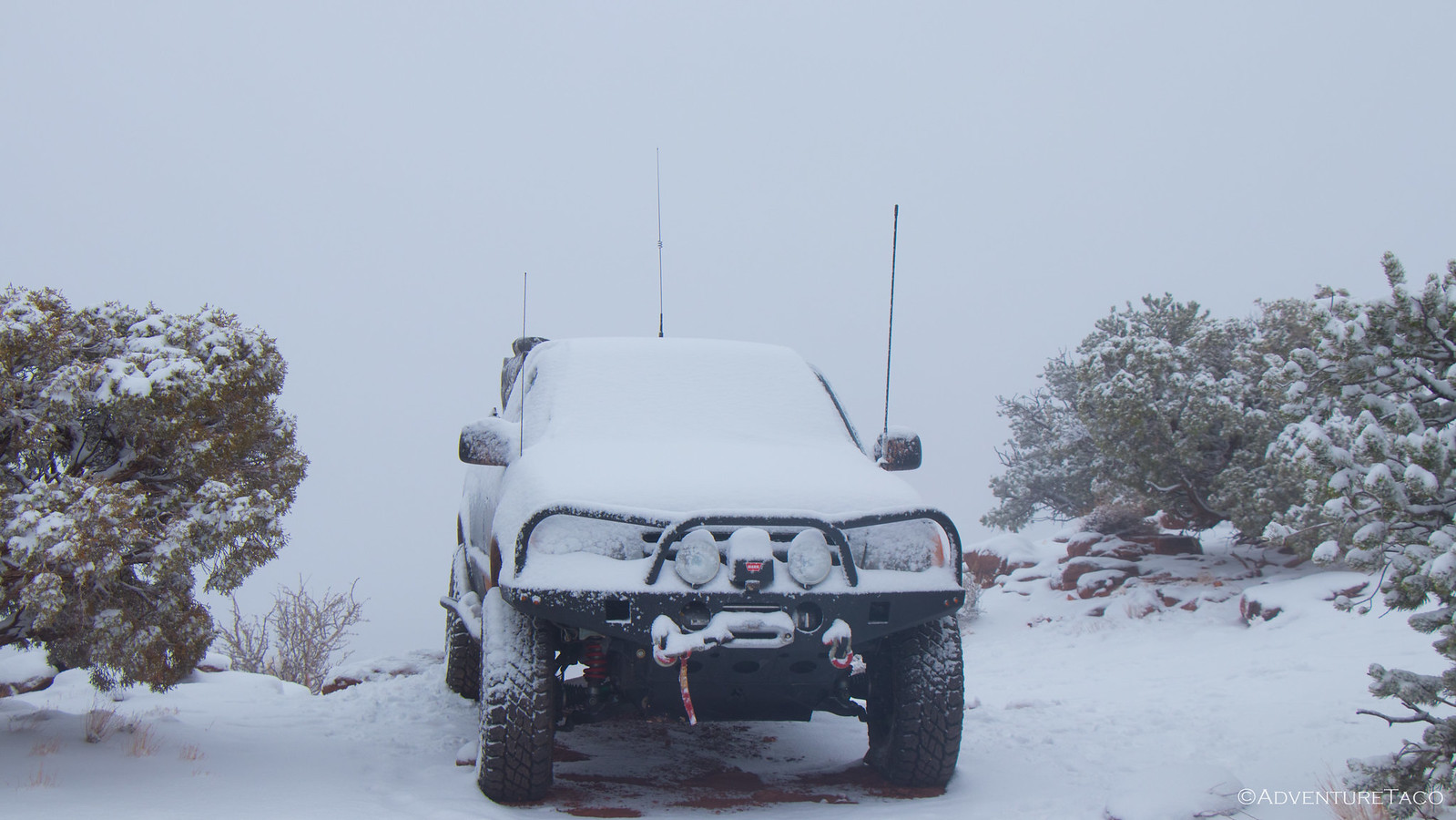 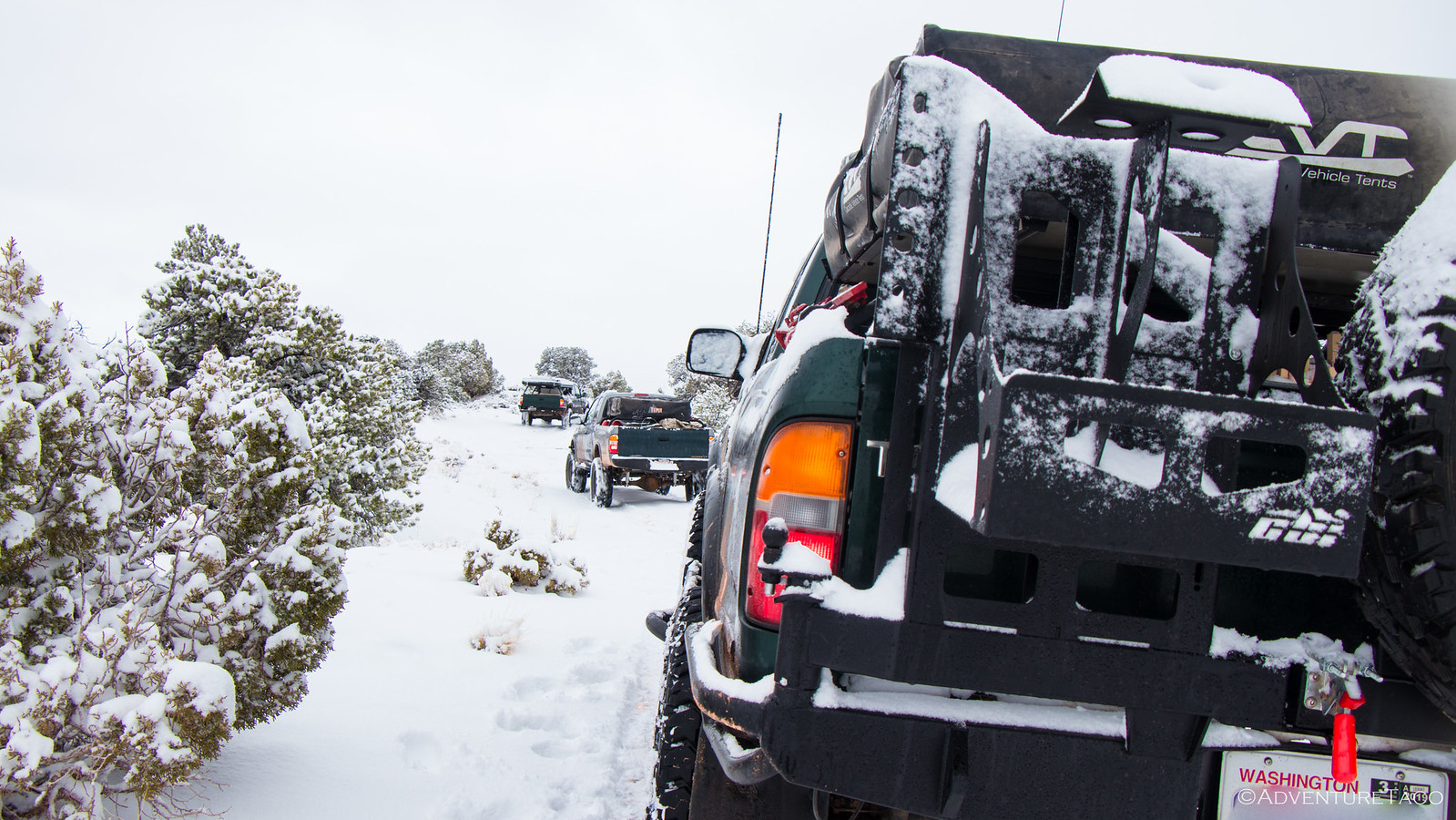 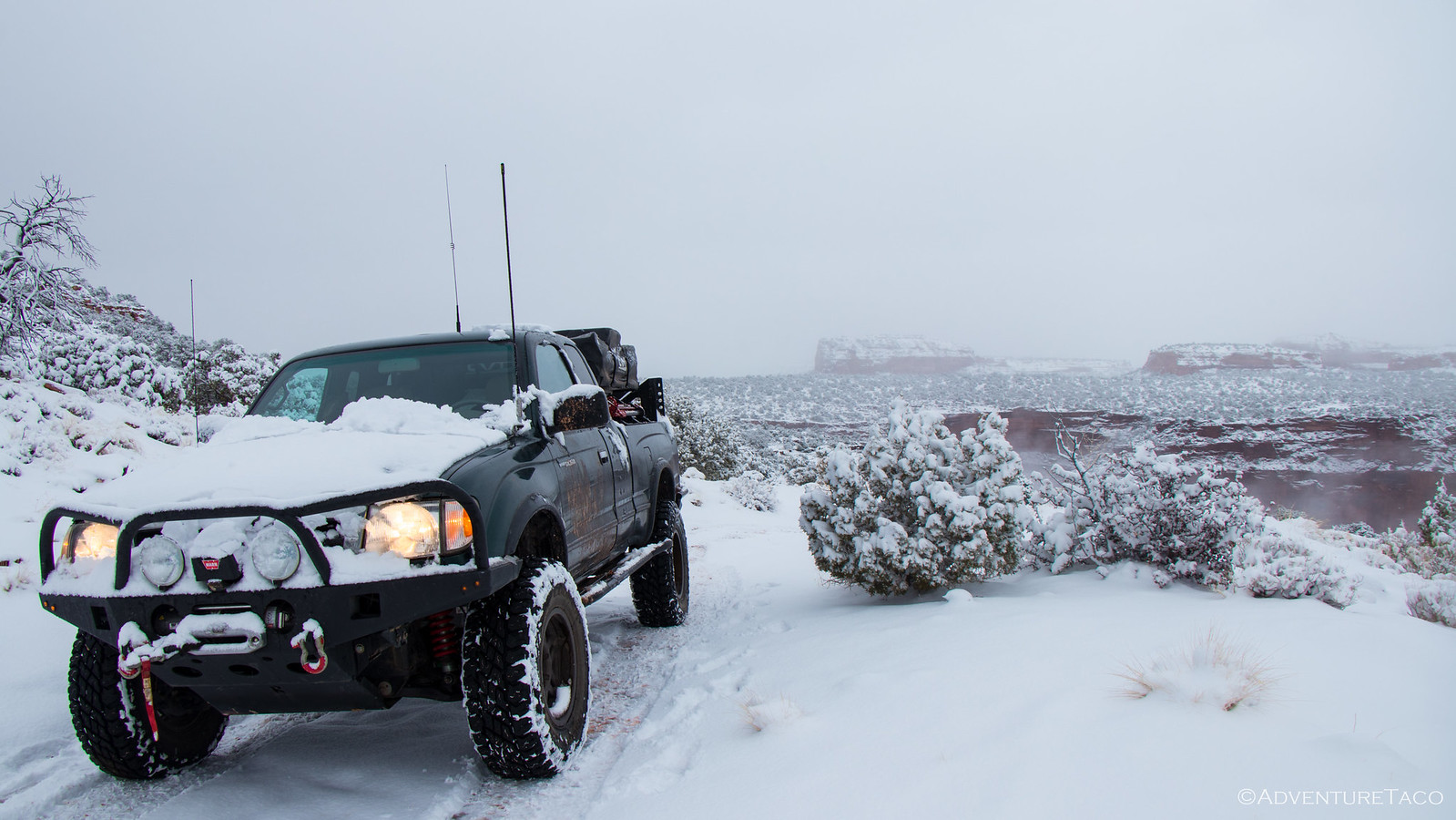 Having gotten about 4-inches of snow (in a little over an hour), we were happy to be an a relatively easy road. It's not that there weren't rocky inclines to maneuver, but there were no Flint Trail switchbacks, or Doll House overhangs to contend with. We made good progress with judicious use of the skinny pedal and within about an hour made it to the Han's Flat ranger station. 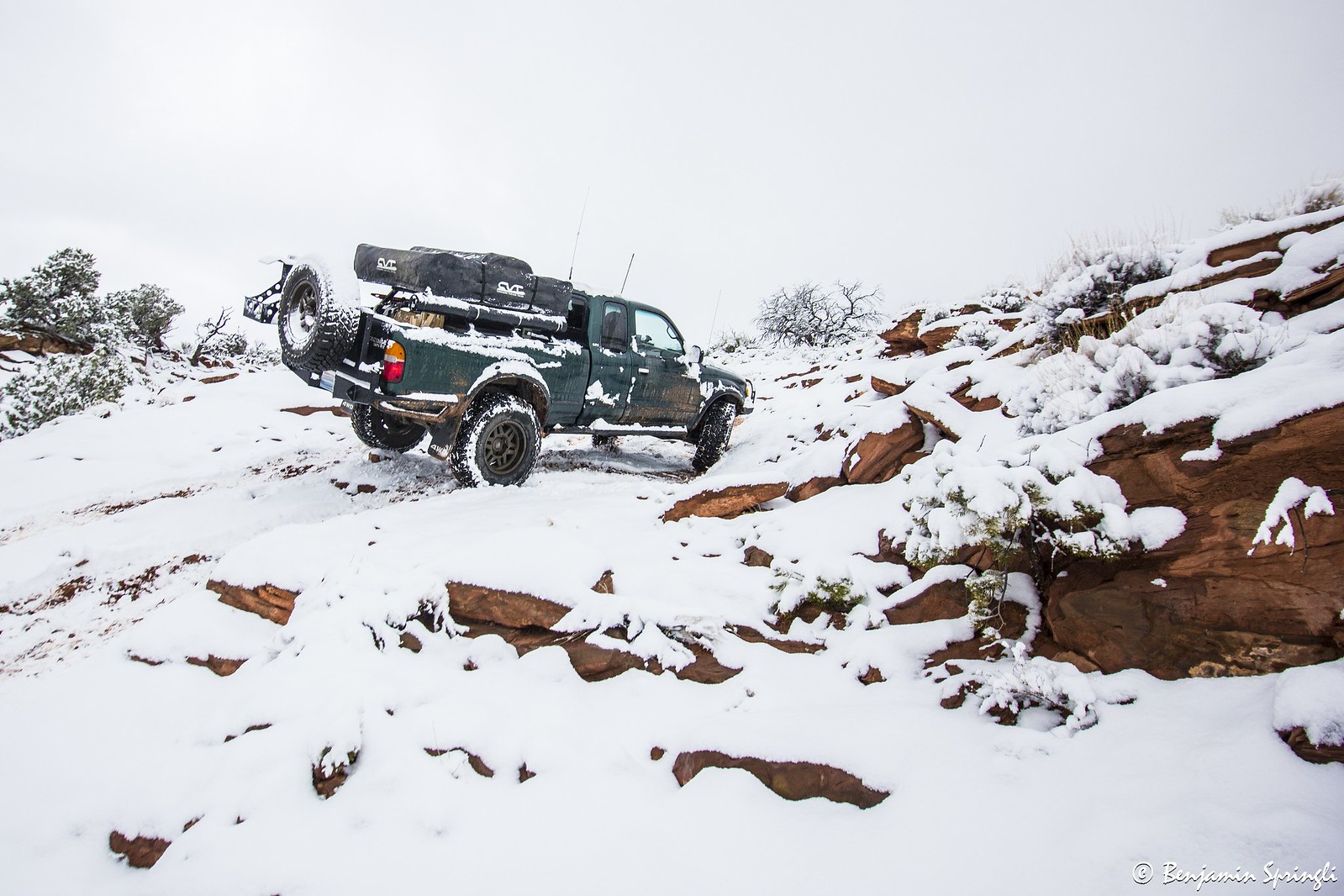 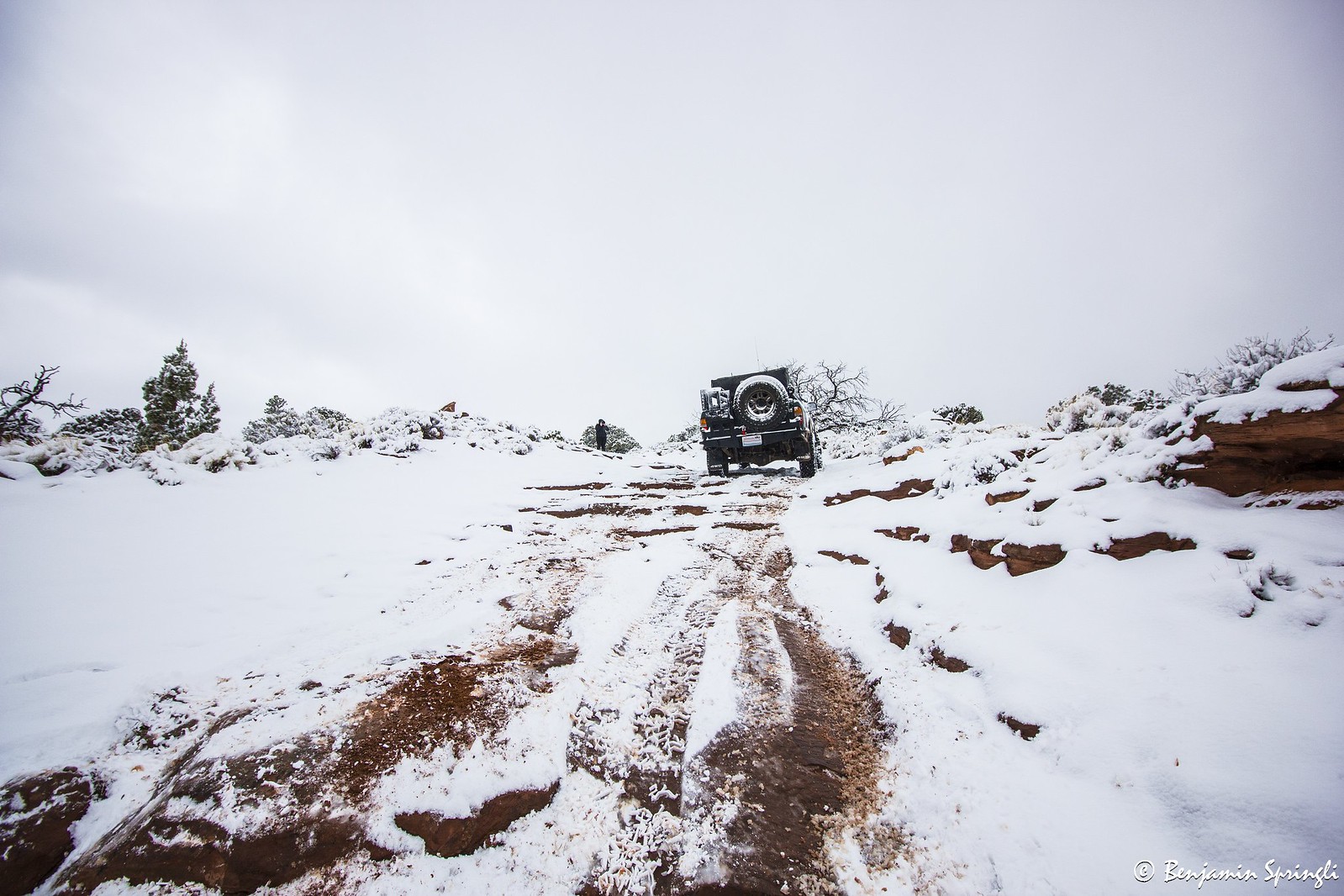 To say that the good folks at the ranger station were surprised to see us would be an understatement. To see a convoy of three first-gen Tacoma's roll in is always impressive, but to see it in a morning of surprise snow was clearly going to be the highlight of their day.

We chatted for a few minutes to confirm the condition of the road between Han's Flat and the town of Green River (our escape route), and were assured that it was not only passable, but probably one of the best maintained roads we could hope for. In fact, it was essentially the only road that they considered passable according to their road condition board. 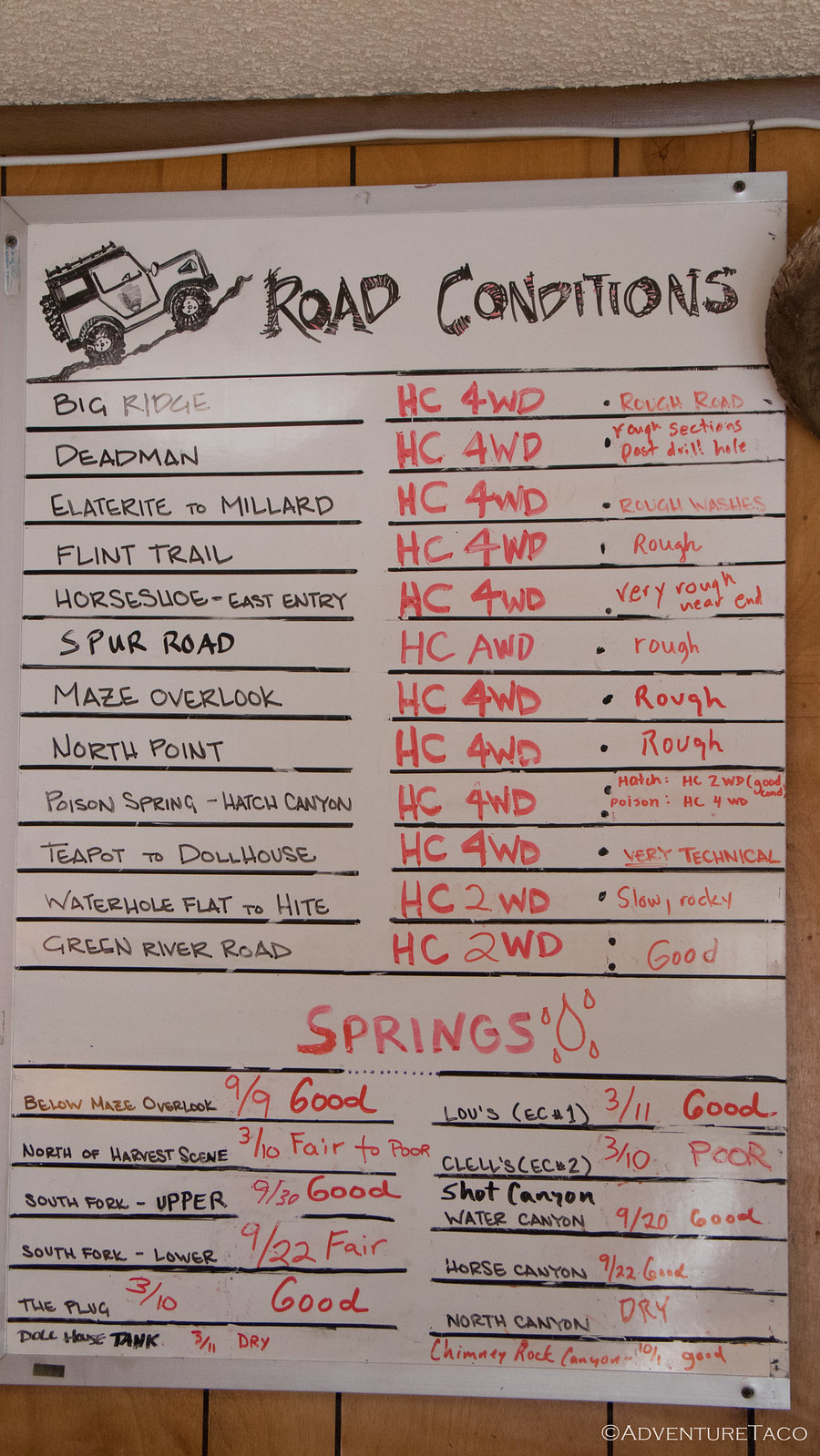 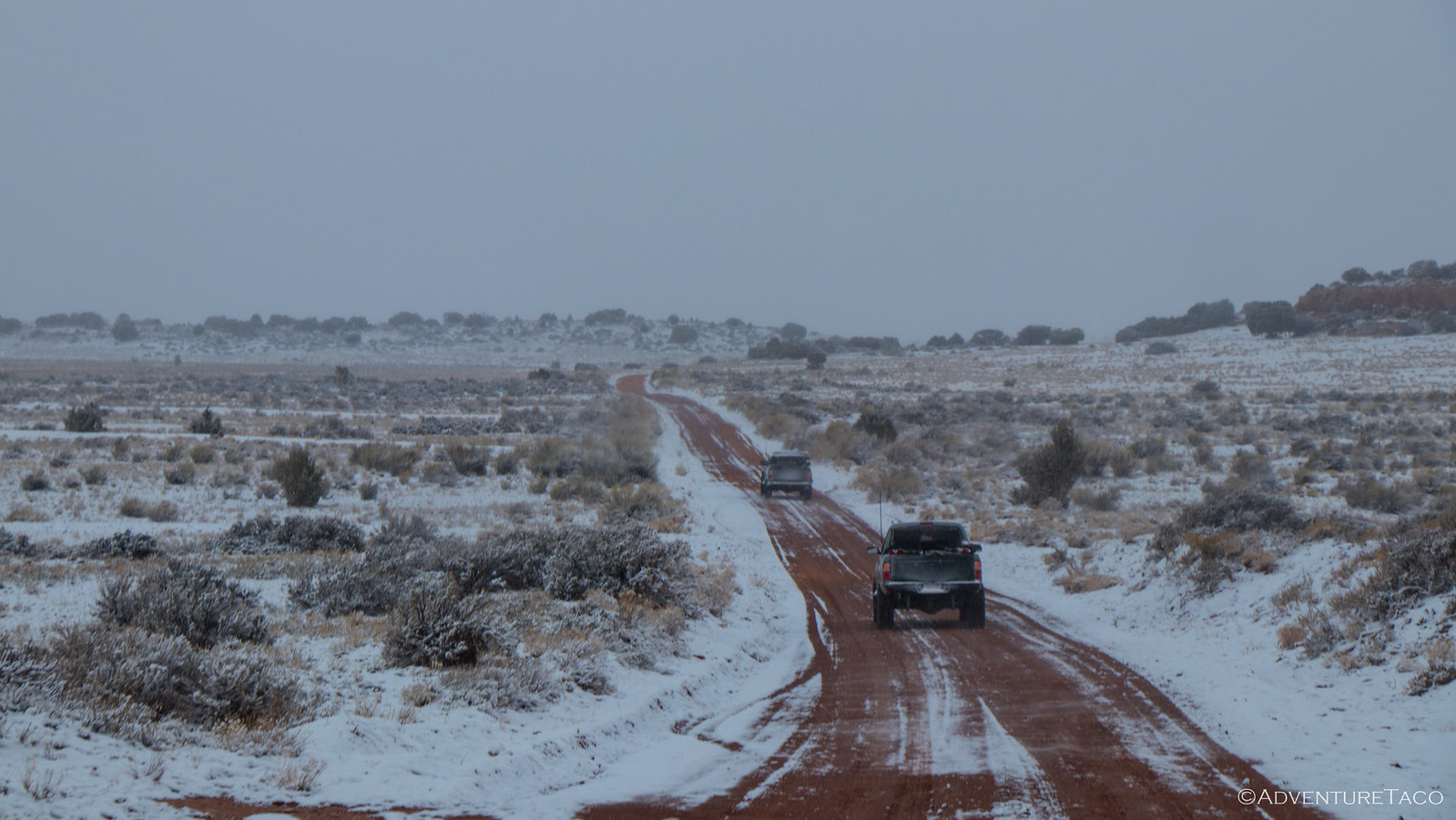 A quick bathroom pit stop and we were off - the road was in fact in relatively good condition - headed north to Green River, where the plan was to fuel up for the first time in three days. Looking at the GPS track and our gas gauges, it was clear that if we were going to make it, Zane and I were going to be mere feet-from-empty (Ben had added 5 gallons the morning before), so we decided that it'd be wise to put in a few gallons of gas to tide us over. 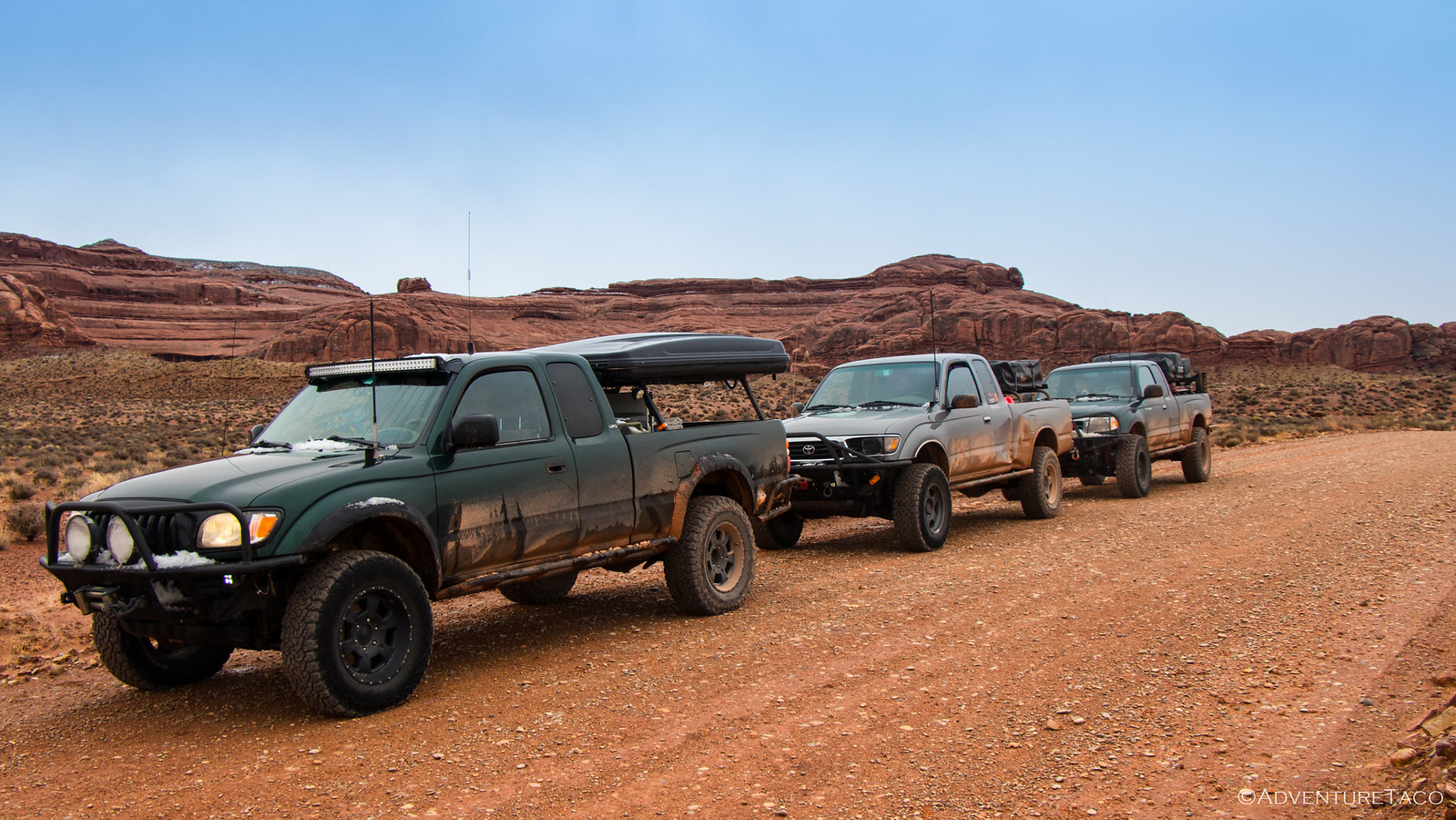 As we drove north, the snow stopped and gave way to rain - and mud - on the road. These things are fun, and we each did a bit of slipping and sliding around; caking mud on our trucks that would surely come back to haunt us when it dried. 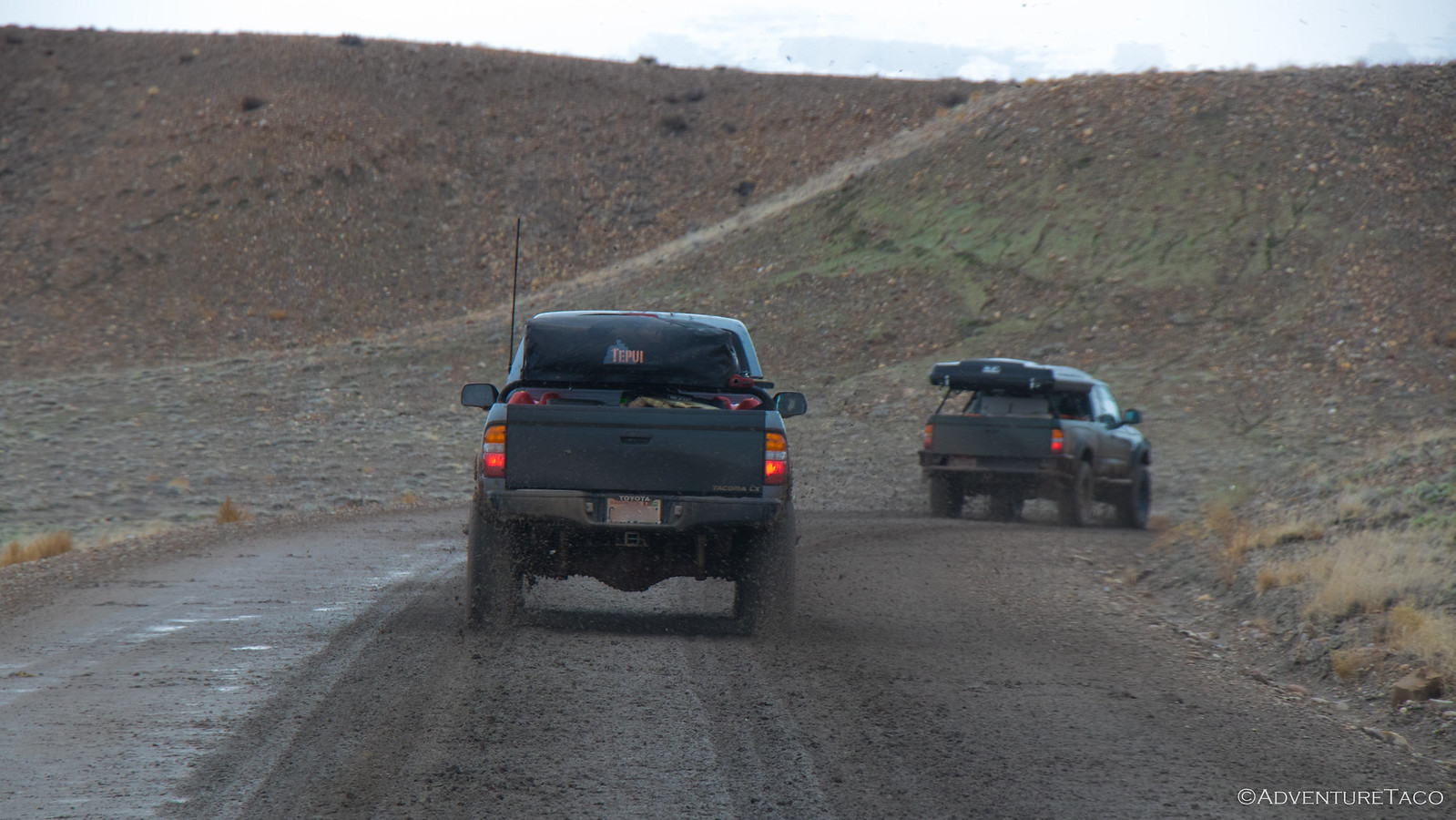 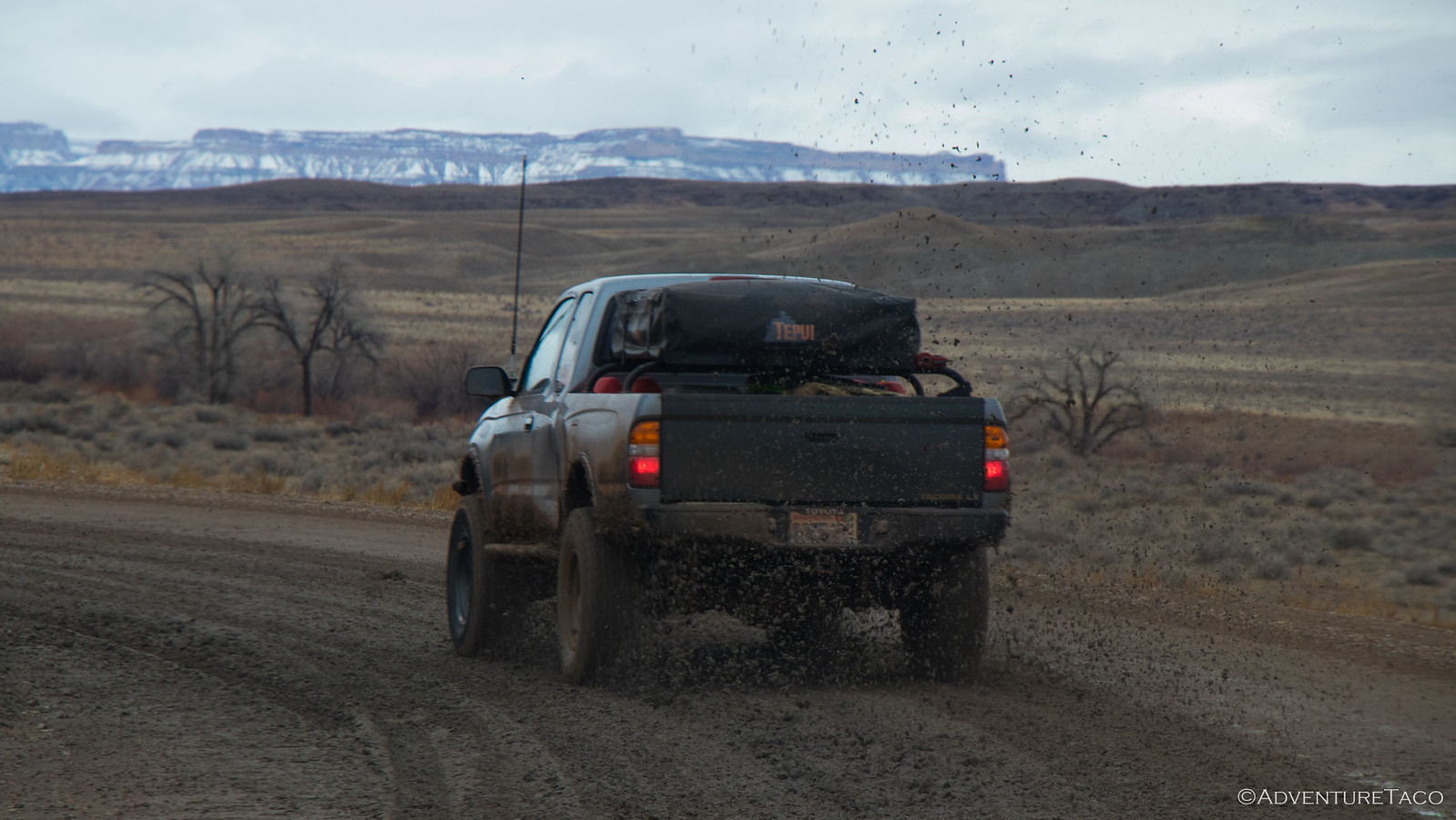 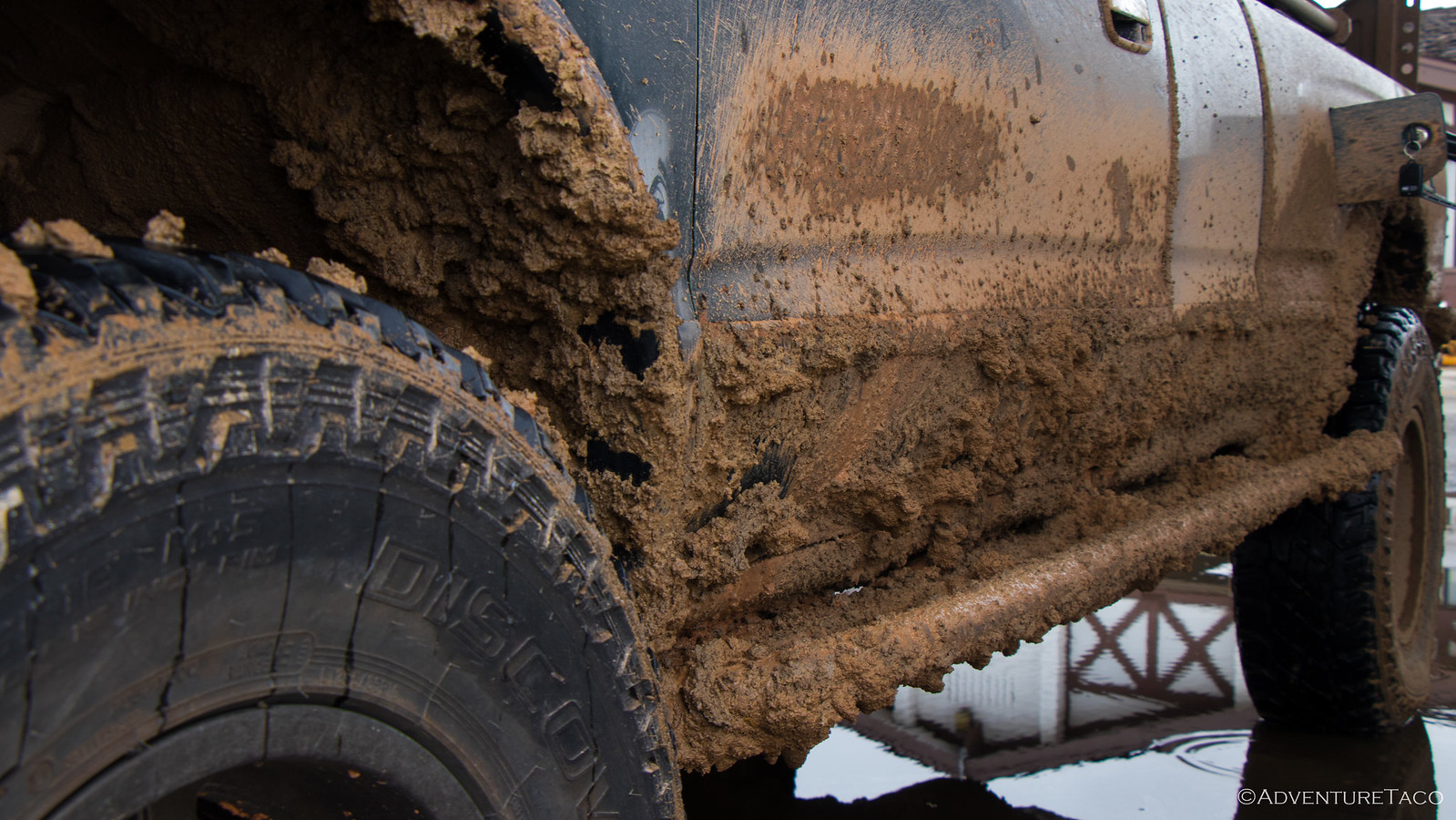 As we continued on, speeds increased. 35, 45, 55mph. And then, we hit a whoops. I think Ben and Zane saw it coming, but I was momentarily distracted by something else and missed until we were right on top of it. "Bump!" I yelled, and "Oh Shit!" was the response I got back, as the truck and everything in it launched into the air.

We pulled over and checked everything shortly there after and things looked OK (I was worried) so continued on. Later, as we'd get into Green River and onto pavement, I'd feel a new, serious shake and the associated noise. Hoping it was just some balancing weights or a need for an alignment, we figured - it's a Toyota; we'll be fine.

We fueled up and aired up and said our "till-next-time's" - with only ~8 hours "to home," Ben, Kirsten, and Zane were headed to Moab for lunch and one last night camping, but with a 20-hour drive we had to start our trek home early, another awesome adventure under our belts. 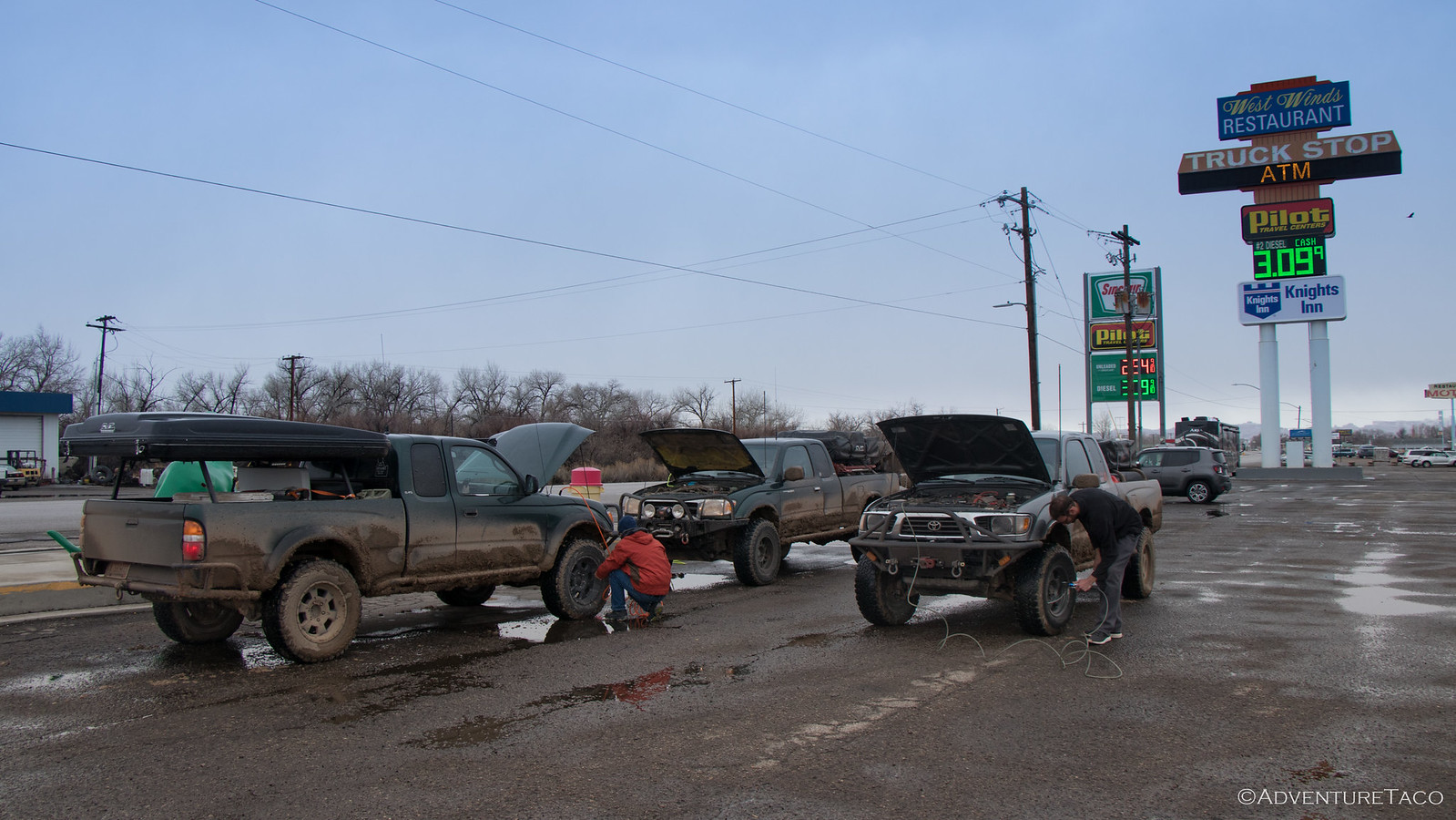 On the road, we split the driving - stopping only for fuel and food as necessary. In a final hurrah, we experienced a dramatic sunset just south of Boise - surely a beckoning for the next trip! 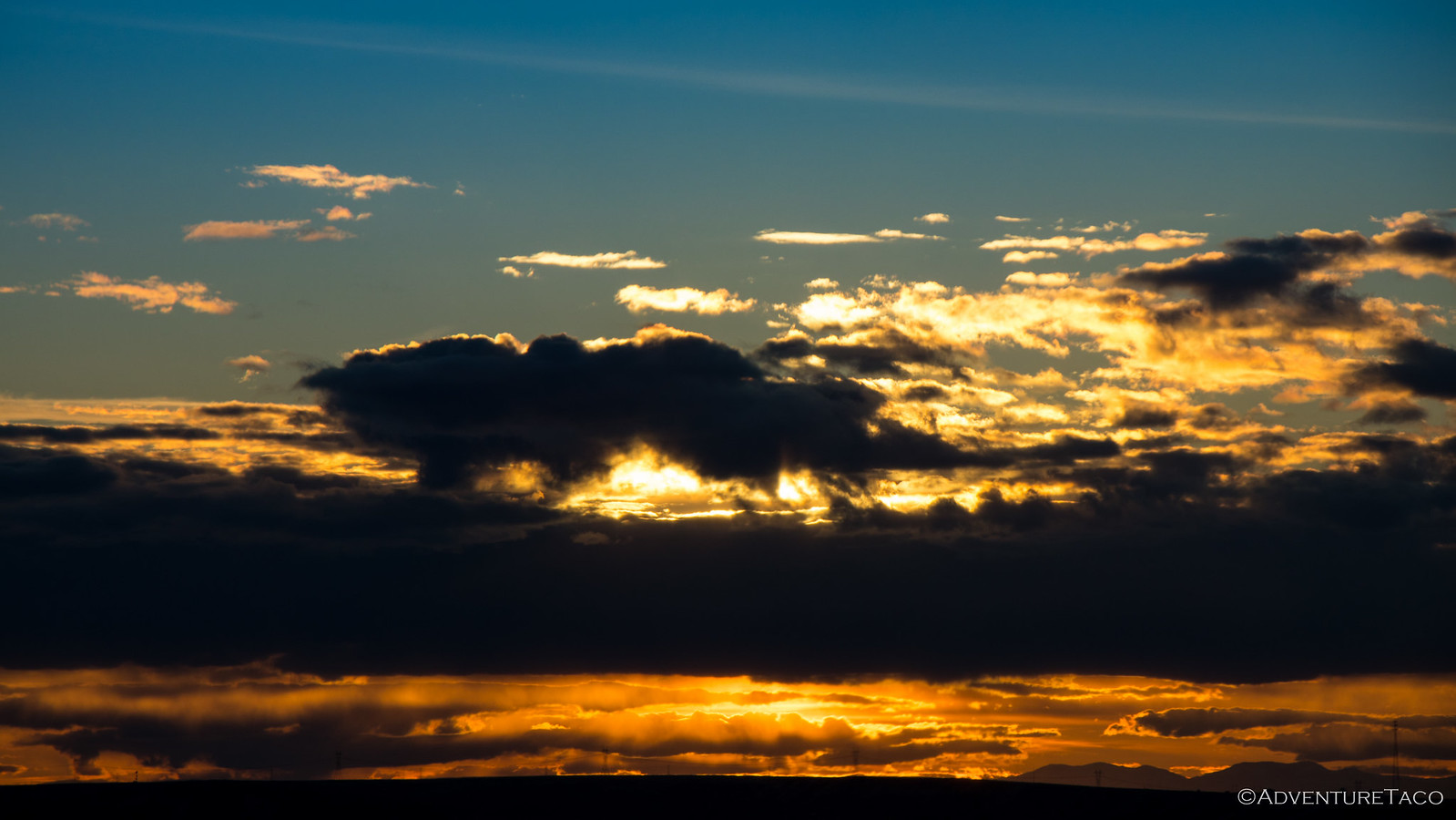 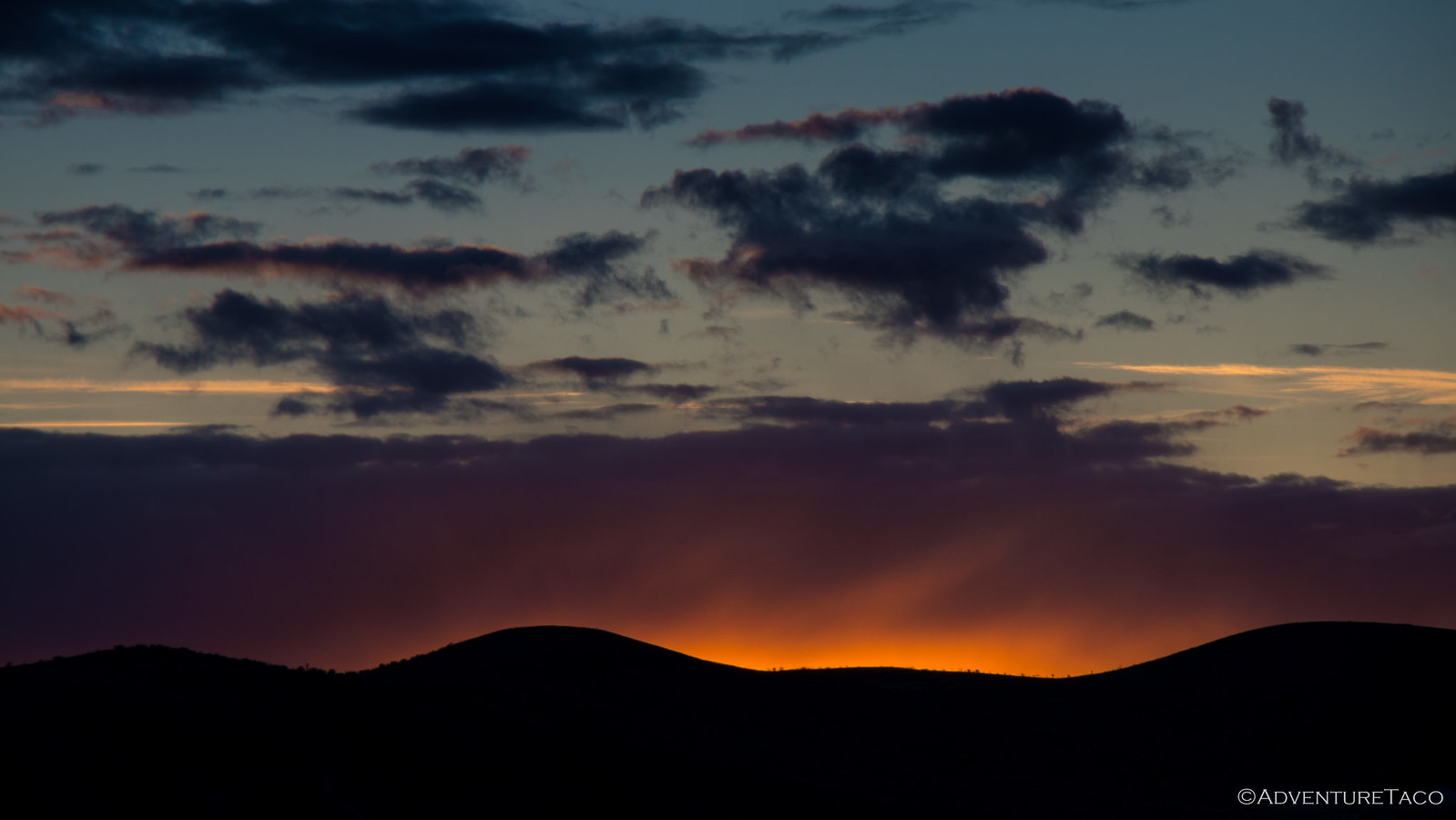 This whole time, the rattle-and-shake I'd noticed earlier was definitely still with us, and when we stopped for dinner I took another look under the truck. Noticing oil on the rear diff, I poked around a bit more and realized that I'd destroyed the rear-most u-joint (or perhaps accelerated it's destruction). Of course, with the u-joint loose, the pinion seal for the rear diff wasn't super happy, which had led to a bit of the oil seeping out - not ideal, but the diff was still full (oil came out when I removed the fill plug) so I figured we could limp the truck the rest of the way home. 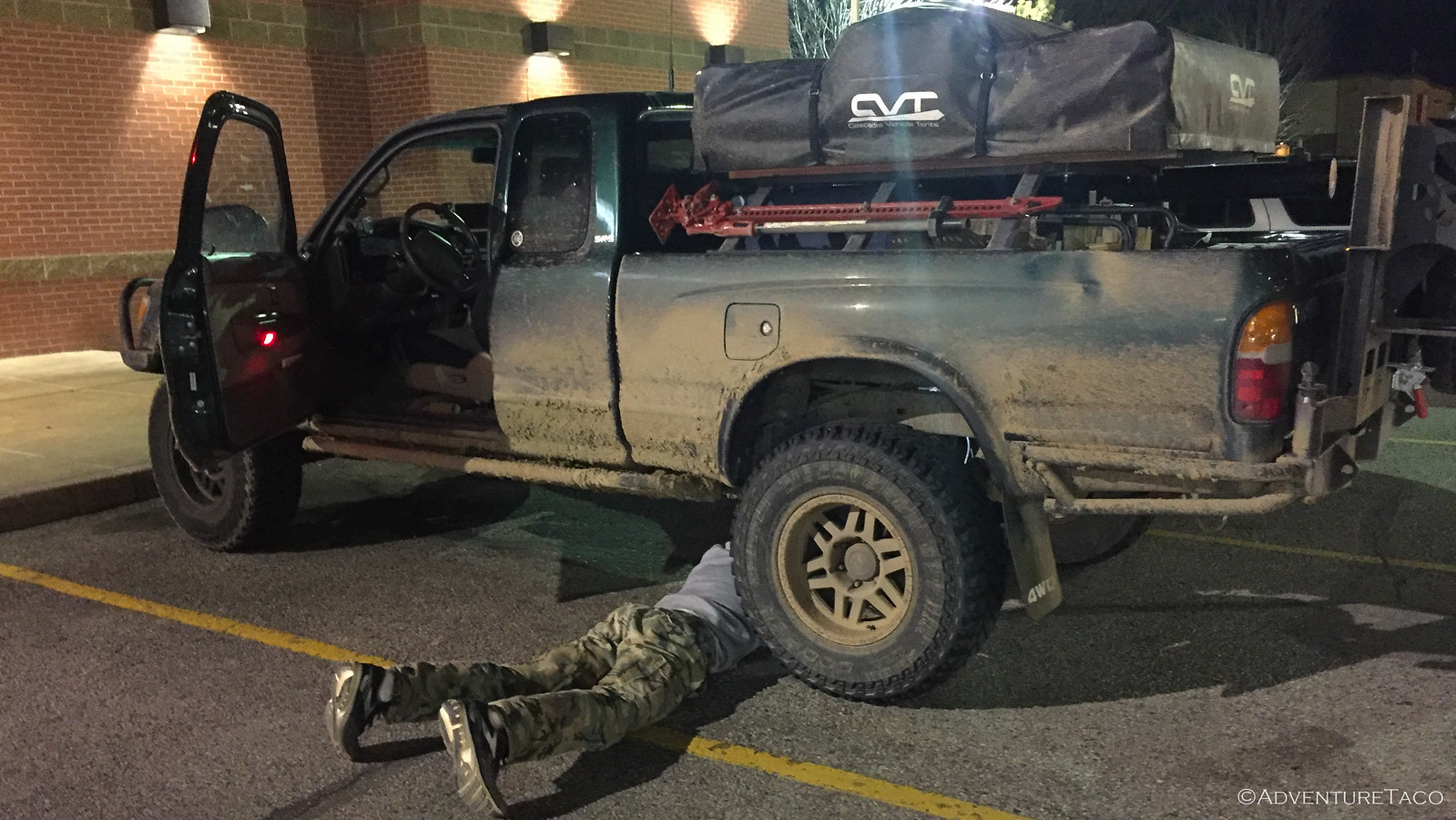 We arrived home at 4:30am the next morning - exhausted but glad to be back safe, and to get a few hours sleep in the coziness of our own bed. The next days of course would bring the drying out of the tent, diagnosis of truck problems, and a good power-wash - but those are other stories! 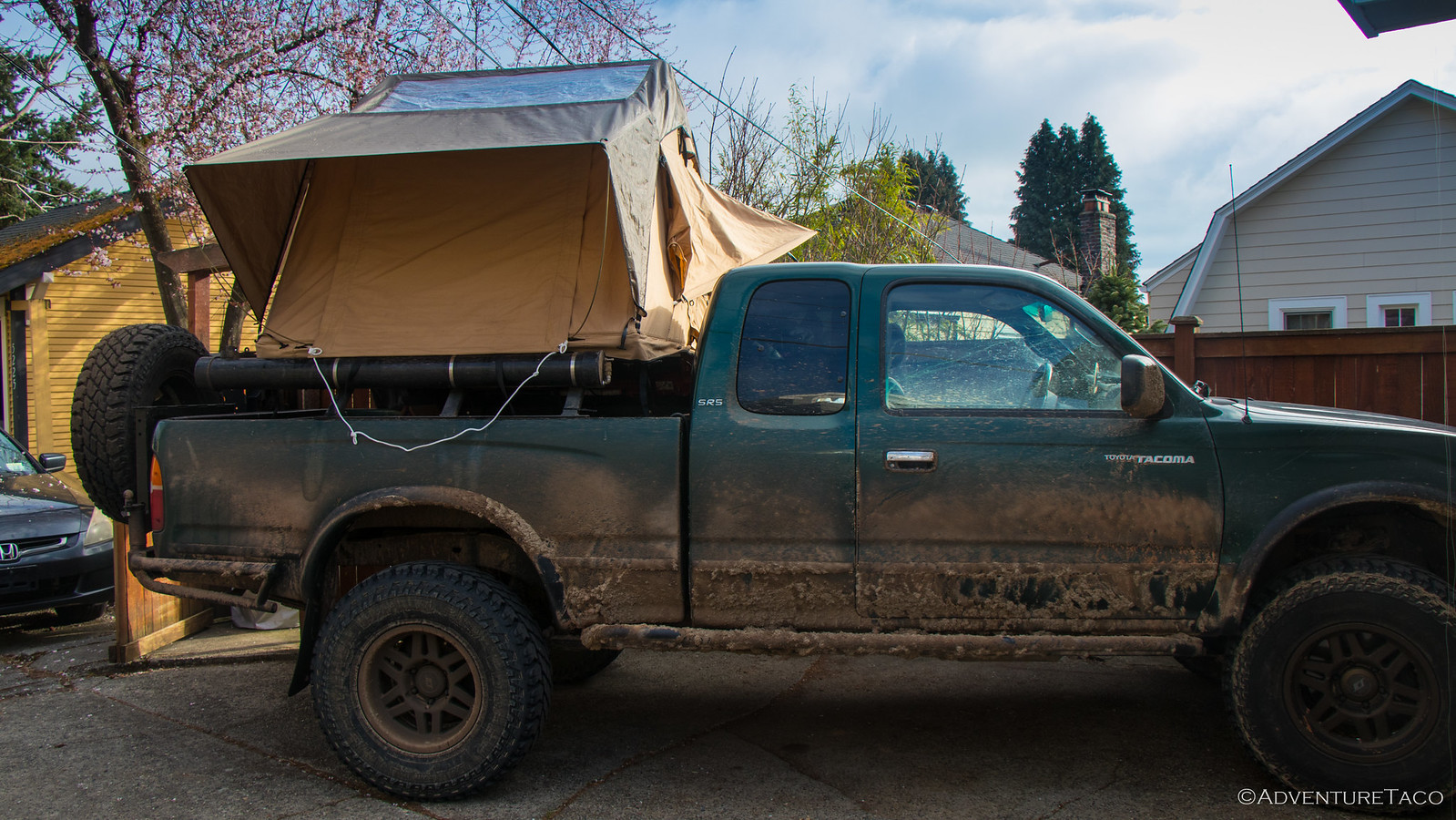 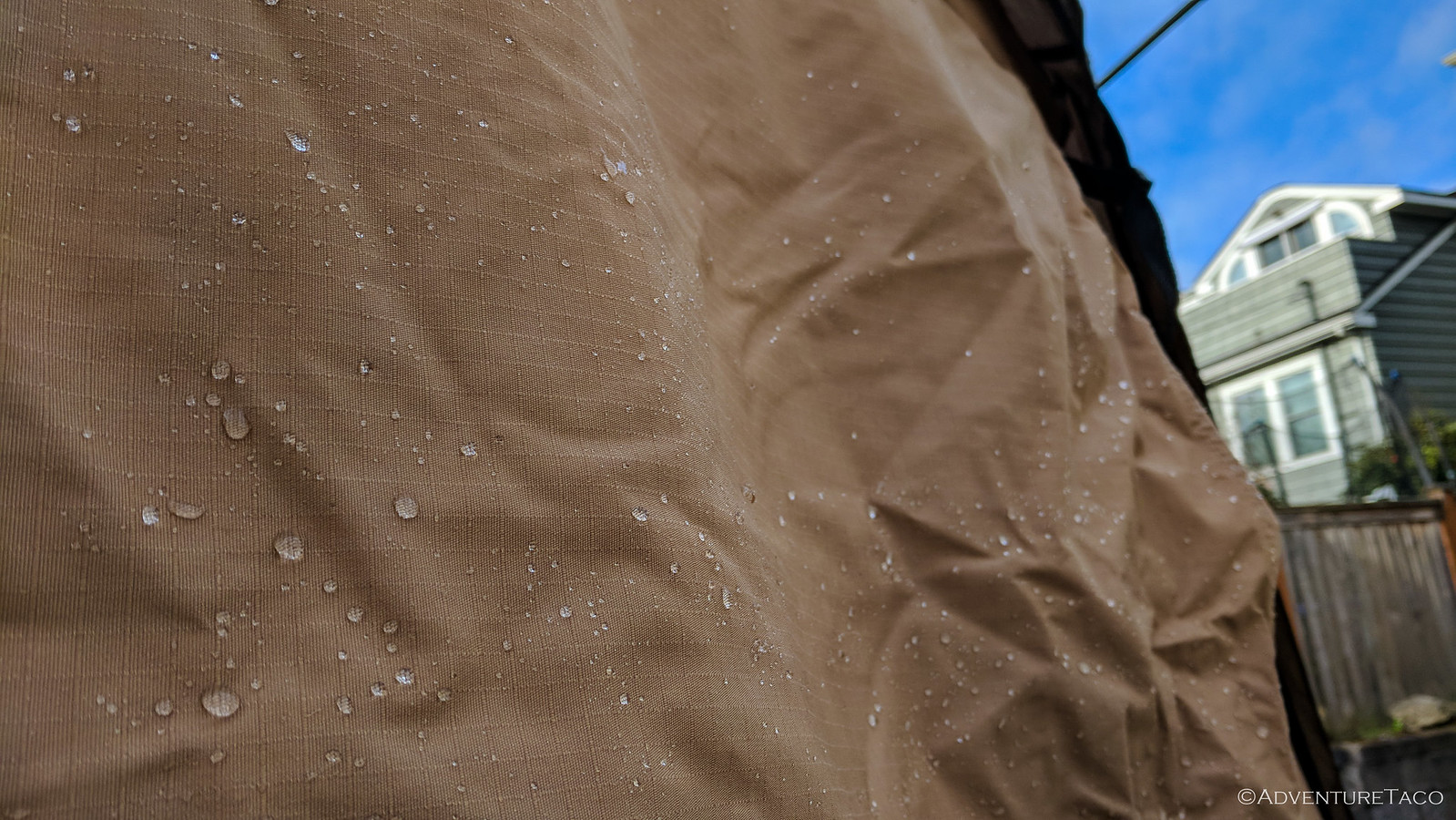 catch up or keep reading THE MAZE 2018 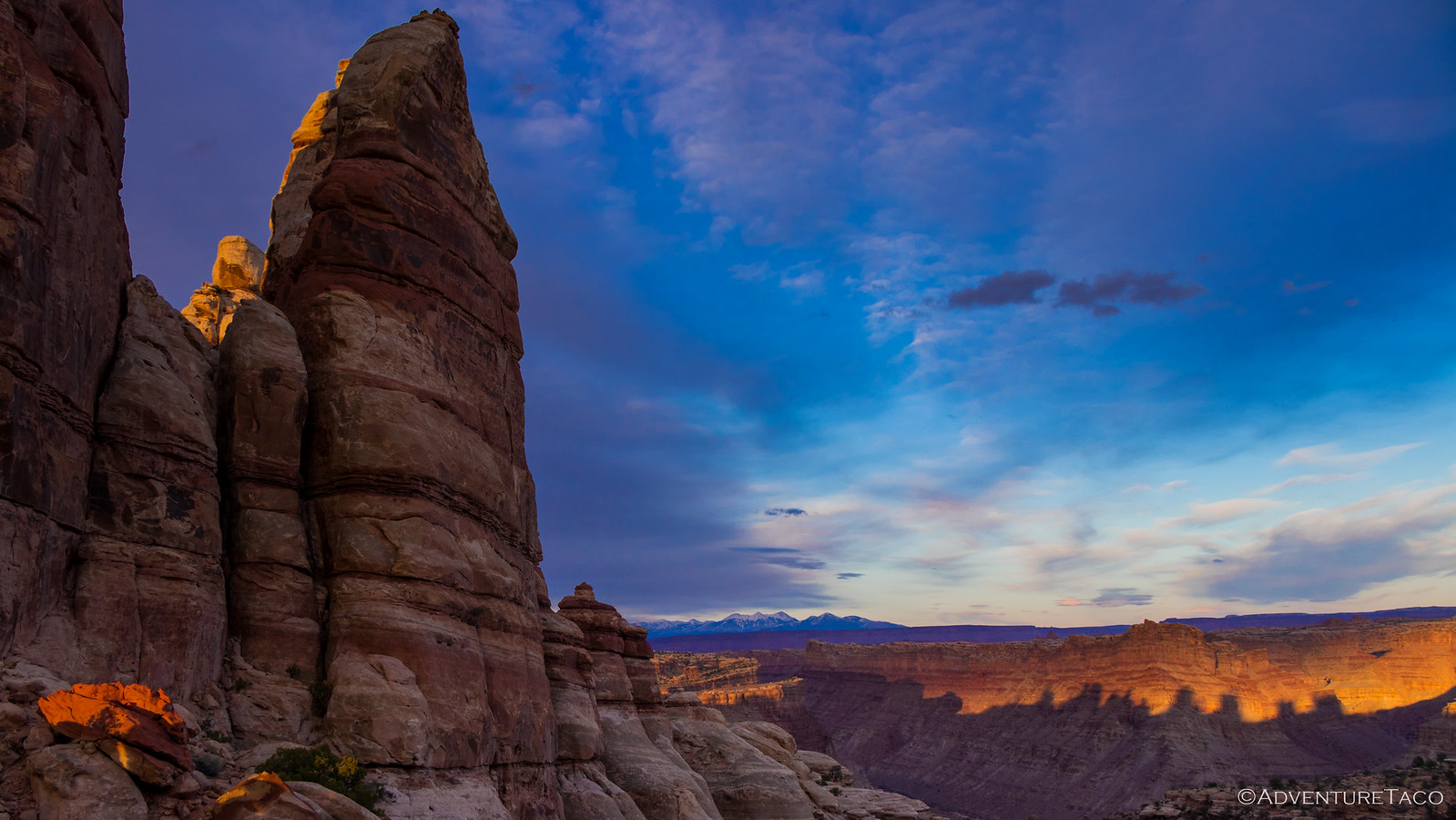 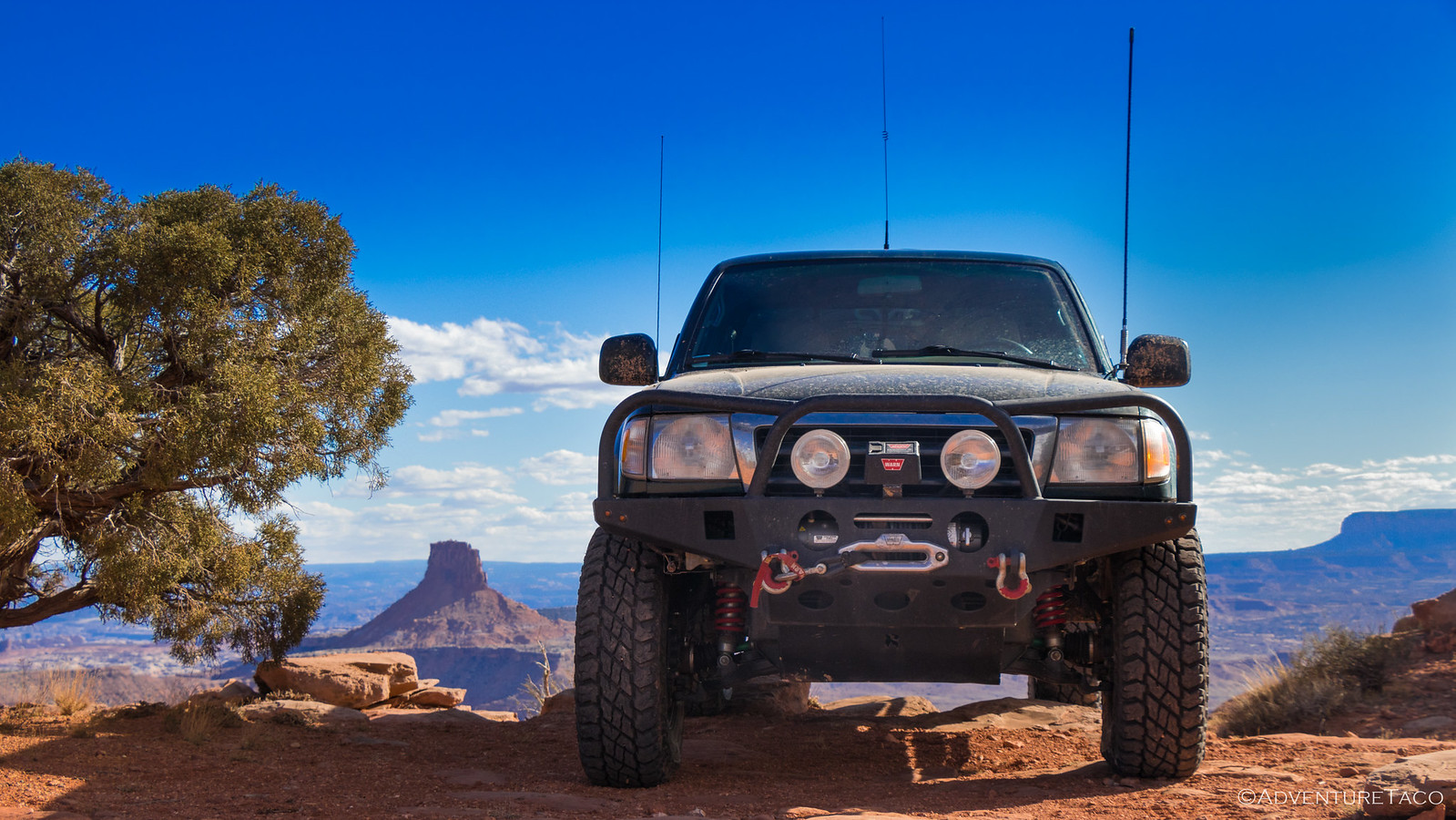