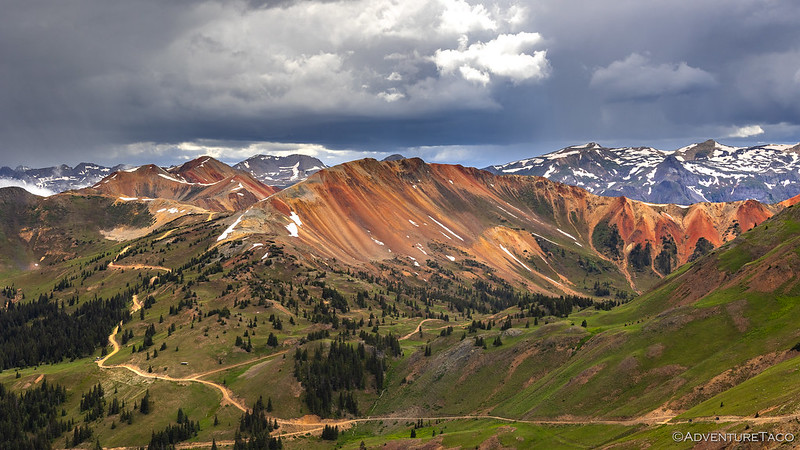 Wet and Bumpy through the Alpine Loop (Jun 2021)

Having spent the last six days on the New Mexico Backcountry Discovery Route (NMBDR), there were a few things that needed our attention before we knew exactly what our next move would be. Pulled over where the last of the dirt hit CO-17, we each had one bar of LTE service and we set to work.

I made a quick call to Alcan Spring - in Grand Junction, CO - to check in with Lew, the new owner. Having very much liked my first set of leaf springs, I'd ordered my second set several weeks earlier. Before leaving on the trip, I'd talked to Lew and estimated that the BDR would take us a day longer than it actually did, and as such had suggested that I stop by two days from now, rather than one. Lew was super understanding and suggested that if I showed up at the end of the follow day, they could have my springs ready to go. Perfect!

@mrs.turbodb made a similarly quick call to her dad - a resident of Colorado - to let him know that we were in his home state, but pretty much as far away within the state as possible. Rather than adding several hours to our already long drive home, she worked out a plan to go camping with him later in the month. Perfect!

With those coordination's worked out, everything sort of just fell into place - we'd head over to the San Juan's, spend the afternoon and following morning running a few trails in The Alpine Loop, and then wander our way north to Grand Junction to pick up the springs on the way home.

As usual, if only it was that easy!