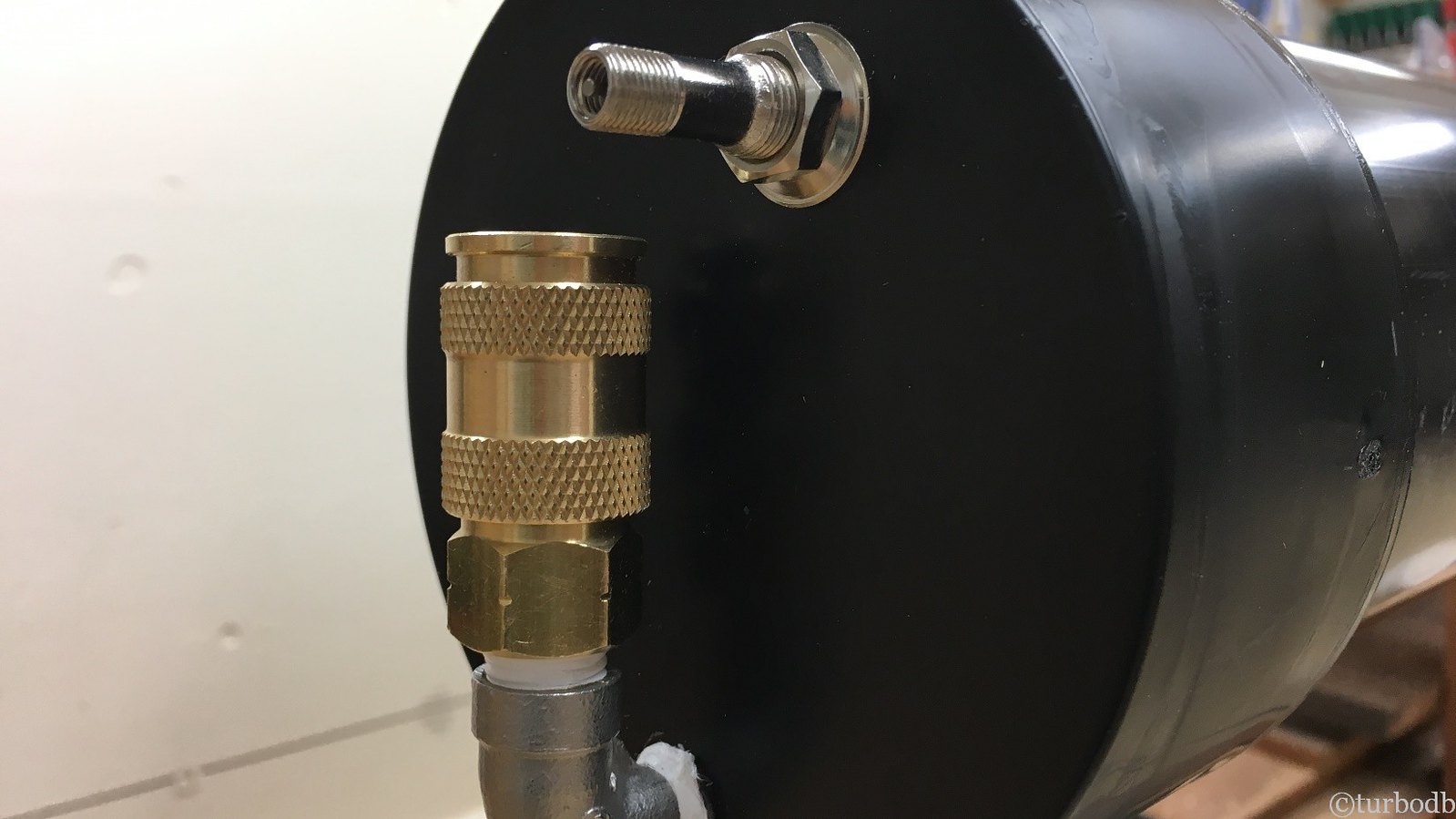 Truck Shower - What is that Smell?

Of course, when you're out exploring the wilderness, showers can be few and far between. Often times that is fine - there are opportunities for hot springs, lakes, and creeks - any of which can make a great place for lathering up and taking care of some of the sweaty grime that can build up.

But sometimes it'd still be nice to have a warm shower. On our week-long trip running the Oregon Backcountry Discovery Route, it turned out that the first 4 days of the trip presented no washing opportunities. And with temps hovering around 100°F, we were gross. And The Tour is coming.

Upon our return, I started looking for ways to make washing on the road possible. I figured someone else must have run into this same thing and come up with a workable solution. And I was right. In my research, there are two broad categories of "shower." The first is a pump that you submerge in a vessel of water - nice because it's relatively compact, can use any container (bucket, pan, bowl, etc.) to hold water, and if you're near a water source, you can take as long a shower as you want.

Of course, the water may not be all that warm. 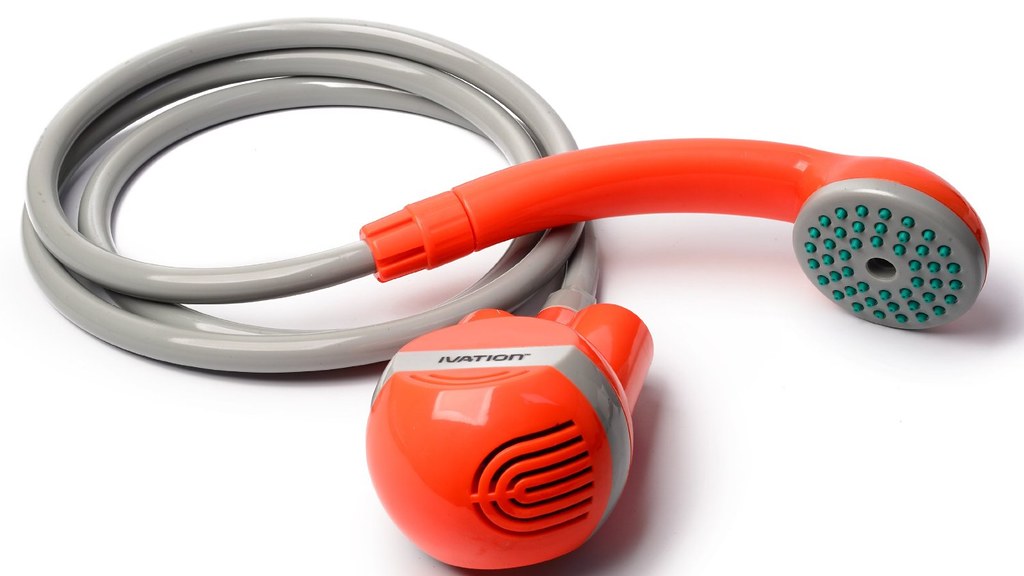 The second type is what I'd classify as "a vessel of water that you empty onto yourself." These come in different shapes and sizes - some you hang on a tree, others attach to the car - but the idea is that the sun heats up some water in a container, and then gravity or pressure push the warm water out onto you - the smelly smelly human. 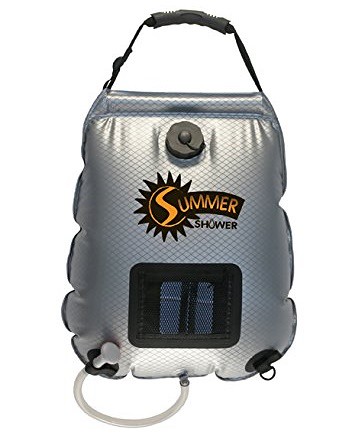 I didn’t really love either of these, because I wanted warm water, but I didn't feel like I'd generally be "in a camp" for long enough (or early enough) to heat up a big container of water. Instead, I wanted something that would attach to the truck, be self-contained, and give me warm water wherever we ended up each night.

I hatched an idea (OK, I'm probably not the first one with this idea…as usual) - use a 4" ABS pipe for the vessel, and the compressor under the hood to pressurize the water, just like a real shower. The first step was to gather materials - some 4" ABS pipe and end caps; a 2½" threaded adapter and plug; a valve stem and pressure relief valve; and a ¼" NPT elbow + quick connect coupling to make up the vessel; plus a quick connect, two hose ends, some flexzilla hose, and an NPT-GHT adapter for a spray head for the shower.

Materials in hand, it was time to get started building. First, I'd drill out holes for the valve stem and elbow + quick connect in one of the ABS caps. Both used the same 7/16" bit, which was nice. Of these, the hole for the elbow and quick connect gets threaded; the valve stem hole doesn't.

The key here is to get the quick connect drilled as close to the bottom of the cap as possible, so you can get as much water out of it the system as possible. Positioning of the valve stem is less important. 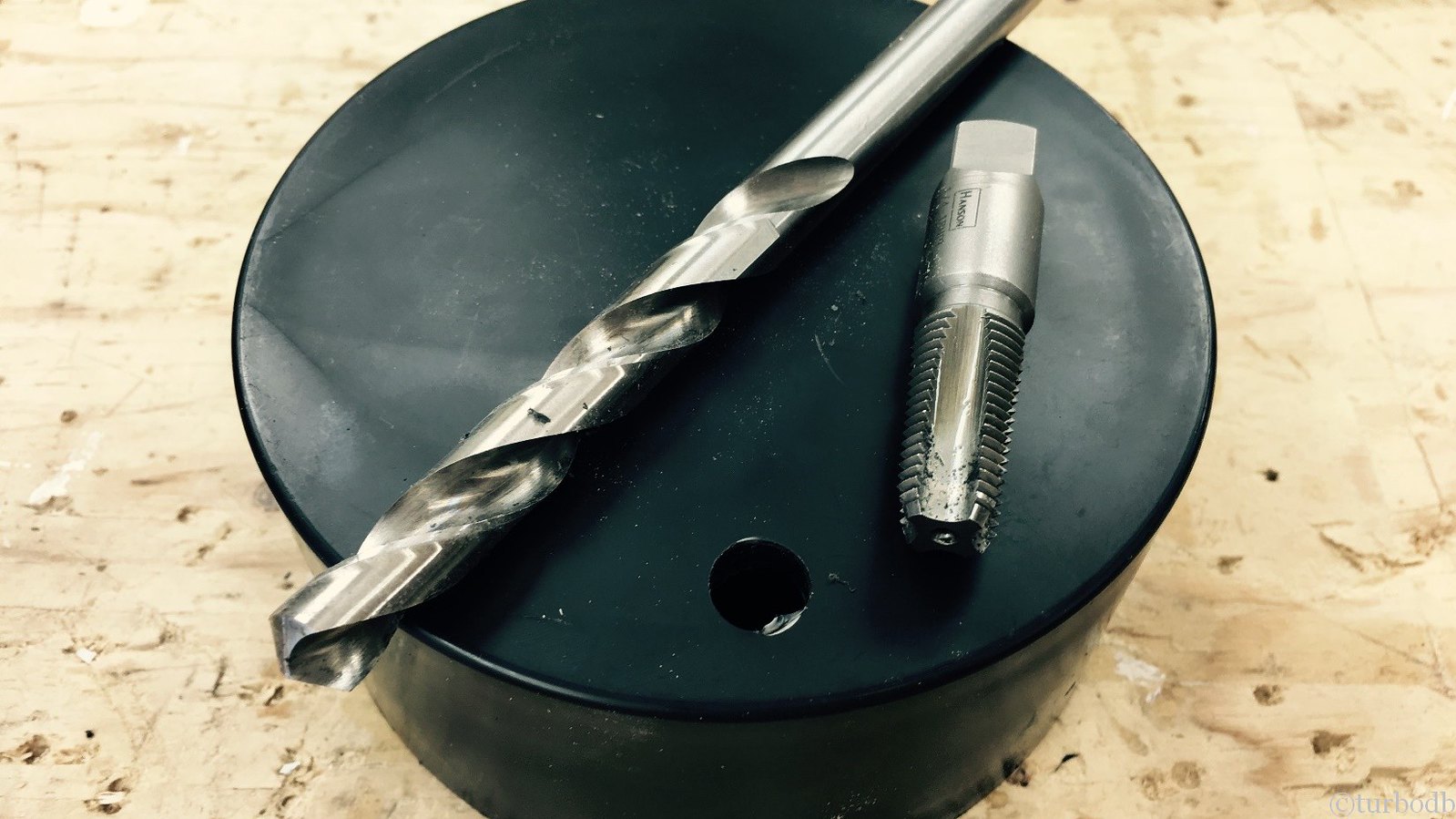 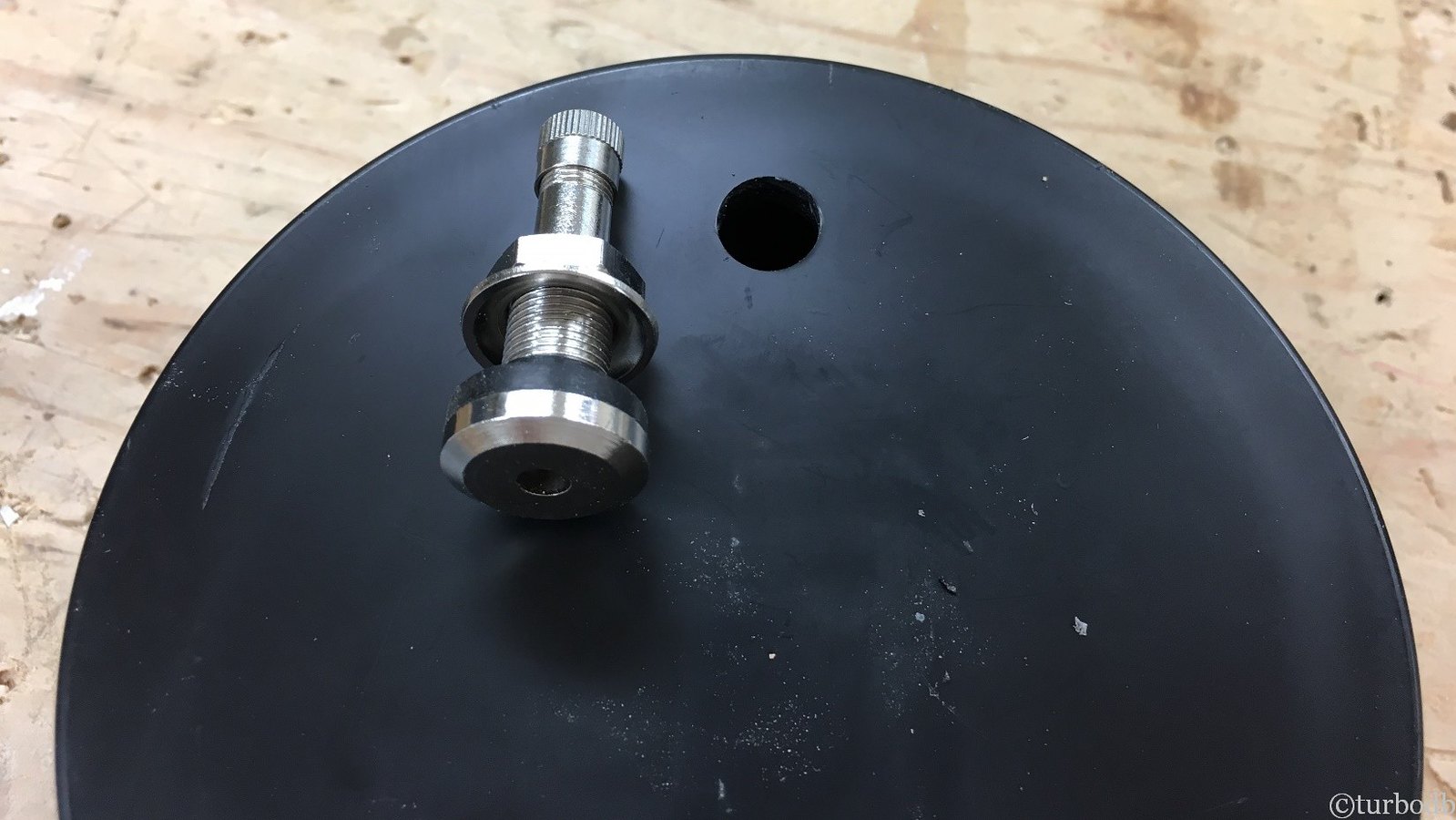 Next, it was time to drill and thread a hole in the 2½" plug for the pressure relief valve (set at 50psi) in the plug for the threaded , which will ensure that the Truck Shower won't explode or become a rocket. 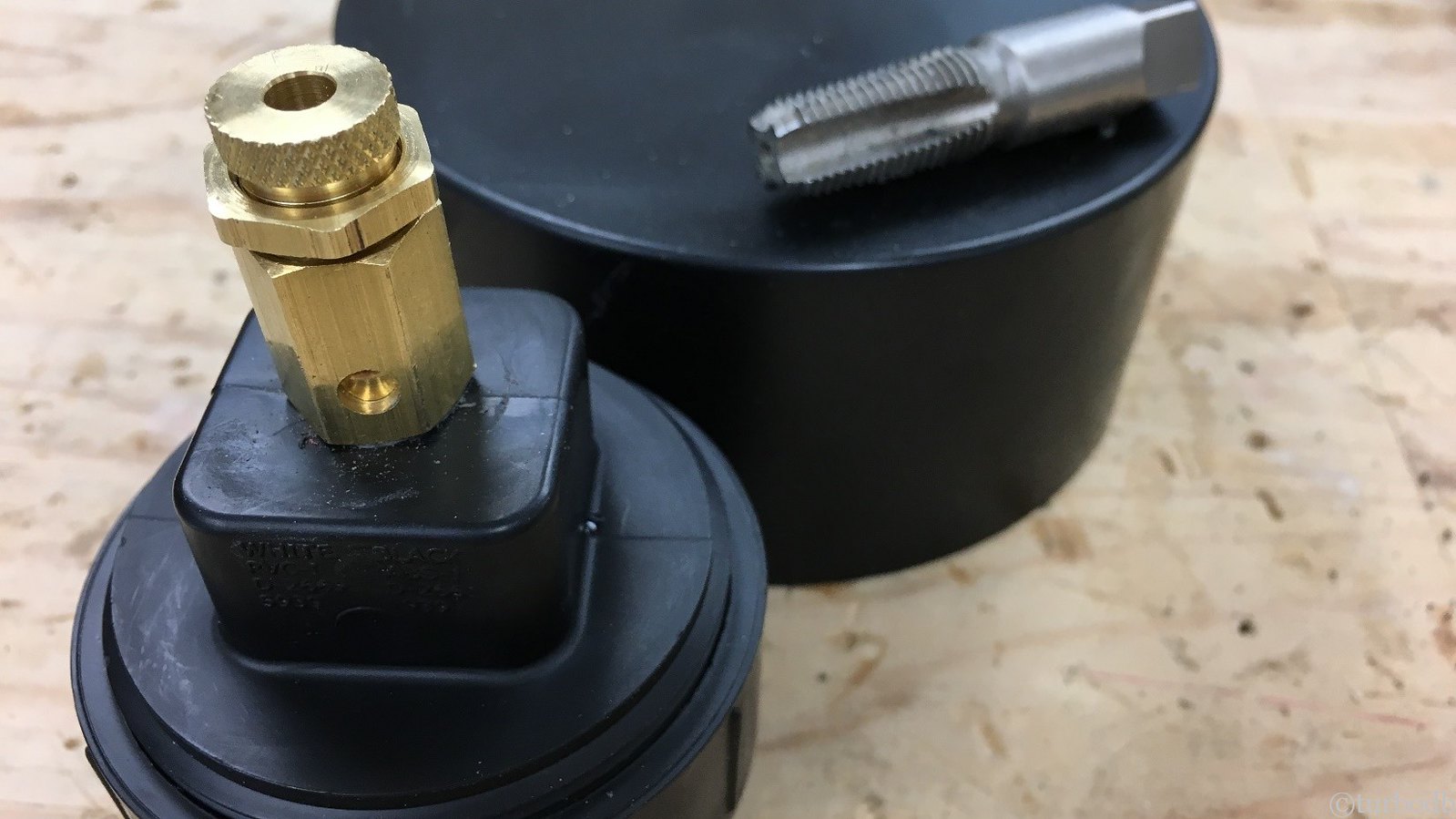 With that done, I used the hole saw to drill a hole in what would be the top of the vessel for the filler, and then it was time for assembly.

One fitting at a time, ABS cement both sides. End caps first, making sure to put the outlet hole (with the elbow and quick connect) 180 degrees from the 2 3/8" filler hole. With the end caps on, I lathered on the cement to the filler and fit it into the hole on the top of the vessel.

Then I waited. Full cure is two hours and I was super curious to know - would it hold pressure?

It did! With a few custom brackets that I made out of some 1½x1" tubing, and pipe clamps I attached it to the bed rack. 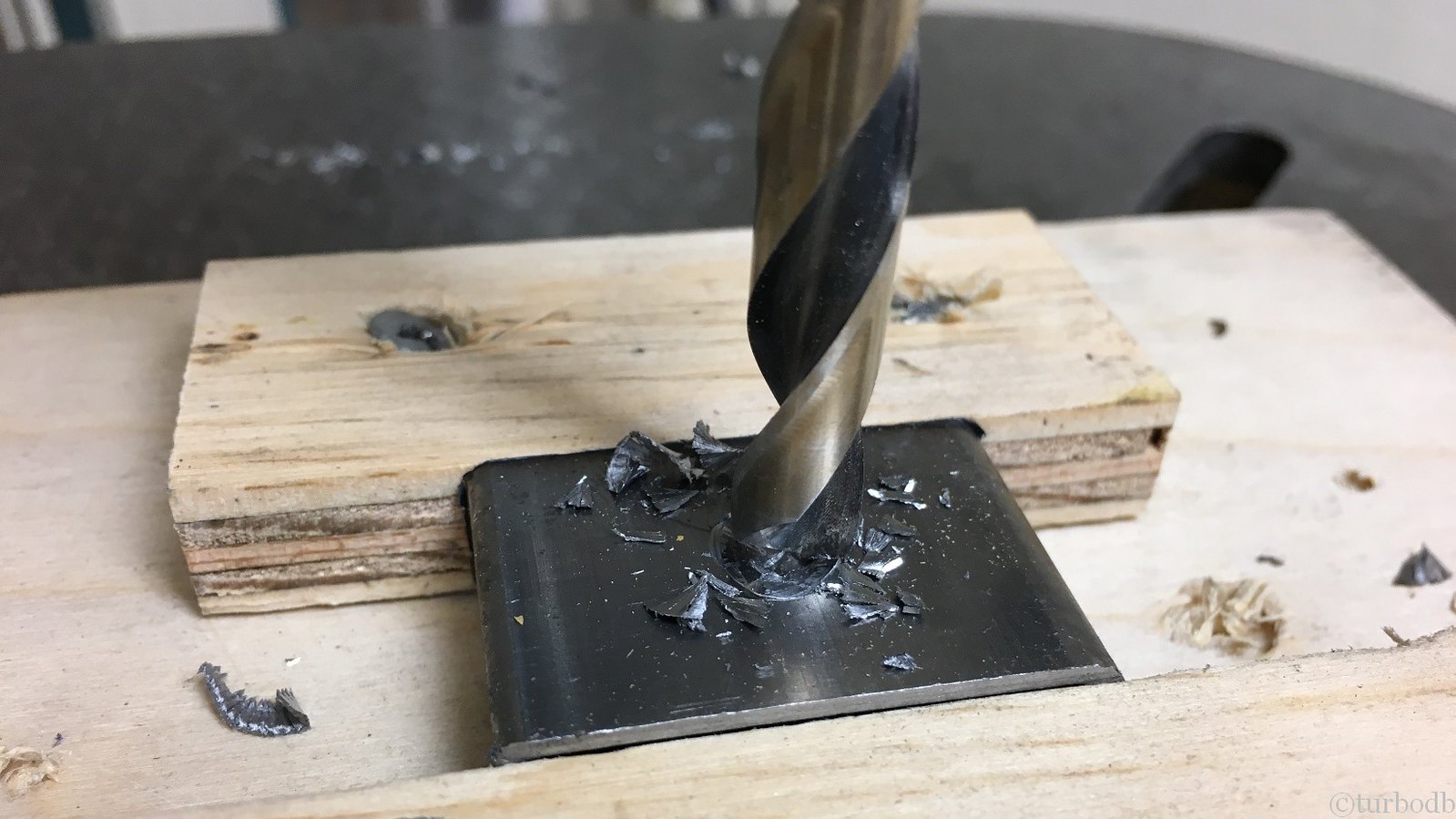 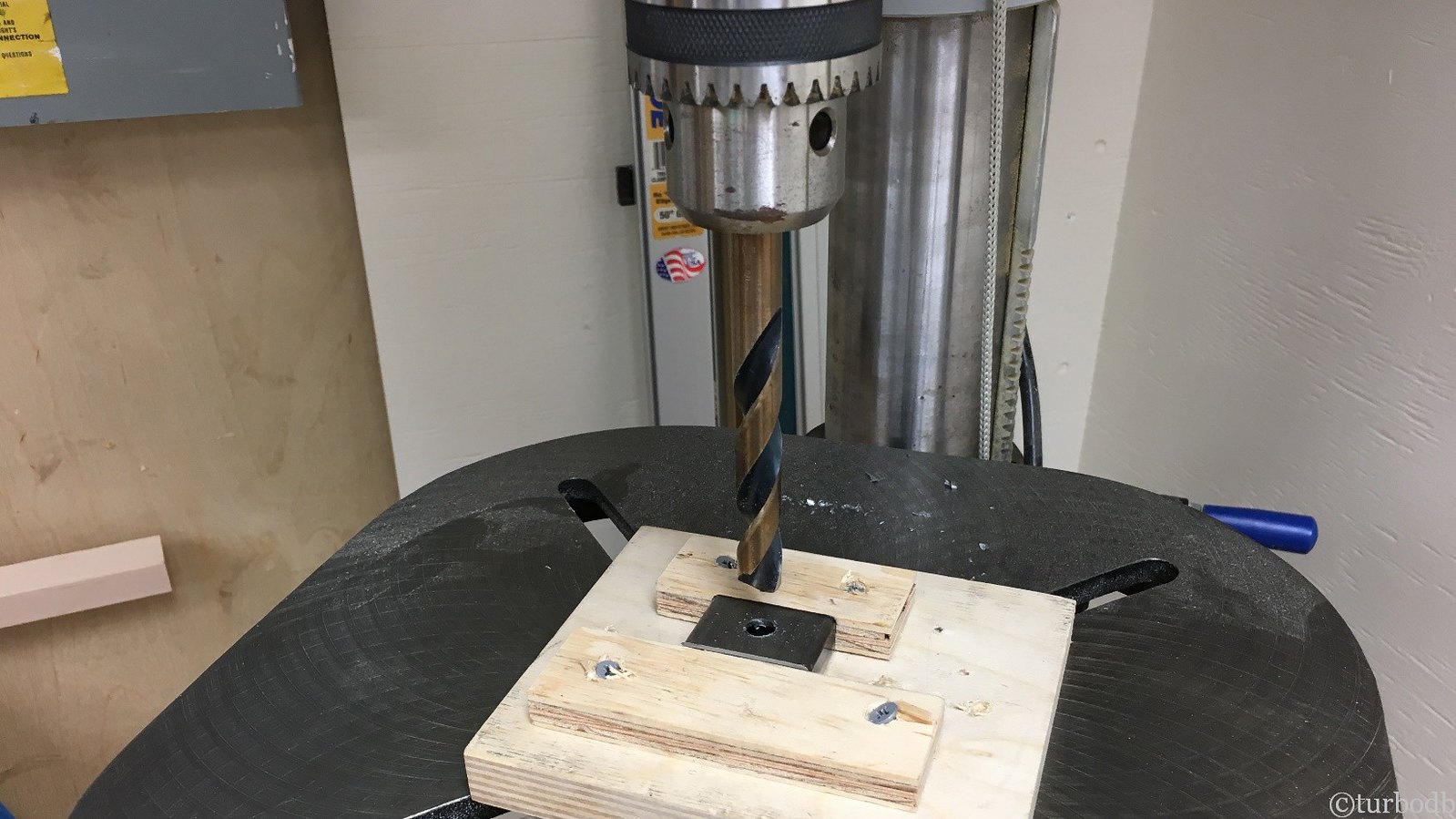 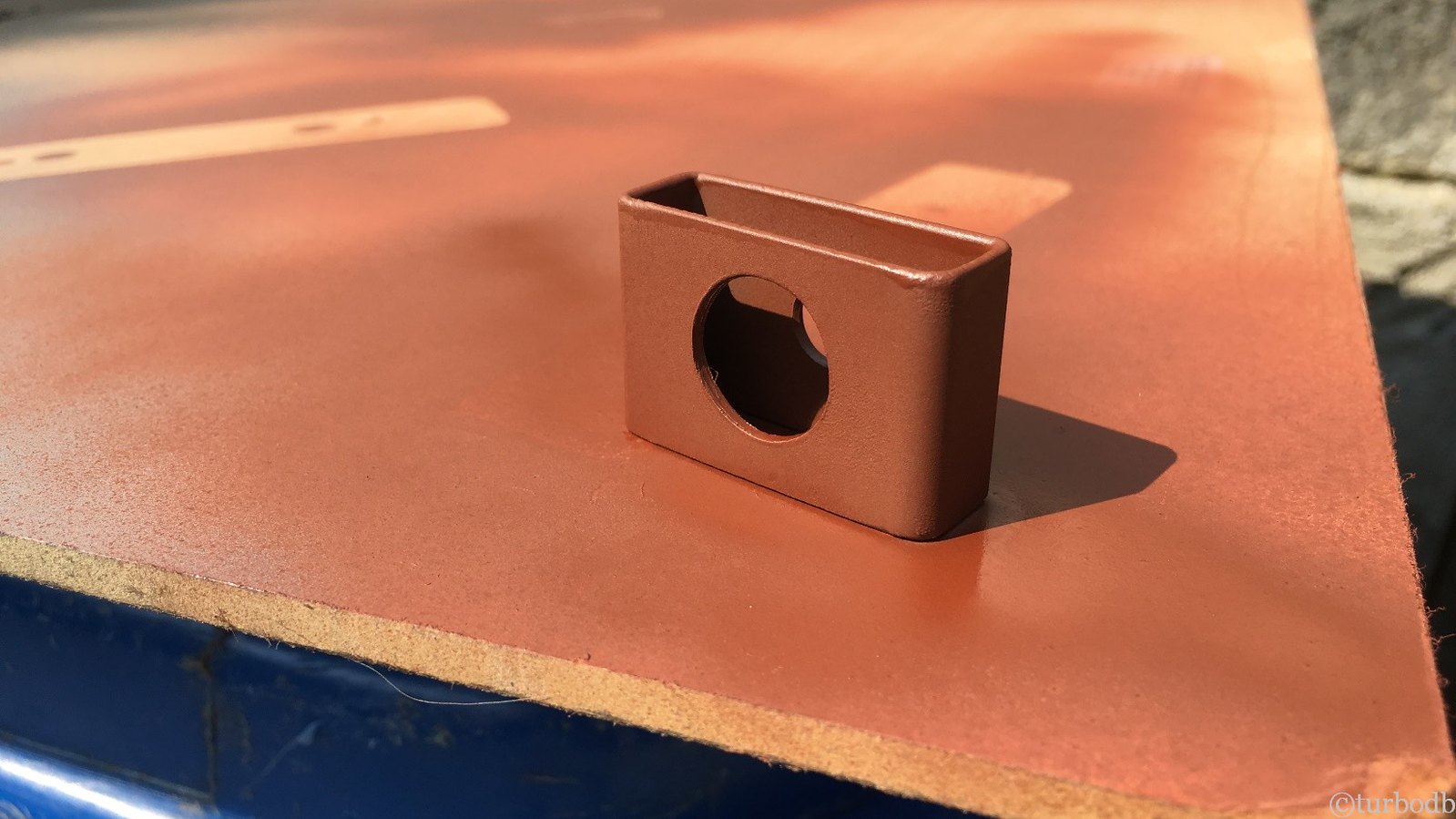 Now we've got warm (to hot) water for two-to-four-ish showers right on the truck - awesome. And perhaps most importantly, @mrs.turbodb approved. 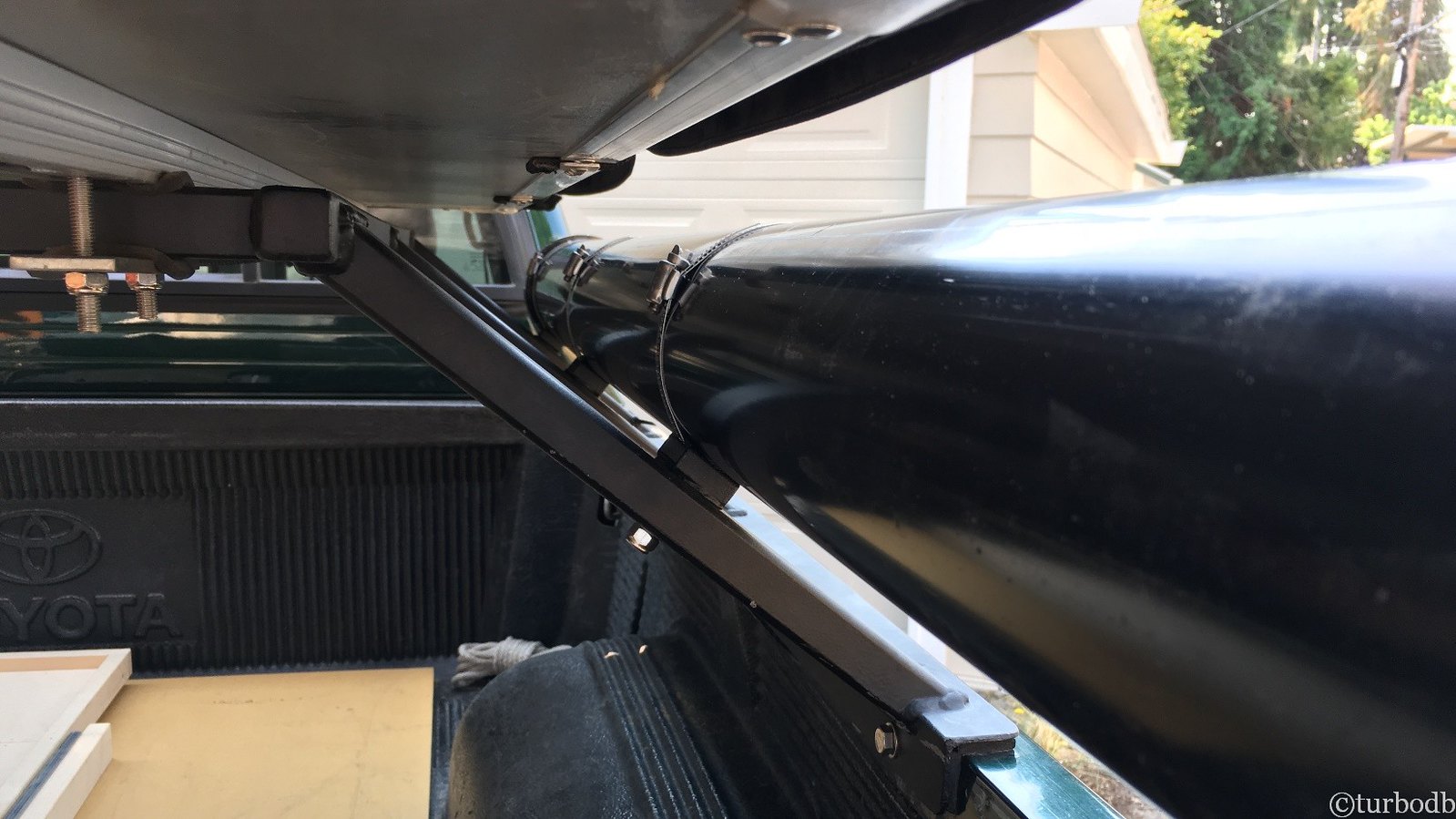 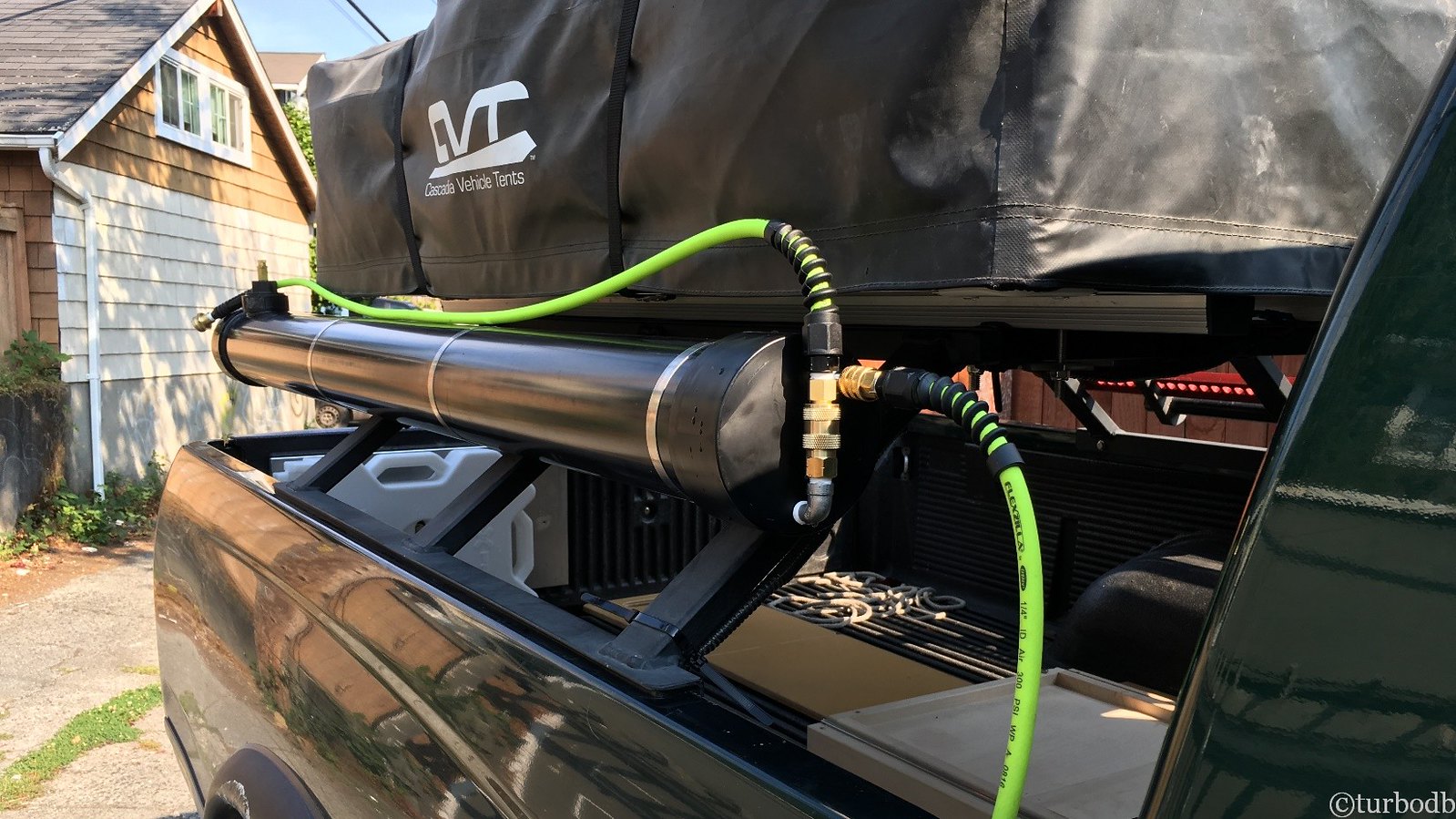 Oh, and since I used the same air fitting quick connects as the on-board air, it's easy to "blow dry out" the shower hose when we're done showering. So win.

[Update 2019-09] I've removed the shower from the truck. I've removed it because it never really gets hot. Ever. Even in full sun all day, water is luke warm at best. I think that being on the side of the truck, with airflow going by it all day, it just sucks the heat right out of the system. So, I took it off after a few trips, never having been able to use it as a shower.

If I were to try a shower solution again, I’d just get one of these, and only use it when I was in the same camp for a day or two.

Really though I just use a washcloth and “room temp” soap+water to wash my face and feet. And disposable baby wipes for everywhere else. This has worked well for me on trips up to 2½ weeks long.