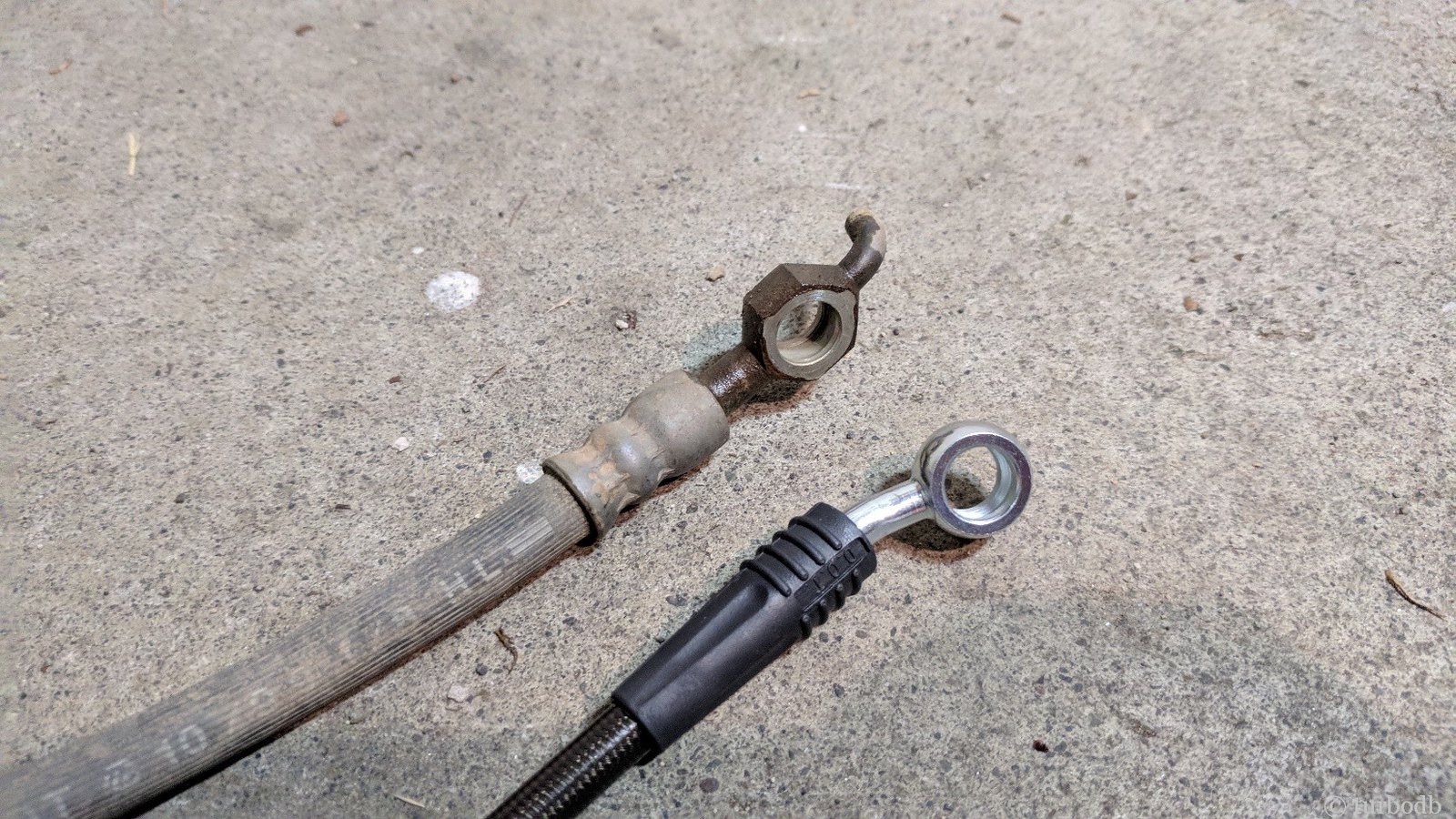 New brakes nearly installed, I waited anxiously to see how the replacement brake line that Steve @Wheeler's Off Road sent was mailed - was it fast, or would it be slow?

It was great - he sent it 1-day and I had it Saturday morning. Not only that, but he sent an entire brake line kit, so now I've got an extra line and set of crush washers to throw in the trail kit, in case something goes wrong on my or a buddy's truck! Thanks Steve!

Installing the line was pretty straight forward, especially as I'd done the other already. One interesting thing to note - and the reason that new lines are required - is that the stock Tacoma brakes use a line with a little "registering beak" on it (which fits into an indent in the caliper); the 13WL Tundra brakes don't. Additionally, the circumference of the interior of the banjo fitting is ever-so-slightly larger for the Tundra brakes (I hear).

At any rate, with the line installed, @mrs.turbodb came out and helped bleeding the system. A straightforward process, I started in the rear passenger, then moved to rear driver, front passenger, and front driver to ensure that the system was properly bled. Of course, the rear was good-to-go from the start since I hadn't messed with anything there, and the fronts had lots of air (needing to fill up the new lines, etc.). I made sure to keep the reservoir topped off as I went.

The process went without a hitch, mostly. One thing I discovered was that the bleeder valves on the 13WL calipers I'd gotten from Napa used a different size wrench than the old Tacoma bleeders (which are 10mm). In fact, they turned out to be 8mm, which extra-sucked, because I didn't have an 8mm flare nut wrench. Unfortunately, I'd already returned my Tacoma caliper cores, so I couldn't just grab the old bleeders and re-use them. I'll need to see about getting some different bleeders at the local Napa. Or Toyota. Or get another wrench.

System bled, it was time for the ultimate test - head out on the freeway (I-5), risking life and limb - to bed the new rotors and pads. At least I'd know quickly if I'd really screwed something up!

The bedding process, I'd learned, is a process by which you deposit a layer of pad material evenly across the braking surface of the rotor. This minimizes squealing, increases braking torque, and maximizes pad and rotor life.

Note 1: With less aggressive street pads and/or stock brake calipers, you may need to do this fewer times. If your pedal gets soft or you feel the brakes going away, then you've done enough. Proceed to the next step.

Note 2: During this process, you must not come to a complete stop because you will transfer (imprint) pad material onto the hot rotors, which can lead to vibration, uneven braking, and could even ruin the rotors.

Note 3: Depending on the pads you are using, the brakes may begin to fade slightly after the 7th or 8th near-stop. This fade will stabilize, but not completely go away until the brakes have fully cooled. A bad smell from the brakes, and even some smoke, is normal.

After the break-in cycle, there should be a blue tint and a light gray film on the rotor face. The blue tint tells you the rotor has reached break-in temperature and the gray film is pad material starting to transfer onto the rotor face. This is what you are looking for. The best braking occurs when there is an even layer of pad material deposited across the face of the rotors. This minimizes squealing, increases braking torque, and maximizes pad and rotor life.

Since I decided that the only place I could get eight, 60-10mph slow-downs, and then 10 minutes of "no brakes" was on the freeway, we headed out on I-5 at 11:00pm, hoping to find light traffic. We did, but only once we got ~45 minutes north of Seattle, near Marysville.

As we put on the hazards and started our series of slowdowns, everything seemed to be going well. The truck was stopping fine (not pulling one way or the other), and no one hit us from behind.

We did have one State Patrol pass us, and then pull over a car just ahead of us - but they didn't seem all that interested in my hazard lights being on, or my erratic driving.

Strange. Or maybe people do this all the time. (No.)

After the second bedding cycle, I pulled over to take a look at the rotors. As I got out of the truck, the smell of brakes, and wisps of smoke greeted me. Guess that's a good sign. A flashlight on the rotors, and they had a blue tinge to them - another good sign! And, there was that film of pad material. Pretty cool, guess it worked. 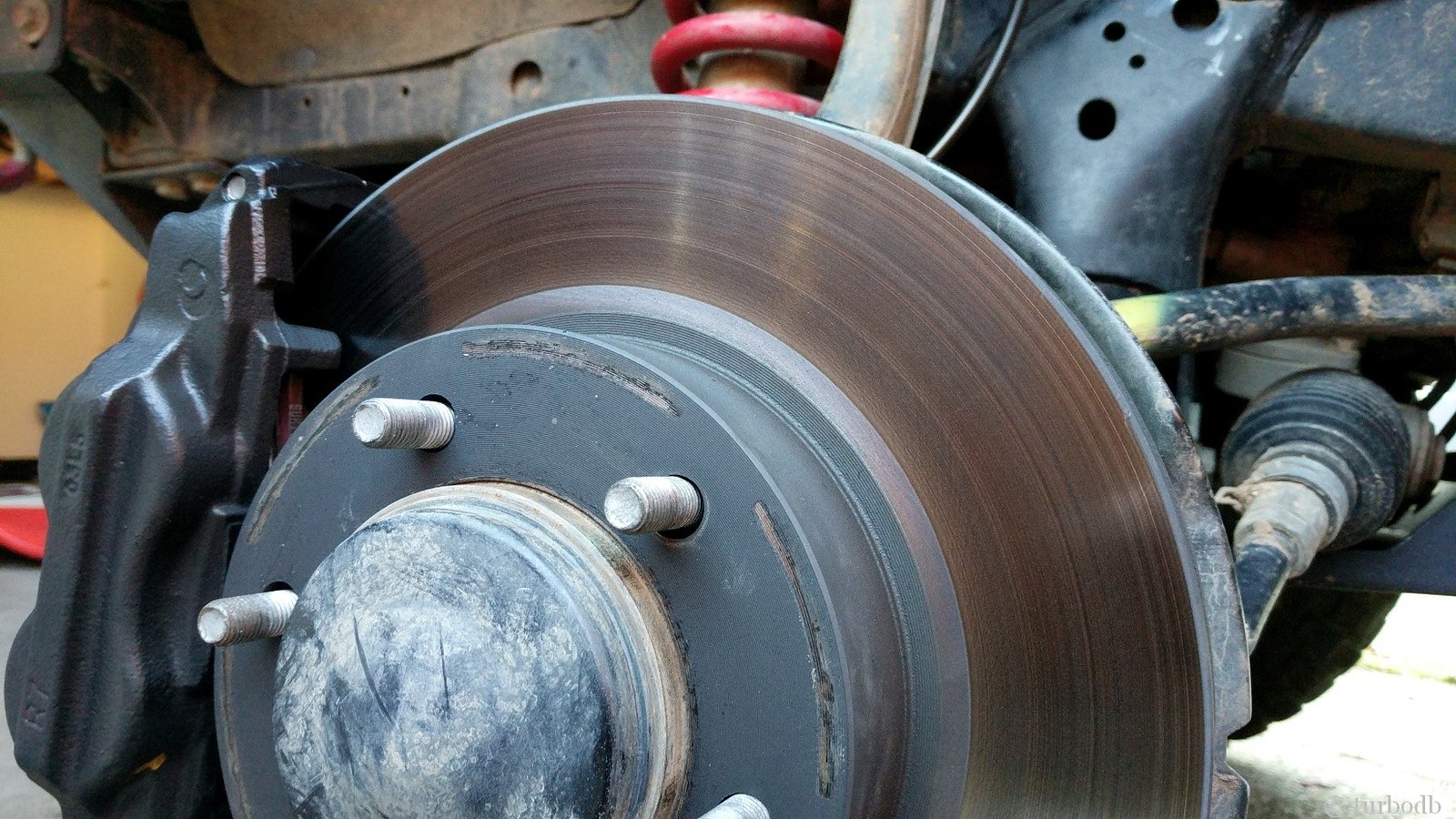 At that point, we headed straight back home. It was 1:00am, and way past our bedtime.

When I got a chance to take the truck back out again for normal braking, I can only describe the braking as "completely normal," which I view as a good thing. The brakes don't lock as soon as I hit the pedal, but it's easy to lock them with additional pressure. To me that means that I've got more braking power than before (larger rotors, pads), but that it won't affect my day-to-day driving in any way.

My guess is that he's correct in his analysis. Perhaps the bedding process helps a bit, but I don't know how it could make too much difference - after all, the same amount of fluid (and thus pressure) is in the system. Therefore, more likely is that I don't notice anything out of the ordinary because I'm used to my larger master cylinder already.

An interesting test will be for Monte and I to trade trucks. I bet the brakes in Igor are more sensitive, and will feel strange to me. And Monte will wonder if my truck is even stoppable.

And then we'll both be happy to go back to what we're used to!