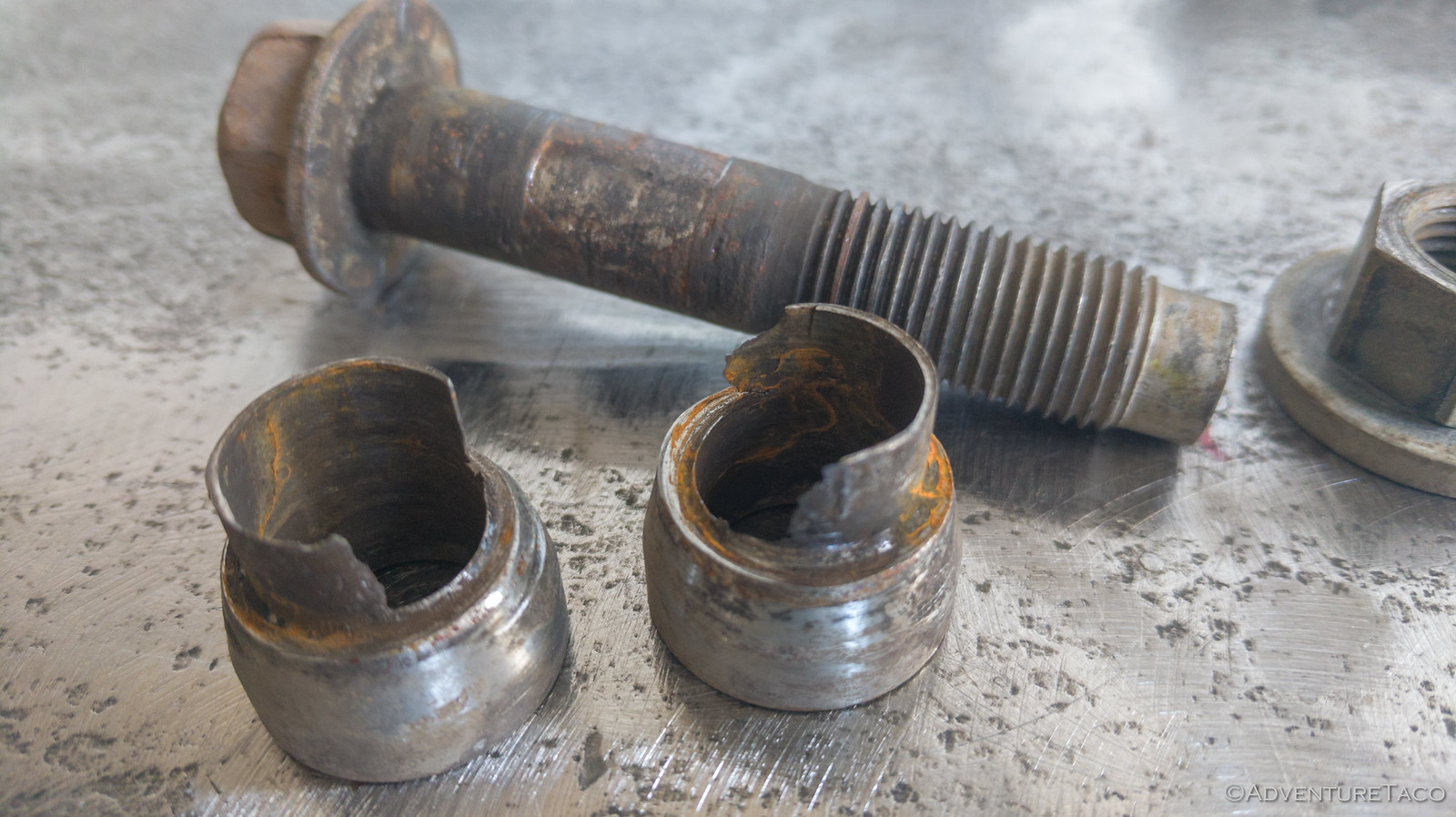 Today was going to be an easy day working on the truck. I knew what I had to do and it wasn't hard. I'd gathered the parts I needed - twice really, since the first time I tried to do this work, I found that I needed some additional bits that I thought I wasn't going to be replacing.

And unlike some of my more advanced projects, I had all the tools for this one already.

The process is essentially this:

I figured 90 minutes to two hours would be plenty - since, for me, pulling the shocks means a bit of acrobatics to get the resis off the top of the frame. A great way to spend the day before Thanksgiving.

Getting the shocks off the truck was no problem. I've learned that the easiest way to do this is to remove the wheel, then remove the four bolts that secure the lower ball joint (LBJ) to the lower control arm (LCA). This allows me to pivot the spindle, hub, and brake assembly back toward the rear of the LCA and makes it easy to remove the shock from it's mounting positions. Soon enough, the shock was out, and I was staring at what can only be described as a mutilated mess.

Not only were my spherical bearings toast, but the misalignment spacers were almost no more. They'd worn completely through, and the lower shock bolt wasn't in much better shape - a groove worn all the way around it where the spacers had been. 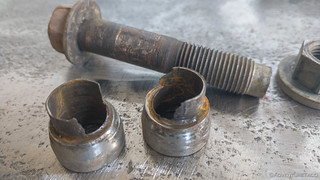 I knew this was going to be the case however, and I'd ordered a bunch of spherical bearings and misalignment spacers from Tyler at ADS before getting started, so I continued on - unphased. That is, until I ran into a little problem on the driver side. The eye of one of the snap rings had broken off at some point - while in service on the truck - and I had no replacements, since I never would have expected these to break. In fact, it's still perplexing to me, though you can see the wear on the shock eye as well! 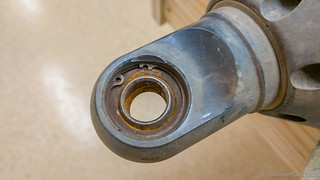 At any rate, I found the correct size snap rings at a Napa - but not my local one - and that left me no choice but to go pick them up...except that the truck was positioned about 12" into the garage, so I couldn't close the door. Not wanting my tools to be "ripe for the mooching," while I was gone, my only option was to move the truck - which was on three wheels at the time - first, so I could close the door. This was a sketchy procedure, since a floor jack was holding the front of the truck up, and the plan was to back up slowly and have the jack roll along the ground.

With @mrs.turbodb watching the jack to make sure the truck wasn't slipping off it, I slowly backed up. Despite what you might be thinking, this went just fine...until I got clear of the garage. All I had to do at that point was take the truck out of gear - but instead, I let up on the clutch!

The truck jumped - as it tried to stall. @mrs.turbodb screamed. I pushed the clutch back in as quickly as I could. To give you a sense of how quickly this happened, the truck did not stall. At this point, @mrs.turbodb was freaking out. She was 100% sure the truck was going to fall - it was supported by only the last ¼" of the top round surface of the floor jack. Luckily, I was able to slowly exit, and then get jack stands under the frame (and skid) so I could lower, and then reset, the floor jack.

It was a very close call to a very bad situation. 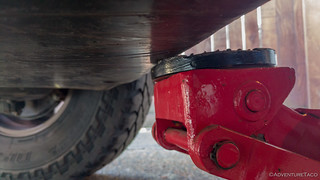 Returning from Napa - snap rings in hand - the rest of the process was once again straight forward. The first order of business was to remove the old snap rings, which my Channellock Snap Ring Pliers did a great job with. 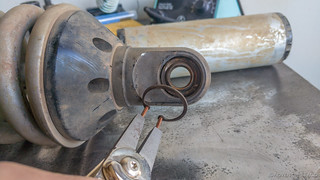 Next, I figured that even if it was overkill, I might as well use the shop press I'd purchased for replacing my rear axle seals and wheel bearings to push out the spherical bearings. I'm sure I could have just as easily used a c-clamp or vise for this procedure. 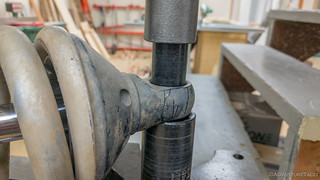 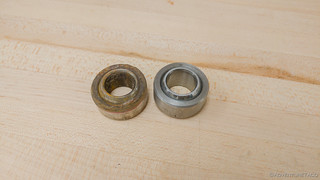 The old bearings removed, I installed one snap ring, pressed the new bearing into place, then installed the second snap ring on the other side - easy peasy lemon squeasy as @mini.turbodb would say. 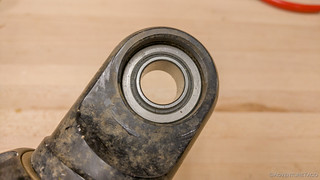 Finally, it was time to button everything back up onto the truck. I'd also purchased new lower shock bolts (90080-10124) (ebay) since mine were so chewed up, so those went in and were tightened to the proper 101 ft-lbs that Toyota specs. The three upper nuts were tightened to 47 ft-lbs, and then I used a 14mm socket to snug up the four LBJ bolts to their specified 59 ft-lbs. I was nearly there. All that was left to do was throw the wheels back into place, 89 ft-lbs on each of the lug nuts. 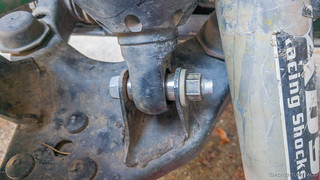 Whew. Crisis barely averted, and now the shocks are ready for another year of wheeling. Next year, I'll probably have to rebuild them.

Post-Mortem 1: So Why Did My Misalignment Spacers Disintegrate?

So, you may take a look at my misalignment spacers and think to yourself - as I did - holy s#!%, what happened there?! Here's my theory.

I've had the ADS shocks installed for the last 27K miles (and change). And those weren't the easiest 27K miles given the way the truck is used. Still - I don't think those 27K are what caused the problem - or at least, they didn't start the problem. I think what happened - though I don't know for sure - is that the original OEM bolt got worn over the first 100K miles when I had the OEM and then Toytec BOSS coilovers installed. Both of those are of the metal-sleeve-in-a-rubber-bushing design, and my theory is that such a design allows for a bit more play between the bolt and sleeve. When I ultimately moved to the ADS setup, I didn't really check the condition of the 14MM bolt beyond simply making sure it was straight and that the threads were in good shape. I didn't even consider the fact that smooth part of the shaft being worn would be any sort of problem.

Of course, wear there is a problem - because loose parts wear faster - and so I think that initial wear (from the shocks-with-rubber-bushings) caused even more wear on the bolt and misalignment spacers. This wear was perhaps even faster - since there was no rubber to absorb the impacts. You can see the result of the 135K miles worth of wear on the bolt in my photo above - there's a nice groove where the misalignment spacers have worked their way into the steel (and perhaps the metal sleeves from shocks pre-ADS).

Am I sure that's what happened? No. But I'll be keeping an eye on everything now, since I've got new everything in place, and so theoretically I shouldn't see the same thing next time.

Post-Mortem 2: Why the Sketchy Floor Jack Move? You Dumba$$!

I didn't think of it being quite as sketch as it ended up being when I started. As it was, the jack stayed under the skid the entire 12" I needed to move, just fine. In fact, we all know that the jack routinely moves under a vehicle as you lift the vehicle - it has to roll on it's wheels in order for the arm to remain in position on the bottom of the vehicle. This works because the friction is way greater where it contacts the truck than the friction between the wheels and ground.

It was the screw up at the end - where I wasn't paying attention to order of operations with the clutch - that almost cost me.

My other option - to move the truck those 12" so I could close the garage and go to the parts store - would have been to reassemble the front end. That would have meant reattaching the LBJ and reinstalling the wheel - so I could lower the truck onto the bump stop (since there'd be no coilover to hold the load) and then back up. Once I got the new parts, I'd have to reverse all that again to reinstall the coilover. I was trying to shortcut all of that work.

Published in Tacoma Maintenance; experienced on 2019-11-27