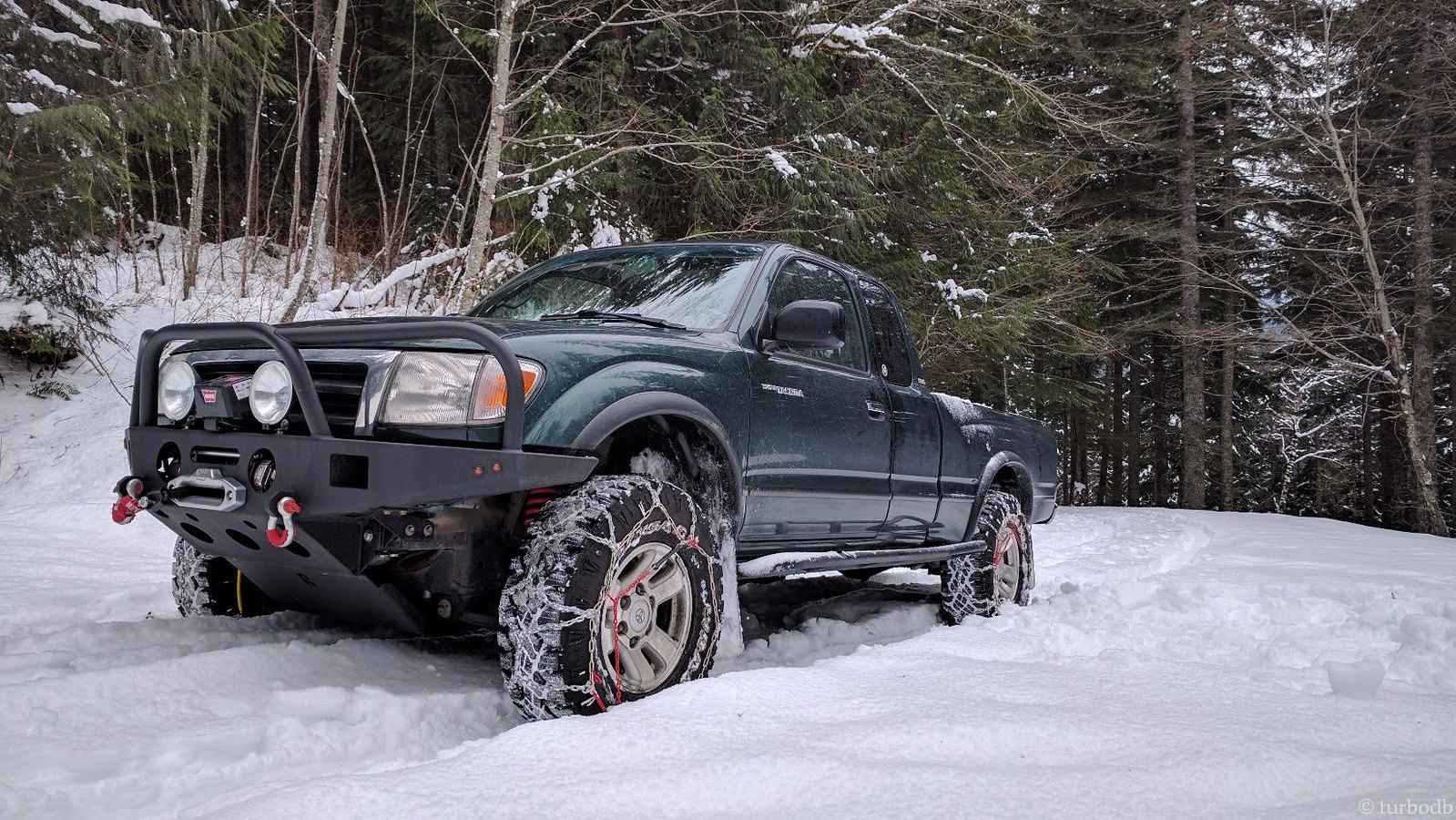 Christmas Tree, Sledding, and Recovery…Oh my!

Cutting down our own Christmas Tree has become a tradition in the last five years or so. We've got our favorite place to go (▮▮▮▮▮▮▮  off I-90 by Snoqualmie Pass), our favorite species of tree (Hemlock), and our favorite "dinner after" (Mexican).

This year, only "dinner after" happened as planned.

We've had colder than usual weather in the Seattle area for the last two weeks (highs in the low 30's), so we knew that there was a good chance we'd see a lot of snow on our hunt this year. But it's been clear for the last few days and it was projected to snow on Sunday, so we headed out Saturday morning with high hopes of scoring the perfect tree. We arrived at our exit (▮▮▮▮▮▮▮ ) around 10:30, and it was immediately clear that this was not going to be a snow-free trip.

Half a mile up the road there's a nice flat spot where some high-voltage lines cross, and we pulled over there to chain up. While I got chains on all four tires, @mrs.turbodb and @mini.turbodb broke out the brand new sled we'd picked up on our way out of town and gave it a go on a few of the hills around. As you can imagine, it was a hit with the six-year old.

We then continued up ▮▮▮▮▮▮▮ , sure that we were on our way to success, happy to be back in the truck and out of the 24 degree snow.

It soon became clear that this year wasn't going to be like any previous year. The snow had a different composition - a mix of light powder sandwiched between some firmer under-layers - so traction was terrible. We didn't sink down to the ground or even completely compact the snow - and so even with chains and Duratracs we had a hard time getting any purchase. In fact, after taking a look at the chains when I took them off later, it was clear that they were doing way less than they've done in the past - the knobbiness of the Duratracs tended to swallow parts of the chains!

We struggled along about a mile (if that) of virgin snow to the junction with .▮▮▮▮▮▮▮  During much of this mile, @mini was bawling in the back seat - she's just so used to the truck going everywhere with relative ease that she was sure that she "was going to die."

While we weren't going to get a tree, we definitely weren't going to die. With all the nice powder we decided to get the truck turned around. I jumped out and grabbed the sled, and heading further up the road. While @mrs.turbodb helped the kiddo get her snow gear back on, I took a couple runs down the road to make a track…or in my case, several tracks, each ending in a wipeout. 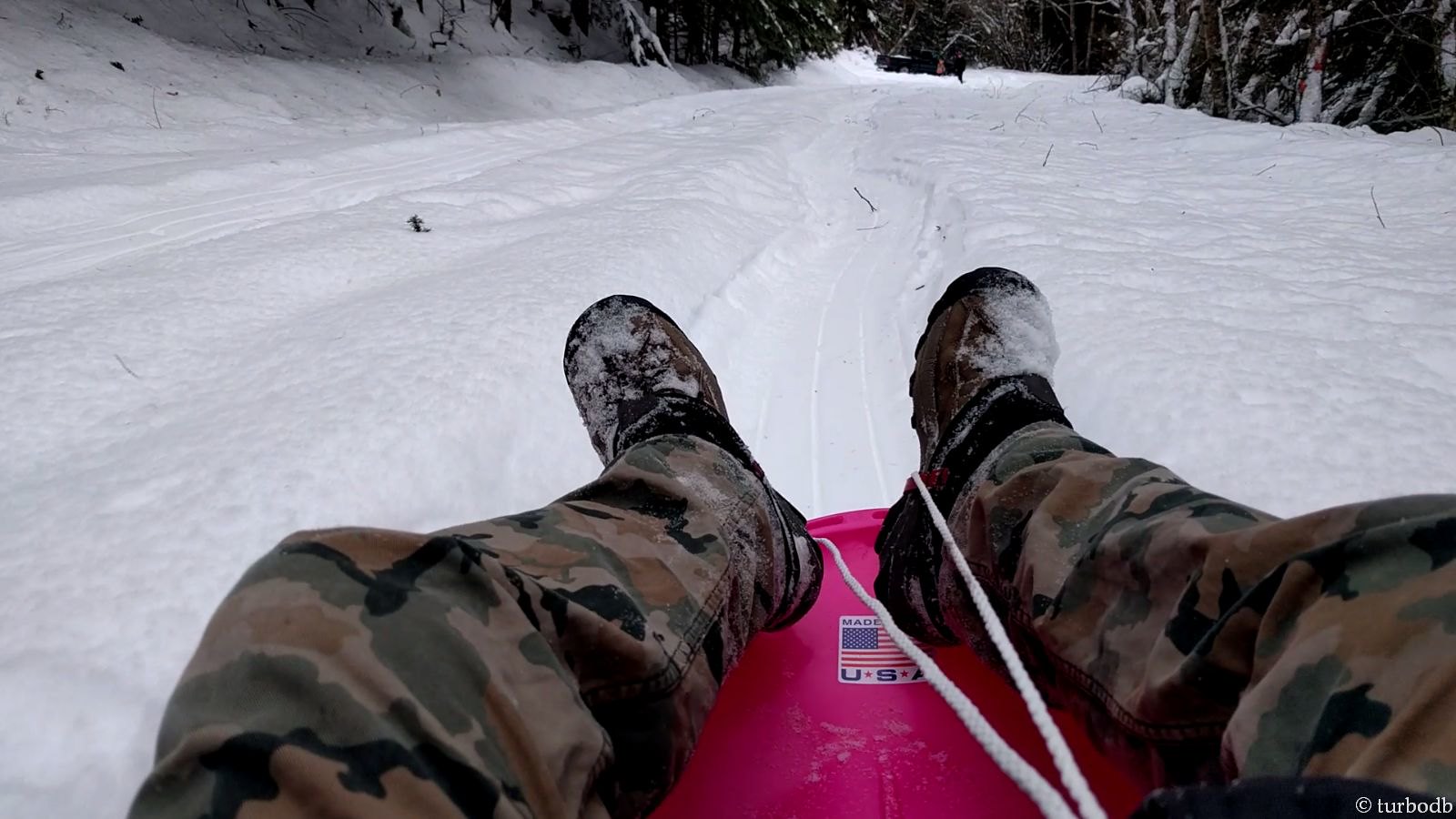 Of course, my wipeouts were nothing but excitement builders for our little one, who was now over her fear of imminent death-in-the-snow and eager to get her turn on the sled again. So, we headed back up to the top and both piled in to the sled together.

This would be our only run, as the obligatory wipeout at the end, while funny when it happens to someone else, is apparently cold and tear inducing for a six year old. She and I had a little talk after that about how that's just part of playing in the snow - you get a little wet and a little cold, but you have a lot of fun and warm up again after. Plus I told her, we can let Momma go now, and throw snowballs at her as she passes by.

That brought her spirits right back up. 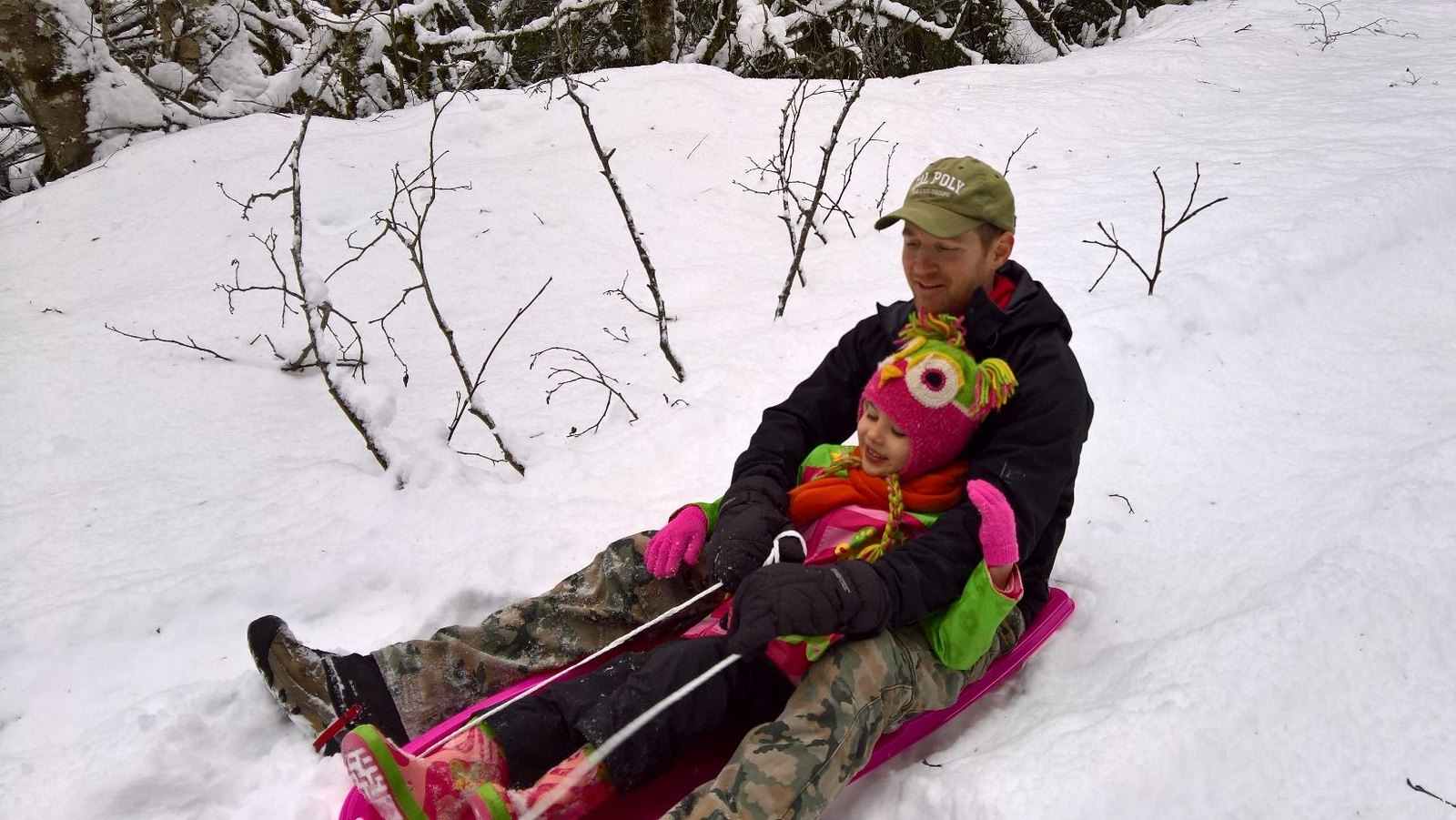 So, we took turns sledding down, eating snow and having an all-around pretty great time for about an hour. The kiddo even timed a powdery snowball perfectly as @mrs.turbodb and I sledded past (quickly) and nailed Momma in the face - I was glad that she was in front on that run! 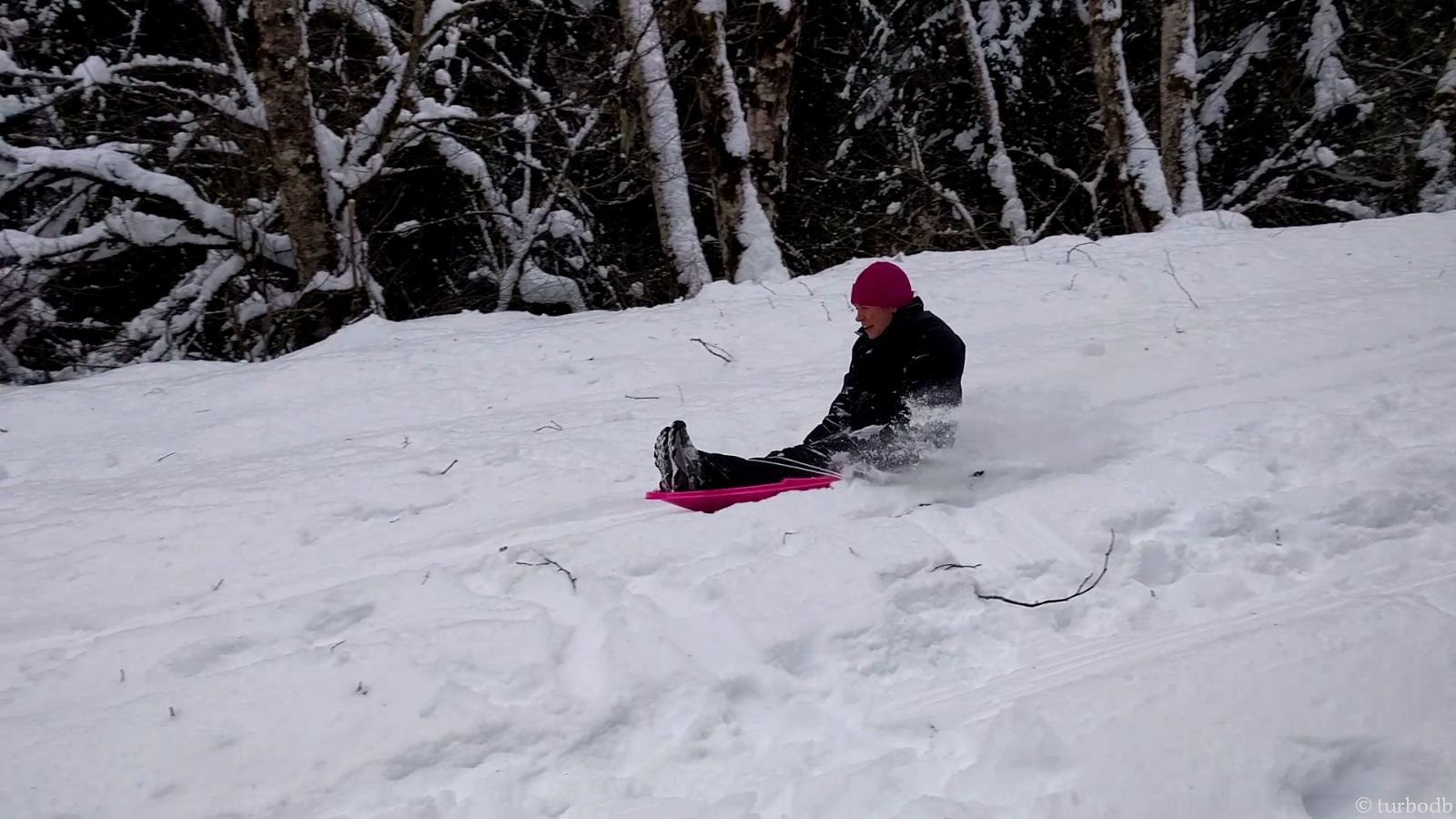 After raising our spirits a bit, I suggested that we head a bit further east to FS-9030, where I knew that there were a couple roads that could be more heavily travelled and so might have either less snow or at least more packed snow. So we piled back into the truck and headed out (removing the chains as we neared the freeway).

FS-9030 was a much more popular location - there were a dozen or more cars parked along the sides where the snow became deeper - but we forged ahead. Along the way we passed several hikers in snowshoes, most of whom were surprised to see a car, and a few of whom asked for a ride. We continued as far as we could - basically to the point where it was clear that the snow wasn't getting any shallower, and the trees weren't getting any more plentiful.

So at that point I started looking around for the "story tree" - you know the one, the tree that looks kinda sad, but that has great story behind it.

I found it - a 15-footer, 100 yards up a 45 degree slope off the road, in waist-high powder - thank goodness I was crazy. So I headed up, leaving @mrs.turbodb looking after me muttering "this seems insane, but not unexpected." 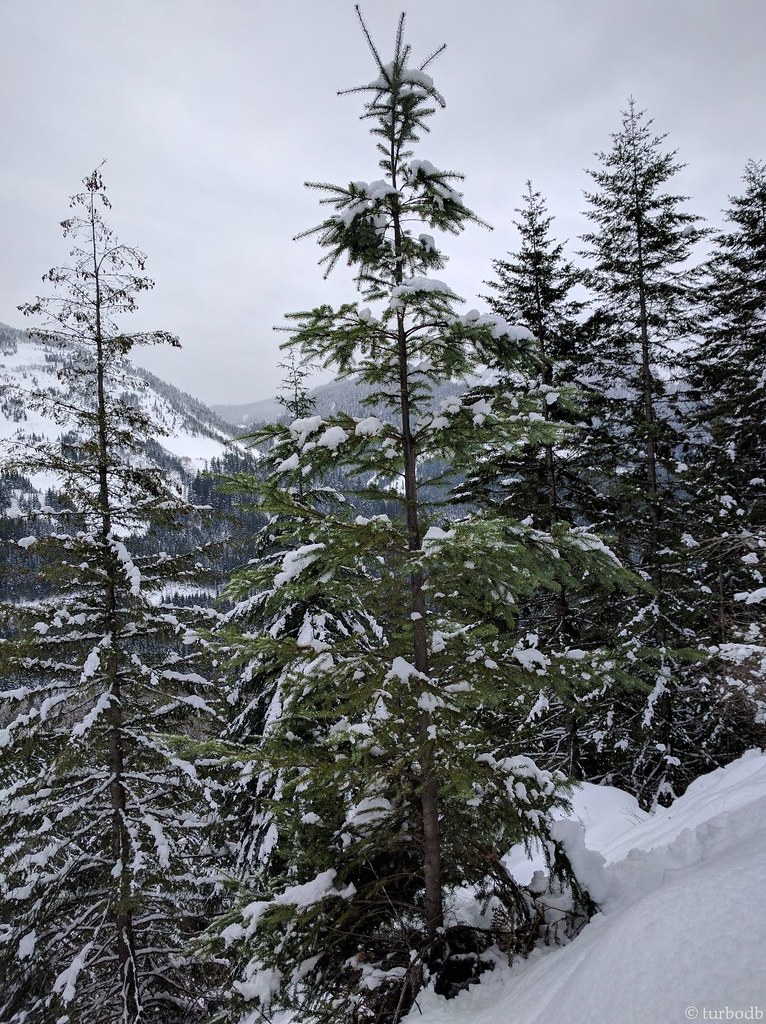 Tree acquired I headed back down to the truck and got loaded up. And then we headed back, trying to decide what we were going to have for lunch, now that it was going on 12:30 pm. 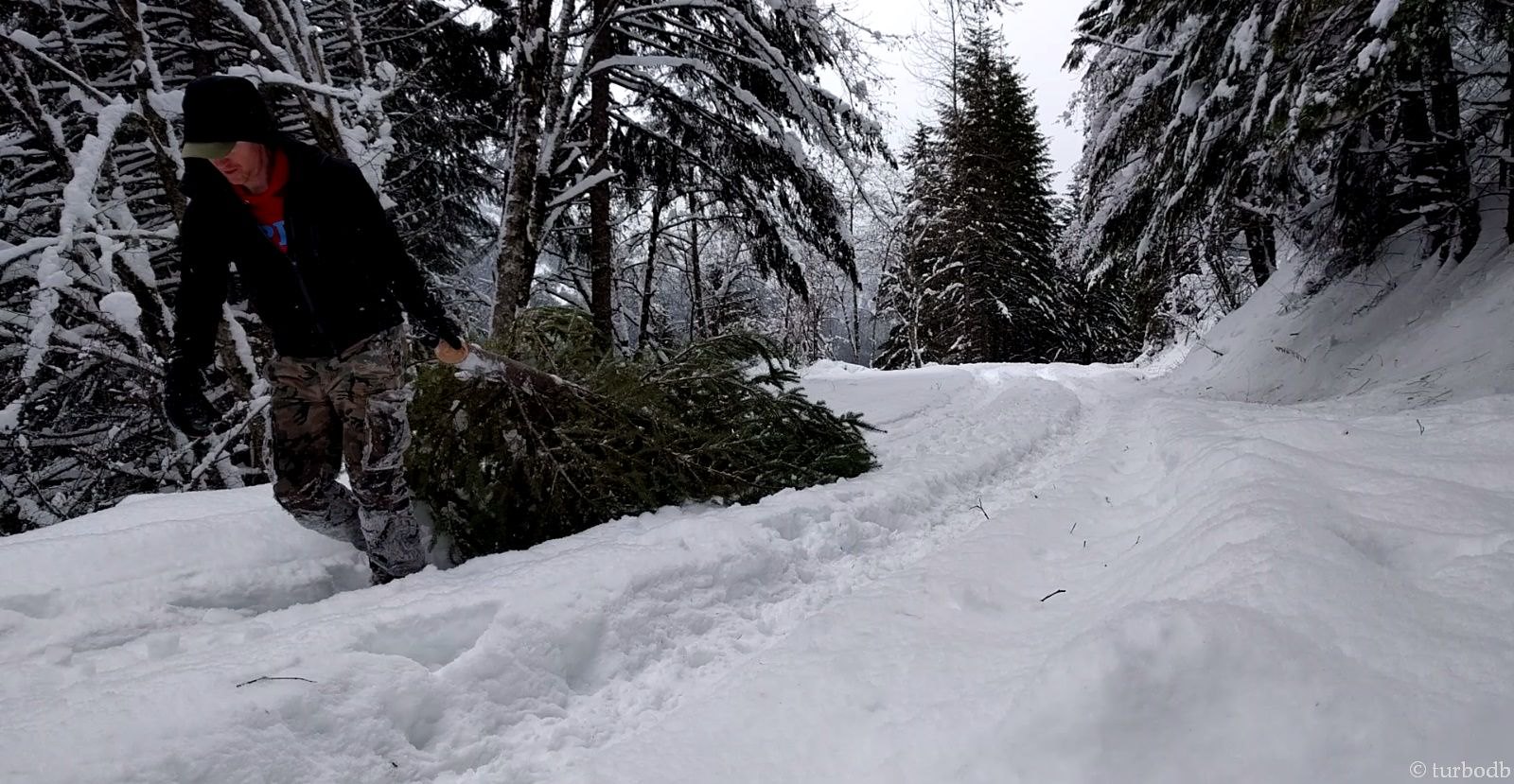 It turned out, we were going to skip lunch.

As we neared the head of the road, I could see a Tundra with the passenger side in the ditch. Without as much as a shovel, and with 20" rims and matching slick tires, they were going nowhere fast. So when we pulled up and offered to help, they were understandably grateful. 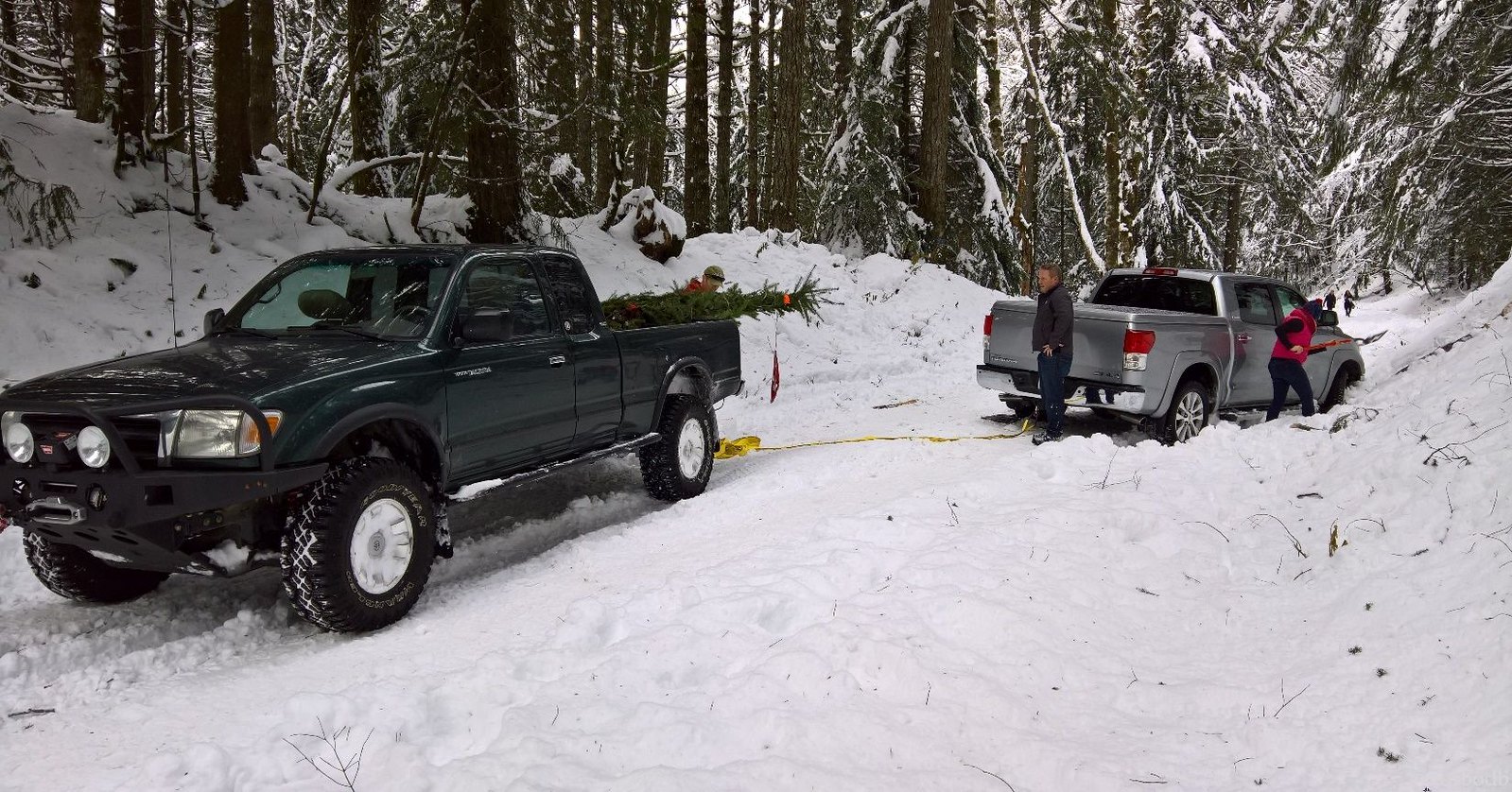 We got out the shovel, the tow strap, and D-rings and hooked up, dug out, and pulled. And, while the Tacoma was able to drag the Tundra along, we just couldn't get the front tires to purchase on the frozen edge of the ditch. It was time for plan B: pull from the front to get them back up in the middle of the road.

So we re-positioned, strapped, and dug and this time we were successful - the Tundra was back up on the road, but was still pointed the wrong direction (up trail) and we were now trapped further up trail. Great. 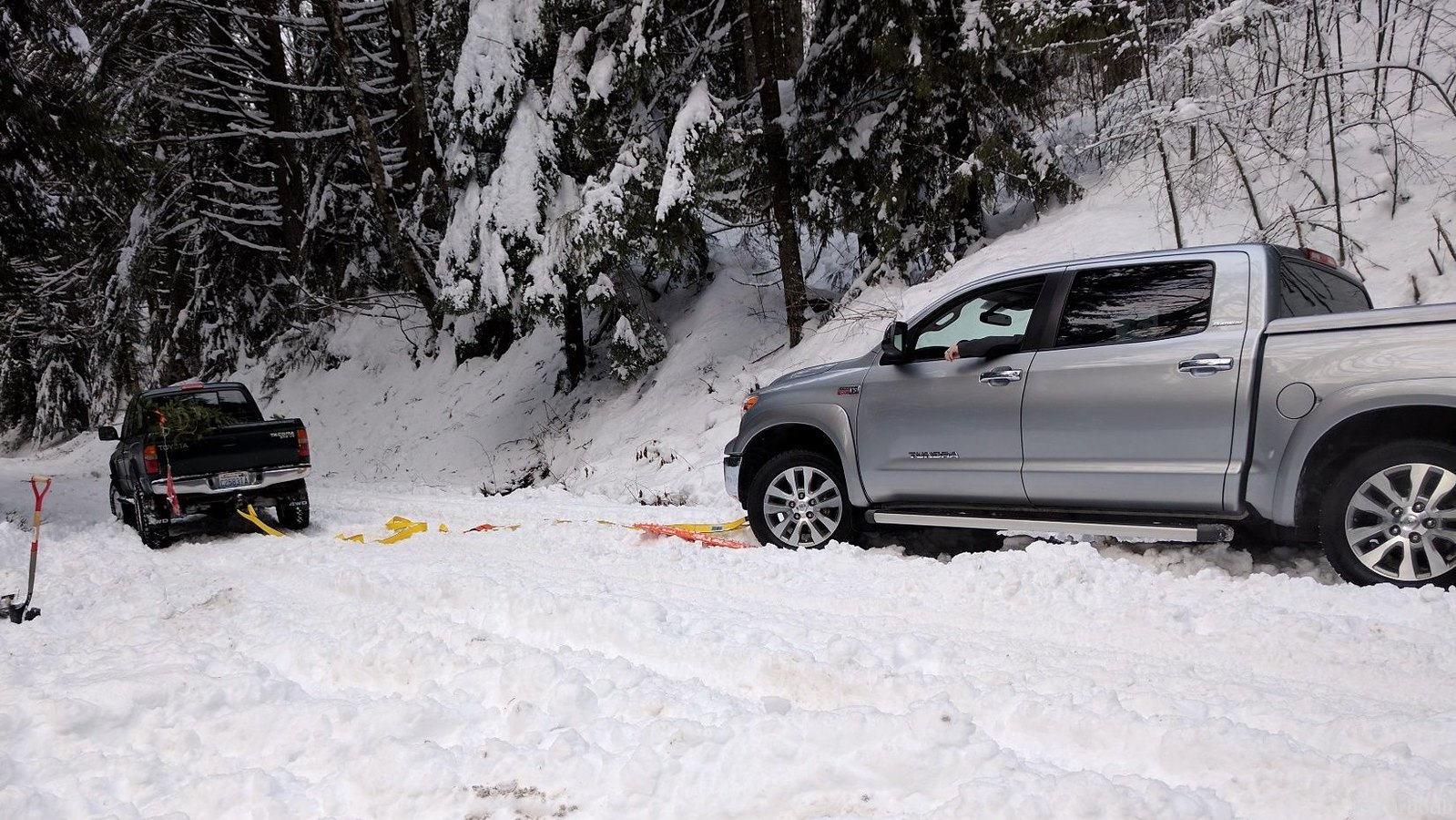 About 50 feet later, he was stuck. Again. At this point, @hobbs36 and I could scoot around, and we did. With @hobbs36 between us and the Tundra, we decided that we'd take the tow ball off my truck and put it on the Tundra to pull him further down the trail towards more solid ground. It worked well, and a hundred yards later he was able to back up under his own power.

But we weren't out of the woods yet.

As we caravanned down the remaining quarter mile to the head of the road, the owner of a Jeep Wrangler sporting some spiffy slick street tires thought it would be a good idea to try and get out before we passed. He immediately got stuck and I wished I'd brought along a few of these cards for him:

As we got him and another tractionless VW out of the middle of the road, there were many thanks and smiles and waves as @hobbs36 aired back up and I put away all the recovery gear and got ready for the trip back to Seattle. 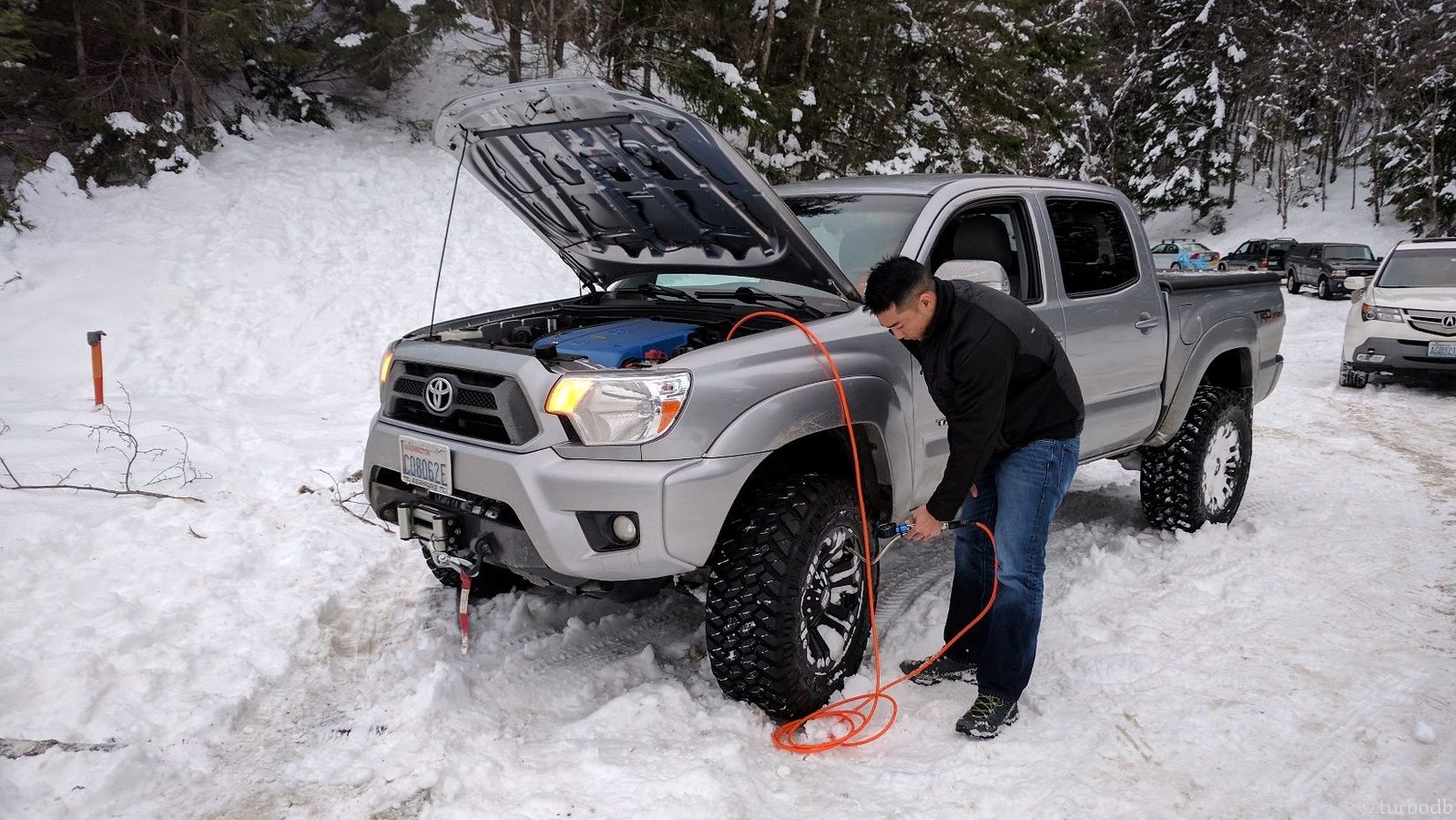 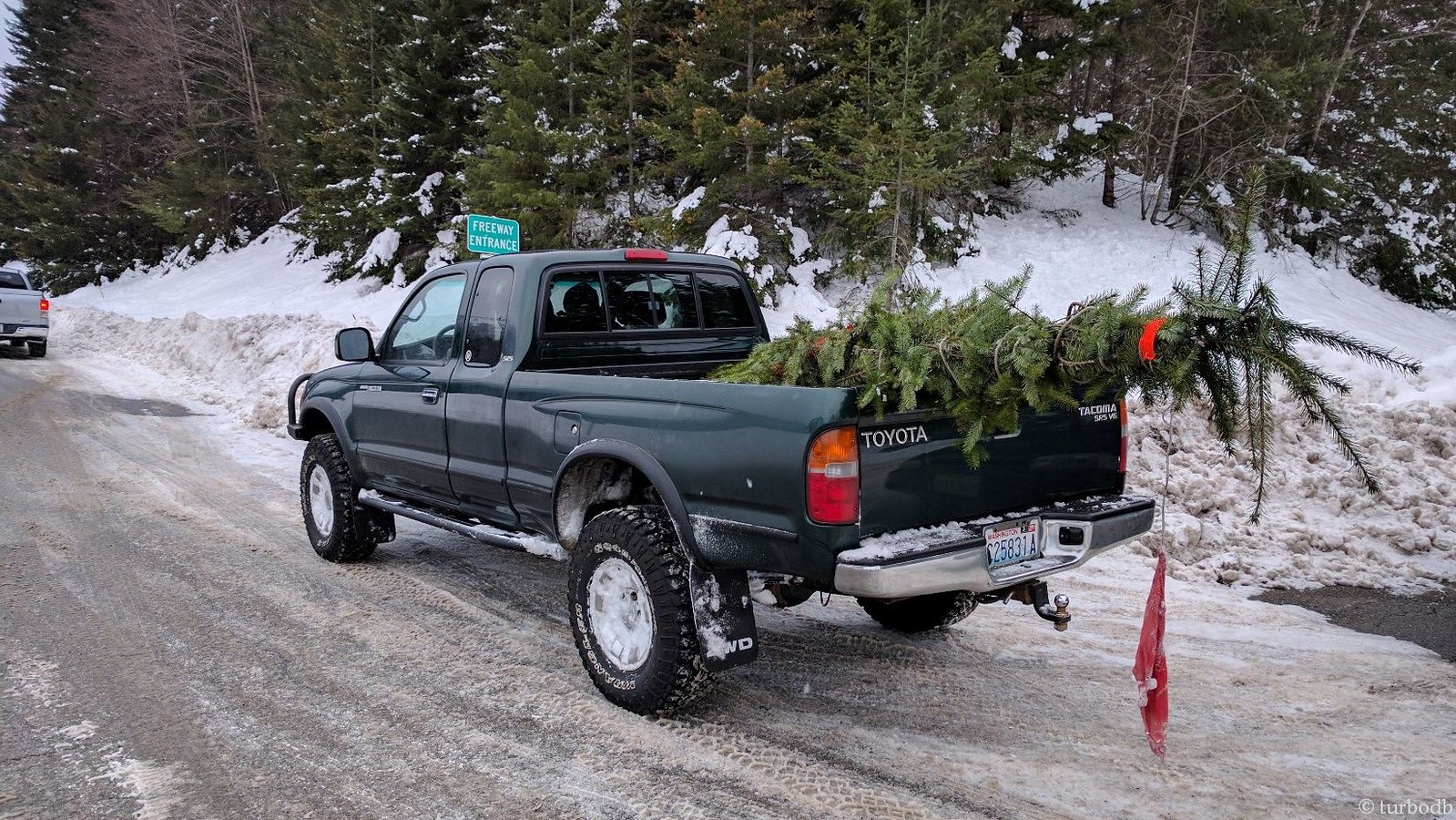 It was 3:45 pm, we'd missed lunch, and we were hungry. The day hadn't worked out quite as planned, but we had a tree and plenty of stories to go with it. Merry Christmas!