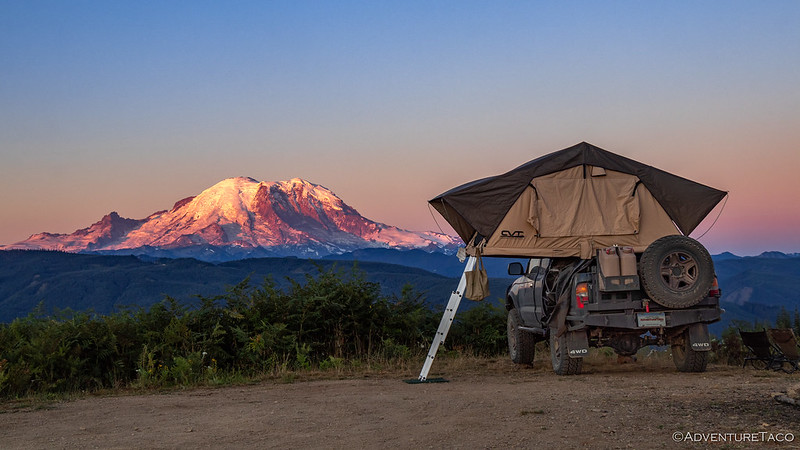 Part of the Roaming Around Rainier (Aug 2020) trip.

Well, I've got to say, we could really get used to this whole, "camping in perfect weather with great views" thing that we had going on. For the third night in a row, it was somewhere in the high 50°Fs to low 60s, with only a slight breeze, clear skies, and well, Mt. Rainier in the distance.

With no clouds to our east and Mt. Rainier to our west, I didn't really see any need to pull myself out of bed for the pre-sunrise time where an orange glow on the horizon can turn into a fiery sky. Instead, I set my alarm for a few minutes before the sun hit the horizon, and was rewarded with that nice pre-sunrise glow that seems to melt over the land. 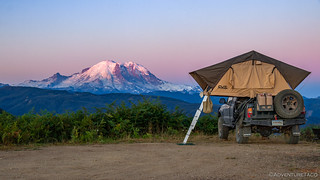 And then, the sun came up. 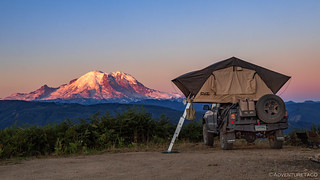 Unlike the previous few days, our plan for the day was to get in a nice hike - to the top of Kelly Butte, and the fire lookout located there - and then to drive over to the northwest side of The Mountain in order to see if we could find a camp site with a little different perspective than we'd had so far. That meant higher speeds on reasonably graded Forest Service roads - and that earned a a big

First though, we ate breakfast and broke down camp, and watched as few guys get on the next hill got ready to head out on their dirt bikes. Each one of them had brought their own bike, the most interesting being the bike mounted on the rear bumper of the Mercedes sedan. Smooth operator. 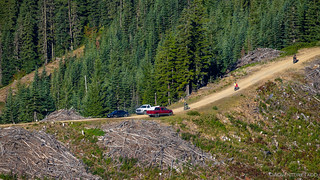 As we were putting away camp, a pet peeve of mine finally overwhelmed me. It'd been bothering me since we'd parked the night before, but I'd been successful in ignoring it, but after finding a live round, I just couldn't let it go. 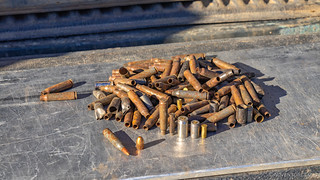 Why am I picking up after you? Show a little respect.

After deciding we were done and taking a photo, we ended up collecting about the same number of shells again from this one camp site - 6lbs in total when I got home and weighed them after removing the dirt inside.

That dampened our mood a bit, but we felt better for leaving the site cleaner - at least for a while - than it'd been when we arrived. And, we knew that a beautiful hike was in front of us, so we pulled out of camp and pointed the truck north for the few miles it'd take to get to the trailhead. There, I setup the solar panel - mostly because it was a new toy to play with - and we set off up the trail. 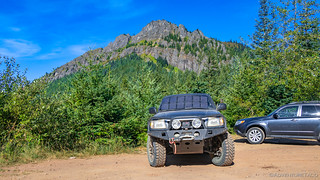 The hike up Kelly Butte to the old fire lookout is 3.4 miles roundtrip with the first half mile or so being super easy and along an old logging road. This section terminates at a logging platform with tremendous views of Mt. Rainier. 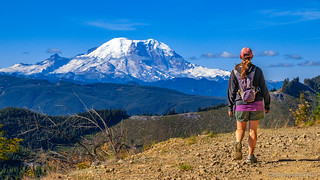 You may wonder - as we did - why the drivable road doesn't go all the way to this platform, since even a standard clearance vehicle would surely make it. I wondered about this for much of the hike, and finally realized that it likely has to do with keeping that platform "nice" for those who want to enjoy the hike, and avoid folks who might "forget" to pick up their shells after using it as a shooting platform. So yeah, thank you trail planners!

From the logging platform, the trail to Kelly Butte changes dramatically. Short switchbacks lead up the steep hillside, some of them more of a scramble than a trail. Of course, those same steep drop offs made for more spectacular views much on the way up, and we paused several times to soak them in. 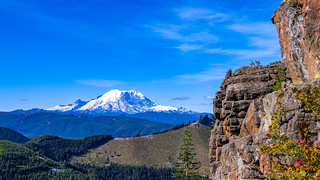 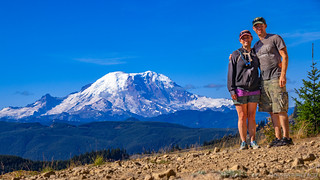 Stop the presses, both of us and no trucks in a photo! 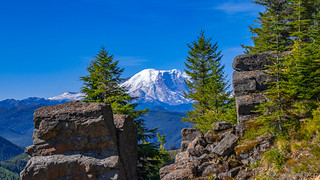 After a mile of up, the switchbacks stop and the trail climbs through a series of mountain meadows, their floors covered with thousands of huckleberry bushes. We ate a a few - though not nearly enough - on our way up, as chipmunks scampered here and there. 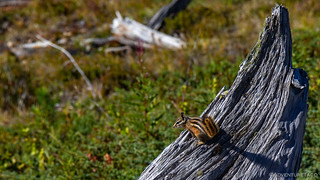 And then, a little over a mile-and-a-half into the hike, we got our first view of the lookout. Perched at the apex of the butte, it's no longer in service; and while it was a bit of a bummer to not see inside, we still enjoyed the exterior and it's surroundings as we approached. 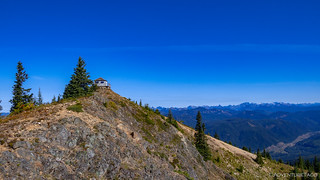 But the real reveal came once we got past the lookout and were able to look back. Then, with Mt. Rainier rising in the distance, we really got a sense of how amazing it must have been to be a staffer in this location. Even though it would require a bit more of a trek than some of the other lookouts we've visited, waking up to a view like this ever morning was probably worth it! 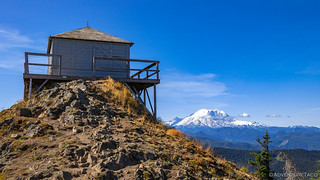 Perhaps because it was reasonably early on a Thursday morning, we had the place to ourselves, and so spent a few minutes just sitting around taking the whole thing in. We weren't alone in that regard - a family (?) of chipmunks sprinkled around the lookout were also quite attentive to their surroundings. 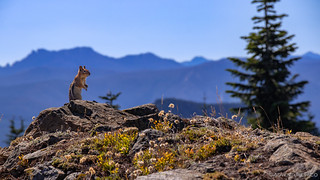 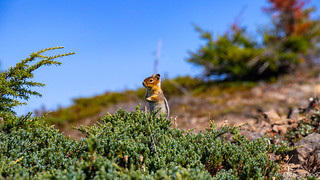 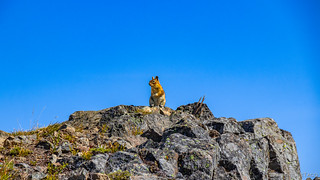 I'm not sure what I was doing, exactly - perhaps capturing the chipmunks - but at some point, @mrs.turbodb called be over to show me a heaping handful of huckleberries that she'd plucked off of a single plant. Big and juicy, I was lucky enough to get half of them, and I stuffed the entire bunch in my mouth at once! 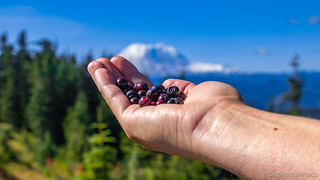 It was - as far as I can remember - the first time I ever ate an entire handful of huckleberries at once, and it was sublime. Seeing my reaction, @mrs.turbodb did the same, and was similarly thrilled by the experience. As a result, we spent the next 20 minutes or so picking handfuls of the little purple flavor explosions and stuffing our faces. It was a hand-to-mouth operation.

We probably could have stayed there quite a bit longer, but it was getting on to lunch time and we made our way back to the trailhead - most notably passing a woman who was schlepping her pet rabbit up the trail in her backpack.

Once back, climbed back in the truck and drove a total of about 500 yards before finding a great spot to pull over and enjoy a third day of tuna sandwiches and jalapeño chips - a lunch that is sure to become a staple on our trips in the future. 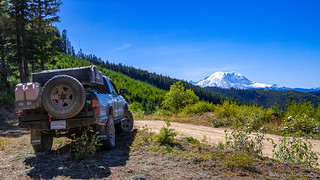 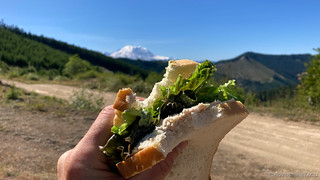 And from there, we made our way back out of the hills and down to WA-410, where we pointed west for a couple hours to the town of Wilkeson, and the head of FS-7710 where we hoped to find our closest site to Mt. Rainier of the trip. First though, we made a quick stop at the Wilkeson Coke Ovens. 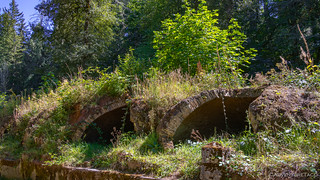 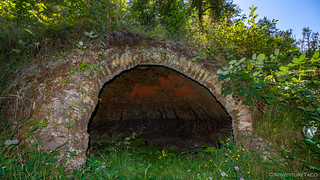 The ovens reminded me of miniature versions of the Charcoal Kilns that I've seen in Death Valley, and the history of them was quite intriguing.

Built throughout Pierce County in the early 1900's, the Carbon River Corridor mines shipped coke to industries in Tacoma, San Francisco, and Alaska. These specially designed brick ovens were constructed by Pennsylvania bricklayers with bricks from Scotland, and would heat raw Bituminous coal to temperatures high enough to burn off impurities. Loading of the ovens took place through an opening at the top of the oven, and then a fire would be started through the side door, which was then bricked over to retain heat. A burn would last 48-72 hours before allowing the coke to slowly cool and then be raked into waiting train cars for transportation to west coast centers of industry. Most of the coke ovens were dismantled by the 1930s, as coke was replaced by cheaper fuels. Of the 160 ovens in Wilkeson, only 30 "beehive" ovens remain.CarbonRiverCorridor.com

The ovens themselves aren't in great shape anymore, so we spent only a few minutes in the park before airing down and getting on our way. Even making good time on the maze of Forest Service roads, the nearest possible camp site was over 30 miles away, and would take us about an hour to reach. That is, assuming we didn't end up like this guy. 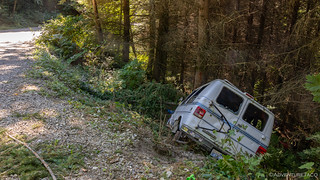 We checked, and there was no one in need of help here.

After about 45 minutes of reasonably boring pothole dodging, and about one mile from what I'd scoped as being a reasonably promising site, we turned onto the final road and were greeted by disappointment. 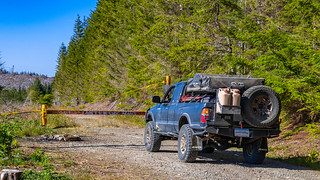 Par for the course when it comes to exploration.

With nothing we could do about it, we grumbled a bit and then reassessed the situation. There were still two more possible sites I'd marked on the map, but before heading back to those, we decided to investigate the main road we'd been following a bit more - because there was a chance that it might pop out to some pretty amazing views itself.

Even as we approached the end of the road on the map, we had high hopes - it looked like it might end with a fantastic view of Mt. Rainier. But then, as we pulled into the camp site, time - and tree growth - proved to be our undoing. 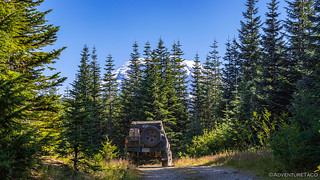 So tantalizing. "It's just a little chainsaw work," I joked to @mrs.turbodb.

Stymied, we headed back the hour or so to the fork in the road that would take us to the second set of sites I'd marked, hoping that our luck would be a little better the second time around.

It was, but not in the way we'd imagined. Rather, we were stopped in our tracks within about three-quarters of a mile. 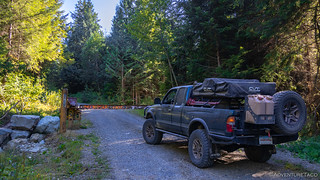 Now, at 4:45pm in the afternoon, we were in a bit of a quandary. With both of the areas we'd hoped to camp blocked off, it was time to decide where we wanted to sleep. Had we been somewhere else, we'd have likely headed out to find something that would just work. But here, we had another option - it was only about a two hour drive home - we could just head that direction and sleep in our bed after a nice shower.

So yeah, that's what we did. It meant one less night with a view of The Mountain, but we'd had a great time, and some of the best weather we could hope for. Not only that, but the entire trip was basically smoke free - something that cannot be said for the entire west coast, even as I write this story.

And, the view as we made our way home wasn't too shabby either! 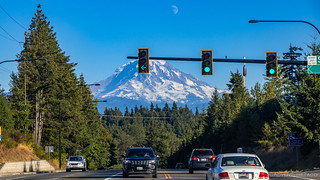 Thanks for reading and I hope you enjoyed the trip! By all means, check out some more and find your inspiration! 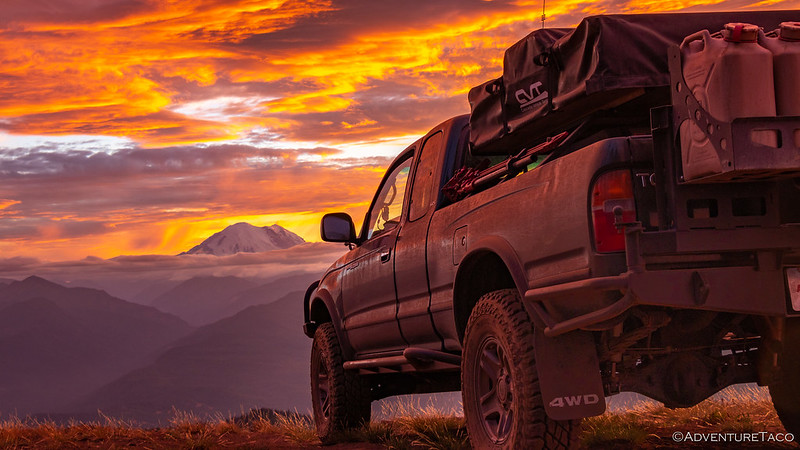 The Naches Trail - Roaming Around Rainier #3