Well, it's been a while since a rig review - things have been working reasonably well; a nice side effect of constantly evaluating and tweaking the setup of the truck to dial it in. Since last time, we've completed the following trips:

So, lets dive right in.

I looked around a bit for new tires, given that my ST/Maxx were on their last legs. I also did a bit more digging into why mine were so worn out, as I noticed that the fronts were worse off than the rears. Or rather, the current fronts were worse, as I've been doing a really good job of rotating on every oil change.

Turns out that my alignment was total crap, and I got that addressed just before getting a new set of 255/85 R16 Cooper ST/Maxx. These tires haven't let me down on the trail, and I really like the highway manners as well, so I decided to go with them again. If I could have found something in the 255/85 R16 size in a C-load (instead of E), I'd have gone with that, but I couldn't, so I'm sticking with something that works really well. After this last trip to the Naches Trail, I'm glad I did - I don't think I could have made it with my old (bald) tires. 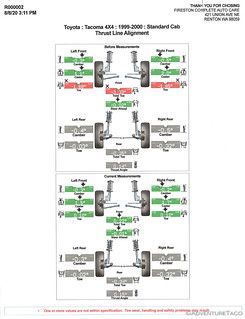 TL;DR - The mid-skid is now securely fastened to the frame again, nearly a year later!

I finally got around to putting a Rivnut in the frame at the rear driver attachment point, so I don't need to worry about the bolt there backing out. This was the last piece to making the mid-skid attachment more secure, so I'm glad to have finally gotten it done. I should note that I no longer run the mid-skid on most trips (to save weight), so I haven't really used the skid since the rig review where I noted it needed work. But I have another trip to Colorado coming up, and I'll need the skid for that ... so yeah, forcing function! 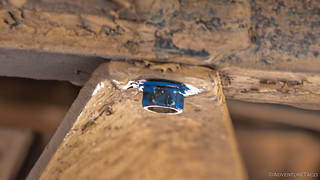 It's Noisy in the Cab (resolved)

TL;DR - I did a big sound deadening project, and it worked great.

If you haven't read about the sound deadening I did, you should check out the two-part story. The first part outlines Materials and Prep, and the second part covers Mat & Foam Installation. I couldn't be happier with the different that was made by the RAAMmat, especially when on the trail. It really is quite a bit quieter. 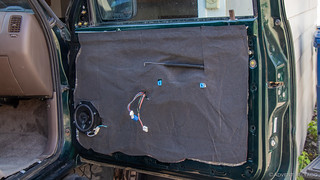 TL;DR - After cinching down the cover for the tent a few hundred times, the stitching for one of the buckles on one of the cover straps ripped out. I sewed it back together and everything is good again.

I think there was probably some very minor manufacturing defect in one of my straps that only reared its head after I used the strap a couple hundred times, since I inspected the other strap and it looks just fine. This is one of those things that some might feel like they needed to buy a new strap for, but fixing it is so easy - just a needle and thread - that I totally recommend doing this kind of thing yourself. 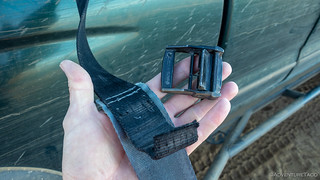 TL;DR - the A/C blew cold this entire trip and seems to be going strong.

After a couple attempts at fixing the A/C, ultimately replacing the evaporator core (and other inside-the-cabin components), the receiver/drier, and ultimately the compressor, I think the A/C is working now. I'll keep monitoring it over the next several months, and I have a new condenser and some Schrader valves on hand in case I need to replace those. 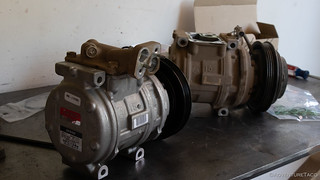 TL;DR - I don't really know what this is, but I'm going to keep monitoring it. Hopefully it's nothing.

A couple times during the last (Roaming Around Rainier) trip, when I opened the hood to connect the air compressor and air up the tires, I noticed that there was some sort of oily looking splatter on the timing cover. At first, I thought it might just be water from a puddle, but eventually I was convinced it was some sort of oil-based substance. My guess was that it was one of either power steering fluid or A/C oil from the work that I did on the A/C. After a bit more investigation when I got home, I've ruled out A/C oil, since it doesn't glow under UV light (and I added UV dye when I filled the A/C). I don't see power steering fluid leaking anywhere, but quite a bit of it leaked out of the reservoir and into various nooks and crannies, so I'm betting that it's finally just leaking back out and once it's done that, I won't have a problem. Fingers crossed. 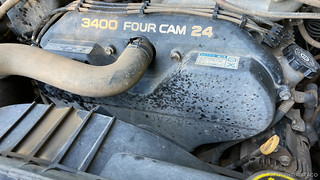