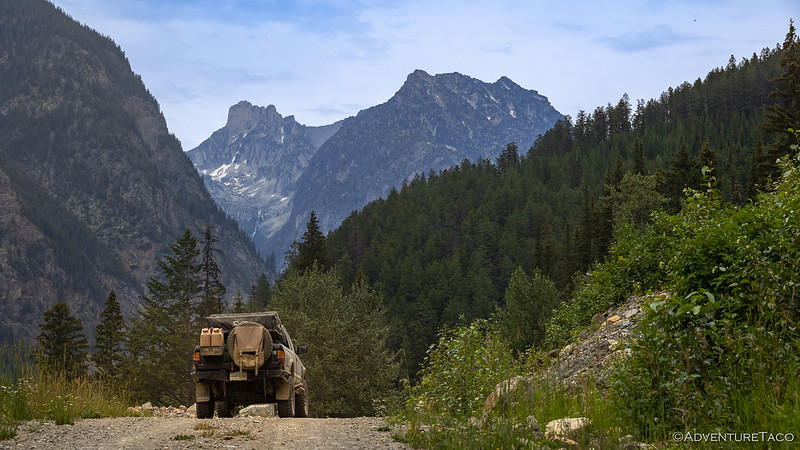 Part of the Me and Mike Climb into the Kootenays (Aug 2022) trip.

Having returned to Radium Hot Springs from our run up a glacier that was Hallowed Ground, Mike @Digiratus and I put a bit of fuel in our tanks. Prices had dropped 7 cents/liter in just two days, but I still used gas from my Scepter jerry cans, since I wanted to be sure to use up my cheaper "USA gasoline" before buying more than I needed in Canada, where prices were about $1.50 USD higher per gallon.

Filling our tanks didn't take long, and after a few more minutes of internet connectivity to ensure that everything was still OK on our home fronts, we opted for the paved route out of town - on BC-95, the Kootenay Highway - towards Invermere.

Our plan was to run up into the mountains to the town (?) of Panorama and the nearby Paradise Mine that I'd found as part of my route planning on Google Earth. At the time, I'd ended up mapping a route from Bruce Creek - that we'd explored the previous morning - up and over the ridge, but (Canada) Mike warned me that it wasn't a through road, so we decided not to try it when we'd passed it on our way to the old mining cabin.

Well, it turns out that we should have given it a shot because as soon as we reached the fork off of Toby Creek Road that went up to the mine, it turned out to be private land and a couple paramilitary looking guys came running out of Toby Creek Adventures to inform Mike that there was no way we were headed up that road. At least, not without booking an "ATV Adventure - a trip of a lifetime - starting at $259 apiece."

Luckily, our route continued up Toby Creek, where we were soon transitioning from pavement to gravel and enjoying some of the same views up steep canyon hillsides that we'd become accustomed to over the last several days. 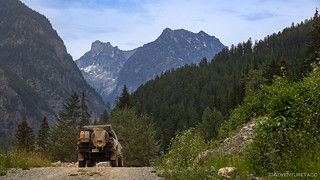 Here we go again. (And that's a good thing.) 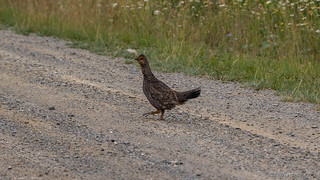 It was mid-day at this point, and as I found a wide spot in the road with a view of the mountains, I suggested we pull over for lunch. We were - after all - in no rush. 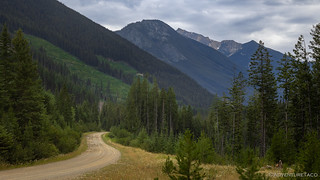 The winding road we'd follow once our bellies stopped grumbling. 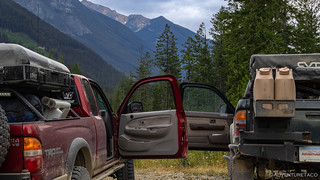 For a couple of guys used to closing doors for photos, we were getting a little sloppy near the end of the trip.

Lunch was a leisurely affair, high clouds, a nice breeze and some well-positioned trees providing much-appreciated shade on what had been a much-warmer-than-usual trip for us. Eventually though, all good things come to an end, and too soon we were headed further up the valley in search of the unknown - and a spot to camp for the evening. 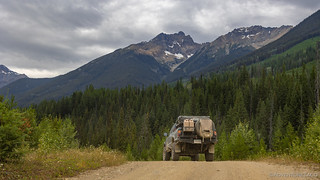 My fingers crossed, I hoped we'd find a trail away from the creek and up into the higher elevations again. My maps suggested it was a possibility...

Eventually we came to the end of Toby Creek Road and opted for a spur that continued on - for another 20km or so - to a promisingly-named destination: Jumbo Pass. "Seems like that might be a good place to camp," I suggested over the radio, though I was keenly aware of my love of plunging cliffs and Mike's preference for gurgling streams in... flatter...settings. Regardless, it was a decision that couldn't be made now, and so we continued. 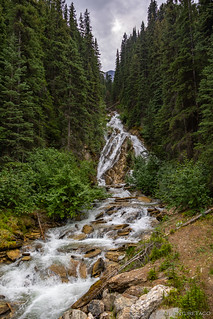 Waterfalls cascaded toward the road as we continued to climb. 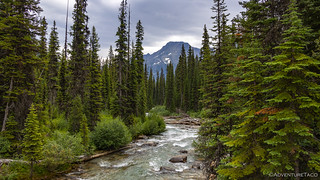 Fed by streams, rivers carried the meltwater down towards Toby Creek. 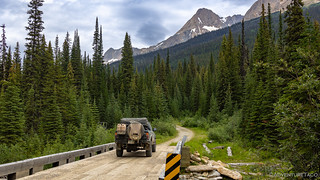 Bridges. With all that water, there were lots of bridges.

I'd ended up in the lead for much of this leg of our adventure, and after winding our way well beyond the end of the road shown on our GPS, I ran into what can only be described as the End of the Road. 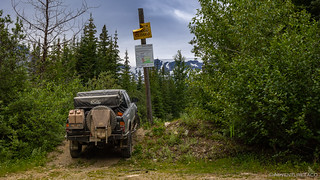 If the sign wasn't warning enough, I easily high-centered on the berm; we were going no further.

It wasn't always this way. In fact, there was a perfectly good bridge tucked into the willows along the side of the road (just out of the frame of my photo). It was as though a logging operation had planned to repair the washed-out bridge but hadn't ever gotten around to it. Or maybe they had, and once they were done, decided that it was better if these trails were reclaimed by mother nature. 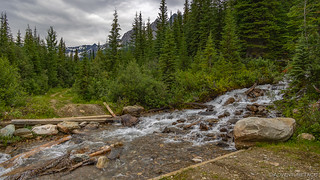 Crossing the creek wouldn't have been hard, if only we could make it over the berm.

A few minutes later, the rumble of Mike's supercharged V6 broke through the trees, and he pulled up behind me with a grin on his face. Turns out that for much of the trail he'd had a nagging feeling of deja-vu, and seeing this spot, it had hit him; he'd been here before - on the same trip where Ben proposed - exploring the roads in a similar fashion as we were today. "They were a lot less overgrown [back in 2016]."

With nowhere good to camp in the immediate area - we hadn't gained much elevation, didn't have great views, and were two hours further away from the highway for our trip home the next morning - we decided our best course of action would be to head back down towards Invermere and find somewhere along the Toby River to setup camp. 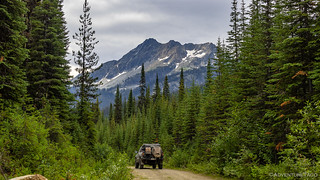 Back out we go.

It was right around 5:00pm when rolled into a place right along the side of the creek that we'd call home for the night. It wasn't the most private, but the river generated a nice breeze, and it was fun to watch as folks from the resort at Panorama floated down in rafts, the gentle current an apparent highlight of their time at the resort!

The only problem was that as the sun dropped lower in the sky, the stoooopid, sucking, miniature vampires began to swarm. It was bad. For a while - especially since it was our last evening - I suffered through it. Eventually, I couldn't take it anymore, climbing into the protected confines of my tent. 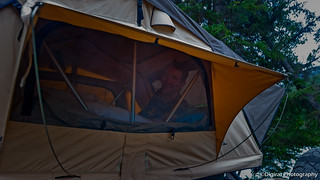 Luckily, that didn't mean the campfire was over. Mike simply moved it a little closer to my tailgate, and our conversation continued through the protective mesh of my rear window. It was unconventional but I appreciated it, enjoying the last few hours of conversation before we'd hit the road for the 12-hour trip home the following morning.

It had been rather unconventional as an annual trip goes - both in terms of length and number of trucks - but I have to say, this one had some highlights that wouldn't soon be forgotten, as Me and Mike Climbed into the Kootenays.