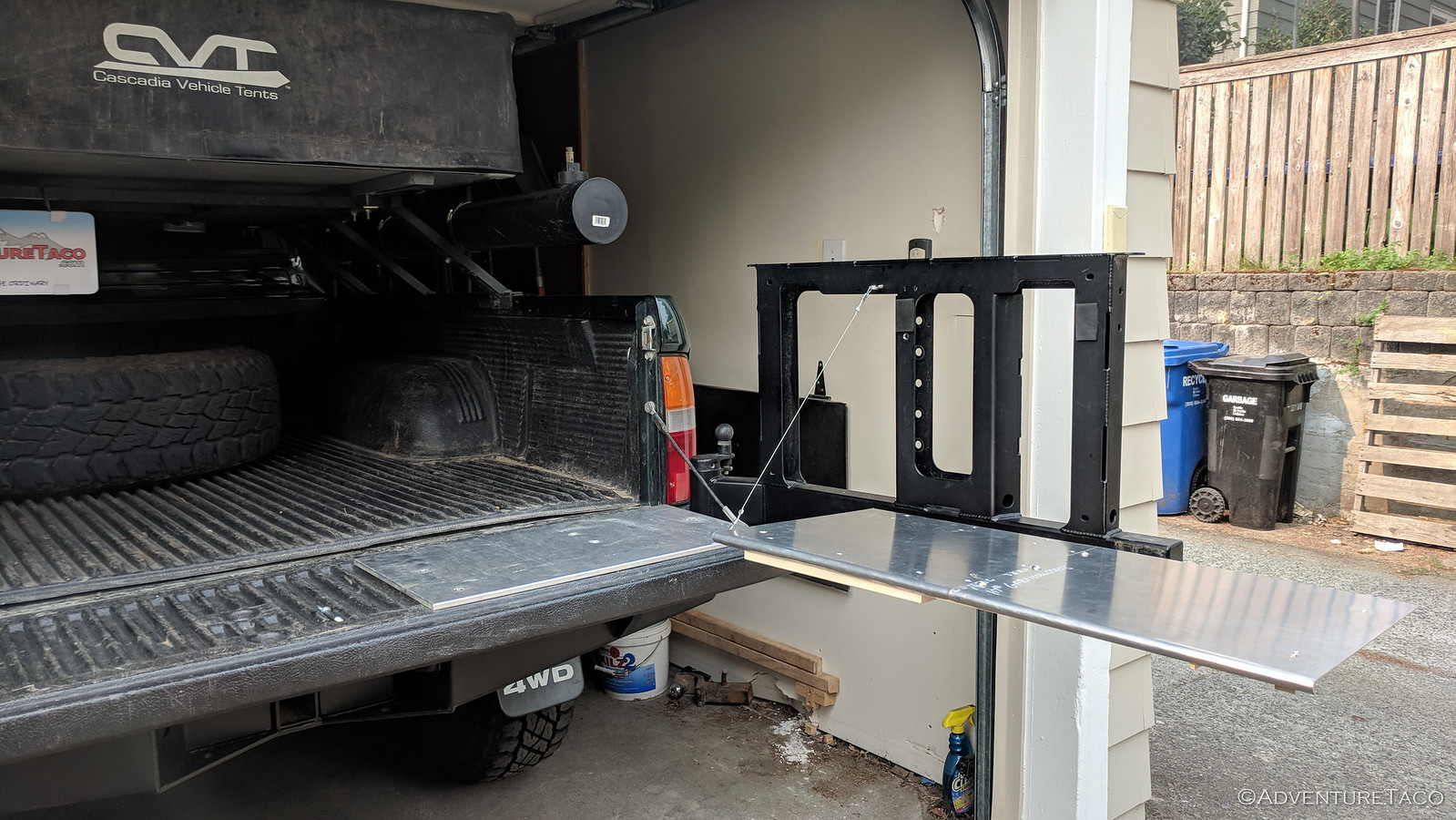 Fabricating a (Prototype) Table for the Rear Bumper Swingout

It's been about six months since I drove over to eastern Idaho to pickup and install the CBI Outback 1.0 rear bumper with dual swing-outs on my way down to The Maze in Utah. In that time, the bumper has performed well - I'm generally really happy with it, save a couple niggly things that I should probably write up as a "what do I think six months later," sort of post.

But, one thing that I've been missing - and knew I was missing when I purchased the bumper - was a fold-down table on the swing-out. This was a purposeful omission on my part - @cbi offroad fab wanted $350 for tables, and I knew I could do better.

So, it was finally time to get started.

My criteria were several-fold.

I started by taking some measurements of the passenger side swing-out when the tailgate was open. This showed me that I had 15-inches of width to work with - so the table wouldn't overlap the tailgate or interfere with the dual-swing-out latching. 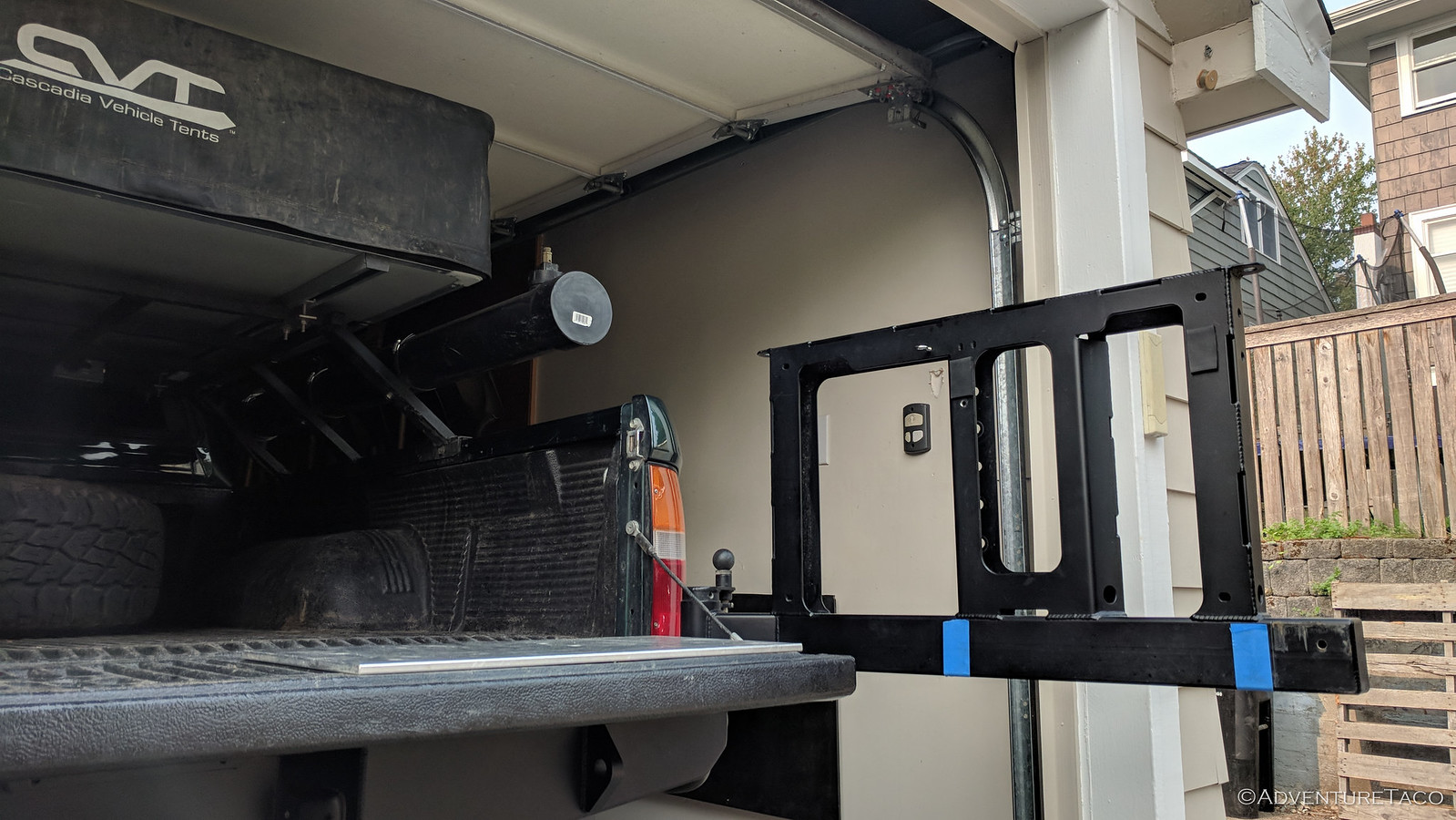 Clearly, not enough to fit the Coleman stove, which is 21-inches wide and about 14-inches deep. Hmm, my design would need to take that into account. Perhaps a fold-out table on my swing-out bumper?

So, it was off to the steel yard where I picked up two 15x15-inch pieces of 16ga aluminum - that would become the top(s) for the table, giving me a work surface of approximately 30x15-inches - plenty big enough for the stove. 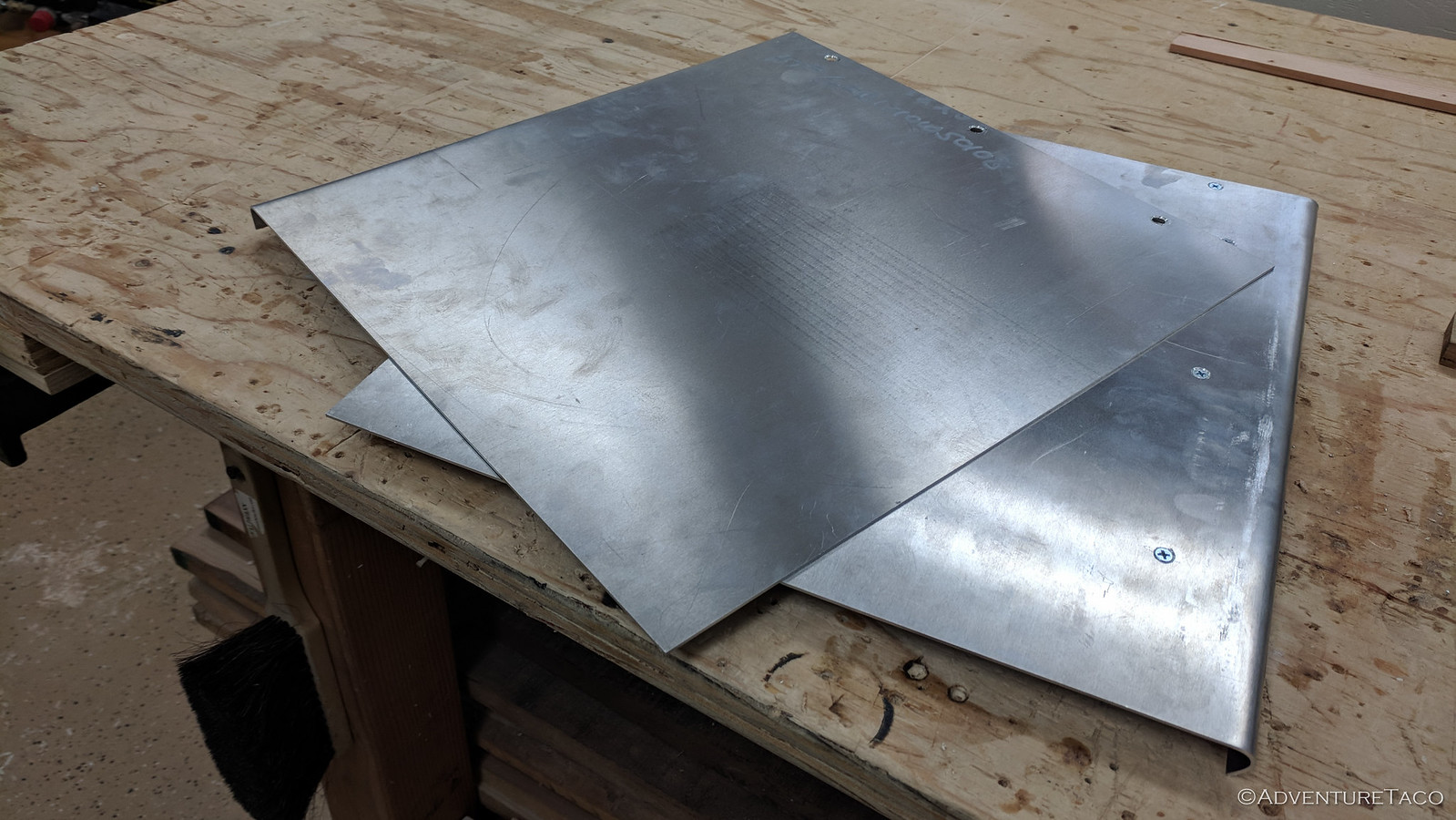 Then, I spent a bit of time with a hammer, the rounded corner of my workbench, and then a dowel to round over what would become the front edge of the table, making it a bit stiffer and also a bit nicer "to the touch" vs. a sharp aluminum edge. 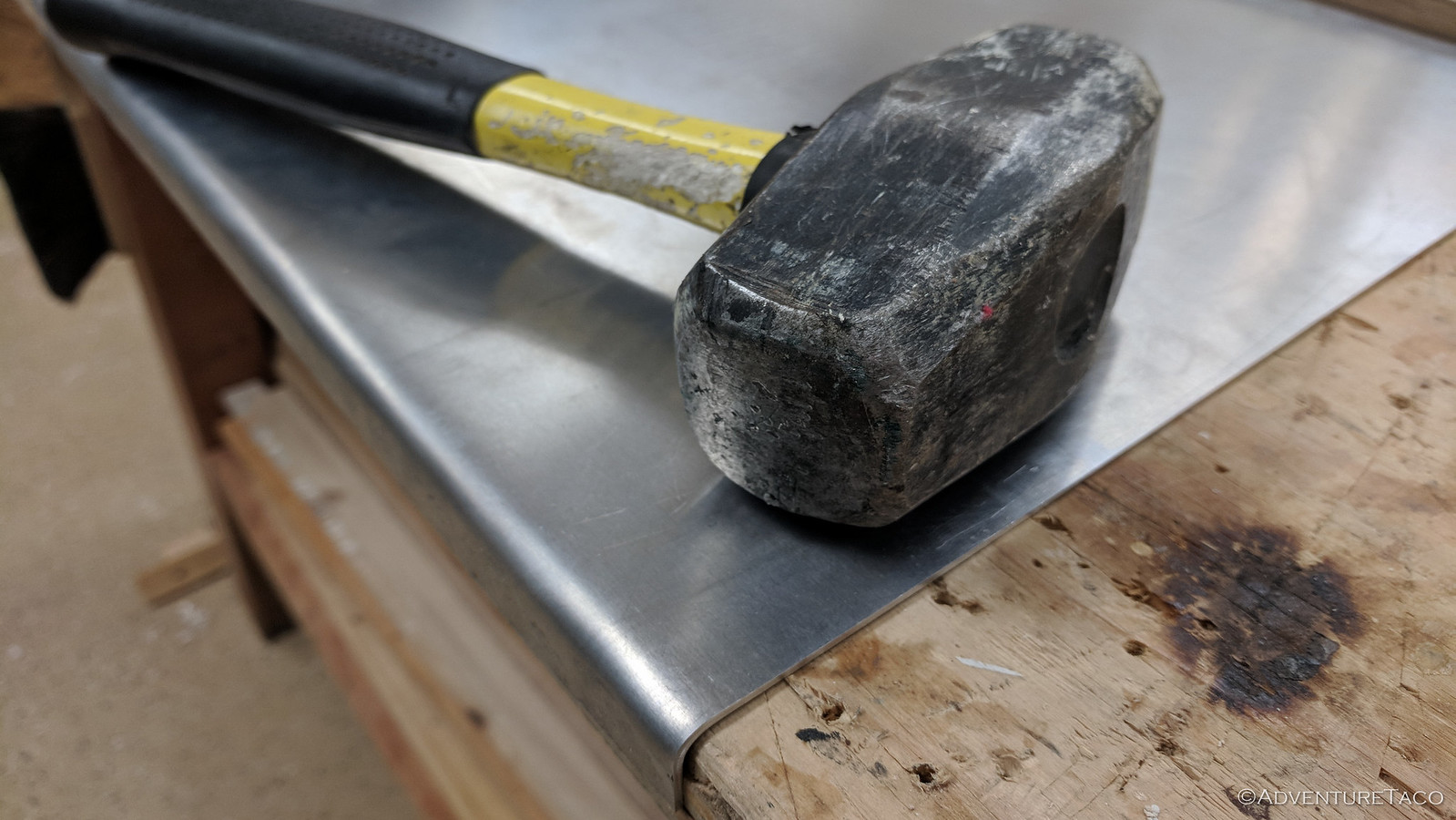 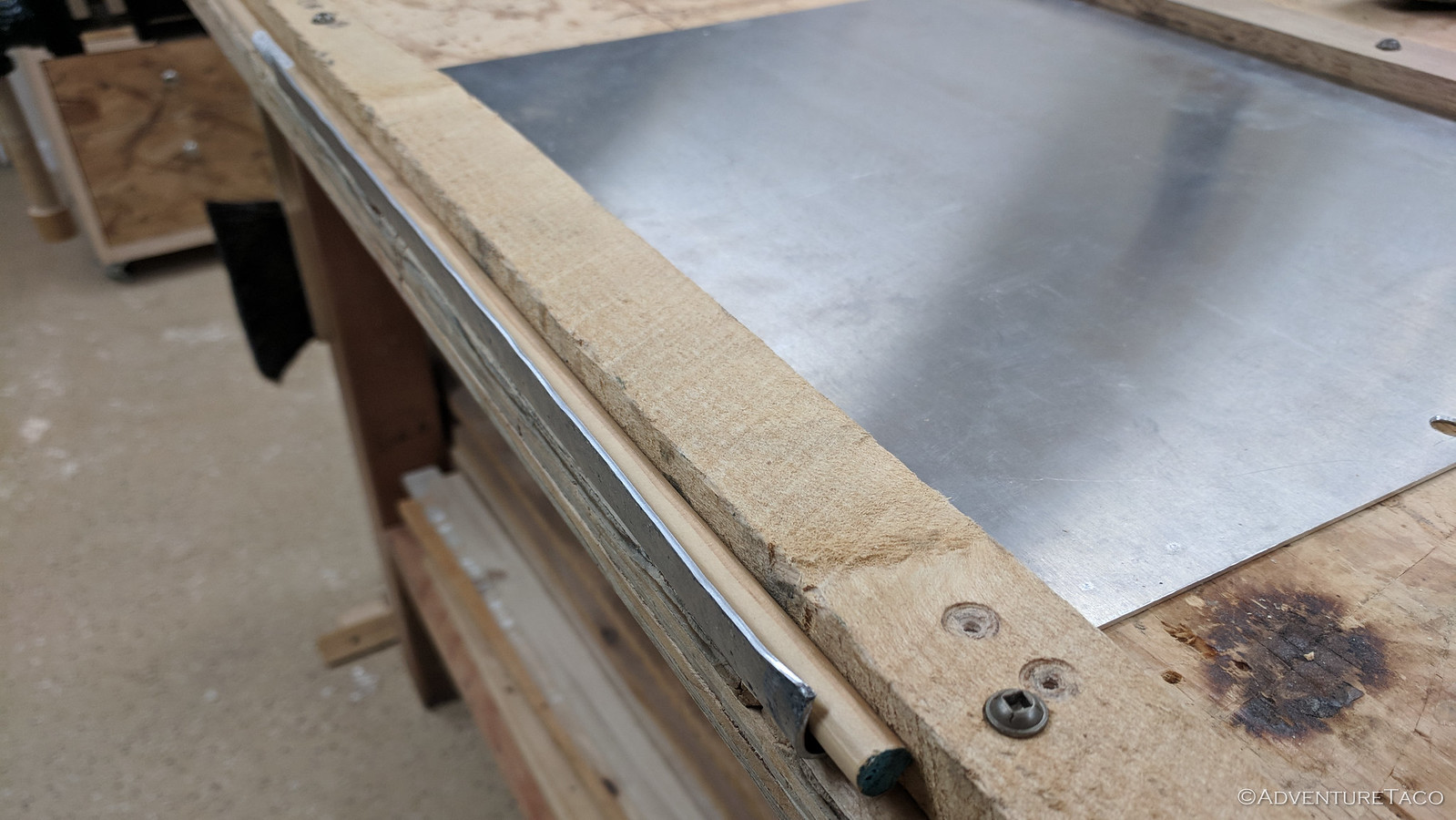 Of course, with two pieces to the top, the next trick was to get them to sit side-by-side when deployed, but to sit "overlapped" when put away, since I only had 15" of space on the swing-out. This I accomplished with a pair of hinges that would allow the table to fold over on itself when not in use. 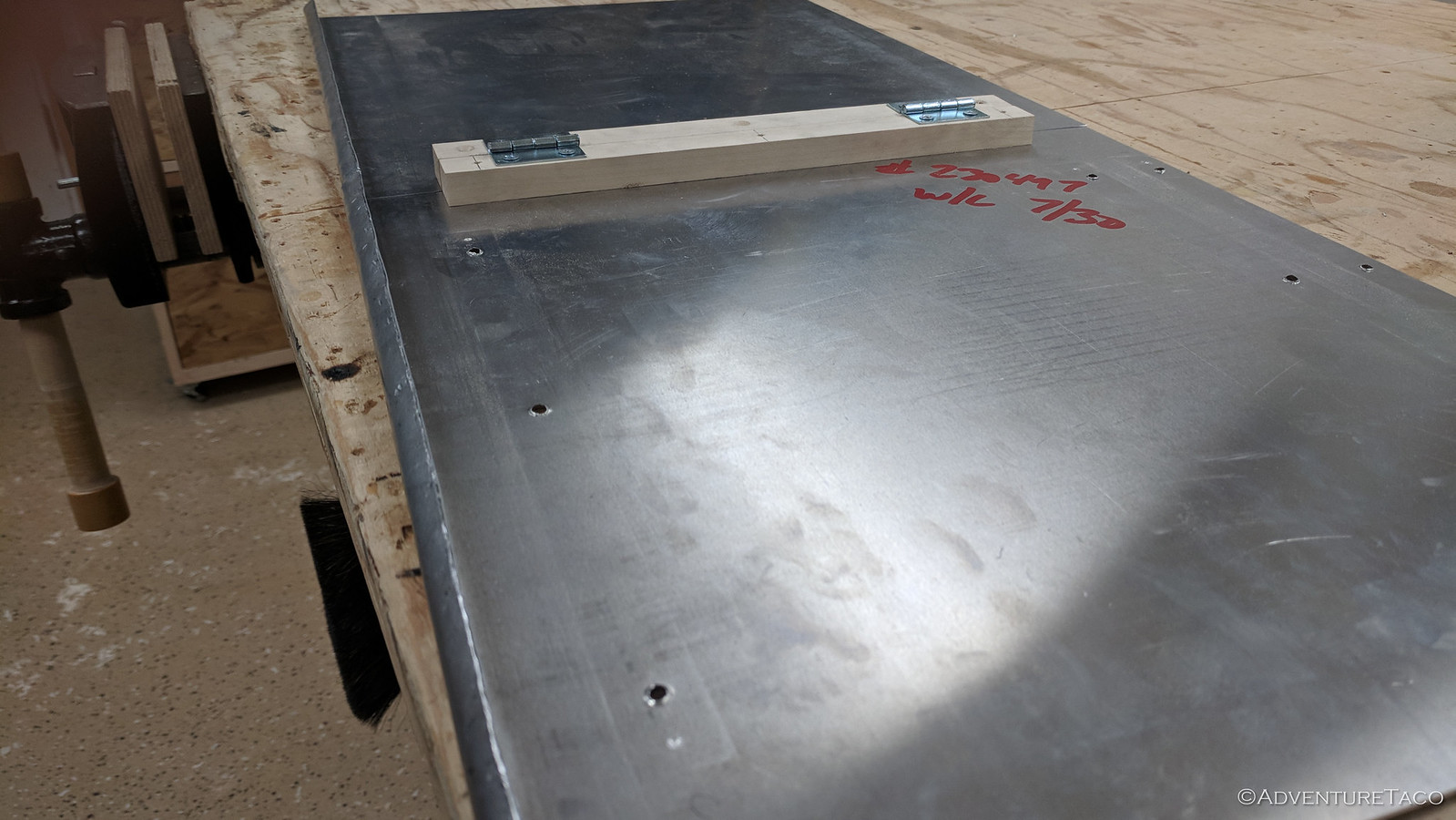 That seemed to work well enough - better than I thought actually, since the wood mounts I used for the hinges also stiffened the top and allowed space for the rounded front edges when the table was closed. (lucky me!) But of course with a folding table, I now needed some way to keep it from folding when it was deployed - enter the sliding supports! 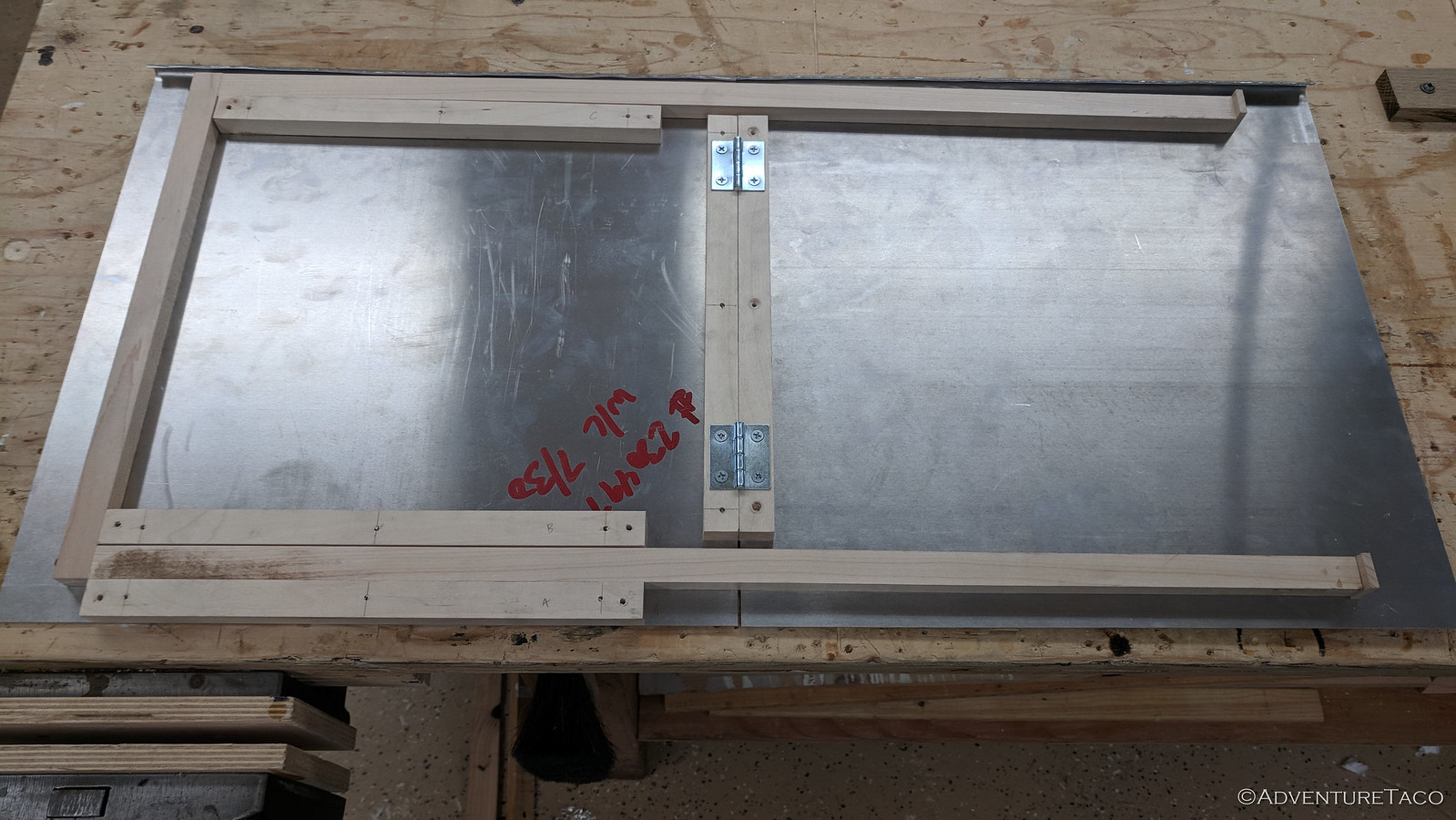 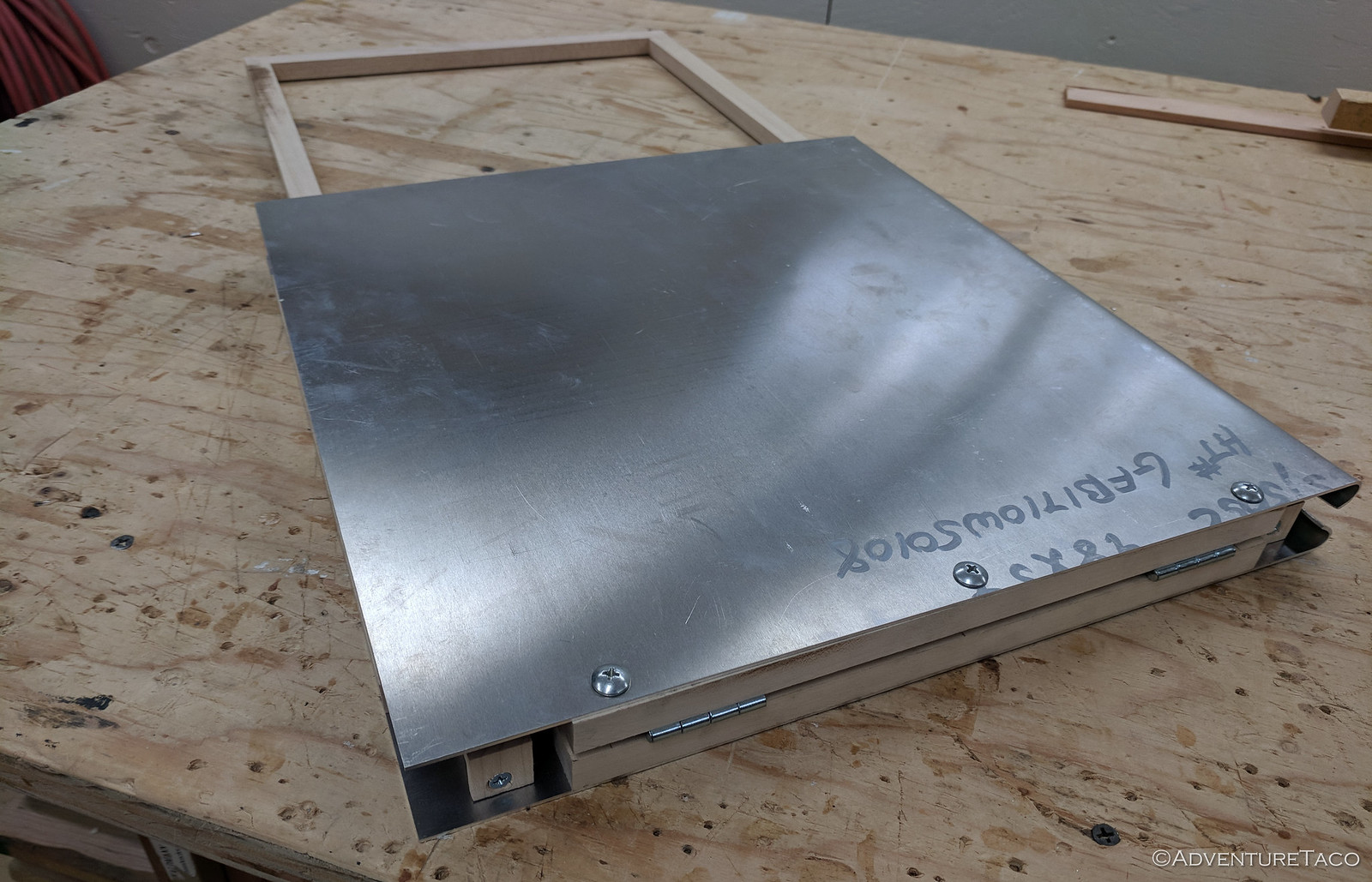 Whew! Now all that was left was to mount the table to the swing-out and make sure it fit!

Following the trend so far of mixing materials, I played around with the hinges I'd picked up and decided that the best way to secure the table was going to be to mount a piece of wood to the swing-out, and then hinge off of that (and to the wood securing the runners on the table). So, I set about drilling holes for a couple of bolts in the wood and in the swing-out, and then tapping the swing-out to accept the bolts. In a future revision, I may use the Astro 1442 Rivnut tool instead of directly threading the swing-out; but this worked splendidly for now. 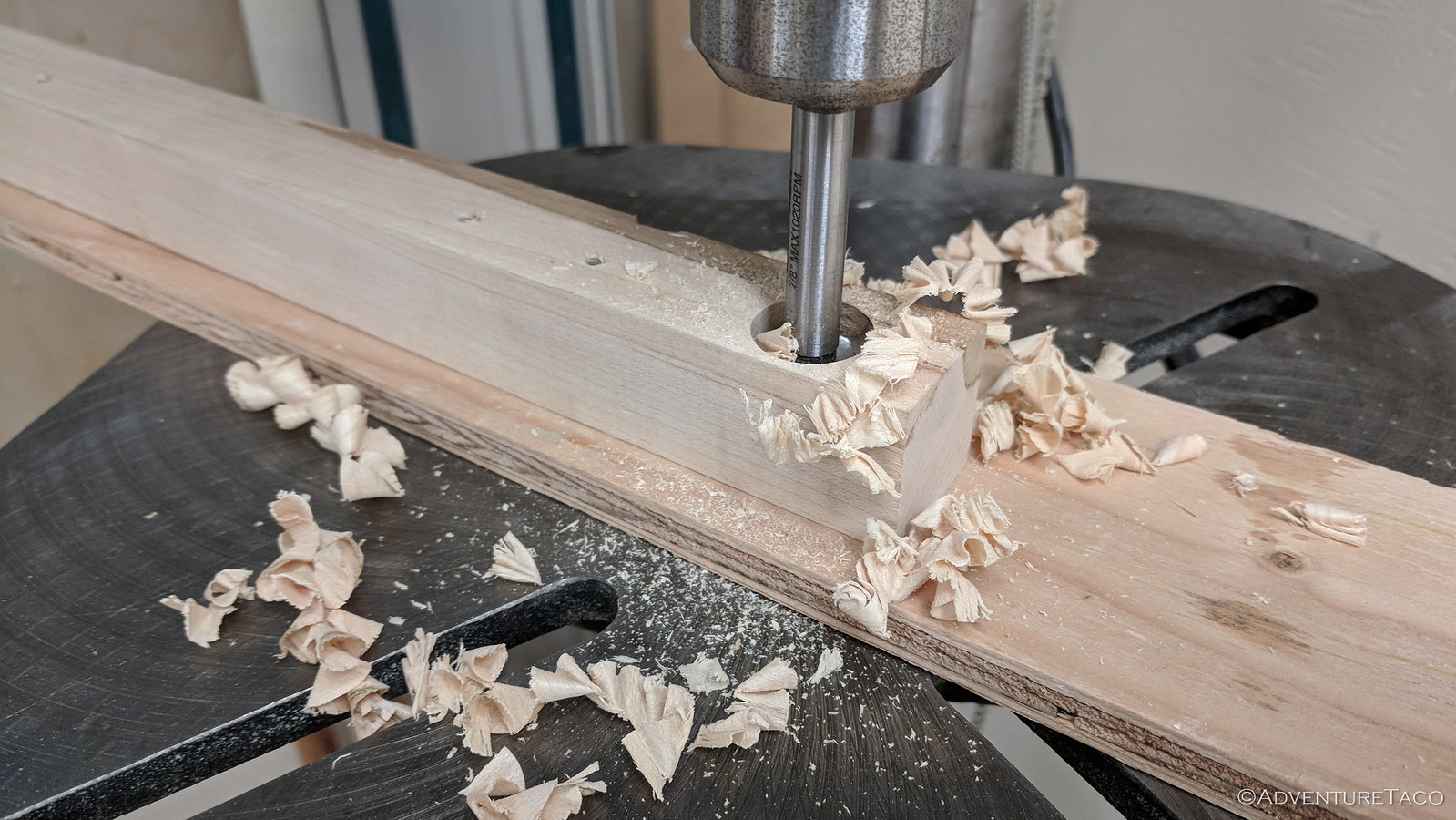 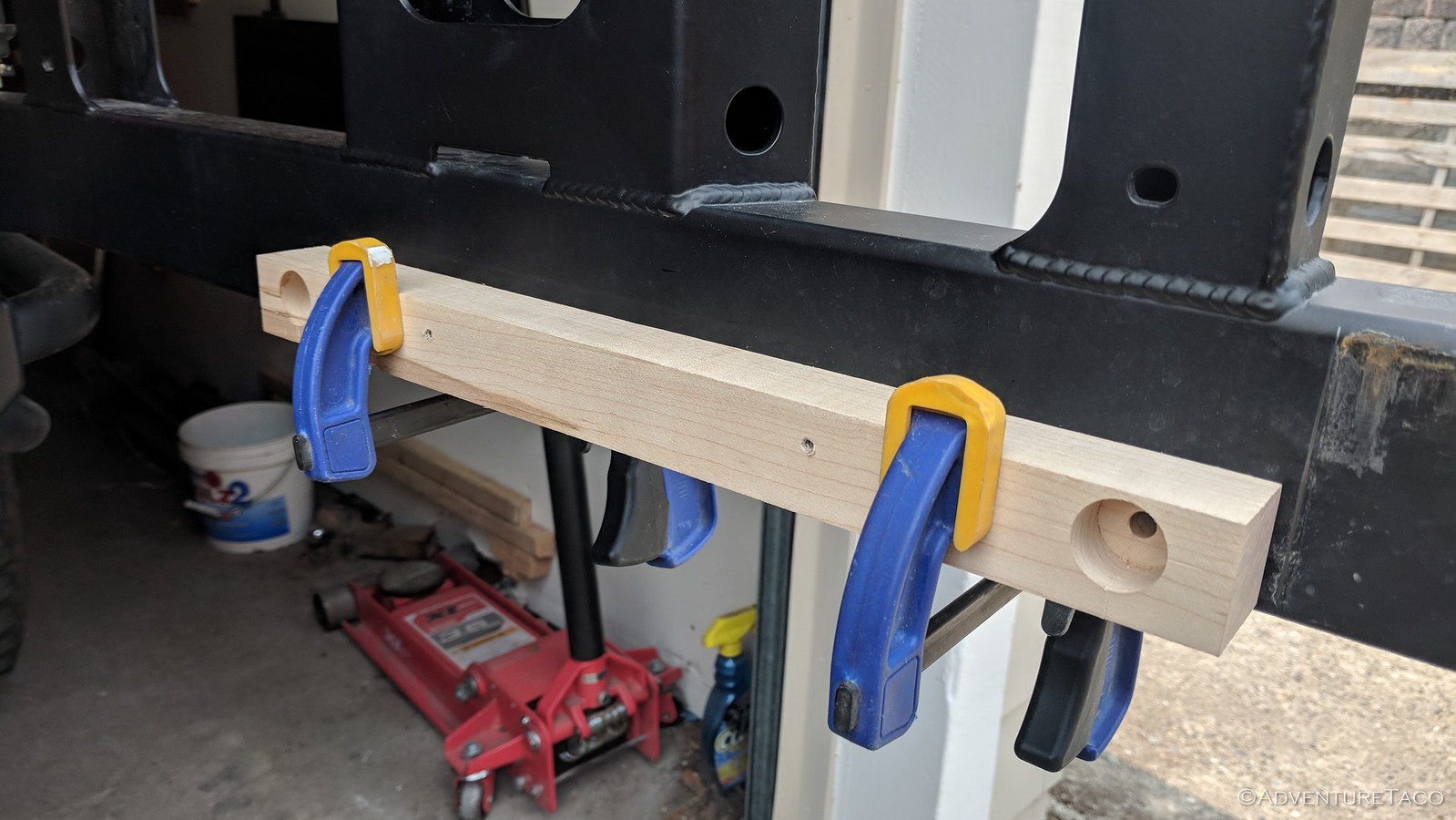 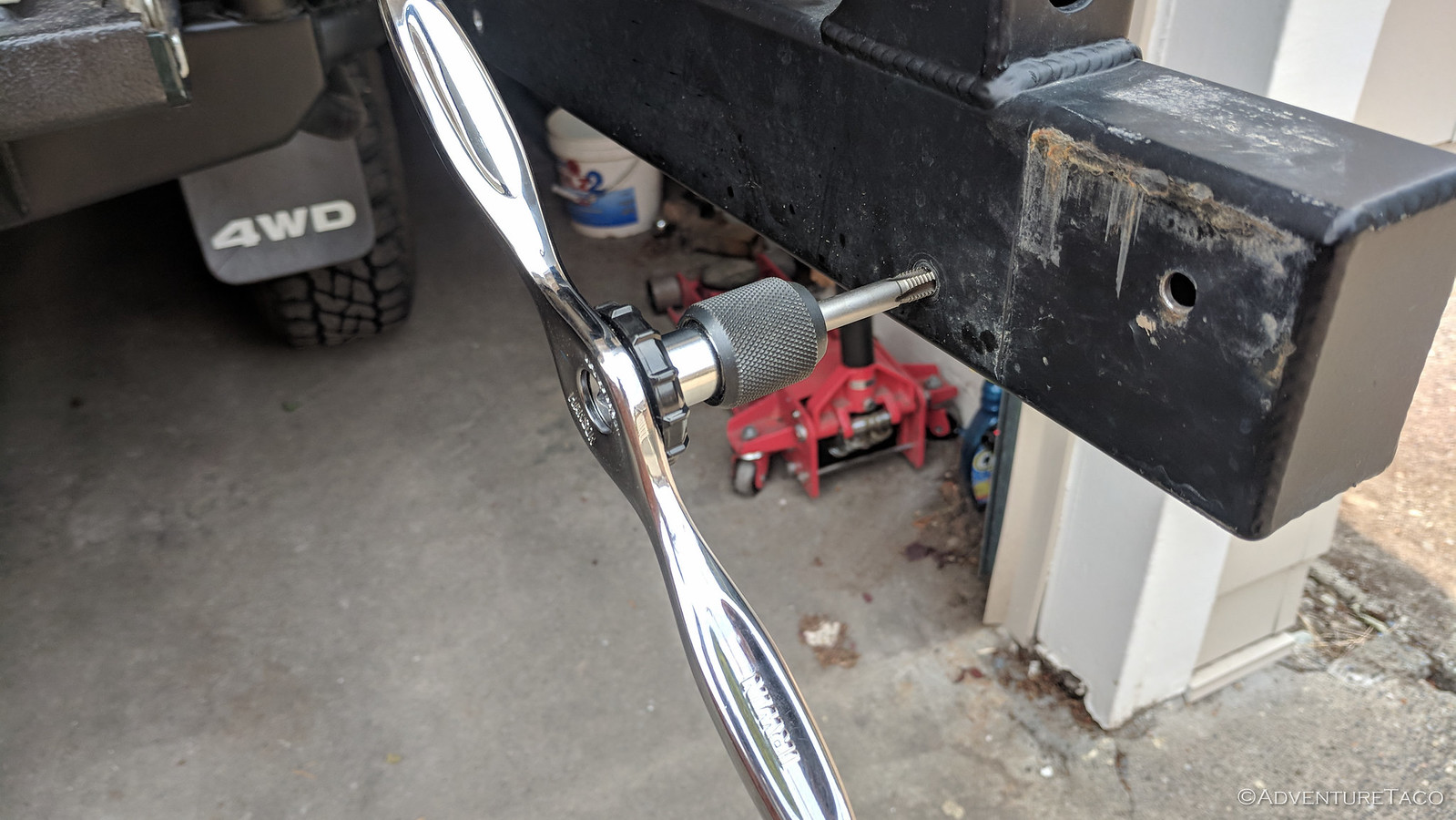 So now the table was attached, swung down appropriately and seemed to generally fit. But, I needed a way to keep it level when deployed. This of course is generally accomplished using some cable between the outer corner of the table and the bumper swing-out - and I accomplished it the same way. A couple of eye-bolts threaded into the appropriate places were all I needed. 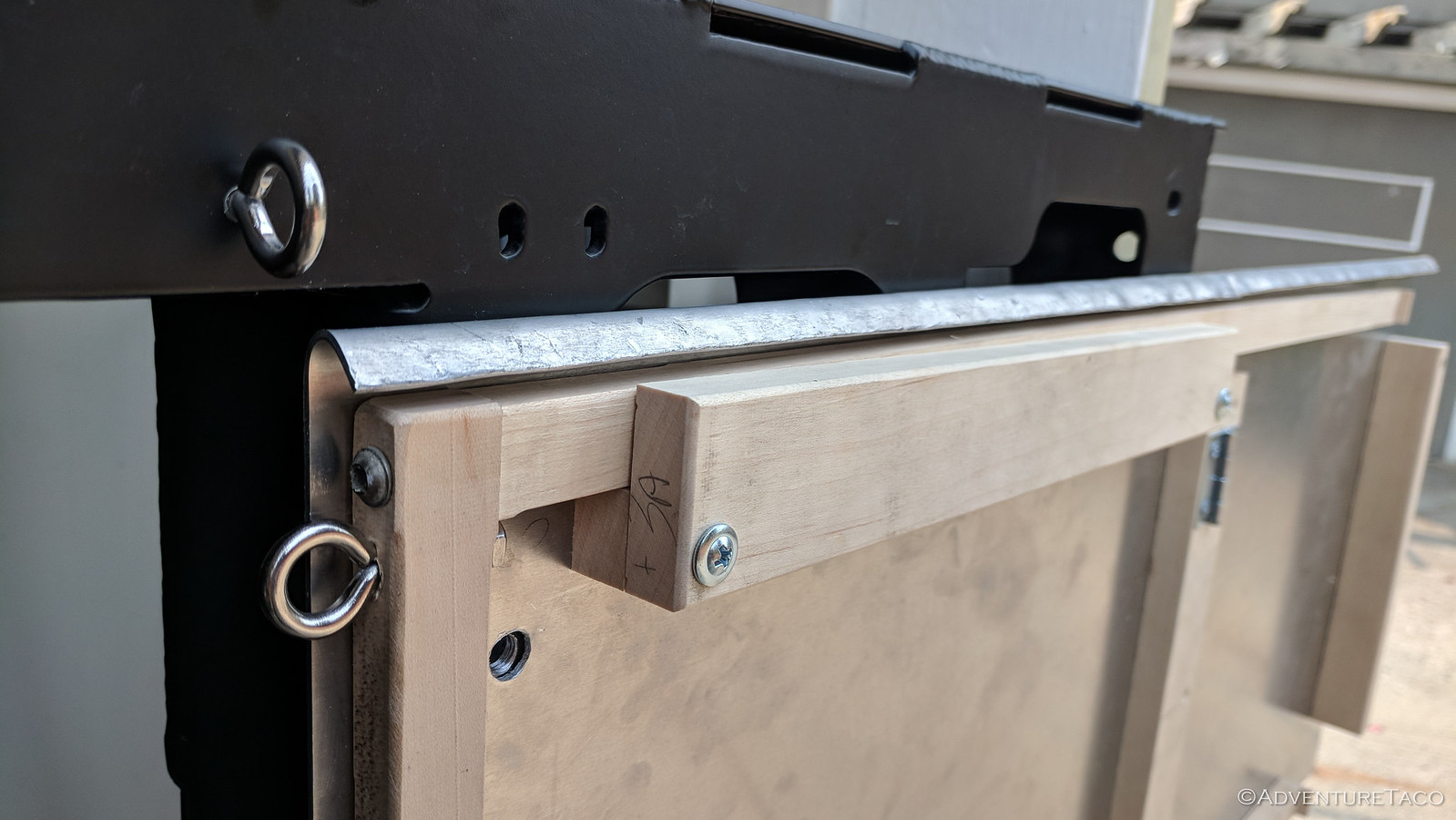 That left just one more step - a hole for a thumbscrew to hold it all to the back of the swing-out when not in use; an easy enough install the same way I'd drilled and threaded the other holes in the swing-out. Then, the table could be folded up and put away - so clean! 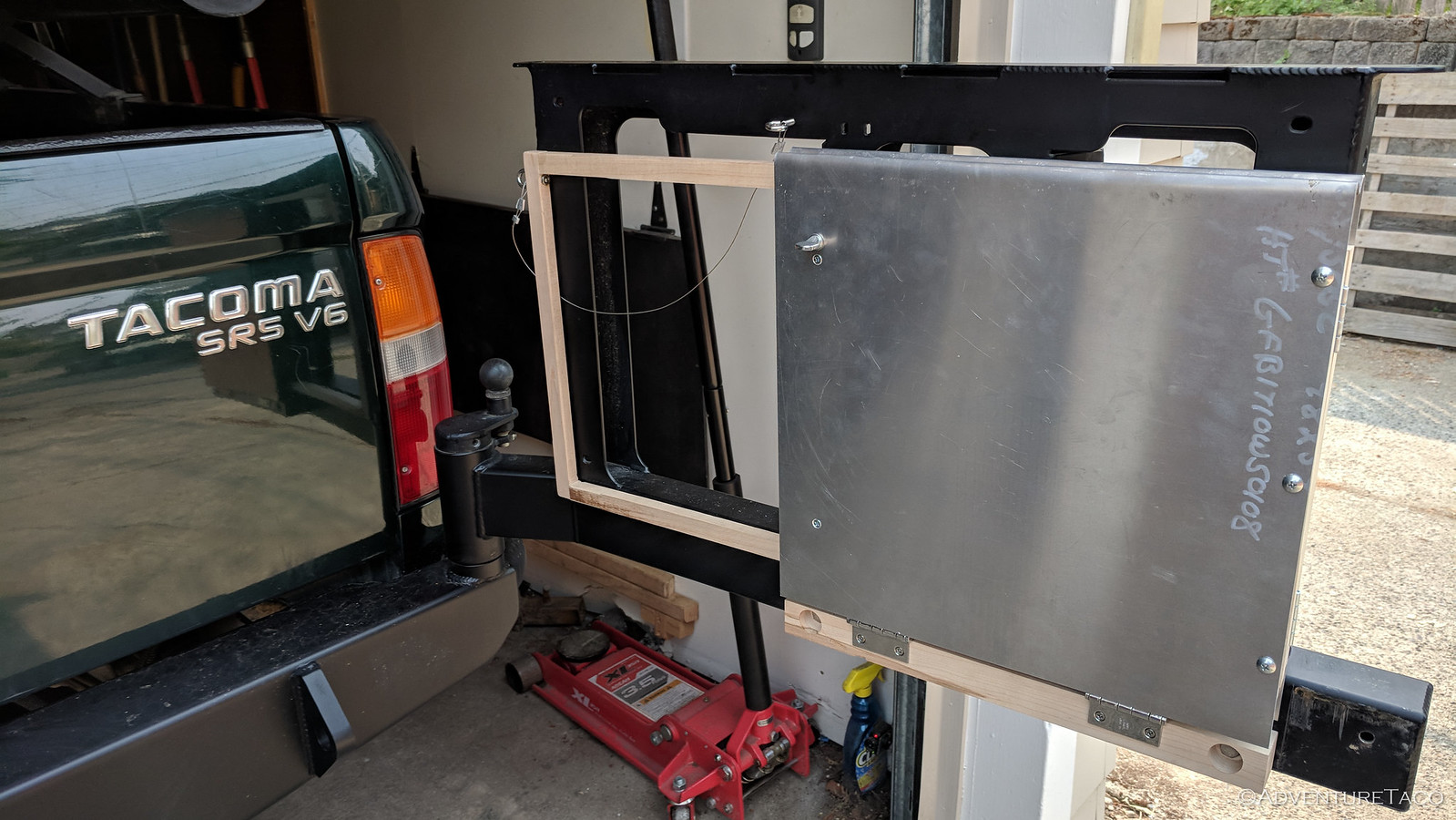 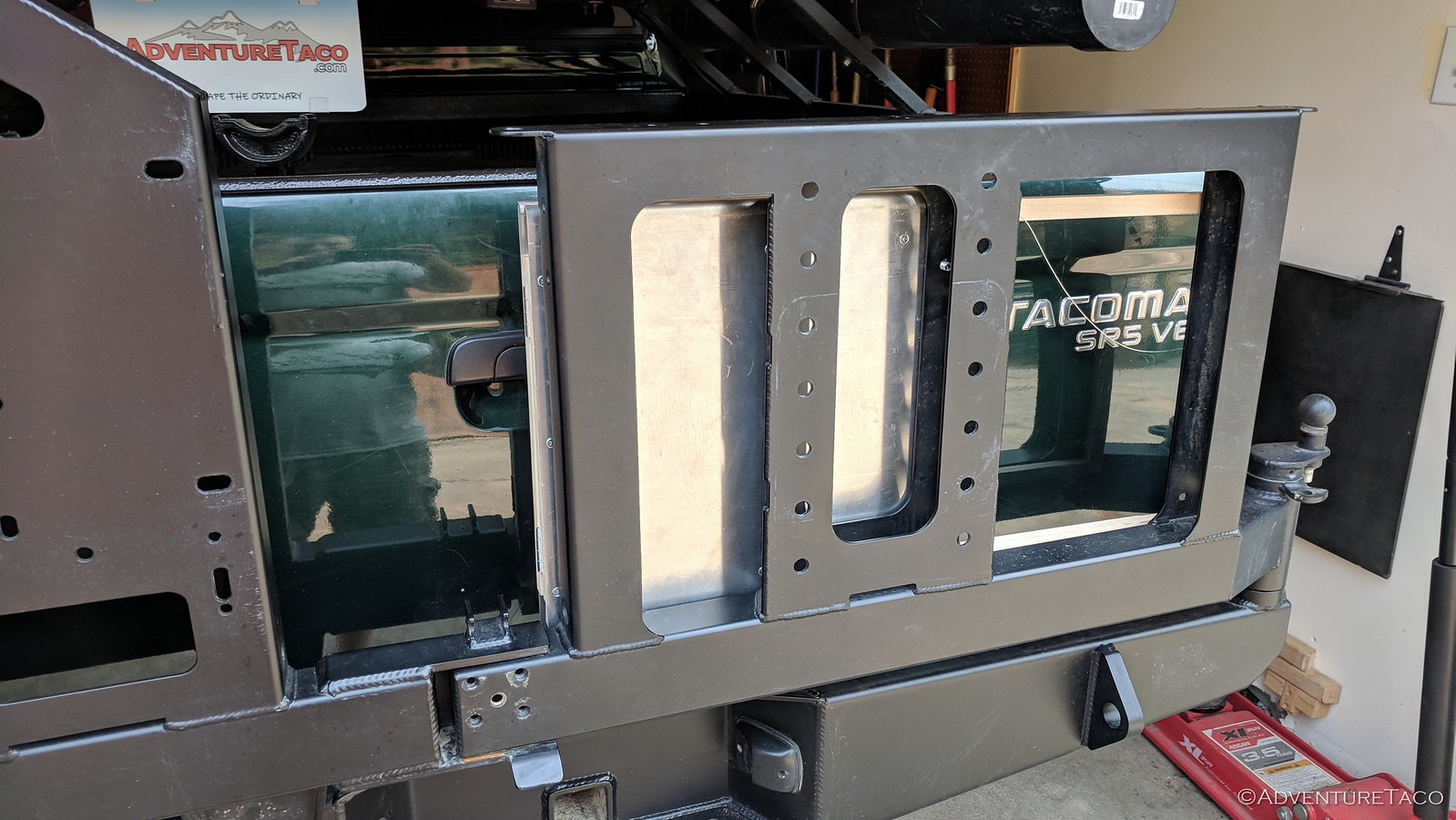 And with that, I was done! It seemed to work quite well, and will easily support the weight of the stove; though, probably not a ton more - it's definitely not something to sit on! In future revisions, my primary goal is going to be better support of the fold-out section of the table - as it is now, that side is a bit...diving boardy. 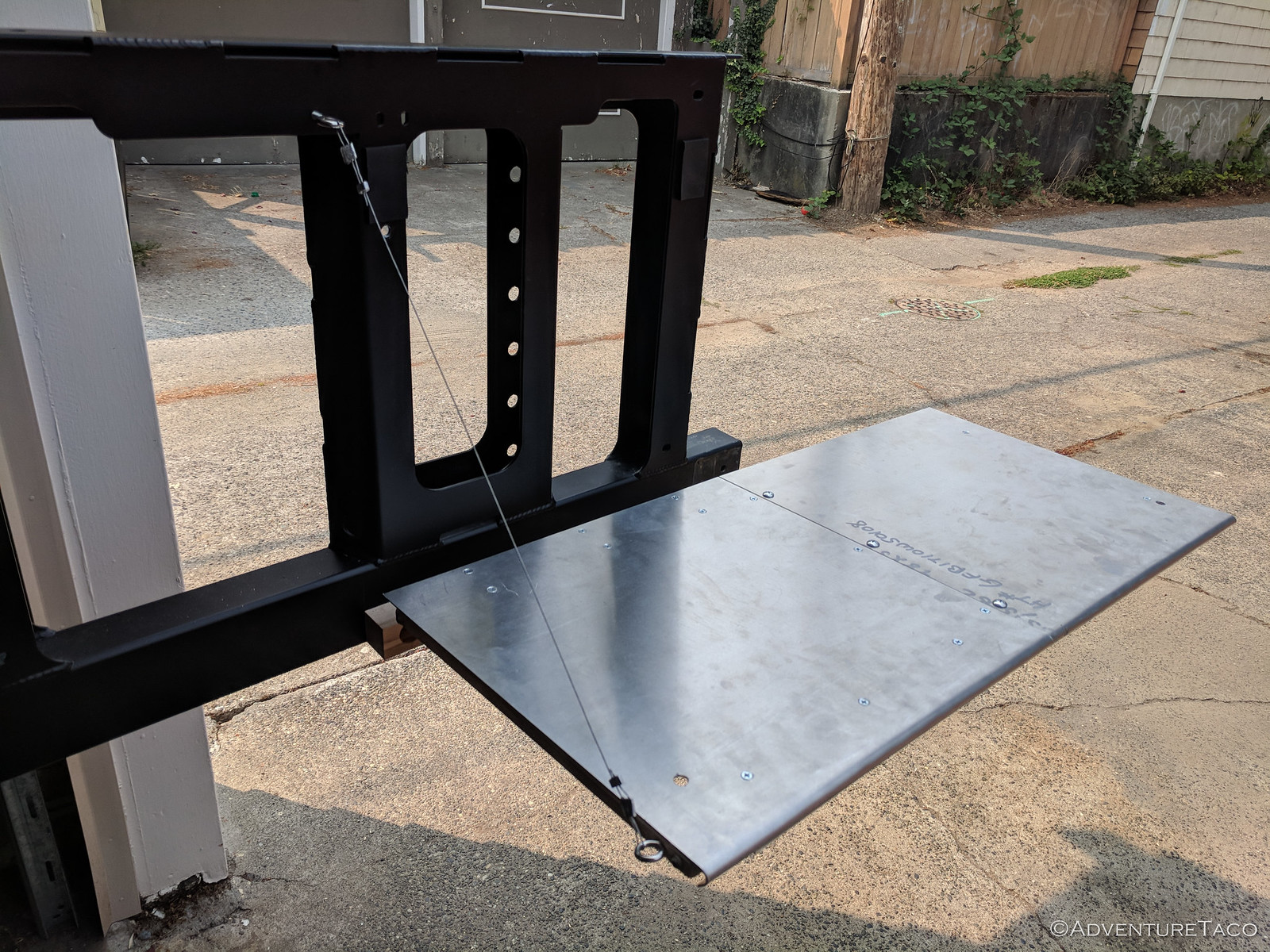 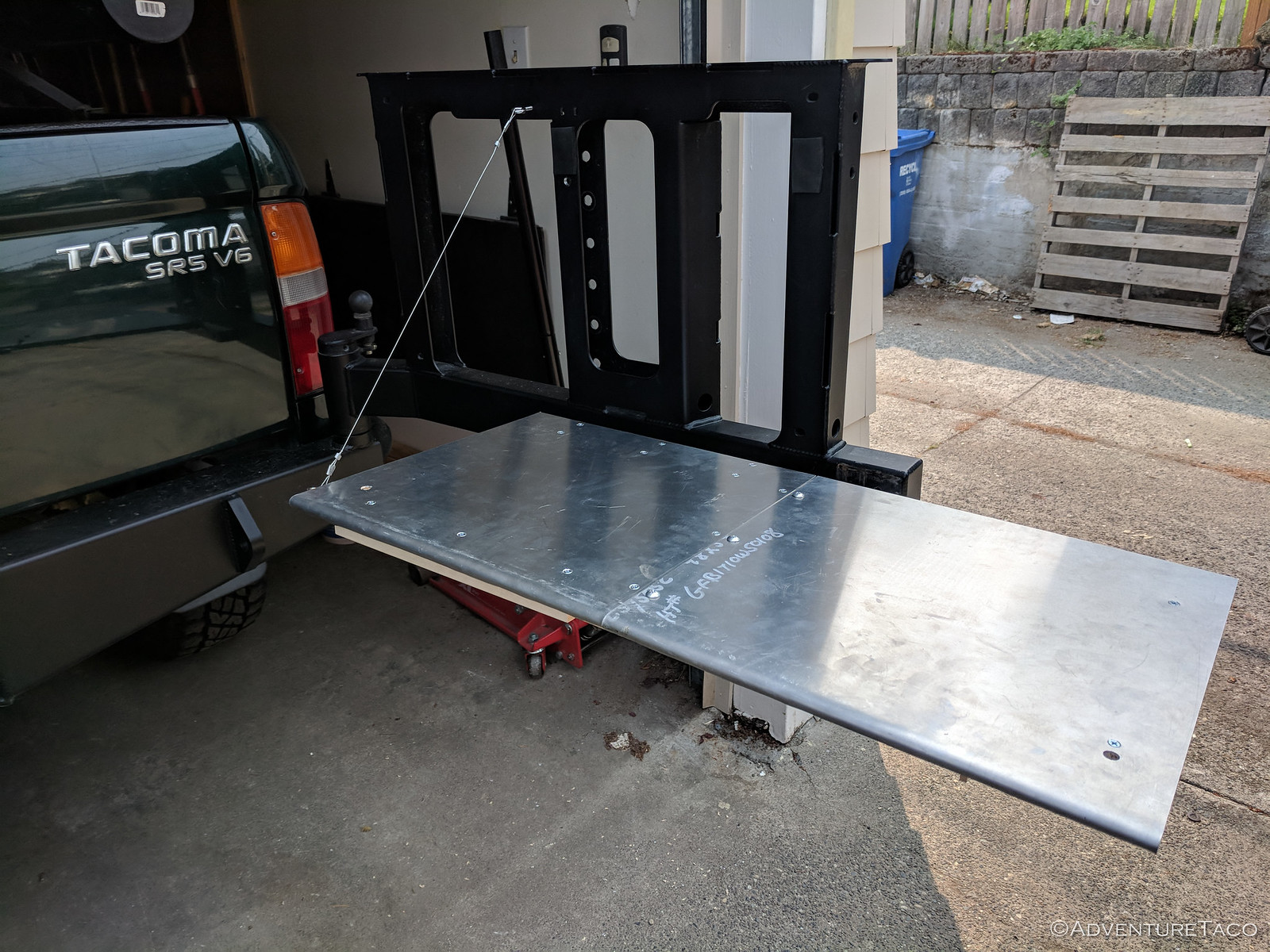 For $20 in aluminum and a bunch of scrap wood and hinges I had laying around, I'm currently mostly happy with the result. The next test, obviously, is to put it to use on a trip!