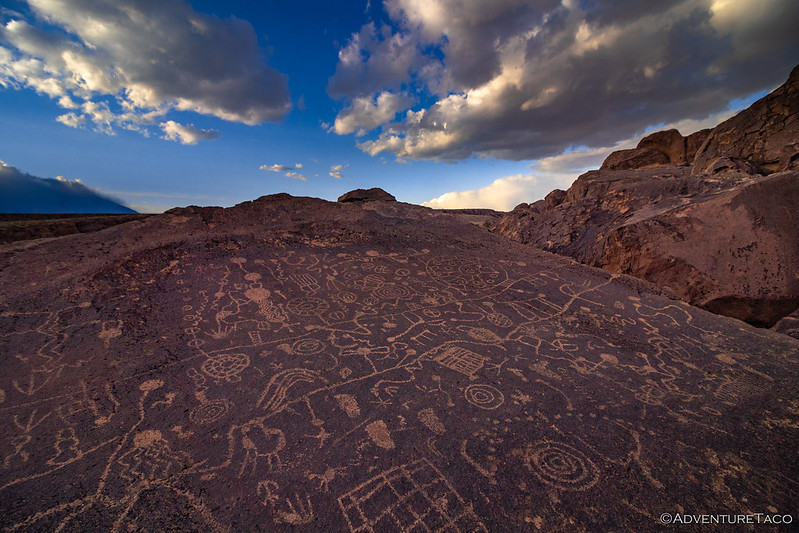 Petroglyphs of the Volcanic Tablelands | Nadeau #4

As much as we may try to plan various aspects of a trip, the best adventures are full of these elements. They are - in my mind - what define adventure.

And so, as we headed north from Darwin, essentially on our way out of Death Valley, I was - perhaps - more excited than I'd been at any previous point on the trip. Now, we were headed north towards Bishop and the nearby Volcanic Tablelands - in search of the ▮▮▮▮▮▮▮▮  Petroglyphs. 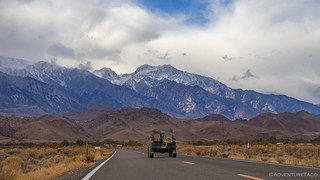 Some much needed snow in the Sierras, finally contained the Creek Fire.

I'd discovered these particular petroglyphs in a most unexpected way: the Microsoft Bing search engine had used them as its background on November 1, 2020 - just three days before we were to head south to explore the Nadeau Trail. Knowing that we'd be in the area, I set about my usual tactics to discover the exact location of ▮▮▮▮▮▮▮▮  so we could check it out!

I failed, miserably. Searches of the internet turned up trip descriptions with general locations, but nothing concrete. Armed with these general locations and high-res satellite imagery, I tried Google Earth as well, with no success. I even emailed a few folks who I thought might know the location and be willing to share. Alas - or perhaps thankfully - they reminded me that it's much more thrilling to find such a special place on ones own. Thank you Eric.

So, armed with a few possible locations, that's where we were headed - in search of the known, via routes unknown.

It took a couple hours to reach Bishop, California, where we'd hoped to stop at @mrs.turbodb's favorite bakery - Schat's - to stock up on sandwiches for the remainder of the trip home. Unfortunately, the line was out the door and moving slowly due to COVID-19, and we had to pass - every minute of light valuable in our search for the petroglyphs.

Just north of Bishop are the Volcanic Tablelands. Formed over 700,000 ago by the Long Valley Caldera, these flat-topped mountains formed when lava erupted and solidified, covering an area of nearly 850 square miles. Ranging in thickness from 500-650 feet, this area was once barren and burnt, but now supports a unique ecosystem of fragile plant life. 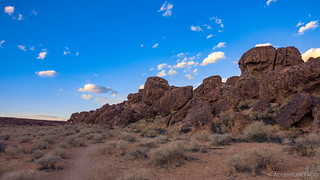 In more recent times, the Paiute-Shoshone Indians lived here and created a great deal of rock art throughout the Tablelands. And, even though this land is public land - managed and protected by the Bureau of Land Management (BLM) - it is such a large area that cannot adequately be patrolled, leaving it vulnerable to those who might disturb its history.

And so, I think it's important to note that this post is a little different than others. With most trips, I don't hesitate to share the specifics of where we are - road and place names plentiful and easily used (with a bit of time) to recreate the same route. For a few trips, I redact names - usually because the person who shared the location with me has requested that it be kept special. In this case, the location and name of the destination are well known, and generally not hard to get to - so redaction of those would serve no purpose. However, as I've mentioned above, the exact location is difficult to find. At least as of this visit, all but the most generic information on how to get there is hidden from public view. I will continue that tradition.

Or first order of business then was making our way to the general location where I suspected that the ▮▮▮▮▮▮▮▮  Petroglyph may reside. This was a bit of a trek - perhaps more or less depending on the starting point - but the varied landscape around us was nearly reward enough! 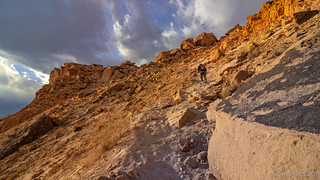 Eventually, we reached the spot I'd marked on our map to start the detailed search. One of the things that differentiates the ▮▮▮▮▮▮▮▮  Petroglyphs from others is that they were created on a rock face that is nearly parallel to the ground - not on a vertical surface like most rock art. As such, the best way to find them is via high ground, and so that's where we headed. Then, we crossed our fingers and began a systematic search of the area.

If we'd chosen the wrong spot, our evening could have easily ended in failure - an outcome that we were both prepared for, and even probably expecting. After all, finding a rock in an area 850 square miles is quite literally the definition of needle in a haystack.

But today was our lucky day. After half an hour or so, we hit the jackpot. Not exactly where I'd expected, but close enough to be discoverable, the ▮▮▮▮▮▮▮▮  petroglyphs reflected the light of the evening sky wonderfully. 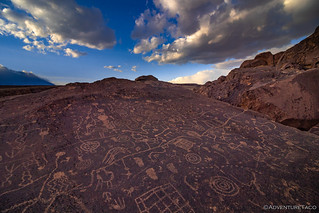 I was a kid in a candy store as I moved from position to position to capture the moment, and probably spent a little more time doing so than @mrs.turbodb would have preferred. Eventually, there were no more angles, and the storm approaching from the west made for chilly temps and difficult lighting, so we called it good - a grin still plastered on my face.

Before heading back, we decided that we'd look around a bit more for another elusive petroglyph that I knew from my research was in the same general area - though, like ▮▮▮▮▮▮▮▮ , the specific location of this petroglyph also held close and difficult to find without knowing someone who knows the location.

If there was ever a day to purchase a lottery ticket, this would have been that day - because not long after departing ▮▮▮▮▮▮▮▮ , we found ourselves feasting our eyes on that which I hadn't imagined we stood any chance at seeing: ▮▮▮▮▮▮▮▮ . 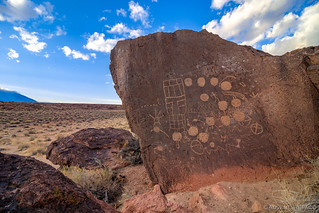 There are 13 moon cycles in a year, each represented in this tremendous piece of art.

More than satisfied, we made our way back to the truck as the sun set overhead. Our shot in the dark had been an unquestionable success and more. Not only had we found what we'd come looking for, but we'd found a new place to explore. Far from a barren wasteland, the geology and historic significance of the Volcanic Tablelands had piqued my interest. As I knew after my first trip to Death Valley, I can tell this is a place I will return! 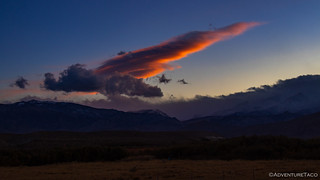 And with that, we pointed the Tacoma north - an 18-hour drive ahead of us. Within 5 minutes of reaching the highway, the snow started, and it didn't let up until we were most of the way through Oregon. We really had timed this whole thing perfectly!

We Arrive to the Sound of the Desert | Nadeau #1 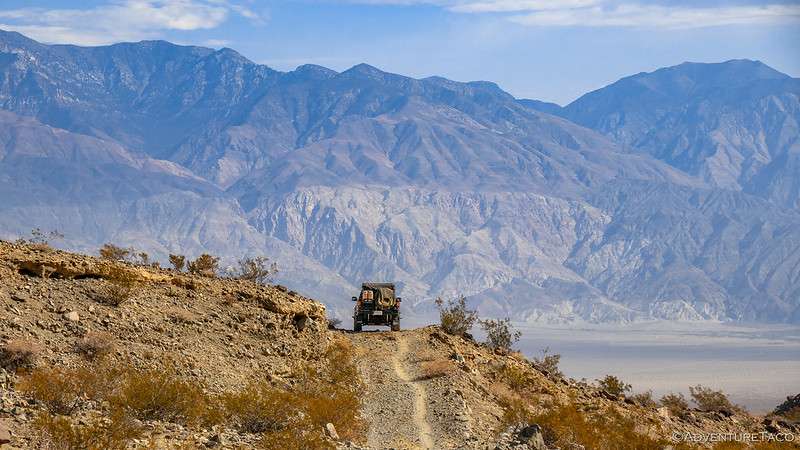 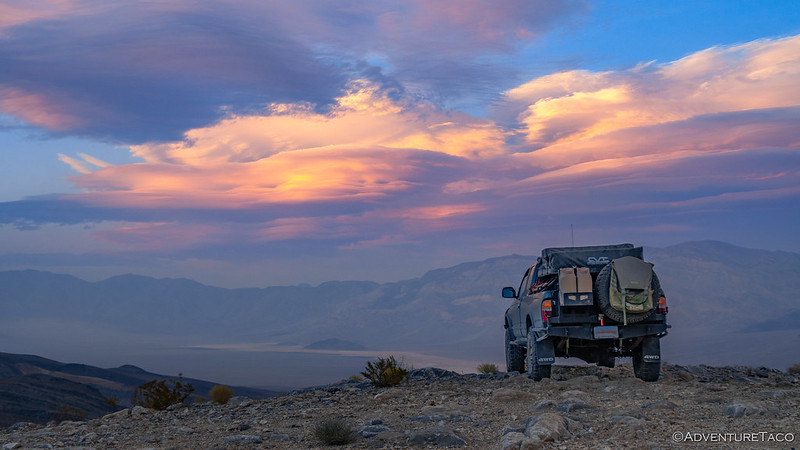 A Most Scenic Destination and Unexpected Residents | Nadeau #3

Petroglyphs of the Volcanic Tablelands | Nadeau #4