There've been a few tweaks to the truck, and two trips to Death Valley since the last rig review, so it's a good time to take stock of how things are going. First, in case you missed the trips, check out:

My Headlights are Too Dim (partially resolved, but not totally)

TL;DR - the headlights are better, but I still have work to do to make them work well in inclement weather.

I tweaked the headlights in several ways after returning from The 3C Trip - I replaced the headlight bulbs with LEDs, upgraded the Hella 700s with HIDs, and fixed the interaction between the Hellas and DRLs when the hi-beams are switched on and off (see HIDs and LEDs - Finally, I Can See Again! and *Fixing* My First Mod - Really Disabling the Daytime Running Lights). I'm very happy with two aspects of this work: first, the HID upgrade for the Hella's. The light output from them now is simply amazing - it's like running in daylight (ok, not really, but it is SO bright). Second, the DRL/Hi/Low/Hella interaction is now perfect - the Hellas come on when the hi-beams are on, and are off at all other times.

What I'm not so happy with are the new LEDs, and that deserves a bit more explanation - because it's not for the reason I thought it would be. My review of the BEAMTECH H4 LED Headlight (9003 Hi/Lo) is actually a mixed bag. In good weather, they actually seemed quite nice - significantly better than I'd expected after I'd seen the bright white light they emitted when I'd first turned them on in the garage. In fact, after about 8 hours of night driving on the first trip down to Death Valley, I was pretty sure I was going to keep the LEDs.

On the way back from Death Valley, we hit bad weather - snow. Heavy snow. Even though they didn't perform as well as they had in good weather, this wasn't enough to change my mind on the LEDs.

So, overall I was quite happy with them from a light performance perspective - happier than I thought I'd be, even with the poor weather, hi-beam situation. After all, I knew that I wouldn't be able to use the Hellas in the snow, and hi-beams seem somewhat similar.

But then - something I totally didn't expect. I noticed on the way home that when the headlights - low- or hi-beams - are on, my ham radio "busy" indicator is always on. Like full on. On both channels. So, the ham thinks that it's receiving a transmission all the time. So, the RFI the headlights put out is terrible. I don't think they are shielded at all. And, they are on a completely separate electrical system (air gapped) than my radio, so there's nothing I can do to fix it. ...And for that reason, I'm going to at least try some other non-LED bulbs. 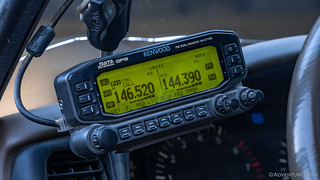 TL;DR - why didn't I install limit straps earlier. These things make the suspension so much more enjoyable.

After the trip to Colorado, I installed some Kartek limit straps, to protect my shock towers from the enormous changes in force I knew they were experiencing when my suspension fully unloaded over certain types of terrain. The difference on the trail was more dramatic than I could have imagined - this is perhaps my most favorite suspension upgrade of all time. It used to be that over whoops, or dropping down from large rocks/shelves, I would hear the front suspension unload, the coilover fully extending and a "clunk" as the control arm movement was limited by the length of the shock. Because I knew this wasn't good for the shock tower, I would frequently find myself slowing down significantly over terrain that I knew would cause this behavior. Even then, I'd still get a handful of "clunks" a day, and I'd cringe every time.

Or is it? On our trips down to Death Valley, I found that I was able to travel much faster than "normal," because I was no longer worried about the front suspension. But, I'll need to be careful - that faster travel will move stress to other parts of the truck, and that could mean cracking of other components. Damn you limit straps! 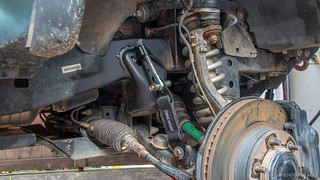 TL;DR - The middle two mounts on the mid skid broke off again. I need to come up with a new way to secure the mid-skid at the crossmember.

Back when we ran the Whipsaw Trail, I had some issues with the Relentless skids, which I addressed in the Rig Review. Two of those issues have been resolved for some time - the front mounts were re-drilled and tapped, and I added rivnuts to the rear-most mounts for the mid-skid to keep the bolts from ripping out of the thin frame. But the third issue - that the crossmember mounts keep shearing off - is the one that is still a problem. I've welded those mounts back onto the skid three times now, and over the last few trips, they ripped off again.

Time to find a different mounting strategy - perhaps some bolts that go up through the crossmember. Ultimate design TBD. 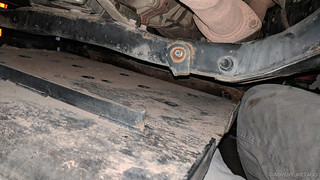 TL;DR - The spherical bearings were completely shot again. And, it happened after only 10,000 miles this time.

I've replaced the spherical bearings several times now, so I'm getting good at it. This time, though they lasted 4 months and 5 trips, they lasted only 10,000 miles. I'd taken a different approach than with previous sets, not directly pressure washing these, but it doesn't seem to have made much of a difference.

I've already replaced the bearings, but I've also ordered some stainless steel versions. Obviously I won't get to test those for a few more months, but hopefully after this next set wears out, I'll end up with a set that last much longer. 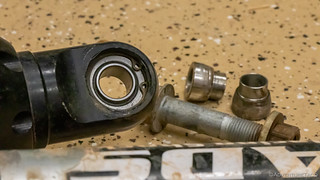