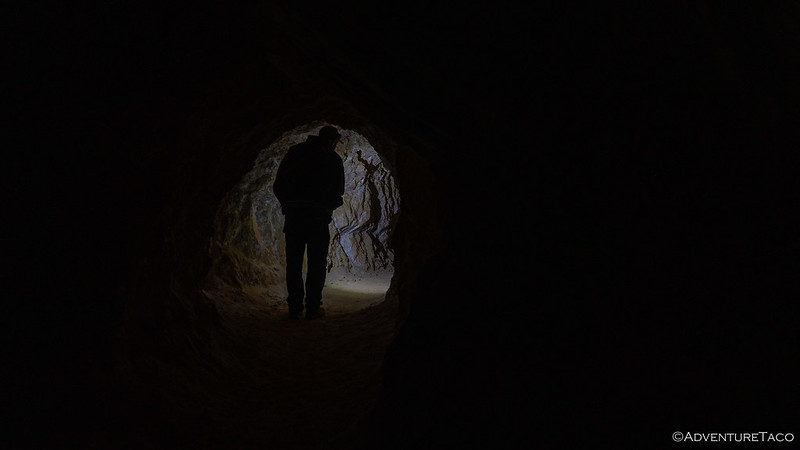 After another evening spent around Mike @Digiratus propane fire pit, we'd all climbed into our tents to clear skies and very light breeze. Thousands of feet above, however, things must have been different. Climbing down my ladder, a dark sky lent a dramatic air to our own little slice of paradise. 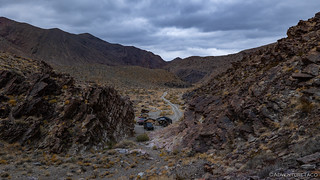 Here, at the end of the road, we had no idea what the day had in store.

Ironically - given that the trip would be over by 11:00am - we were out of camp earlier than any other morning of the trip, pulling up to our first stop - the Inyo Mine - at 8:26am. Having passed by the evening before - and with no idea that anything was amiss at this point - we were in high spirits as we piled out of our trucks to have a look around. 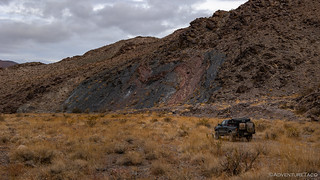 More colorful geology of Echo Canyon on display, even under overcast skies. 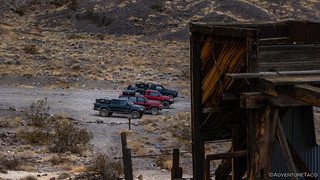 Our parking methodology - four abreast in the middle of the road - may have been a bit... presumptuous, though it was a reasonably safe bet that we were the only ones in the area at such an early hour.

The Inyo Mine's camp is a cluster of half a dozen wooden buildings at the foot of the steep hillside where gold was mined from several different elevations. One of the most scenic - of the easily accessible - mining camps in the park, it is one of the very few that might qualify as a ghost town. Anchored by a large wooden mill at the west end of the camp, this is a place worth setting aside an hour - or four - to explore, making me glad that I hadn't tried to rush through it the previous evening. 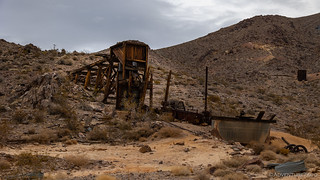 The remains of the Inyo Mine's ball mill.

Although the ball mill itself has been removed, other major components of the mill remain. Its 30-ton ore bin, the wheels of the jaw crusher, its settling plates and large metal tank, and the diesel engine that powered it are still in place - each of them perched, welded, and rigged just so, as is often the case with desert machinery. 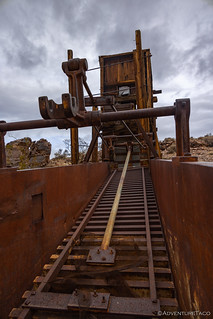 Settling plates to assist in the separation of gold from the worthless stone. 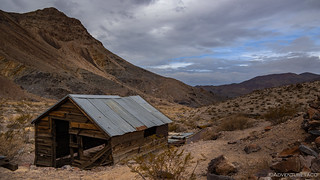 A workshop near the mill stored spare parts and provided a place to fix anything that broke. 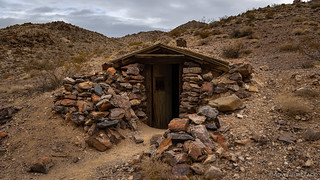 A small dugout dating from the 1907 mining era. 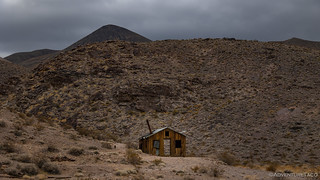 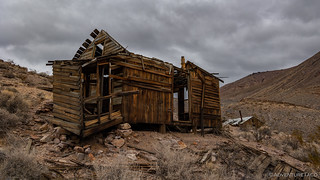 A building of unknown use, soon to be a pile of boards. Please, if you visit, don't accelerate the inevitable.

Having explored the buildings at the lowest level of the mine site, it was time to head up the mountain to investigate a few of the workings. Split into three elevations of shafts, I'd only investigated the exterior of the first shaft when the @mrs.turbodb and I had visited one year earlier. I hoped that this time, Zane @Speedytech7, Monte @Blackdawg and I would explore at least one more adit before getting back on the trail. 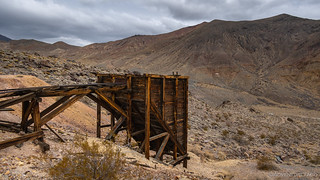 A loading ramp and ore chute at the lowest shaft allowed material to be easily trucked down the hillside to the mill.

After taking a few photos of the ore chute, I made a beeline for the adit. This - the Octaroon adit - was the main adit of the Inyo mine, connected to the others via a series of vertical and inclined shafts. We wandered in. 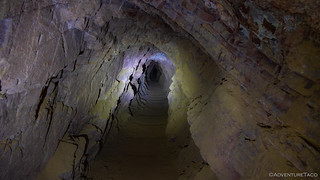 The floor of the Octaroon was dusty, depressions in the floor betraying the narrow-gauge rail that once carried carts full of ore to the chute at the entrance. 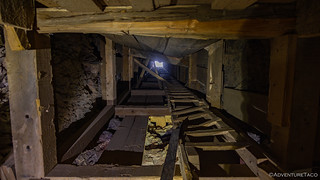 A hundred feet in, we found a vertical shaft with a ladder leading to daylight. Soon, we'd discover the other end! 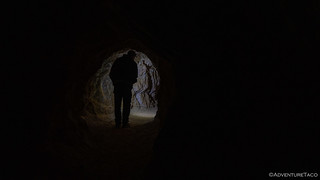 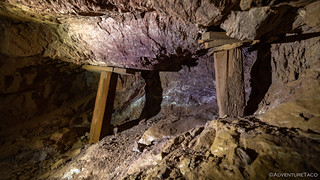 There were several forks in the Octaroon shaft, blasted away to follow the six veins of gold-bearing quartz contained in the mountain. Some were short, while others led to large caverns supported by timber. 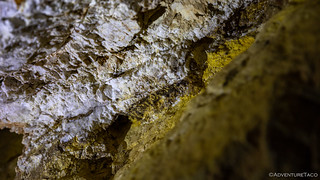 A sparkling vein of material. 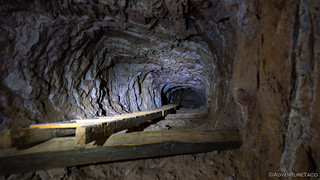 700 feet into the mountain, a ladder led up an inclined shaft - to where, even we were not going to find out.

Thirty minutes after we entered - and after a moment of utter darkness deep in the mountain - we worked our way back toward the entrance, glad to have flashlights to aid us along the way. As we exited the mine, I suggested we head up the hill - to the second of three levels - since that would be new ground for me after my last visit. Monte and Zane were - naturally - game.

A hundred feet further up the mountain, we came upon the adit known as the Martha Raye. Actually, we came upon two shafts - one, a vertical shaft that we soon realized was the same one we'd seen from below as we'd explored the Octaroon, and a second that headed horizontally into the hillside - ripe for exploration. 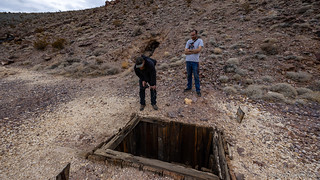 Opting to work smarter rather than harder, miners used this vertical shaft to deliver ore from the Martha Raye adit to ore carts in the Octaroon. Today, signs at the opening implore visitors not to drop anything down the shaft as it has begun to impede the ability to explore the Octaroon. 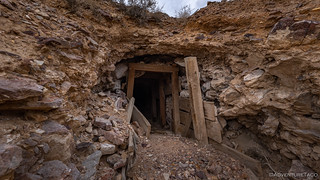 Shall we check this one out as well? Yes, we shall!

Inside the Martha Raye was significantly different than the first shaft we'd explored. While the Martha Raye shaft did push its way into the hillside, there were many areas where miners had hollowed out large voids in the rock as they chased valuable material. Though most were no more than 2-3 feet high, they were 30 feet wide and extended for 50 feet or more - even pitching up, down, and sideways - where veins of quartz once ran through the mountain. The strange angles of the workings, the fact that the remaining material is heavily shattered, and the skimpiness of the wood framing make it a miracle that some of these adits have not yet collapsed. 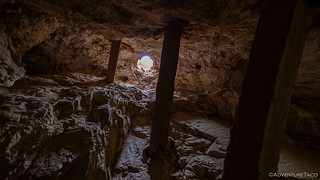 Certainly, three beams can hold up a mountain... right?

We spent significantly less time in the Martha Raye than we had in the Octaroon - each of us getting the feeling that the construction here wasn't quite as... reliable as we'd seen on the lower level. Within just a few minutes, we were headed back toward the safety of daylight, ready to return to the Tacomas. 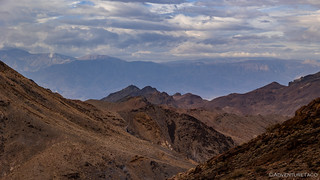 The view across the Funeral Mountains and to the Panamints was breathtaking as we exited the mine. 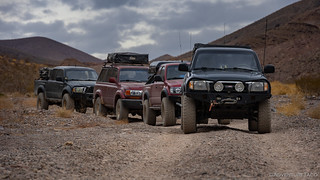 Back in the trucks and headed out Echo Canyon for Eureka Valley!

We covered only a couple miles before I knew something was seriously wrong with my truck. Since hearing the weird noise from what I thought was my transfer case a couple days earlier, I'd had no reason to use 4-Lo - the only mode in which I'd noticed a problem. With the rest of the fellas suggesting that the problem was with one of the planetary gears in the doubler, I figured that as long as I really limited my 4-Lo usage, I'd be just find for the remainder of the trip. The problem was: I was currently in 2-Hi.

Immediately I stopped the truck and radioed back to the guys, calling Zane forward to listen to the sound that was now much louder - and more consistent - than it'd been before. Almost immediately, Zane zeroed in on it being the noise of a bearing spinning itself to bits. He suggested that I place the transfer case in neutral and the transmission in gear so that while the front half of the case would spin, the truck wouldn't go anywhere.

The sound persisted. Worse, the entire transfer case - and everything connected to it, up through the driver seat - began clicking.

"Definitely a bearing, looks like you're going home!" Monte said. And of course, Zane agreed. A bit of discussion ensued as I tried to better understand where the issue was, and how screwed I really was. What bearing did they think was failing? Did they think I would make it home? What was the worst that could happen if the bearing failed catastrophically along the way?

Guesses to those questions shared, Mike made a good suggestion - while the shortest route home was back through Nevada, the smarter route was probably to head west to US-395 and ultimately I-5, ensuring a relatively constant stream of civilization, should I need to avail myself of a u-haul trailer.

And, so it was - under the Needles Eye Arch - that we made the decision to call the trip. Zane and Mike would follow me home - just in case - and we'd all have to come back to Death Valley in the future to finish what we'd started. 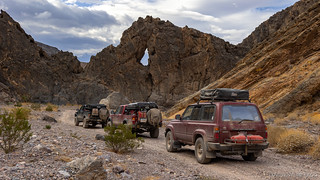 It was hard to believe that in the span of just a few minutes, so much could change. 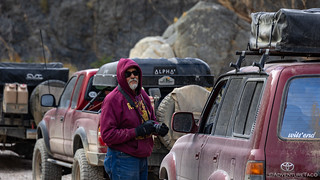 Though my spirits were a bit crushed - how could my truck break when I was in the middle of showing off one of my favorite places to friends who'd never been before? - everyone else was completely understanding and remained in high spirits as we took our last photos.

Finishing out Echo Canyon, the bearing that'd first caused me some trouble on a single trip 100,000 miles earlier, and that had acted up for only the second time a couple days before, was quite obviously in a much angrier mood. As if reading my mind, Monte chimed in over the radio, "I'm sure it's not easy, but just try to ignore it; you'll get home just fine."

Hoping he was right, I suggested that rather than heading straight home that we at least check out Zabriskie Point - just a mile or two away from the mouth of Echo Canyon. Everyone was game, so that's exactly what we did. We even used the stop to throw in the spare fuel we'd brought along - not need to pay California prices if we didn't need to - and air up our tires for the pavement in front of us.

As we climbed the paved trail to Zabriskie Point, our first view of the badlands - with the Black Mountains behind - was breathtaking. 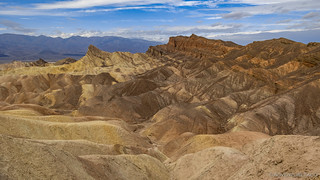 From the top, the badlands spread out - the fantastic marbling adding to the drama! 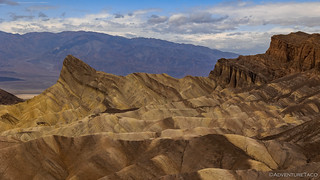 These formations are the result of the recent uplift and erosion of sediments that settled to the bottom of a lake that covered Death Valley some 3- to 5-million years ago.

As we walked back to the trucks, we noticed that we picked up a fifth vehicle. A classy gold one, no less! 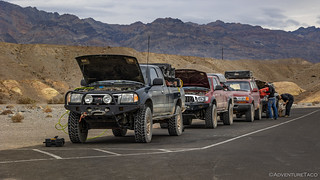 Any trip where you only air up once can't be all bad.

Our trucks as road-worth as they could be - it turns out Mike was also experiencing some drive-train issues, though less-significant than mine - we all headed north on CA-190. We'd travel as a group of four for a few miles until Monte split off to Beatty and the rest of us continued to the Owens Valley.

Just before we split up, I spotted a vehicle along the side of the road. Oh, how I wish we'd been in a position to stop and find Ken @DVExile - hiking somewhere in a spectacular canyon nearby - but that wasn't in the cards today. 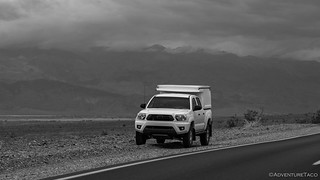 Well now, I know that truck.

For the next 19 hours, I was more nervous than I've ever been when driving the Tacoma. Every few minutes, the balls would catch between the races, spinning and crunching. Every time, I'd jump in my seat. The pattern would repeat - sometimes seemingly better, other times much worse - all the way home. But Monte and the guys were right - I made it.

Beginning of the End - Back for More #3

Love Death Valley? Check out
The Death Valley Index
for all the amazing places I've been in and around this special place over the years.