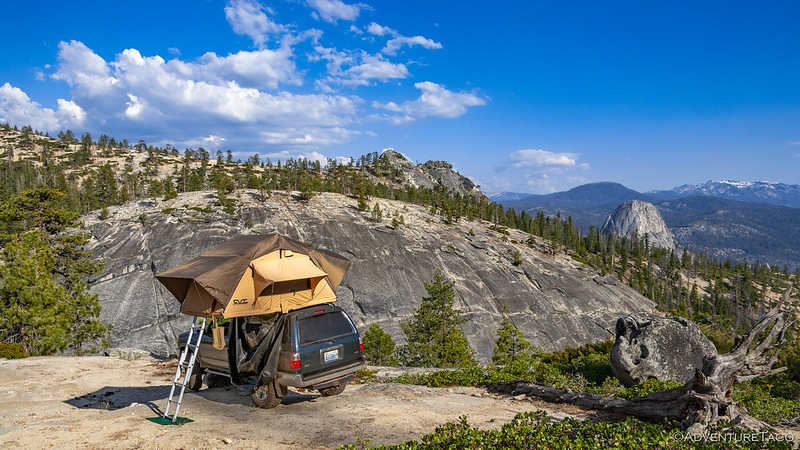 This was a trip I'd been waiting for. Well, not this trip exactly, but a trip to this location - ▮▮▮▮▮▮▮▮▮▮▮▮▮  - in the Sierra National Forest. See, after our last trip there, Pops and I regularly chatted about our next chance to visit this special place - we'd planned for it to happen in early July, but we'd both been keeping an eye on snow levels and road-and-forest status since January.

At that time, COVID-19 wasn't something we were concerned about at all, but as winter turned to spring... and as the snow levels dropped, the closed status of the forest became our bigger concern. April turned to May, and all indications were that the forest would remain closed for the foreseeable future. But then - as May turned to June - a partial opening. Campgrounds and developed sites were still closed, and no USFS employees (except Rangers) would be out in the woods, but dispersed camping and trailheads were opened up for recreation.

I immediately penciled in a trip that started less than a week in the future.

Unsure if Pops would even be able to make it on such short notice, I wondered if this would be my first "Pops-less" trip. I wouldn't be solo - I was looking forward to showing @mrs.turbodb around on her first visit - but I figured if Pops didn't come, it would be a good opportunity to clear the road and clean up the camp site a bit before he and I would come back together in early July.

I shouldn't have wondered however - the lure of this place is too great for Pops, and a couple days before we were set to leave, he let me know that he'd bought sandwiches for every meal

, and was packing the Jeep to go.

Note: Several places in this story are redacted. If you recognize any of the places shown in the photos, please help to keep them special by not mentioning their names or locations.

We'd told Pops we'd be showing up sometime on Thursday after lunch, and it was right around 2:00pm when we turned onto ▮▮▮▮▮▮▮▮▮▮▮▮  and headed east. This being @mrs.turbodb's first trip, we took it slow getting to the camp site - stopping at several locations along the way that were of particular interest. 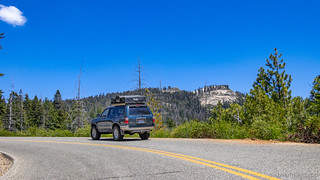 Our first stop was at ▮▮▮▮▮▮▮▮▮▮ . This was a place that I knew @mrs.turbodb - a geologist at heart - would love, the formation so unique that it begs the question - "how?" Well, it turns out, it's quite simple actually - the round rock is a corestone that was formed in place by spheroidal weathering and later exposed by the erosion of the saprolite that once enclosed it.

See, I told you it was simple.

Oh, and I've redacted the identifiable photo. So, yeah.

As you can imagine, a place like this was special not just to present day travelers. For hundreds or thousands of years, Native Americans lived here, the surrounding bedrock dotted with Morteros where they ground various grains using granite pestles. 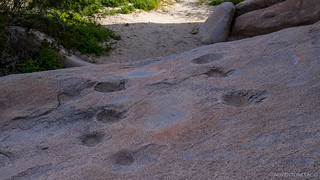 Enjoying the nice weather, we were in no rush, but we eventually piled back into the 4Runner and continued on towards our next destination. We'd brought the 4Runner for a few reasons - the CVT Mt. Shasta RTT was already on it from our recent family trip to the Cascades, and there were some in-progress improvements happening to the Tacoma. 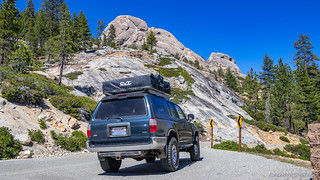 Our next stop - ▮▮▮▮▮▮▮▮▮▮▮▮▮▮▮▮  - was one I'd passed by previously but that afforded a splendid view (which I forgot to capture) and a little creek rushing down the face of the granite. 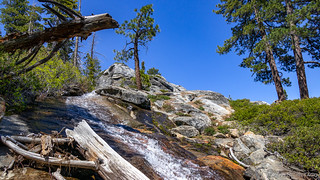 Just a pull-out in the road, we didn't spend long this time before moving along. It was our next stop - another new one for me - that ended up capturing our senses for an extended period of time. Intrigued by the name - ▮▮▮▮▮▮▮▮▮▮▮▮▮▮  - we turned right and followed a short road about a quarter mile until the forest fell away and the bright green grass of spring unfolded before us. 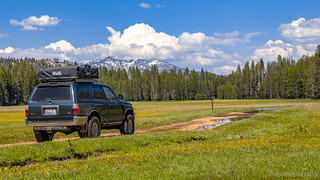 It reminded me of Tuolumne Meadows, in Yosemite National Park, but better - because we were the only ones around! With all manner of wildflowers in bloom, @mrs.turbodb was out of the truck inspecting the flora as we continued to soak in the view. 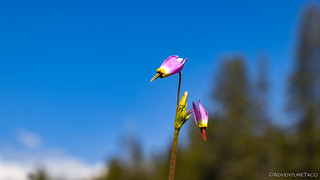 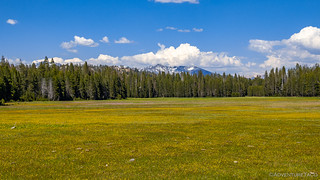 While we weren't planning to go any further on this short side road, I couldn't help but notice that there was a good 8-10 inches of water over the road - for a good hundred feet or so - just in front of us. Knowing that we were in a this-could-be-a-lot-of-fun situation, I asked @mrs.turbodb to take a few shots while I "turned around" a little further up. 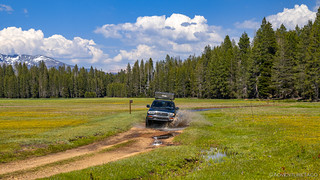 It turns out, the shot back the way we'd come, from "a little further up," was equally dramatic to the view we'd had entering the meadow, so I was forced to make a few trips through the water in order to get the right shot. Shucks.

A rock formation known as "▮▮▮▮▮▮▮▮▮ ."

With our last side-stop completed, it was finally time to get on with getting to camp. To say we were excited would be an understatement. What would we find as the final miles fell behind us? Surely there would be views - for miles. But would the road be clear - or would downed trees from winter slow our pace as we cleared them? We know it could be smooth sailing or similar to our first trip on the Oregon Backcountry Discovery Route where speed was measured in feet per hour. Either way, it'd be no problem, as I'd brought the Stihl MS-261 chain saw chainsaw (ebay), which it turns out would only be necessary once on this trip! 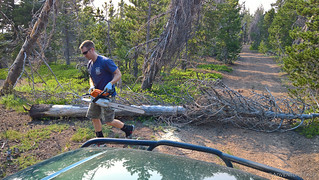 So, the going into camp was reasonably easy, slowed only by our desire to get out and soak in the views and fresh air. On the one hand, it was all so familiar, while at the same time so fun to have this great new place for @mrs.turbodb. 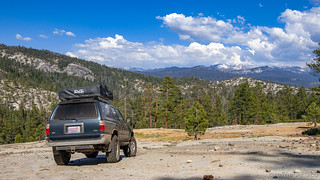 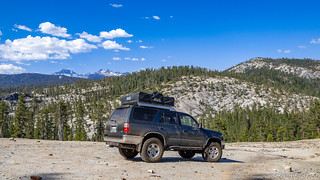 It was right around 5:00pm when we pulled into camp, relieved to find it empty - and with us the first visitors of the year from the look of things. We set about getting ourselves situated - unloading the cooler and kitchen stuff in camp, cleaning up various detritus that had fallen over the winter, that kind of thing.

Pops - naturally - had claimed his usual sleeping spot right up near the camp area. Not that you can blame him - it is a beautiful location. 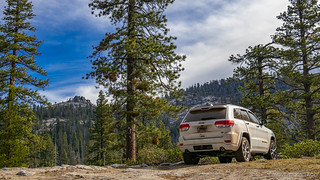 And it was just fine with us that the near-camp location was claimed, because that meant we'd also be camped in my usual spot - the one that overlooks the valley and ▮▮▮▮▮▮▮▮▮▮▮▮ . 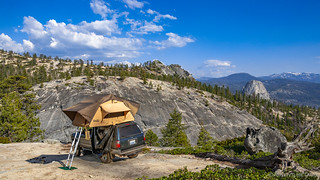 This is the life. 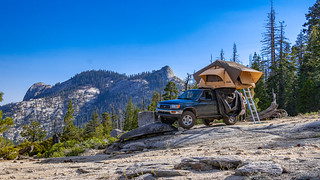 This formation looks more like Bears Ears than the National Monument. At least, IMO.

All settled in, our first order of business - before the sun went down and things started to cool off - was to head down to the swimming hole for a quick dip. Well, really more of a hop-in, think-better-of-it, and hop-out - given the cold water temps from spring snow melt! Still, the creek was as alluring as ever, the noise it makes over the granite so mesmerizing! 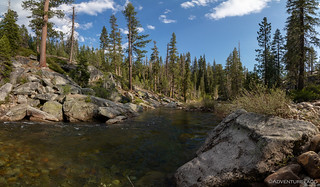 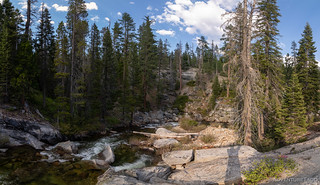 Our quick rinse - and clean socks-and-undies change - complete, the three of us headed back to camp. Slowly. See, the light was amazing, and it was still spring here - which meant there were wildflowers everywhere, and there was no way we were not going to admire them in the evening sun! 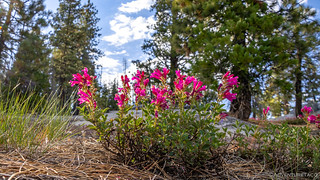 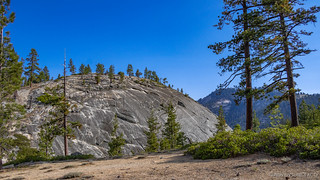 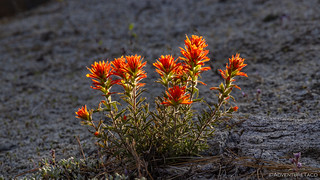 Though it seemed like mere minutes, it was an hour later when we finally found ourselves back in camp - the sun now behind the hillside and trees, the slight breeze soon to change direction and start flowing down-canyon.

The views, as nice as ever. 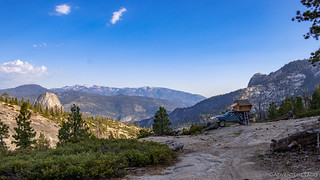 The only downside - as we all retired to our camp chairs and contemplated dinner - was the cloud of mosquitoes that swarmed around us as we ate. Luckily, knowing we might run into this situation early in the season, @mrs.turbodb and I had brought along our Bug Jackets, which kept us mostly bite-free.

As happens when evening wears on, temps drop a bit, and the fire gets going, the mosquitoes eventually went on their way - back to their little vampire holes - and we all sat around the fire, enjoying the first of several nights in this special place - the entire landscape lit by a full moon rising in the east. 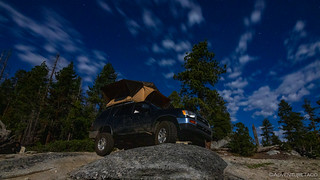 I'm not sure what it was that we talked about around the fire that night, but it was after midnight when we finally said our goodnights, Pops continuing to add "one last log" to the fire several times before retiring for the evening.

What the next days would bring, we weren't sure - but how could it be anything but splendtacular in a place like this?!

We Discover Tip of the Spear - Escape to the Sierras #2