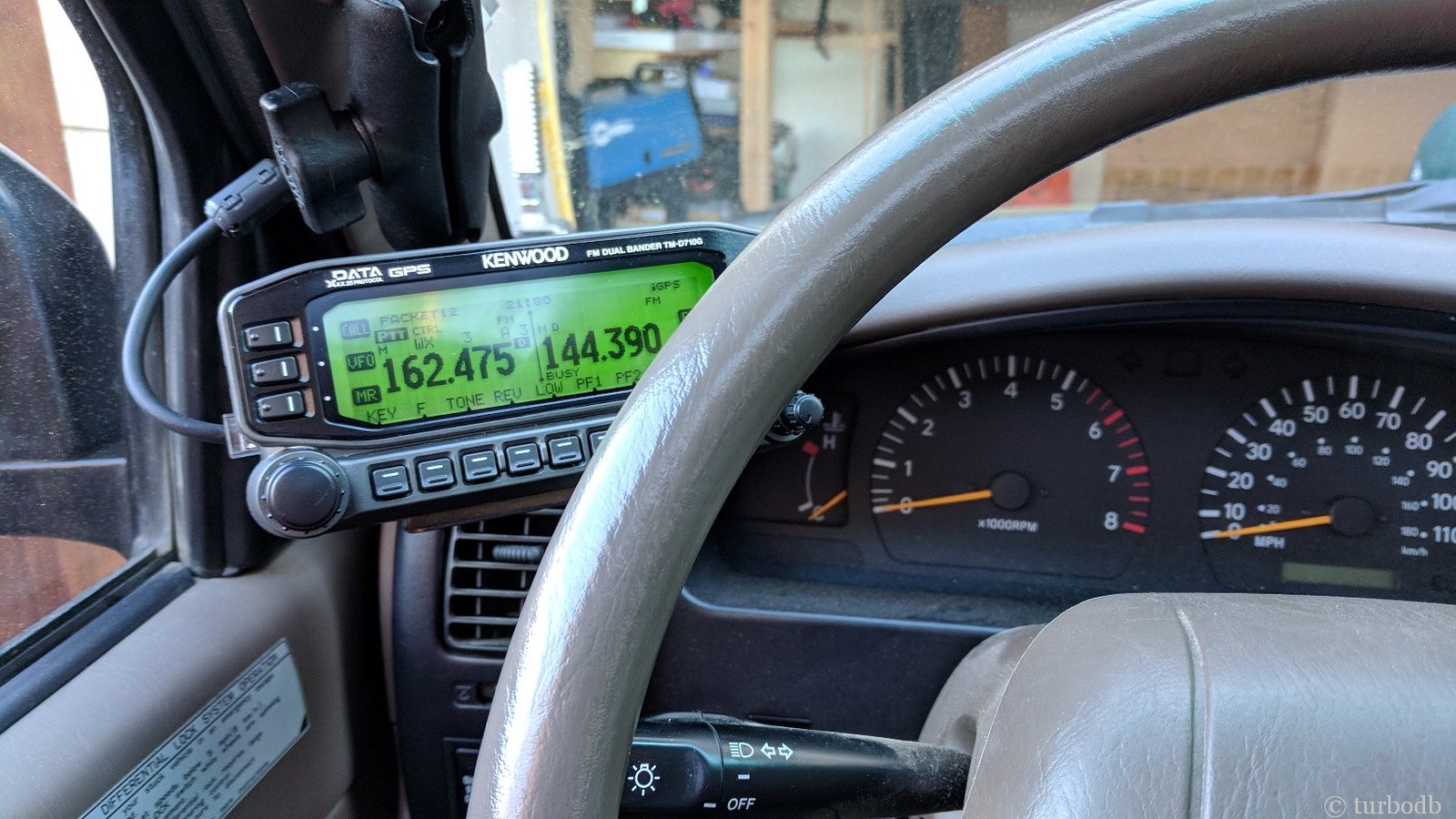 Where are you? Adding APRS to the Ham Radio Comms

It wasn't all that long ago that I got my Ham radio license and installed an Icom-5100 in the truck. A great radio, it's gone now - because a great radio isn't all I need; I need a great radio that can also do APRS.

What's APRS and why's it so important?

APRS is the "Automatic Packet Reporting System," a machine-parsable protocol used on a known frequency (144.390 in the US) to send all kinds of information from one ham radio to another. But the reason I care about it is that it's can be used to report position information for a mobile ham station. With that position information, others locally (within range of your broadcast), as well as remotely (once your broadcast is received by an internet-connected receiver) can see where you are, and where you've been. 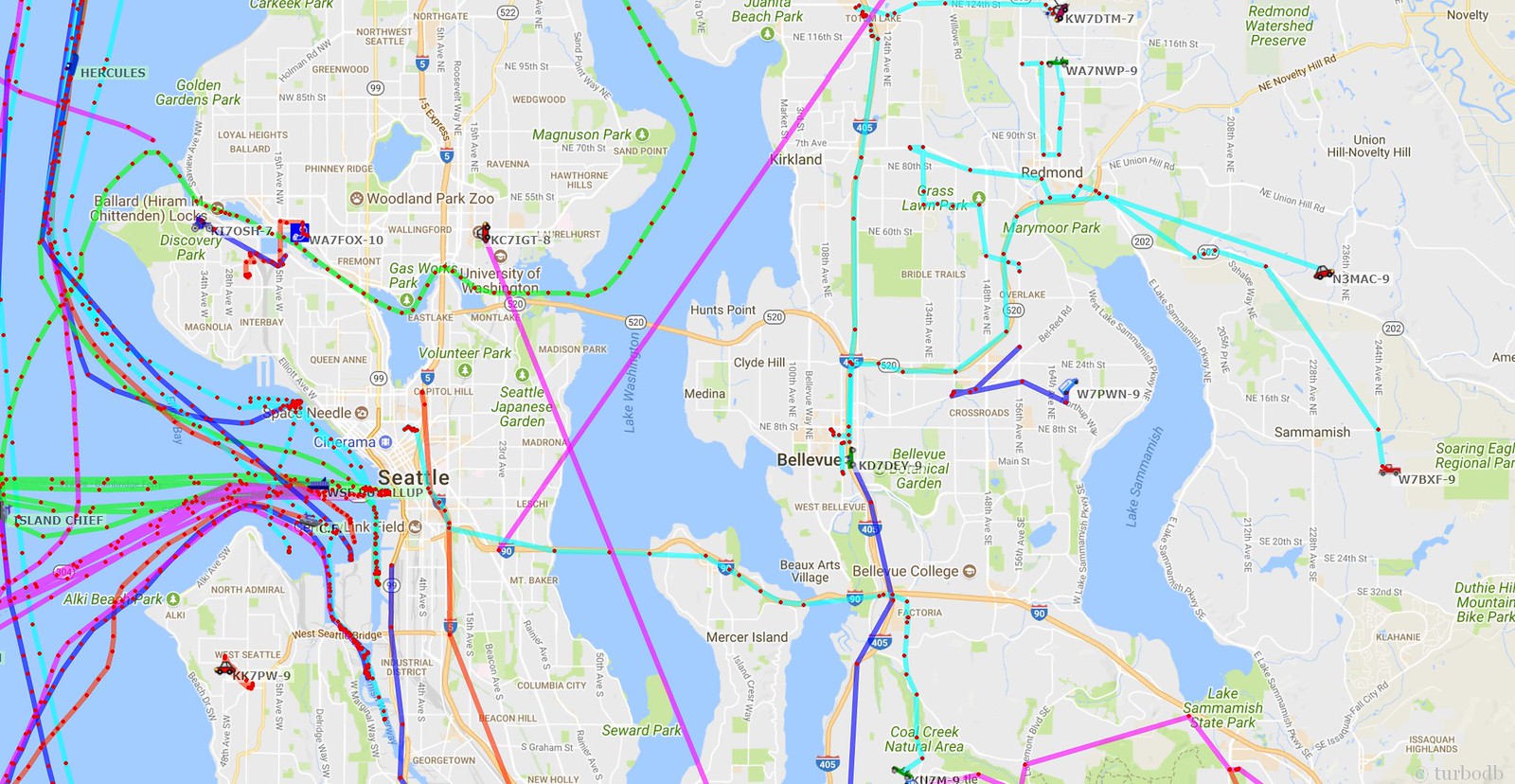 That's especially useful for someone who does a lot of remote adventuring for two reasons:

So, as much as I liked the interface on the Icom-5100, it was time for it to go - because there wasn't a great way to get it to do APRS.

Another great question. You are a savvy reader. Bringing your A-game as it were.

To do APRS, you need a little device called a TNC that is essentially like an old dial-up modem. (Remember those weird tones - you know "Pshhhkkkkkkrrrrkakingkakingkakingtshchchchchchchchcch*ding*ding*ding"?) The TNC is sending your position data in those tones to all the other ham radios within range. So you need a radio that the TNC can "plug into, and send the tones through."

Now, there are lots of different TNCs, and there's probably one that worked with the Icom-5100, but I had more requirements - specifically two:

So that pretty much meant that there was only one TNC that I could really use - the Mobilinkd TNC2. Conveniently, the way Mobilinkd works, it requires a connection to an Android tablet (generally running APRSDroid) which is where position information is retrieved from - via the tablet's GPS, as well as where other users' positions are sent - and displayed on a map.

Except now I needed a ham radio that would work with Mobilinkd (because it doesn't work with the Icom-5100).

Of course, there are lots of those too, but I've been spoiled with the Icom, so I wanted a dual band mobile receiver with a detachable control panel, and a relatively high-resolution display (not just calculator-style numbers). That narrowed the field considerably to something like the Yaesu FTM-400XDR or the Kenwood TM-D710G, since other front-runners like the Kenwood TM-V71A have all the necessary functionality, but not a great display. 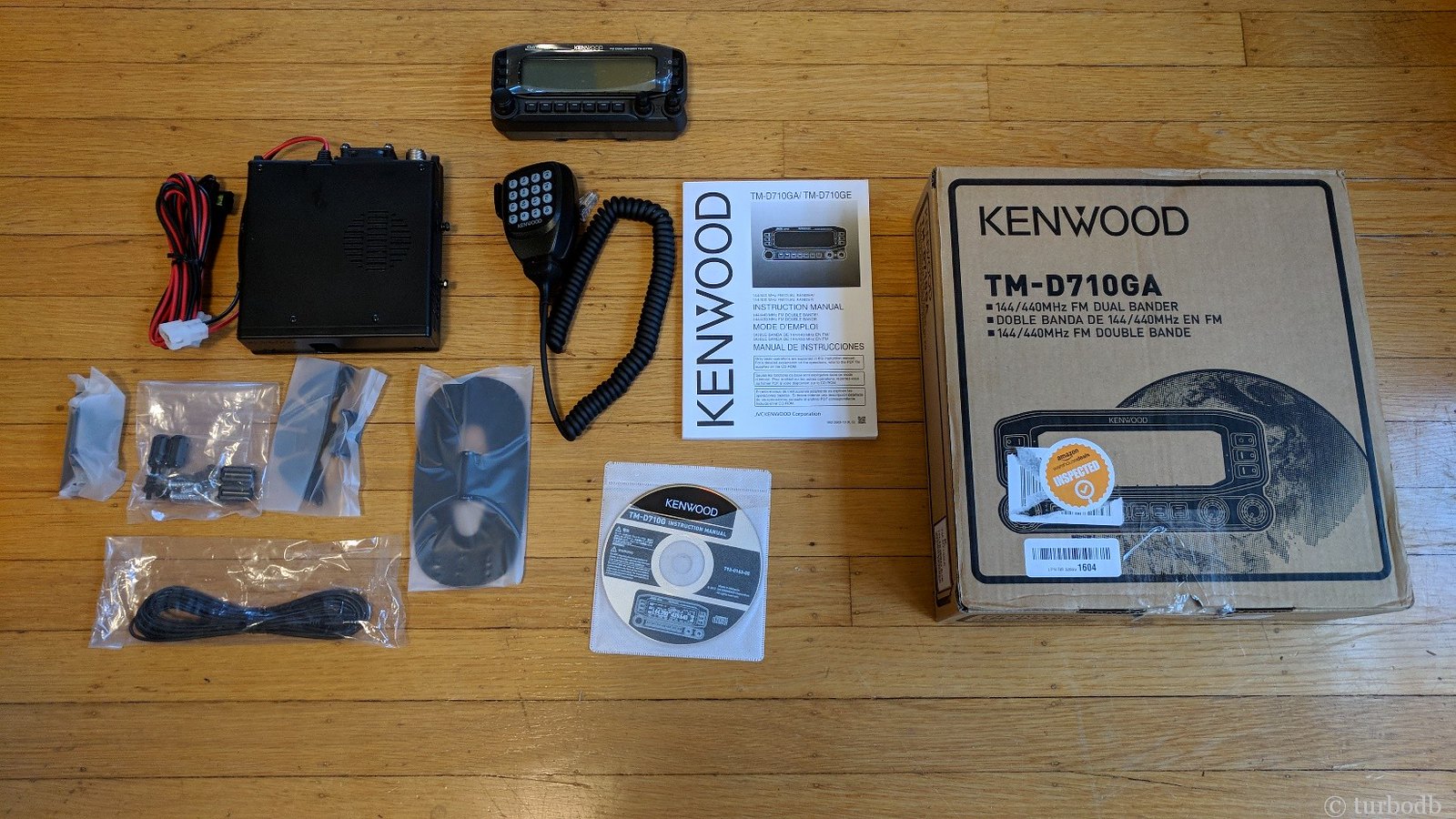 I was pleasantly surprised by all the goodness that came with the Kenwood. Unlike the Icom, it came with a mounting bracket for both the receiver and control head - so I got started by mounting the bracket under the passenger seat, and then mounting the radio in the bracket - so much nicer than the Icom, which I just left on the rug under the seat! 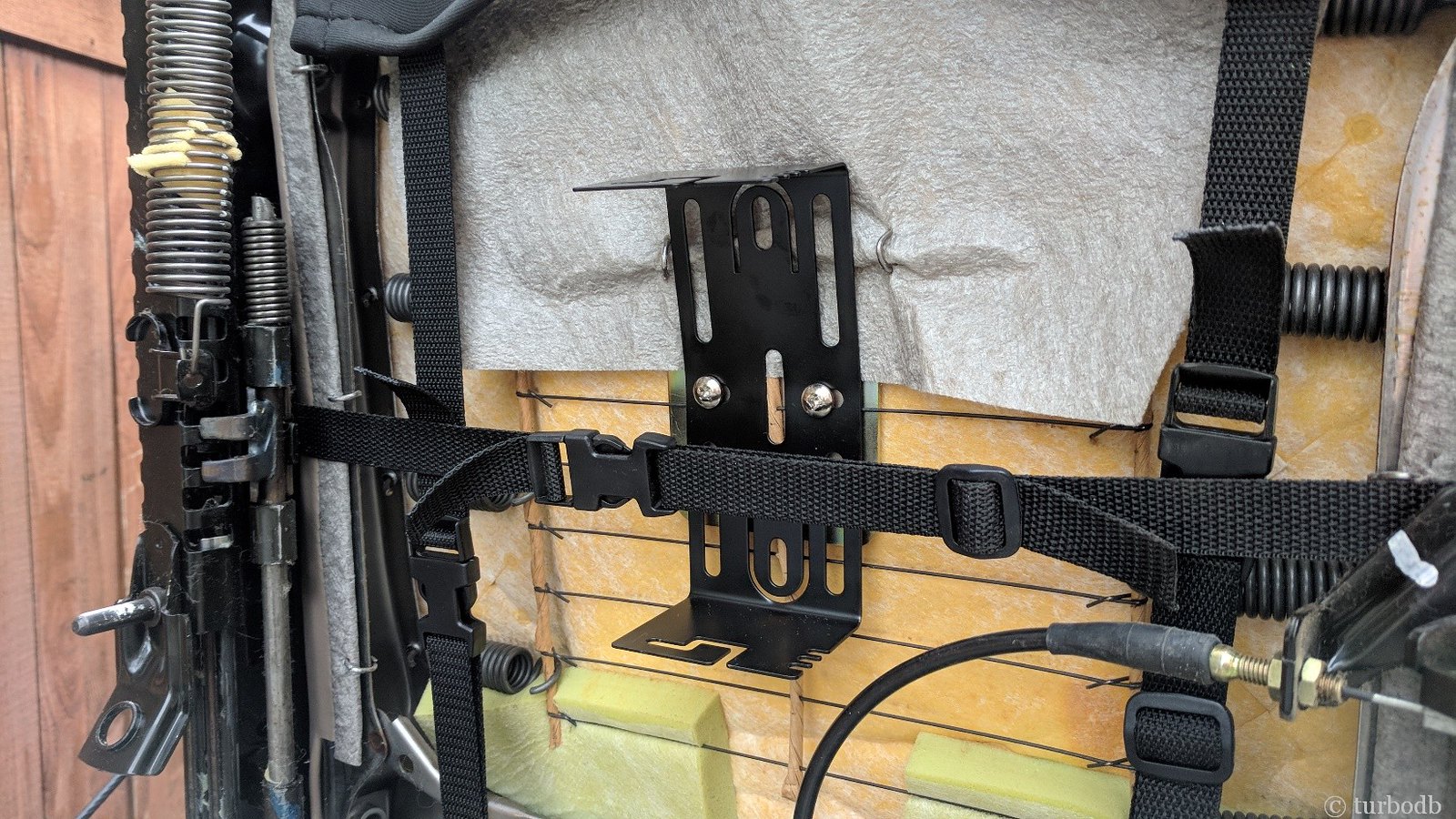 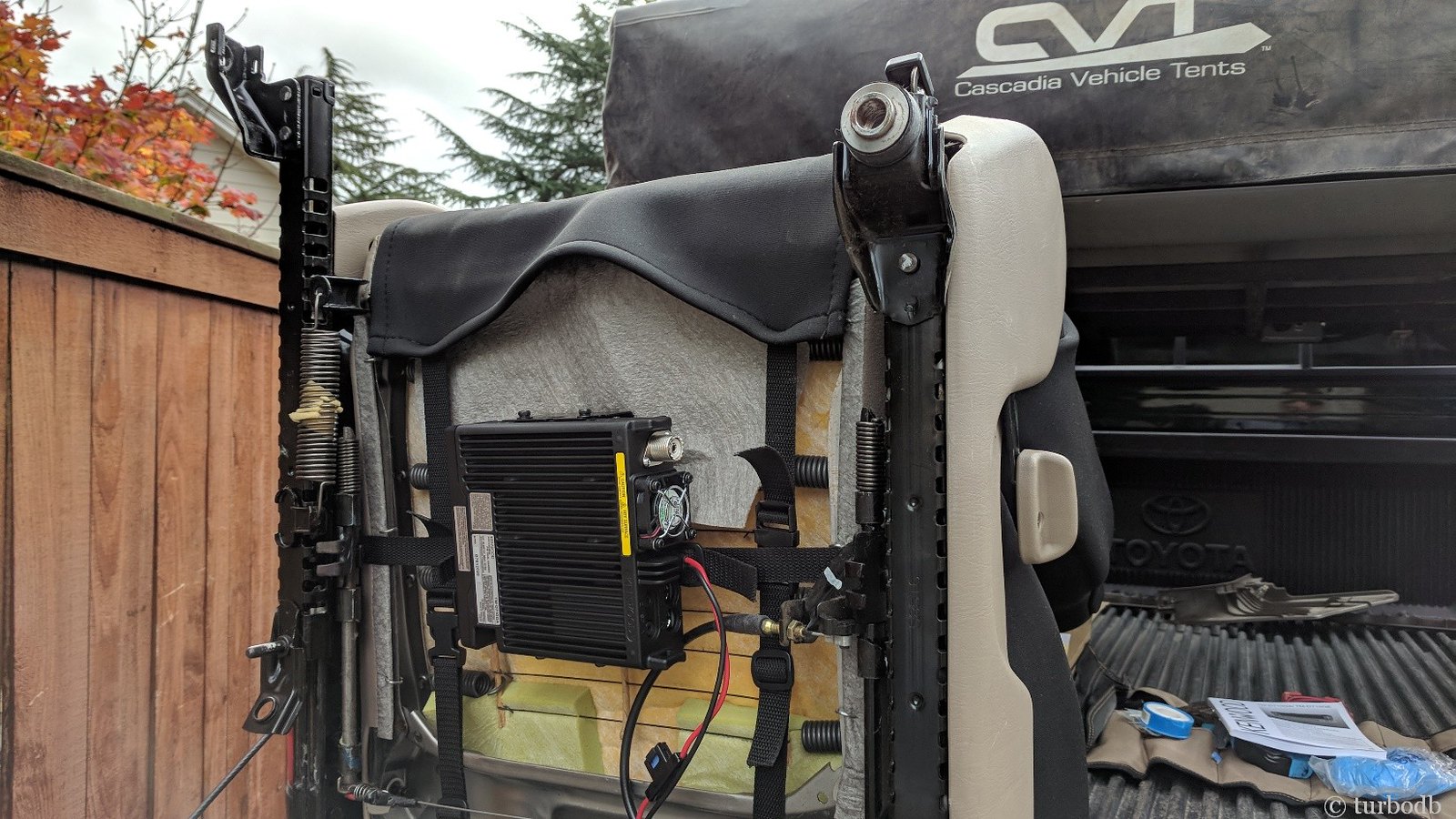 The rest of the cabling (antenna, power, etc.) was all pretty much the same, so I was able to utilize all of the existing wiring - woohoo! 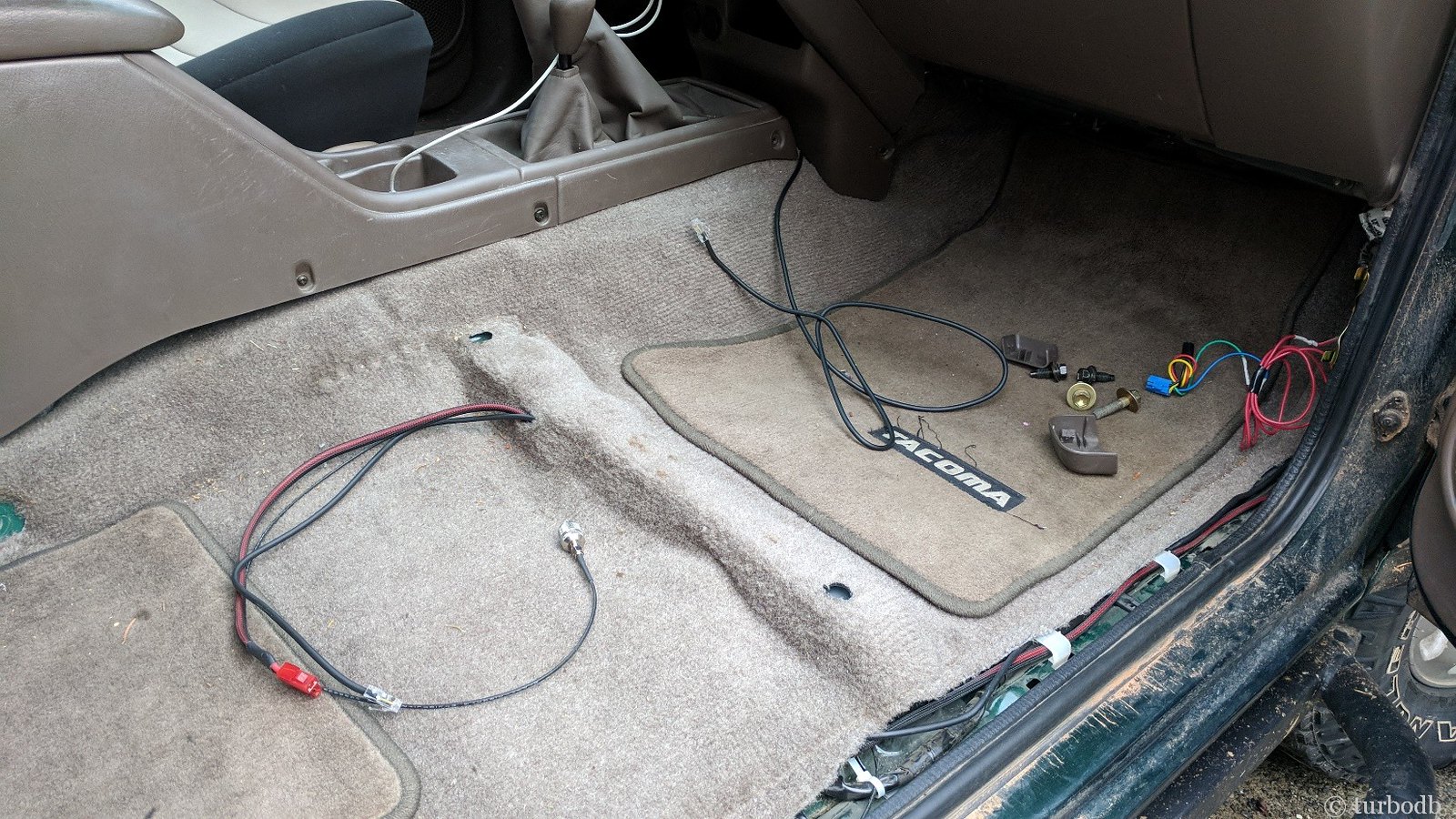 Bolting the seat back in was all that was necessary to complete the setup of the radio, which is now up and out of the way under the passenger seat. 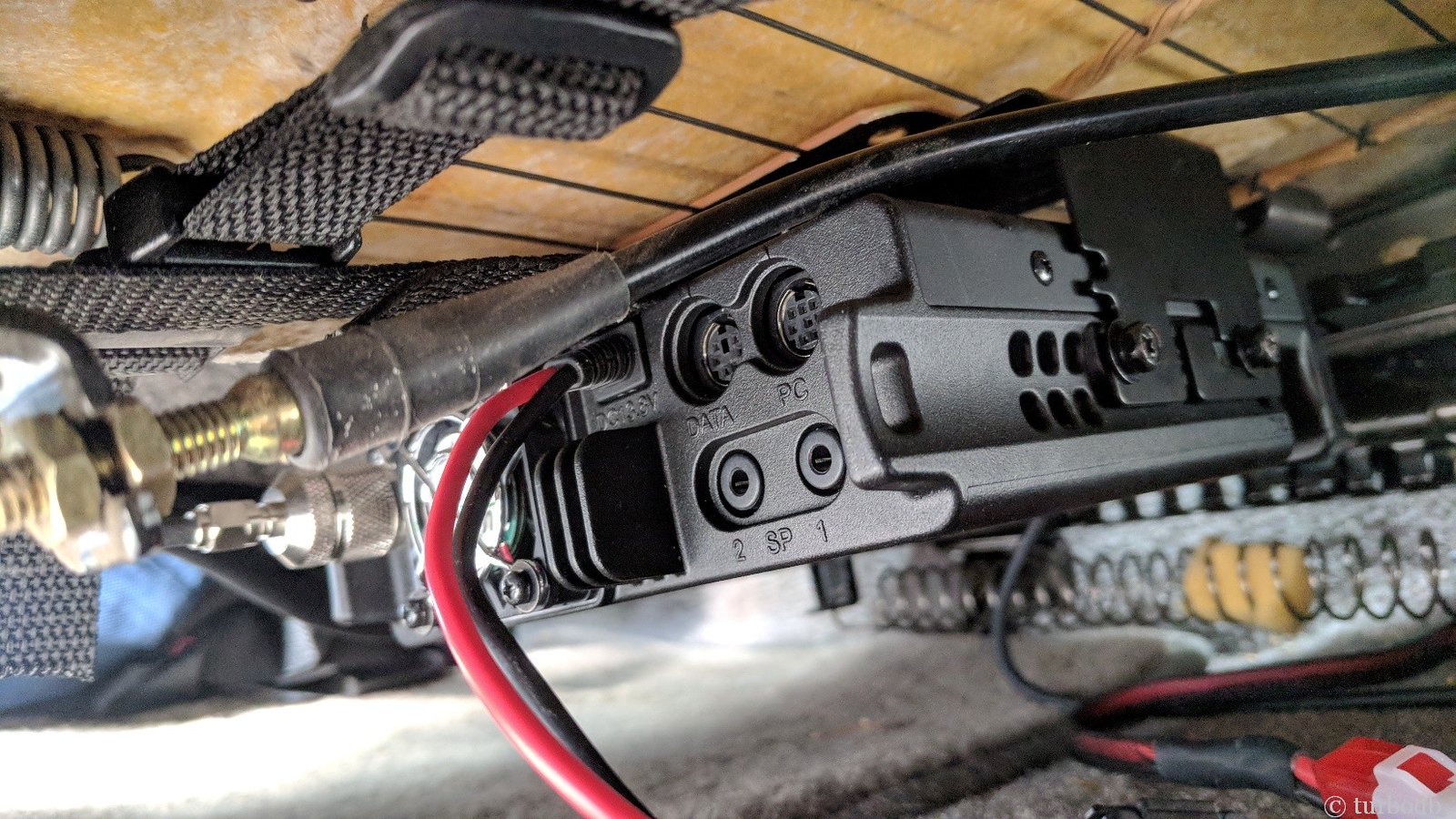 The head unit got mounted on the new Ram mount I installed, just left of the steering wheel, and below the dash line.

Of course, I also had to buy a Mobilinkd TNC2 and miniDIN-6 data cable to make the whole system work (the way I wanted). This is an "optional" step, since the Kenwood has APRS functionality natively built-in to the radio - but a good one because while the Kenwood APRS tells you "who's out there" and their direction away from you, it doesn't have a map view. 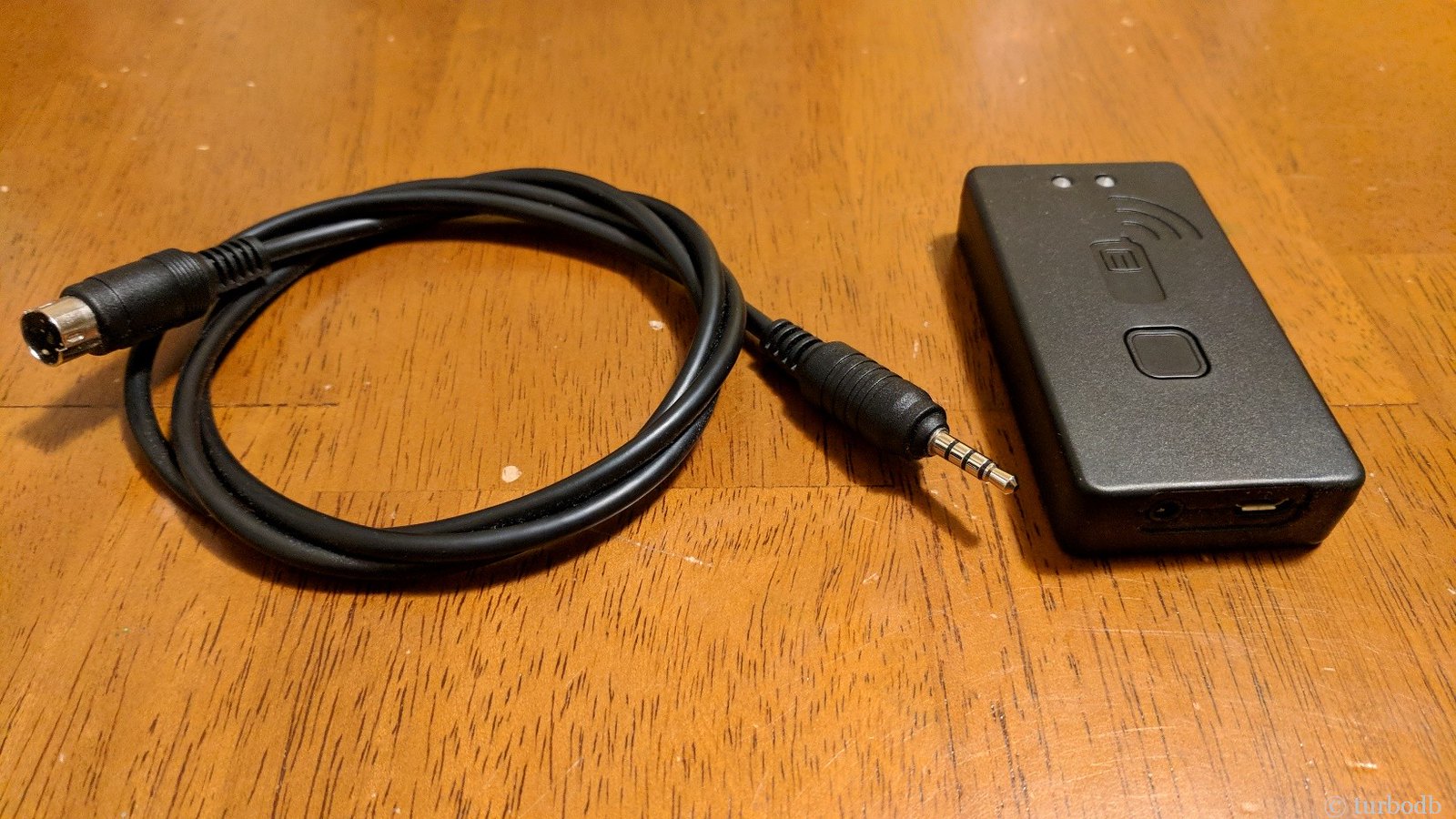 Once I had everything, I was ready to install, which is super simple. First, I ran a USB power cable from the dash to the area under the passenger seat where the ham radio now lives and plugged it into the TNC2. Then, I plugged the MiniDIN-6 data cable into the Kenwood D710G's "DATA" port, and the 3.5mm plug into the TNC. 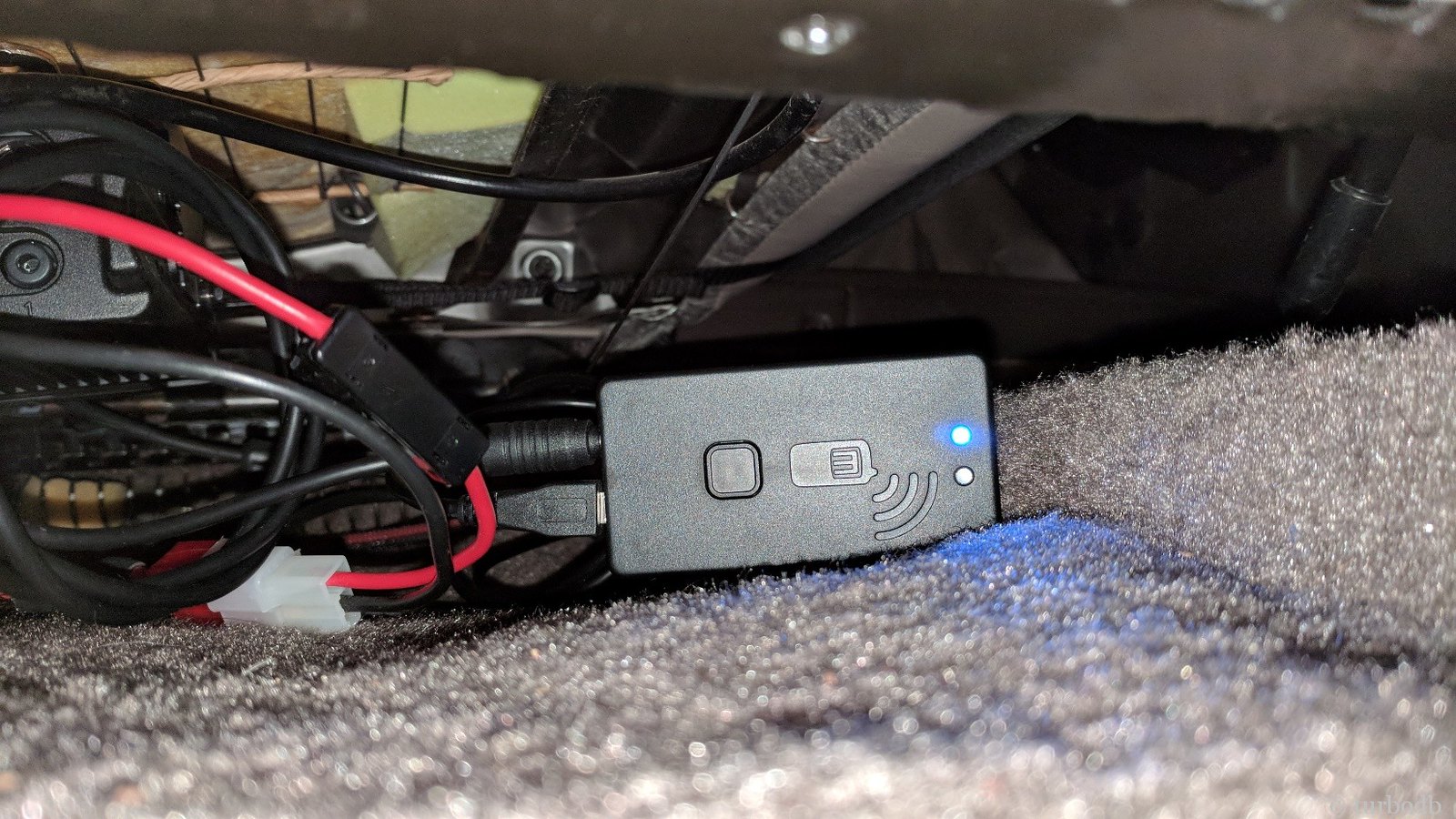 Finally, it was time for configuration of the radio and TNC. I stumbled my way through this part by reading various other folks experiences, so I don't know if this is the optimal configuration - but it works for me for now. I'll likely tweak it over time as I figure out how often this is trying to send my beacon (position) information. Configuration is done with two pieces of software on an Android device (that supports Bluetooth):

Use the Mobilinkd TNC Config first, to do the following (much of this from the User Guide)

Next, configure APRSDroid to send and receive position data through the TNC2:

That's it - everything's configured and ready to go. To start tracking your position (and seeing other people's position), back out to the main app screen and tap on "Start Tracking." Now, you can use any of the three main screens to see APRS information. The List screen shows all of the APRS stations (radios) that are broadcasting. You can tap on a station to see more information and communicate directly with that station. 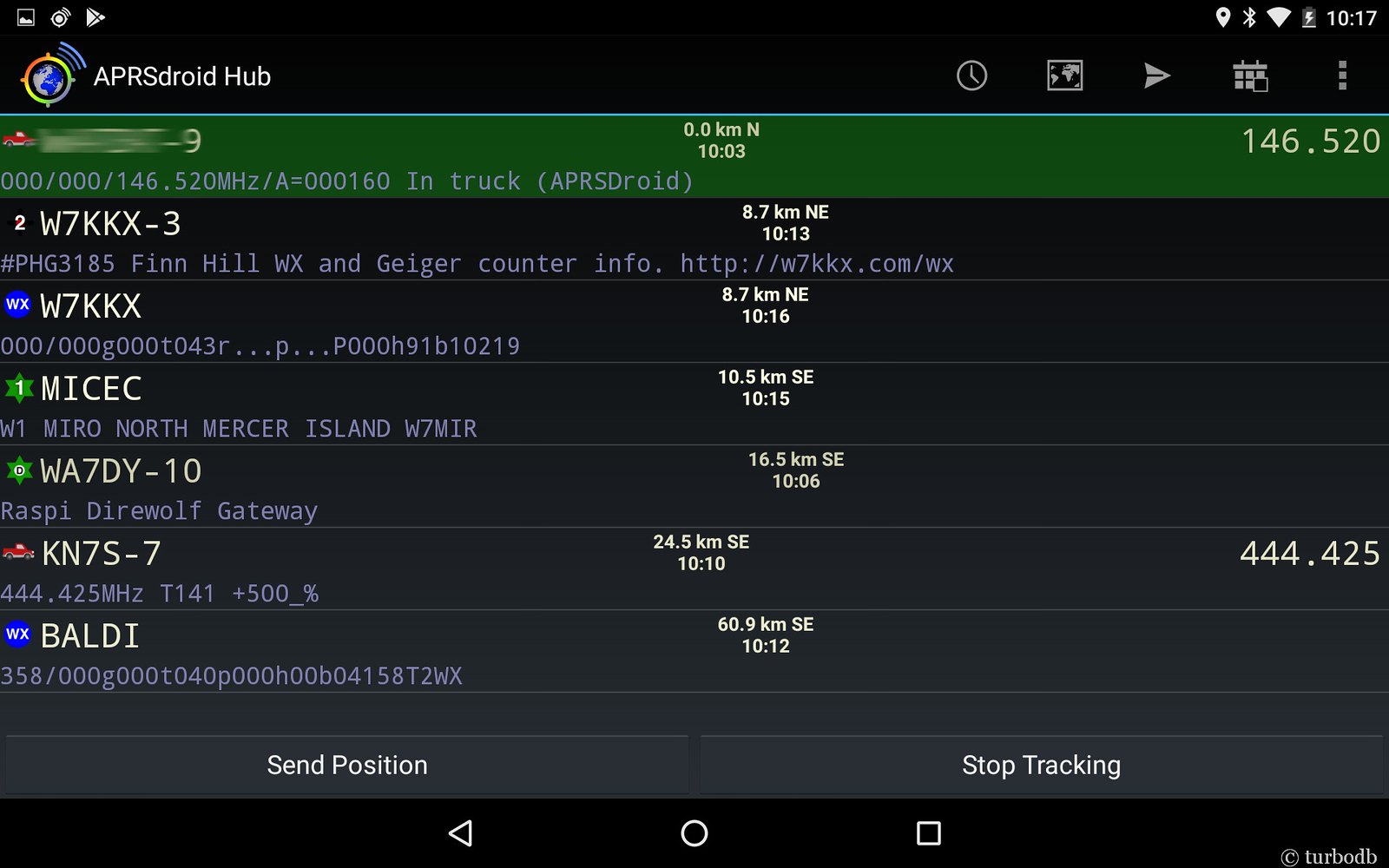 The Map screen shows all of the APRS stations that are broadcasting on a map. This is the screen we want most of the time! 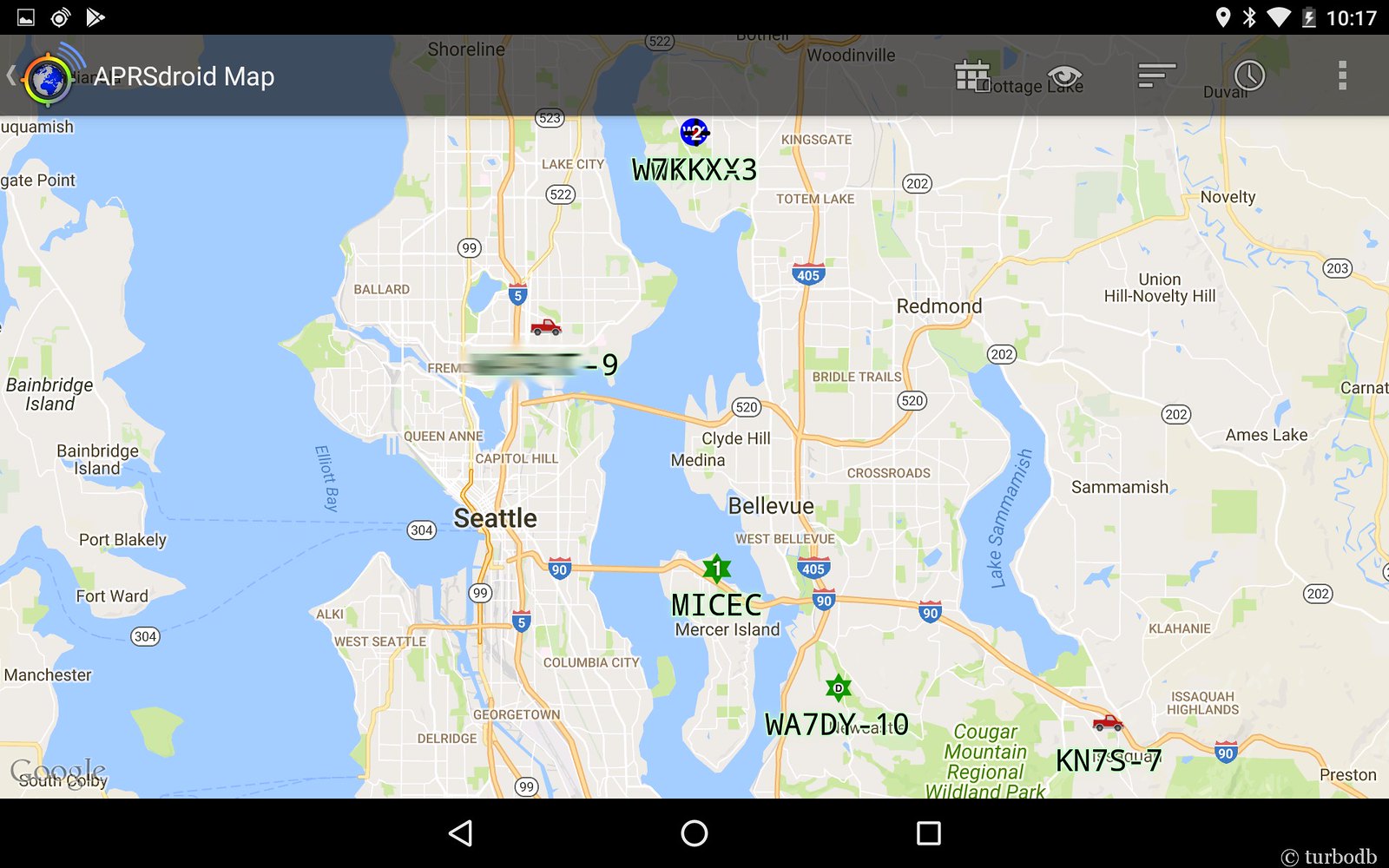 The Log screen shows all of the APRS information that is being sent/received, and can be useful when debugging cases where data may seem to be missing. 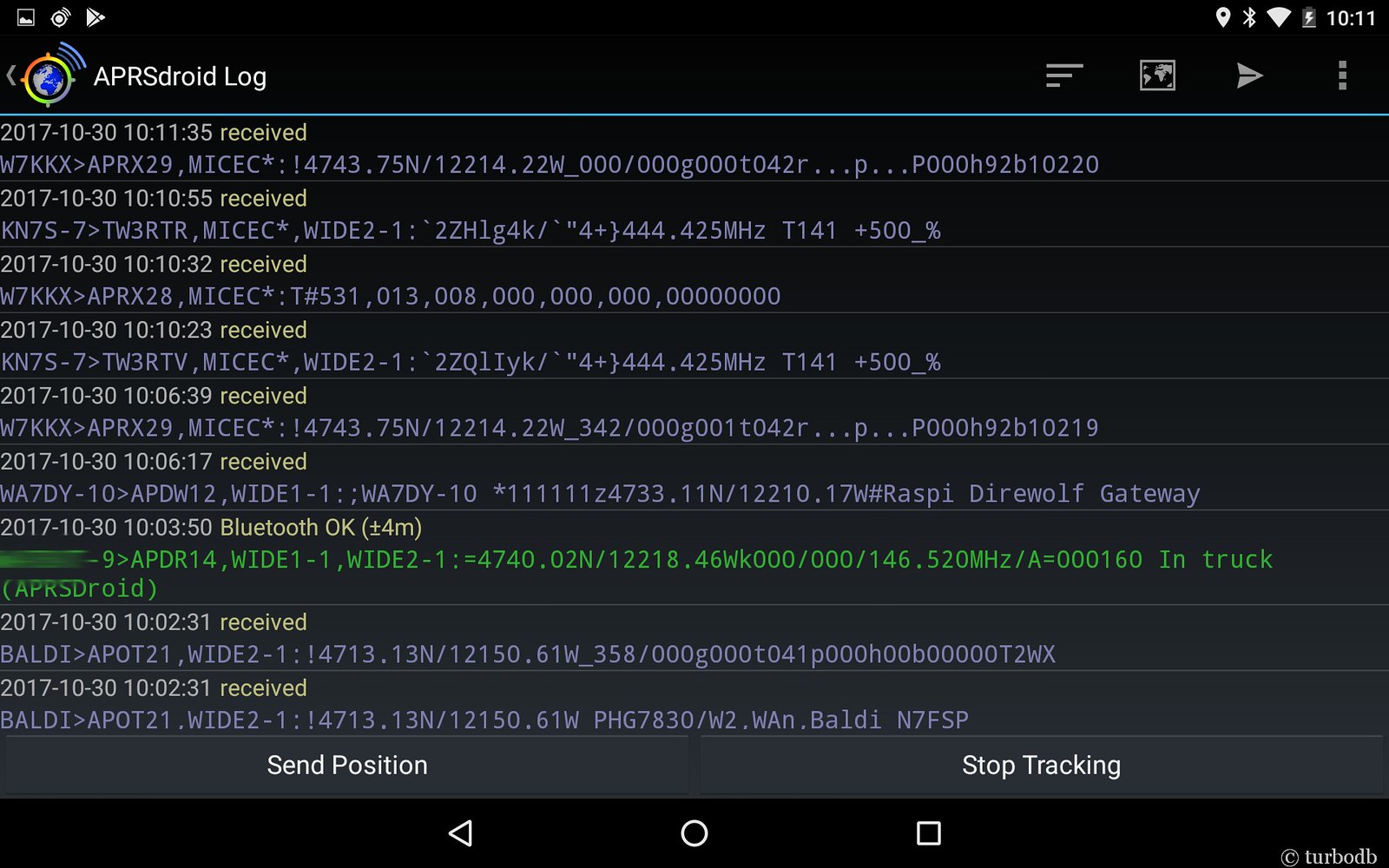