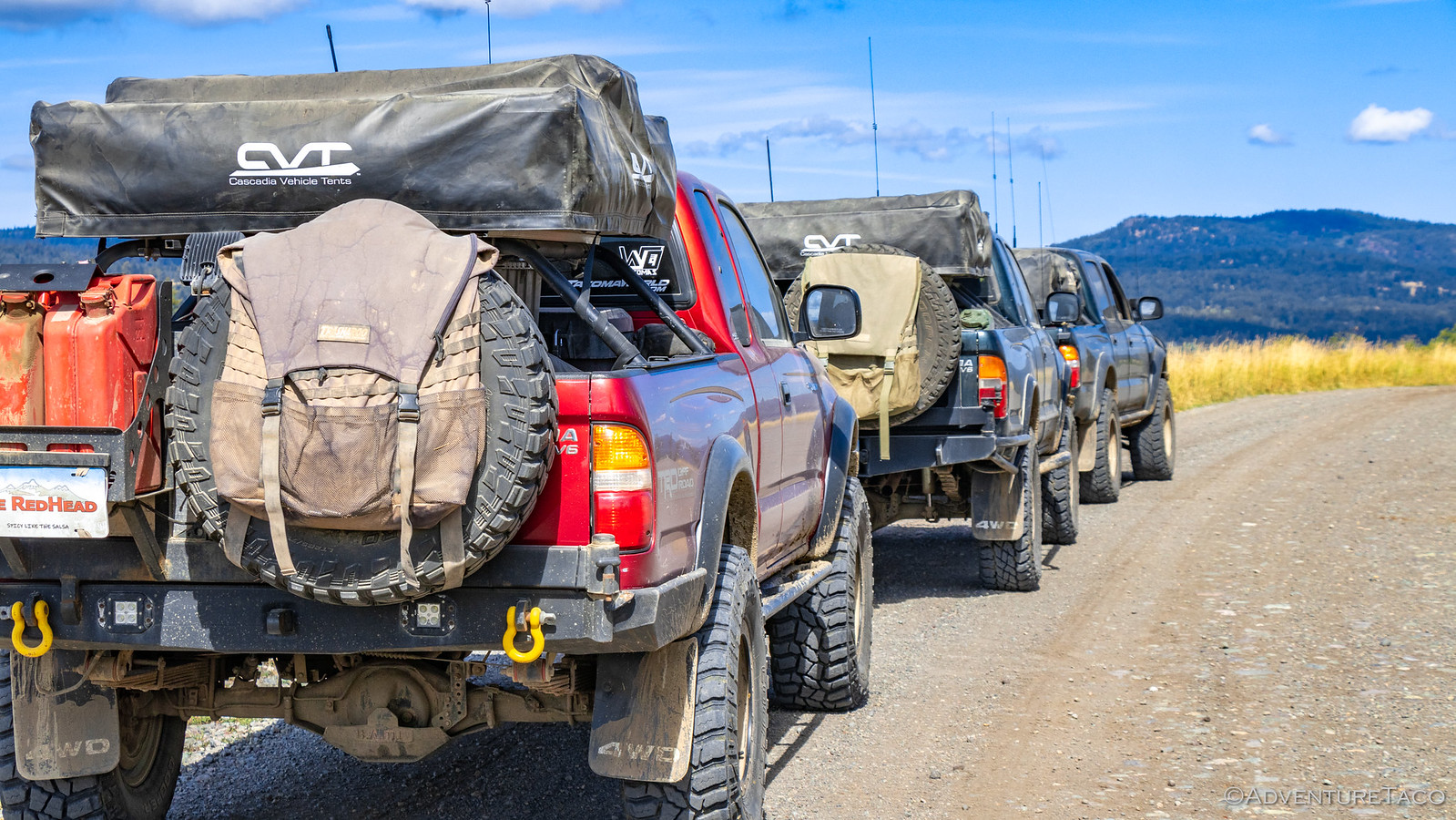 As expected, there wasn't much sunrise to see and we all had a good sleep-in on the edge of Whitehead Reservoir. Turns out it wasn't just the fact that we had a hill to our east, but also the fact that it was reasonably overcast - a few minutes of light rain even falling on our tents about half an hour before 8:00am. Still, I could tell it was going to be a beautiful day. 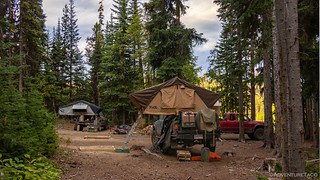 In no real rush, but also with no reason to hang around, we ate our breakfasts and packed up our stuff. Oh, and we had a discussion about huckleberries - and whether they were a hoax or not - since Mike @Digiratus and Monte @Blackdawg had never seen any!

We also grabbed a small portion of the cord of firewood that was still remaining and headed west on the trail. 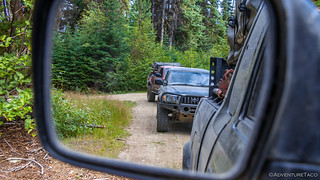 Our destination was Molybdenite Peak - a place I've been wanting to visit for more than two years at this point. With beautiful views and a scree field to traverse, it has all the makings of adventure and excitement that I look for in a trail. For now though, we made our way through more of Canada's evergreen farm, the Lodgepole Pines obviously harvested and re-grown over the years. 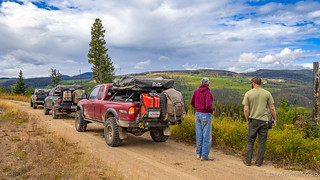 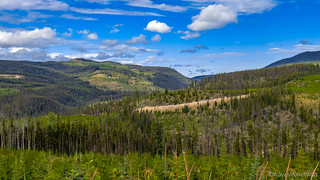 The roads here were reasonably well graded - except for a few sections with potholes - and we had a fun time cruising through the corners, dust trailing behind. It did mean a bit wider spacing, but with Ham radios all around, that was no problem at all. 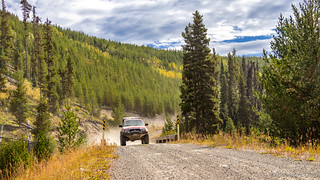 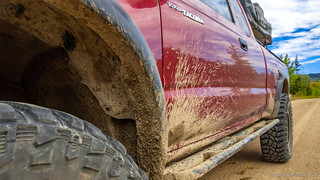 Even at higher speeds, there were plenty of photo stops - Monte often ending up in his trademark pivot around some turn or at the end of some straightaway. I couldn't help but follow suit, which got the desired laughs from Mike as he pulled up on the two goobs. 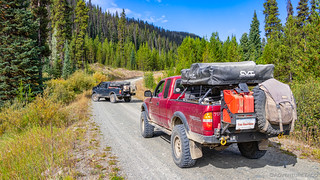 And then, a trip-changing discovery. As we were wrapping up photos in this exact location - and frankly, as Mike was likely wondering how he could get around us so that he didn't have to put up with our shenanigans - I happened to glance down between the spokes of my rear driver-side wheel... and what I saw took the air out of my sails.

I saw fluid on my brake drums. 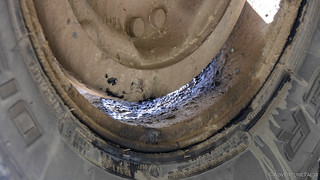 Having just dealt with this on the 4Runner the day before leaving on this trip to Canada, I knew what it was immediately - my axle seal had failed, and I was leaking diff oil. It was a no bueno situation.

I keyed up my CB radio and told everyone to hang on a minute while I confirmed what I already knew, and as I stood up from the rear of my truck I raised my hands victoriously above my head for Mike to see. Sarcastically, I boasted, "Guess who get's to install new axle seals again?" which of course he couldn't hear because he was inside his rig with the music pumping away.

I let Monte know as well over the radio, and that was enough to both buds out of their trucks and poking around the rear of mine.

OK - this is where the story morphs a bit, depending on who's telling it. As I recall, I was ready to keep going to Moly Peak - the excursion there adding some 80-100 miles to the length of our trip - with another 300 miles or so to get home. As far as I was concerned, that was probably few enough miles that I wouldn't totally hork the axle bearing, and I could just fix it when I got home. Mike and Monte on the other hand seemed reasonably concerned. Each of them have had axle seals go in the past, and each of them got only a few hundred miles before really starting to tear up their rear end; in Monte's case, requiring a tow by fellow TWers in order to get to a shop where the seals could be changed. Their strong recommendation was that I should head home as soon as possible.

Now, I'm not sure Mike and Monte would say that they really told me that I should go home. To them, it was more like a, "Well, here's what happened to us in the past, you make your own decision."

Whichever way it happened, and perhaps obviously apparent from the title of the post - I did ultimately decide to head home rather than continuing on to Molybdenite Peak. For me, the reasoning was threefold, which I'll capture here just for the sake of posterity:

So, we took a look at our maps and found the place where I'd head south - right where our road crossed BC-5 - some 25 miles or so further west. And then, we picked up right where we'd left off - zipping along and having fun in the dirt, stopping frequently for photos and - I'd like to think - to extend the time before we split ways. 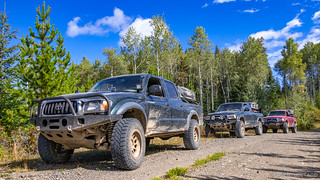 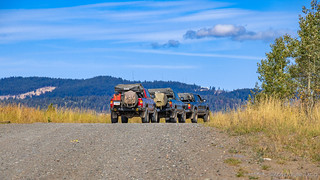 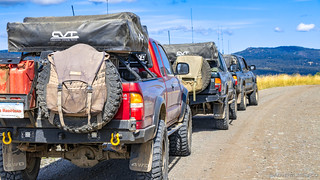 At one of our stops, a low-lying chopper flew almost directly overhead - our cameras clicking away like anti-aircraft artillery as we tried to capture it silhouetted against the bright blue sky. 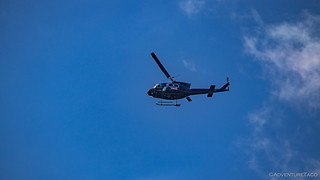 It was I think about six miles from BC-5 that we caught our first glimpse of big-rigs making their way up the grade on the paved surface. Still on dirt, we stopped for what I thought was going to be the last time - mostly to chat a bit, but also to decide that we'd stop once more for lunch before parting ways. 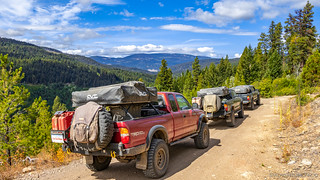 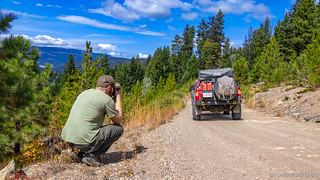 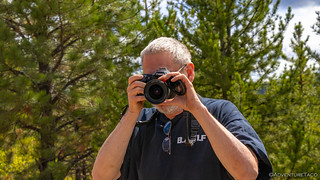 And so, with only a mile or two until the highway, we pulled over in a trailhead staging area where the pavement began and ate a meal that - just three hours before - none of us thought would be our last of the trip together. I offloaded the remainder of my chocolate chip cookies into Mike's cab - to keep them safe(r) - and aired up my tires. 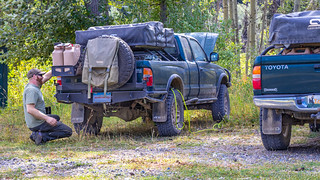 Safe travels, handshakes, and good lucks all around and we climbed into our trucks. As our road met up with BC-5, Monte and Mike turned north in my mirrors, as I headed south. It'd been a super-fun trip, even if it'd been cut short. And hey, it gave me an excuse to get back up in to Canada sooner rather than later! 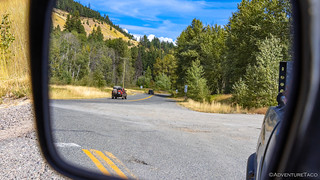 About two minutes after splitting up, my Ham radio came to life!

Mike: "And then there were two."

Monte: "I don't think we've ever been this few before. We had two trucks in Moab, but Devin was with us. So three."

...and to this of course, I couldn't resist.

Monte: (laughing) "Guess we didn't wait long enough to get out of range!"

We all got a good laugh out of that - since it is always the way of a group splitting up - and I wished them a good trip and great photos. As the chatter picked back up I listened as long as I could - long enough to hear that there was a bobcat carrying a squirrel across the road - but not much longer than that.

Now get out there and explore! 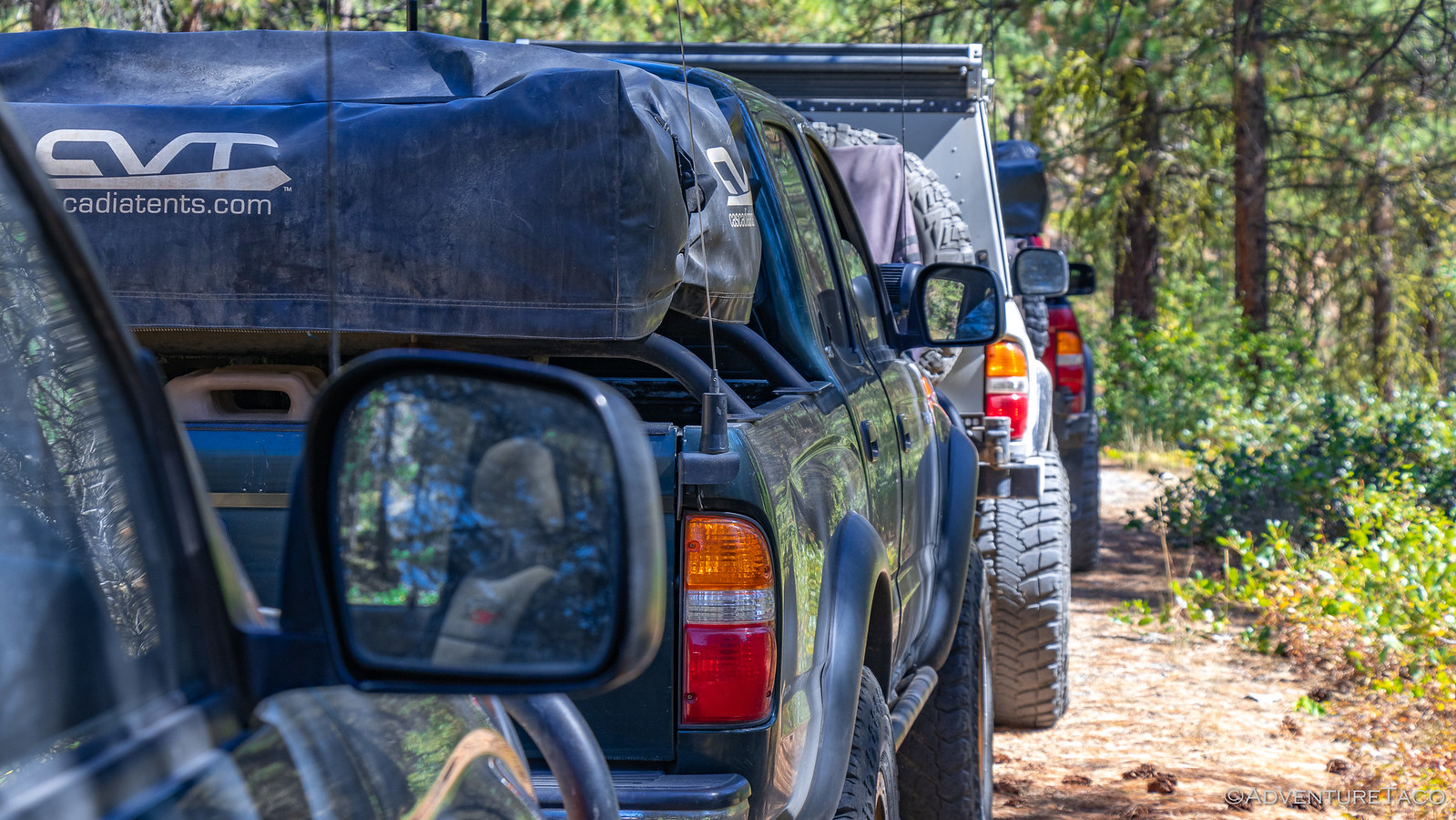 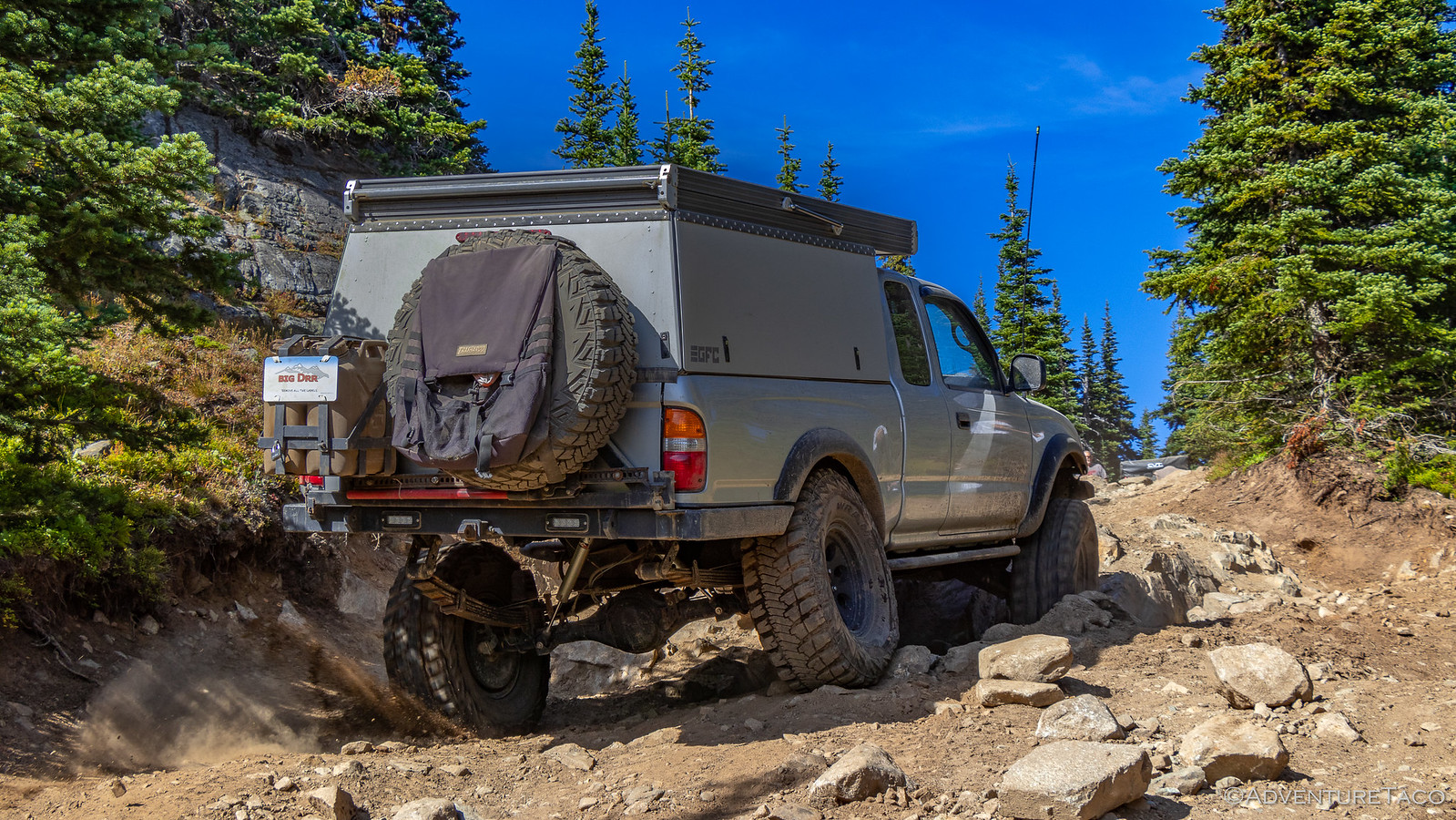 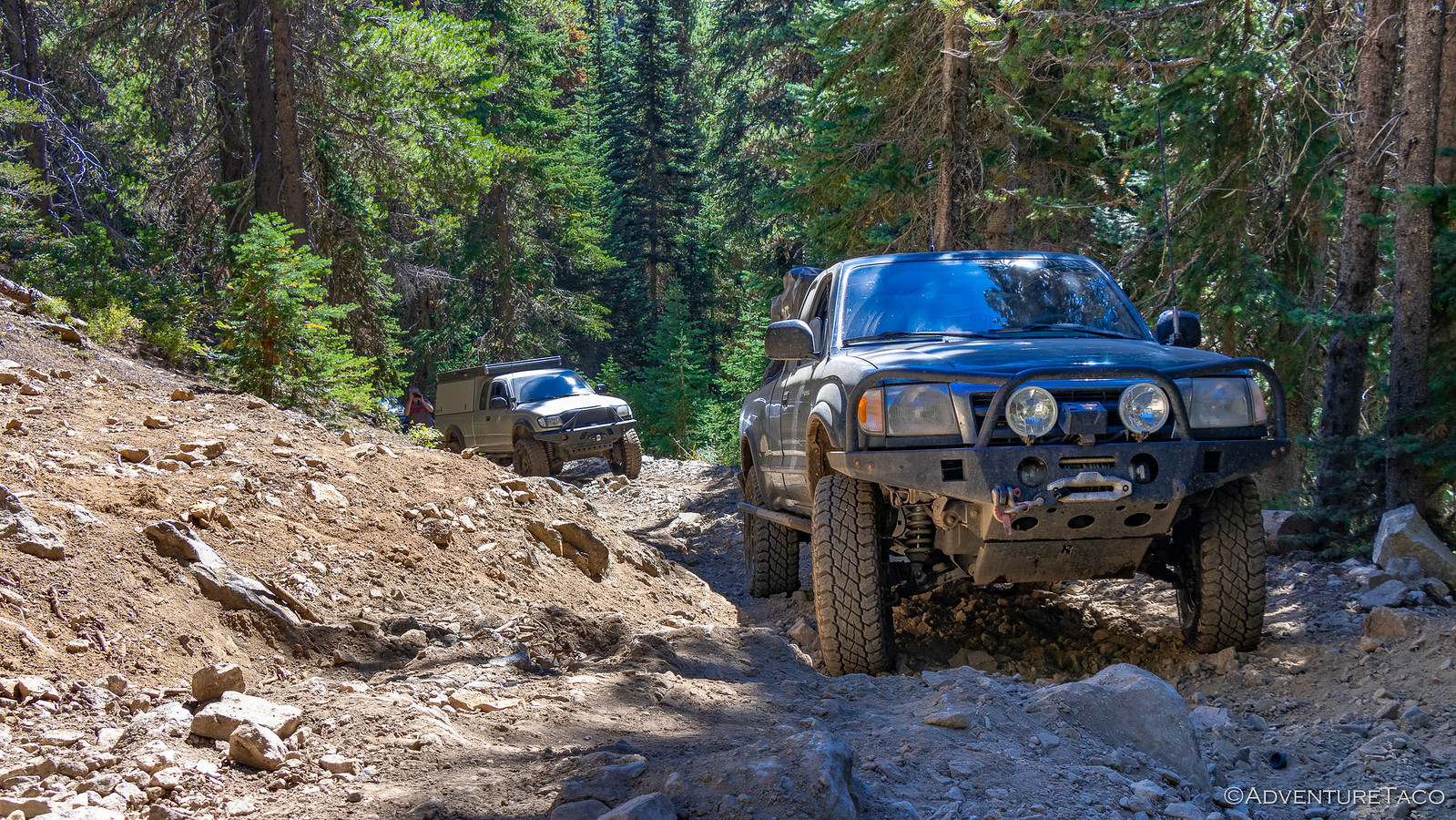