It was another whirlwind of trips through August and September, with three more trips and 21 more nights now in the books: The Whipsaw Trail in BC, Canada, a trip with Pops to the California Sierras, and a nearly two-week adventure through Wyoming and Colorado. Of those, the two driving adventures both ended early due to mechanical failure of at least one vehicle on the trip, so without further ado, let's get into what's bound to be a stunning rig review!

TL;DR - the hard brakes lines are working fabulously and I'm happy to have installed them.

After the brake caliper failure on the IDBDR, I evaluated the Tundra brake situation and decided to complete the conversion to a Tundra front end from a brake perspective. That meant installing hard lines to the calipers, and replacing some of the mounting hardware on the spindles. It's worked out well, and I am now a firm supporter of this method of connecting the calipers to the rest of the hydraulic brake system.

As a reminder - LCE charges too much for the parts to do this, and they are essentially the only supplier. I will sell you the parts necessary to upgrade your brake lines for significantly less than LCE. If you are interested, check out the store page here: Tacoma-to-Tundra Hard Brake Line Upgrade Kit. 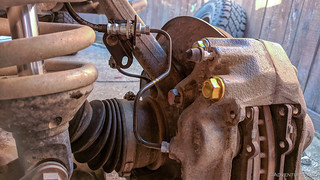 TL;DR - The rear axle seal replacement seems to worked beautifully and there is no more leaking at all.

My trip to Canada and the Whipsaw Trail was cut short when I discovered a leaky rear axle seal on the driver side. Upon my return, I replaced the seals using the Step-by-Step Guide to Replacing the Rear Axle Seals & Bearings I'd put together when doing the job on my 3rd gen 4Runner, and the project went off without a hitch. I hadn't driven the 4Runner much since doing the job, and the job on the Tacoma was done only a couple days before leaving for California and Colorado. I'm happy to report that through the entire 4500 mile journey, the seals worked flawlessly and I suspect will continue to work for another 100,000 miles or so. This is a job I entirely recommend doing yourself if you have the same problem - with the right tools, a little time, and the step-by-step guide above (which also links to the necessary parts and tools), it's easy and satisfying. Plus, you'll save yourself about $1000. 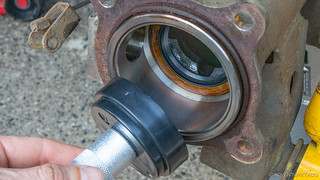 TL;DR - if you get cold hands/feet at night when it's cold outside, and would like to be warm and toasty in bed, these work great as long as they are exposed to air/moisture.

Perhaps even a year ago now, I purchased a box of Little Hotties Hand Warmers in the hopes that they would keep me warmer on really cold nights when we stayed up around the camp fire until way past my bedtime (midnight or so). I've used them a couple times since then, but I always tried putting them in my shoes as we were around the fire, and that never seemed to work - I think because they didn't have the necessary air flow to trigger the chemical reaction that gives off heat.

On the Colorado trip, I took a different approach. Instead of using them around the fire, I placed them in my socks when I got into bed. This way, they had more exposure to air. It worked great. They warmed right up and kept my feet warm for 8+ hours. That in turn kept me much more comfortable in bed. Will do again. 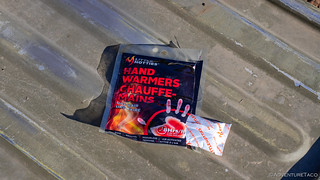 TL;DR - Moving the resis to the top of the frame means there is no more rubbing and I have my turning radius back.

It was many months ago that my tires started rubbing on the ADS reservoirs that I'd attached to the frame in the front wheel wells. This was a result of moving from SCS Stealth6 wheels to 4Runner 5-spoke wheels in order to reduce the amount of mud that was flung onto the truck in muddy conditions.

Until the trip to Colorado, I believed that my mounting location was the only one that the hose from the coilover to the resi would allow. However, I've since seen two other ADS owners who have installed their resis on the top of the frame, with seemingly positive results.

Also on the trip to Colorado, I noticed that the resis were starting to see significant wear from the rubbing. As such, immediately upon my return I moved the brackets and reservoirs to the top of the frame. This has solved the rubbing problem entirely, and though it's harder to access the resis when bolted to the top of the frame, I think it is a good long-term solution. 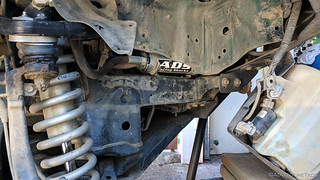 TL;DR - it's been about a year and my spherical bearings are getting squeaky; time to replace them.

My understanding is that these are COM10T bearings and that I can just look around on the internet and find the cheapest seller. Ugh, a plan like that always worries me a little bit.

TL;DR - The skid plates are holding up, but the mounting strategy could have been better. For the 3rd time, I'm modifying it.

I had some significant trouble with the Relentless skid plates on the last trip to Colorado. I've always had an issue with the bolts in the rearmost mounts on the mid (transfer case) skid loosening up over time - I believe due to the fact that the bolts simply thread into the <1/8" frame, which is just too thin to really secure them.

Additionally, I've had a problem a year ago where the crossmember mounts sheared off, and had to be rewelded to the skid plate.

Both of these things were a problem this trip, and I also apparently ripped both bolts out of the IFS mounts on the front skid. 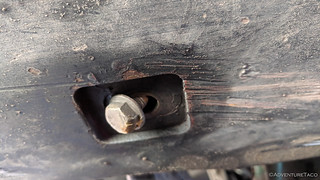 As a result, I'll be making the following modifications:

TL;DR - I have oil leaking from the transfer case where the front drive shaft attaches.

The truck is subjected to a lot of muddy water crossings and over time that muddy water gets in the various seals and things start to leak. That has happened on one of the transfer case seals, so I'll need to replace the seal between the transfer case and the front drive shaft. The part number for this is Transfer Case Oil Seal - Inner Front Drive Shaft (90311-41012) and I'll also need to replace the Transfer Case - Front Drive Shaft Stake Nut (90179-22016) at the same time.

The work isn't done yet, and I'm not overly worried at this point as the leak looks reasonably slow. 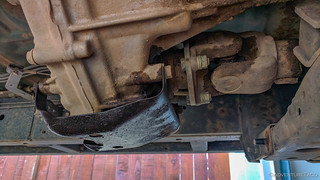 TL;DR - the truck is heavy at 5800 lbs loaded, and I need to find a way to shed weight. That's now on the project list for this winter. 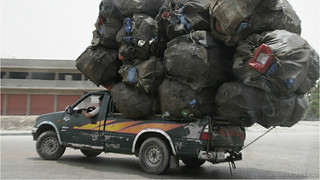