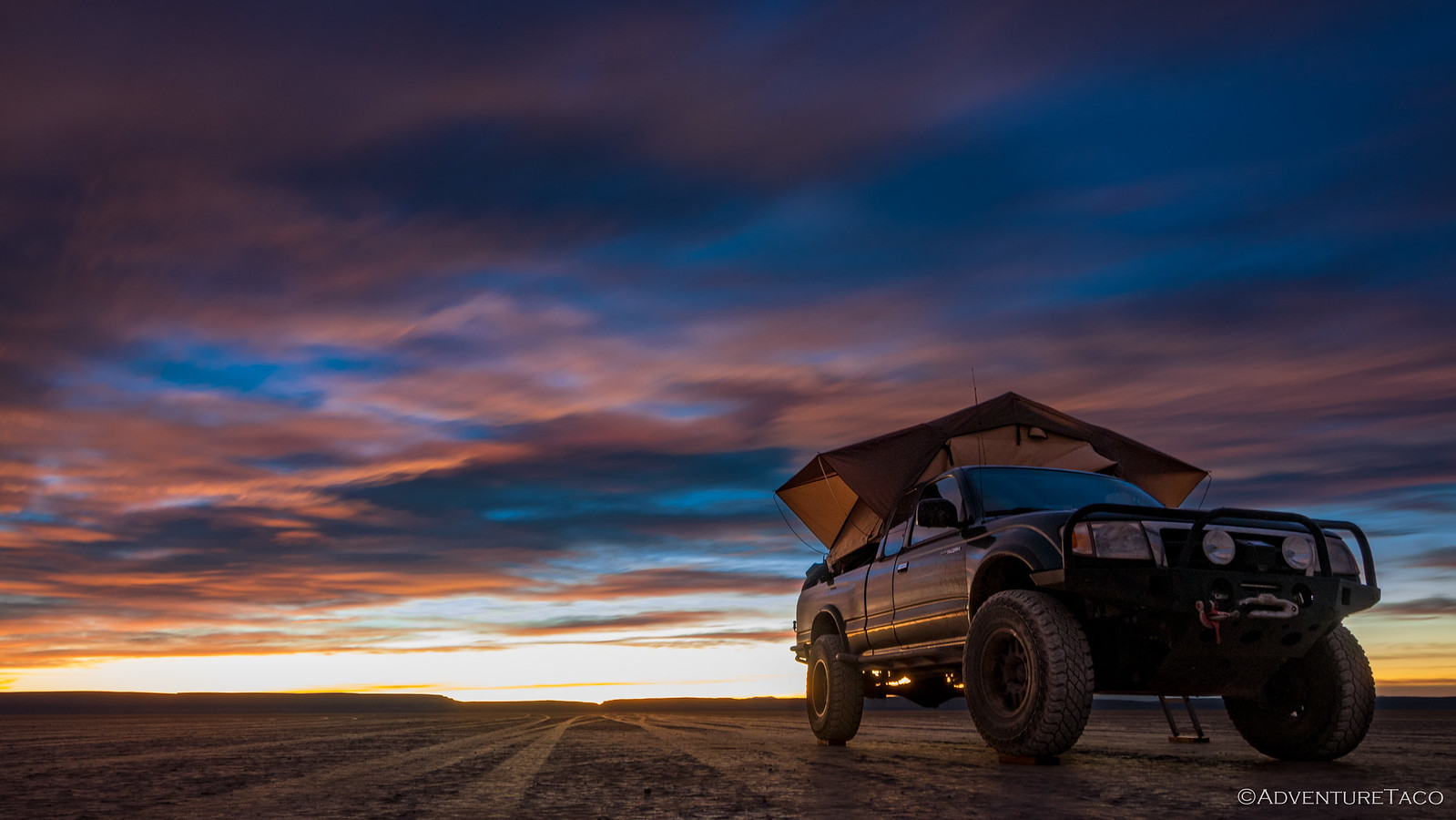 Our night on the Alvord Playa was uneventful - the wind picked up a bit around midnight, easily remedied by closing the door on the windward side of the tent. And, one of the nice things about winter - at least when you're camping - is that sunrise is a bit later. For us, it was nearly 7:00am before the light started on the horizon. 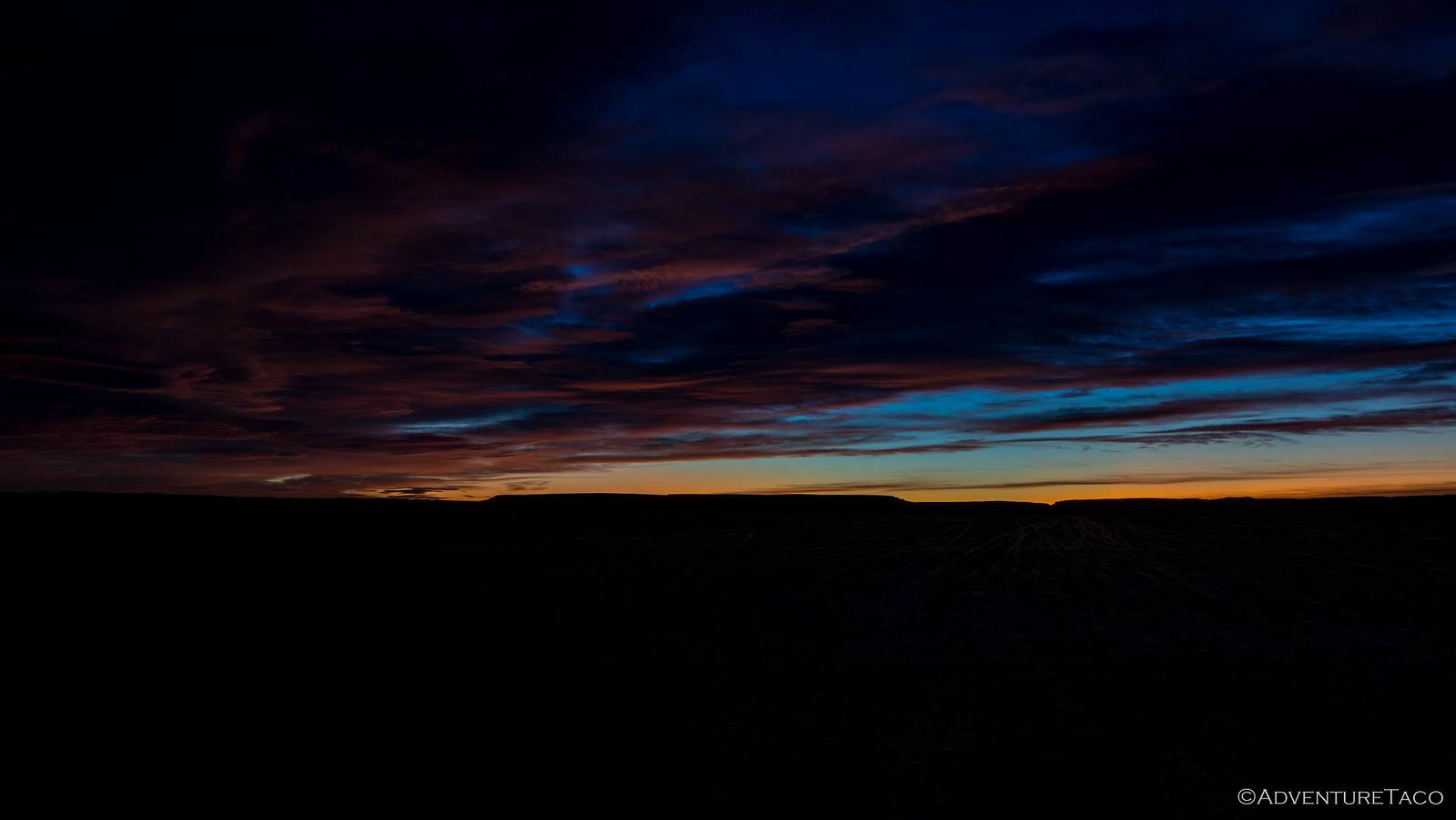 Clouds having blown in a bit overnight, we got quite the display as the long rays of morning sun played over their undulations, a rainbow of colors ranging from yellow to purple reflecting down onto the playa. 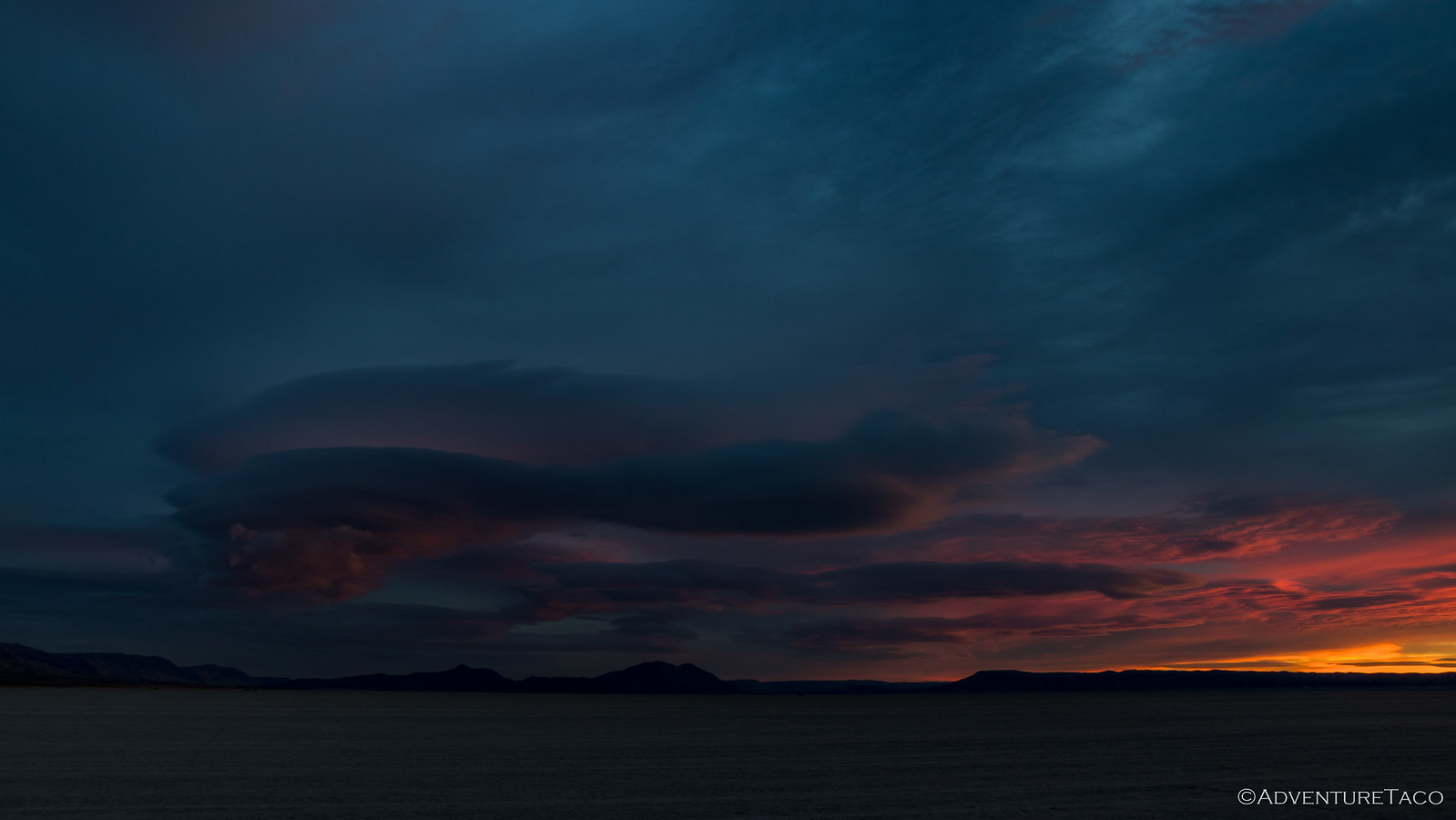 The Alvord Playa is one of the largest playa lakes in Oregon. Formed as rainwater fills a a large shallow depression in the landscape, a salty crust is left behind as the water evaporates. In the rain shadow of Steens Mountain - which rises over a mile above the playa floor - the Alvord Playa currently receives only 5-7 inches of rain a year. But it wasn't always so - 3.5 million to 15,000 years ago, the lake covered all of what is now the Alvord Desert. At the end of the ice age (13,000-14,000 years ago) the lake flooded, sending nearly 40,000 cubic yards of water spilling into the Owyhee River every second, dramatically and permanently lowering the water level.

With lower water levels, the salty crust that forms as water evaporates each year consists mainly of borax. This attracted miners in the late 1800's - Charles L. Taylor and John M. Fulton - who purchased 3,000 acres of land around the lake and started the Twenty Mule Team Borax Company.

Today the land is public (BLM) land, for which we were grateful - able to enjoy it in all it's glory. 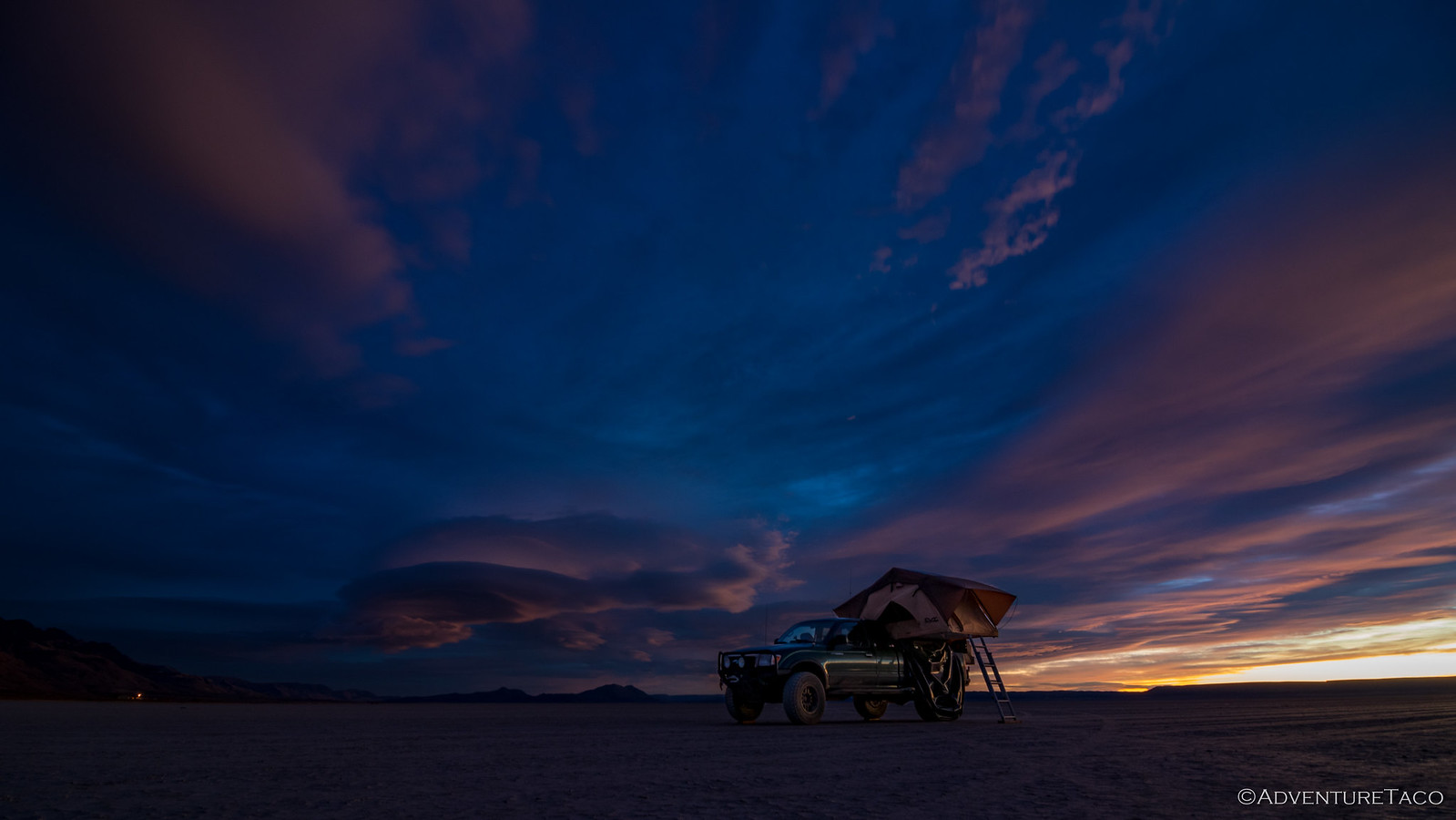 As the sun rose higher in the sky, Steens Mountain was illuminated behind the playa, an amazing backdrop for our simple cereal breakfast. 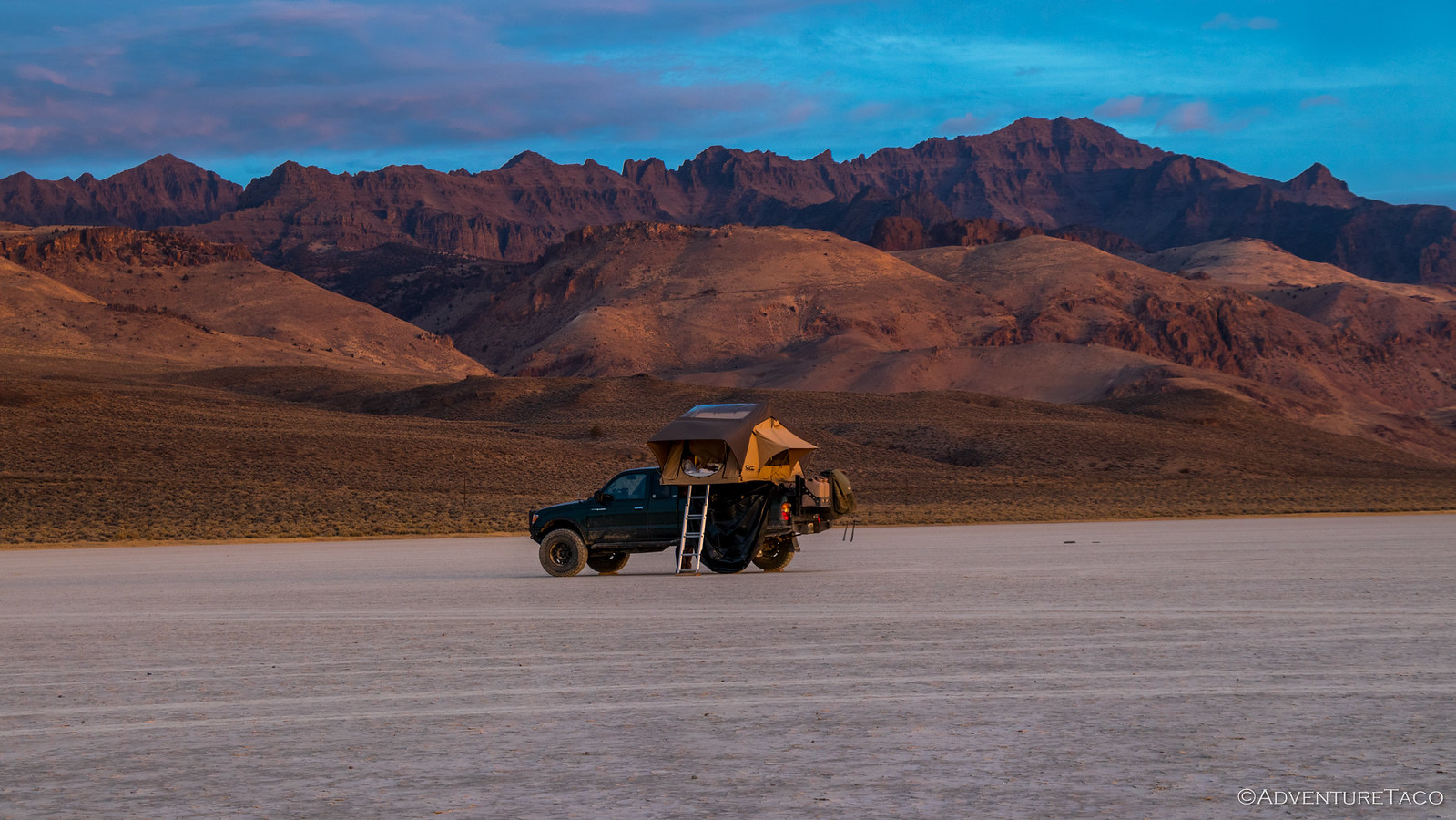 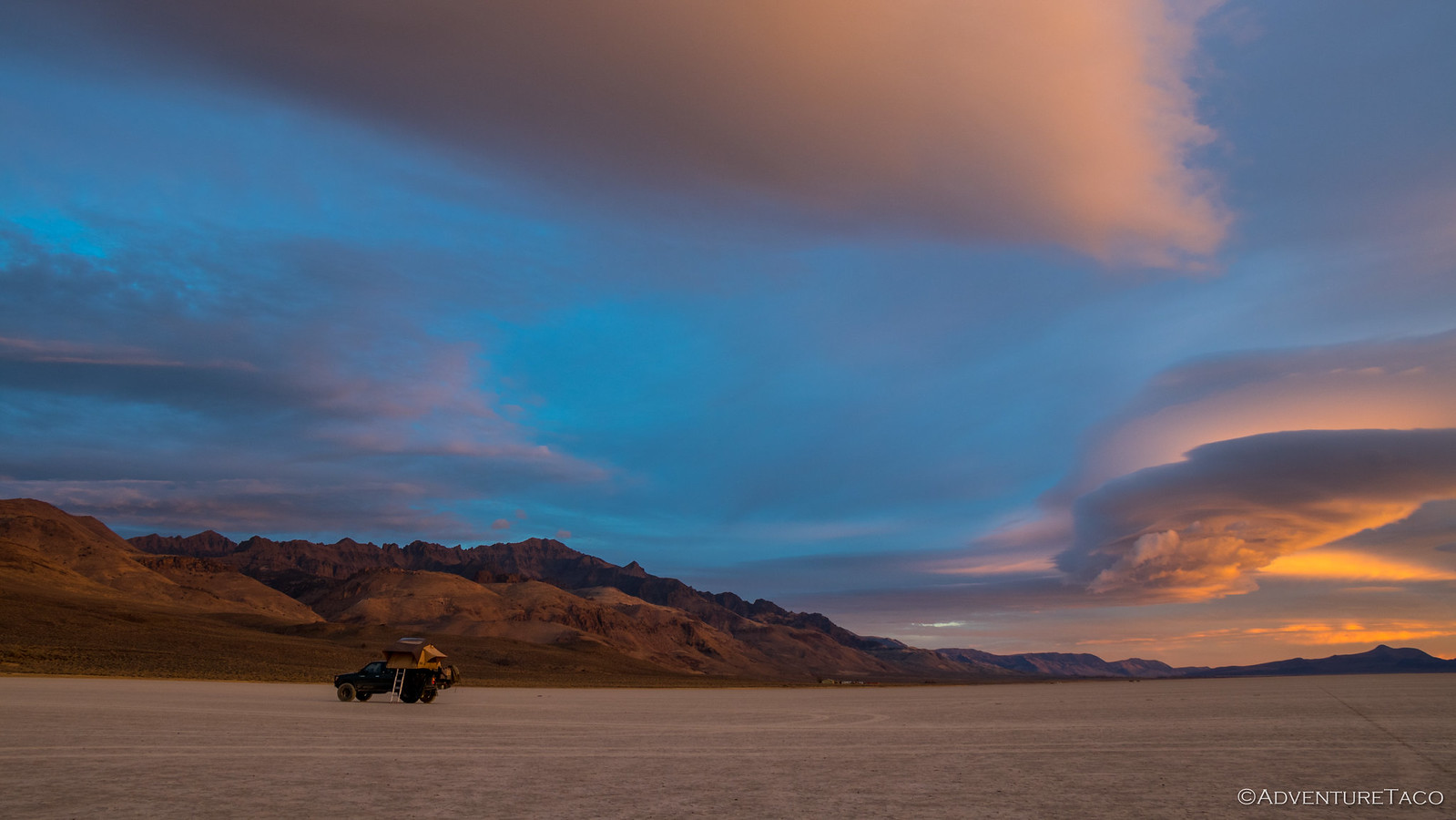 Having not had a chance to explore the evening before, we decided there was no better time to walk around a bit - the vast playa beckoning us onward. The problem, of course, is that one spot in the playa seemed just like another - the cracked surface so flat as to be disconcerting. 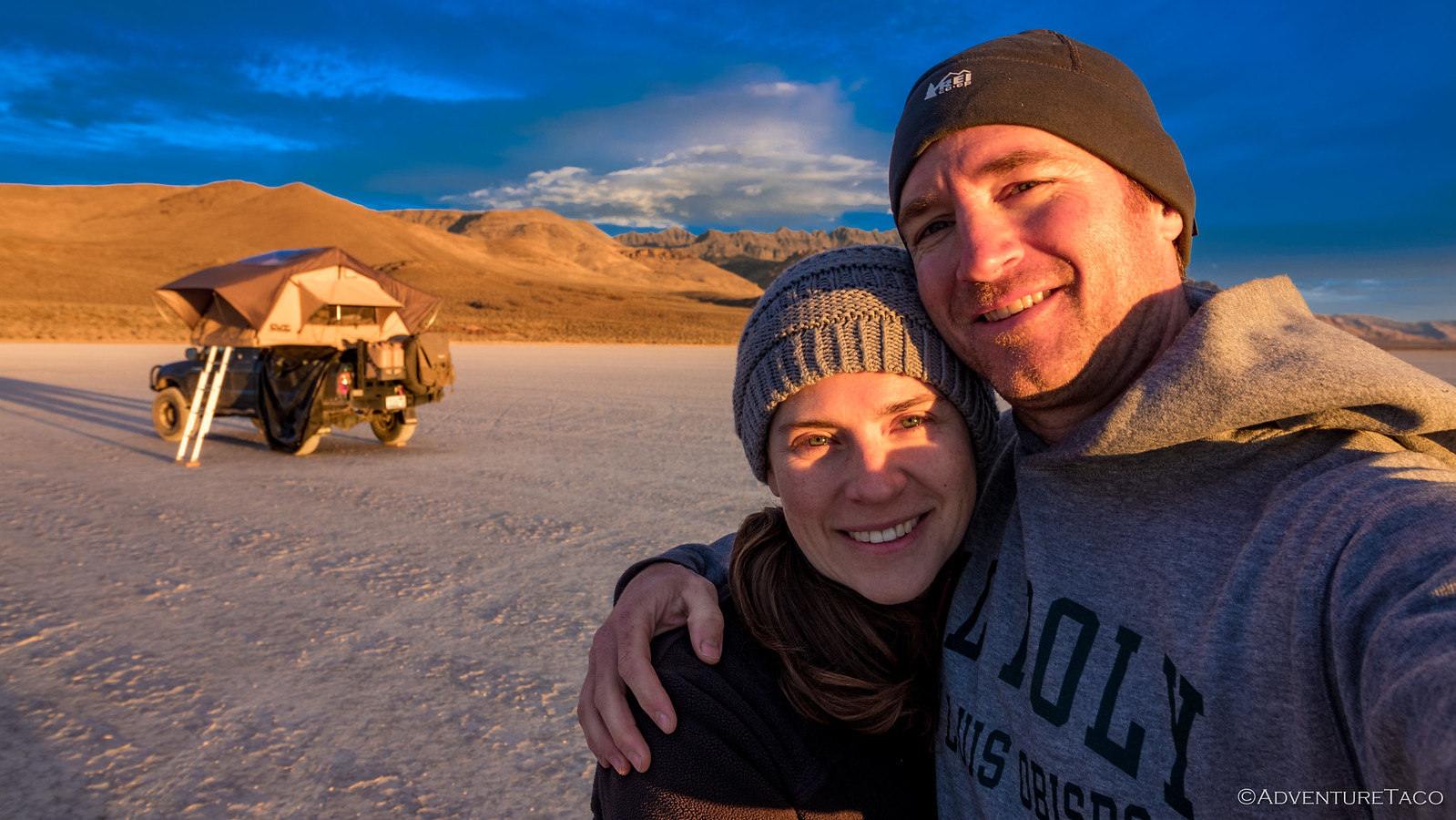 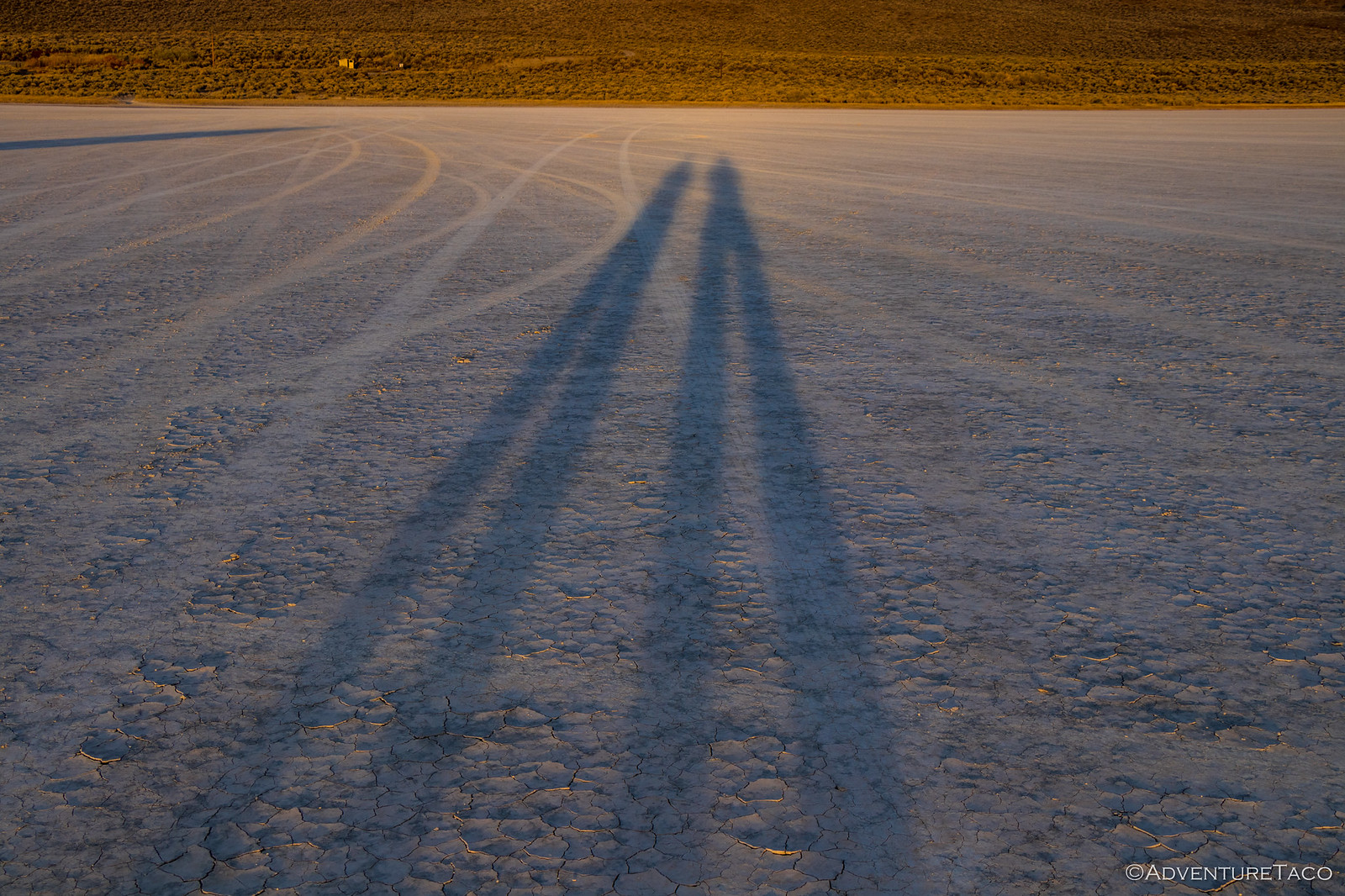 It wasn't long before we realized that the only real way to explore was going to be in the truck - without it, there was no way we could cover the necessary ground. So we cleaned, packed, and loaded up - quickly accelerating to 60mph as we sped across the lake bed. In fact, we weren't really speeding - the women's world land speed record was set here in 1976 by Kitty O'Neil - at 512mph!

As we zoomed around, @mrs.turbodb spotted something in the distance. We turned toward it and realized - it was a plane. A plane that had apparently had a bit of a rough landing. 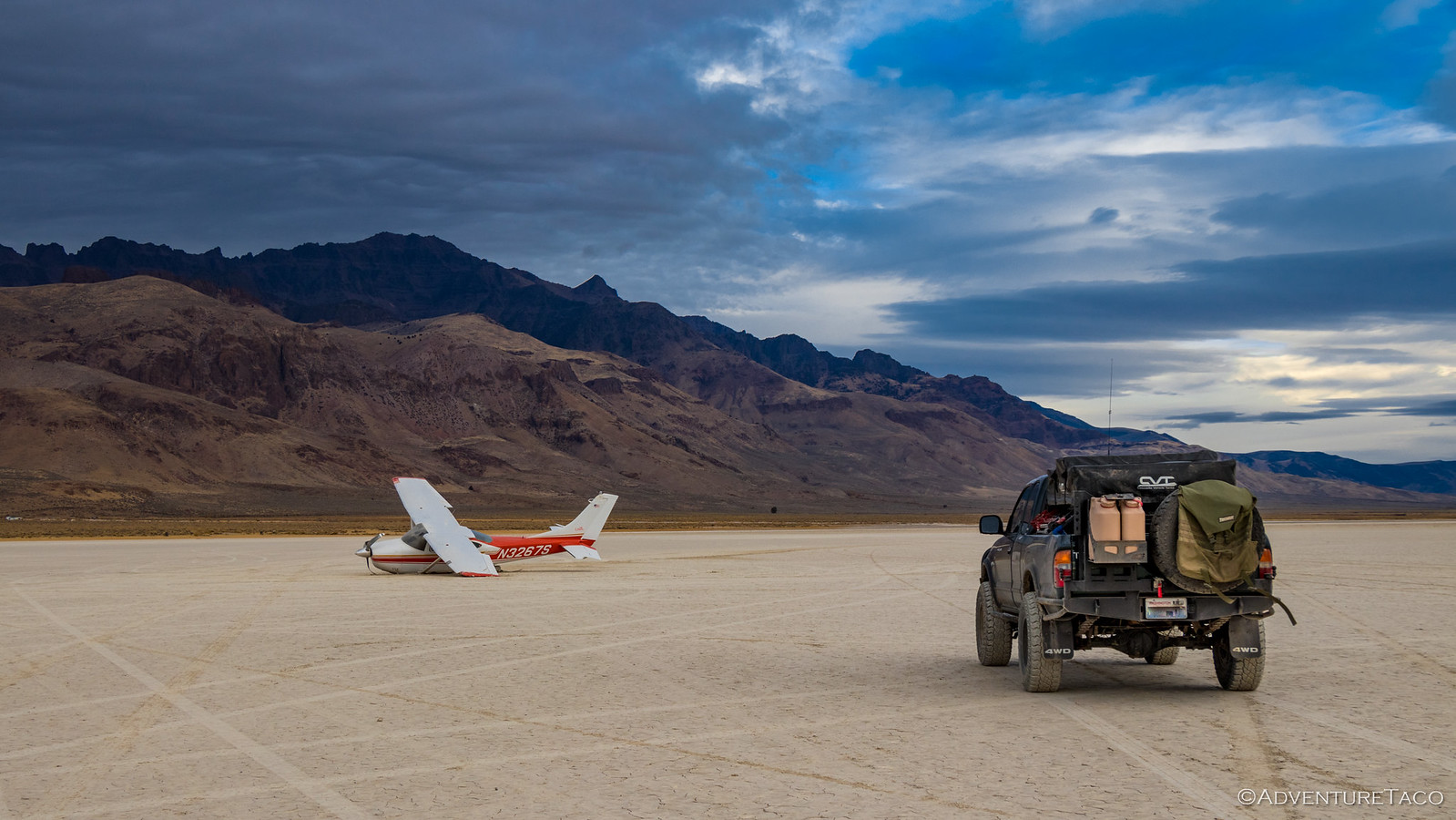 As we got closer, it was clear that the plane hadn't been there very long - a week or less, I'd say. Two of the wheels had been torn off as it skidded across the playa, it's propeller mangled from digging into the surface as it came to a stop. Luckily, it looked like the occupant(s) had probably escaped relatively unharmed - the cockpit in good shape.

Update: It hadn't been there long, according to the NTSB. 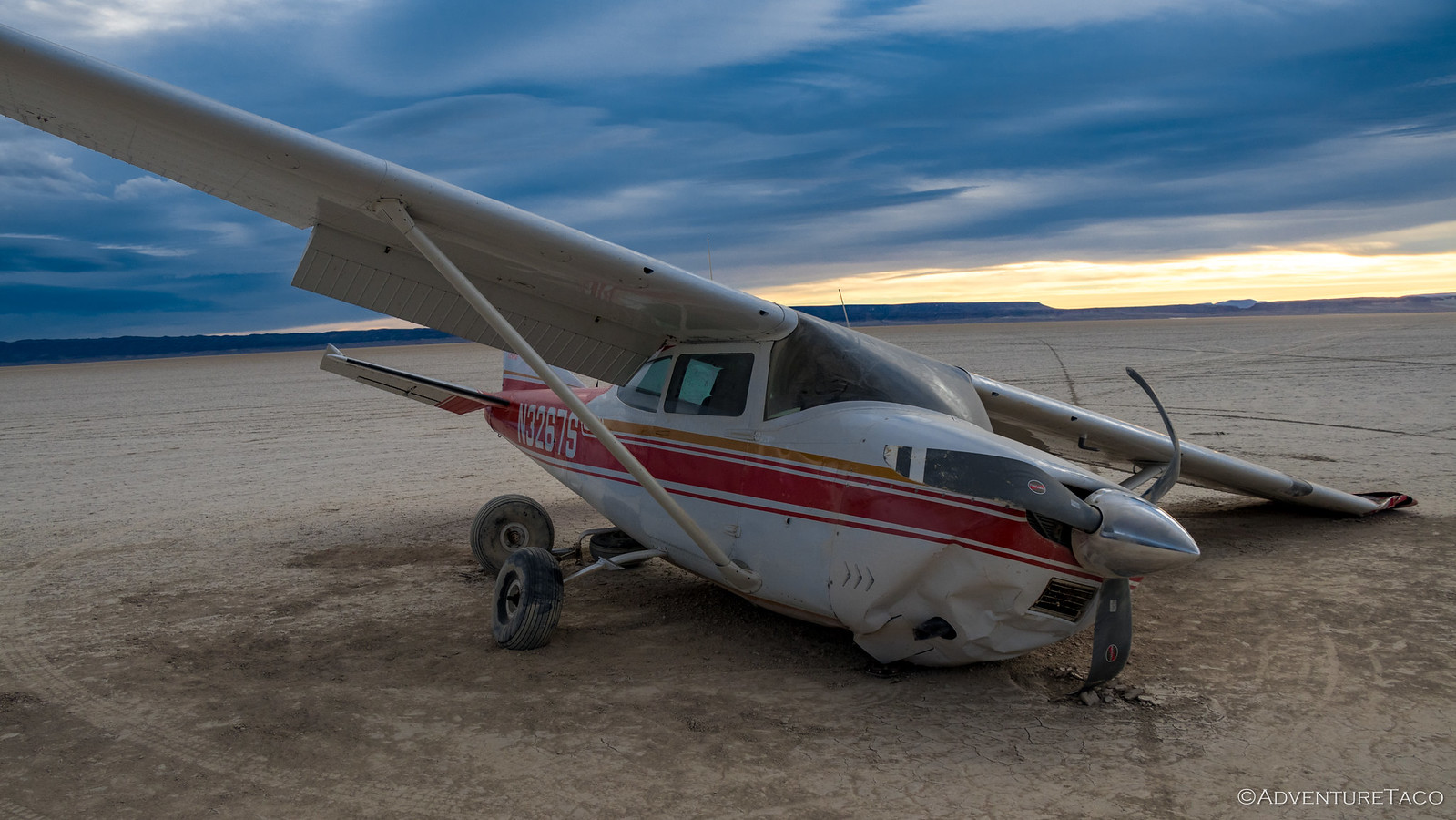 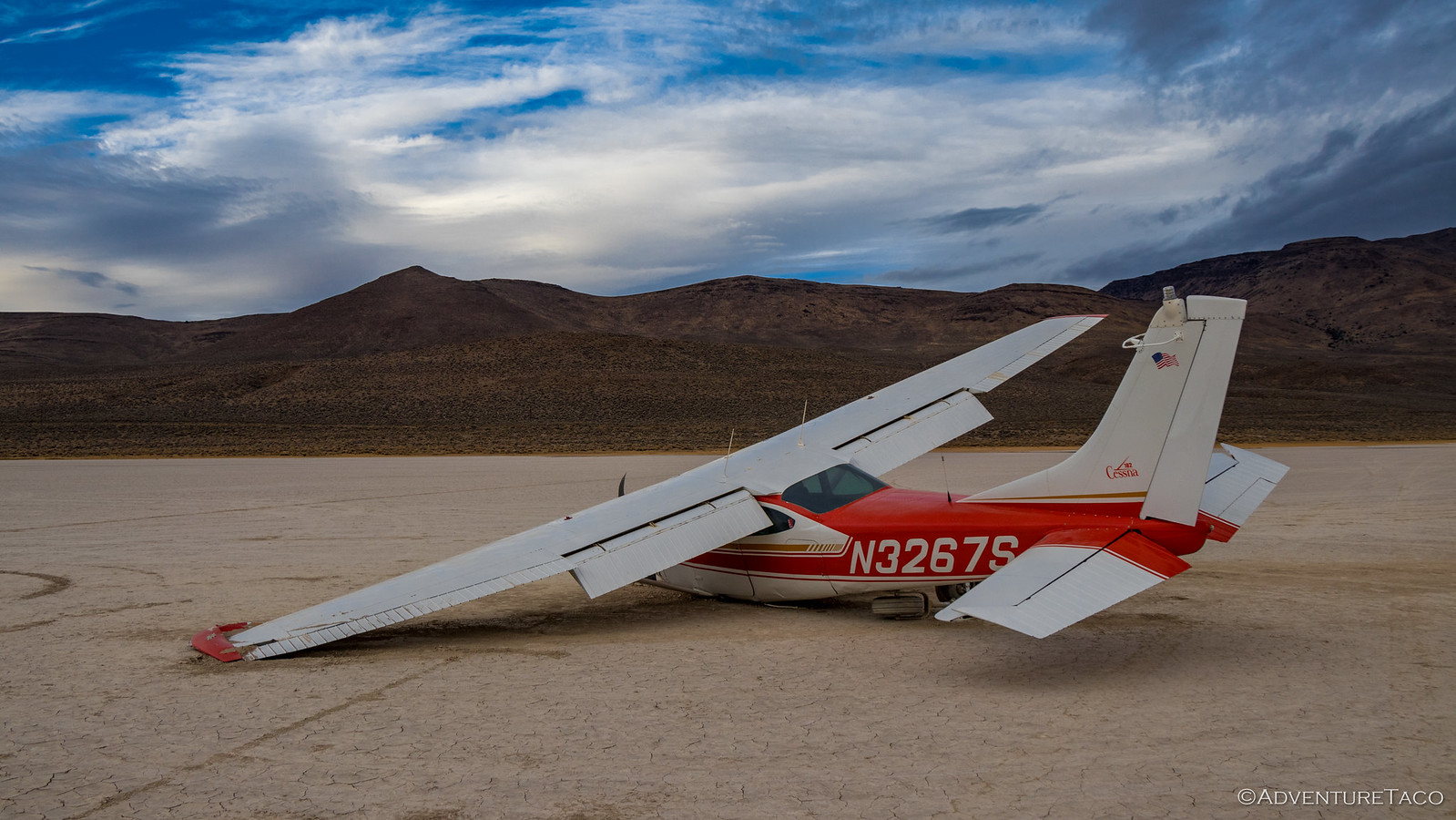 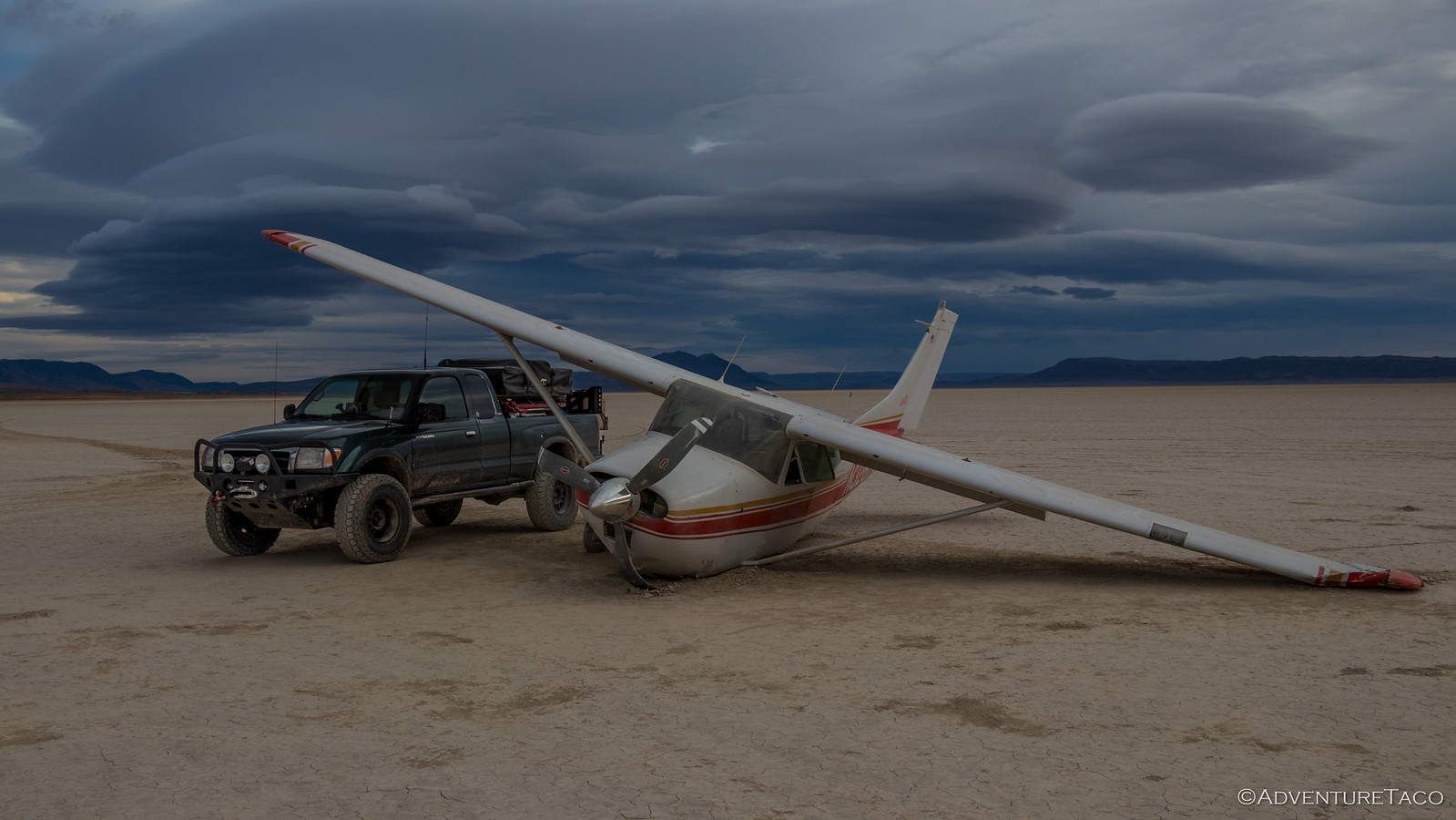 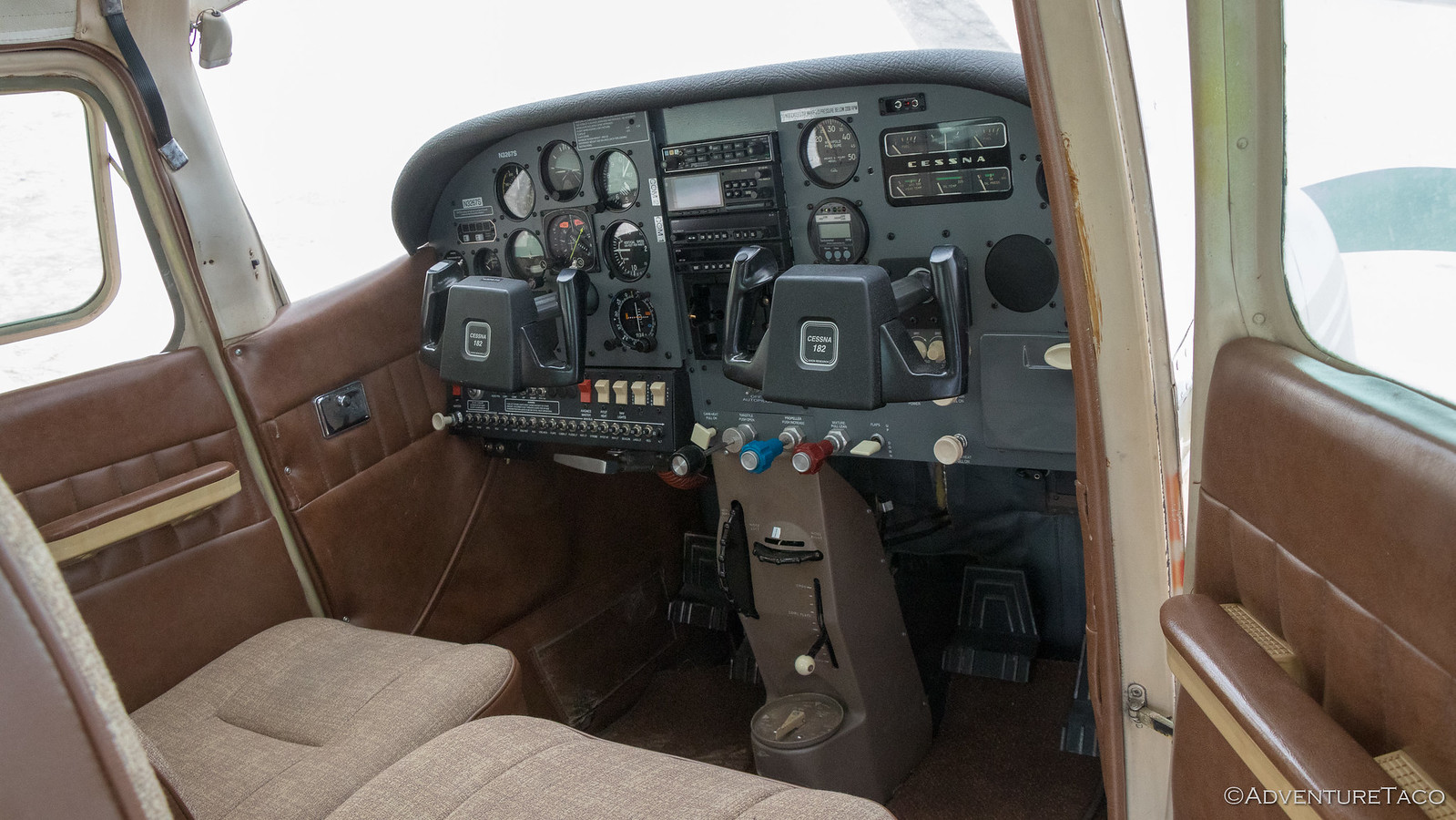 Having explored only a small sliver of the playa, we knew this was a place we'd need to return in the future when we had more time. A couple days on the playa, and some time driving to the top of Steens Mountain (the highest road in Oregon) would make for an awesome adventure.

But as it was, we had to get going - we were headed home today and had a good 10 hours or so if we drove straight through.

Which of course, we weren't planning on. In fact, our next stop was only ~15 miles away and to the east - Mickey Hot Springs. These springs are way too hot to take a dip in, the temperatures averaging 170ºF, but they were super cool to explore nonetheless. Spread out over an area the size of a couple football fields, they consisted of bubbling mud caldrons, boiling pools, and of course larger springs. 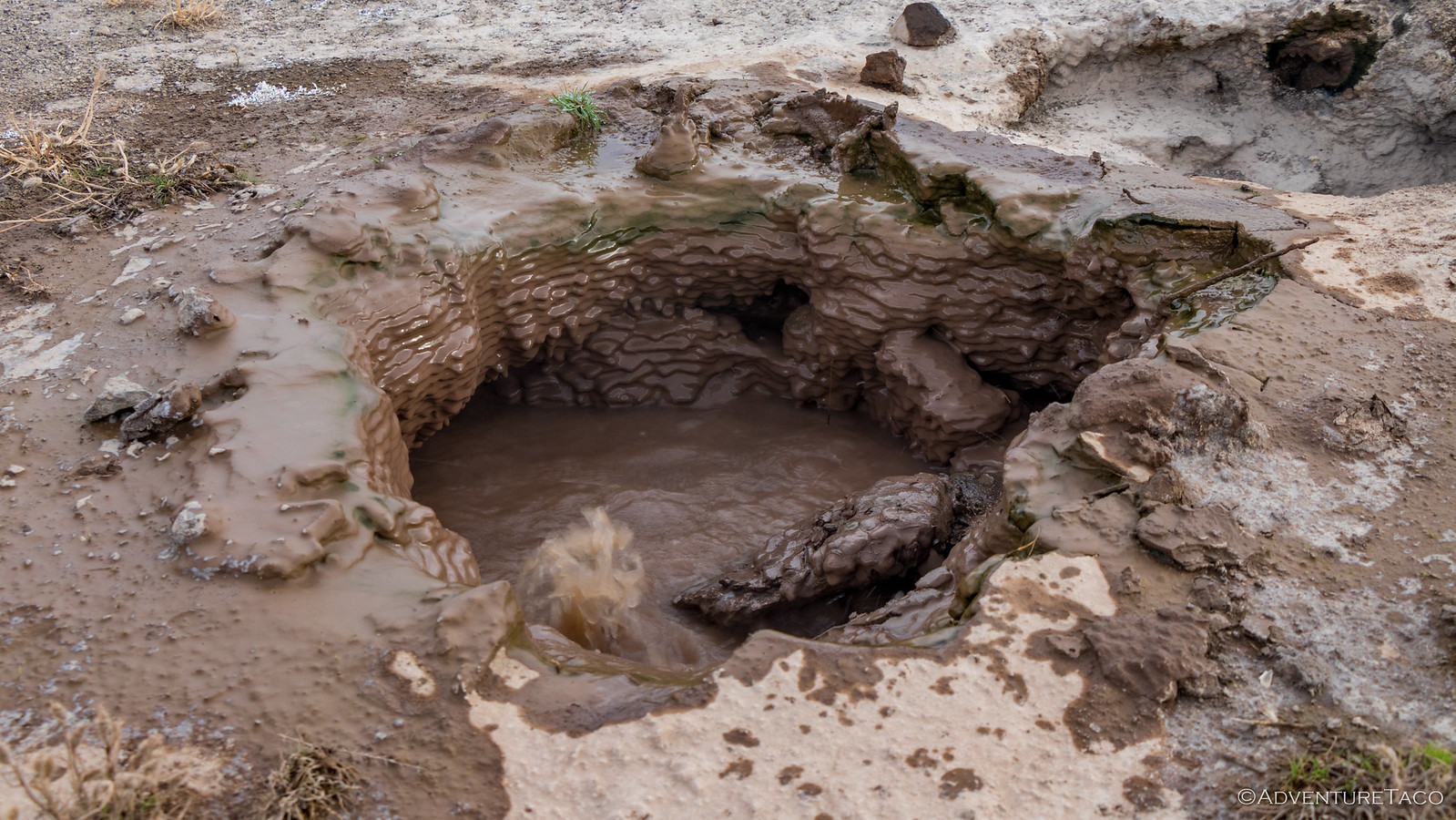 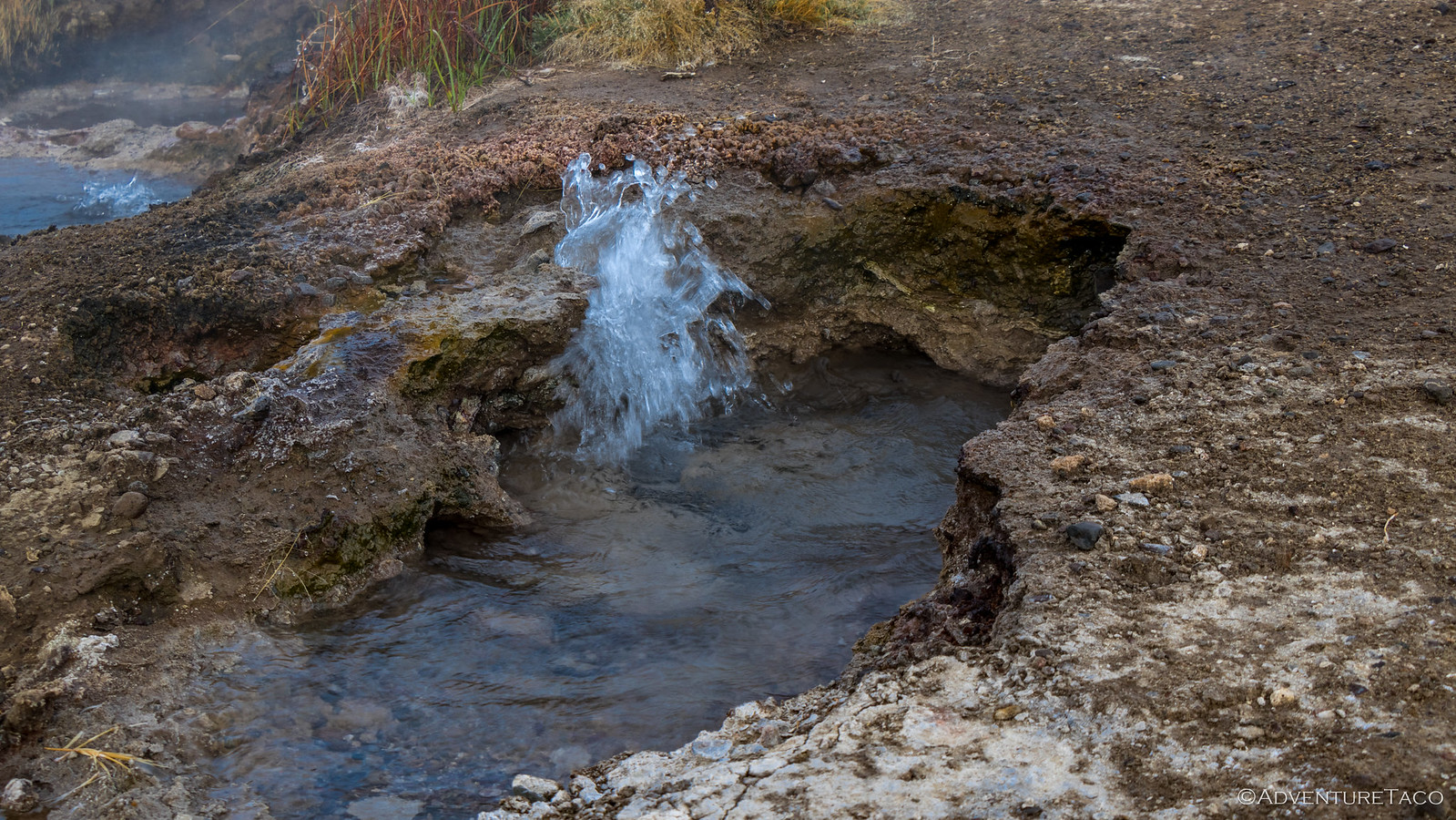 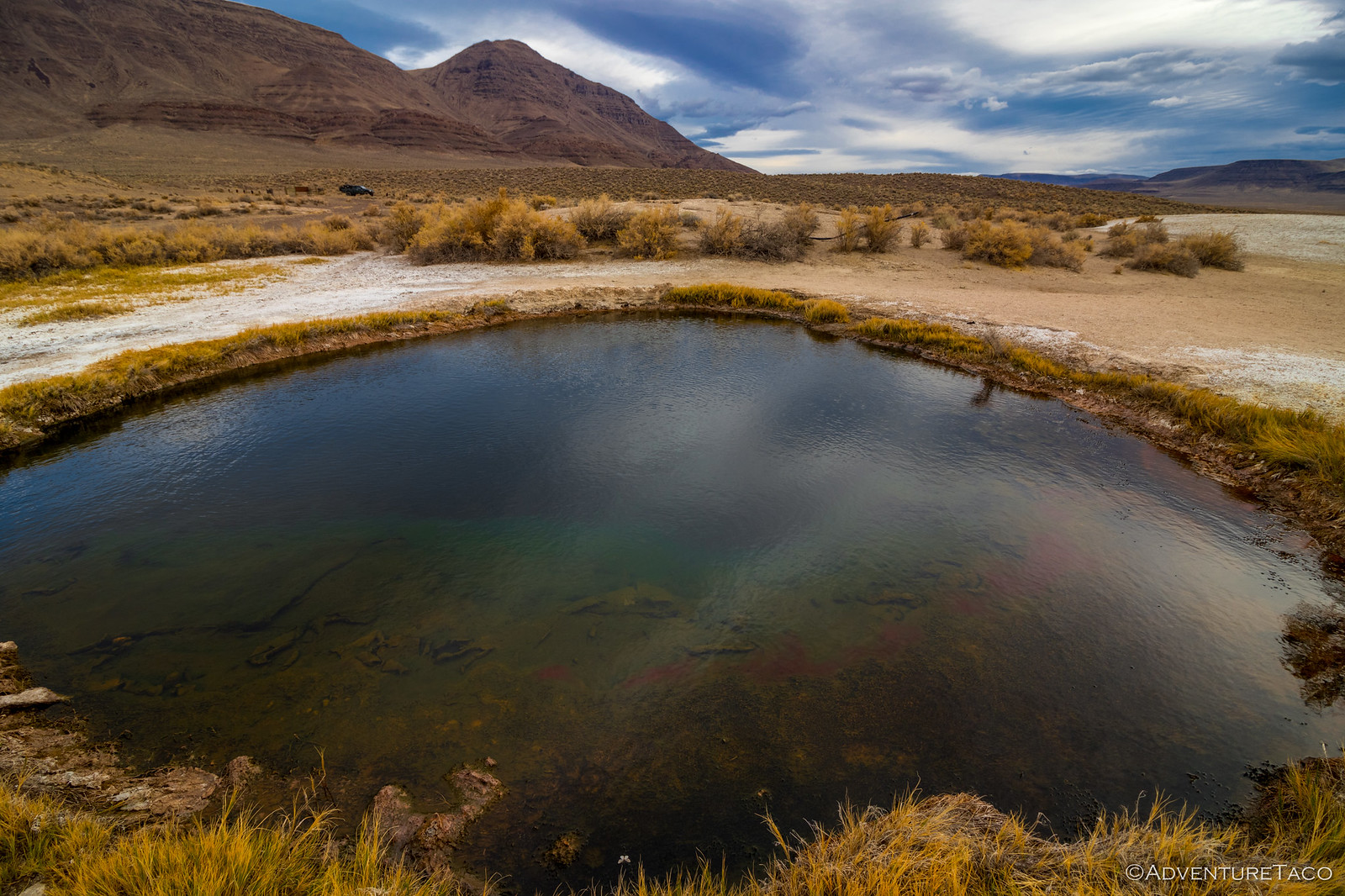 I found the larger springs the most interesting, as several of them were super-deep - more than 30 feet we'd later find out - with brightly colored algae growing in the hot water. It's times like this when I wish I had a polarizing filter for the camera. 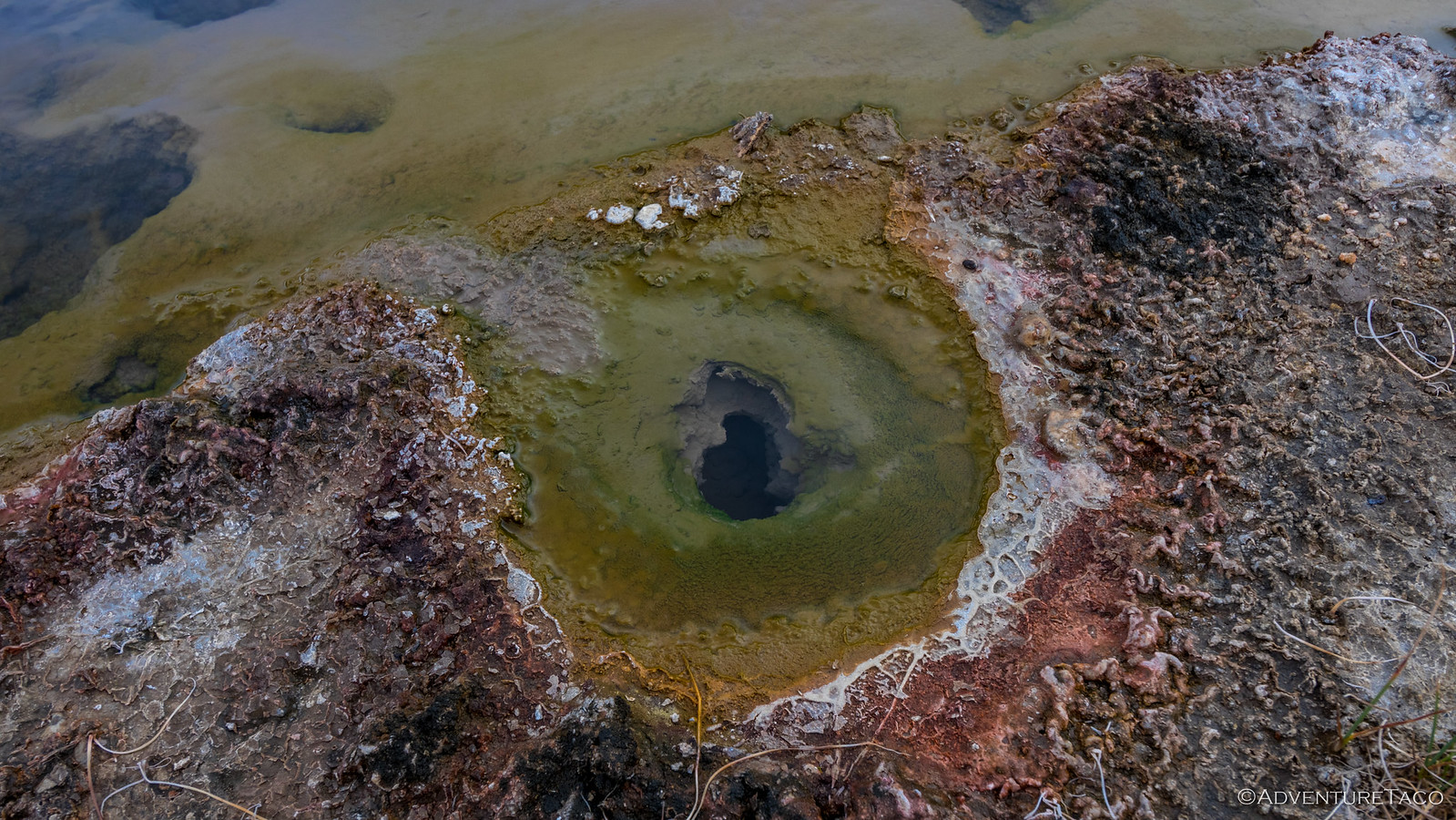 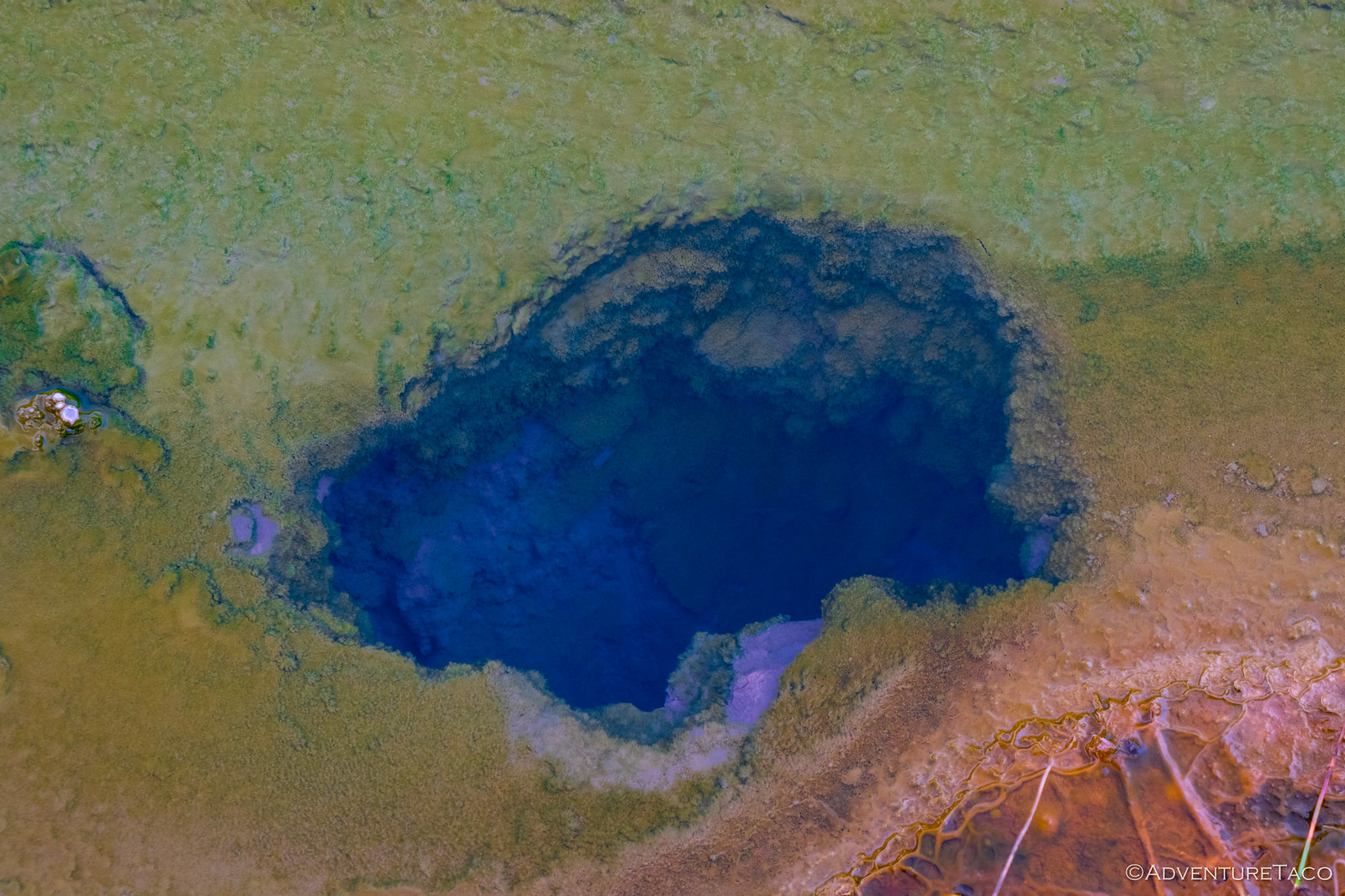 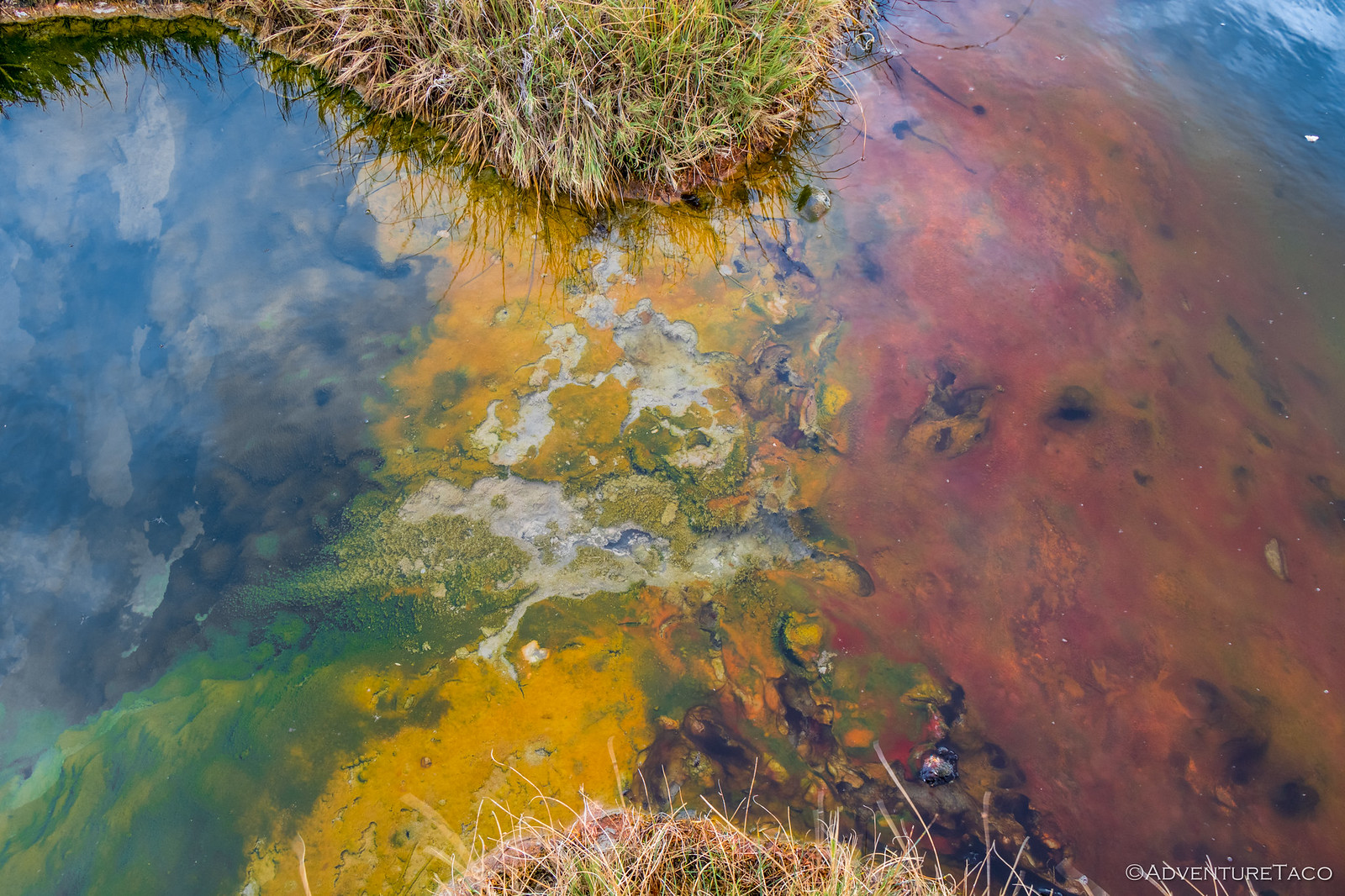 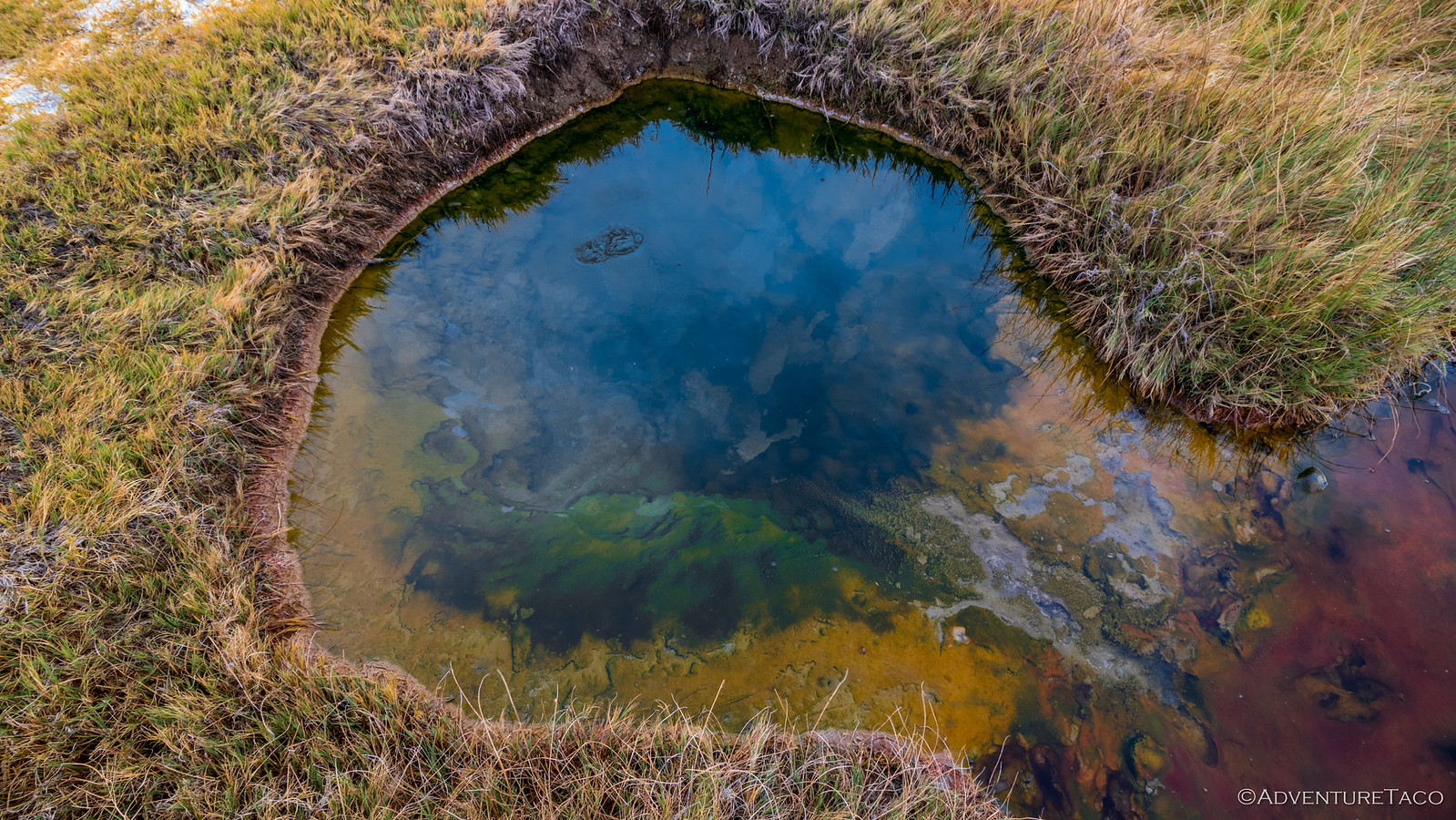 As we circled around the springs on our way back to the truck - the sound of pressurized steam vents and bubbling pools around us - we counted ourselves lucky. This was a place we'd not planned to visit, and yet it'd been quite the discovery. It's definitely a place that we'll want to visit again, as it's clearly an active site - some of the pools starting to fill in; others already dry - and so will likely be a whole new experience on each visit. 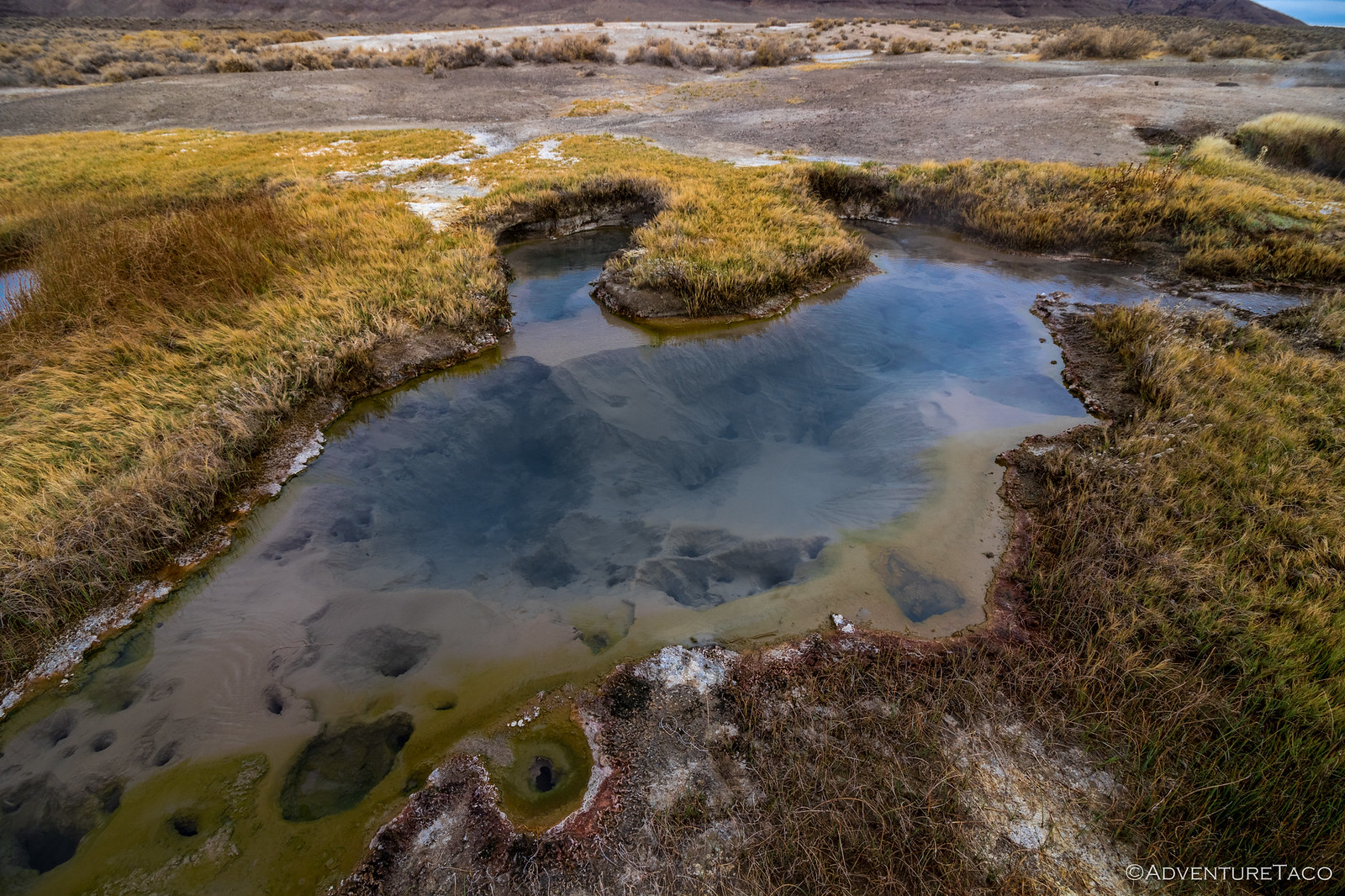 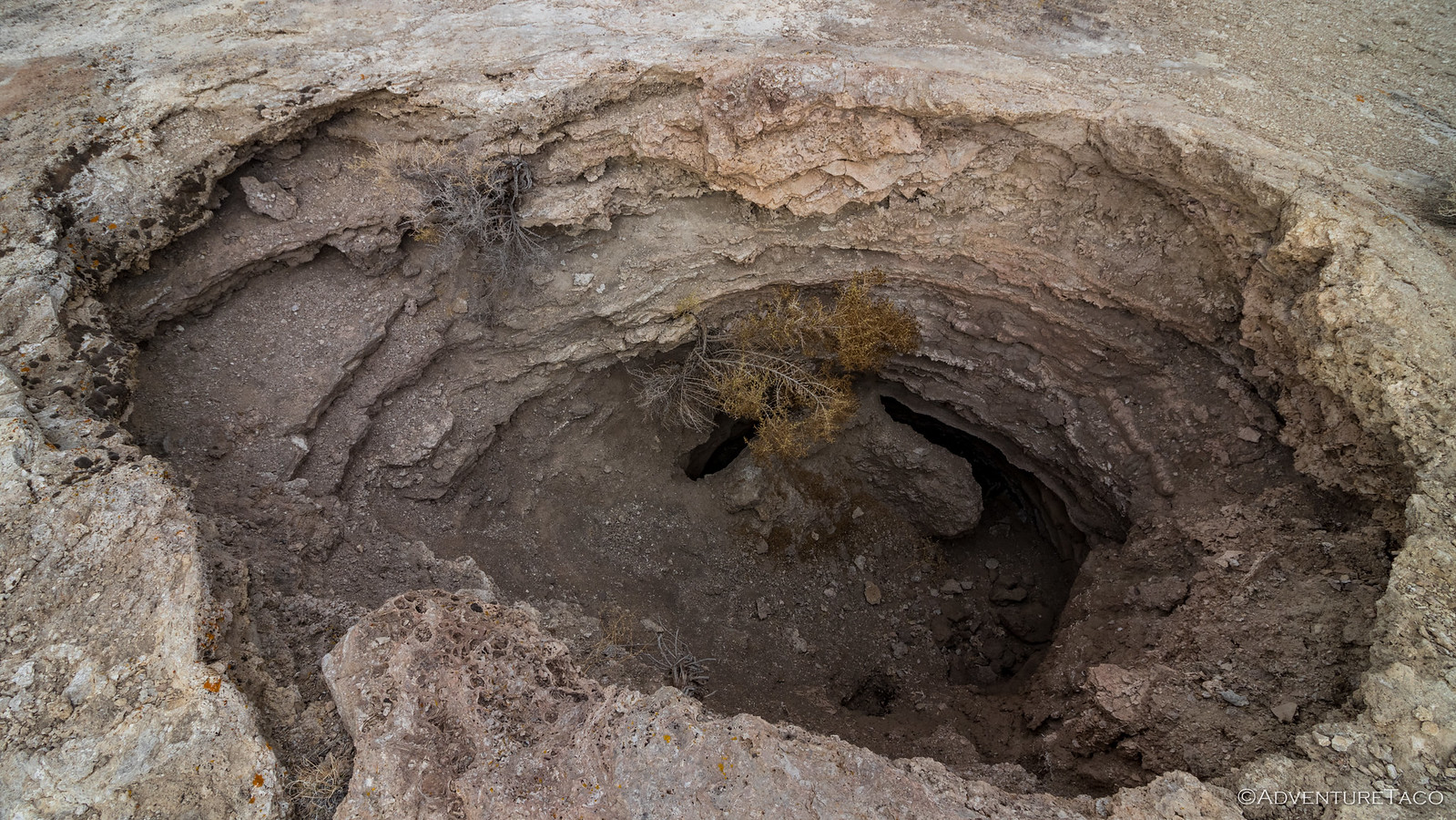 Just as we were leaving, we noticed this guy - a killdeer I think - scurrying around the borax crust of a large pool that had been long dry. It appeared to be guarding a nest, but we took a careful look around and didn't see any eggs or an obvious nesting area, so it could have been that it was distracting us from the real prize! 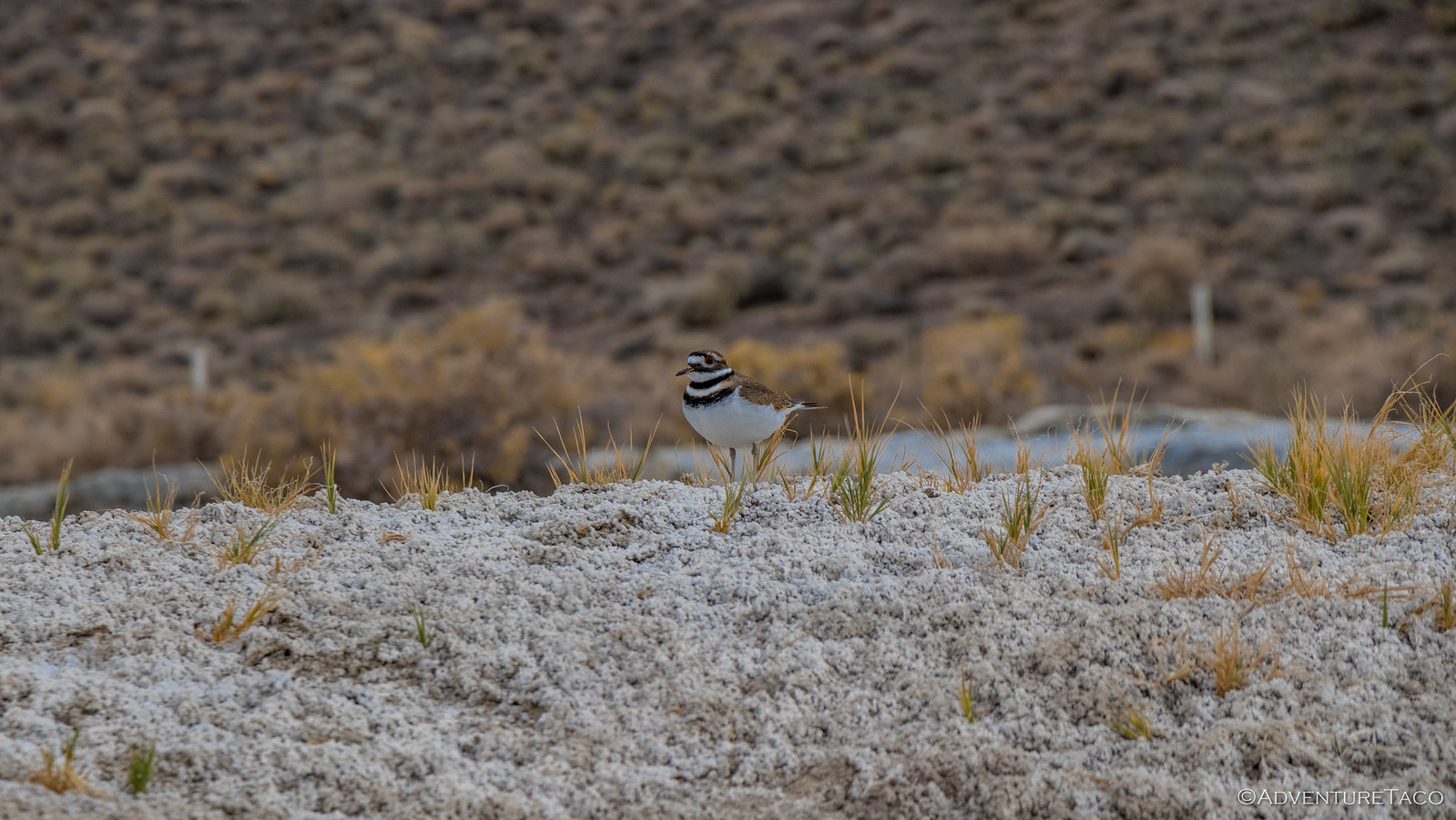 Back a the truck, it was time to head home and we had a decision to make. We could head back the way we came - the main route - and to the amazingly-well-graded gravel road which we'd traveled the day before, or we could continue north along the road we were currently on - meeting up with the well-graded road some 30 miles ahead.

We weren't sure the condition of the route we hadn't traveled, but we were keen for adventure and so we set out on the path yet-unexplored. And I should mention - we were still fully aired up, having expected to be on the well-graded road when we left the playa.

So it was that we bumped along - the road reasonable for 20 minutes or so. Then, in the distance we noticed what we thought was someone else is approaching from - or just just driving around and stirring dust up on - another large playa. 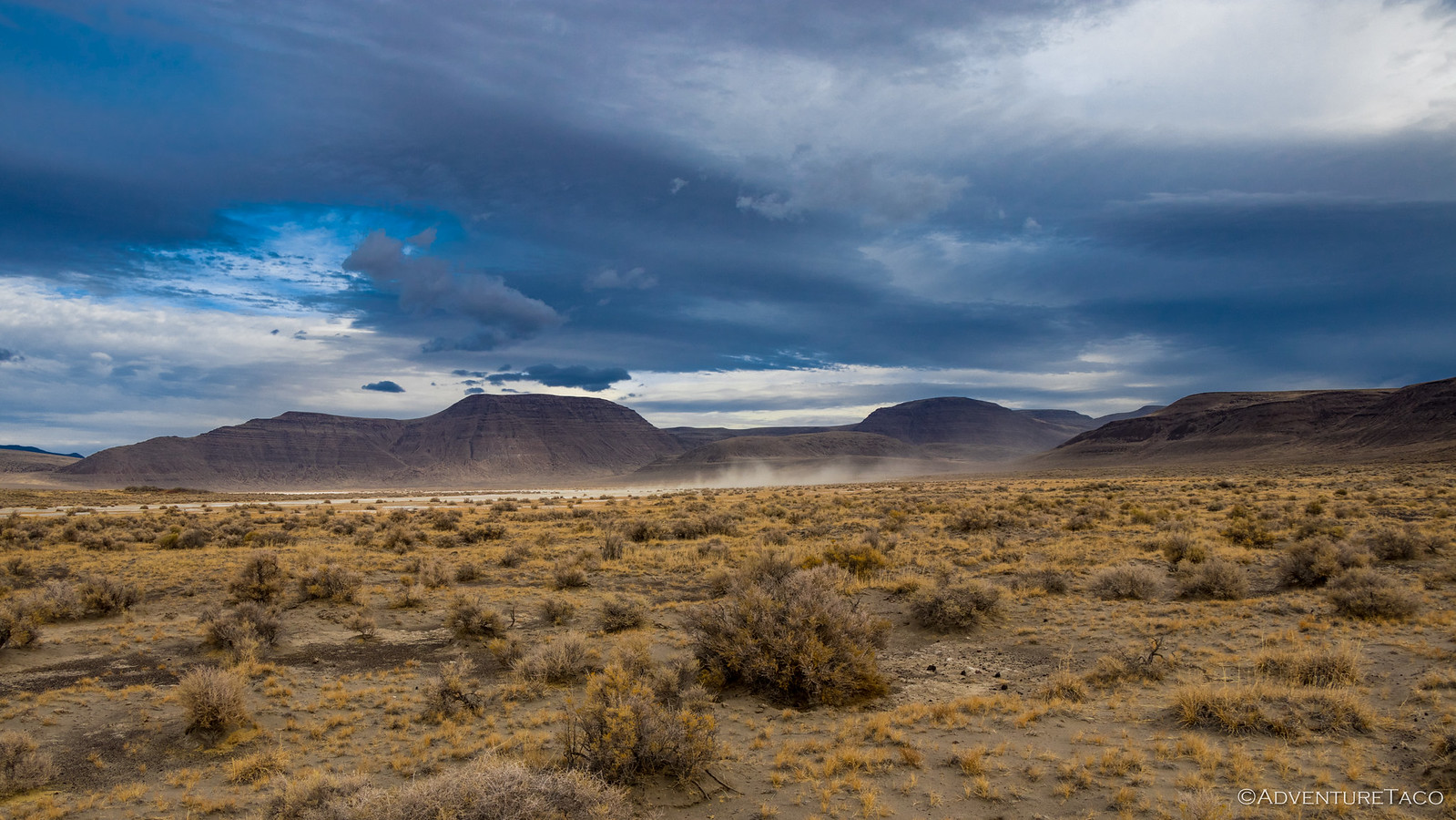 However, as we got closer we realized it wasn't another vehicle at all. In fact, it was steam from the enormous Crippled Horse Spring in the middle of of the Mickey Basin. Unfortunately, we didn't have time to explore - Crippled Horse Spring would be another bullet on our "next time" list - for now, we needed to keep heading home.

We continued on, the road getting fainter and bumpier the further we went. Obviously not well traveled, any traffic on it was likely cattlemen on ATVs - the tracks narrow. 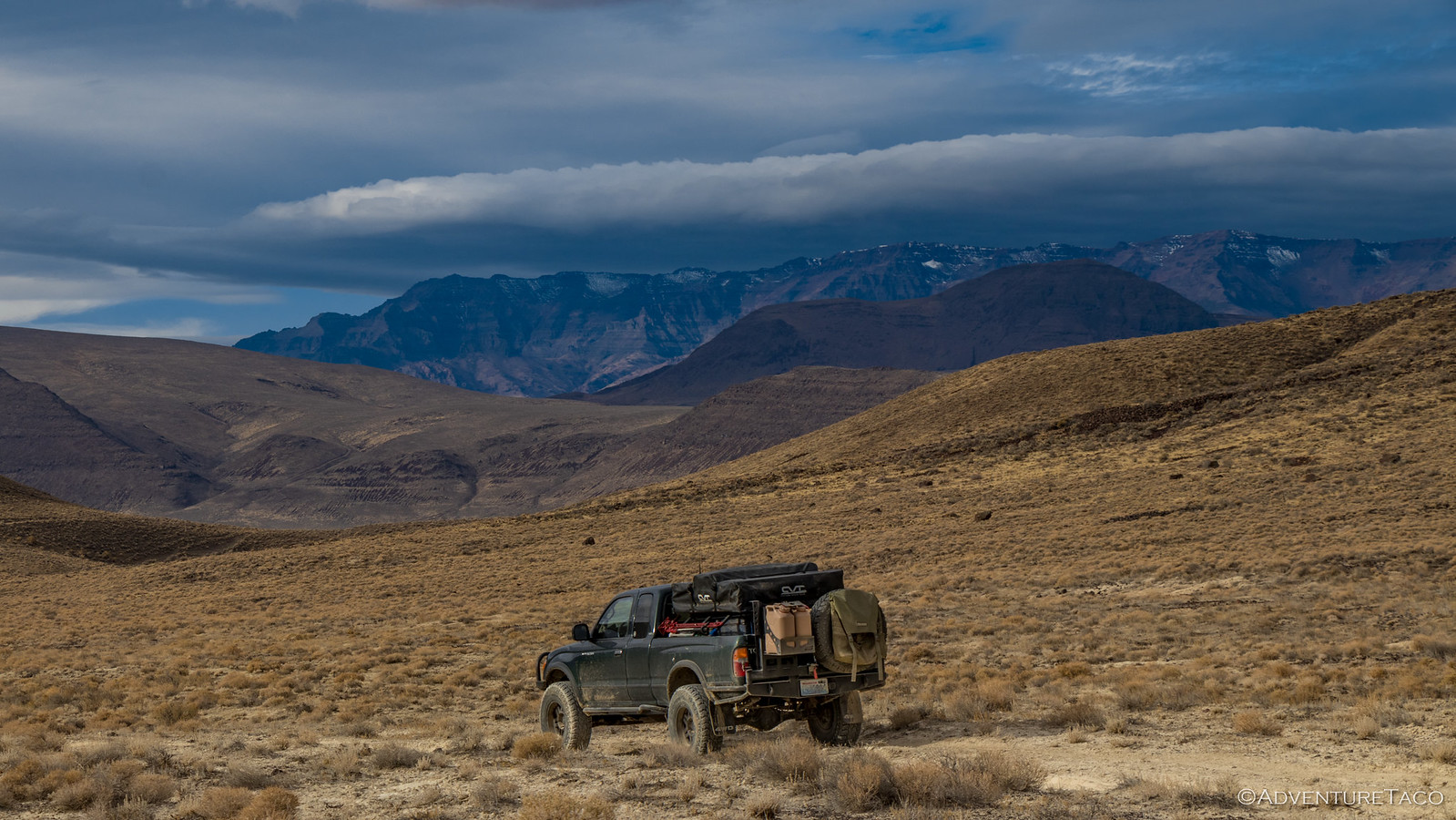 And then, not yet a third of the way back to the main road, it petered out in the middle of a valley, just before what looked like a rocky pass. Could we have aired down and followed the GPS track I'd created at Mickey Hot Springs to the main road? Probably. Would it have taken us hours and meant an extra-late arrival home? Most definitely.

And so it was that we decided to head back the way we came - back to Mickey Basin and ultimately to the main road. We'd added an extra 45 minutes to our drive by that point, but I think we'd both say it was totally worth it - the discovery of Crippled Horse and the anticipation of following the faint road next time, great memories of our adventure. 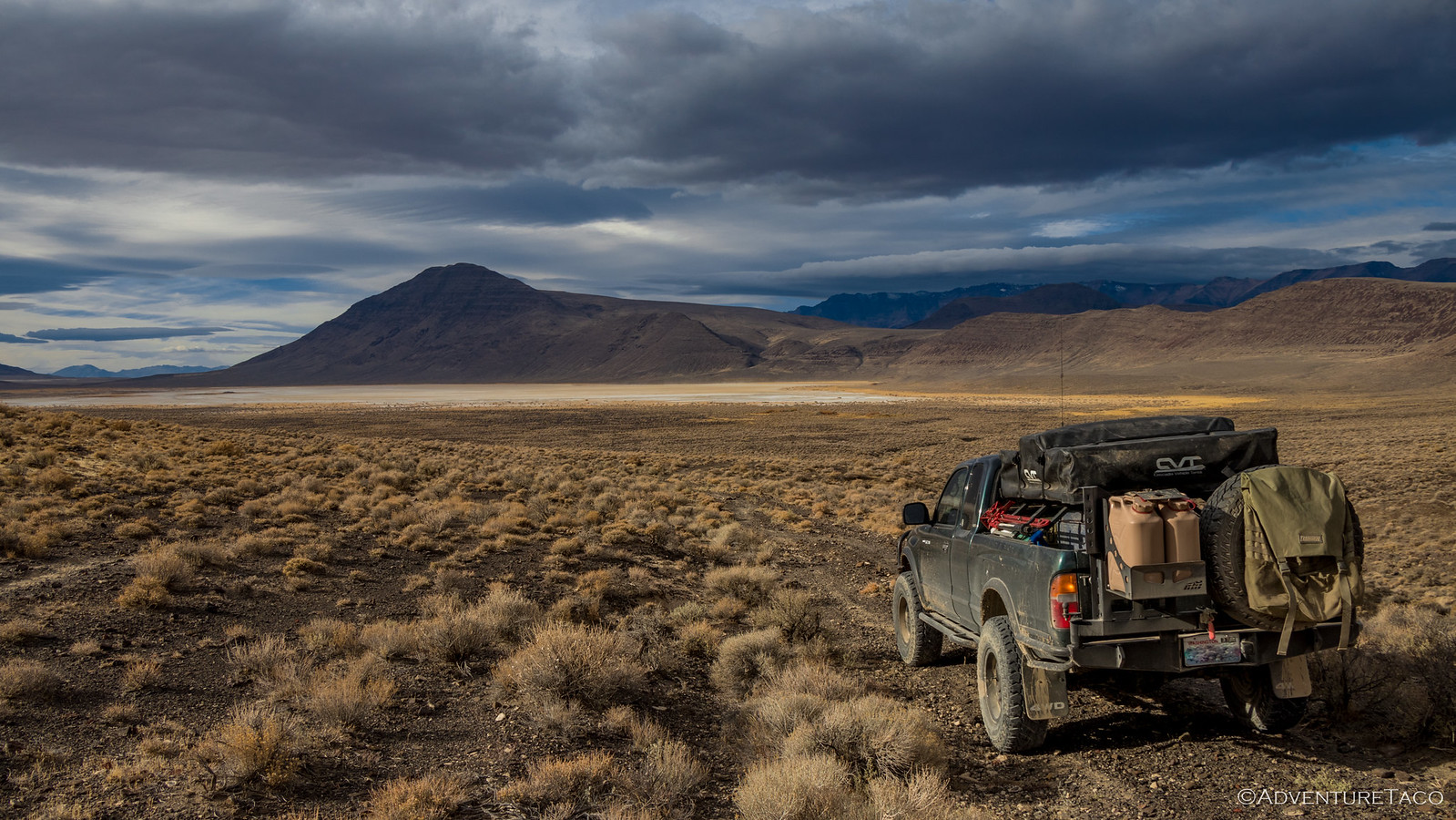 From there we pointed the truck north and did something I've never done before - we based our route on a combination of distance and wind direction. See, it seems that we're always driving into a headwind - and that's a killer for the MPG's on the truck - easily cutting mileage from 17-18mpg to 13-14mpg. 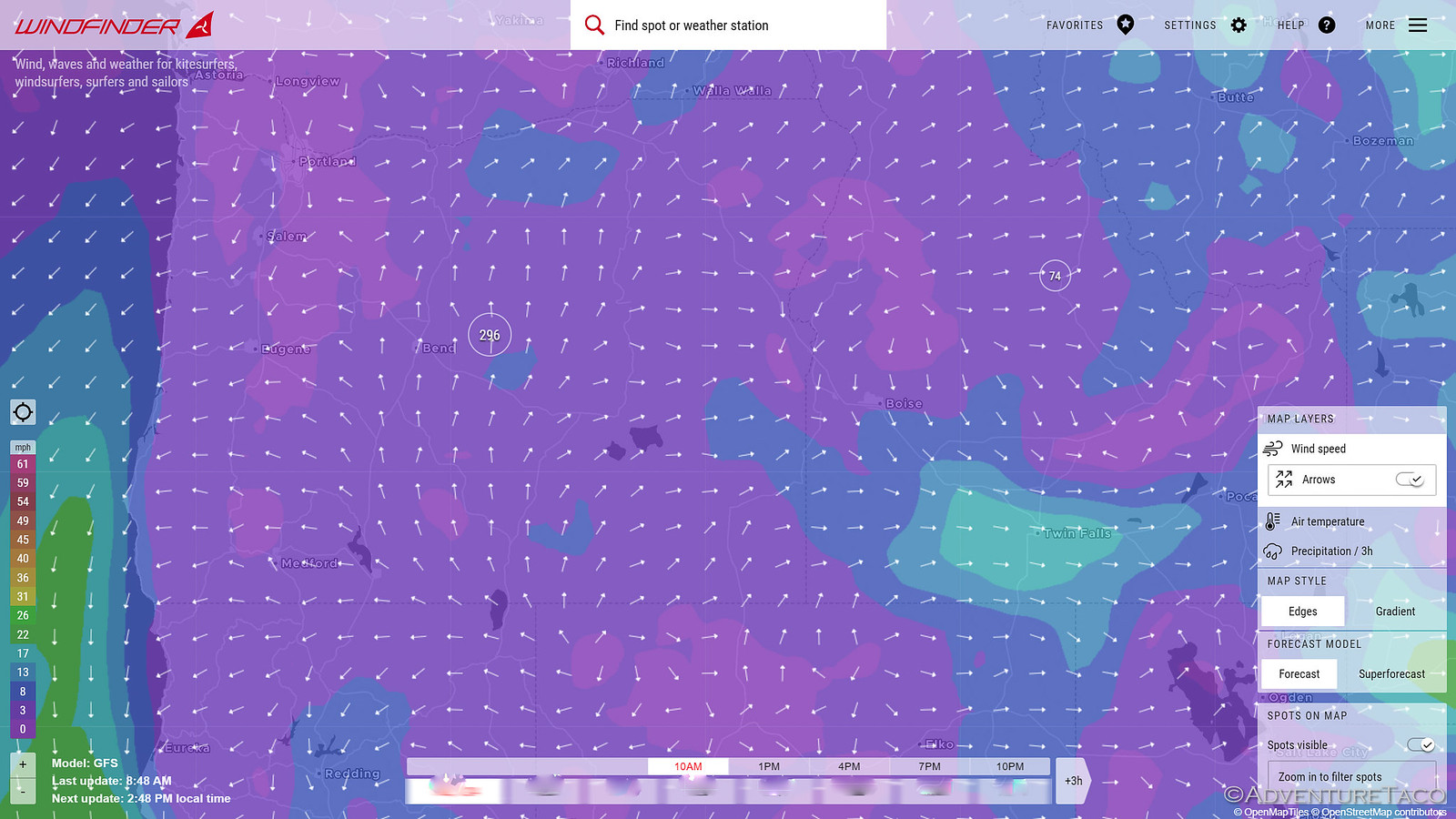 With the help of Windfinder (which I unfortunately didn't screenshot at the time so the above shot is just a sample), we were able to scope out a route that was a mere 8 minutes longer time-wise, but would mean we'd have a tail-to-side wind up through most of Oregon, and also as we headed west in Washington. That, in contrast to a constant headwind if we took the "technically shortest" route west to the I-5 corridor and then north.Win win!

With our tailwind and a bit of luck, we got home a little after 9:00pm, now more excited than we'd been just a few days before to return again to explore more of the Owyhee and Alvord areas of southeast Oregon. 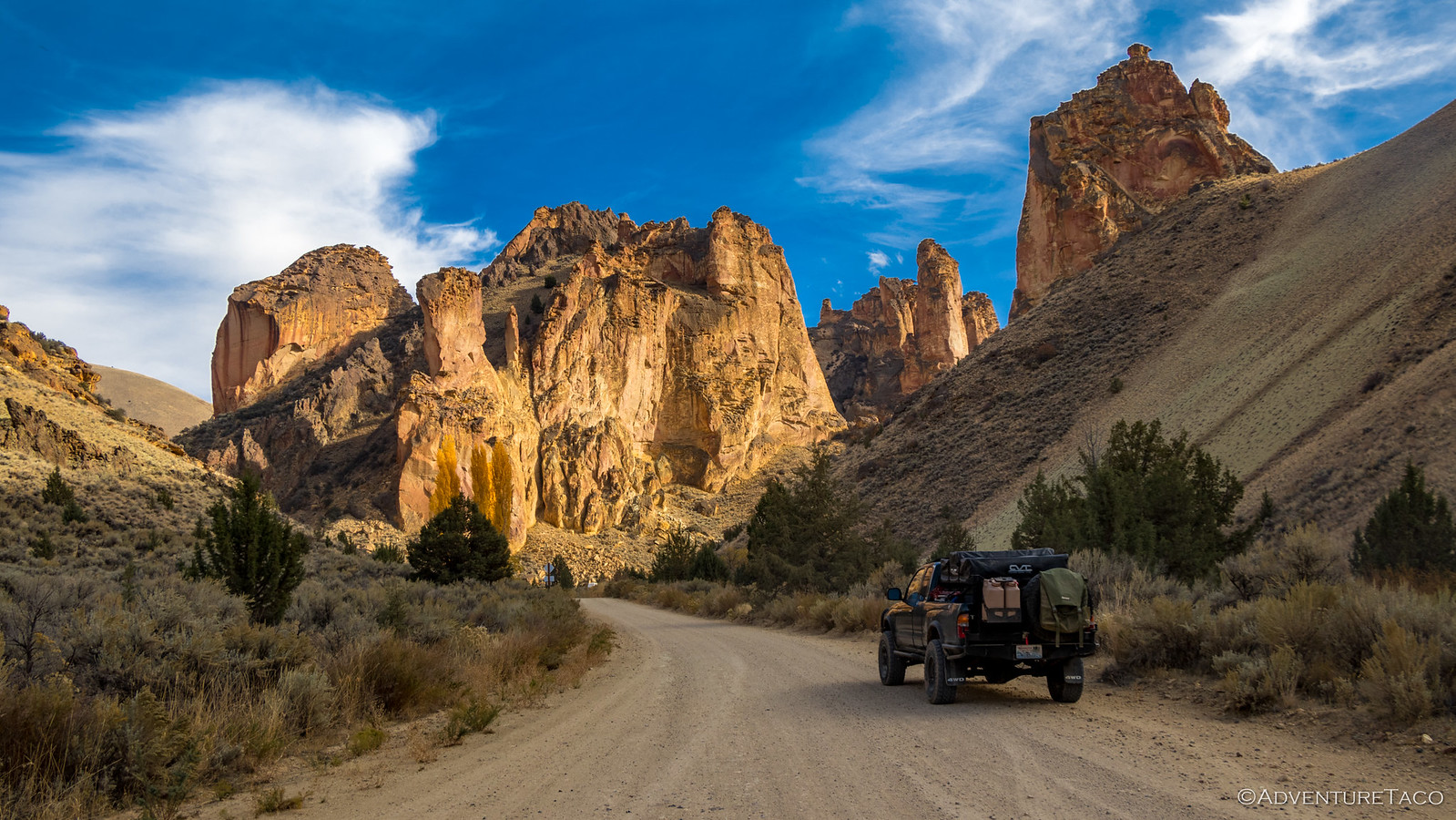