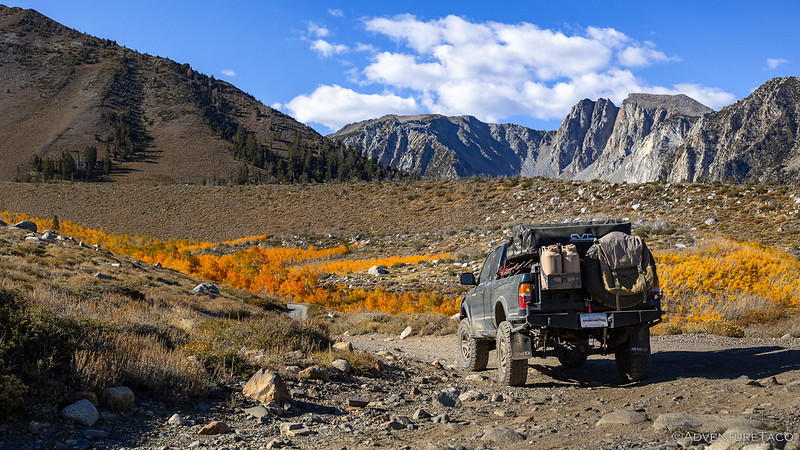 Part of the Lake Hopping the Eastern Sierra (Oct 2022) trip. 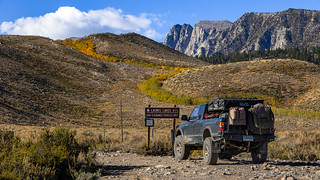 We arrived at the Laurel Lakes trailhead just after 9:15am on a Sunday morning.

Aware that this was a reasonably well-known destination, we were a little worried that the trail - and lakes themselves - would be crowded. On the flip side, I knew that portions of it were considered rough, and the trail had been - at least temporarily - closed for a washout several months earlier, so we could always hope.

Unsure if it was good or bad, there were two SUVs parked at the bottom of the trail, and a single F150 parked about half a mile up the rocky incline. Looking back now, the answer was obvious - this was a good thing, because it meant those vehicles weren't trying to pick their way amongst the rocks! Anyway, after a quick photo, I threw the truck into 4Lo and headed up the road. 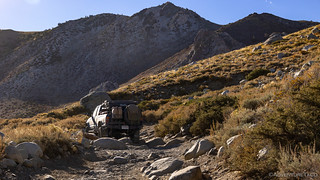 The first mile or so of trail is a pretty good incline with plenty of large-ish boulders strewn about. There's nothing here that was difficult or overly technical for a reasonably built truck with an experienced driver, but - of course - it did make for relatively slow going, given my desire not to break anything by throttling through it. 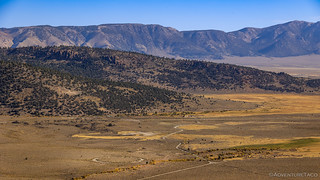 As we climbed, we noticed this perfect circle in the adjacent field.

Before long we'd reached the top of the first climb, the road leveling out a bit as it began to work its way up a wide canyon, not unlike the one we'd hiked the day before. And, as we'd experienced there, fall was in full swing, groves of aspen meandering amongst the folds of the landscape, their fluttering coats glowing brightly under a sky filled with fluffy white clouds. 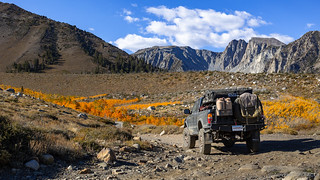 As we reached the end of the first climb, we got our first glimpse of the granite giants in the distance. 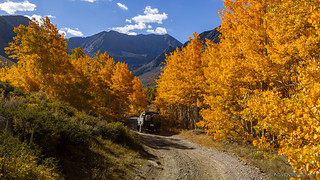 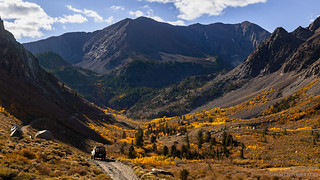 Just as we were starting up a reasonably long shelf road that skirted the northern flank of the southern side of the canyon, we spotted a 5th gen 4Runner in the distance. It would turn out to be - thankfully - the only other person we'd see "on the trail," and at a wide spot in the road our two vehicles easily passed - each of us waving and wishing the other a good day. Turns out that Rick had spent the night at the lake - lucky dude! - and would later reach out as he recognized the plate cover in his rearview mirror. Small world!

Anyway, after shooting up the valley for a little way, the road zig-zagged through a few easy switchbacks and soon we were cresting the final ridge that would drop down in the bowl containing the lakes we were looking for. 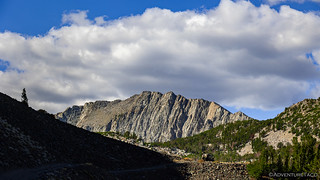 Out of the shadows. 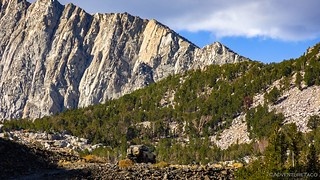 To this point, the views had been great, but they'd mostly been territorial, when they weren't, we'd been driving almost directly into the sun. But here - at the high point in the trail - all that changed. The sun moved to our 9 o'clock position, mountains filled our view, and lakes glittered below. Like a kid in a candy store, I was in and out of the Tacoma a dozen times, trying to soak it all in. 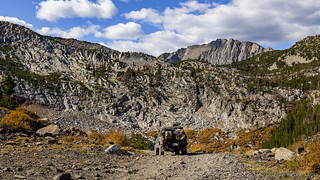 Over the final ridge. 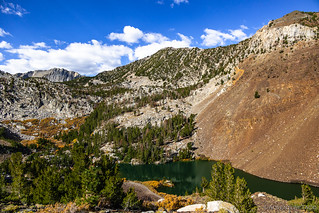 There was even an island!

All that stood between us and the lakes edge were a few switchbacks. The first of these was reasonably tight with a precipitous drop, but a few seconds of tire spotting by @mrs.turbodb made quick work of the situation and soon it was time to explore on foot. 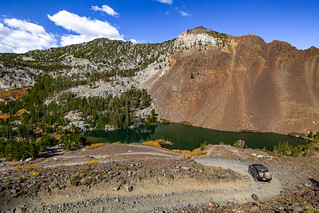 After the first switchback, the rest were plenty wide. 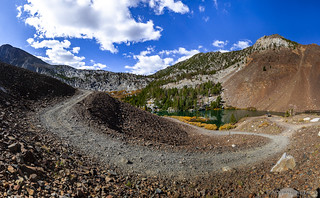 This is where I'd camp. On the edge.

We spent about 45 minutes wandering around the near side of the lake, glad - if a little surprised - to have it to ourselves. Naturally, the island was near the top of the "explore" list, and after snapping a quick shot of my co-pilot, I too made my way onto what turned out to be an island-shaped archipelago. 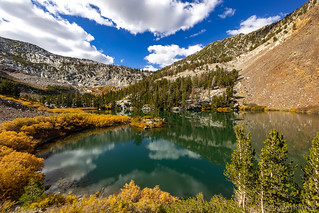 Let's call it an island. 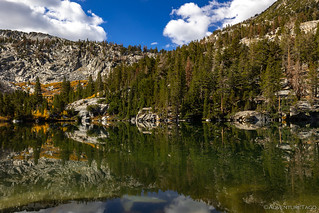 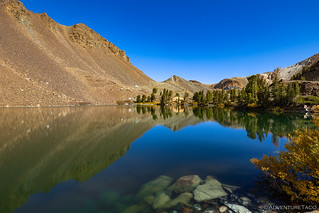 Anyone want to go for a dip?

With a long drive home planned for the rest of our day (and part of the next), we made quick time back down the mountain, shadows of the clouds dancing across the valley below us. 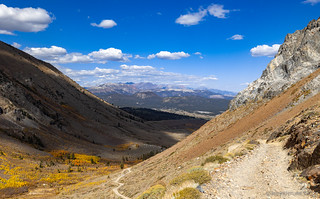 It was just as we reached the bottom of the trail that we ran into 7 Jeeps and a 4Runner. Clearly shareholders in BD and KC - and apparently getting paid by the kWH - they'd just finished airing down, and luckily, we were able to scoot by them just as they were starting up the trail.

Airing up, I reflected on the spectacle of their caravan inching up the hill, each one sucking dust from their buddy a few feet ahead. I can't imagine being the guy with a 7-KC-light-bar on the roof, and 3 LP6s on the bumper, all pointed at the rear-view mirrors of the guy 20 feet in front of me - not to mention the solo 1st gen Tacoma coming down the trail the opposite direction. It could have been a cloudy day and we'd still have gotten a tan with all those lights pointed our direction.

But maybe I'm just stuck in the dark ages of camping, rather than transitioning to proper overlanding.

They Built a Road to the Sky | Eastern Sierra #3