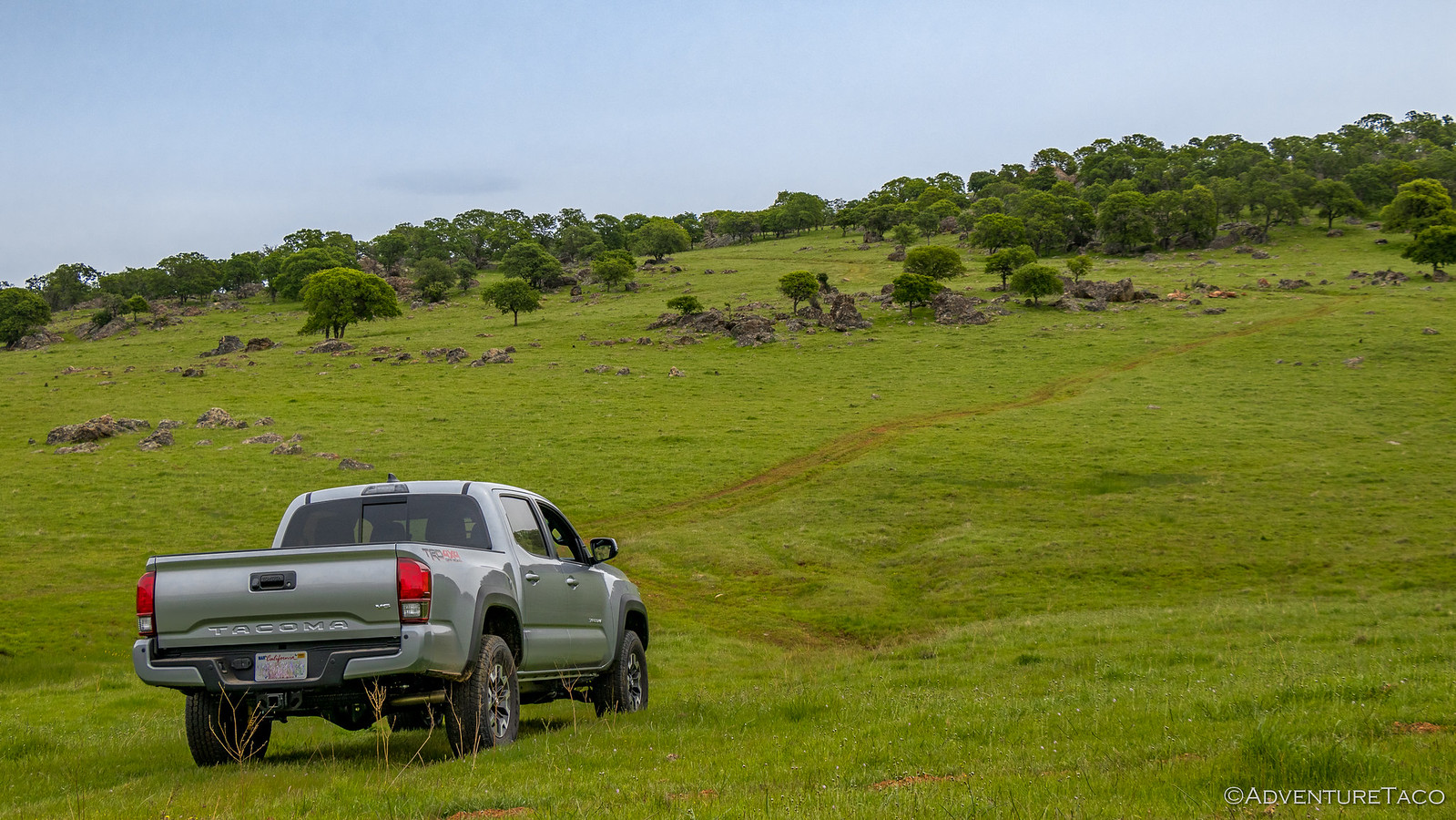 This trip started out unlike most others. We didn't climb into the truck, instead we climbed onto a plane. And at this point, @mrs.turbodb didn't know anything about the surprise waiting for us in California.

It's a short flight though, and so a couple hours later we were in a parking lot, keys in hand - me with this big goofy grin on my face, and @mrs.turbodb completely in shock. Could this really be happening? It was so unlike me. 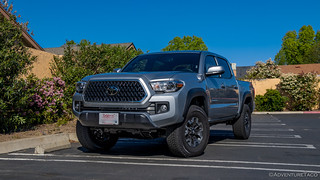 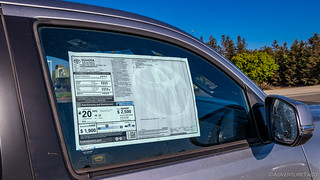 Of course - as would be the case for anyone, the first order of business was to take some photos. The silver color was great - from experience, I knew it'd look killer out on the trail. Of course, it was a TRD Off-Road, because if you're going to drive a 3rd gen Tacoma, what's the point without crawl control? And, it was a V6 - for more #herspers. 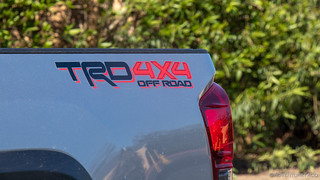 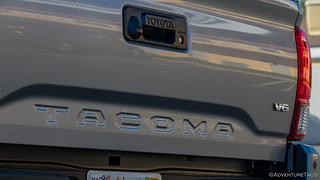 Oh, and I flexed it out. Because I was going to start off on the right foot this time - the #instafabulous foot. I should note that it was actually harder to get it up on this curb than I thought it would be - the OEM tires not providing the grip I'm used to in the 1st gen. But, I'm sure I can fix that with some better tires, eventually. 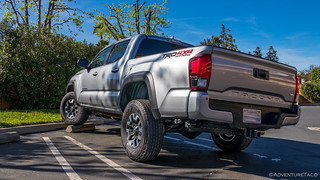 For now, we had a couple days before we had to head home, and we were going to make the most of them - plans in hand to go out and explore some of what California had to offer - the double cab offering us more space than we knew what to do with, coming from a 2000 Tacoma.

As we made our way south towards dirt, we got to try out some of the new systems. First impressions were definitely positive - at least mostly. The cab is so quiet - we don't have to yell back and forth to be heard over the road and wind noise. The adaptive cruise control is sweet - once I realized that you set it to the max speed you want to travel and then just forget about it, I really started to appreciate it. Oh, and the gas mileage - we didn't know it at this time, but it's like 25% better than the 1st gen...at least in it's stock form.

Of course, there were some things right off the bat I didn't like as well - the auto transmission being the most obvious, it's shifting behavior a bit clunky.

But I could ignore that - it was just a detail - one I hoped I'd get used to as we provisioned at the grocery store for our adventure the next day.

The next day couldn't come early enough. Not knowing for sure if we'd have the Tacoma, we'd stayed in a hotel, so the anticipation that'd grown by morning was immense. We piled into the truck and headed out - curious what it could do in it's stock form, sure that it'd be capable after my recent Ruining Around Utah trip, where Brent (@PcBuilder14) had a basically stock 3rd gen on much tougher terrain.

Soon, we were on the trail. 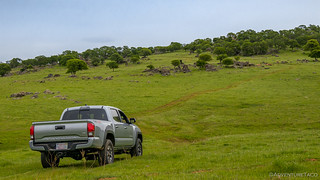 We were all smiles. The auto that had felt clunky on pavement was actually quite nice - at least compared to the manual - when on dirt, at least in the sense that I didn't really need to think about it or worry about stalling. As we headed up into the hills, we stopped to admire the beautiful surroundings in which we found ourselves - everything a brilliant green - spring in full effect. 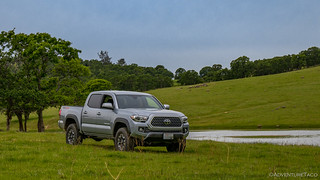 Reservoirs full of water and fish, we even got to see an osprey swoop down and snag a reasonably large fish, and then retreat to a nearby snag to enjoy its feast. 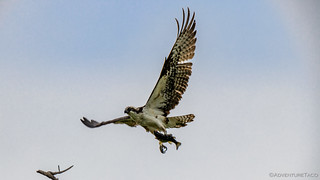 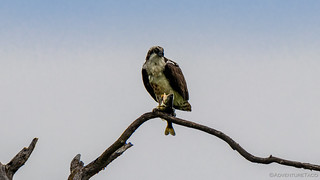 We continued on - the 3rd gen performing very well, even as we flexed it out - pushing it further than most would in their first 24 hours for sure. Of course, this meant that we also got to test out 4WD - some of the terrain (and line choices) a bit too slippy for the stock tires. But nothing it couldn't handle with ease. 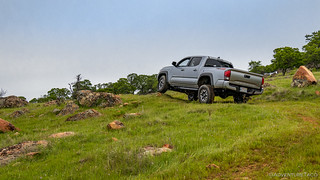 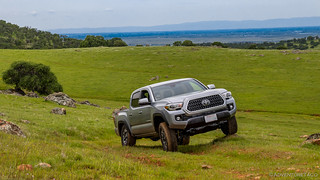 I'm sure there's a way to turn it off though, just need to read the manual a bit more.

At any rate, our exploration took us miles and miles over the pastoral land that stretched in front of us. Along the way we discovered more amazing views, and even the ruins of an old cabin site - albeit likely much newer than the Native American ruins I'd come from in Utah. 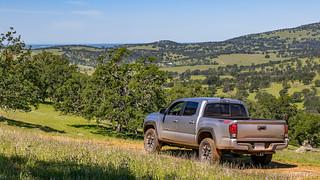 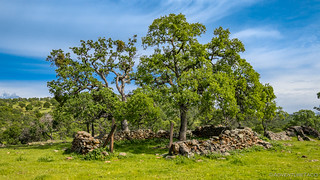 We even came to our first water crossing. It was small and rocky - I proceeded through slowly, unsure what the stock, P-rated tires could really handle in a situation like this. But, it was reasonably muddy as we crossed the creek, and we did get to experience the traction control - something non-existent on the much-older 1st gen. 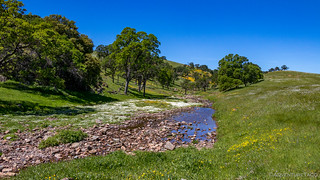 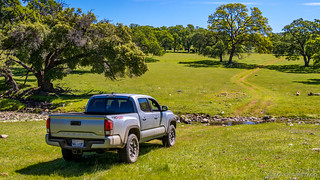 Up and over the next hill, we found ourselves at yet another reservoir - the water rippling in the wind, the sky blue overhead. The perfect place to get out and take a stroll - a little distance giving a nice vantage point of the silver double cab against the greens, yellows, and blues. 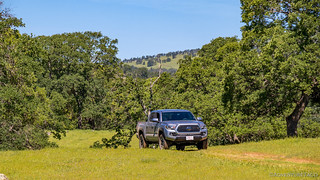 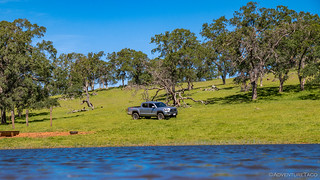 Eventually, and - as it generally seems at the end of every trip - unfortunately, it was time for us to head out. As we made our way out of the mountains and back to civilization, we marveled at the first 48 hours - just imagine what this thing could do with a few mods here and there!

And then - our last water crossing. It was one we'd taken slower when we'd come this way early in the trip, still new to driving this new beast. But this time I felt more comfortable, and the last two days had shown that even in stock form, this truck was going to have no problem with a little speed through a creek much larger than this one.

So I pressed the skinny pedal and let it eat. 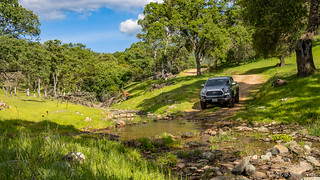 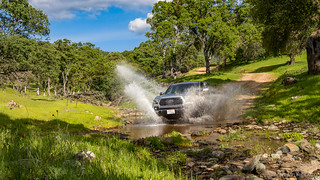 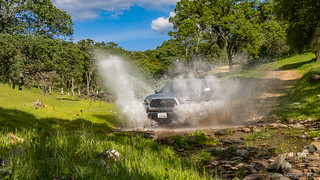 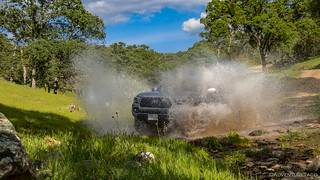 As we headed back onto pavement, we'd had a blast. Seriously - so much more fun than I think either of us had thought possible. We'd talked about little over the last two days besides the new truck - a true indication, in the case of @mrs.turbodb of the fun it was providing.

All that was left was to head home. So, we returned the truck, and few home to our own. 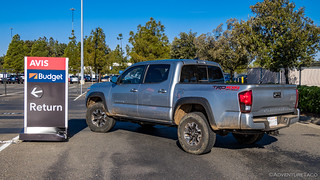