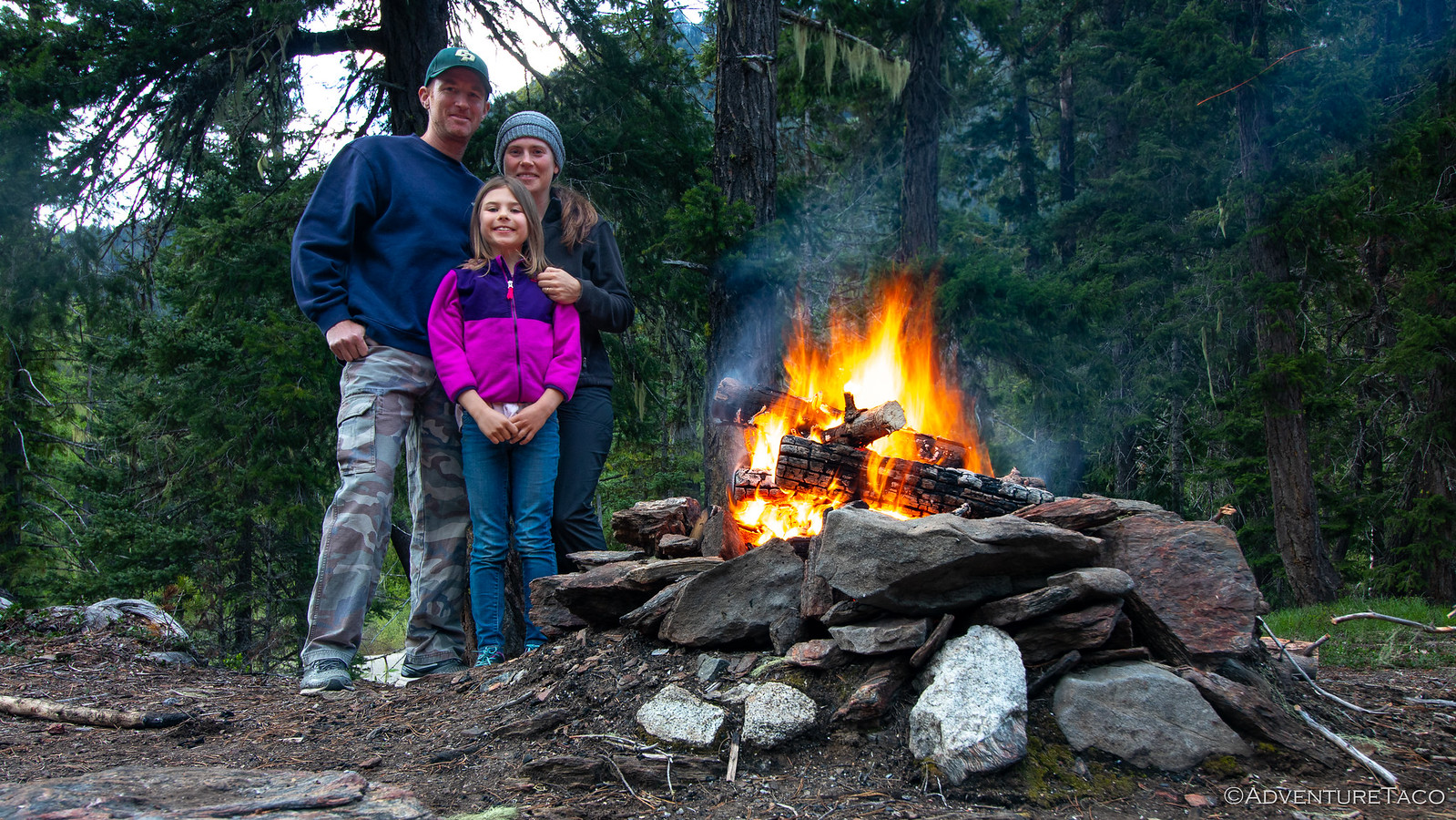 "Best Day of My Life" - @mini.turbodb's First Trip in the 4Runner

With all the recent work on the 4Runner, I wasn't the only one who wanted to put it all to the test. Upon seeing the storage/sleeping platform, @mini.turbodb had declared, "We need to go camping right away!"

I don't know if she's been well-trained or it was just a wrinkle in the space-time continuum, but it was music to my ears.

So, we found the first weekend that we possibly could and scheduled a single night camping trip to one of our favorite "quick getaway" spots outside Leavenworth, WA. And then we watched the weather. As the weekend drew near, the forecast steadily improved until it was mostly cloudy with a bit of rain. Not ideal, but better than wish-we-weren't-here-'cause-rain-all-the-time.

Our plan was to head out Saturday around mid-day, after @mrs.turbodb wrapped up a few morning engagements, and to grab lunch at one of our favorite Mexican spots in Monroe on our way to camp.

The morning was going reasonably well as @mini.turbodb and I got things ready to go - the tent loaded up on the top of the 4Runner, sleeping and cooking gear into the storage area, and the fridge full of two whole meals - pasta for dinner and cereal for breakfast.

And then, with an hour before @mrs.turbodb would be back, we were done. Never short on energy, @mini.turbodb reminded me that she would really like a bench/platform in her favorite climbing tree - and that we might as well get that taken care of while we waited.

We found the perfect spot and I worked out the logistics and the day was off to a great start. 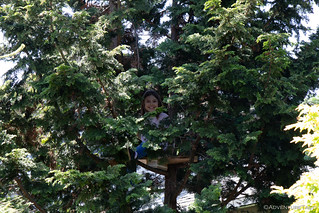 It wasn't long before @mrs.turbodb showed up, and in high spirits we all piled into the 4Runner and headed for lunch. A few minutes onto the freeway, a voice piped up from the back seat:

This is definitely the best day of my life.@mini.turbodb

As hard as that was for us to argue, we inquired as to what exactly made this the "best day?" The answer of course should have been obvious - a brand new platform in her tree and she got to go camping to her favorite spot and she got to sleep in the 4Runner for the very first time.

How much longer do we have? I think this is the worst day of my life.@mini.turbodb

How quickly a boring, 2-hour car ride can change things!

At any rate, as we pulled into our camp site, I was relieved to find the tent still attached to the top of the 4Runner - the roof rack apparently strong enough to keep it from flying away at highway speeds. 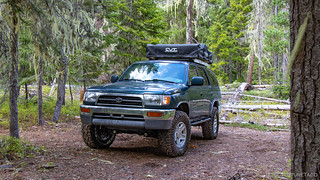 I wasn't however thrilled with the condition of the cover. One of the benefits of having the tent behind the cab of the Tacoma is - apparently - that all of the bugs on the highway hit the jetstream of the cab and either die on the windshield or fly over the top of the tent. Not so on the 4Runner.

Regardless, I set about deploying the tent - a familiar and yet more-difficult task given it's height several feet higher off the ground - as @mrs.turbodb helped @mini.turbodb get her own sleeping situation arranged in the back of the truck. 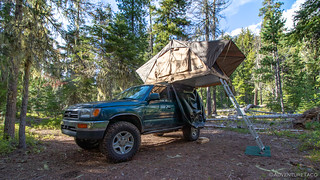 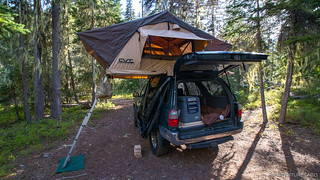 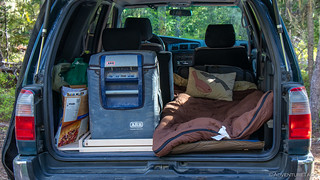 Then - of course - it was time to explore! We have several favorite spots along the river, and we visited them all. I'd snuck in my Muck boots, and with the creek higher than we'd ever seen it, I took the opportunity to mention that I was apparently the only one who could make it to one of our favorite beaches.

Not that it mattered - the entire thing was under water. 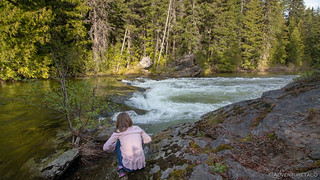 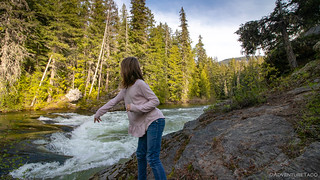 We eventually found ourselves at a nearby bridge, the water roaring beneath us, and the clouds finally parting - briefly - above us. 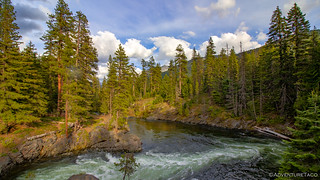 By now, @mini.turbodb was excited for pasta - her favorite - and we were ready to relax back at camp. As @mrs.turbodb got dinner ready, I set about making a fire - a reasonably easy task given the fact that we were the first ones to camp here this year, so there was plenty of dead wood to pile high in the pit

And - naturally - pine cones for @mini.turbodb to collect and throw in the fire. 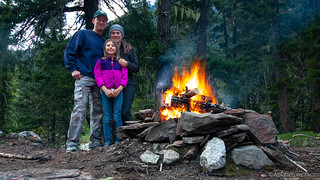 Dinner and fire tending dragged on well past one of our bedtime, but when bed is as exciting as the back of the 4Runner, it's not really that big a deal when you're told that it's extra late and time to hit the sack.

We enjoyed the fire a bit longer as the last of the light left the sky - still mostly cloudy and so sunset-less - before hitting the sack ourselves. 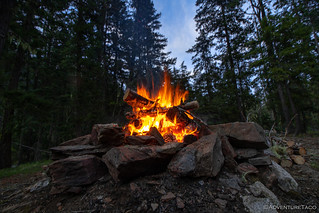 As expected, we got some rain through the night - the perfect time to get it, really - but that all stopped by 8:00am Sunday morning, when @mini.turbodb was out exploring and us oldies were still all cozied up in bed. Of course, that can't last very long with a little terror running around, so we eventually climbed down the ladder to enjoy what was turning into an amazing day. 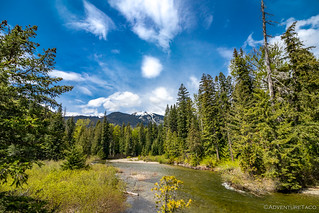 Cereal for breakfast, some more exploring, and even a morning camp fire were enjoyed and just after noon we had everything packed up and ready for the return trip. The whole ordeal had been - as usual - a resounding success, and everyone's looking forward to our next outing.

Can't ask for more than that!

This isn't a full-blown review since this wasn't a very long trip, but there are a few things worth noting on the 4Runner: