Unlike most stages of the Wyoming BDR that were between 100 - 150 miles, the final stage was a mere 43. Surely, we thought, we'll be done in an hour or two tops. Naturally, we were mistaken.

Already remote - starting from the junction of WY-14 and WY-14A - crossing the highway immediately landed us on gravel roads where we wondered aloud what we'd do once we reached the end of the route. It was a bit of a mystery given a few salient points: 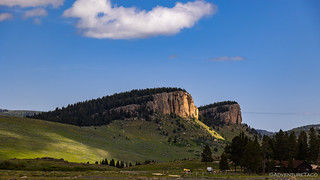 Just a few minutes into Stage 8, Twin Buttes was aglow out the windshield. 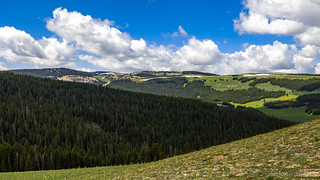 Still in the Bighorn Mountains, the same spectacular views from Stage 7 stretched to the horizon.

In the end, we realized that we had plenty of fuel and that it wouldn't really matter from a "how do we get home" standpoint, so we set our sights on more immediate issue: somewhere to eat lunch. We wanted something with a view, and a bit of wind to keep the mosquitoes at bay, and before long a nice wide spot in the road offered just such an opportunity, plus some.

There, a few hundred feet further up the ridge, was a cairn. Not just any cairn, this was a 12-foot tall behemoth, and we both knew that we were going to check it out before any sandwiches were made. 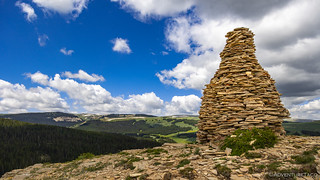 @mrs.turbodb thinks this was a Basque sheepherder's cairn. Anyone know for certain?

Naturally - after reaching the top and admiring the handywork - we glassed the surrounding hillsides for nearby markers, discovering none. And so, still wondering what we'd stumbled upon - it was so tall, after all - we headed back down to the truck for some tasty tuna sandwiches, potato chips, and a Cosmic Crisp apple. And then, we were on our way.

We'd follow only three roads over the course of the afternoon, the first being NF-15 and the last being NF-11. Like the connection between them on NF-143, each wound their way through the Bighorns, first leading us west - away from the highest peaks, then north to the edge of Wyoming. Along the way, we stopped frequently, these mountains packed with surprises, each of which warranted investigation or amazement. 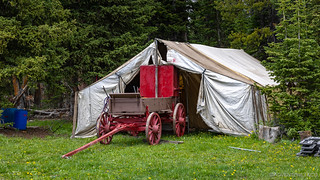 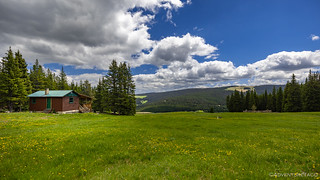 This cabin - in the USFS style, though we weren't sure if it was a private inholding - sure did have a nice spot on the edge of the meadow, high in the Bighorns. 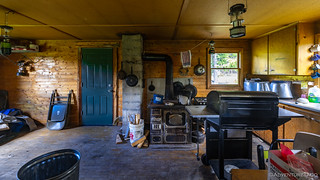 Eventually, we turned of NF-15 and onto NF-143, a splendid little two-track that traced its way along one ridge after another, through mint green meadows and fields of snow hanging on to the last few weeks of existence. Combined with cotton ball clouds in the sky, there was no part of the trail where we made slower progress.

This was the beginning of a one-mile section of trail that took us 30 minutes to travel. 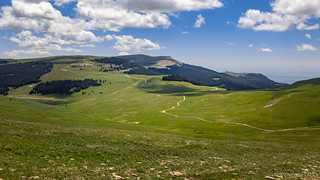 I always love seeing a trail disappear into the distance.

On reaching NF-11, the first thing that caught our attention - though, I must admit that we'd seen it along the entire route - were all the RV trailers that'd been left nestled into nooks and crannies of the forest. There were dozens - perhaps hundreds - that were squirreled away. Were they reserving a camp site for later in the summer? A home base for hunting should a tag come through? We had no idea, but with each passing mile one thing was obvious: trailers per acre were on the rise. 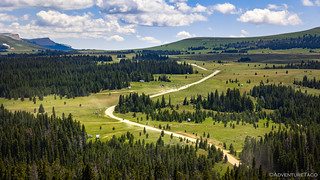 I always wondered where the parking lots full of RVs go.

The second thing that caught our eye was a barrier that'd been pushed to the side of the road. It seemed like it was a bit out of date - by perhaps 3-5 days - but we'd have no way of knowing for sure until we made our way around it to give the remainder of the route a try. It was time for our final push to the border! 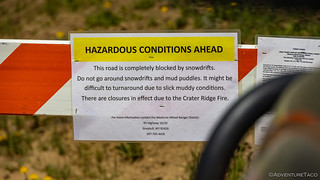 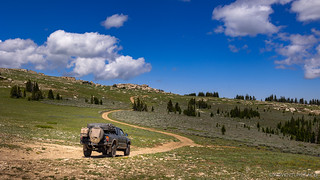 Soon, we were once again working our way along ridgelines. 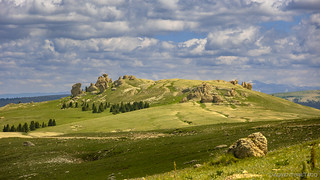 Green goblins, cheering us on. 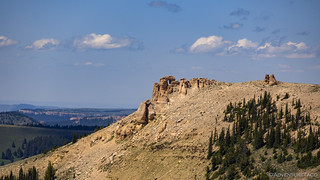 We spotted an arch, though we could never get close enough to explore. 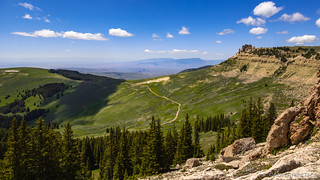 In the distance, Montana.

And then, with little fanfare, and certainly less signage than we've ever seen at the end of a BDR route, we reached the end. Wyoming's border - with the Crow Indian Reservation - was marked by an unassuming barbed wire fence and a hastily placed sign.

The road continued to the north but seemed rarely - if ever - travelled; understandable given that permission must be obtained to continue through the reservation. 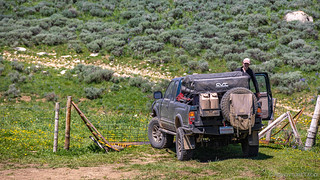 End of the road. 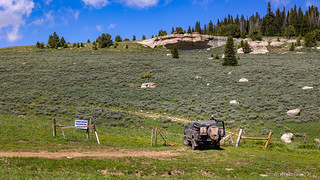 Contemplating our achievement for a few moments, it was time to go. We knew that the answer to the question we'd had at the start of this final stage of the Wyoming BDR had been answered - we wouldn't be continuing north. Rather, we'd be turning around and retracing our path to WY-14A, where we'd make our way out of the Bighorns. 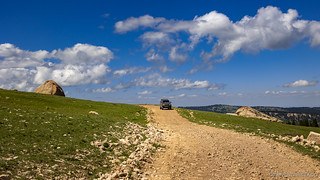 Even on our return trip, new sights caught our eye. Mushroom rock.

By every measure, the Wyoming Backcountry Discovery Route had delivered. Smiles on our faces, the discussion immediately turned to our favorites: our favorite stage of the route, our favorite single experience on the trip, our favorite BDR to date.

One thing was unquestionably true: we needed to come back to Wyoming.

Bonus Chapter: Plus a Little More

Headed toward home on WY-14A, we travelled less than a mile before diving off the side of the road to a nearby attraction that we weren't even sure we'd be allowed to see: Medicine Wheel. Still, with our fingers crossed, we made our way up Medicine Mountain and soon found ourselves in a parking lot, just more than 1.5 miles from the sacred Native American Indian site.

There, some USFS employees were just heading out for the evening, but told us that we could walk to Medicine Wheel, as long as we were respectful of the site - staying outside the fenced area, respecting the offerings left in the area, and as always, staying on the trail. Excited, we thanked them for the info and set off toward the site. 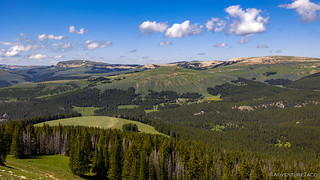 As we hiked along the ridge towards Medicine Wheel, we could see our earlier route to the Wyoming border, high up in the Bighorn Mountains. 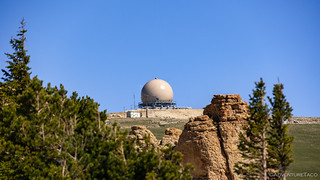 Medicine Mountain is now home to a radome, in addition to Medicine Wheel.

Several of the prehistoric trails that led through the Big Horn Mountains intersect here. The first people using these trails may have entered the area as long as 10,000 years ago! Over time, possibly due to rising temperatures and a decrease in moisture, the buffalo-centered plains people interacted with the hunters and gatherers of the mountains, sharing this trail system. The trail you are now following was the main access to the Medicine Wheel for these Ancient Americans.

Today, Native American Indian people and cultures from around the world still cross paths here. Native American Indians, representing 81 different tribes, still utilize this ancient trail to practice their traditional ceremonies. Some traditional people prepare themselves for over a year for their journey to the Medicine Wheel.NPS Information Sign 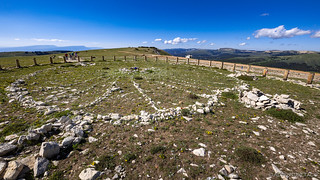 What is left of Medicine Wheel, with 28 spokes radiating from the center. 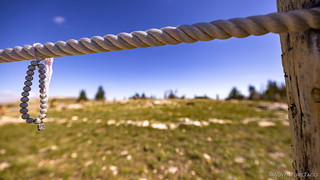 Offerings, left by Native American Indians, can be seen along the fence, within the Medicine Wheel, and dotted around the landscape of this sacred place.

The Medicine Wheel is about seventy-five feet in diameter and has twenty-eight spokes. The origin of the wheel, made of limestone slabs and boulders, is not clear. Present-day Indians have no known legends or traditions to explain its background, but the pattern and orientation imply that the builders were sun worshipers.

George B. Grinnell, an expert on the Cheyenne culture, pointed out similarities between the Medicine Wheel and the Cheyenne medicine lodge, and other experts on native American culture also suggest the wheel resembles the Northern Cheyenne Sun Dance lodge. A buffalo skull found facing east in 1902 suggests a connection with the Sun Dance, but the wheel could be merely a marker for important ceremonies.

A piece of wood recovered from the walls of the west cairn provided a tree ring date of 1760. The hub consists of a circular stone mound, about three feet high, from which the spokes radiate, possibly representing the days of the lunar month. Around the edge of the wheel, at different distances from the center, are six "medicine teepees" to symbolize the planets. In the 1930, the teepee on the east side was higher than the others and nearly square, and its
openings were on the north side, whereas all the other openings faced the hub. The teepees may have been shelters for the chiefs or medicine men during worship, and once there were large excavations under them. Now they appear only as small rock mounds.Roadside History of Wyoming

After spending some time at the wheel, we headed back and began the long trip home. We'd stop along the way for fuel and food, and once - outside of Pipestone, MT, - to camp. Coincidentally, that camp site ended up being at a place called Ringing Rocks, and we couldn't help but check them out when we awoke the following morning. 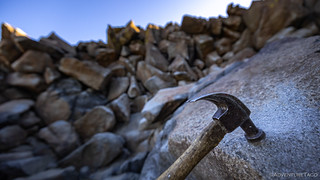 A sign posted at Ringing Rocks warns visitors that they will no longer ring if they are removed from this location. The sign does not lie.

Wow. The science behind this is sort of cool, but if you ignore it, the experience is even cooler.

Packing up the tent, we pulled the bedding - pretty gross after more than a week with two bodies and some of the hottest nights we've had in a long time - and put on a clean change of clothes. We had a 12-hour drive in front of us to reach the comforts of home, but we were already discussing how we could get back to Wyoming!

Atlantic City to Shoshoni - Through the Wind River Basin - WYBDR 5

Ten Sleep to Burgess Jct - Beauty of the Bighorns - WYBDR 7

What a Great Route - WYBDR Epilogue 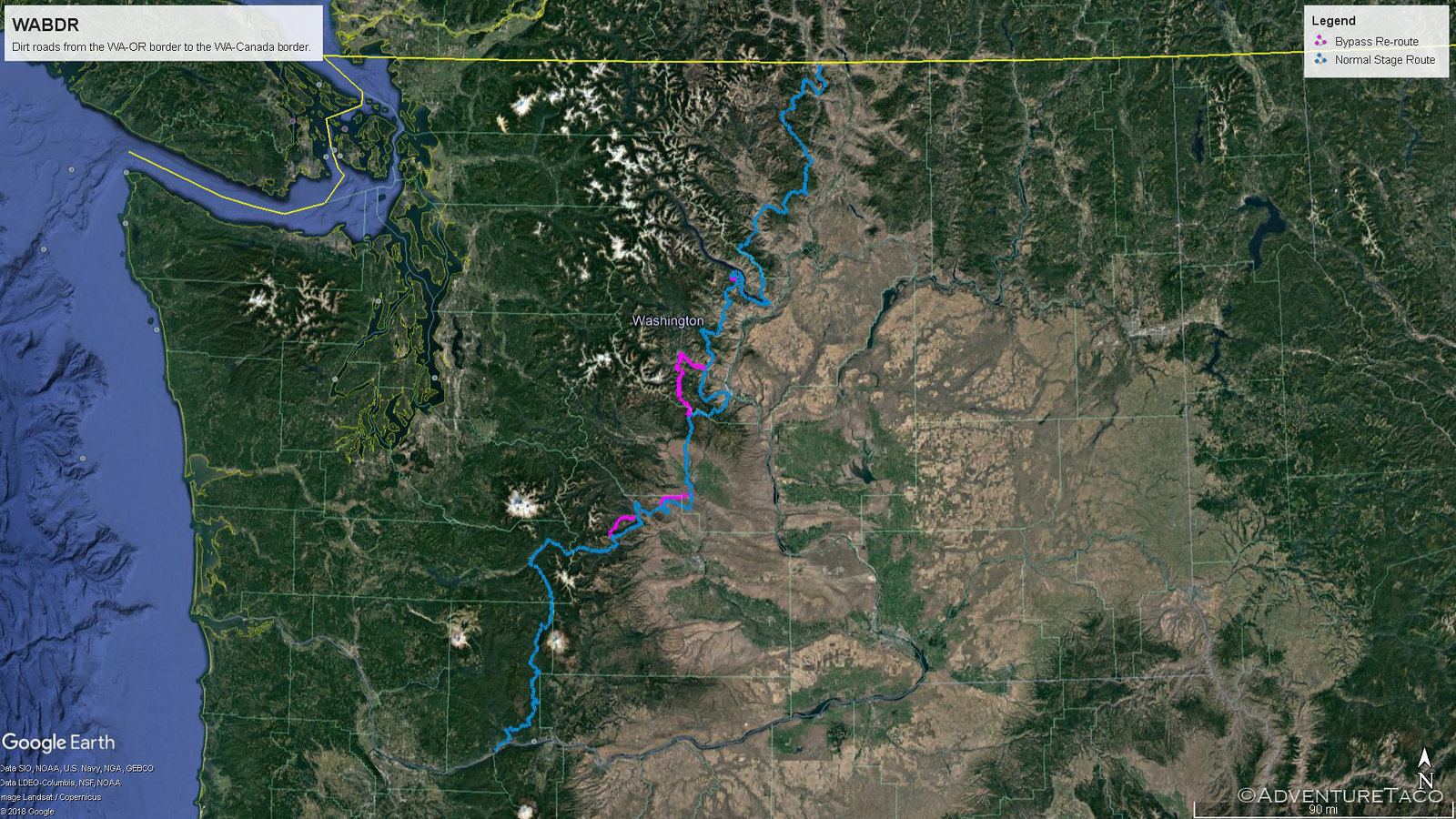 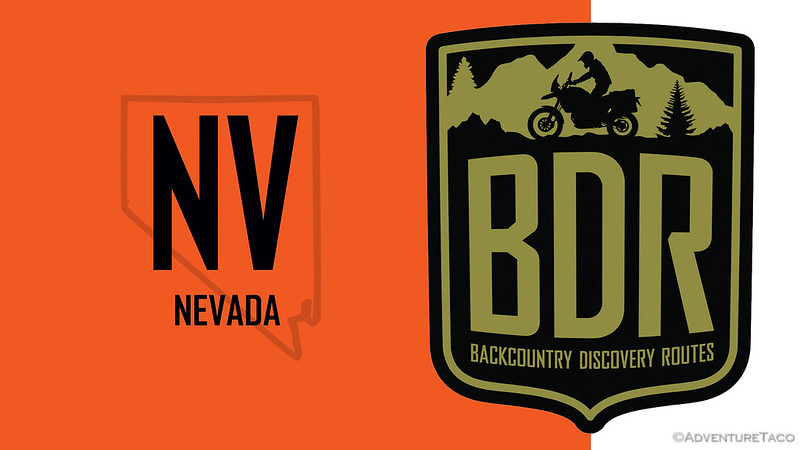