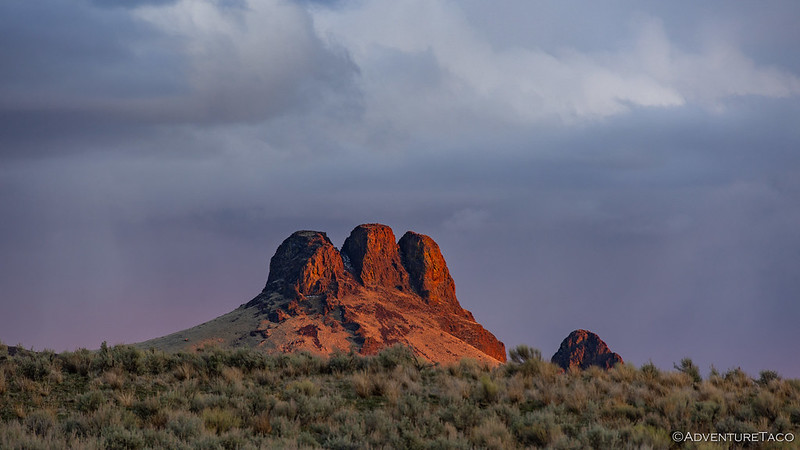 We've visited the Owyhee region of Oregon (and Idaho) several times, each time discovering something new, something special. Looking on a map, the region - located in southeast corner of the state - seems to be an empty wasteland. I assure you, nothing could be farther from the truth! Surely, it is remote, and from any single spot the landscape can seem monotonous - but all it takes is a little looking to find the gems hidden in plain sight. With a few days to explore, I decided it was time to look for remote areas we'd never before visited.

Plus, another benefit of a trip to the Owyhee Canyonlands was that it is reasonably close to home - at least compared to what we become accustomed to during our long drives south during the winter months. At only 9 hours, we could probably even do a little exploring on the first day of our adventure!

Stringing together a series of roads that I hoped would simply exist, I plotted a course that would lead through deep canyons, to petroglyph carved rocks, and along the edge of thousand-plus foot cliffs. All - hopefully without seeing another soul - in the remote Owyhee Outback.

With rain forecast for the area on Wednesday night - our usual departure day - and through Thursday morning, I suggested to @mrs.turbodb that we delay our start by a day and head out at 3:00am Thursday so we'd be there a few hours after the rain had stopped. Hopefully that would allow us to avoid the worst of the mud, which can turn the roads in the area into a slick, slimey mess. That was just fine with her, and we found ourselves pulling out right on time Thursday morning.

We'd made it three hours into our drive when things went sideways. @mrs.turbodb had forgotten that she'd scheduled something for Sunday, and there was a mad dash to figure out whether it could be fit into the plan. Needless to say, it wasn't happy times in the Tacoma when we turned around and headed for home so I could drop her off and do the trip by myself; seven extra hours added to the "short" drive.

As such, it was 4:30pm when I arrived in the Owyhee area, with Succor Creek Road being my entrance into the canyonlands. The sky was ominous - scattered showers still in the area - but the sun was starting to poke through in places as well. I knew the roads could be...interesting. 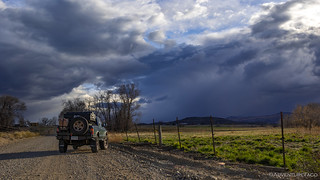 Hitting dirt and airing down to some really nice light. 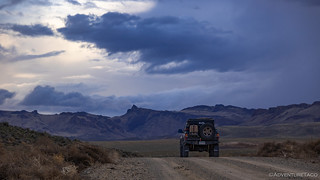 Succor Creek Road itself was in good shape.

I planned to spend as little time on Succor Creek Road as possible - the point of this trip being to get into the outback of Owyhee - so after only a mile or two, I turned onto Camp Kettle Creek road and quickly found myself at Devil's Gate, and spent a few minutes wandering in the rocky outcropping. 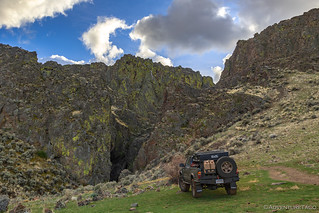 Not a gate to anything. 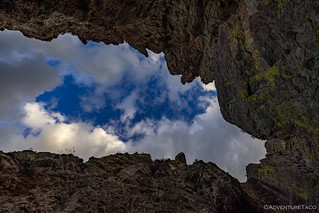 Could use more blue sky.

I'd considered camping here, but the ground was extremely slippery and a group of eight cows had taken up residence in the same area, so I decided to press on, my tires doing their best to pull the Tacoma over the terrain as chunks of mud pelted the roof. 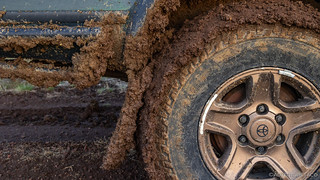 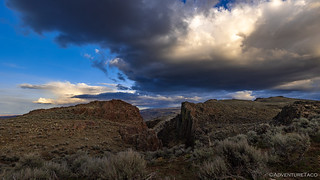 The top of Devil's Gate.

Like much of the Owyhee Canyonlands, this area is largely BLM land leased to ranchers. As such, there are numerous barbed wire fences, and gates to navigate - usually not any sort of problem when the weather is dry. Today however, the mere act of stepping out of the truck immediately added two inches or more of mud stuck to the bottom of my shoes and I found myself hoping that each gate I'd approach was already open.

None of them were. 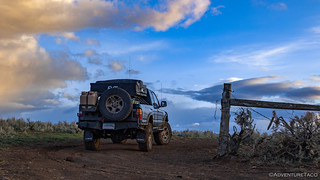 Through another gate. By this point, I'd sort of given up on not having a bunch of mud in the truck. At least the weather was continuing to clear up.

Heading south now, a short stint on McIntyre Spring Road shuffled me over to an unnamed road that passed the trailhead we'd taken on our very first trip to the Owyhee's, when we'd hiked The Honeycombs. From this point on, it was going to be new territory and the unknown for me - something I found myself relishing, even as I could tell that it was time to start looking for camp.

Slipping and sliding, I followed the rolling hills, looking for a suitable spot to call home as the clouds made for a wonderful canvas on which the sun could work its magic. 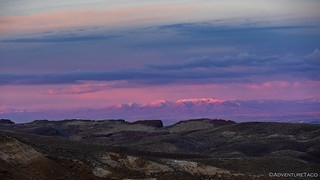 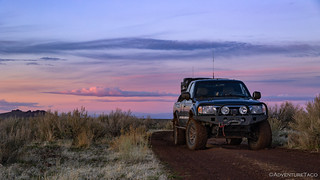 And then, just before the sun fell below the horizon, it found a small opening through which it could illuminate one of my favorite features of this area - Three Fingers Rock. 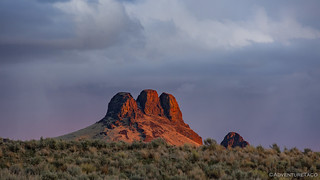 I've never seen Three Fingers from this side before. 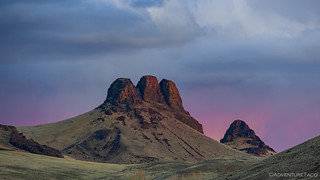 The light on the rock lasted only moments, and soon, a pink glow behind it was all that remained.

I pressed on, still looking for a "less muddy" spot to open the tent. At one point, I passed two Prius' - the ground tents of their owners set up in what I can only call a mud pit - nearby. Cooking dinner over a propane stove, they seemed content enough, though it looked like a miserable way to spend the night if you ask me. Perhaps what you get for driving such a vehicle into this area in the middle of a rainstorm?

Eventually, I spotted a short side spur to the to of a knoll and knew I'd found my site. Still muddy, at least the terrain would dry out "first" from the overnight winds and morning sun. Not that "first" would necessarily be "fast."

I made a quick dinner and got the tent deployed before retiring to the cab of the truck for a bit of reading and a bit of work on photos. It'd been a reasonably calm evening to this point, but just as I wrapped and got myself ready for bed, the winds picked up. I was glad to have oriented the truck in such a way that the tent wasn't trying to fold up on itself, and with earplugs and a cap, I cozied down in the comforters - hoping for a good night sleep and a drier day in the morning.