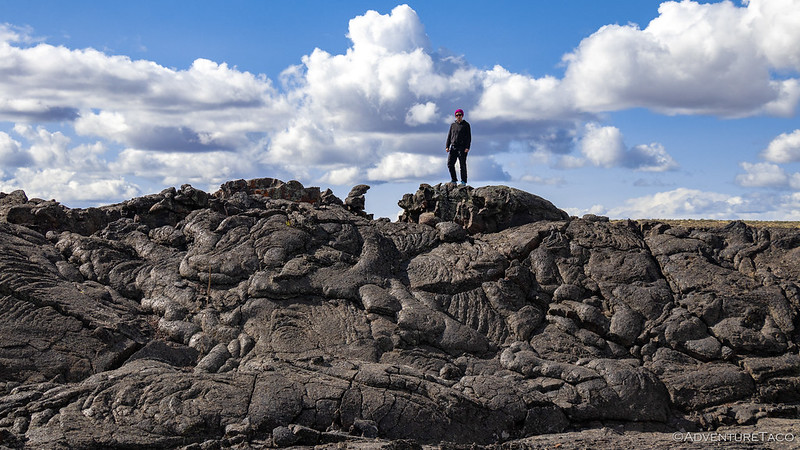 Camping at a Lake in a Lava Flow - Owyhee #2

Refueled and windows cleaned, we left Jordan Valley, Oregon - heading west on on Highway 95. Our destination was Jordan Craters - a 3,200 year young lava flow - one of the youngest on the continent. We'd visited Coffeepot Crater - a large, breached cinder cone that is the source of the most recent flows - nearly four years earlier on our very first trip to the Owyhee Canyonlands, and this time we were headed for the opposite side of the 29 square mile flow. 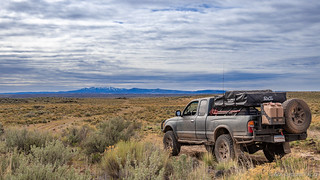 There were a couple places along the south side of the flow that I'd spotted on Google Earth as being interesting to investigate. The first was the Cow Lakes area. Home to a BLM campground, I knew we wouldn't be staying near the Cow Lakes, but satellite imagery showed that there was water interspersed with the lava flow in this area. Knowing how little organic material has made its way into the flow, I hoped that we'd see some amazingly clear, deep pools - a stark contrast to the lava flow itself. 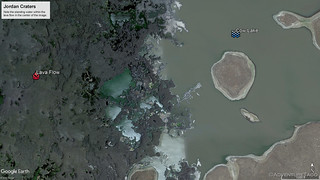 I knew even before we arrived at the lakes, that finding a drivable route that got us close to the flooded section of the lava flow was going to be the trick. The Cow Lakes are used as an irrigation source by nearby ranchers, and they've created several large canals that both join the lakes and draw water from them into their fields. As we pulled up to the crossing, I was happy to see that it looked passable. 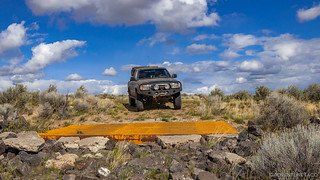 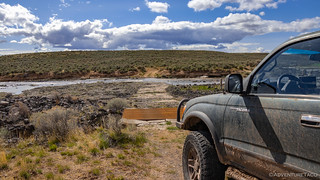 The deepest canal - clearly carved into the lava - was covered with a cattle grate, and the second flow was only about 18" deep - totally reasonable for the Tacoma. After a short time exploring the edge of the lakes, we jumped back in the truck and made our way to the other side - taking it as a positive sign that a sandhill crane was headed the same direction. 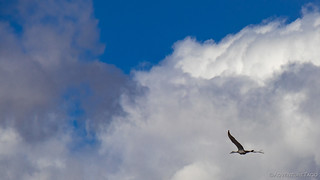 In search of water.

Unfortunately, as we continued along the road, it became clear that it wasn't taking us the right direction. Where we wanted to be was heading west and slightly south, but the road clearly veered more towards the north. In the end, it brought us to an overlook of the flow, but one with no spectacular pools of crystal clear water.

Still, the demarcation line between the lava rock and high desert was striking. 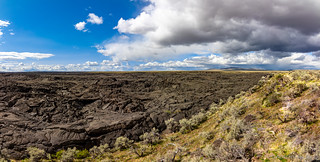 What a difference a few feet makes.

Even without the water, we were eager to experience the flow itself - the terrain so unlike most other that we encounter, so we headed out onto its surface to explore the nooks and crannies. 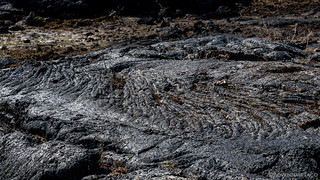 A river of rock, frozen in time.

As we jumped around from lava tube to lava dome, there was plentiful evidence that nature is trying to reclaim this desolate area. Lichens - some of the brightest I've seen, and mollusk shells dotted the surface. Here and there, enough dust had blown in from the surrounding area to sustain a plant or grass. 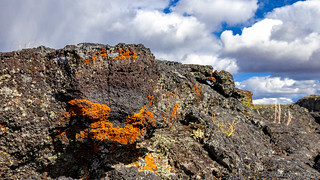 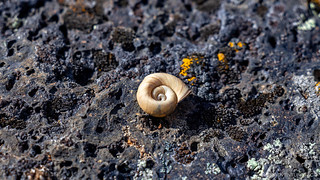 Further into the flow, the formations flourished - bubbles, ripples, and cracks all coming together to create an artwork of black. 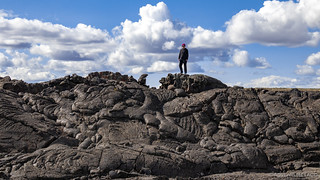 Eventually of course, we had the urge to move on - I'd scoped out a little place a little further west along the southern edge of the flow that I hoped we could camp for the night. With no roads on the flow, getting there meant backtracking a dozen miles or so, and then taking another road that would eventually wind its way back to the black. So out we went - through the water, past the campground, and away from the Cow Lakes until we found our turn and headed west.

Almost immediately we ran into a wee issue: we appeared to be in some ranchers driveway, and the rancher was outside tending to his recycle bin. Unsure if we were in the right place - though confident that we were on the route I'd planned - I drove up as slowly and respectfully as I could and inquired whether he minded our heading out the road that went through is property.

"Lots of gates to open," was his response.

A bit more inquiry and he let it slip that it was a county road, so we were free to continue on. "We'll be sure to close any gates we open behind us," I mentioned as I thanked him - something he seemed to appreciate - and we headed through our first gate. 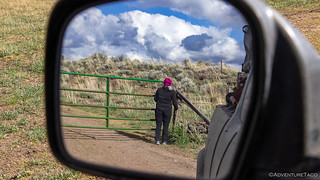 Even before entering the pen, we'd noticed the horses inside. All of them were beautiful, and this one was particularly friendly - trotting over to the Tacoma on both our trip out and back - just to see how we were and whether we might have something for him to munch on. 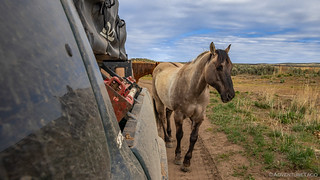 In all, I think we had something like four gates to open on our way through the ranchers property/lease, and a few more that were already open as he flooded his fields with water from the Cow Lakes. Much of the grass was still brown while we were there, but our guess was that within a few weeks, the entire area is going to green up nicely - it'll be a pretty sight when it does. 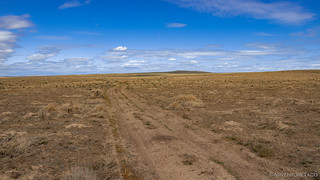 Tonight - or at least this evening - was not a calm night. Winds were in the 12-15mph range, and we knew we needed to find something a bit more sheltered if we were going to get any sleep. Back off of the flow, we jogged west. I'd noted a structure not far away, and had assumed it to be a ranchers property - another mis-assumption as we pulled up to its gate. Whoever had lived here was long gone, the cabin now posted as "U.S. Government Property," likely part of a BLM land acquisition some decades before. 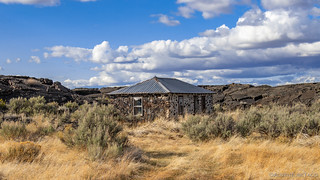 Whoever had built this cabin clearly had run into the same issue we were - and had nestled the cabin as close in to the 10' walls of lava as they could in order to block a bit of the westerly wind. We considered camping on the leeward side of the cabin, but with the high grasses and limited space, ultimately decided against it. Instead, we worked our way along a "frontage" road that skirted the lava flow, and found our own little wind shield that we could call home for the night. 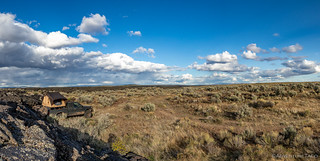 Both reasonably hungry given that we'd eaten lunch before 11:00am, the first order of business after getting the tent setup was making dinner. Tacos with guacamole was on the menu, and as always, hit the spot.

Then, with plenty of daylight left, we set about exploring again. The terrain was similar-but-different than what we'd seen a little further east. There was however one feature that was strikingly different - a lake in the middle of the flow! 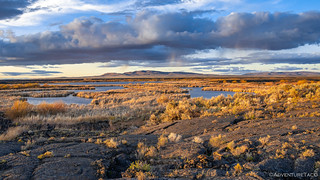 Called Batch Lake, it wasn't the stark contrast of waters-edge-to-lava that we'd been looking for earlier in the day, but the long rays of evening on last years reeds gave the place a very special feel. Migrating birds clustered in and around the lake, frogs starting to croak as the sun set on the horizon. 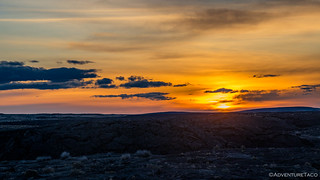 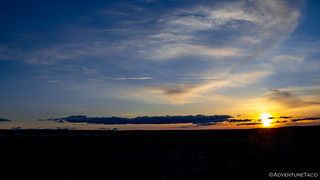 I forget exactly what time we went to bed that night, but it couldn't have been later than 9:00pm, a bit of light still visible in the sky. The wind kicked around - and we were mostly sheltered from it - until midnight or so, at which point things calmed down dramatically. Made me wish - a little bit - that we'd camped out on the lava flow itself, though our spot was great just the same.

Early to bed meant that we could be early to rise, and I was up at 5:35am the next morning - the morning light starting to play across the underside of the clouds out the window of the tent. 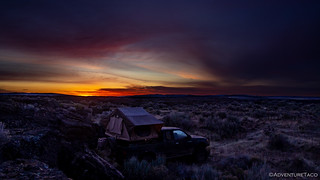 I stayed out for twenty minutes or so, enjoying the sunrise and watching the world around us wake up. A coyote in the distance, waterfowl on Batch Lake, and even the old cabin seemed happy to greet the new day. 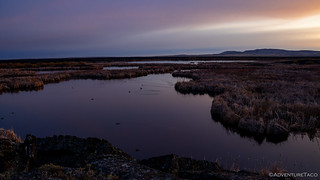 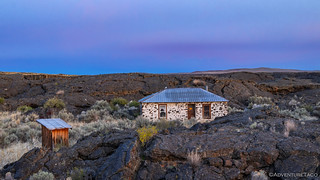 And, as often happens on trips like this, I decided that a few more minutes of cozy under the covers might not be the worst thing in the world - so I put away the camera and climbed back in to snuggle up next to @mrs.turbodb. A few more minutes turned into two hours, and it was after 8:00am when we finally decided that we should get a move-on to our day.

Not because we had a lot planned - at least as of yet - but because we weren't sure if what we had planned would even work. See - just as we'd been to Jordan Craters some four years prior, so had we been to Three Forks - the confluence of the North Fork Owyhee, Middle Fork Owyhee, and Owyhee Rivers. We'd gone there hoping to soak in some spectacular hot springs, only to realize that we couldn't cross the river to access them - so today, we were going to attempt a route from the other side. A route that appeared much more primative, and even more remote, than the one we'd tried years before.

As it turns out, that wouldn't even be the hardest route of the day! 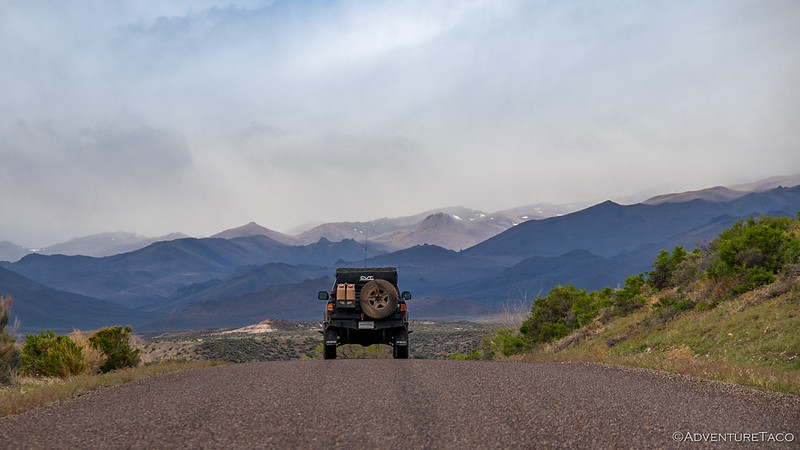 Camping at a Lake in a Lava Flow - Owyhee #2 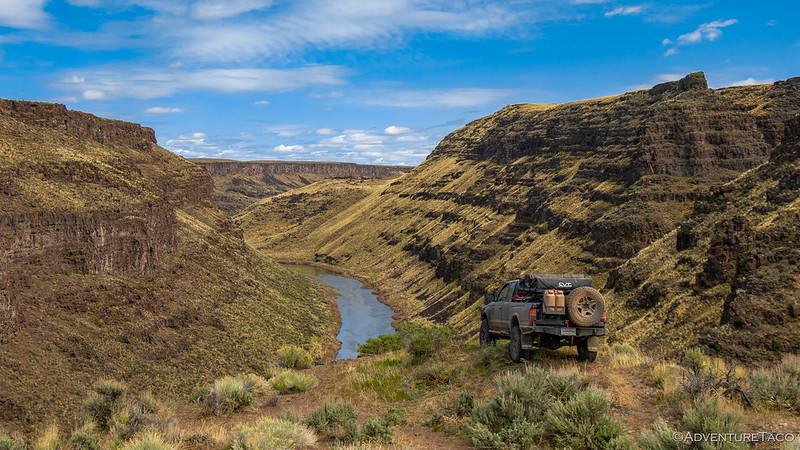 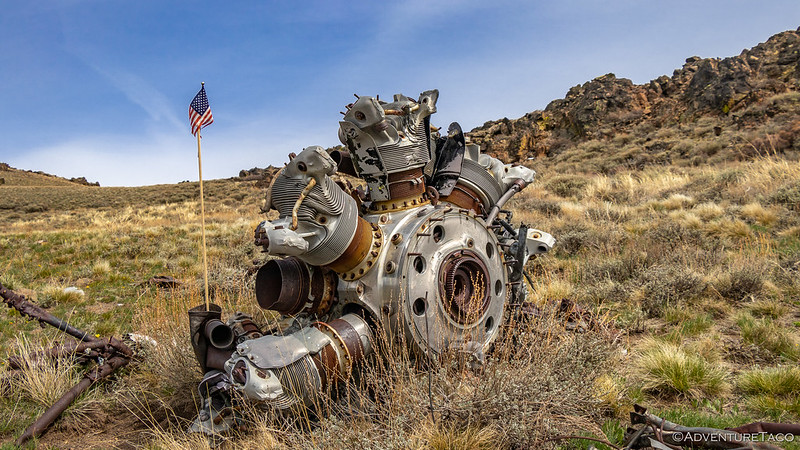 Searching for a WWII B-24 at Propeller Meadows - Owyhee #4