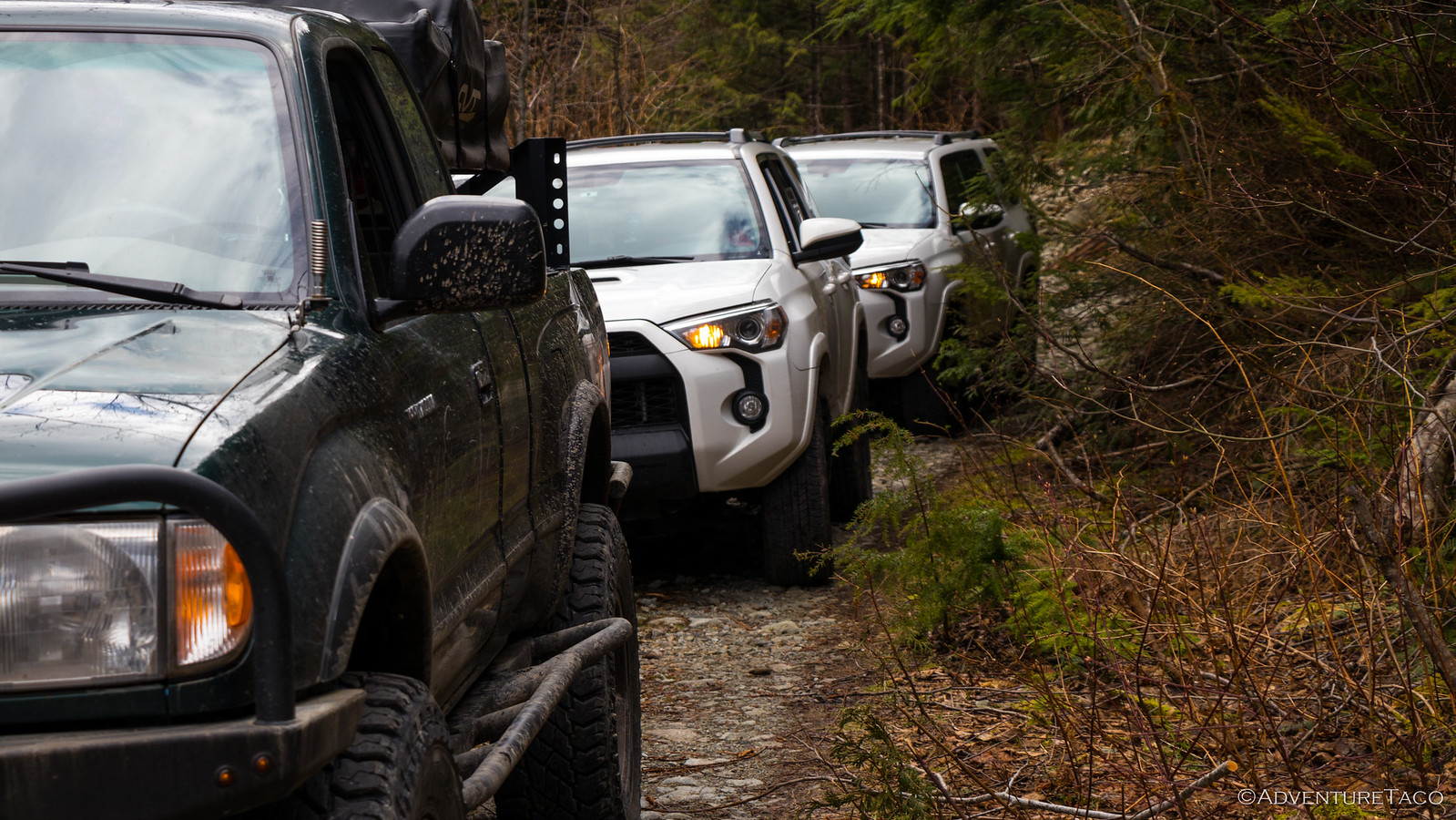 "You should get a 4Runner." is what I tell just about anyone with kids who asks what kind of car they should get. Of course, nothing generally comes of that - people opt for something more racy - a Tesla, or an Audi, those kinds of things.

So, you can imagine my surprise when Dave and Joe - a couple guys I worked with - each came home with a 4Runner and reached out to go "offroading"! Now that's cool.

Naturally, I wanted their first dirt in their new trucks to be fun - how else would I get them out again? - but I also wanted to balance that with something that'd be a little uncomfortable for them, not just some flat gravel road that you could drive in a Prius. Oh, and we had weather to contend with as well, since spring really only comes to the PNW around June.

In the end, we decided to take the trucks out to NF-9021 - something they were totally capable of, but that I knew would take Dave and Joe to the edge of their comfort zone, and then leave them wanting more - prefect!

We rendezvoused at the trailhead just after 10:30am, said our hellos, and ran through a bit of a debrief about the trail and offroading in general. The Runner's - matching white stormtrooper models - eyed the AdventureTaco. 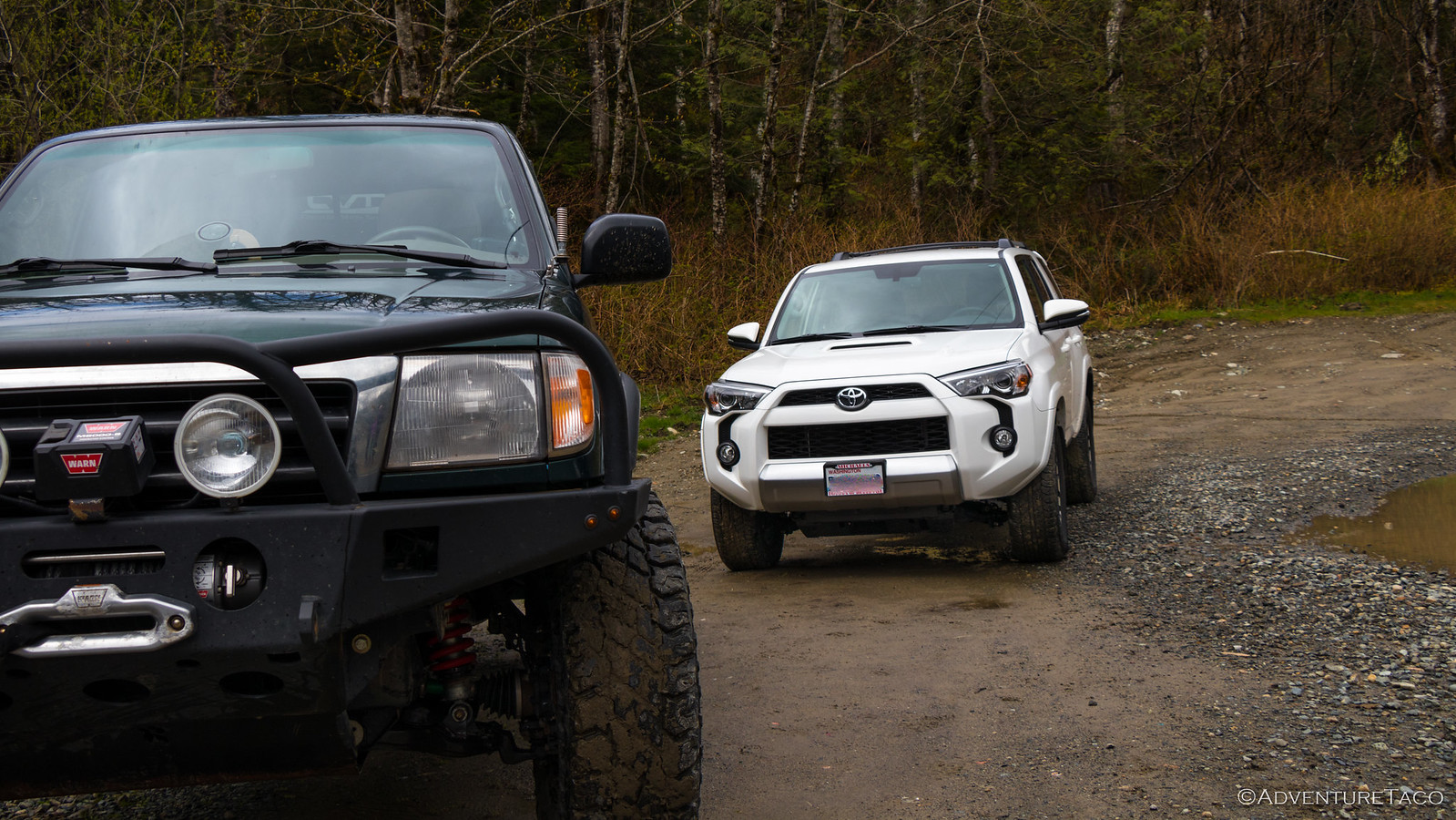 Then, it was time to air down. I handed over a tire pressure gauge and suggested that they air down from 32psi to something around 22-23psi, since they were running P265/70 R17 tires (that "P" standing for passenger-load rated vs. "LT" or light truck). We wanted them to have some give for comfort and flexibility over rocks, but letting out too much air would lower them even closer to the ground and get them riding on their thin sidewalls. 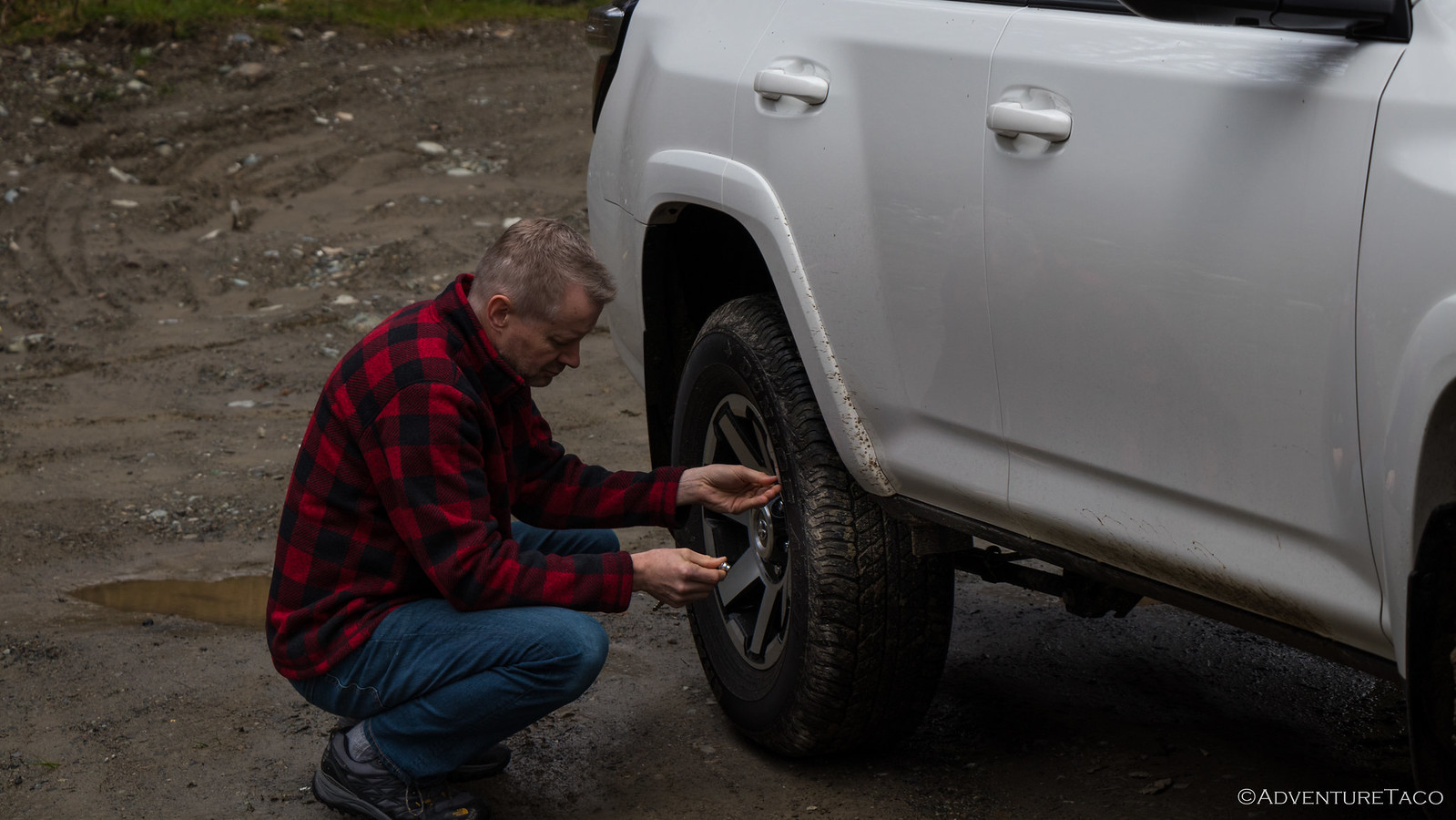 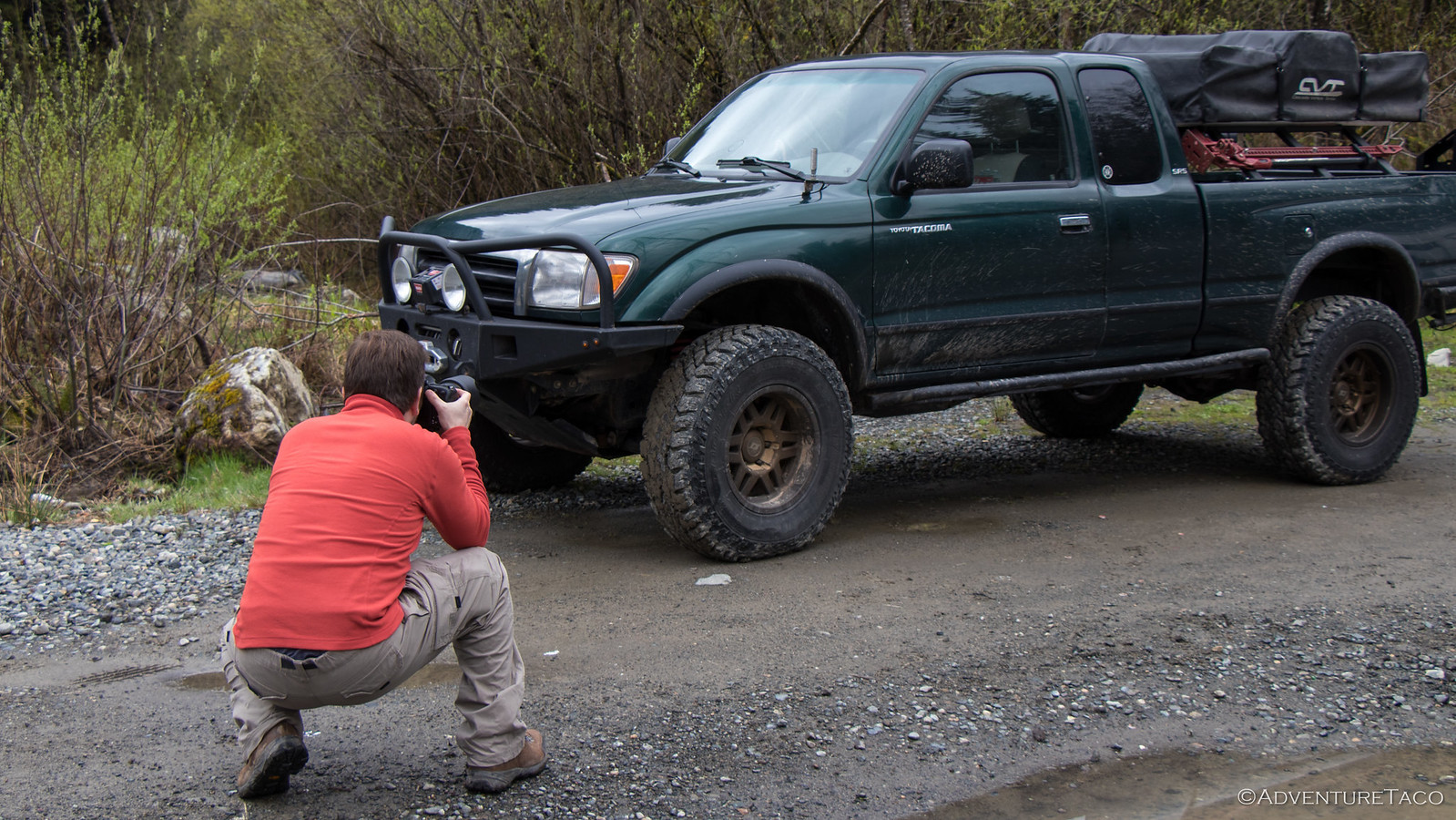 We'd rallied at a turnout with a couple big puddles, and figured this would be as good a spot as any to get the first bits of mud on the 4Runners. So @mini.turbodb climbed in the back of the Tacoma, and we dove right in. If you could see the smile on Joe's face here, you'd know he's hooked forever. 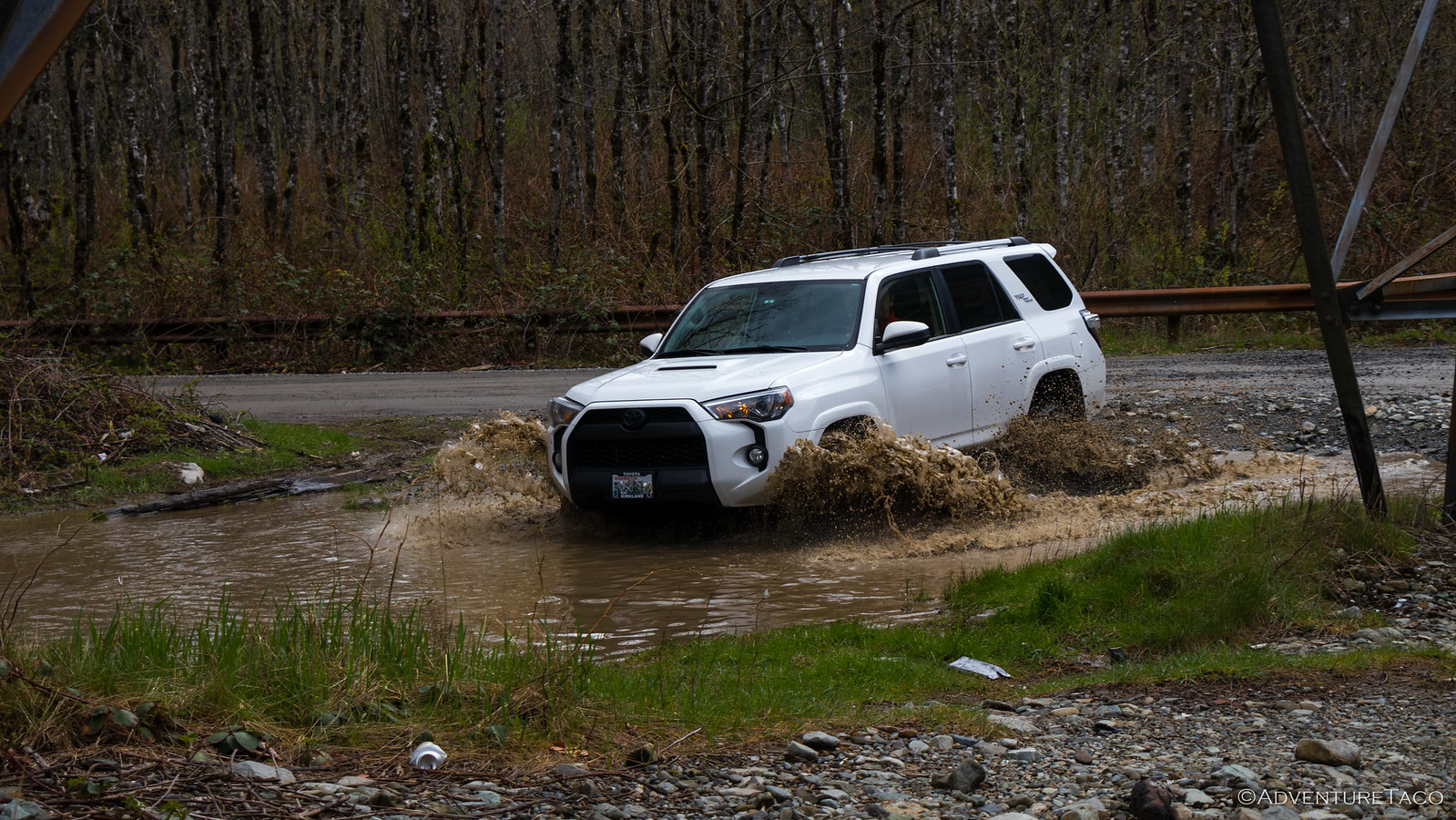 Then, we headed up the trail - potholey at first, then steep, and then steep and rocky. It was fun going - I'd leap up ahead and then jump out to snap some pics of Joe and Dave making their way up - big grins and a bit of fear apparent on their faces. 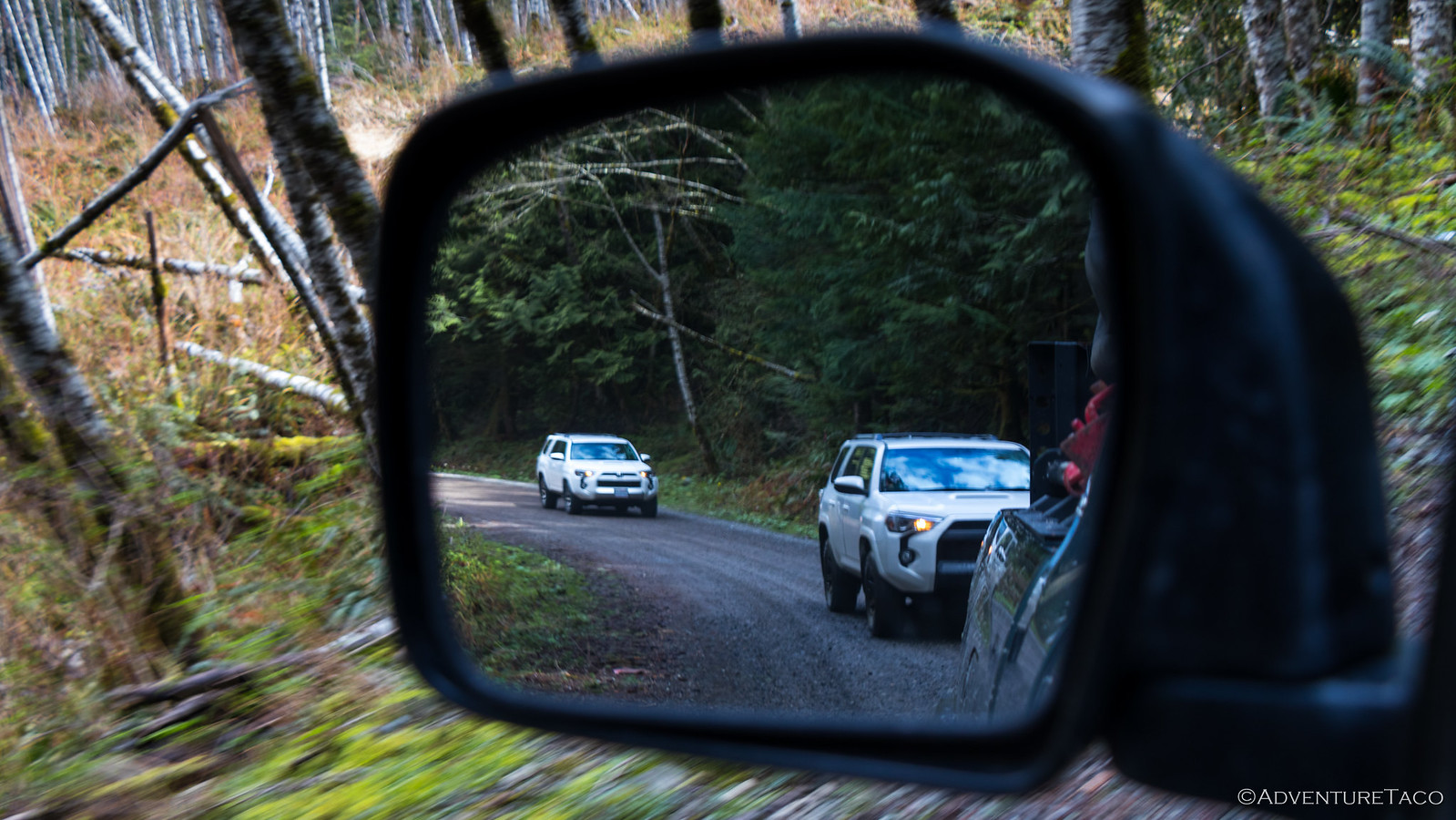 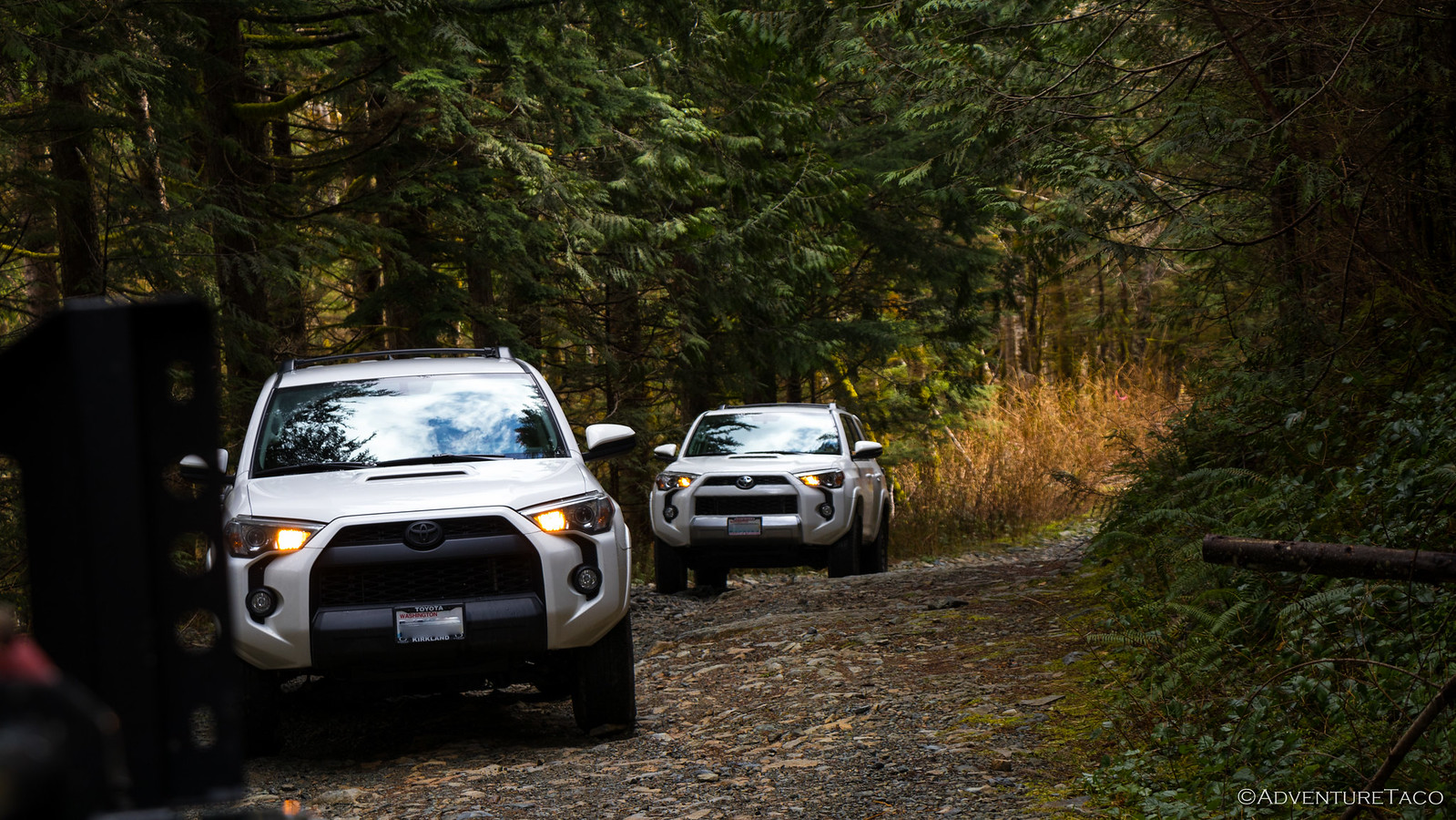 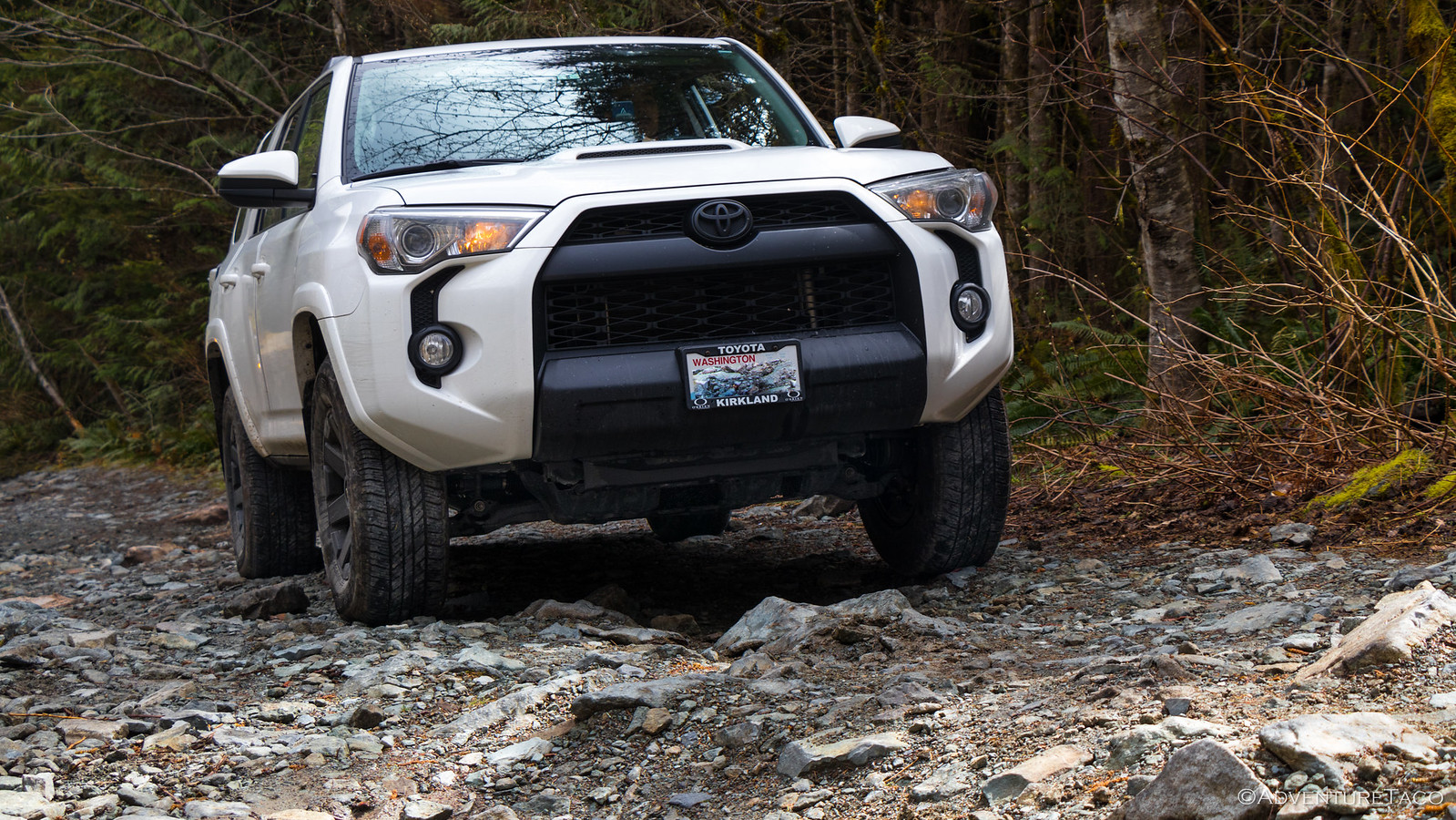 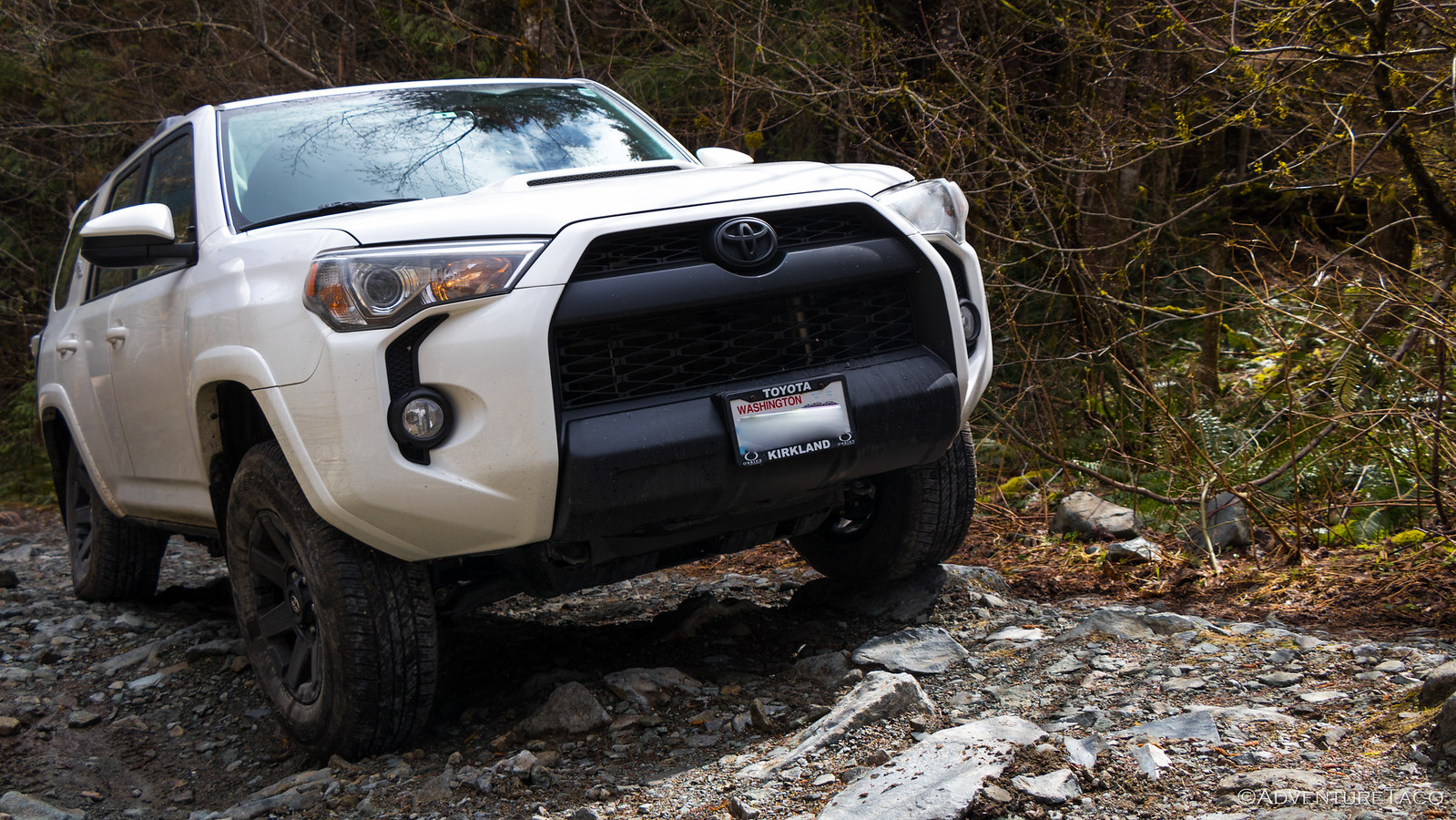 Of course, they'd both punched it into 4WD early on, and despite the tires these were still super-capable 4Runners, so there was never anything to worry about. I took the opportunity to teach them how to watch and listen to a spotter, as I directed them into the bumpier and more off-camber parts of the trail - still pretty tame, but you know, to give them a little excitement.

I think they loved it. 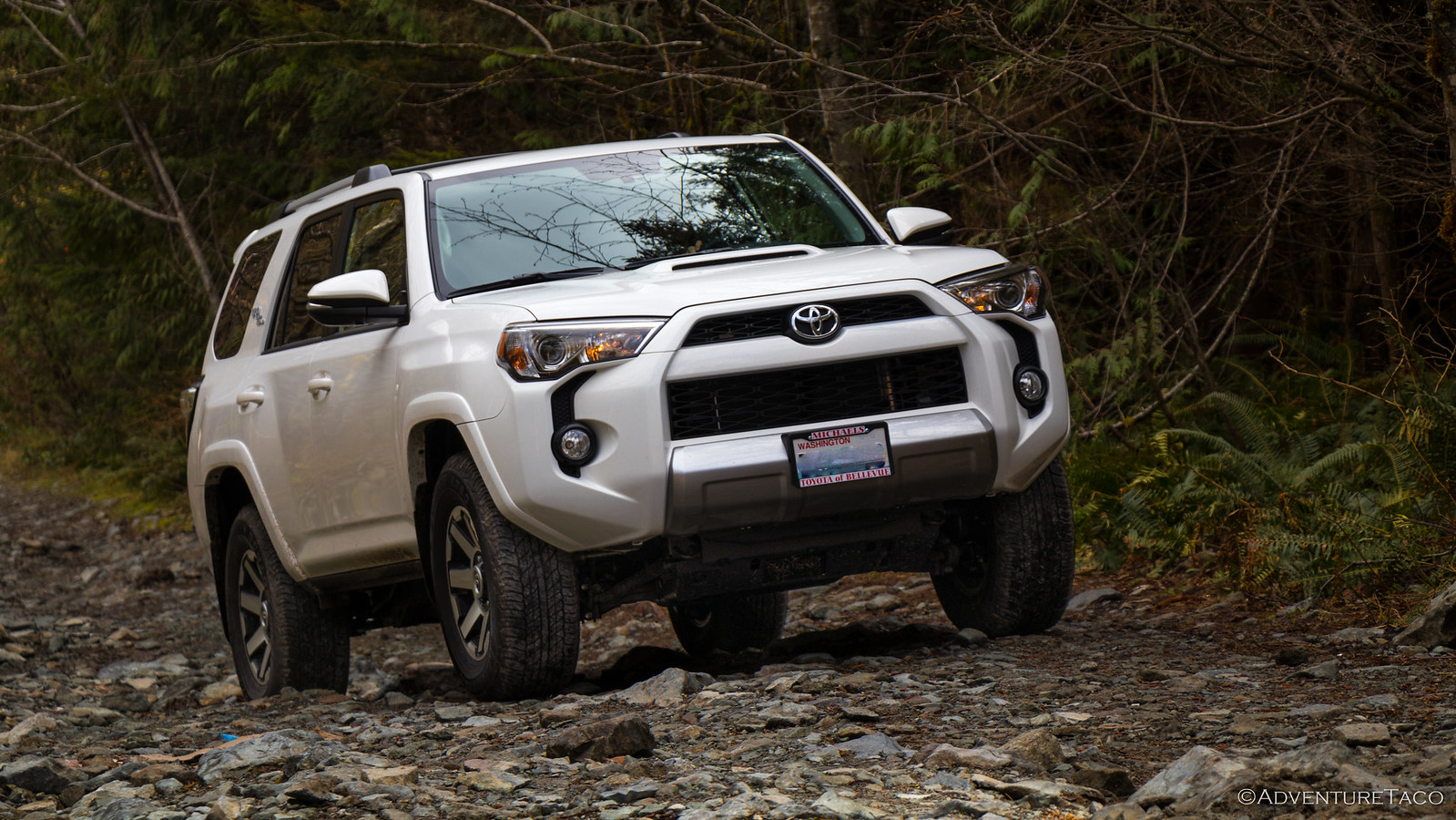 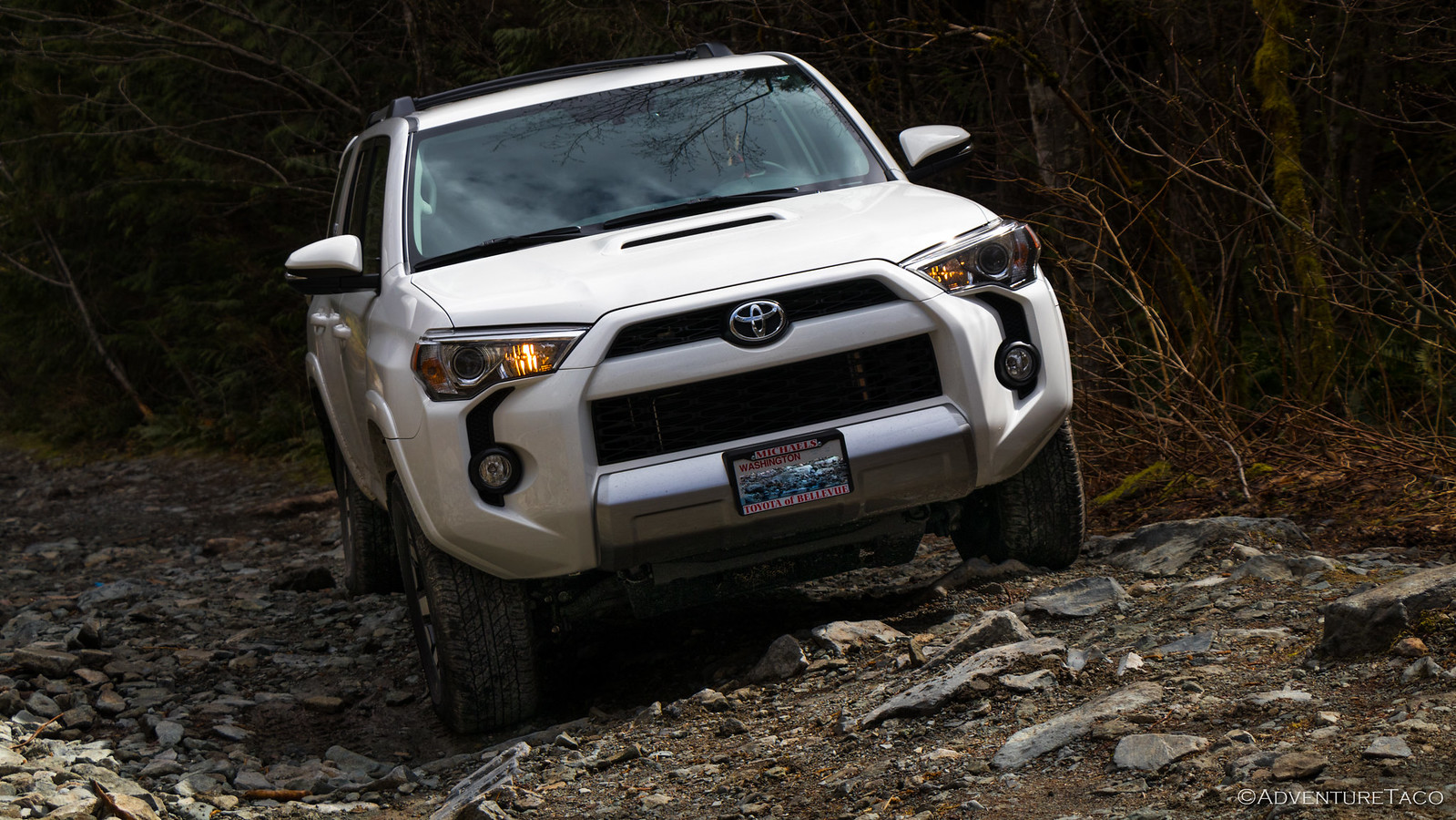 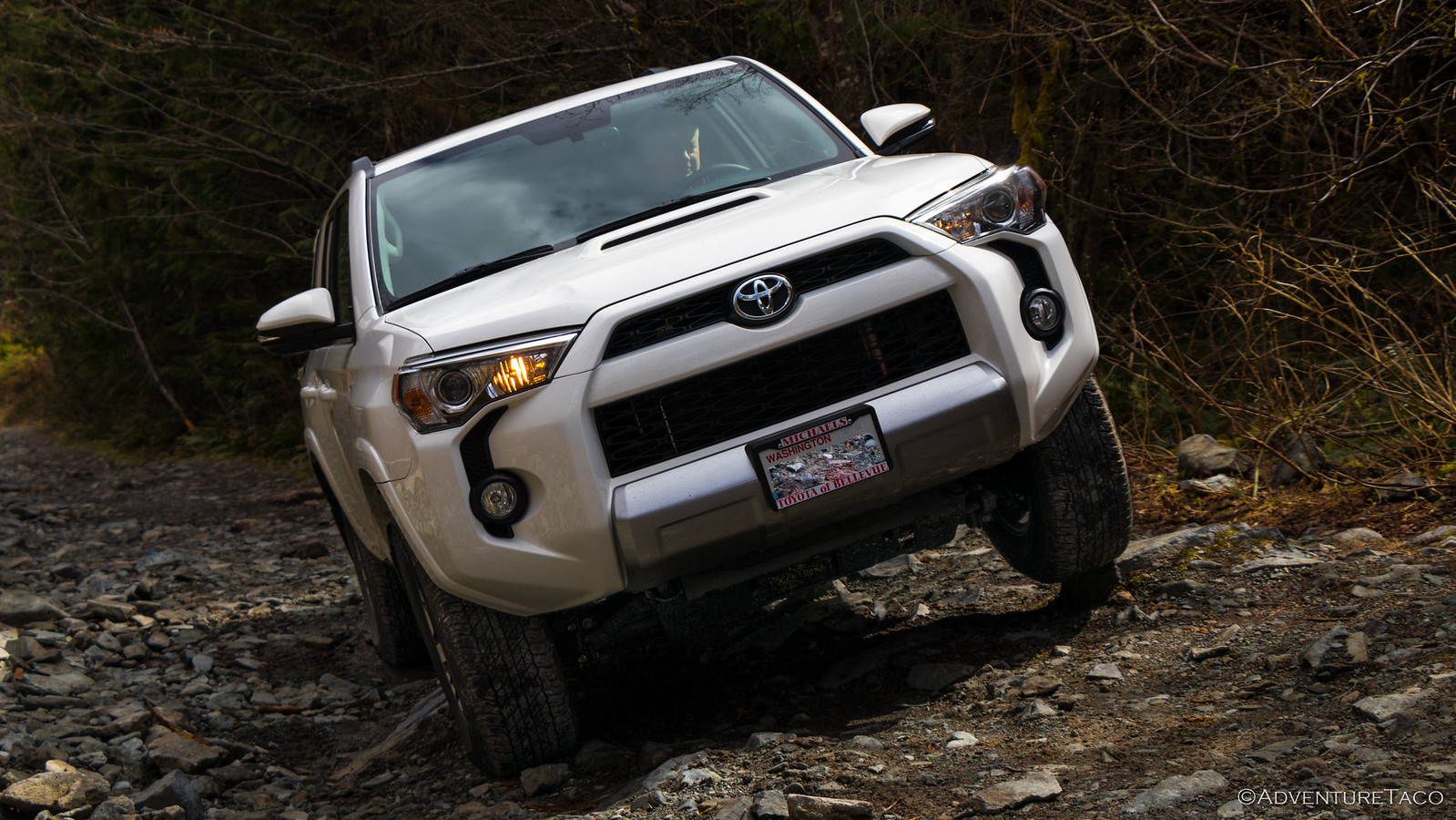 This whole time, @mini.turbodb was having a blast - perhaps the best time she's had offroading, ever. Riding in the back of the truck (generally standing between the cab and the tent) was exhilarating for her, and the nice weather, slow speeds, and easy trail made it the perfect time for that! And that made @mrs.turbodb happy, since she was of course worried to start. 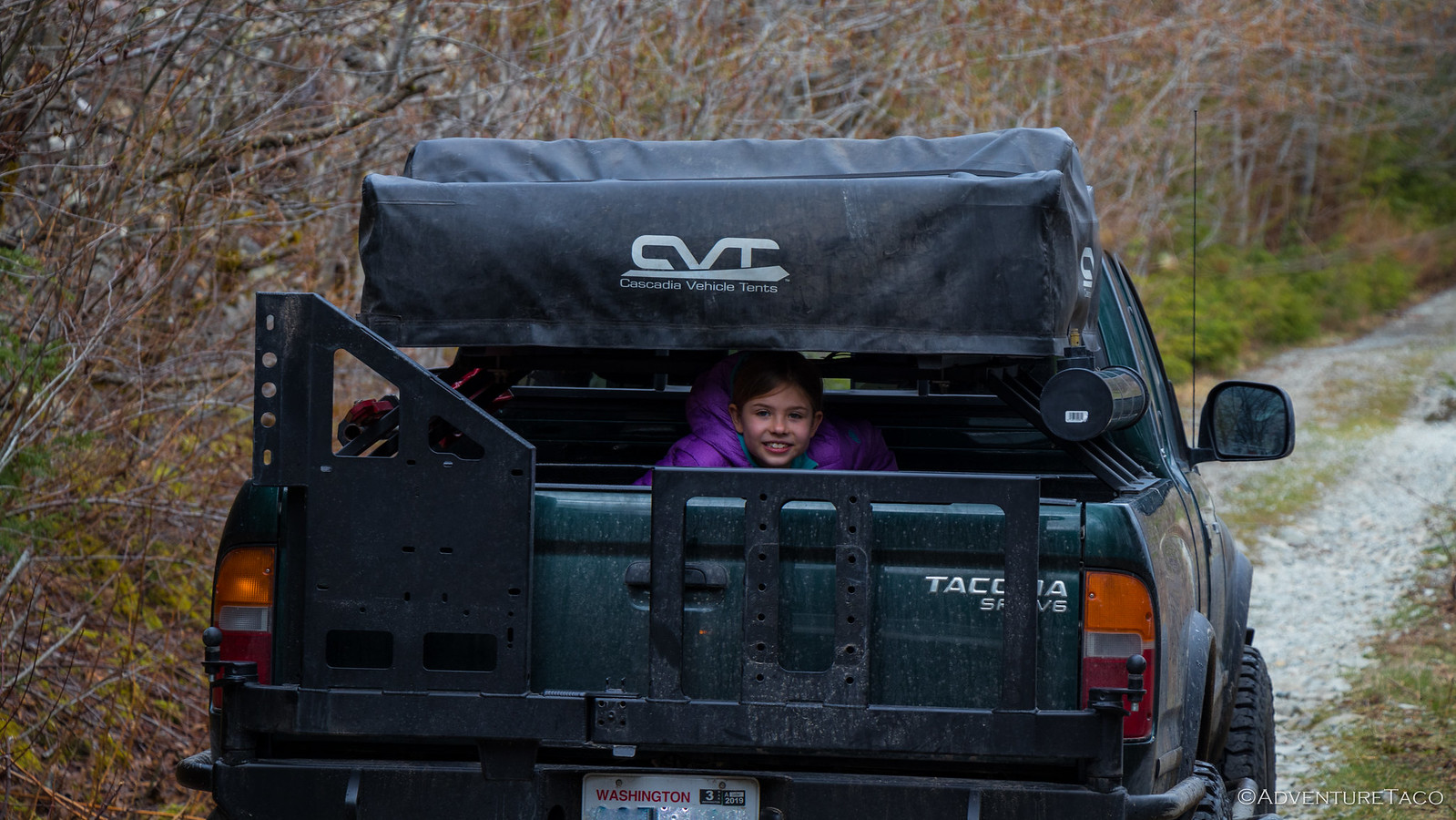 We continued making our way up the trail, passing through forest and over burms until we ultimately came to the Mine Creek crossing. The water was low, but the snow (which had been spotty to this point) picked up on the other side and was a foot deep in places. Not a problem for the Tacoma, and probably not an issue for the 4Runners, but with street tires and 8-inches of clearance, we decided that it was a good spot to call it for the first trip. 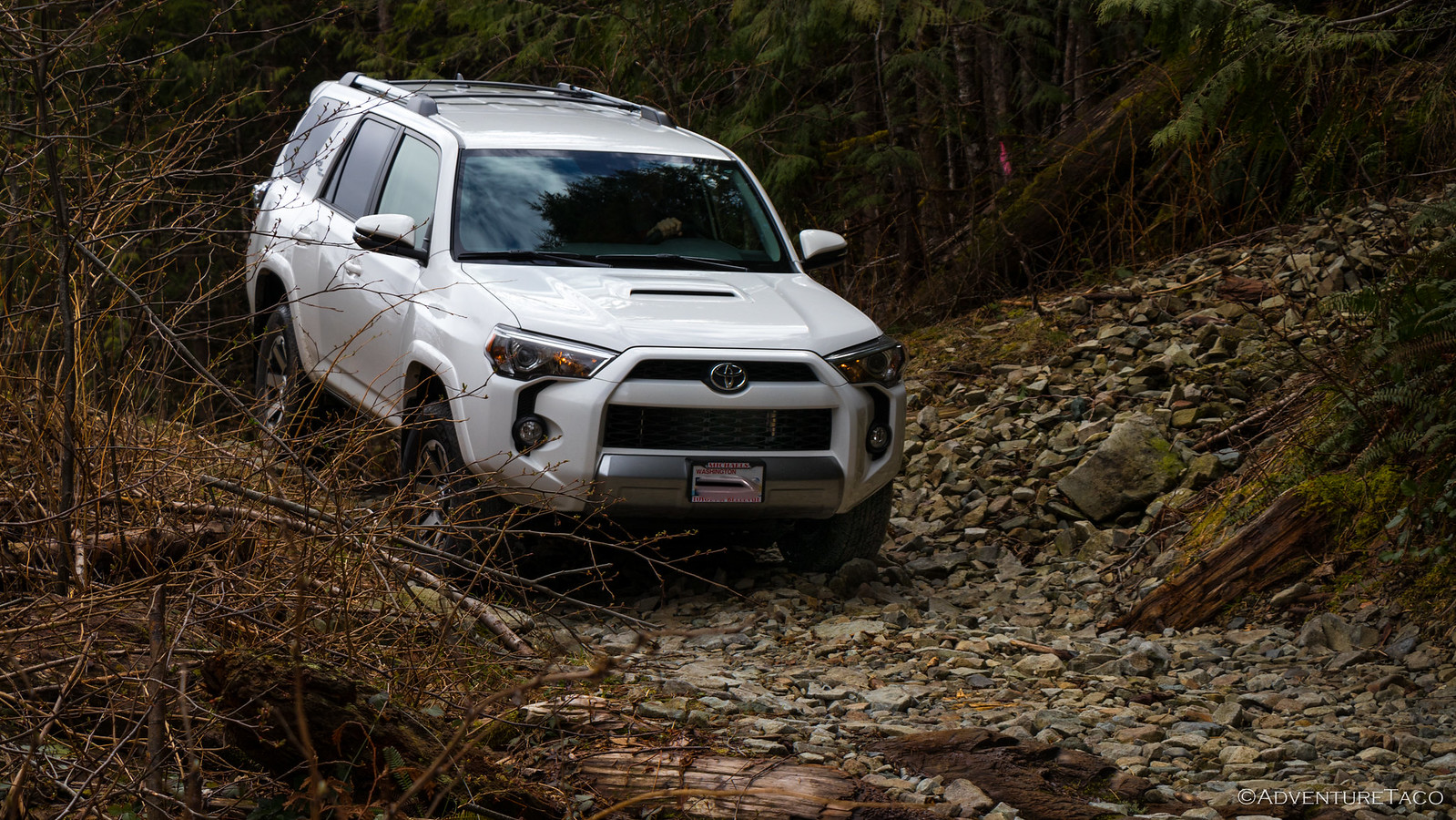 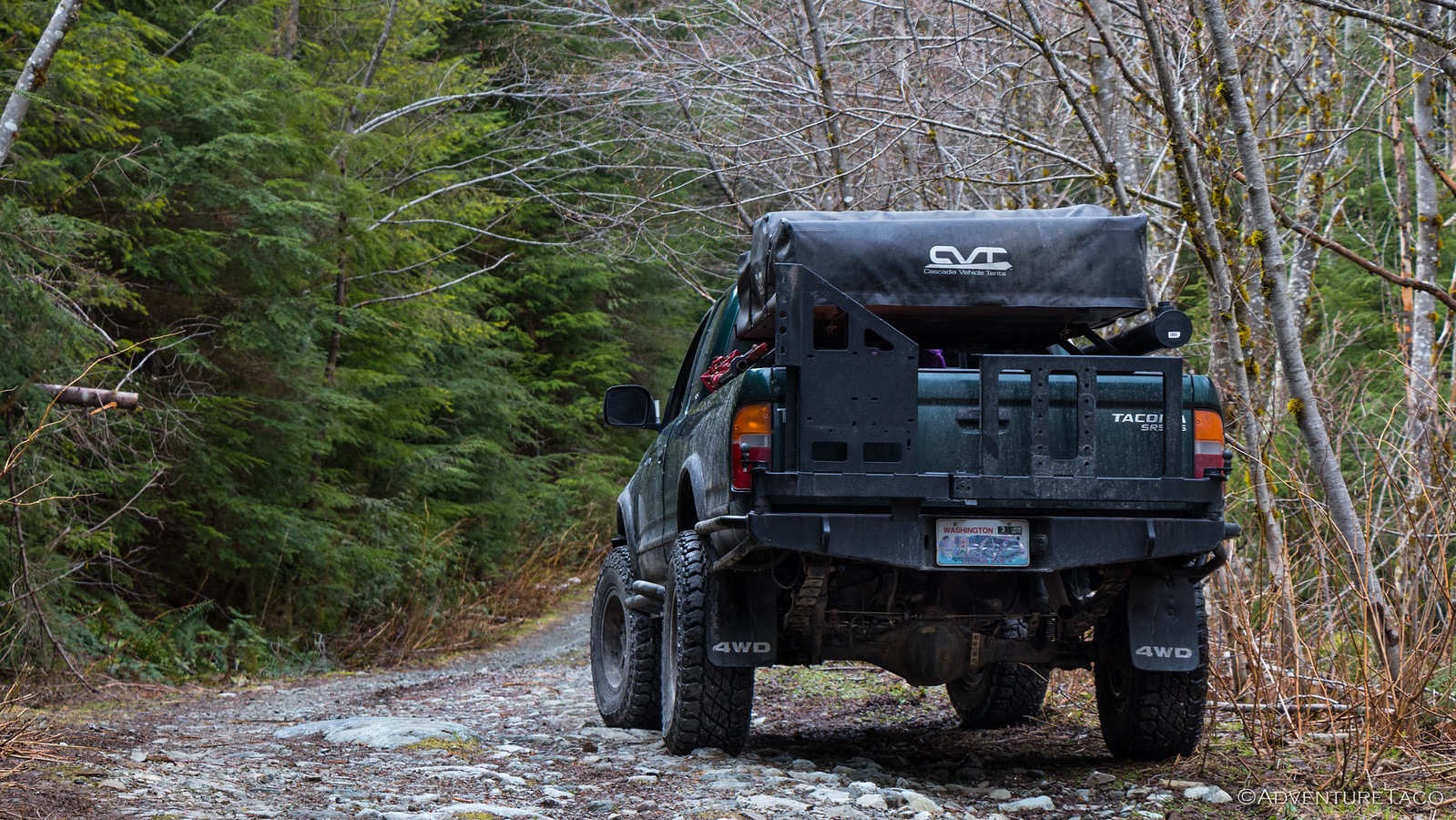 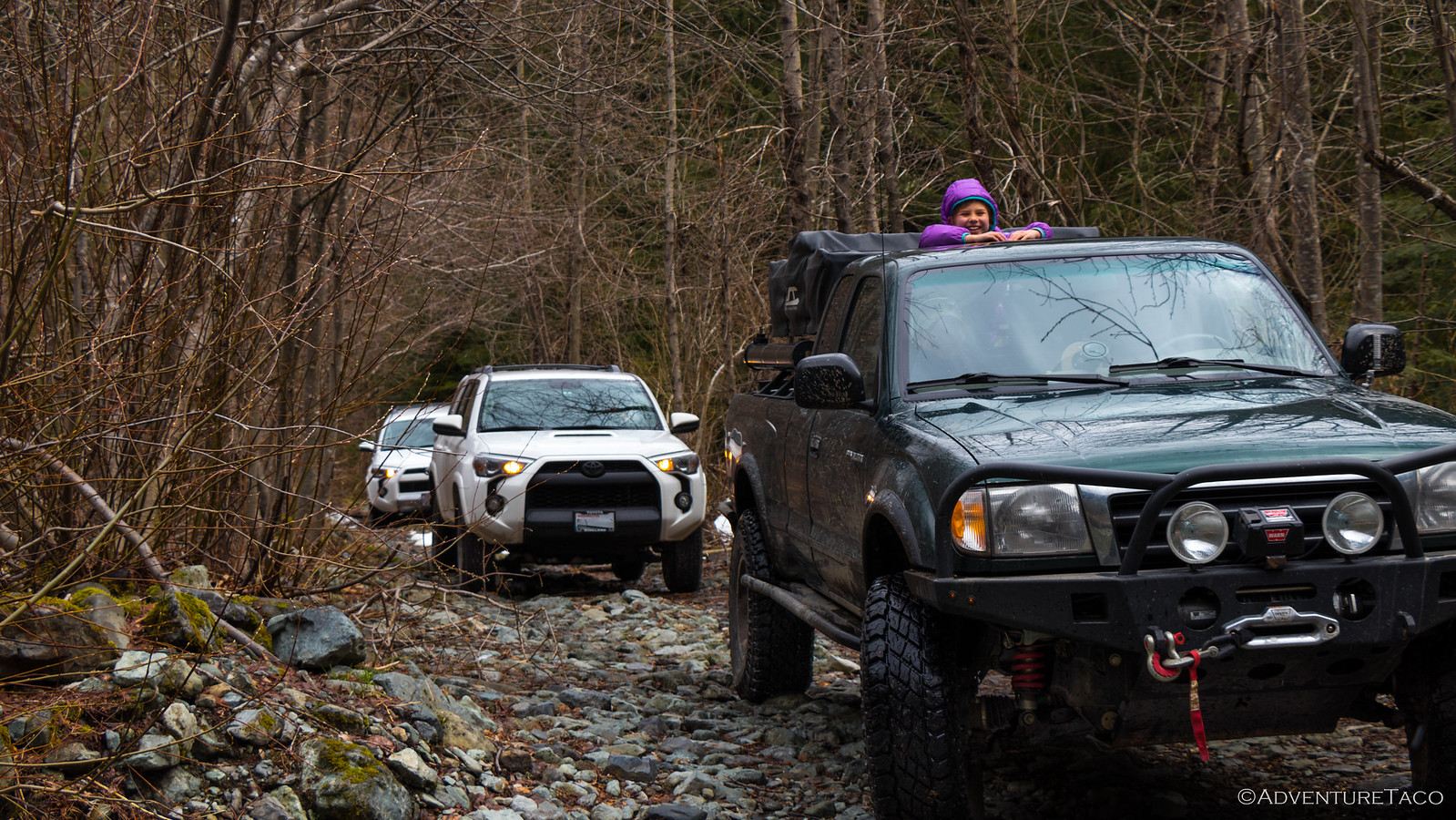 And then, from the other direction, we saw a Jeep and Tacoma headed down the road toward us. It was time to get out of the way. I pulled into and up the creek and Joe eased in after me. Dave backed into a shallow pull-out, and the Jeep and Tacoma made their way past. @mini.turbodb enjoyed it all immensely. 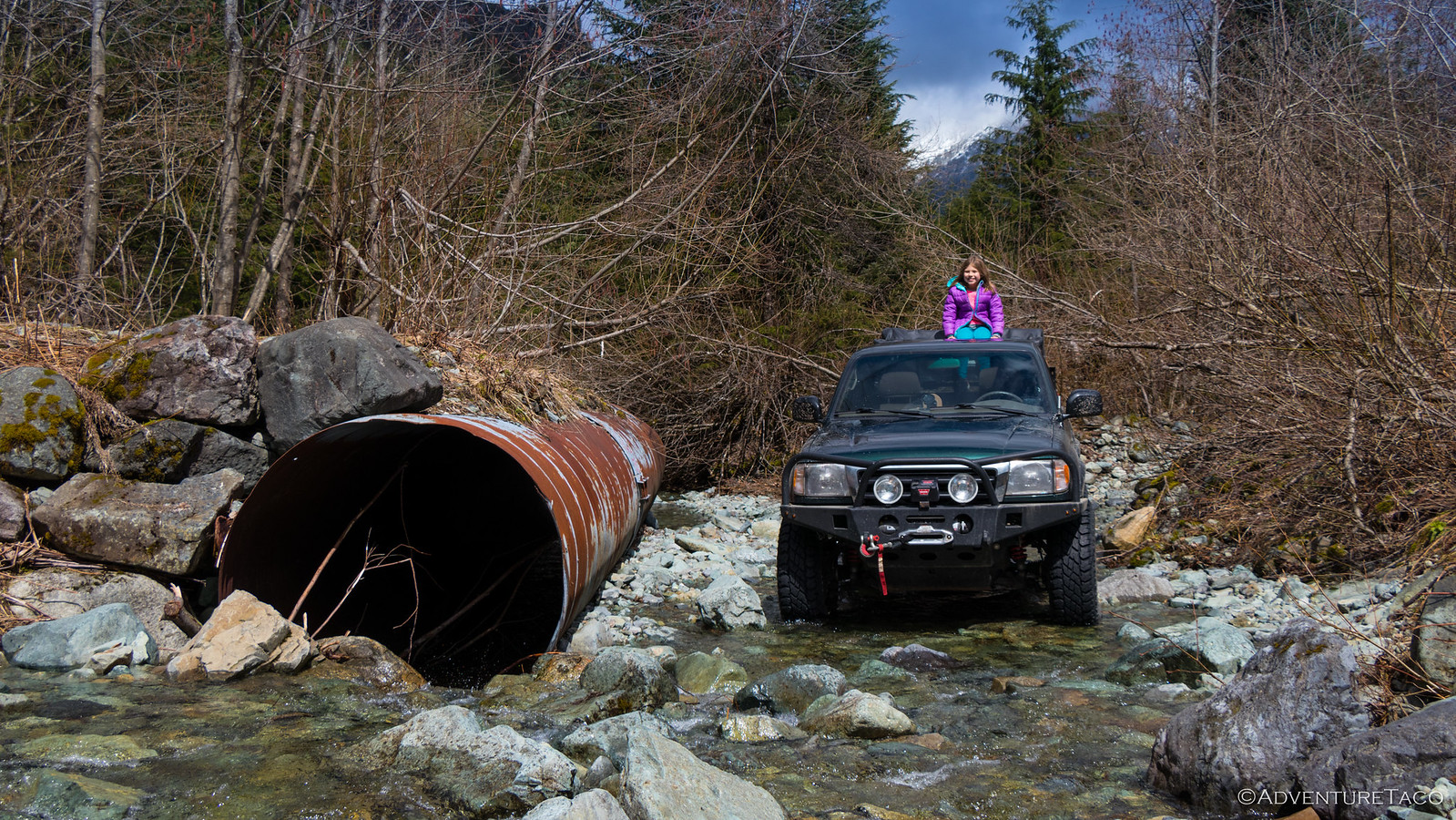 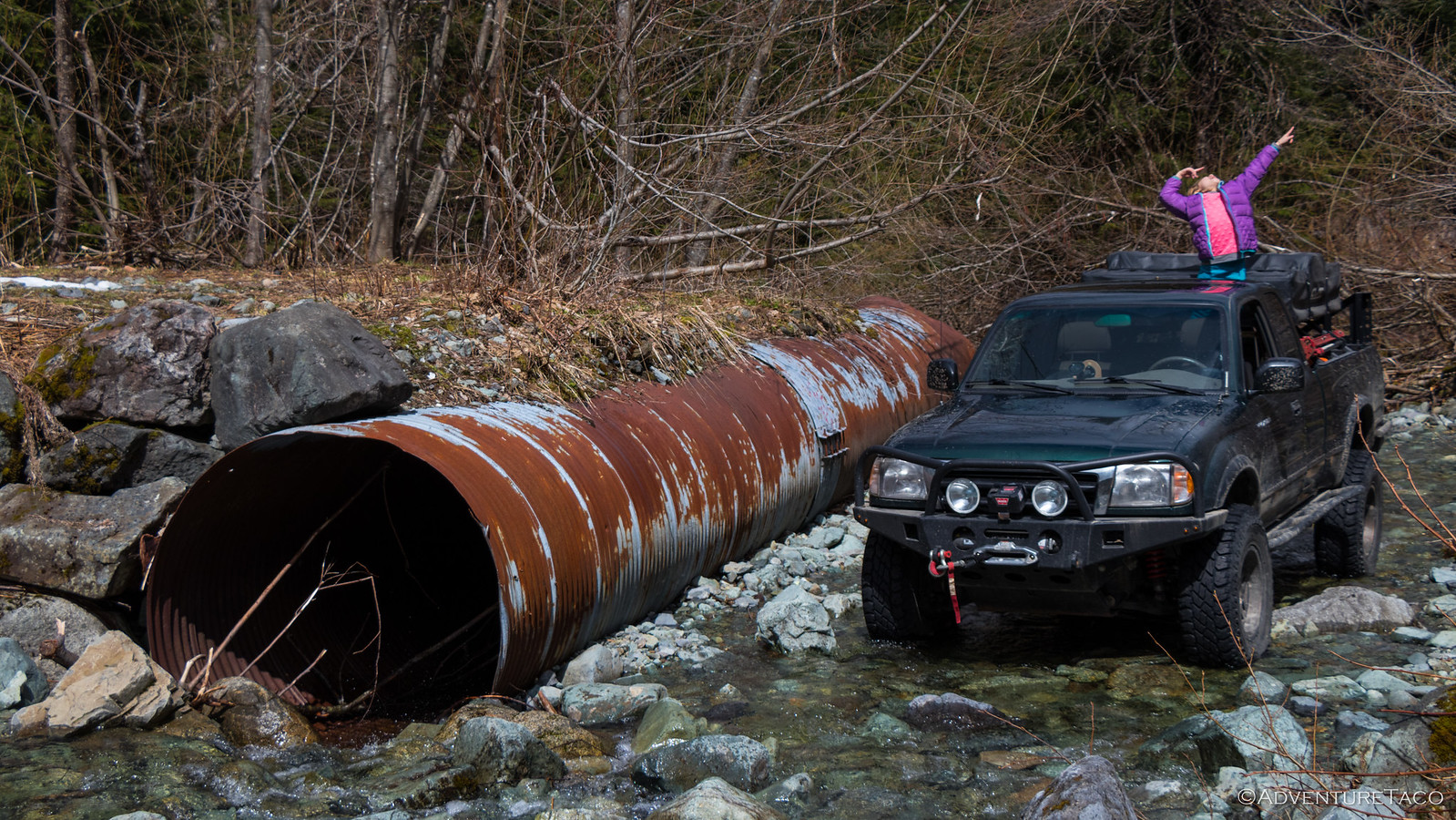 Then, we got everyone turned around (with some more spotting) and convinced Joe to give up the driver seat so that his wife Daisy could get some time behind the wheel. I dare say that Daisy may be the natural offroader of the family, as she smoothly navigated the terrain to the trailhead where we ate lunch and aired up Dave's tires, since he had to take off. As we did, Joe was already talking about the new tires they needed to get, Daisy was eyeing the sliders, "to make getting in the 4Runner easier," and I think Dave's probably purchased a compressor already! It was great fun all around. 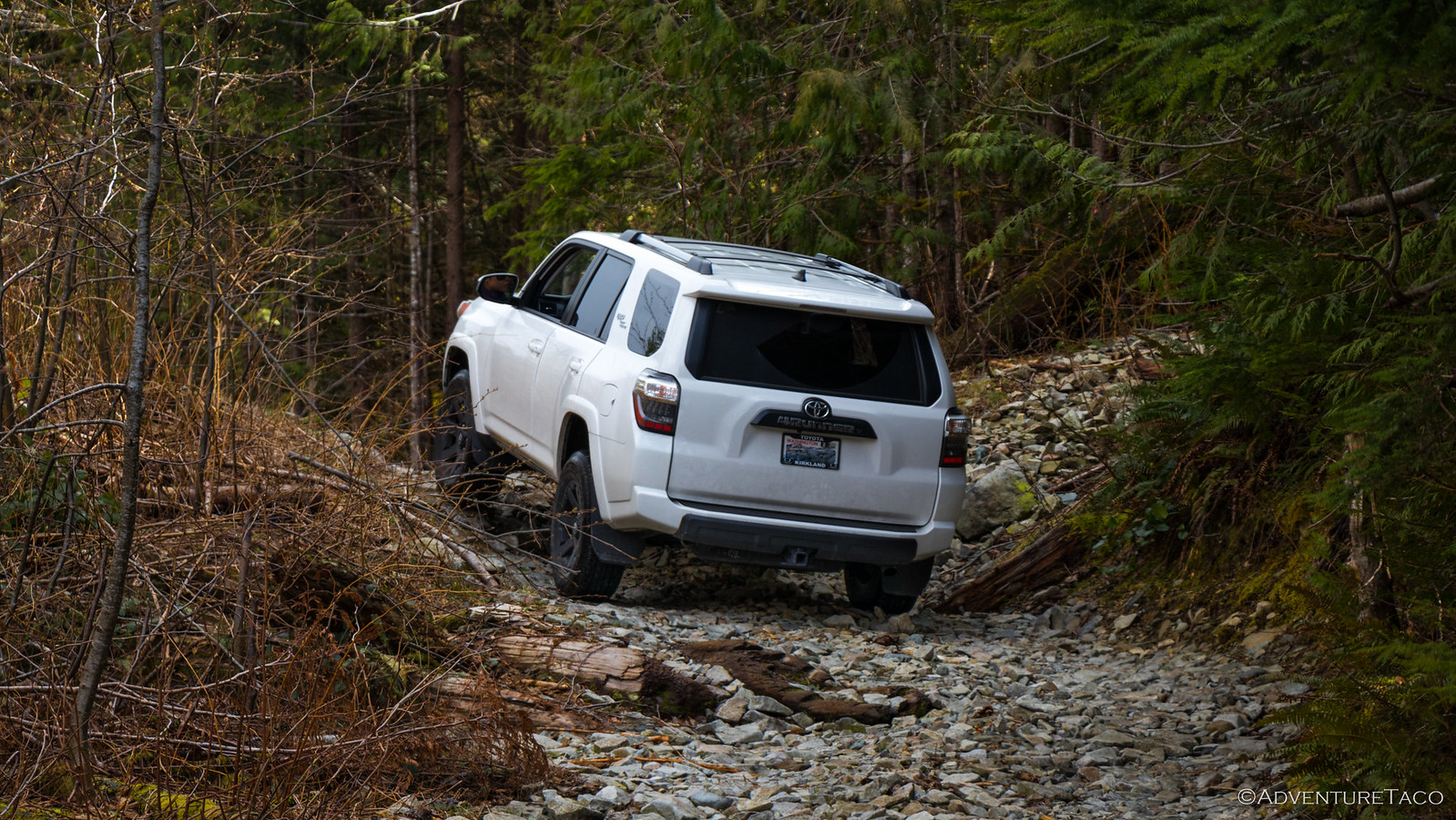 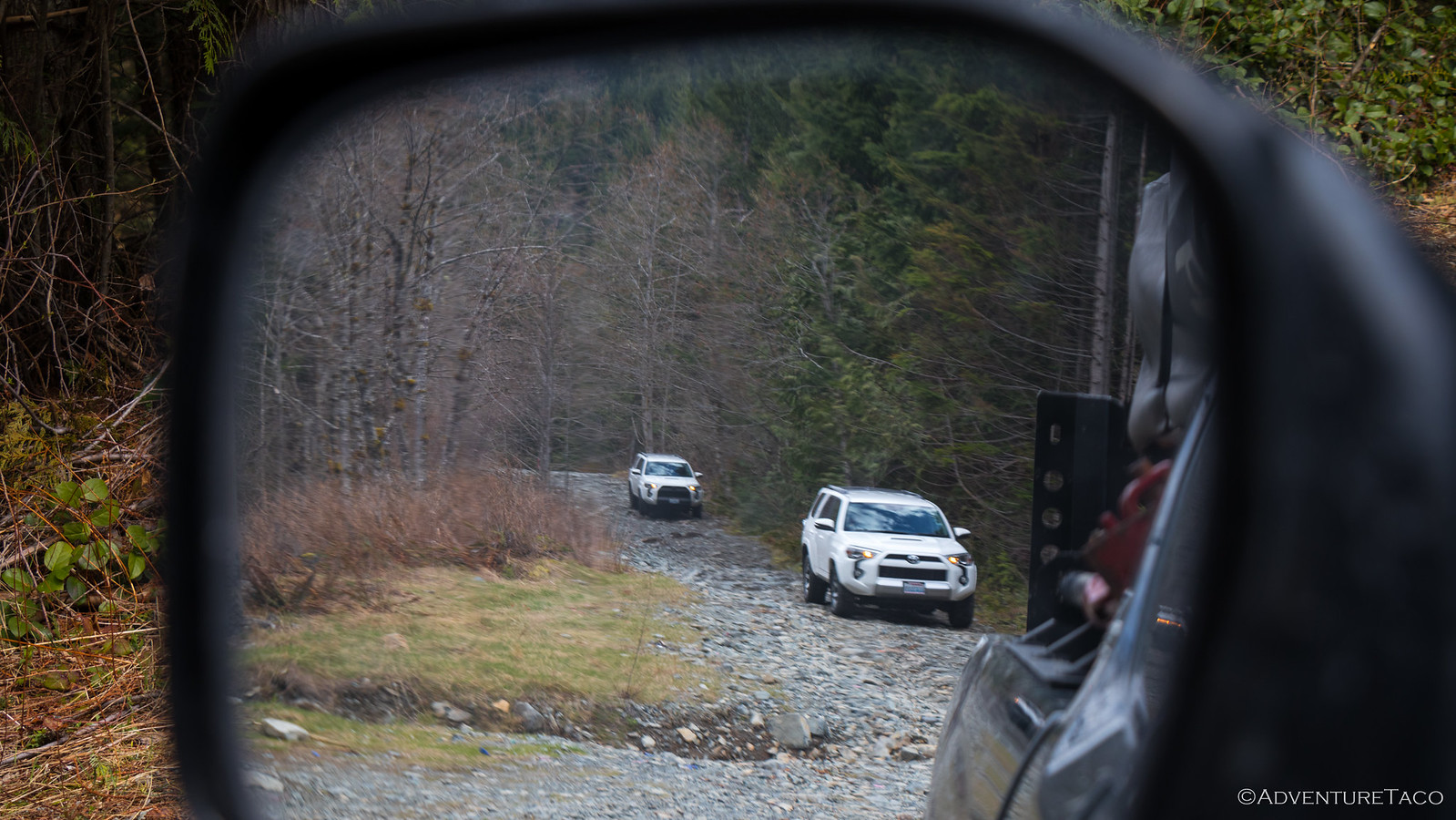 Eventually, Dave tore himself away and we continued as a caravan of two up another shoot of the same forest road. See, Joe wanted a shot of his truck on a rock - he'd mentioned it earlier in the day - and I knew that there was a good possibility that we'd find that (assuming we could get Joe through a bit of a technical climb).

We did. And he got his shots. 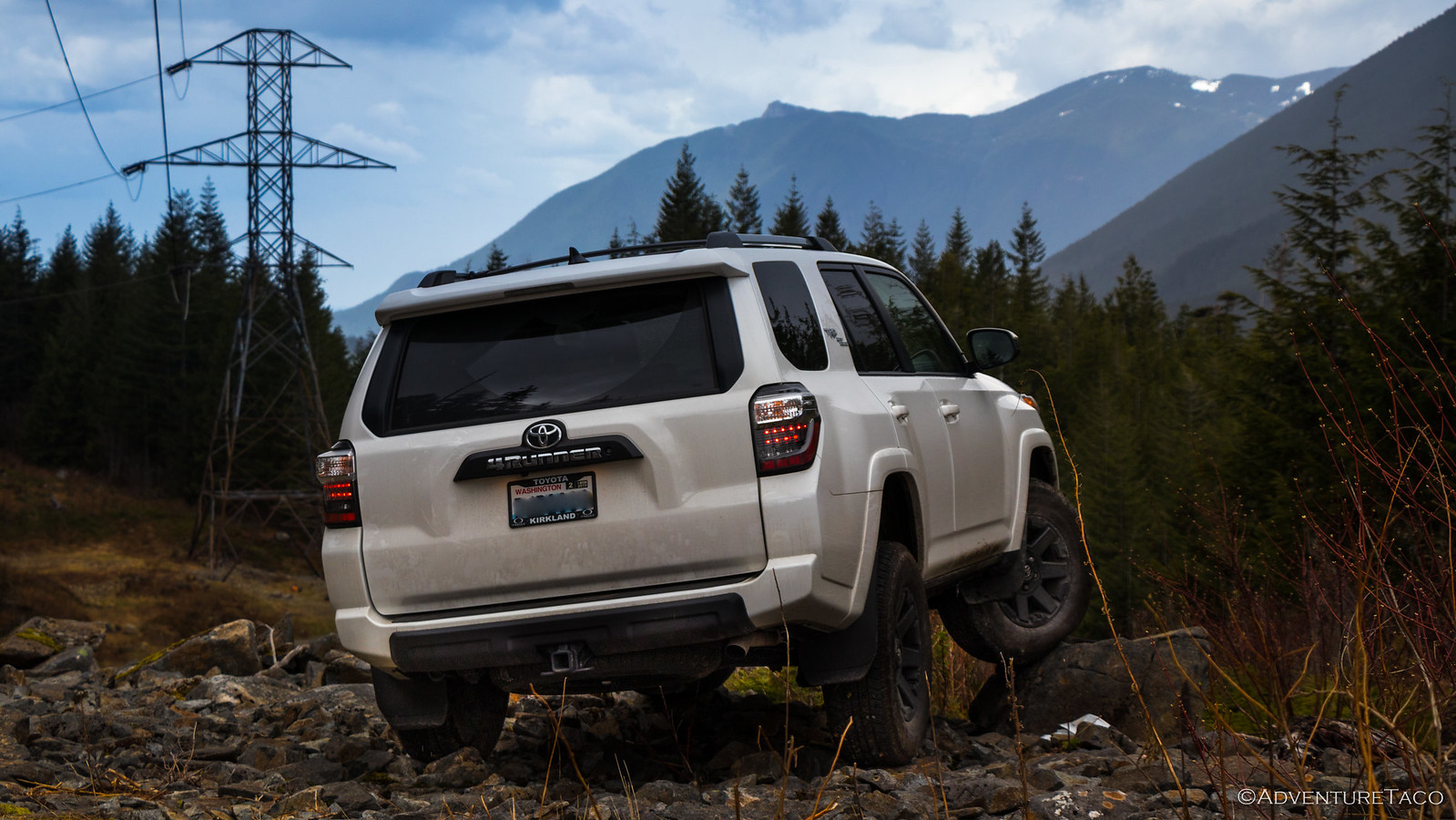 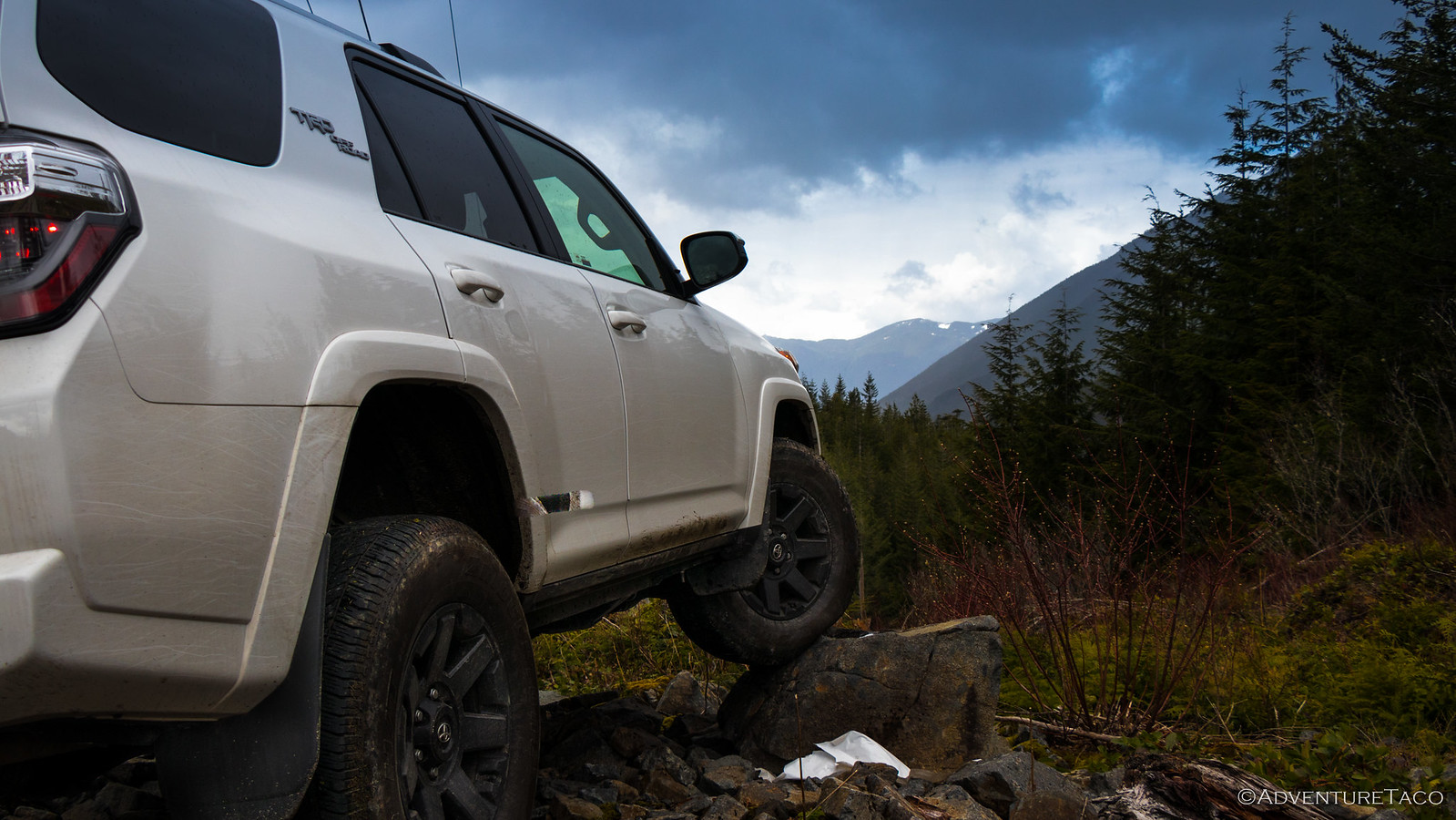 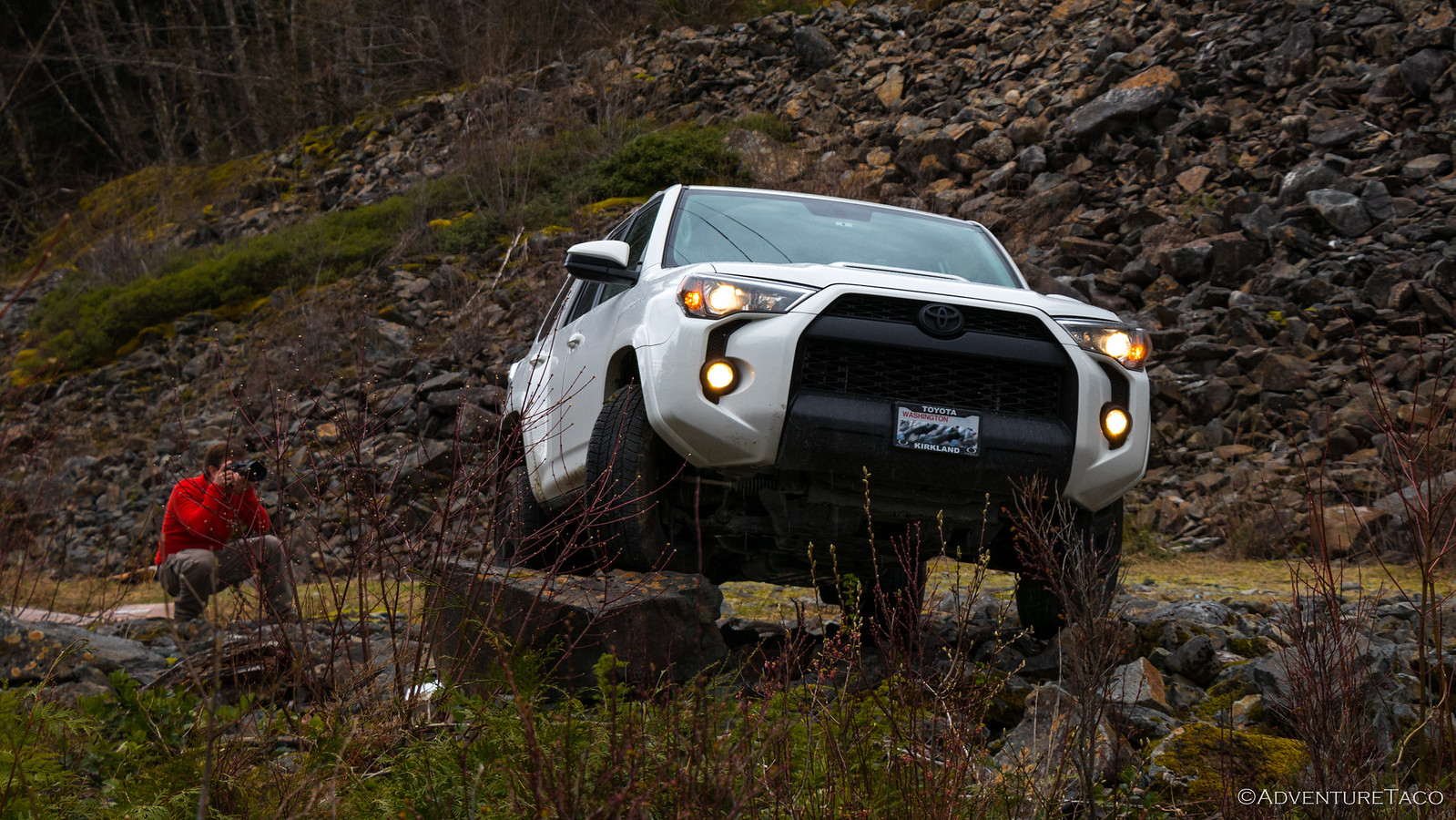 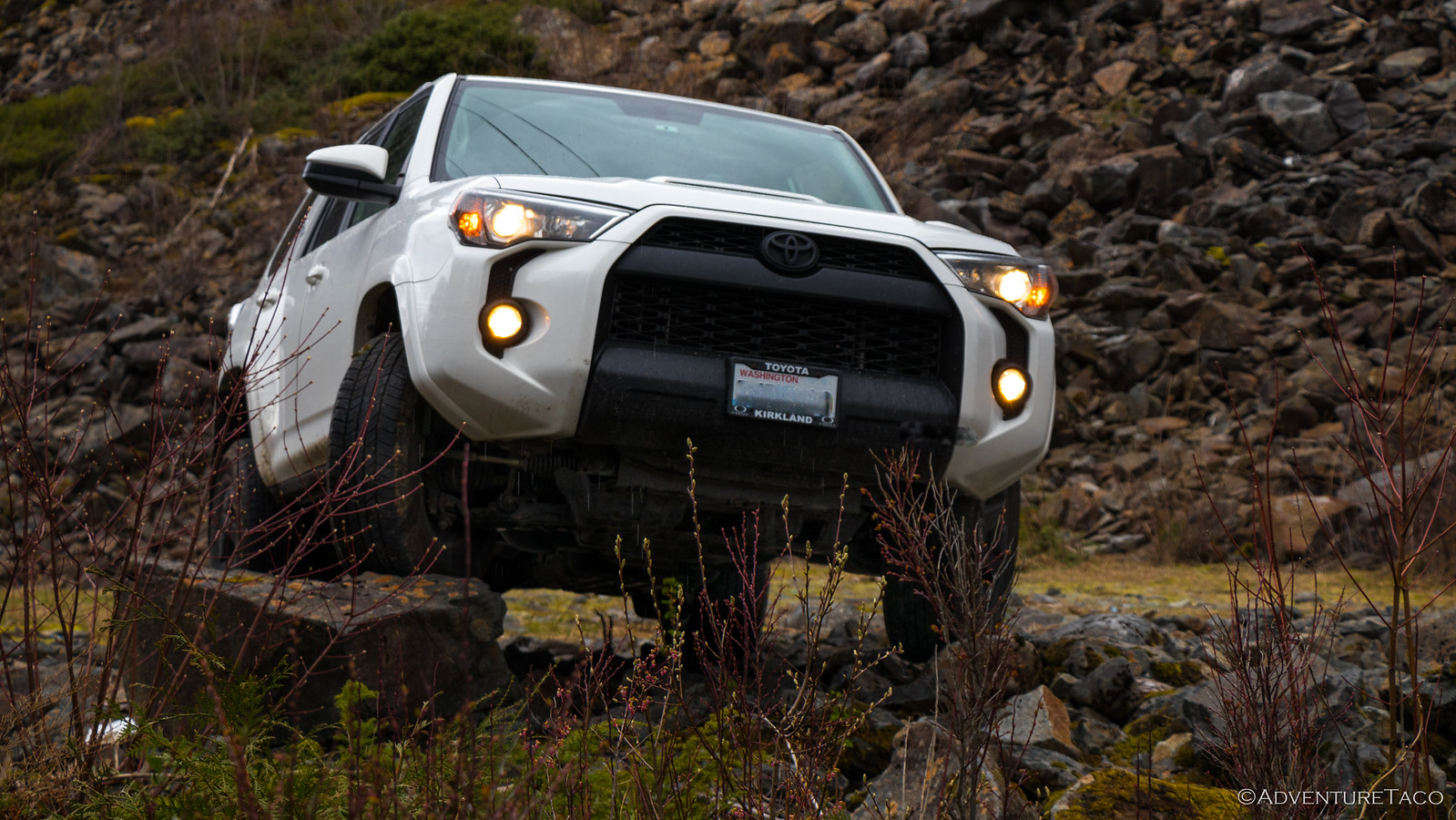 And Joe was a happy dude. 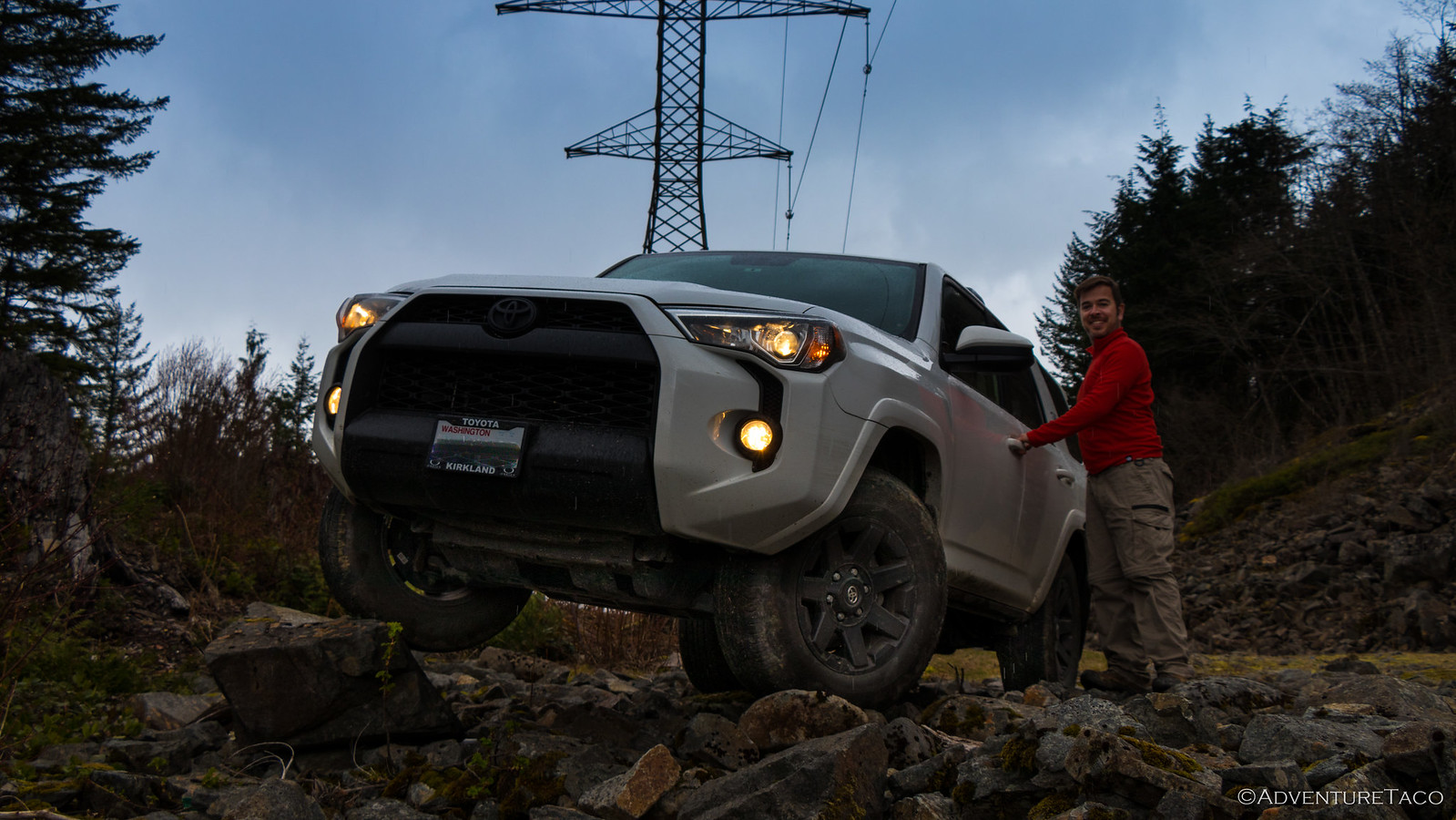 All that was left was making our way out - an easy affair now that the 4Runner was a bit more comfortable on dirt - and airing up. As we parted ways before hitting the highway, the talk was of our next outing - where, when, and how long? And, I've got no doubt - Daisy's 4Runner isn't going to stay stock for long. Joe and Daisy both have the bug.