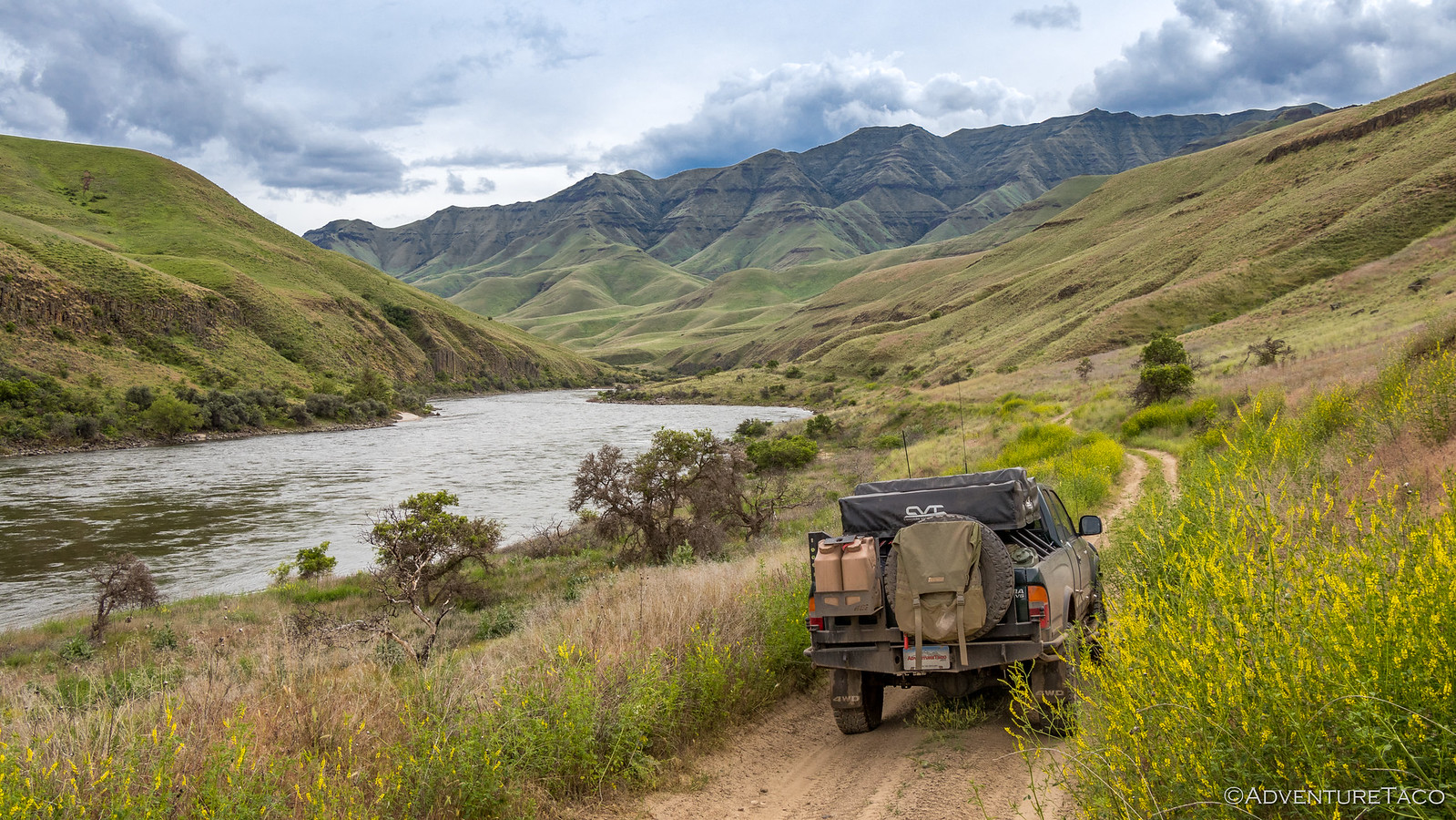 An astute reader may recall that we'd headed east a few days before Memorial Day - not just to explore Hells Canyon, but to meet up with Mike @Digiratus, Monte @Blackdawg, and Devin @MissBlackdawg. At least, those were the folks we knew; we were also rendezvousing with @BabyTaco Gage and his wife, and a couple of their friends - long overdue if you ask me.

From our current location at Hells Canyon Dam, it was some 5 hours north to Lewiston, ID, where we'd all planned to meet for lunch, so we were up early - for sunrise if it'd been sunny and we'd been able to see the horizon - to eat a quick breakfast and do our best to dry off the tent from the torrential downpour the night before. 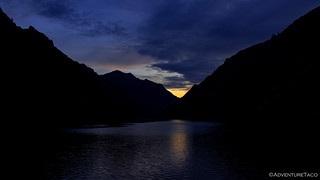 We were on the road just before 6:00am, the skies clearing above us as we headed south - away from our destination - the 25 mile road to Hells Canyon Dam an in-and-out affair. That was fine by us - the sun streaming under the clouds illuminated the green hills, making the drive a pleasant one. 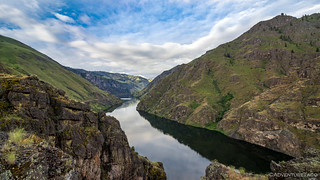 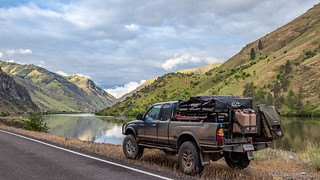 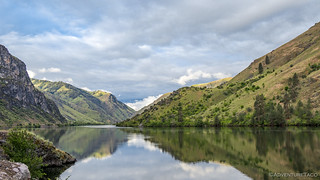 At Oxbow, we had a decision to make as to our route - we could retrace our steps west and north through Joseph, OR, or we could head further south, to an eastern route that would take us north through Idaho on highway 95. Having not been the Idaho route previously, we opted for that option - a nice side effect being that we could check out both the Oxbow and Brownlee Dams - two more of Idaho Power's controversial workhorses along the Snake River.

Controversial because as the dams were being built, there was a struggle between the power company and US Fish and Wildlife around the transmission of spawning salmon upstream and small fry downstream around the dams - or at least, around the Oxbow Dam, the first to be built. Prior to its construction, the Snake River system was the worlds second largest producer of Chinook and steelhead, second only to Canada's Fraser River, with over 200,000 three- to four-foot long fish migrating up the river each year (and several million fingerlings migrating back down). Now, one may immediately think - "I know - a fish ladder!" - which would be a reasonable solution, but Idaho Power felt that was too expensive an option despite the fact that such a large percentage of the entire salmon population used this passageway to spawn, and instead opted for a trap system that would allow them to truck fish in both directions around the dam. This trap however, failed spectacularly - putting the entire structure of the dam in jeopardy - and after numerous attempts to fix the system, they gave up, effectively cutting off the Snake River above Oxbow - and eventually Hells Canyon Dam - from Chinook and steelhead spawning. 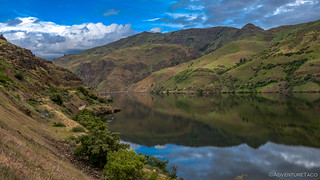 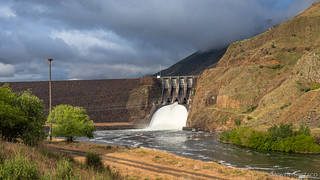 Beyond the dams, we turned north for a reasonably uneventful drive to Lewiston, through periods of rain so heavy we couldn't see more than 50' in front of us, and through fields of flowering canola so yellow they appeared to be painted. And, right on time, we pulled into our rendezvous point - KC Burgers - in the metropolis of Lewiston. We were the last to arrive. 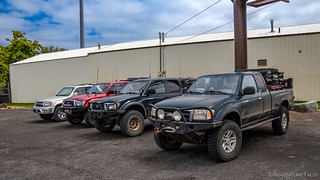 That's right, even Monte and Devin - notoriously late - had beaten us, a late drive the night before, and the one-hour time difference working in their favor. But no matter, we were together - at least for now - and enjoyed our burgers (though, I would try a different place next time - they were nothing special at KC in my opinion, and the service was meh).

Lunch behind us, we discussed our next steps. Monte wanted to top of his fuel tank, we wanted to restock a bit at the grocery store, and Gage needed to swap vehicles. No problem we thought - we had the GPS track that Monte had created, and ham radios + APRS for locating each other - so we split up and agreed to meet on the mountain - likely somewhere on the trail to Eagle Creek, and camp.

@mrs.turbodb and I - figuring that our detour would take the longest - provisioned as quickly as we could at the store and then pointed the truck towards Craig Mountain. We were likely 20-30 minutes behind everyone else, but we could see their APRS beacons heading out of town and so didn't give it a second thought.

As we hit dirt, I wondered if the rest of the group had decided to air down - the road wasn't bad, but it's always a bit nicer to have those cushion-y pillows of air to make it easier on the rest of the suspension (and our bodies). Regardless, we pushed on - no more APRS beacons on the map, in an attempt to catch up.

Maintaining a good clip, it wasn't long before we came to the turn for Eagle Creek - an offshoot from the main road; a road where airing down was a necessity. So, that's what we did - after all, this wouldn't cost us any more time than it'd cost the rest of the gang. 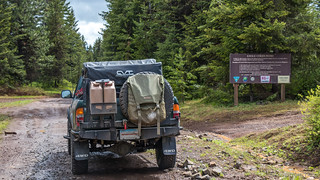 Aired down, we bombed down Eagle Creek road trying to catch up. Every few minutes I'd try the ham radio to see if we could raise Mike or Monte - each time without success. And there were no APRS beacons - due to the mountainous terrain we assumed. But at our speed, we were sure that we'd catch them. Sure of it.

Especially since we stopped only once for a quick photo; a feat that I've never accomplished when paired with Monte. 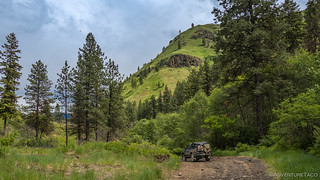 After paralleling the road for about 12 miles, Eagle Creek drains into the Salmon River - and we found ourselves at this point after passing several ATVs, UTVs, and dirt bikes, but without running into the rest of our group. Had we gone the wrong way? We were sure we hadn't - we were after-all, on the track.

We took a few minutes here to try the ham radio again and snap a few photos - an old chimney in the middle of nowhere, and the calm - at this point - but full Salmon River floating by. "I'm sure that they're camped somewhere down by the river." I said to @mrs.turbodb. 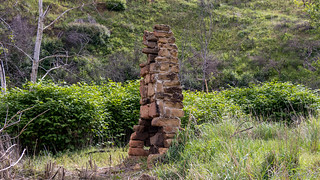 So, off we went again, our speed high - the ADS suspension  getting a good workout, and performing flawlessly - the ride in the front much nicer after I'd removed some of the pre-load. It wouldn't be long now until we found them - we hoped! For another 8 miles or so, the road paralleled the Salmon River. The weather was warm - 80°F or so - and the beaches on its banks looked like inviting camp spots. But still, no group. 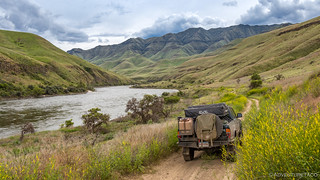 Finally, having traveled some 20+ miles at speeds that surely would have caught us up, we decided it was time to turn back - we must have misheard where we were going to meet - they must have told us to meet them on the other track Monte had created, and so we decided it was time to give that one a try. A u-turn in the road where it turned away from the river, and we headed back at a reasonable speed - there was no need to rush now. 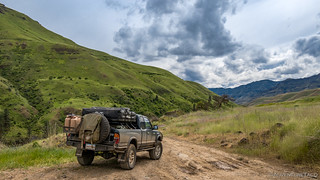 By this time, it was 4:30pm in the afternoon and we found ourselves wondering what we'd do if we didn't find the crew along the other track - would we come back down to the river where it was super nice? Start our trip home early and head west? We didn't know, and suddenly as we turned off the Salmon and back onto Eagle Creek Road, it didn't matter - because over the ham radio we heard:

@turbodb this is @Blackdawg, you out there? Can you hear me?

"Got you loud and clear." I replied as we raced up the road. "So glad we found you guys!" replied Monte, "I figured we better come looking since we said we were going this way."

Well, needless to say, it was a relief to know that we'd been going the correct direction - as opposed to going senile - and before long we met up with Monte and Devin who were in the process of making their way down Eagle Creek Road. 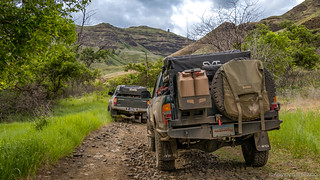 Turns out that there'd been another camp site that Mike planned on staying at and it wasn't on either of the tracks that Monte had created. As they'd headed that way, a discussion ensued as to whether we'd be able to find them, and it was concluded that with ham radio and APRS, things would be just fine.

And that boys and girls is a good example of why ham radios and APRS are not the end-all-be-all in communications. They are - for sure - much better than shorter range comms like CB, but in mountainous terrain, and even at 50W, they are quickly limited.

Anyway, Monte and Devin had eventually decided that if we were going to find their camp, we would have - so we must have gone out the original route. Still early in the afternoon, and up for some exploration, they'd come looking. So we stood around and laughed about the situation for a while, talked a bit of trucks and mushrooms (it was after all the anniversary of last years mushroom hunt in Montana), and then pushed our suspension once again as we raced up Eagle Creek Road towards camp.

An hour later, we pulled in to warm greetings and apologies for the re-route, and we took in the view from camp. It was cooler here - 60°F or so - and striking how different the surroundings were, some 4000' higher than at the Snake. 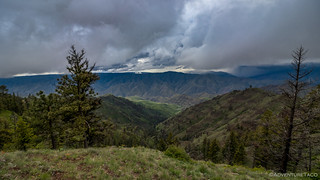 As Monte got the fire going, @mrs.turbodb explored the hillside, eventually calling me over. Still earlier in spring here, the wildflowers were in their full regalia - Indian Paintbrush of all different colors, and numerous other flowers covering the hillsides. 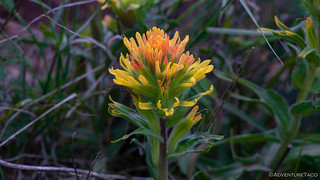 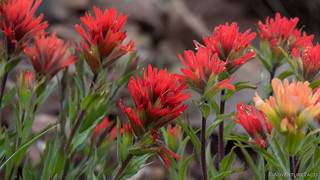 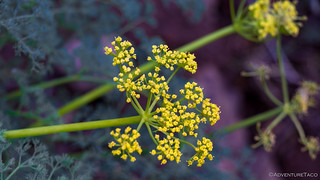 The evening was full of conversation around the campfire - we had, essentially, two groups coming together - a fun time to chat with old friends and get to know new people. Dinners were enjoyed (we had pesto pasta with chicken, fresh corn, and peas!) as we watched cell after storm cell pass to our west, the sun trying its hardest to eek out a meager sunset. 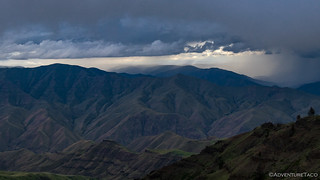 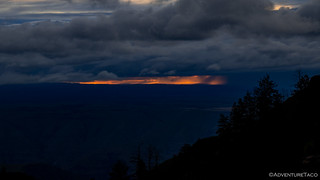 Eventually, one of those storm cells found its way to our camp. Luckily, most of us were about ready for bed at that point anyway - having started heading that direction to brush our teeth as the case may have been - but that didn't mean Monte couldn't give us a hard time for leaving the campfire early!

We climbed into the tent and closed up the doors just as the rain picked up. As it'd been the previous night, it was a downpour - but this time it went on for quite a while. How long exactly I have no idea; I was asleep in minutes. 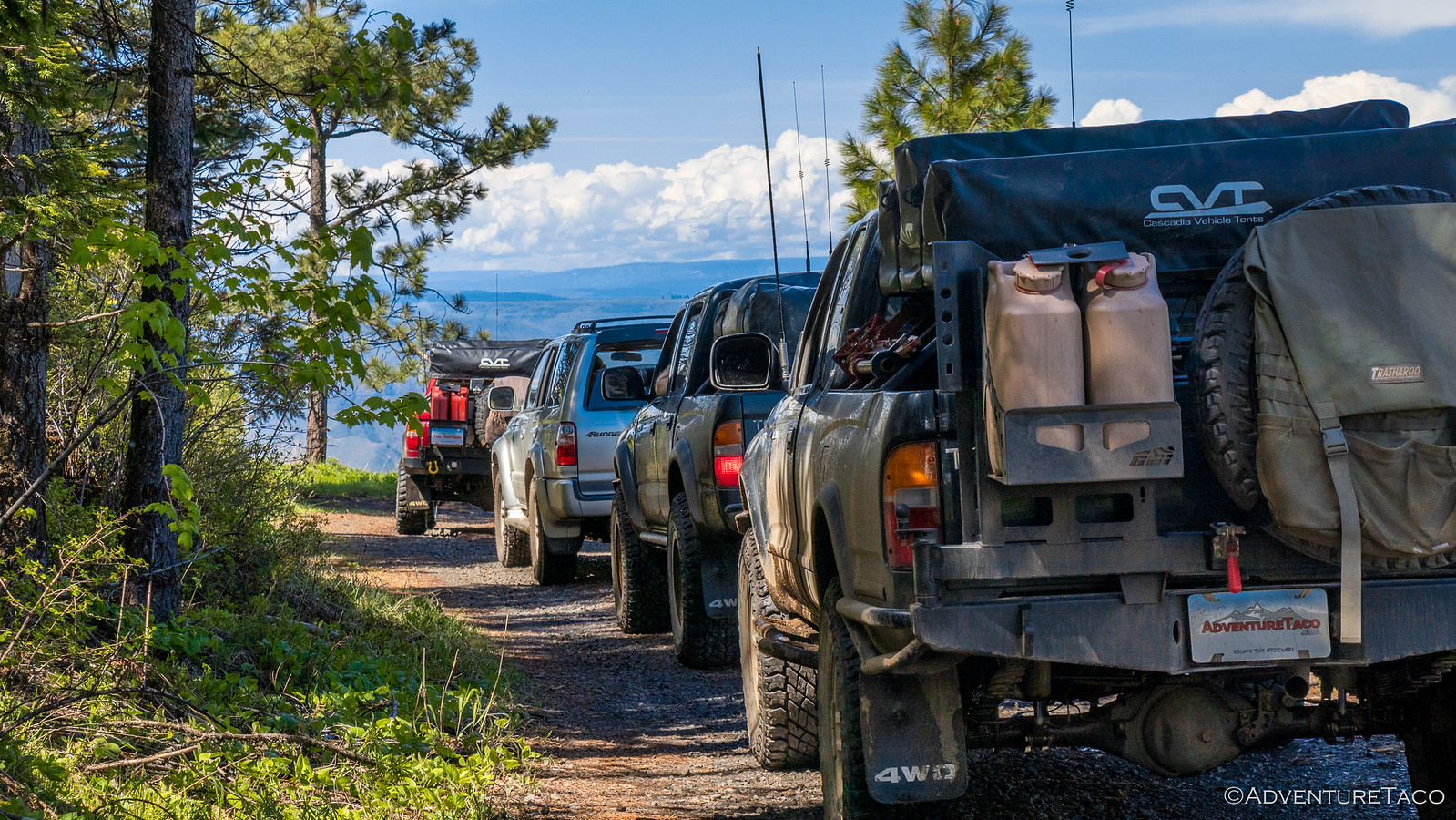