Jealously and smartphones = Bluetooth for the Tacoma

Before @mrs.turbodb and her Audi (which I call a station wagon, but she'll have me tell you is a "Dark Gray 2008 Audi A4 Avante named 'Kitty'"), I'd never experienced Bluetooth in a car. Not for phone calls, not for streaming podcasts, nothing. I mean, I'd only gotten my Windows Phone 7 a few months earlier.

But the Bluetooth in the Audi - that was a great thing.

So, it was time to get Bluetooth in the truck. As always, I went about it in the most difficult way possible. First, I researched. I wanted a Bluetooth stack that worked with Windows Phone, something that had an external microphone, and I wanted it in a stereo package that would last me another 10 years - which meant that it needed to be a touch screen, and it needed to play movies. Because who doesn't want to watch movies while they are driving? No one. But, I'm getting off topic.

I researched for way too long and decided that the Pioneer AVH-3500BHS was the perfect thing for me.

So I bought the stereo from Crutchfield (since they send a free installation kit) and the bypass for the parking brake.

The radio arrived first, and there was no way I was going to do the smart thing and wait for the bypass kit from Amazon before I installed it - that would have been too easy. I mean after all, who doesn't want to rip apart the dash twice to install a stereo? 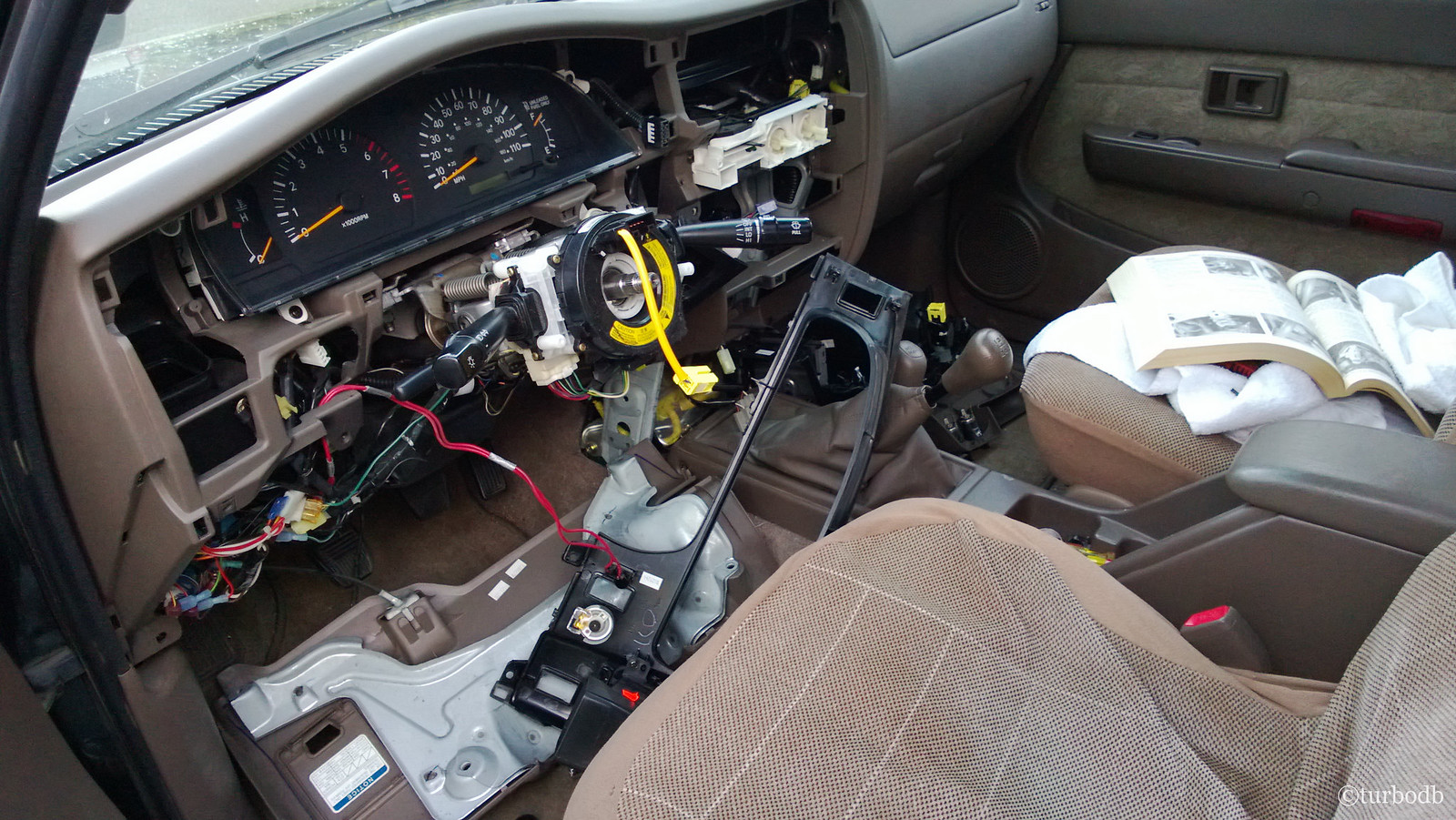 Oh, and I should mention that to install the stereo, one really only need remove the center console dash surround, but rather than stop there, I felt the need to remove the entire dash (an afternoon-long activity that requires steering wheel removal, and the whole nine yards).

But that's what I did. (Silver lining: this did mean that 12 years after putting the steering wheel back on slightly cockeyed when I'd switched the daytime running lights, I could finally reinstall it so that when the truck was going straight, the steering wheel isn't turned 15 degrees to the right!)

Well, an afternoon later, everything was installed for the first time, without the brake bypass - because don't forget, when given the choice between the "easy way" and the "hard way," the "hard way" is always the right choice.

It looked pretty good actually. When it was off. But when it was on, it had this gaudy background that I could never get rid of…except I could. But that's another story for a couple years from now. 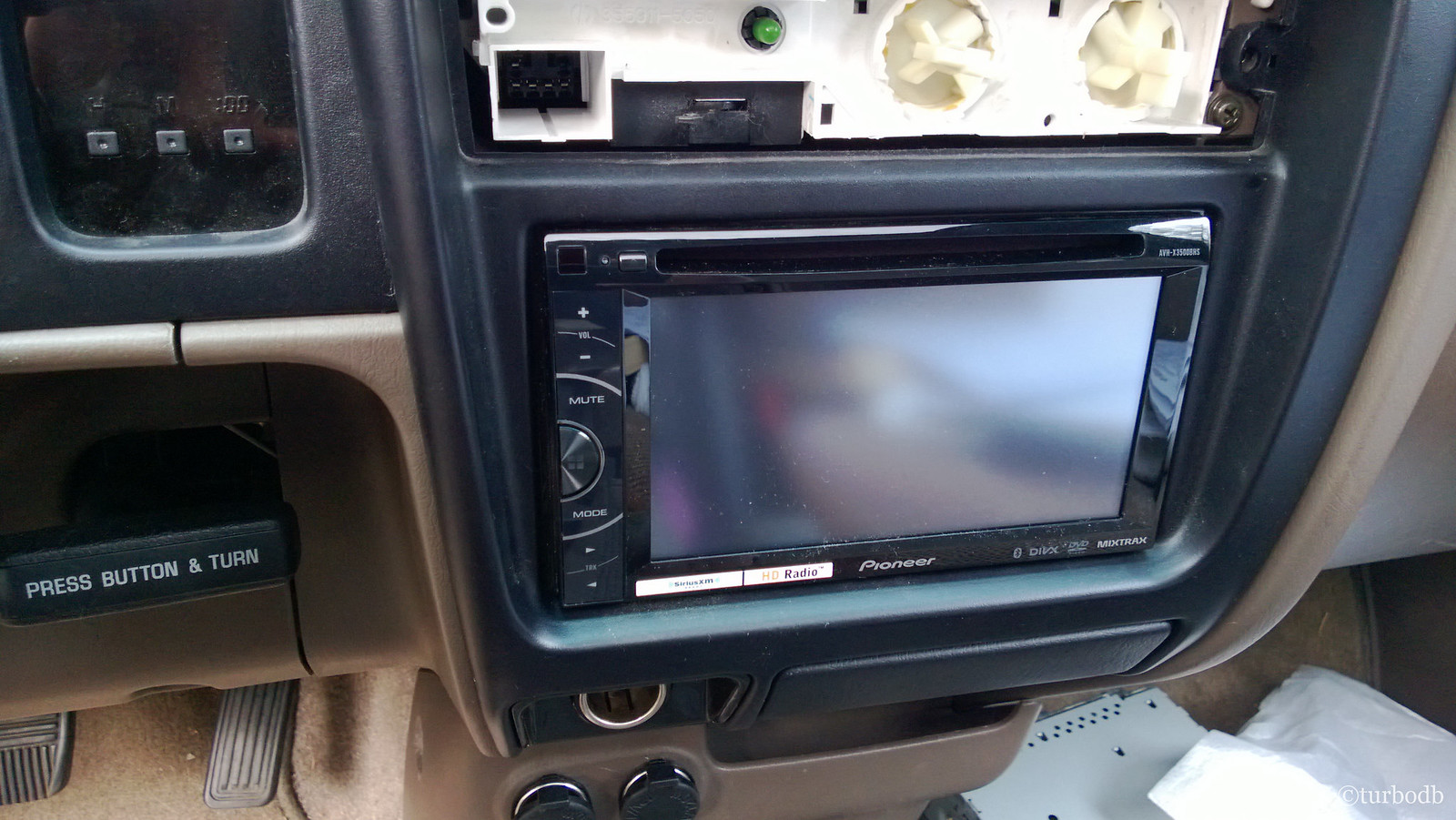 [Update: August 2016] - I've updated the stereo to a new unit that let's me get rid of the terrible background on the Pioneer.

[Update: December 2016] - I've made a terrible mistake with the new stereo.

The more I used the Joying stereo, the less I liked it. Really, I realized that the "things I don't like" are just as important as some of the reasons I put the stereo in to begin with. For example, I originally installed the Pioneer because I wanted great Bluetooth. The fact that Bluetooth is sort of a stinking pile on the Joying means that a lot of things don't "just work."

So anyway, I've changed it up again. I probably waited about 4 years too long, but better late than never. Read all about it in A Stereo that Just Works - Kenwood DMX907S.