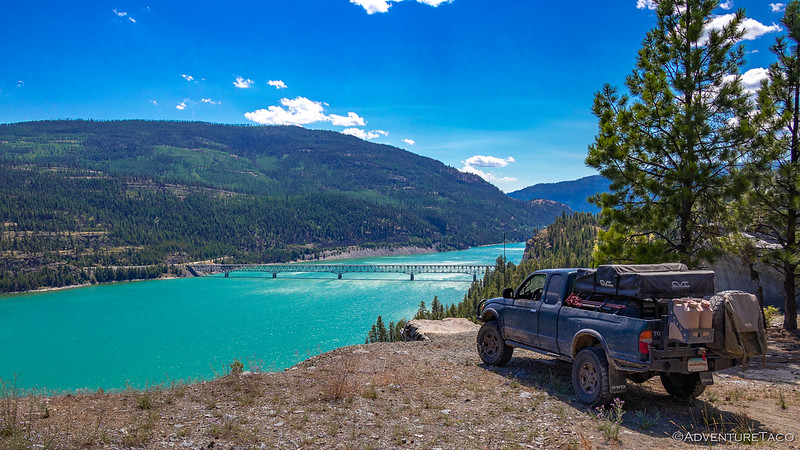 We were awoken early - just after 6:00am - to the sound of rock trucks speeding down the road near camp. Apparently one of the local quarries started work early, and three of the drivers were trying to make good time to their destination!

Dan @drr - already an early riser - was the first out of his tent, Echo excited to get a new day underway. As they headed out on a walk, I putzed around in the tent - a little photo processing and reading - until I heard Mike @Digiratus climb down around 7:00am. The sun was just hitting camp at this point, casting everything in a nice light. 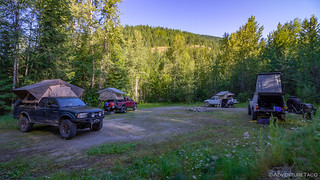 Having had nearly no time to turn myself around between trips, all my meals were extremely simple this time around - cereal for breakfast, tuna sandwiches for lunch, and hot dogs for dinner - so in almost no time I was done with my morning meal and wandered off myself to have a look around the nearby creek. 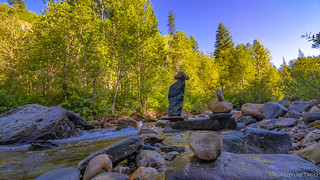 As had been the case the previous day - and would be throughout this day as well - spring was in full force and effect, the sun streaming through the little starbursts of this Spirea (?) specimen as it reached skyward for pollinators. 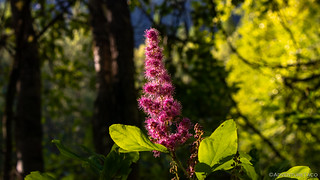 Back in camp, everyone was getting ready to go - well, except Echo, who just wanted to stay and play all day! - and after packing up the cabs and stowing the tents, we rolled out of camp just as the rock trucks were returning for their second load of the morning. 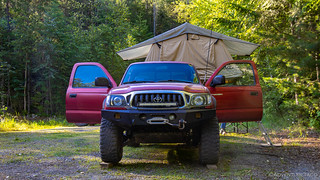 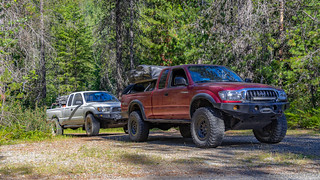 From camp, the first few miles of the morning were an uphill trek - bringing us to the Idaho-Montana border between Copper Ridge and Canuck Peak. The view there was reasonably spectacular, and I took a few minutes to soak it in before continuing on behind the rest of the gang. 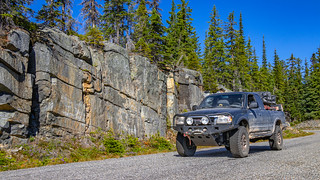 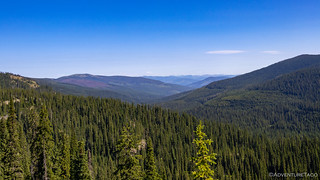 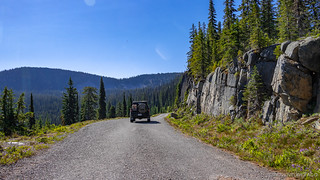 Soon, we were back down in a valley on NF-4354, the tree tunnels thick with growth and the views fewer and further between than our location of just a few minutes earlier. Still, plenty of sun made it down to the forest floor, and spring wildflowers were joyously straining against their roots, showing off for anyone who happened by. 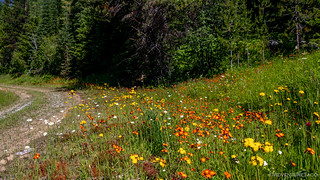 And then, we were climbing again - up towards Garver Mountain - views of what lay ahead peaking out above. 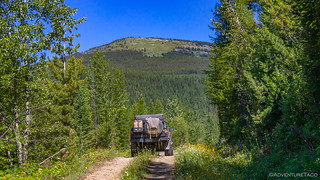 Still a few minutes behind everyone else - as I stopped to smell the wildflowers - I was out of the truck when I heard Mike over the CB, as he let us know that, "We've reached the end of the road guys." Just as had happened the previous day, time had taken its toll on what was once clearly a reasonably well-travelled logging road, and was now completely overgrown and impassable. 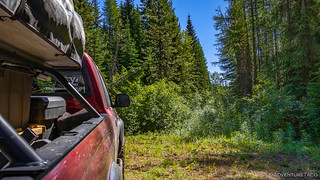 Once again, the paper atlas' came out - this time for Montana - and Mike and Dan poured over them for a re-route while Zane @Speedytech7 and I were entertained by Echo who couldn't have been happier to find the perfect stick here in the woods. 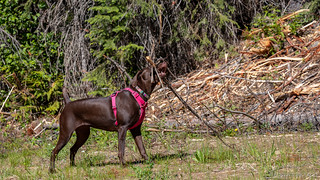 Unfortunately, where our planned route would have taken us on dirt well into the afternoon, it seemed that the only workaround into Yaak was to basically head back down the mountain and onto pavement that would take us into town. This did, however, allow us to make good time with the miles, and before long we were on the outskirts again, the road windy and the views of the Yaak River splendid as it meandered its way through the countryside. 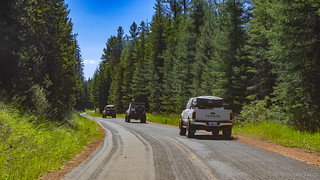 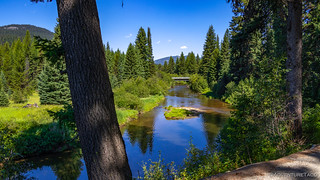 It was in this slalomy stretch of road that a solitary little building stood in a small clearing to our north. Intrigued as I saw the sign at the peak of the gable end, I ducked off the end of the line of Tacomas and had a quick look around. 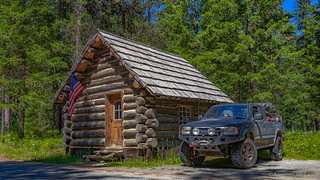 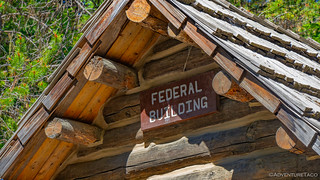 Turns out that this "Federal Building" was in fact just that - a building that fell under federal jurisdiction and housed the mailboxes for the surrounding community, along with a little table for addressing letters, and a few Missing Person posters. What a lucky find! 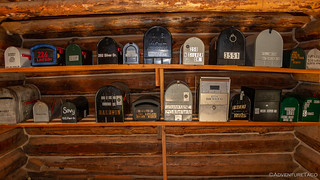 That luck didn't last very long. Less than 15 miles up the road - just where we'd planned to turn off the highway and back onto dirt - we were greeted with what was becoming a bit of a recurring theme for us on this trip - another dead end road, in this case closed to motor vehicles to protect wildlife habitat. 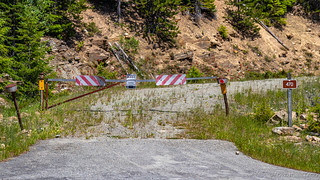 With no options except continuing on the highway that we were already on, we got the trucks turned around and back underway. It was only 11:15am at this point, but being as we were in (fake) Mountain time, some of our phones told us it was 12:15pm, and that made us hungry. So, happening upon a nice little pull-out and camp site along the side of the road, we pulled over and found some shade in which to park the trucks so that sandwiches could be assembled, and company could be enjoyed.

After an hour or so - our usual lunch duration - we all started to get ready to go, when Dan let us know that he was having a bit of an issue starting his truck. He'd had a similar issue earlier in the morning - a wiring issue with the dual battery system he'd recently installed in his truck. It seems that the battery terminals he was using were a bit loose - even though they were as tight as he could get them - and in fixing that issue, one of the crimped connections to his Blue Sea Systems ML-ACR had pulled itself apart. A bit of judicious smashing with a cold chisel and his connections were good enough for the time being, allowing us to get back onto the highway towards Lake Koocanusa.

Expecting "just another" lake, my first glimpse of Lake Koocanusa nearly took my breath away. The turquoise blue of the water reminded me of the lakes we'd seen on the Icefields Parkway in Canada, and some of the glacial lakes that @mrs.turbodb and I had hiked to in the Cascades.

Once again, it was a blessing to be at the back of the pack, and I called ahead to let the gang know that I was going to pull over for a moment for a picture. That was no surprise to Mike - his reply, "I knew you'd want to do that," letting me know that he totally understood! 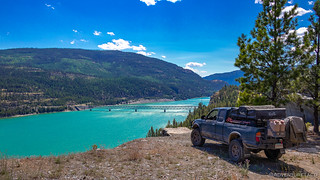 Fancy this - a nice overlook to get a perfect shot.

At over 90 miles long - about half in British Columbia and half in Montana - Koocanusa was a joint project between Canada and the United States, when the Libby Dam was built on the Kootenai River in 1972. It's name comes from the combination of the Kootenai River, Canada, and USA - the winner of a naming contest that was held for the lake. (wikipedia) 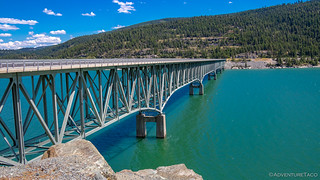 Having reached the west side of the lake only a few miles from the Canadian border, we turned our trucks south and followed its banks for a reasonably long while before Dan mentioned that we might find some good camping to the west on some of the USFS roads that forked off the main road.

Still early - it was only 2:00pm or so - I wondered why in the world we were looking for camp already, but I reminded myself that this trip was really about hanging out with a bunch of buddies, and so I followed along as we headed up into the mountains. 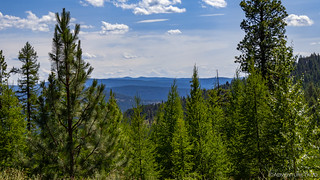 Perhaps predictably, the road we were on didn't get us to the camp site we were looking for - one with a northerly view, where we hoped to see the NEOWISE comet as it made its once-every-6800-year pass of our little slice of space. Instead, it dead ended at an old logging platform, the remainder of the road lost to time; our third dead end of the day! 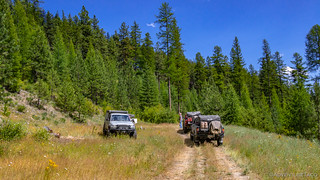 Around we turned, back out to pavement and up another side road that had a promising look to it, and even more promising - a sign to Zeigler Lookout. Alas, the road to the lookout was gated (surprise!) about five miles before the lookout itself, so we continued on the main road as it got narrower and narrower and ... well, you get the drift. 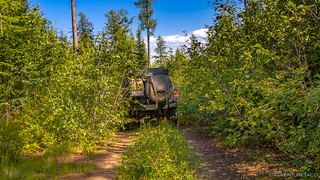 Eventually it became clear that even our skinny 1st gen Tacomas were too fat to continue, and we looked for a spot to turn around. Yep, it was now five(!) times that we'd been foiled in a single day. Suddenly, starting to look for camp at 2:00pm was starting to seem like the right call, and to better our chances at success, we split up into groups of two - Zane and I heading up one fork and Dan and Mike heading up another in search of our home for the night.

Ham radios allowing us to stay in communication regarding our findings, Zane and I climbed up the eastern face of a ridge, tantalizingly close to its highest point where we'd have a spectacular view to the north. Then, just as we were within a hundred yards or so of the perfect spot, the road crested at Lost Soul Divide and started heading back down the mountain.

We stopped to report the situation and admire the view to the east. 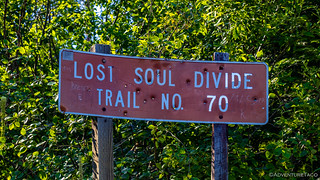 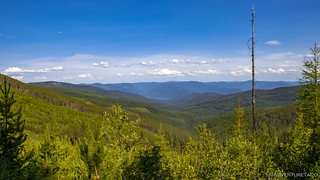 Lake Koocanusa from Lost Soul Divide. A camp site here would have been spectacular.

Mike and Dan on the other hand had a bit more luck. The hadn't found anything with a view, but they did find a nice little place at the end of a logging road with plenty of wood and a location that would guarantee us privacy through the night.

At 5:30pm, guided by Mike on his Ham radio, Zane and I pulled into camp. Three hours and numerous dead-end roads, I think we were all ready to be done. Gathered in our chairs, we sat around chatting and laughing as the light waned. Mike made guacamole which lasted all of about 2 minutes, and then broke out a second avocado to make some more!

And then - as if the guac wasn't enough - Mike offered to make us all Tacos for dinner! Yep, he'd been working on a new recipe and we were the "unfortunate" individuals he "forced" to try them out. We were all, as you can imagine, delighted. 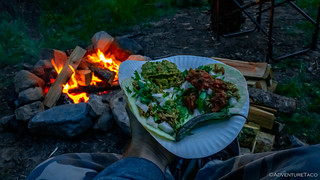 Our bellies full, we recounted the events of the day and the craziness of the trip so far. I'm sure too that we chatted about trucks, life, and probably many other things as the stars came out and started tracing their way across the night sky. Our position meant no chance at NEOWISE, but that was just fine - it'd be there the next night as well if we could find a spot with a bit better vantage point.

Once again, the rest of the gang outlasted me as I headed off to bed at 11:30pm, feeling like the oldest dude of the bunch. But hey, I headed to bed knowing that the next morning would bring something special - something we'd all been looking forward to since Dan had mentioned it on our first night of camp...

...but hey, that's the beginning of another story. 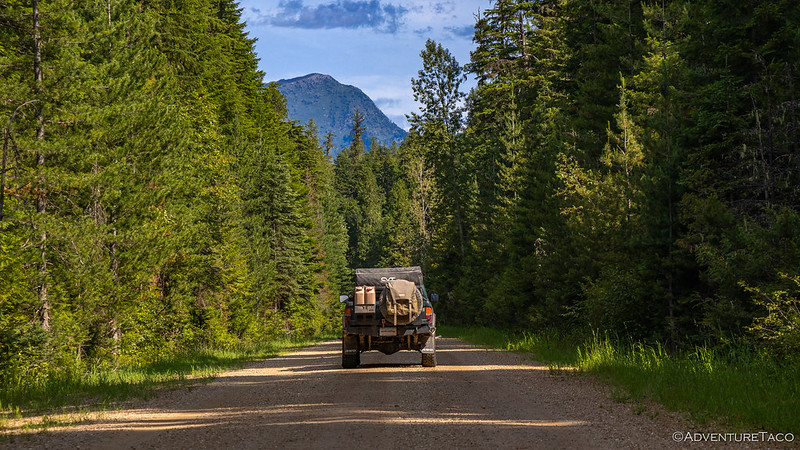 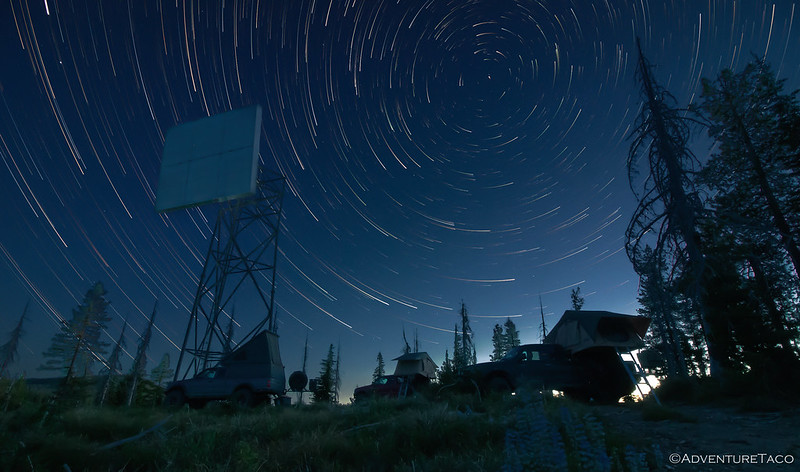