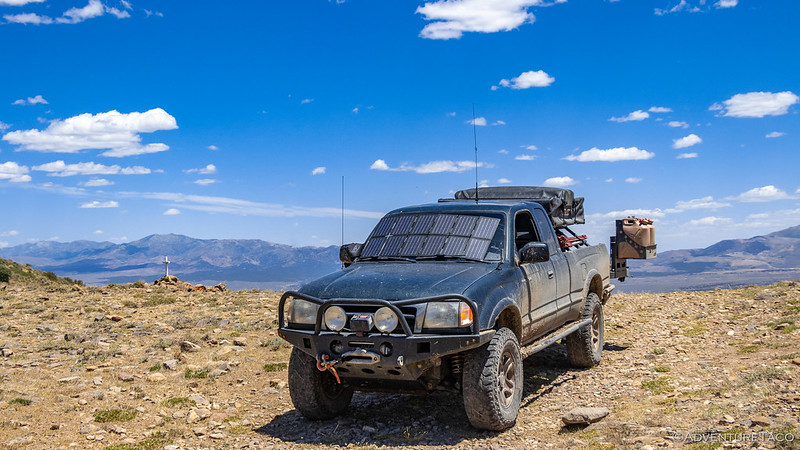 I just got done camping in one spot for three days. Temps were in the high 80's, the ARB 50qt fridge was set to 35ºF, and the 175W inverter was running much of the time charging various electronic devices. The whole time, I didn't start the truck once.

A couple weeks ago, my dual battery system would have been hosed by the end of this trip - probably wouldn't have even lasted the entire time - but when we pulled out of camp this time, the batteries were topped off and had power to spare.

This my friends, is the amazingness of solar. For this style of stationary camping, it's a game changer! Let's back up for a moment to figure out how I got here, and then I'll lay out how I setup my system.

Background - Why Has It Taken Three Years?

There are really two types of vehicle adventuring in my book. One - where the vehicle is driven most of the day, only really stopping at night to camp - allows the alternator to keep the battery(s) charged. The other - where the vehicle is driven to a given location, and then not started for several days while that location is enjoyed - means that some other method must be used to keep batteries charged and electronics running. 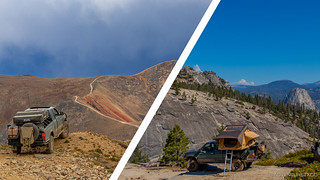 Neither style of camping is "best," but each has their own set of considerations.

For the last several years - and even today - the first style of adventure is my primary mode of getting out there. I can count on my fingers the number of nights that I've stayed in the same spot more than once, so using the alternator to keep everything going has been great. Sure, at some point I wanted a bit of redundancy and added a secondary battery to my setup to give me peace of mind on hot summer nights - but mostly I did that so that I could be confident about starting the truck in some of the remote locations we visit.

But, for three years now I've been going on at least one or two trips each year where I stay in one spot for an extended time. Usually these are family trips - with @mini and @mrs.turbodb, or with my Dad - where the goal is enjoying each other's company more than it is seeing everything we can. And, as hiking becomes a bigger part of each adventure, even the see everything trips can often mean the Tacoma sits for a day while we explore on foot.

Before the fridge, this wouldn't have been much of an issue. I could still go back to a cooler with ice for these types of adventures. But the fridge is one of the top three game-changing mods from my perspective and makes life so much easier that it was time to find a solution that allowed it to keep doing its job.

What I Choose and Why

My requirements when I started were relatively simple, I thought:

Initially, I thought I was going to get a rigid panel that I could mount to the roof of the Tacoma - over the sunroof, which I dislike because the sun shining through all day makes me hot - and solve two issues with one solution. Quick releases would mean that I could move the panel between vehicles, or not bring it at all on trips where I knew I'd be driving all the time. 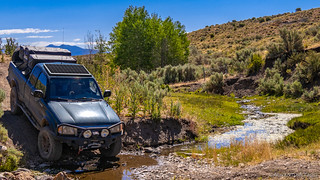 Nice conceptually, but not ideal in practice. Form over function, really.

But, after a bit more research, there were a couple drawbacks that I just couldn't get over: first, rigid panels are relatively heavy at between 20-30lbs. Second, by mounting the panel flat on the roof, I'd be limiting my ability to orient it towards the sun, and I'd require myself to park in the sun rather than leaving the panel in the sun and parking the truck (and fridge) in the shade.

So, I started considering a rigid panel that folded. This wouldn't solve the weight issue, but would allow me to position the solar panels away from the vehicle and orient them toward the sun for maximum power generation. Still, these are big an bulky and I didn't like the idea of having to pack them in the cab. 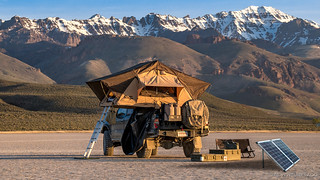 Fully functional, but clumsy form in that the panels would be hard to pack around. And still heavy.

I kept looking, and eventually stumbled upon a few informative online articles and videos that talked about solar blankets. These are less "blankets" and more "small panels hooked together with flexible material." As such, some can fold up into reasonably small packages, and they weigh significantly less than rigid panels since there's no aluminum frame, glass on the panel, backing plate, mounting hardware, etc. The only problem - predictably - is that they can be costly. This Off-Grid-Trek was recently featured on Expedition Portal, but their cheapest 200W blankets cost nearly (cough) $1500; a 112W REDARC offering costs over $1700 at the time of writing and is not even sold in the USA.

But then, with some more research, I stumbled upon a reasonably cheap foldable panel that seemed to tick all my boxes. The TP-solar 100W Foldable Solar Panel Charger Kit.

And, it (initially) seemed to tick a few more as well:

The first issue I could live with - after all, what I really cared about was charging, not the technology used for that charge. The second issue though was a showstopper for me; with a 100W panel, I knew I needed to get as much power as I could out of the panel if I hoped to keep the batteries charged and the fridge running on hot days in camp. So I started looking at charge controllers.

Initially, I thought I'd get a REDARC BCDC1225D DC-DC Charger w/Solar. I've heard great things about Redarc, and knew it'd work just fine for my purposes. But, I also knew it was overkill - after all, a big part - the main part really - of the Redarc DC charger is to keep a second battery charged from the alternator, with solar being a secondary consideration. Plus, it cost nearly $400, bleh!

So I started doing more research. I quickly discovered that there are two types of solar controllers that exist today (2020):

Clearly, I wanted an MPPT controller. The Redarc fit that bill nicely, except for the price and so I set out to find other brands. There were of course specialty controllers for "bug out" and "preppers," but these cost even more than the Redarc and were much too large for my taste, so I passed them by. Ultimately, two brands kept popping up - Renogy and Victron. Both seemed to have their followers, but reading between the lines on reviews, it became clear that Renogy was a leader due to (low) cost, and Victron was a leader due to (high) quality. Not only that, but the Victron SmartSolar line allowed for configuration and monitoring of the controller via Bluetooth from a smartphone - a very nice touch. And, since the Victron focused on being a solar controller only, its price was significantly less than the Redarc BCDC1225D.

So, I picked up a Victron SmartSolar MPPT 100/20 Solar Charge Controller w/Bluetooth, which could handle panel configurations of up to 100V @ 20A - significantly more than I'll ever need. 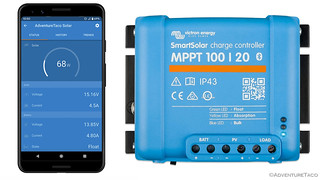 Setting It All Up Was Easy

Most of my time on this project was spent in the research phase - so here's a quick review of the parts I ended up with. Total cost of these parts was under $400.

In the simplest system, the charge controller could be constantly connected to the battery. This would meet the connection order criteria, but has the drawback that the charge controller draws a bit of power from the battery at all times (to enable Bluetooth, and the internals of the controller). As such, a better solution is to place a quick connect between the controller and battery - either using something like an Anderson Powerpole connector or even a Bussmann 80A Circuit Breaker. The Anderson connectors are both simpler and cheaper, so I opted for this route, making two short lengths of 12ga red/black wire. One end of both these wire sets connected to the controller and battery respectively, and the other end terminated in an Anderson connector - allowing the two components to be quickly dis/connected.

I also mounted the charge controller vertically - as per the installation instructions - in the electronics drawer of my in-cab power distribution station. 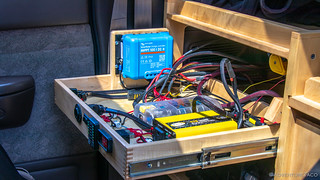 The only other step was to create a 30' long, 12ga red/black cable that would connect the charge controller to the solar panel. I started by measuring out two lengths of red and black cable and fishing them through a similar length of wire loom in order to keep them tidy. A bit of shrink wrap on each end completed the bundle. Then, one end of the cable received a Male 2.1x5.5mm connector* that would plug into the solar panel, and the other end received a pair of powerpole connector that I could plug into a small 12ga pigtail running out of the controller. 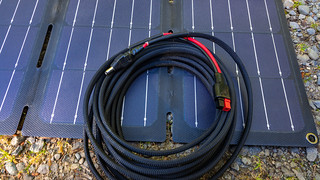 * Note: I was asked a good question about the connectors that I've linked, since they have a 16ga pigtail, and the rest of my extension cable is 12ga. Does that reduction in wire size cause any sort of problem? Check out my response in the comments below.

The short answer is: better than I could have ever imagined. The first few days I used it, I kept mentioning to @mrs.turbodb how magical it all was!

The solar panel can be positioned in the most convenient location - on the roof, windshield, next to the vehicle - wherever the most power is generated. 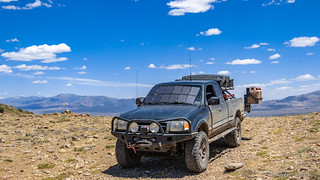 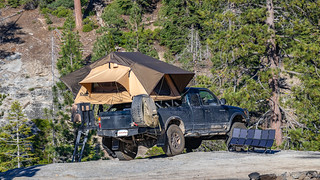 And, both the panel and controller seem to work spectacularly. Peak power appears to be on the order of 70W out of the panel - right at the theoretical maximum I'd expect, and the controller does a splendid job of managing that power into the batteries over time. 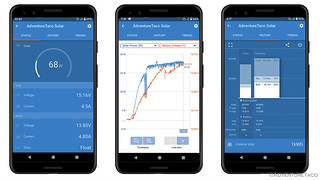 A few very interesting things I've noticed over the first week or so of daily use:

As of now, I couldn't be happier. Adding solar has enabled me to camp-in-place much more confidently than I have in the past. Well, the recent past anyway, with food cooled in the fridge!