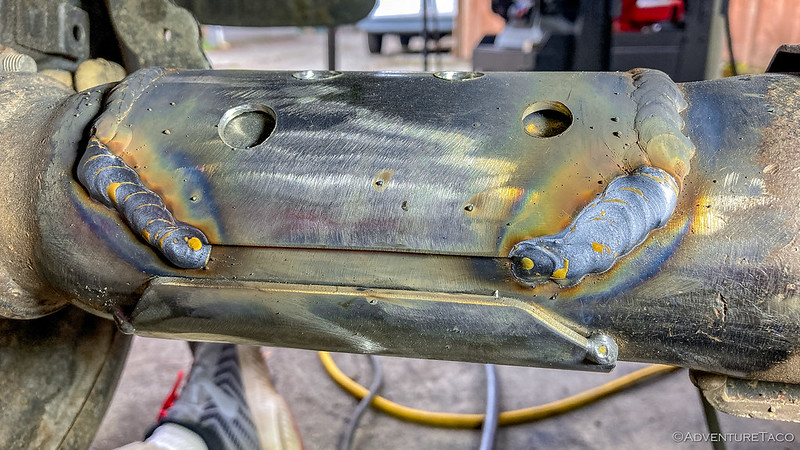 On the Road Again - Temporarily Patching the Rear Axle Housing

It seems like it's been a lot longer, but it was only a couple of weeks ago that I noticed my rear axle housing was leaking at the passenger side leaf spring perch. On my way home from surveying the Aftermath of the Creek and Dixie Fires, I knew that this was not some maintenance item that I could just put off until there were no trips on the horizon. Nope, this is something that I needed to deal with right away. 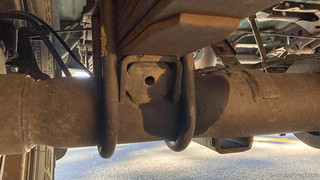 After several fruitful discussions with my buddies on TacomaWorld, I immediately set about lining up the long-term fix - acquisition of a new axle housing - by contacting the good folks (Brian) at Diamond Axles (aka Front Range Off Road) to discussion my options and get a housing ordered.

And now, I have six weeks to wait for my new housing to show up. Oh, and then I have to finish fabrication of all the attached bits, install it.

Clearly, that's not going to work for me from a trip perspective - I'm already feeling antsy and with the weather changing, I've already missed a couple places I wanted to visit this fall - at least until next year.

So - as a stop-gap measure - I'm going to patch up the axle housing and hope that it holds long enough for the new housing to arrive!

Credit for this solution - at least, as far as my use of it - goes 100% to Ryan @Reh5108, who has already performed this fix on his truck with great success. The idea is to both weld the existing crack in the housing, and also weld a patch over the housing in order to reinforce that area.

Day 1 - Hoping for the Best, with Bits from the Trash

I got started by heading to the local steel yard to find a six inch long piece of 3" ID tubing that I could use for the patch. I was hoping for something in the 3/16" wall thickness range, but it turned out that they had no 3" ID round tube in stock at all! The could special order me a 20-foot long stick, but at $340, that was a little more than I was looking for.

I dug around a bit in the remnant bin, and was bummed to not find what I was looking for there, either. There were, however, four, forty-five-degree cut-offs that were 3" OD with 1/8" wall that seemed to be reasonably cleanly cut, and I figured that at a measly $4.94, I could at least give them a shot. 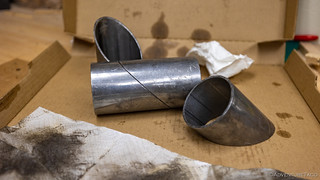 I have no idea if this will work, but it's not going to cost me much money! I started by cleaning everything with mineral spirits.

The idea - good or bad, I'm not sure - was to weld two of these pieces together, creating a single six-inch-long piece of tubing that I could then cut in half to sandwich the axle. And, I had enough for two sandwiches, in case - or for when - I messed the first one up. 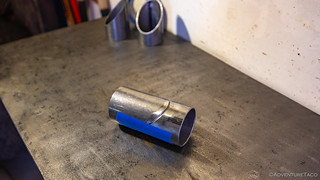 Joints bevelled and polished, tubes aligned and taped for tacking.

I started with two tacks - and then four - to make sure that everything remained aligned. I have to say, I was pleasantly surprised that everything did stay aligned, the interior seam hard to discern by feel. And so, I started welding. 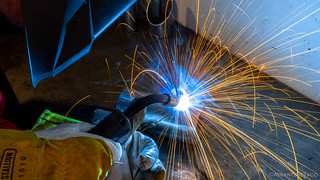 The welding went... fine, I suppose. There were a couple places where things got hot and I nearly burned through the tube, but most of the seam was properly glued together - I think. I broke out the grinder and set to work cleaning things up, and to my delight, I ended up with two straight lengths of 1/8" wall, 3" OD pipe! 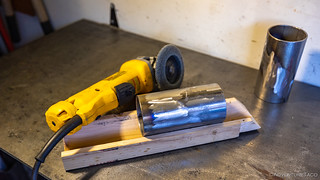 A block of wood with a 45-degree groove makes for a good tube holder while grinding.

A bit of marking and some more grinding, and soon I had four pieces of half-pipe. Or half-tube, I suppose - ready for final sizing and shaping to sandwich the axle housing. 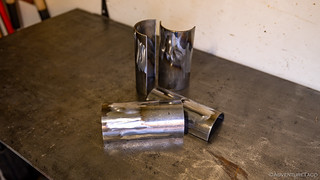 They almost look like they started as 6" pieces of tube.

Flush with success, I mostly called it a day. I'd deal with prepping the axle housing - a chore I was not looking forward to - later. So I removed the drain bolt on the rear diff and figured that a good 12 hours to drain would help to get as much out as possible before I started welding on the housing. 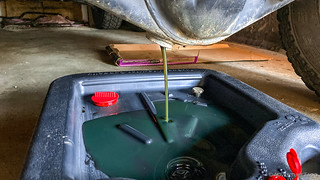 Oil looks pretty good for having been in service for ~30K miles.

Day 2 - I Really Hope this Works

I got started early the following day - or at least earlier. I'd left the rear diff with the oil draining overnight and so my first order of business was to get the truck up on jack stands and the wheel removed. A pretty standard operation, the difference this time was that I scooted the truck as far to one side of the garage as possible to give myself some room to work - since it was suppossed to rain all day, and just in case I wasn't able to finish the job for some reason. 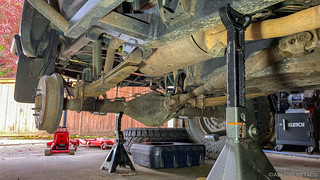 Up on jack stands, in the most cramped garage ever.

Next, I started removing everything from the passenger side of the rear axle. Brake lines, shocks, ABS sensors - all came off. And then it was time for the leaf spring. I always hate removing the leafs because it always seems hard to get everything to line up again. But, with no choice, I used the Milwaukee M18 mid-torque impact wrench to ugga-dugga them off. 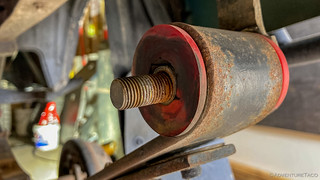 Well then, that explains all the squeaking from the rear end! 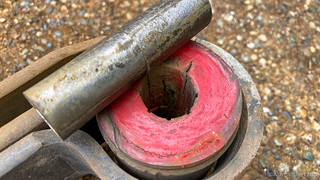 With the leafs removed, I finally had access to the troublesome perch. It's the welds between this bit of steel and the axle housing that crack, so I was going to need to chop it off before I could continue on. 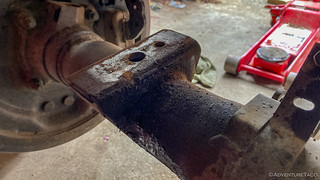 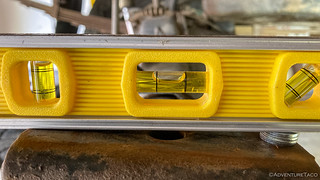 I wanted to make sure I got the orientation right when I burned on the new perch, so I checked the alignment of the original before continuing on. 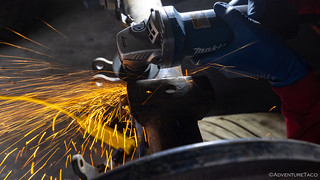 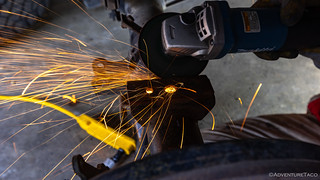 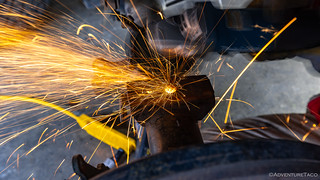 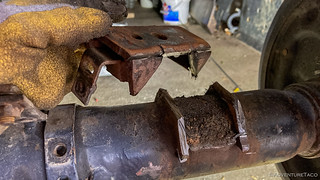 No turning back now, I commenced grinding. I'll always remember when Zane @Speedytech7 looked at me like I was crazy for using a grinding disc when we were relocating my rear shocks. Even though they were significantly more expensive, he helped me to realize that both the speed and surface finish left by a flap disc was well worth the extra cost. 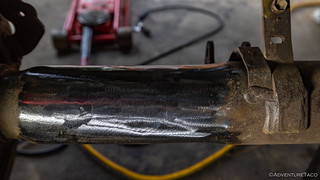 Shiny! And you can already see a crack if you look closely.

With the axle cleaned up, before I could put everything back together, I needed to fix the crack as well as I could. Drilling the ends - to prevent further cracking - and grooving the crack itself were the next step. Using my phone to magnify the surface, I found that there wasn't just one crack running around the housing, but there was another crack starting along the front of the leaf perch. 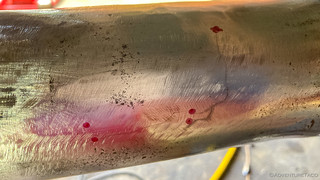 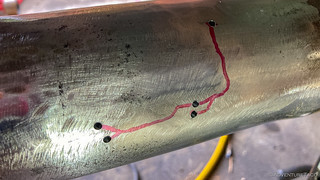 Ends drilled, and old-eye-assist for grooving. 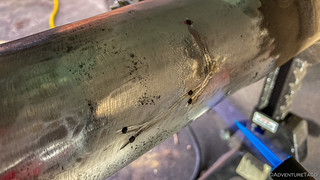 Ready to weld up, I used a torch to burn as much of the gear oil out of the crack as possible. A recommendation from Ryan. Thanks Ryan!

With the axle prepped, it was time for final shaping of the patches I'd created the day before. I measured - and cut - for length, and then also trimmed the corners. A bit of noodling - just a bit, too much makes my brain hurt - and I also decided to drill some holes in the top patch to add some rosette welds for additional strength. 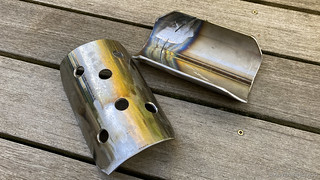 Patch plates ready to go. Only the top plate has rosettes, since that's where the new leaf perch will attach. Since the patches are only 1/8" thick, I didn't want to rip the patch itself! 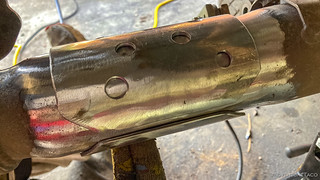 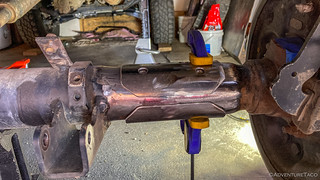 Was I ready for welding? No. Was the next step in the project welding? Certainly, yes. So, I pulled up my little boy pants and reminded myself that if everything went south, I could grind everything off and use the two additional plates that I'd purchased just in case. Assuming - that is - that I didn't totally screw up the axle housing. 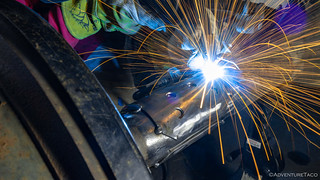 I was actually most nervous that the housing would get too hot and ruin the axle seals as I welded on the plates. 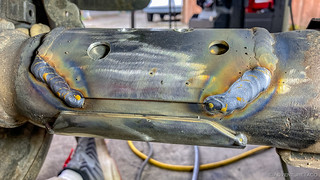 Looking at these, I'm definitely not a welder. I'm more of a grinder.

Soon enough, the plates were on, and after a bit of grinding to get the surfaces smooth where the new leaf perch would sit, I used the metal-gluing gun to zip the perch on. 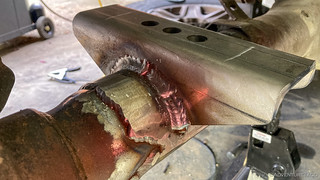 Almost looks like it was meant to be there.

The last step - well, before reinstalling everything I'd removed - was to give the whole situation a spritz of paint. Some primer, and then a bit of black, made it look - almost - like nothing had happened. 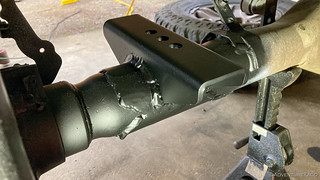 My hope - as I reinstalled everything a half-hour later, the paint having dried quickly since the axle housing was still warm when I sprayed it - is that I'll get several months out of this repair. I don't need it to last forever, since I've already ordered a Diamond Axle, but I do want to start heading down to the desert as fall progresses. Death Valley, Owens Valley, and the wide open expanses are calling!

The first trip - to the Nevada/California border between Walker Lake and Mono Lake - is in the books. So far, the patch seems to be holding up well! The wheel didn't fall off, and I haven't seen any cracking or oil evident at the perch location. Fingers crossed that my success holds!

On the Road Again - Temporarily Patching the Rear Axle Housing

Published in Tacoma Maintenance; experienced on 2021-10-12