Hiking Death Valley was a different kind of trip - one with more time away from the truck, and less time driving. So the rig review this time has a little less to go on - but that doesn't make me any less passionate about the bits of kit that were working well!.

TL;DR - if you ever feel like your RTT mattress leaves a little something to be desired, don't buy a foam topper to try to increase it's thickness. Get an Exped MegaMat Duo 10 LXW. You won't regret it even though it's pricey - this is the most comfortable sleeping experience I've ever had.

For the last few trips, I've started to notice that the foam mattress in the @Cascadia Tents Mt. Shasta Pioneer has started to be a little less "supportive." I think this is mostly due to age - it's been used for over 100 nights at this point - and a lot of folks end up adding those egg-crate style toppers to their mattresses in order to counter this phenomenon.

I wasn't keen to add a topper since I already feel like I'm smooshing stuff quite a bit when I close the tent, and so I set about researching a replacement mat. The key - I believed - was that it be inflatable. That inflation would provide extra support where the foam couldn't, and thus keep hips, shoulders, etc. up off the floor through the night.

When I stumbled across the Exped MegaMat Duo 10 LXW, I initially just scoffed at the price and moved on. But the more I researched on various forums, the more the Exped continued to be brought up as the ultimate in a good night sleep. At four inches thick, and composed of both foam and air, it seemed like it could do a good job... if I could just get over it's hefty price tag.

Ultimately I did, and let me tell you - my body, and more importantly @mrs.turbodb's body, have never been happier after a night in the RTT. This thing is seriously like sleeping on a home mattress. It's that good. Shocking I'd say. Easily worth the price - assuming it lasts - and now my all-time favorite mod to my camping setup. Wow, that surprises even me.

Oh, and as a side benefit - because of the construction (air simply pushes out of the mat), the Exped MegaMat Duo 10 compresses even more (and more easily) than the original CVT foam mattress - making closing up the tent easier than ever before.

As far as fit goes, there are three versions of this mattress depending on the size of your RTT:

None of these is as long as an unfolded tent - generally 96" - but that's OK. The matt leaves about 6-8" of space on each end, which I find to be a good place to stash shoes, clothes, bags, etc. that I bring into the tent. Plus, those spaces really aren't usable for sleeping anyway due to the angle of the tent wall as it reaches the floor. If it really bothers you, you can easily slide the Exped toward the head end of the tent and leave all the space at the foot end - you'd never notice it while sleeping.

TL;DR - the ADS setup is working great. We didn't do much dirt travel this time, but what little we did do was no problem at all. More to come in the future.

This was the first trip with the relocated rear suspension running 10" travel ADS 2.5" smooth body shocks with remote reservoirs in the back of the truck as well as new SPC Upper Control Arms and ADS 2.5" coilovers with remote reservoirs in the front of the truck. I can say without a shadow of a doubt that this setup was not only better and more comfortable than running without rear shocks along the entirety of the Mojave Road, but was also better than my previous rear shock setup. The fronts were a little harder to tell - but again, we weren't really pushing it this trip.

Additionally, there were no problems bottoming out the rear shocks, which was a good thing. Hopefully that remains the case into the future. 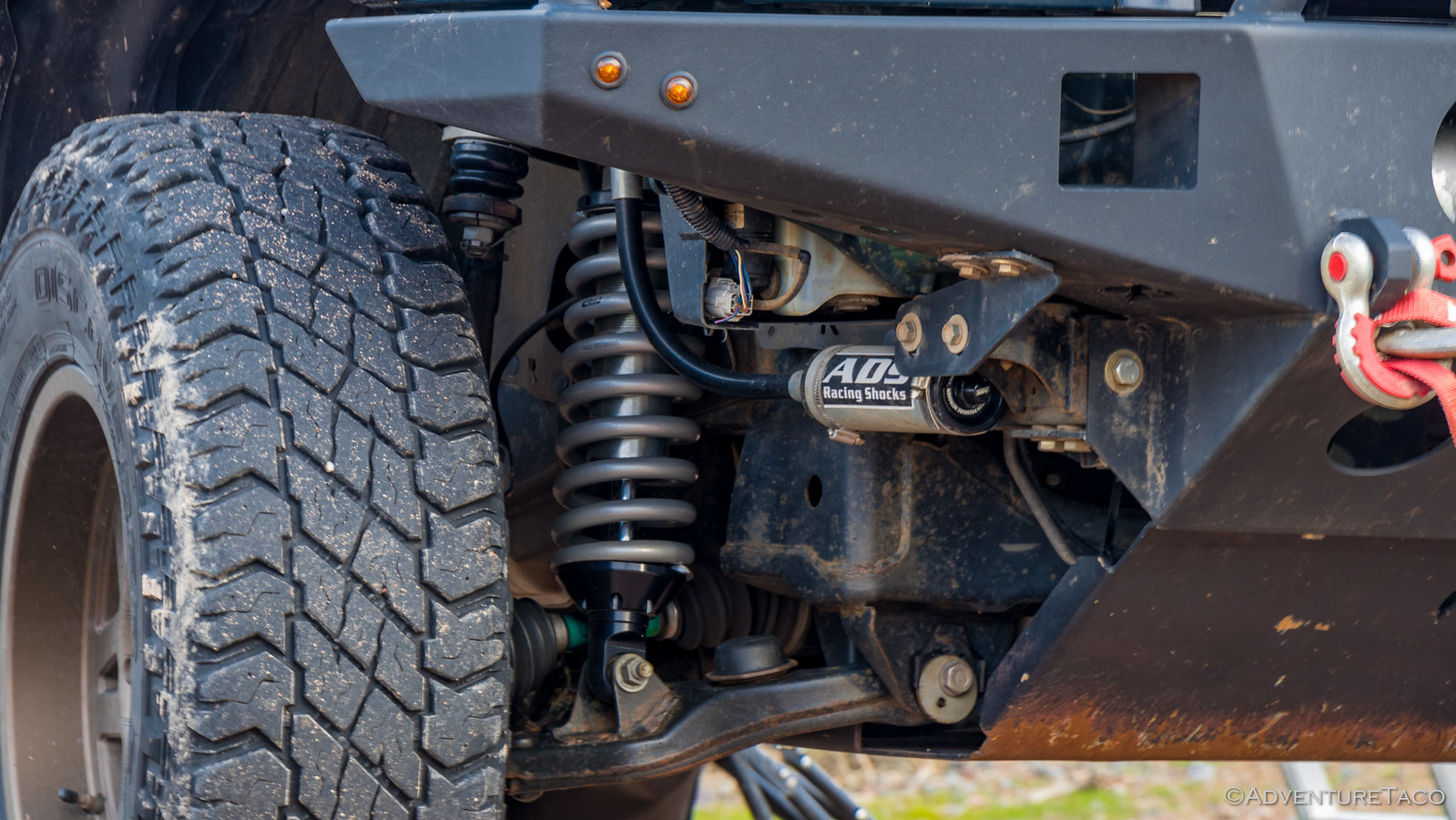 In all fairness to the rig, I didn't really do anything except maintenance since the last review, so it's my fault that there's nothing to list here. My apologies to the truck.