F.U.Rain 2018 was two more weeks in the wild, hot on the heels of The Re-Tour. The truck once again performed well, getting me everywhere I needed to be with relative ease. The difference with this trip was the wet and muddy weather. Certain pieces of kit worked well in those situations, while others ...didn't.

I like this new Coleman Camp Stove/Grill. Seems to have the benefits of a smaller camp stove from a packing and propane usage perspective, while retaining the ability to grill (for a family of 3-4). Definitely better than the previous setup. Two non-ideal things that I'll need to fix over time: the dials for the burners seem overly sensitive - they seem to have "off" and "high." More importantly though, the latches to keep the wind screens attached to the top are very easily dislodged, causing the whole thing to "fall apart." It's loud, and inconvenient, though doesn't affect the cook performance. 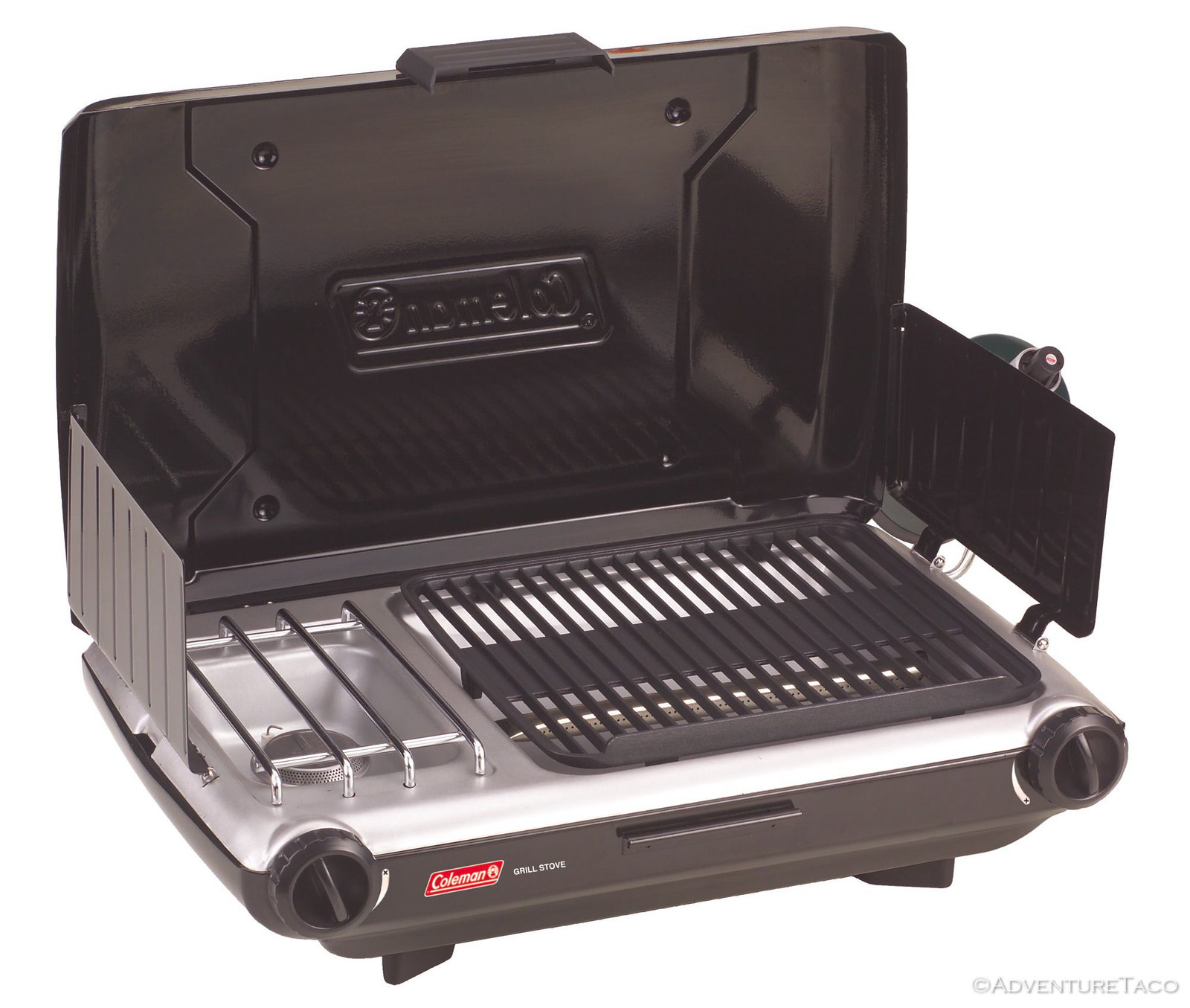 These are some new containers that I got on a recommendation from Monte @Blackdawg, because they fit well in the bed of a first gen Tacoma. I've got to say, so far I'm impressed. They are relatively light (for their size), waterproof, and durable. Oh, and they fit really well in the bed (as expected). 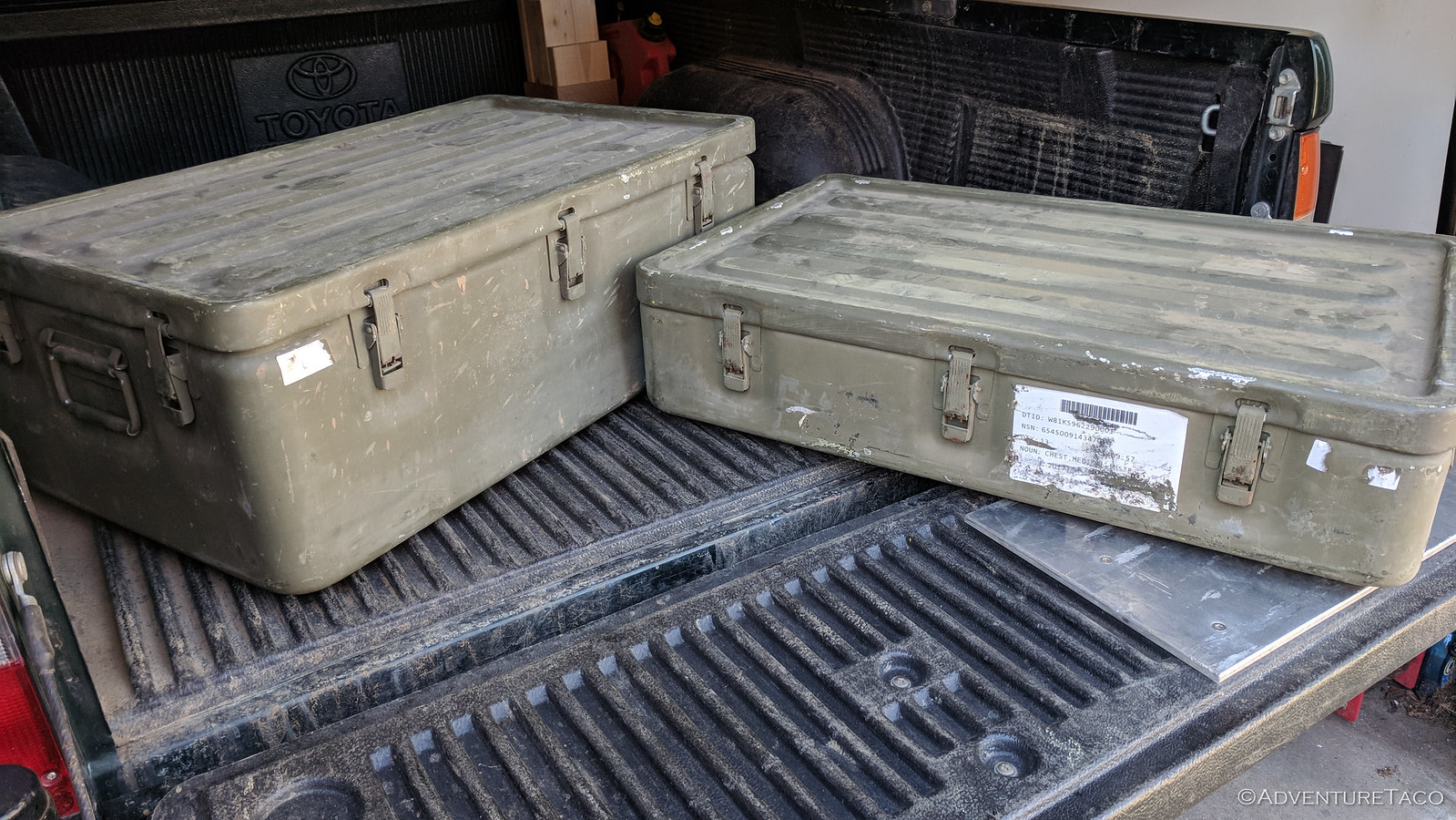 TL;DR - I love the look of these Stealth6's, but I'm on the hunt for new wheels; or at least some solution to the amount of mud that gets thrown into/onto the truck when I run around in wet weather.

I've really loved the look of the SCS Stealth6 wheels since I installed them. They are 16"x8" with 3.5" backspacing, which means they sit about an inch further outboard than stock wheels. That means that in muddy terrain, the mud gets everywhere, since they protrude an inch or so past the fender flares.

Apparently I haven't been on a really muddy trip since I installed them, until the F.U.Rain 2018 trip. Actually, it's probably more correct to say that the type of mud was different on this trip - it was clay-based, and so clumps up in the tires, gets flung up into the air, and then sticks to whatever it lands on - in my case, the sides of the truck, the roof, the windshield, and the bed (the parts that aren't fully covered by the tent).

When I returned from the last trip, I had over 13 gallons of dry mud I removed from the truck before I even started washing it, and another 10+ gallons that were removed by the pressure washer. It was a colossal mess - especially in the bed, where it gets on everything - and an issue I want to solve moving forward.

I don't as yet know how. New wheels? Bigger fender flares? A combination? 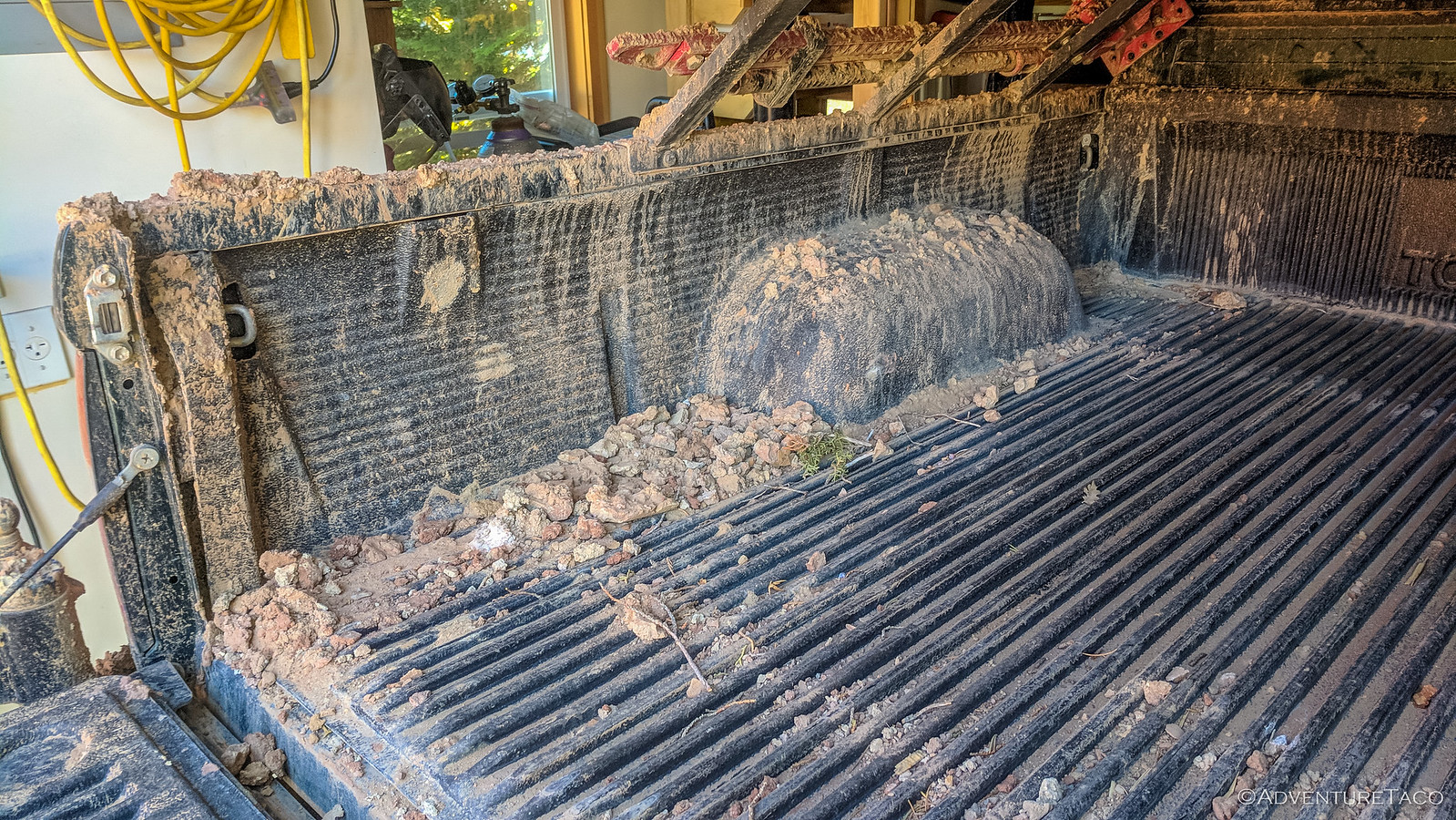 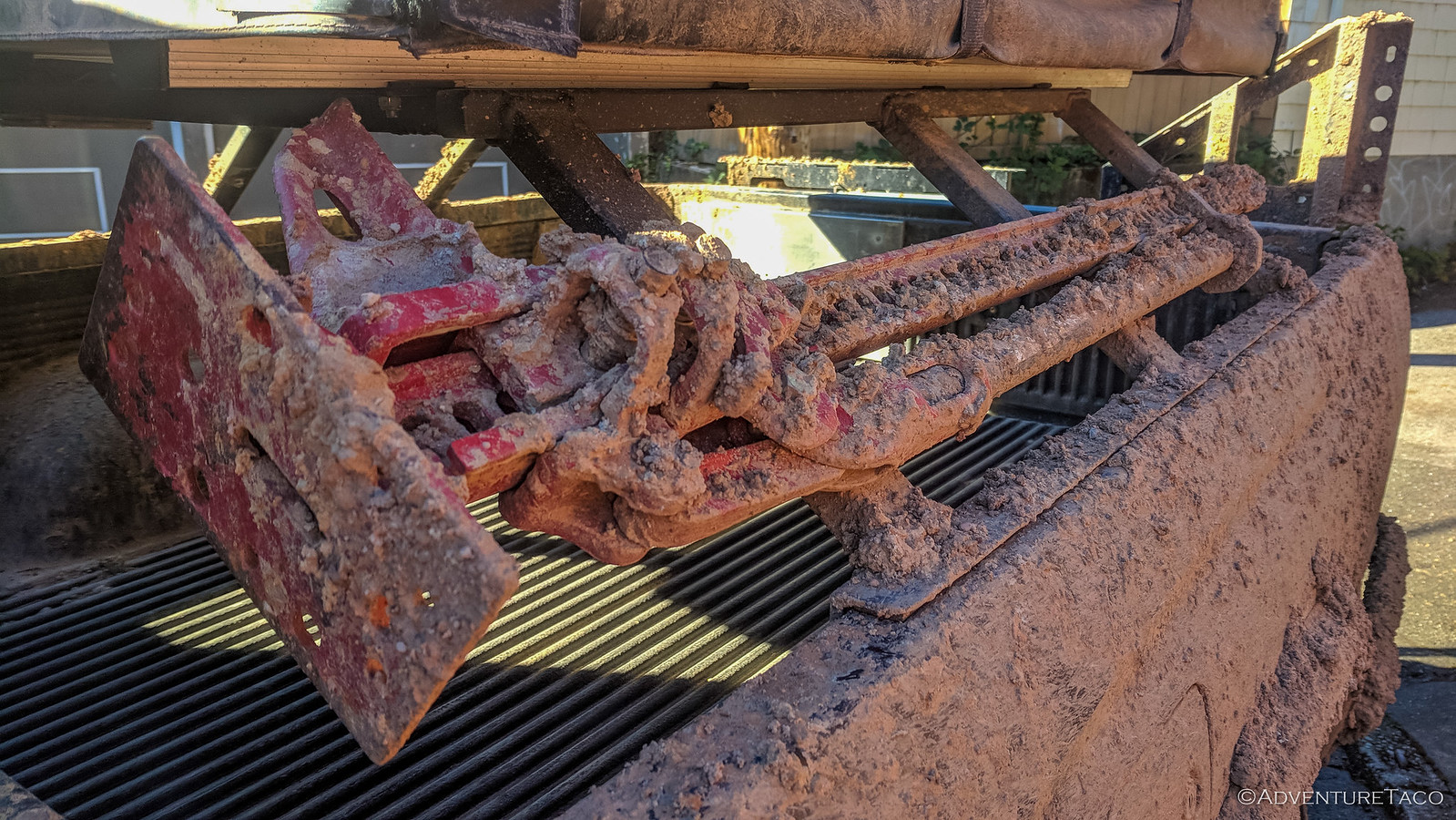 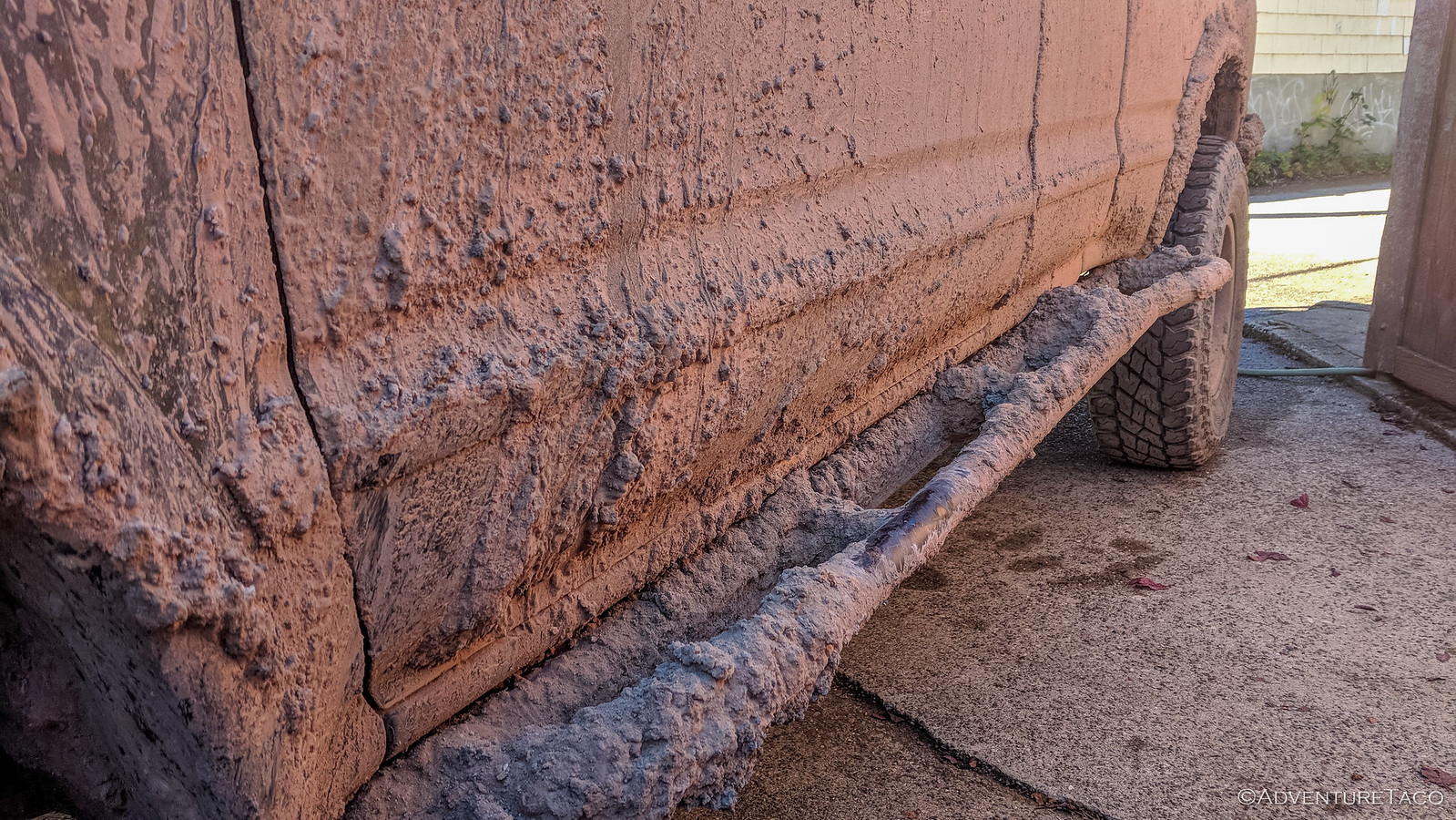 The zipper for the rubber cover got dirty (muddy, not dusty) and that made it really hard to get closed. I'm going to clean it well, and then keep an eye on it over time, since I've never had an issue with it before.