Well, this month has seen a lot of adventuring - Double Fun @ Anza-Borrego and Ruining Around in Utah meant that there was lots of hands on time with a few different bits of the rig, with some interesting findings. I figured I'd write it all up as one Rig Review, since there wasn't much (any in the case of Anza-Borrego) time between trips, and the rig was essentially the same for both trips.

TL;DR - To solve the problem with mud being flung everywhere with my SCS wheels that stuck out past the fender flares, I installed some new-to-me 1999 4Runner wheels on the truck, which sit under the fender flare. This solved the mud issue, but introduced a slight incompatibility with my new ADS front suspension - the tires rub on the shock reservoirs at full lock.

The 3rd Gen 4Runner wheels are already a welcome change to the truck from a functional perspective. Only 7½ inches wide and with 4.625 inches backspacing - a mere 1/8" more than the stock 2000 Tacoma aluminum alloy wheels - they pull the tires inboard just over an inch on each side of the truck as compared to the SCS Stealth6 wheels, which were 8 inches wide and had 3.5 inches backspacing. That inch means that the entire tread - and most of the sidewall - is completely under the wheel well and fender flares; flying mud no longer makes it onto the sides and top of the truck.

For the most part. And from that perspective, they are a huge win. I have even less mud on the truck than Igor does at this point.

Igor on the left, the Tacoma on the right.

However, perfection is hard to obtain, and they are not without their problems. Two have presented themselves so far; one I'd like to solve reasonably quickly.

The Bed is Cracking

TL;DR - I found two cracks in the bed of the truck, likely from the weight of the RTT bouncing around up there. I'll need to fix them and come up with a way to reduce/change the stresses in the future.

Just before our last few trips, I discovered that the bed of the truck was cracking in two places. The first was at one of the locations where the bed rack attaches to the bed rail - a crack had formed along the inside edge of the rail. The second was in the front corner of the bed - between the front and the passenger sides of the bed. 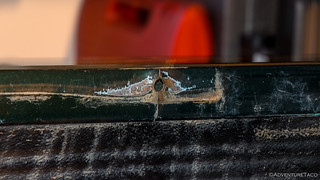 I've got a feeling this is happening because of the weight of the tent rocking back-and-forth (and up-and-down) as the truck goes over rocks. My increasing speed over the last couple years probably hasn't helped the situation.

I think there are two problems - which I obviously plan on addressing.

Stay tuned for work in this area - I've already got a couple solutions in mind and in progress!

Bobby at CVT @Cascadia Tents was able to get a stargazer-less rain fly to me for the Mt. Shasta tent, and that got installed just during the second Anza-Borrego trip. While it didn't rain in Anza-Borrego at all, we did get one night of rain, and one morning of (light) snow in Utah and the new fly behaved exactly how I hoped it would - as the sun came out, it absorbed the heat and dried off nearly immediately.

In fact, even when it snowed a little bit - this fly didn't get nearly as wet as the previous one. 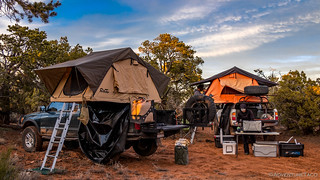 To get the tent all squared away, I purchased some Gear Aid (previously McNett) Zip Care Cleaner and Lubricant. It's probably some expensive scam for what it is, but I spread it on the zipper and it was like magic. I'm not sure how often I'll need to reapply it - but with 2 oz. of this stuff, I've got plenty to last quite a while.

Problem solved. ...And honestly, I don't think that the problem would have solved itself as I was originally hoping - once the zipper gets dirty, it's too hard for it to clean itself. 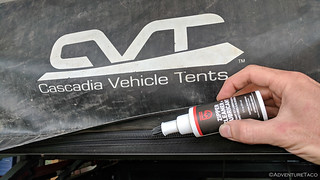 TL;DR - I found solutions for both the wind screens and keeping the bottom of the grill clean of drippings. I really like this stove now.

I added the Coleman Camp Stove/Grill back on the F.U.Rain trip. As I noted, I liked it for the most part, but the securing mechanisms for the wind screens seemed poorly designed. After looking things over, I was able to fix it reasonably simply - I made what turned out to be two popsicle sticks from some scrap maple hanging out down in the shop. These can be inserted into the securing mechanism, making it impossible for the wind screens to dislodge. When not in use, they can just be left on the "floor" of the burner, so they pack along with the grill. 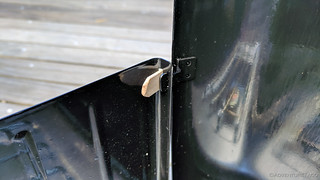 I also made a second tweak to this setup, which I'm really liking. When using the grill side of the stove, juices from burgers, steak, etc. would drip down onto the bottom of the stove and were hard to clean up (and over time make the kitchen box stink). So, I gave it a thorough cleaning and then lined the bottom with some aluminum foil. Works a charm to catch all the drips, and then at the end of the trip, I simply toss the foil liner. 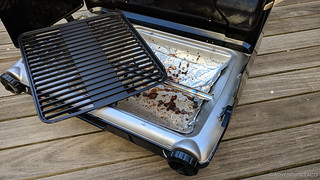