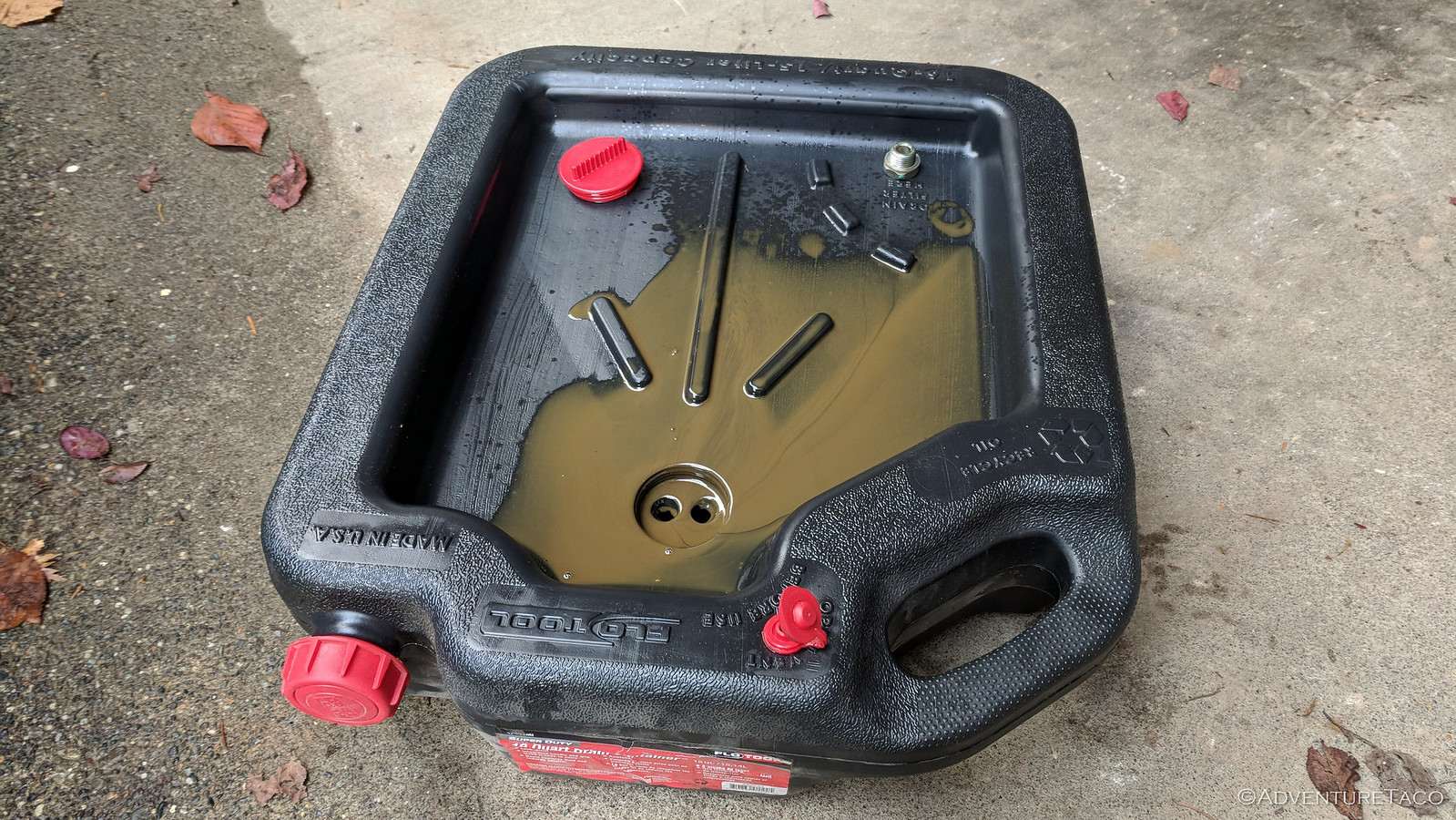 This is a long, wordy post. Sorry, and enjoy the story.

As we drove the several-hundred-miles to eastern Oregon on our recent trip to Owyhee and the Alvord Playa, all was not well with the Tacoma. Four times - each time after three uninterrupted hours of driving - there would be a sudden sound of something that sounded like a bearing "spinning up." The sound was disconcerting enough that I'd immediately take my foot off the gas, and the sound would slow - eventually ending in a clunk and everything would be "back to normal."

Everything that is except my nerves.

Obviously, we continued on and the trip was a huge success - but as we did, I posted several questions to fellow Tacoma enthusiasts on TacomaWorld - hoping to further debug the situation and understand what was going on. There were of course a ton of ideas thrown out - including wheel bearings, u-joints, AC idler pulley, transmission, transfer case, differentials, and the center bearing - but what I was after were the things I should look or listen for to narrow down the culprit.

The best suggestion from this perspective was to listen and determine if the noise changed with engine speed (RPMs) or vehicle speed (essentially MPH) - that would tell me if the problem was in the engine itself, or if it was in the post-engine drive train (transmission, transfer case, diffs, etc.)

So the next time it happened, I put the clutch in neutral and reved the engine. Then, I put it in 3rd, 4th, and 5th gears (slowing from highway speed) - and without a doubt the sound was related to vehicle speed and not engine speed.

And for some reason, my gut told me it was the transfer case.

The remainder of the trip, I made sure to proactively re-engage 2HI, 4HI, and 4LO every 90 minutes or so of drive time, shifting the transfer case into neutral and then firmly into the appropriate drive mode. Low and behold - the sound never returned.

I was relieved about that, but also worried. What could possibly be wrong? I had no idea, but something clearly was.

So, upon my return, I wrote up everything I could about the issue and headed to the most reputable Toyota dealer around. Here's what I told them (just in case the internets can help someone else in the future searching for something similar).

What happens?
While driving at highway speed (so far, for a prolonged period of time - ~3 hours), there is suddenly and randomly a whining noise that sounds like a bearing spinning much faster than it should be. Loud enough to be heard in the cab. Spinning continues for 3-10 seconds (varies) and slows down as the vehicle slows down. Spinning ends with a "clunk" sound and vibration in the drive train. Recording attached.Has happened 4 times at the following speeds:

Engine or drive line?
I believe it's in the drive line, since whenever it happens, I press in the clutch. Engine revs drop at that point, but whine seems to be consistent with vehicle speed. To test this further, I shifted into 4th, and 3rd gears while the whine was present, and it's pitch did not change as I maintained a constant speed, though the engine revs obviously did.

Where is it coming from?
Seems to be coming from the "front" of the truck - I'd say from the front seats forward. Sounds like from the dash to me, but could be below the dash (tranny, tcase).

What does it sound like?
If I had to describe it, to me it sounds like either:

Then, as the speed slows (with the speed of the vehicle), whatever component started spinning suddenly "pops back into the correct position/place" with a clunk. Then, everything is normal again.

What does the clunk sound/feel like?
The best way I can describe it is similar to the "clunk" you might feel in the clutch if you let it out too quickly at the very beginning or tail end of the engagement travel.

How to prevent the behavior (maybe)
After this happened, I thought it might be the transfer case. Every 100-150 miles or so (at 62mph), I'd stop the truck, put it in neutral, and use the j-shift to switch deliberately between 2wd and 4hi (and sometimes 4lo), listening for the "click indicating engagement." I'd then switch back into 2wd (deliberately) and carry on driving. Using this methodology, I drove 12 hours without experiencing the issue.

Does 4wd seem normal?
It seems to work just fine (both LO and HI) 4HI may be slightly noisier than it's been in the past - there seems to be an underlying tick-tick-tick now that I don’t recall being there before. And I use 4wd quite a lot - on the order of 10K miles in the last 12 months.

Well after leaving the truck overnight, I got a call from the service department. Having not done any work at all, they suggested that the best course of action was to do nothing, for now. Rather, they suggested that I should wait until the problem got worse - easily reproducible - and then bring the truck back. Otherwise, they would have to spend hours (driving at freeway speeds) simply trying to reproduce the problem, before they could even start trying to figure out how to fix it.

Honestly, I was a little stunned that with all the information I'd provided, that they didn't have an idea of where to start, but I agreed - it didn't make sense for them to spend hours driving around at 62mph just waiting to experience the whine for a few seconds. So I drove the truck home.

I was still worried.

Ultimately, I figured that now was a good time to go through and change the oil in all of the various oily locations on the truck - it was pretty much the end of the year, and so a good time to get everything ship-shape for the next year. Plus, I figured that looking at the oil from each of the transmission, transfer case, and diffs might give me a clue as to where the problem was - I mean, if a bunch of metal shavings spilled out of one of those places, well...I could probably start there.

I started with the transfer case. Keen to catch any "glitter," I slowly opened the drain plug into a coffee filter. As soon as oil started coming out, it was clear that something wasn't quite right. The oil looked like mud - a light brown goop that definitely didn't belong in my transfer case! 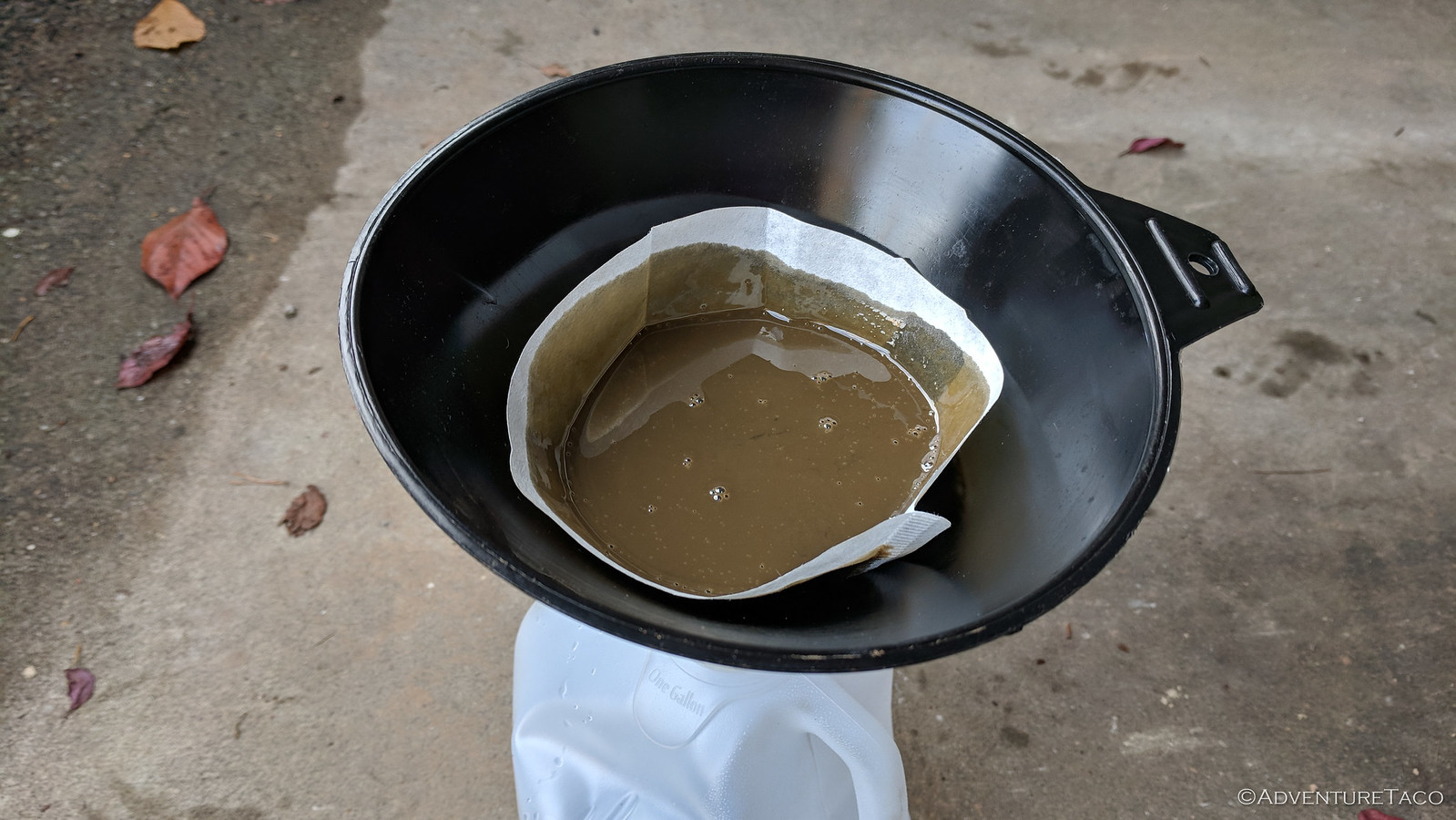 The filter full, I drained the rest into my catch pan and then waited for the filter to drain before opening it up and looking for metal. Luckily, there was none. 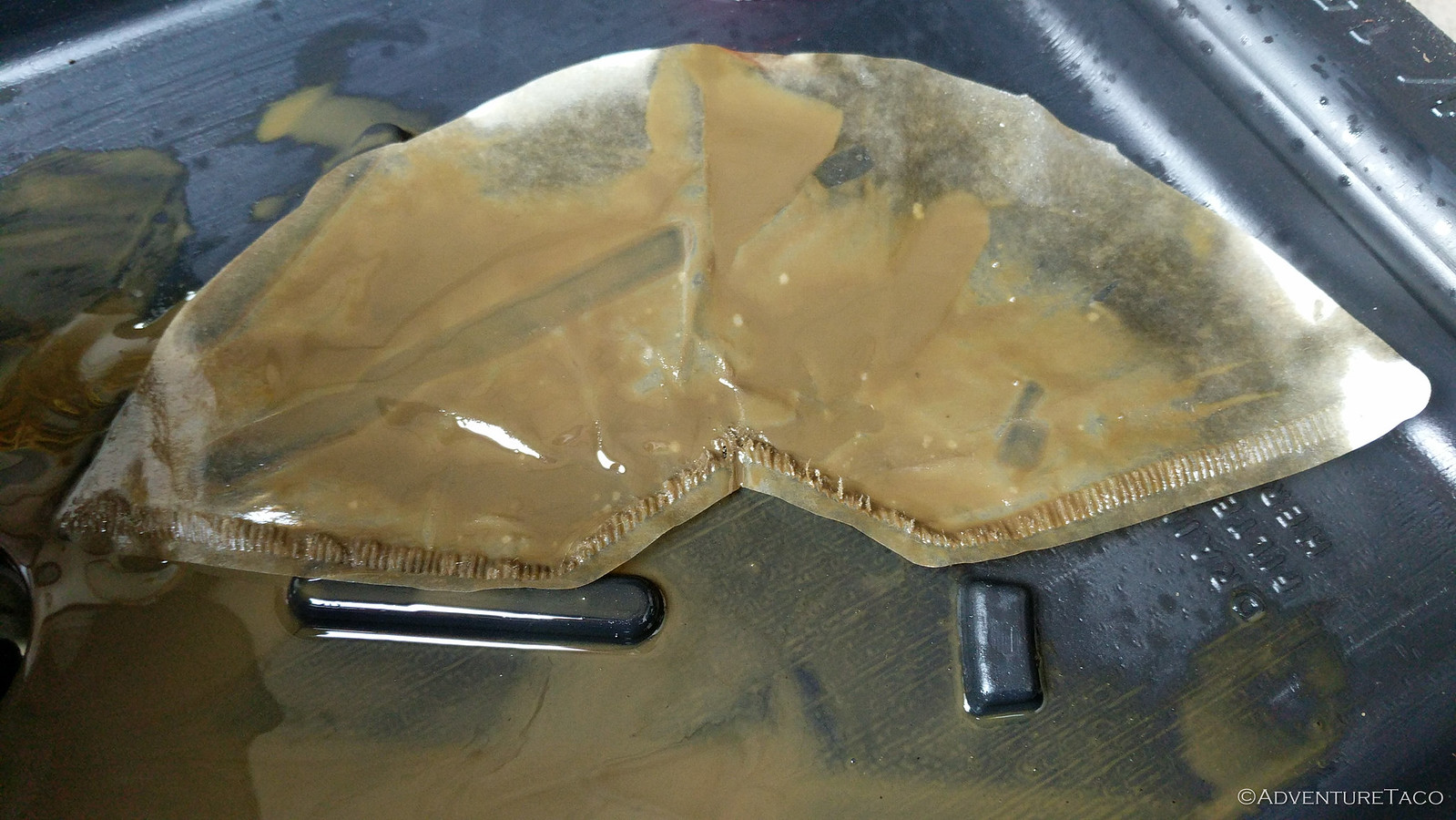 Whenever it had happened, I decided to let it continue to drain while I changed the oil in the transmission. The process here was the same - filter the used oil through a coffee filter, looking for metal. 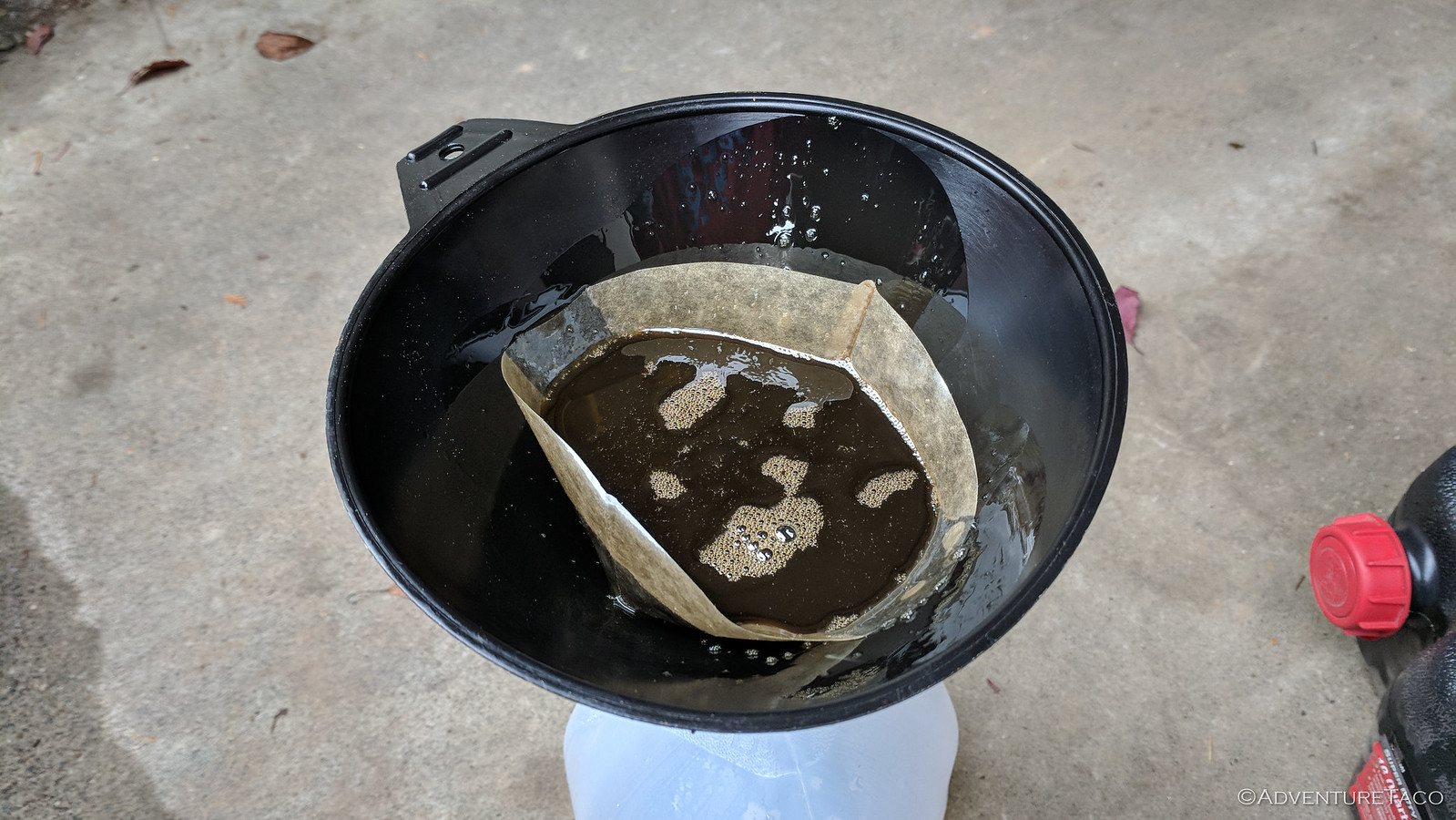 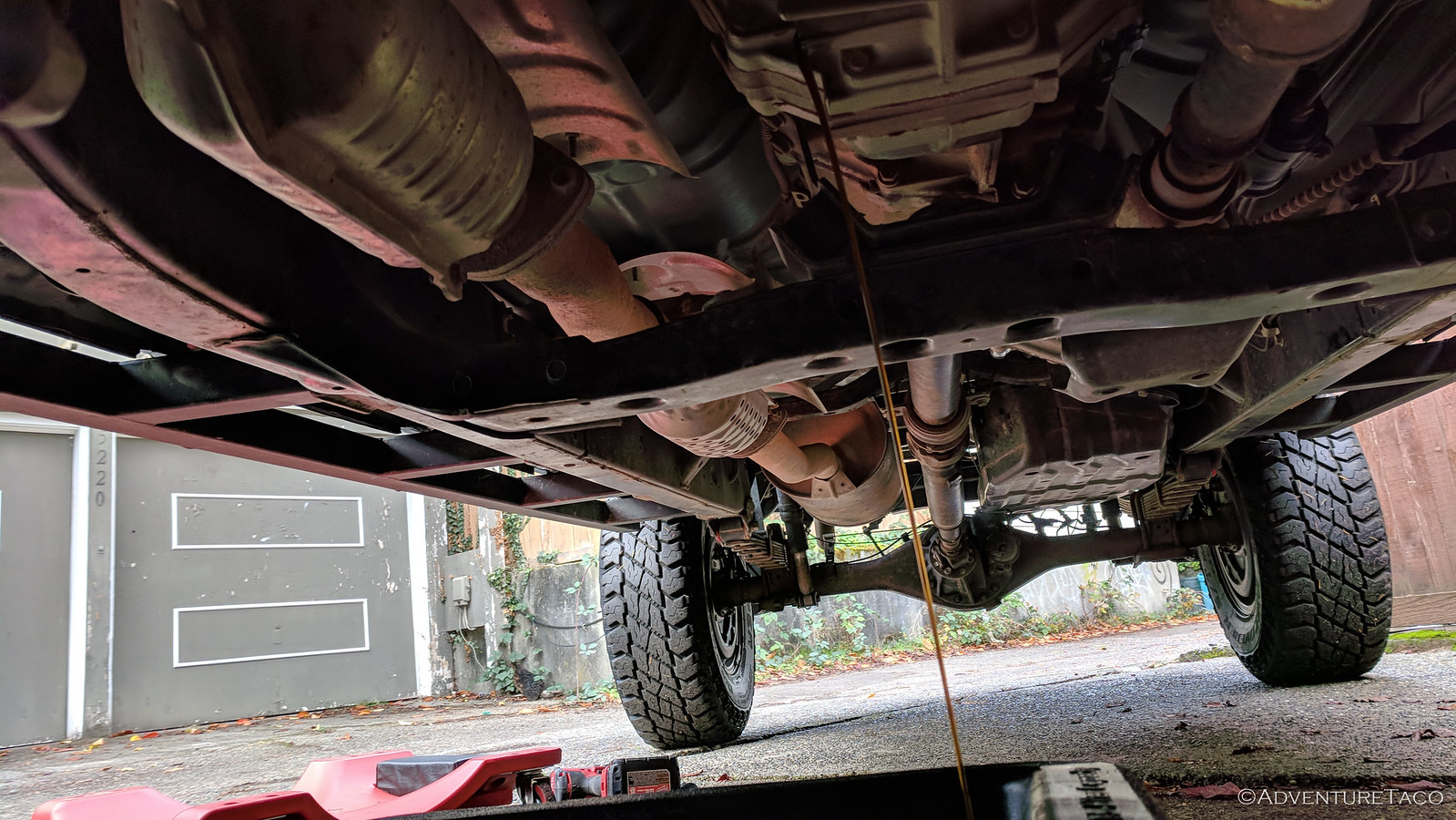 Again, as with the transfer case, once I filled up the filter, I drained the rest into my catch pan. This time, there were a few flecks, but nothing to be worked up over. And the oil was obviously used, but was a much better color. 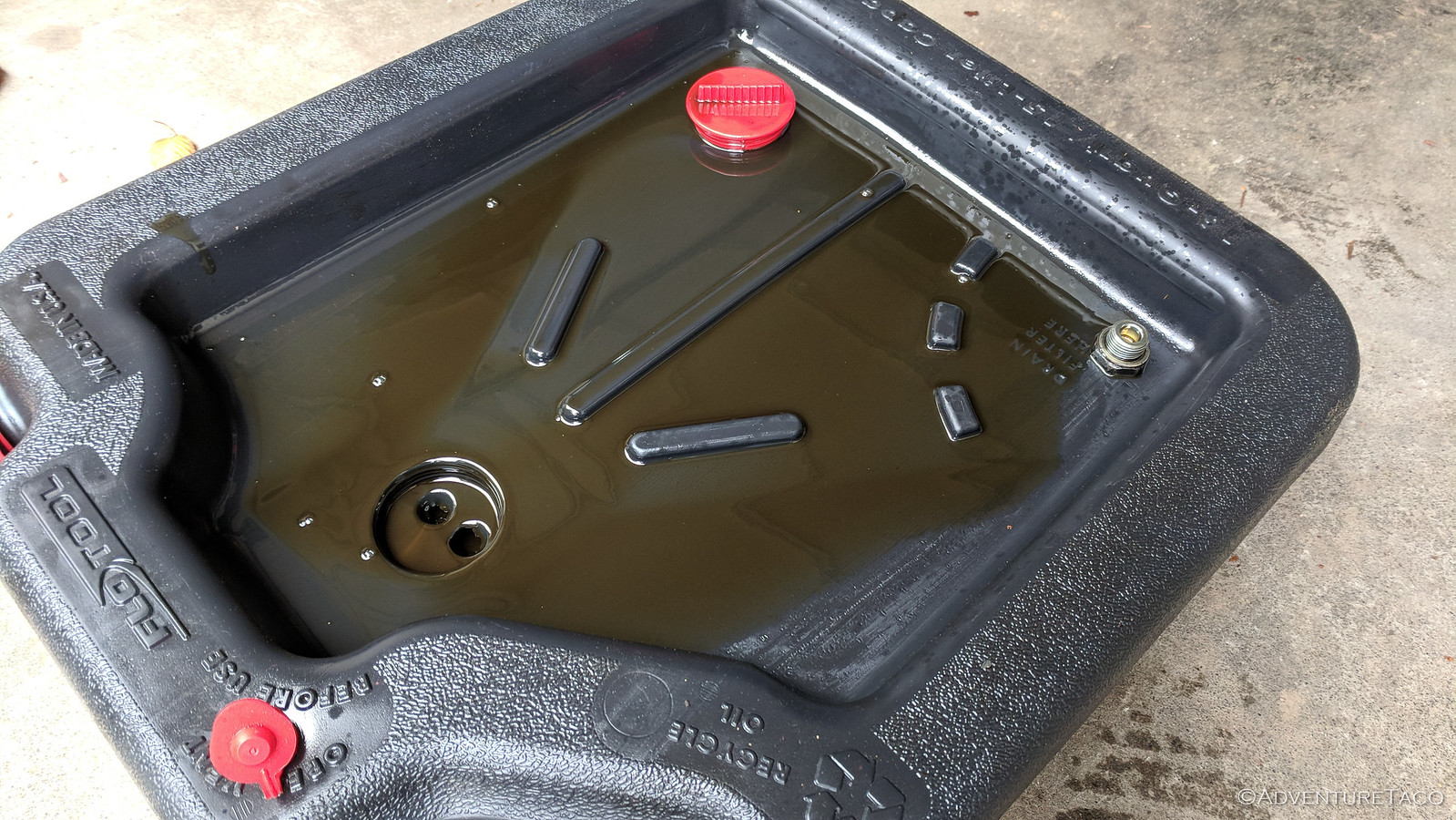 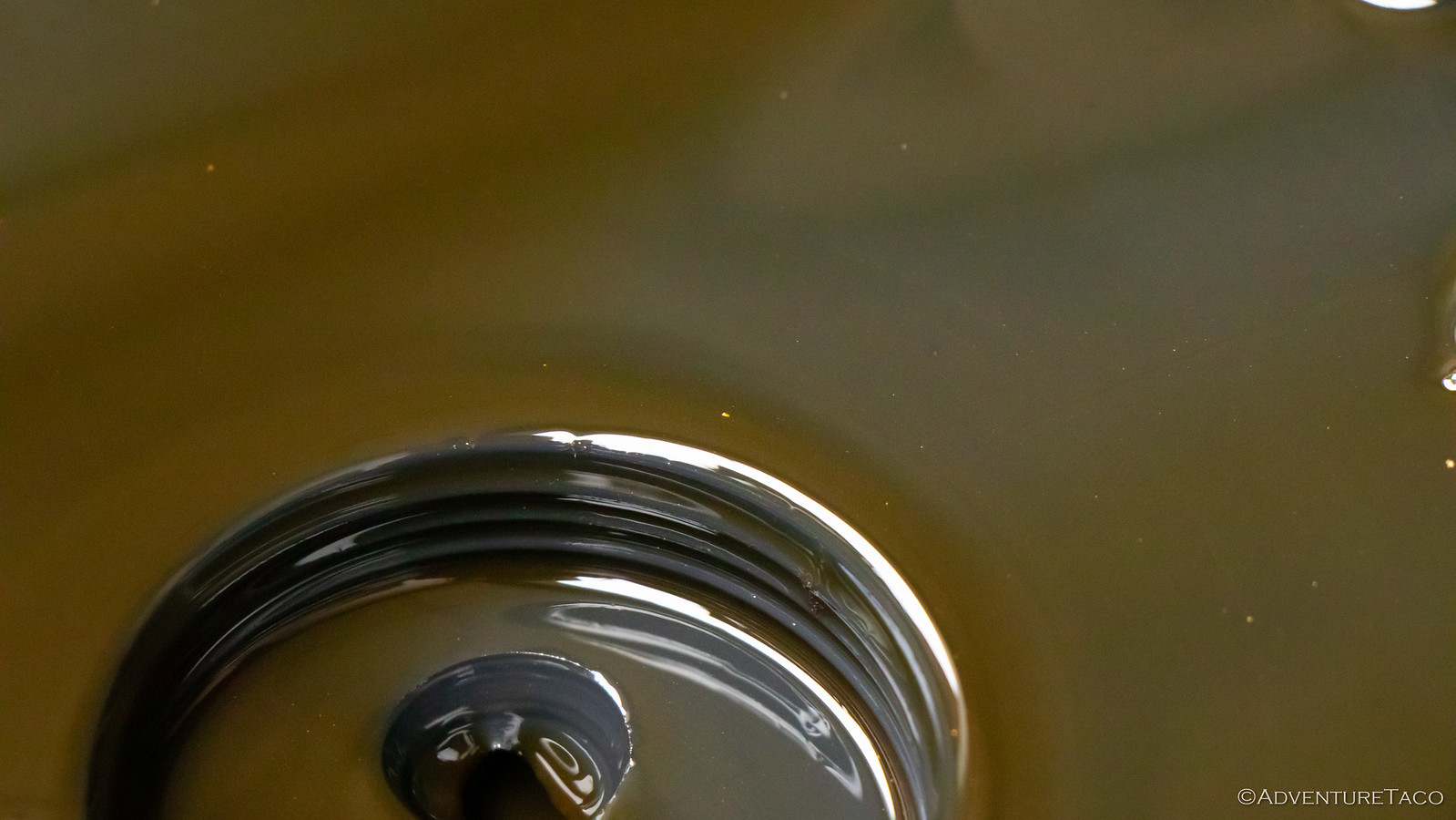 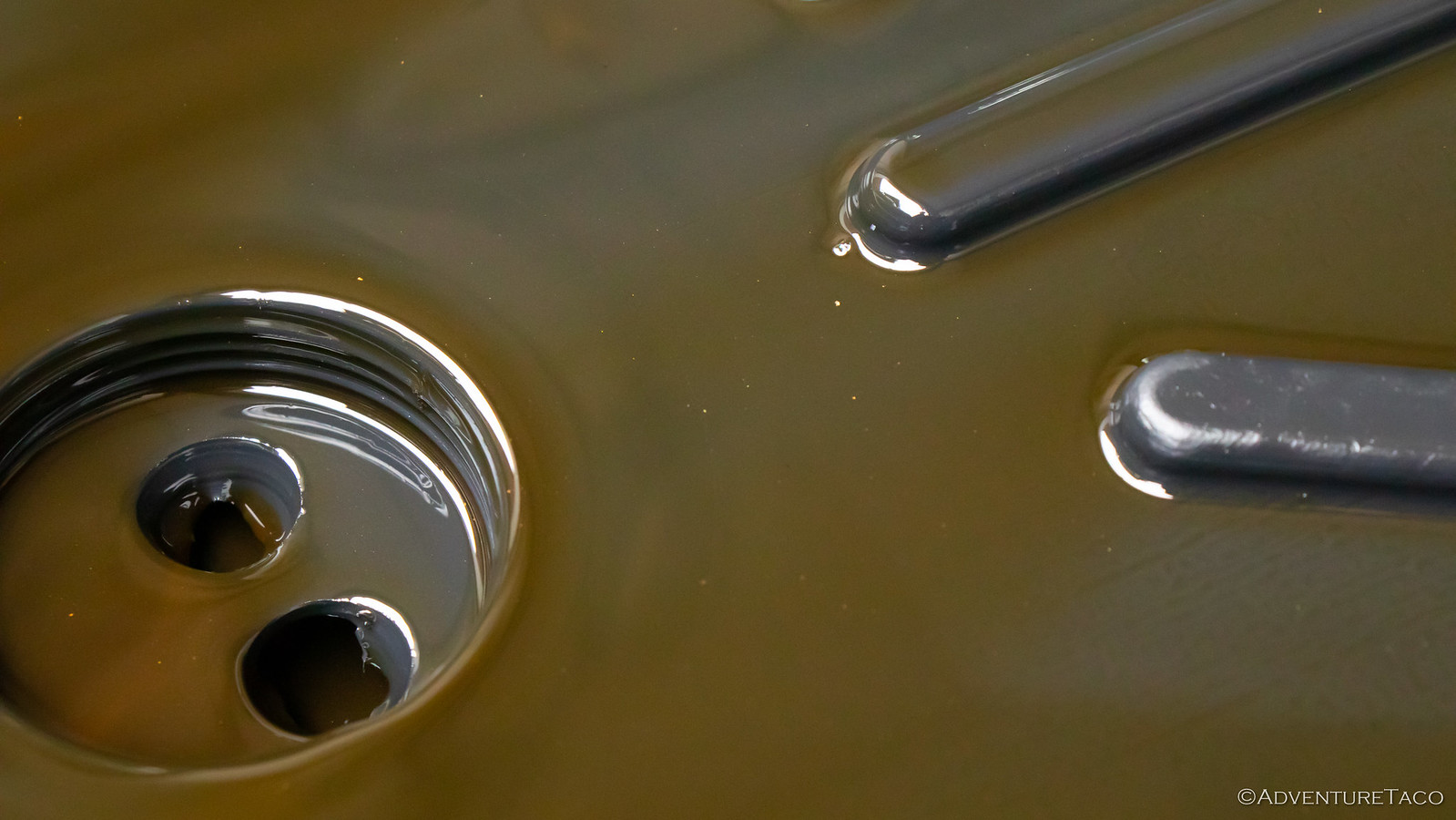 Everything drained, I refilled the transfer case (with Lucas 80W-90) and transmission (with MT-90) with new oil and closed everything back up. Diff and engine oils were changed next, uneventfully.

And then, it was time to wait and see. Had my gut feeling that the problem was in the transfer case been right? Was it the water-saturated oil that was causing something to not be lubricated quite right and "fall out of place" and start spinning? Only time (and miles) would tell.

After the 2,700 mile trip, I changed the transfer case oil again - for two reasons:

No coffee filter this time, I drained a bit of the oil into an old pie container just to compare its color to that of new oil - definitely dirty, but nothing like the mud from the first time. 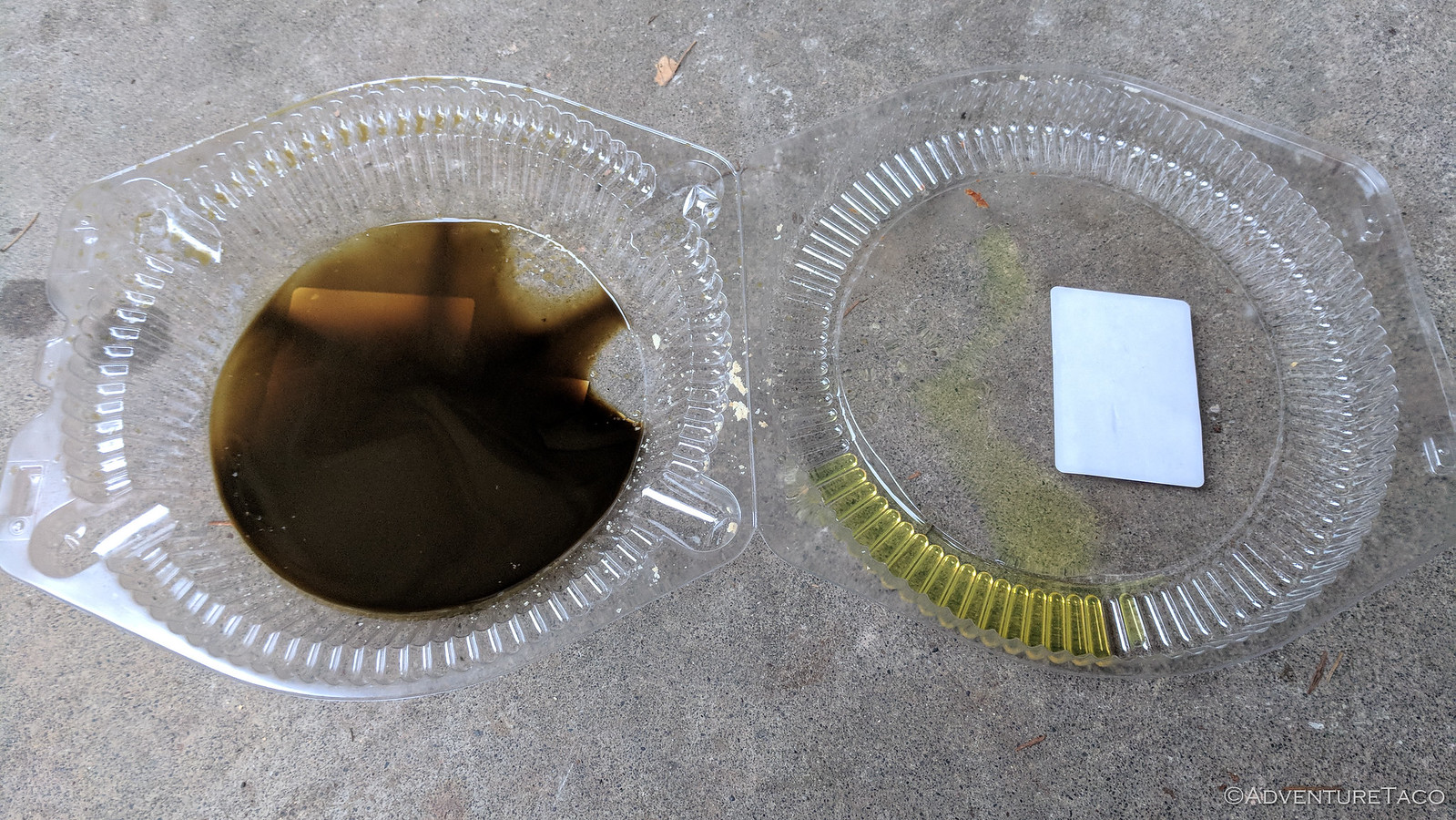 So, here's to continued hope that I found the problem...and that the horrible noise never reoccurs.

Update: December 15, 2021 - Since this problem happened, I've put 100K miles on the truck, and had no more issues with the transfer case until it failed on my Back for More trip to Death Valley (see Beginning of the End and Just Like That, It's Over), and I've captured the entire saga of the transfer case in this series of posts:

The Saga of the Transfer Case

Published in Tacoma Maintenance; experienced on 2018-11-15